COUNTDOWN: 12 gimmicks that no Masterpiece Optimus Prime has featured so far 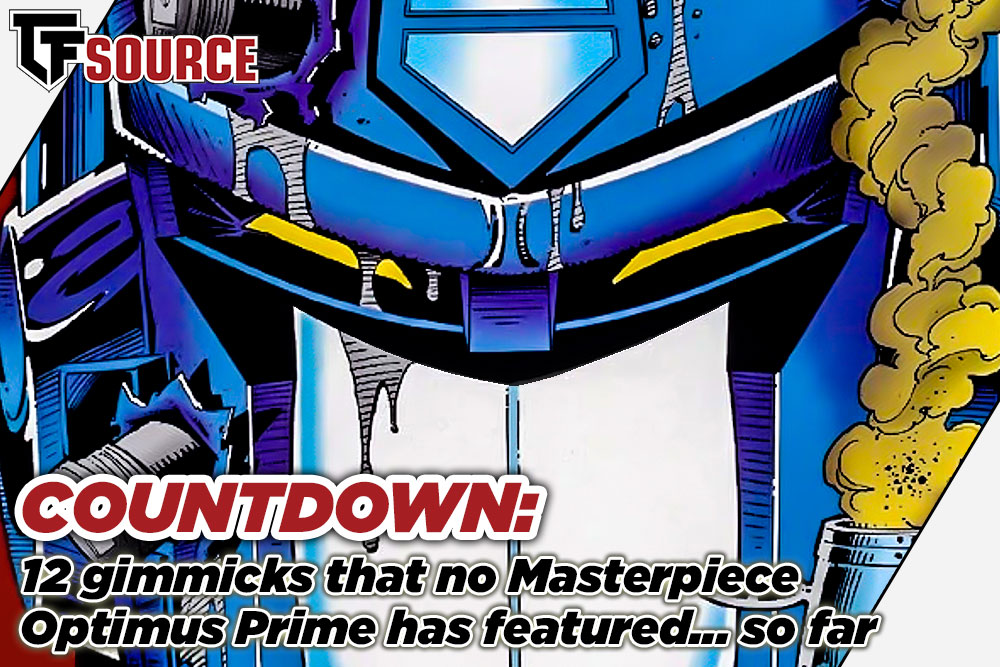 Can you believe the Masterpiece line is now 16 years old? That’s a lot of years! In fact it’s now the longest running continuous line in Transformers history, and of course recently released the third version of franchise MVP Optimus Prime.

So if we assume that we can expect a new MP OP every 5 and a half years, we should be due another one by about 2024 or so, and no doubt plenty of re-releases of MP-44 in that time. But hey, what’s even left on the table for potential OP-related gimmicks anyway? As we recently covered in another Countdown article, MP-44 features a wealth of accessories, so between that and the two previous toys surely there aren’t many homages left to mine? Well, think again! Here are 12 gimmicks that no Masterpiece OP has featured… so far!

One quick note to say that for this list we’re trying to consider gimmicks and accessories as opposed to just new versions of OP himself. So whilst it would be cool to see a blue Powered Convoy version at some point (and boy, would it), that’s not where we’re going for today. We do mention a few trailer options though!

Oh, and some spoilers ahead for the Generation 1 cartoon and comic, by the way. 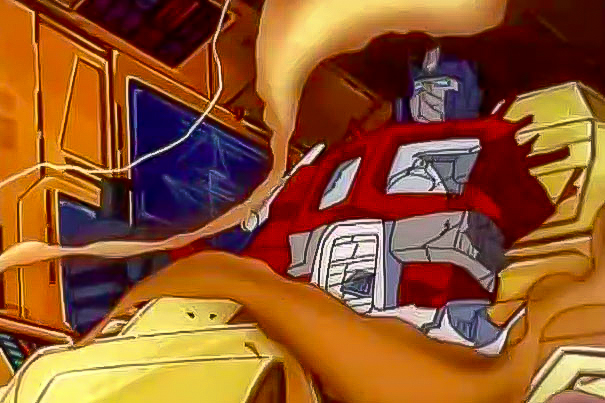 Kicking off this list is something truly haunting! If you grew up in the ’80s and saw the classic cartoon episode Dark Awakening then you’ll definitely have had nightmares about zombie OP at some point! The story is a direct follow up to the 1986 movie, and sees the Quintessons having reanimated and reprogrammed Optimus for their own gain. He ultimately beats their nefarious influence, but only by sacrificing himself all over again (or so we think…), getting seriously messed up in the process. He spends a fair portion of the third act running around missing an arm, but then ends up losing half his face too. Yikes!

So in conclusion we’ve had three Masterpiece Optimus Primes and not once have they been brave enough to give us the zombie face from Dark Awakening, the cowards. pic.twitter.com/MFnqU9q3Uf

MP-44 might have given us the battle damage from the movie, but it would really be something to see this level of extreme body horror applied to a toy of this kind, especially as the image is still so memorable for fans who grew up with the cartoon. It’s doubtful that TakaraTomy would ever go there, but just imagine… 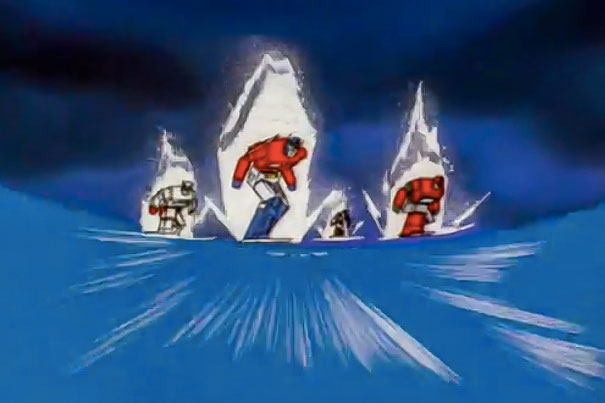 If ever you needed a reminder of how silly the original Transformers cartoon could be at times, just observe these images of the Autobots riding surfboards and attempting to ride a tidal wive from The Ultimate Doom. Classic. Whilst you’re at it, just imagine how much fun it would be to see this as a Masterpiece OP accessory! 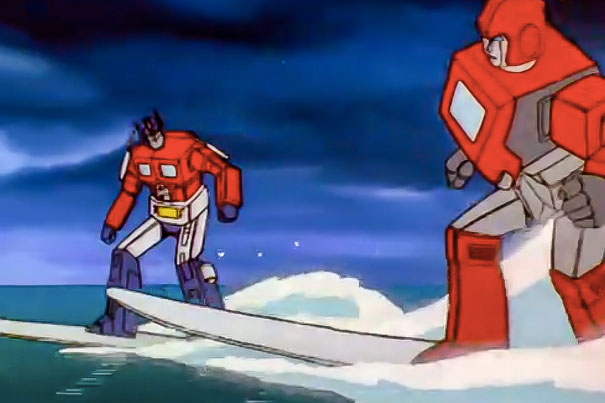 Hey, they could even include other surfboards for Ratchet, Ironhide and Bluestreak whilst they’re at it! Oh, and Jazz if they ever, y’know, make him. 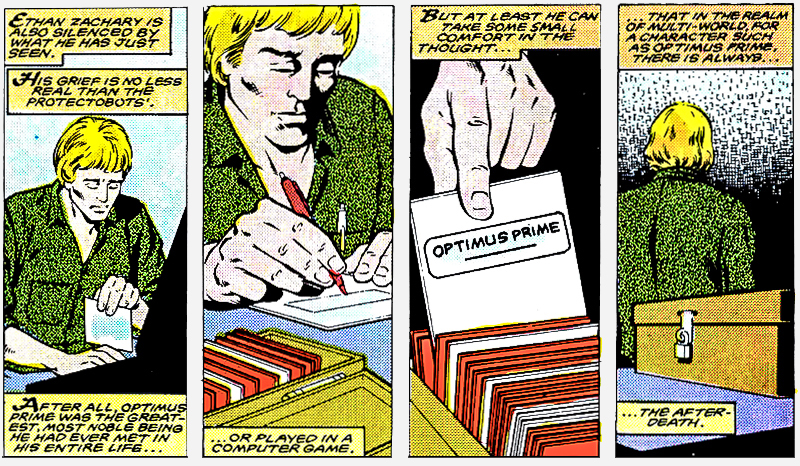 If anyone asks what a floppy disc is then I’m just gonna go back to bed, ok? Needless to say they were *the* method of data storage back in the 1980s, and were even deemed powerful enough to house the mind of our favourite Autobot leader in the classic comic tale, Afterdeath!. After Optimus is killed (again!?) inside a computer simulation, it transpires that his consciousness has been downloaded and stored by human ally Ethan Zachary. It all leads to his eventual resurrection (obvs), but in the meantime he ends up being stuck thinking he’s a computer game character despite Zachary’s best attempts. 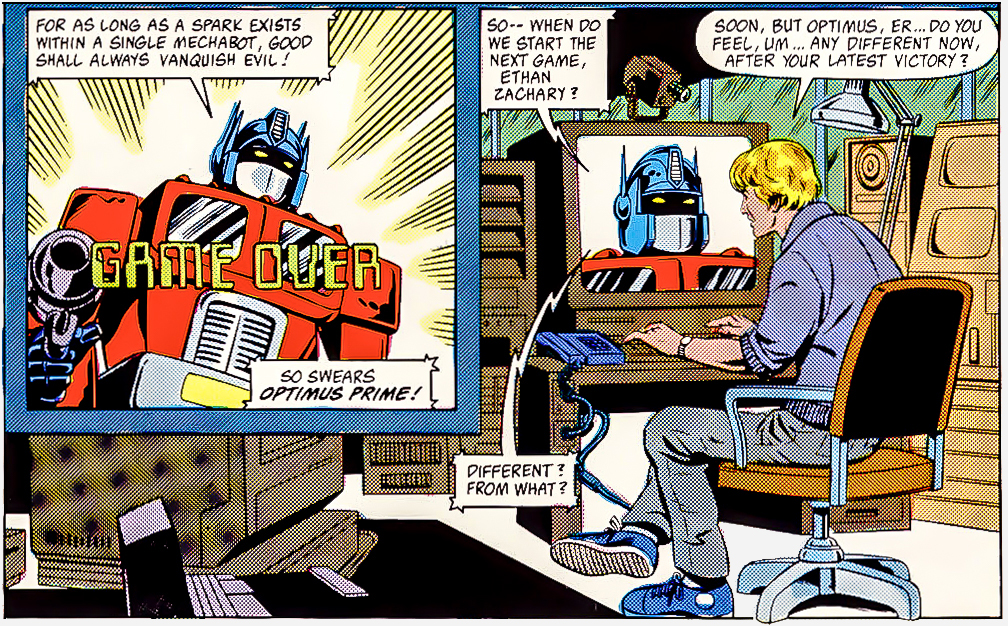 There’s plenty of potential gimmicks to include here, from the floppy disc itself (which is technically Optimus’ body at this point, no?) through to his face on a mini-computer screen and even an Ethan Zachary mini-figure itself. 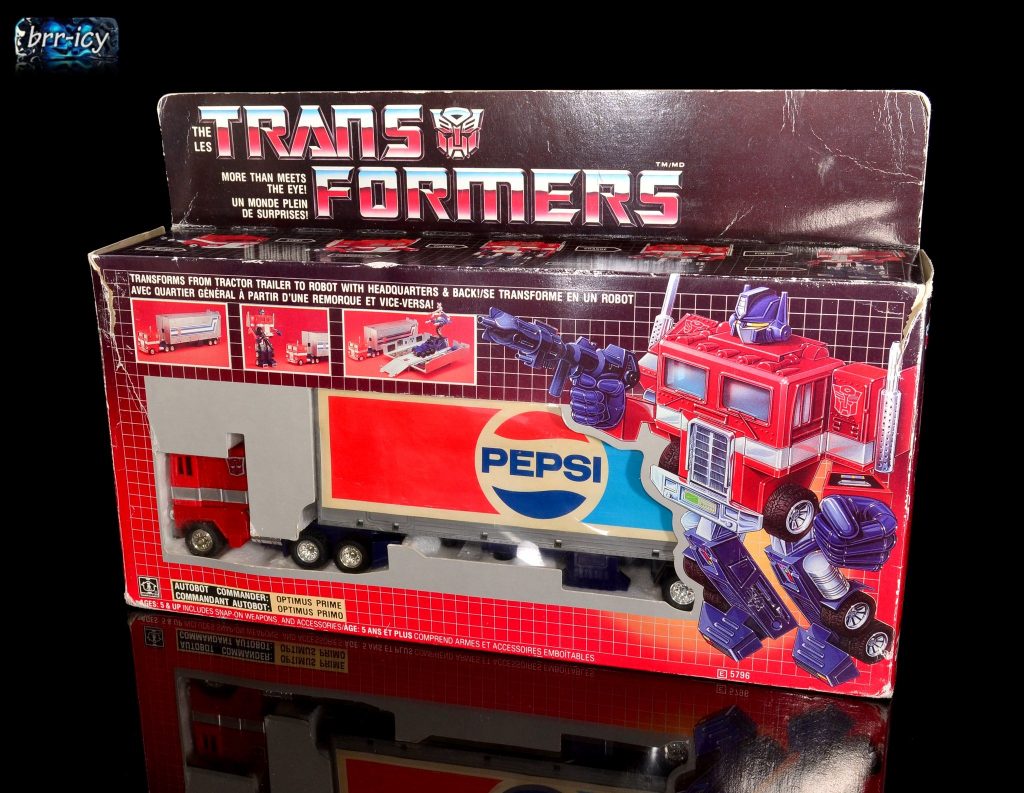 In 1985 there was a limited edition version of the classic OP toy with Pepsi branding on the trailer. It was only available as a mail-away exclusive and is a rare thing to find these days. The US version featured fairly small stickers but the Canadian variant (seen here) went all the way with a full-on Pepsi-themed trailer. So memorable is the idea of “Pepsi Prime” that Hasbro even released a new version much later in 2007. 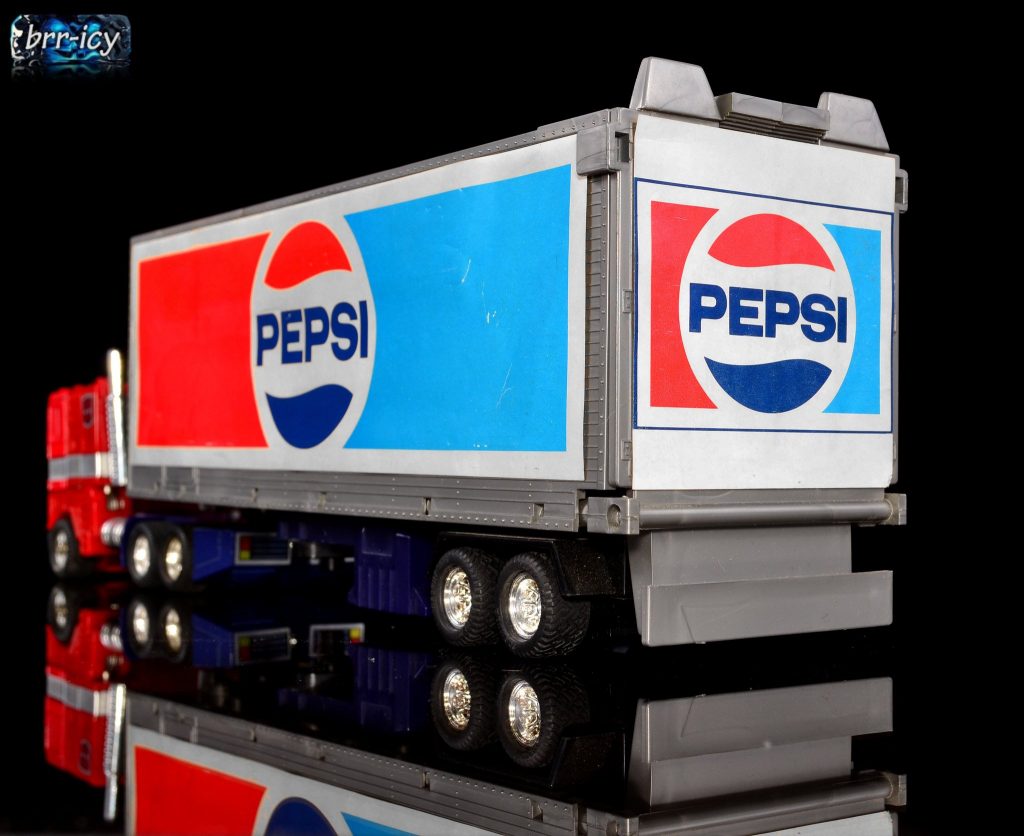 It would obviously require some sort of licensing deal, but given Pepsi have been happy to be associated with Transformers in the past we’d love to see something like this come to fruition for a future Masterpiece release!

Big thank you to Brr-Icy for granting us use of his wonderful photos! 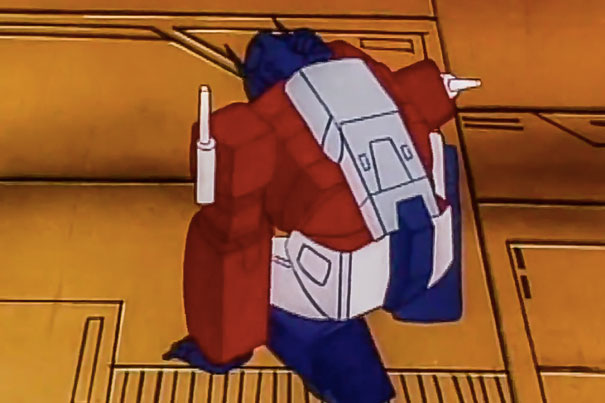 Pretty simple this one and perhaps even a little obscure, but who doesn’t love a homage from The Rebirth? The 3-part final-ever episode of the original Transformers cartoon is for many fans one of the most memorable capers from the series. Optimus, back in full leadership duty at this point, has presumably had a bit of a makeover as he’s now sporting a noticeable white backpack instead of his signature red. It’s a small detail but one that plenty of fans have noticed over the years and would be fun to see recreated somehow. Sure, it’s likely all just a result of duff animation, but hey, they already gave us a weirdly-coloured Hot Rod with MP-40, right? 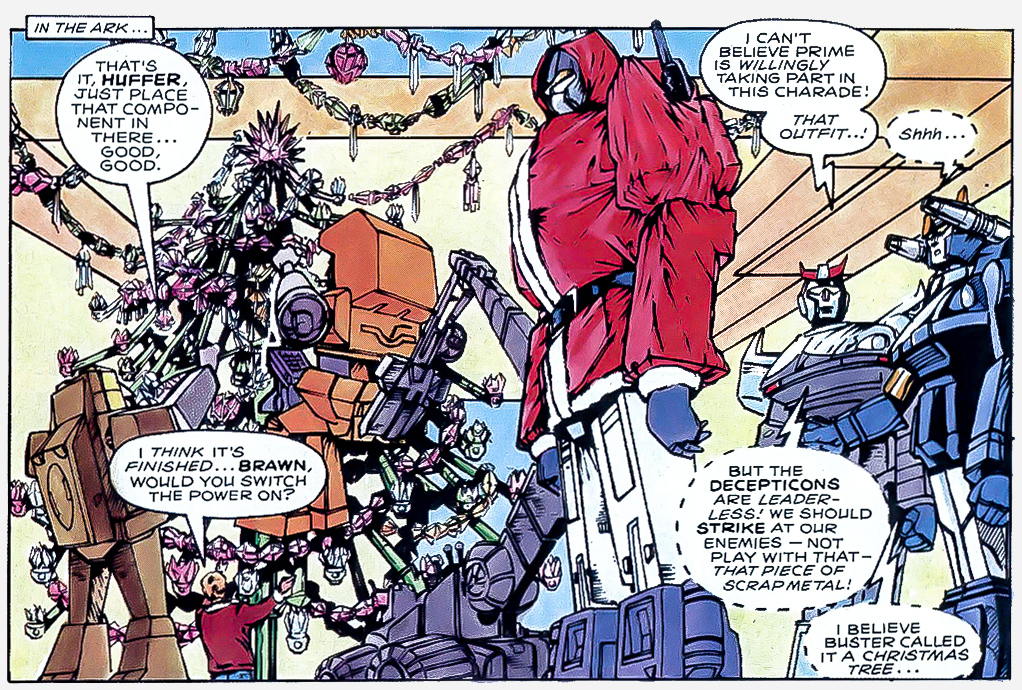 Oh, c’mon! Who wouldn’t want to see this? This panel is from the classic tale Christmas Breaker, featured in the Marvel UK comic #41. Optimus is doing all he can to make Buster (the comics’ human ally for the Autobots) feel at home and so has the Autobots set up a Christmas tree and even gets into character himself by dressing up in a massive Santa outfit. We’ve no idea who made it for him, but it’s really quite fetching and could be a very unique addition to a future Masterpiece release! Hey, we’d love to see a tree accessory and even a Buster mini-figure thrown in for good measure! 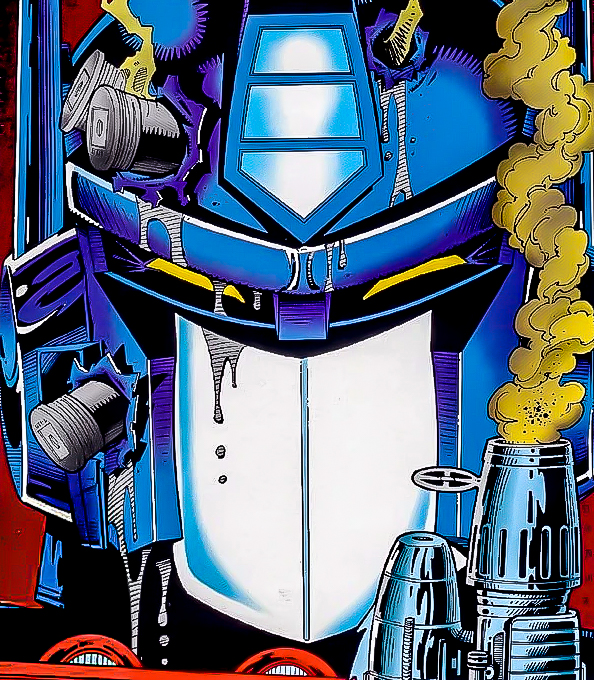 The cover to Generation 2 #1 is one of those things that if you were around in 1993, you’ll definitely remember seeing for the first time. The image of a battle-hardened Optimus with BIG GUNS and bullets lodged in this head was not quite what we were used to for the previous Marvel series, but it certainly made an impression! Needless to say all of G2 is rife with potential Masterpiece gimmicks, and could include ridiculously-oversized weaponry, battle-damaged parts or perhaps even just *that trailer*. Given we’ve already had MP versions of G2 Sideswipe and Bumblebee in the past, how much fun would that be to see? 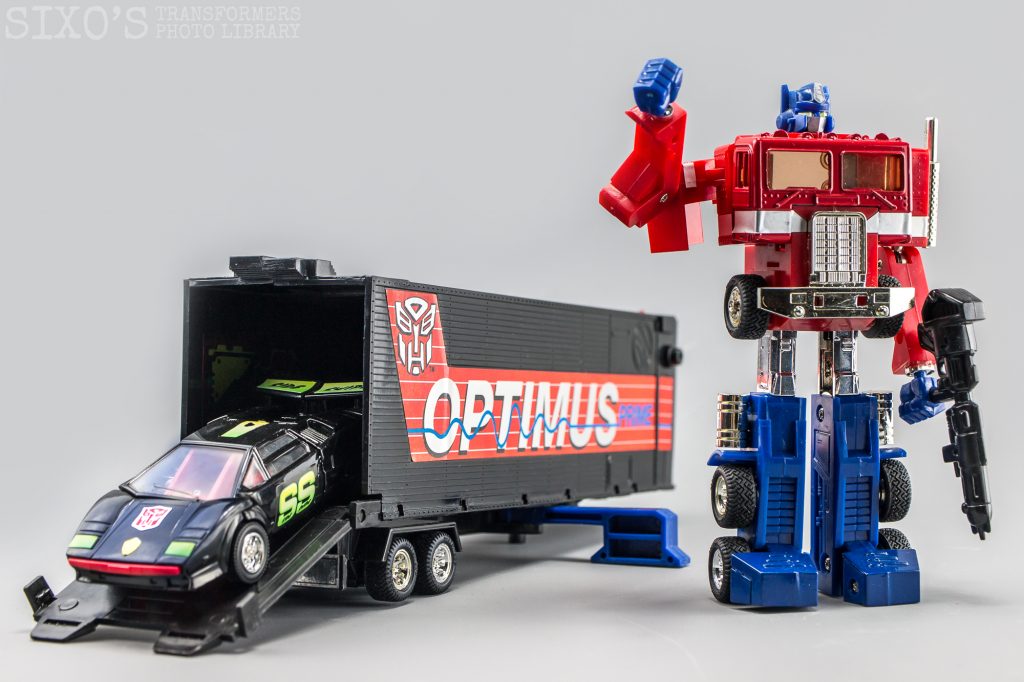 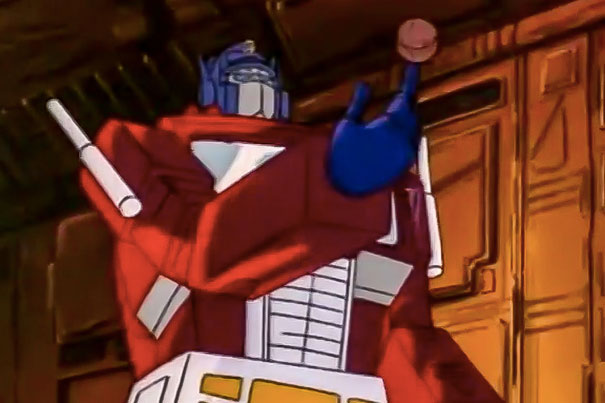 Did you know Optimus can dunk? ‘Cos he can! Yes, in the original cartoon episode The Master Builder, OP gets plenty of chance to debut his sick basketball skills (even if he can’t quite get the lingo right). It starts off with him having a bit of fun with Spike with what looks to be a regular sized basketball, before we later see that the Autobots have built themselves an appropriately-scaled court and everything. 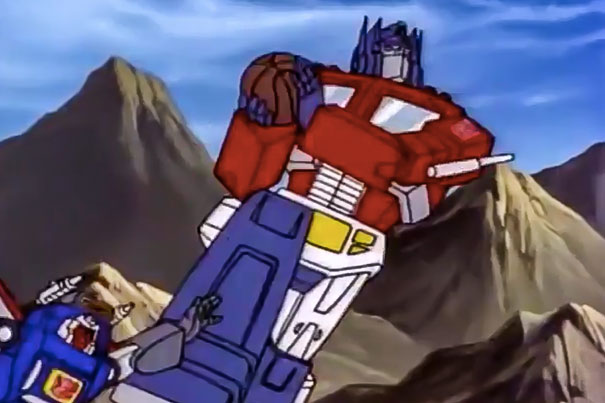 A lot of people (myself included) would have loved to have seen a basketball accessory with the release of MP-10ASL Atmos Safari Lebron Convoy, given that it would have fitted so well with the theme of that toy. It’d still be great to see a future MP OP come with something similar though, if not the entire court! 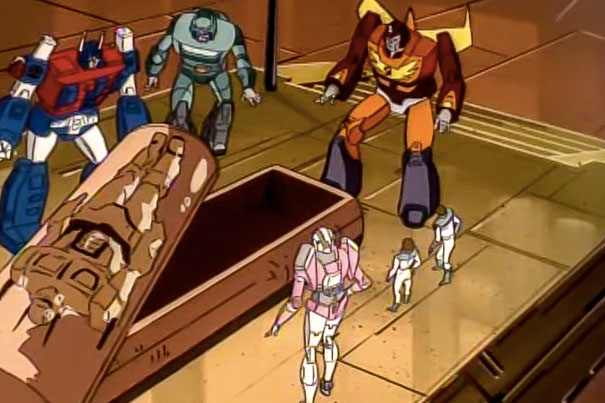 I say “tombs” plural as he’s had so many of them! Firstly there’s another potential Dark Awakening homage to be had, as we see OP’s empty coffin pretty early on in that cartoon episode. However if that doesn’t take your fancy then it could be the more-contemporary-styled tombstone from the Marvel UK comic story Resurrection!, as shown below. Of course the irony in that storyline is that OP isn’t actually dead – everyone on Earth just thinks he is, until he is “resurrected” at the end of the story, before being killed for real just two issues later. Sheesh! 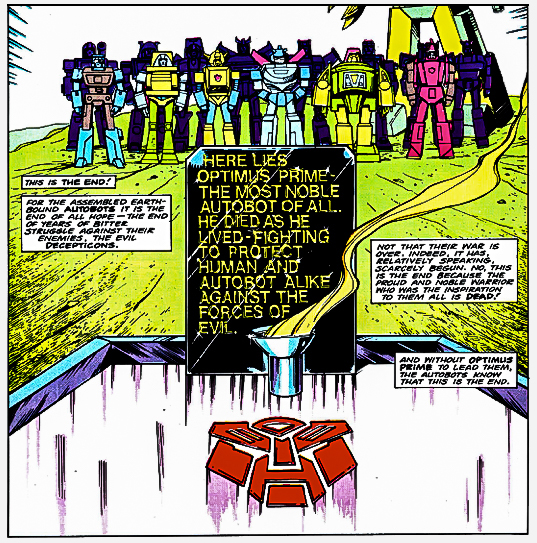 Anyway, we’ve already had a “sleep mode” homage to Optimus’ death in the 1986 movie (with MP-4S), so it could be fun to see one of these other examples given a go… maybe? 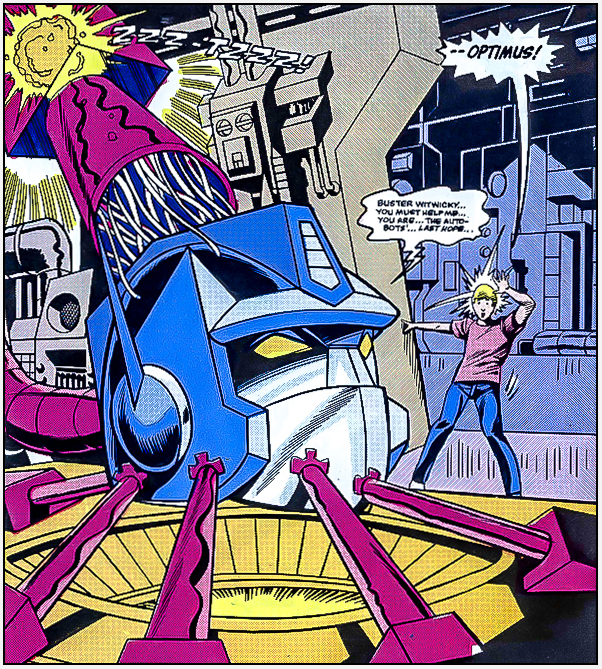 Hey, it’s from that one Marvel comic everyone will know with the Shockwave “…are all dead” cover! In any case, it’s all pretty bleak, as the Autobots have been roundly defeated and left strung up by Shockwave. Even worse, Optimus has been decapitated and his head has been connected up to all kinds of weird machinery in an attempt to create a new generation of Decepticons by using the Creation Matrix program within him. Needless to say it all works out in the end, mostly thanks to Buster, who ends up having the Matrix installed in his brain! Anyway, given that MP-44’s head is already detachable we think there’s plenty of opportunity here to create something fun for a future MP release. Oh, and another great chance for that Buster mini-figure, eh? 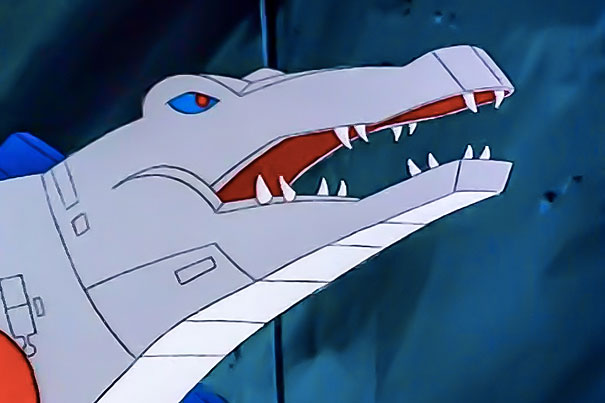 BEAST WARS! Er, kinda. But yes, that’s really Optimus Prime. It all happens in the cartoon episode City of Steel where, in a rare moment of victory, Megatron has defeated and captured our hero. But instead of finally destroying him he dismantles him and turns him into an alligator, as you absolutely would in such a circumstance. Prime then spends a portion of the episode scaring off his own team before they manage to subdue and reassemble him into his classic robot form. And yes, it’s all as bizarre as it sounds. 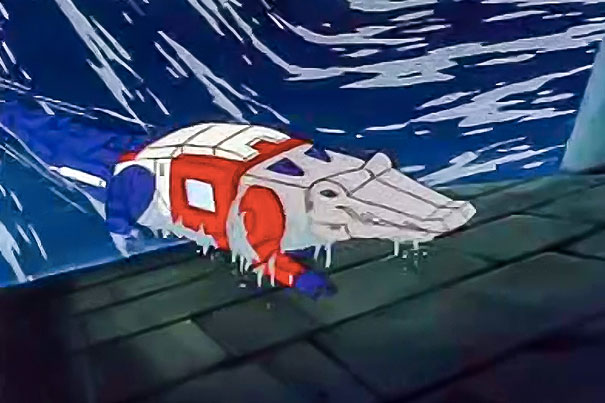 But hey, who wouldn’t want to see a Masterpiece alligator Prime, eh? Oh, and it could even allow for Optimus’ arm to be detached and used as a weapon as also shown in the episode. 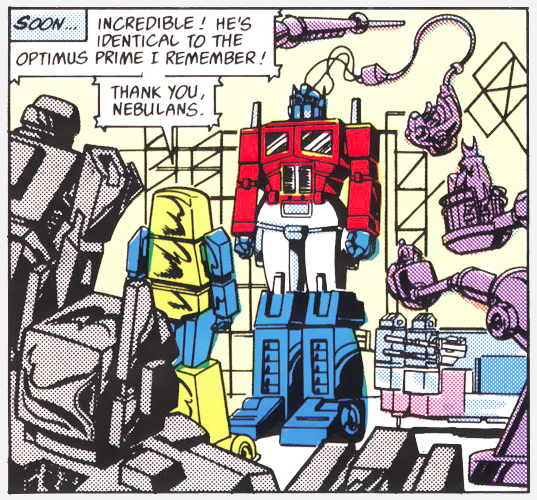 OK bear with us on this one, as we know what you’re thinking. Yes, it’s more likely that a Masterpiece PMOP would be a completely new design, as the toy’s representation of Optimus’ new form is quite different to his classic look. However in the Marvel comic storyline, it’s explained that the smaller robot form is actually identical to how his original body looked (before he was killed and stored on that floppy disc we mentioned before!). Given that, how incredible would it be to see a Powermaster-style trailer accessory that somehow allowed a classic MP Optimus to fold up and combine with it? Yep, total pipe-dream and never going to happen, but it sure would be something! Especially as we’d also get that classic Marvel PMOP head design. 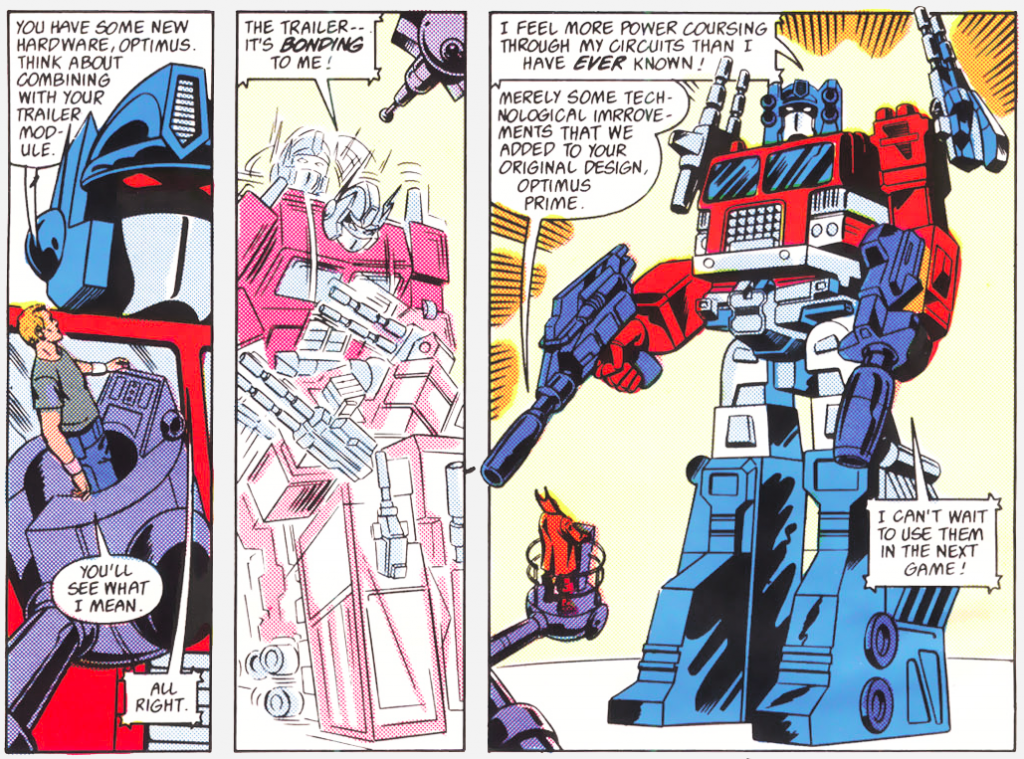 Anyway, as we say it’s much more likely that an MPPMOP would be a new design, and we’re definitely happy for that too. Masterpiece Hi-Q sounds wonderful either way! 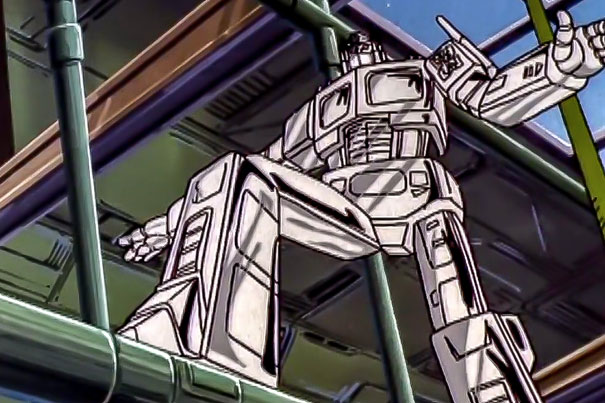 I said we wouldn’t be including potential repaints of Optimus himself, but this one was just too tempting not to mention! If you’ve ever seen the absolute banger of a cartoon caper that is The Return of Optimus Prime then you’ll know what this is all about, as our hero coats himself in a super-protective alloy to prevent the effects of a highly-infectious hate plague that has consumed most of the other Transformers (and just about everyone else!). As kids, many of us assumed that this was somehow a homage to the white Optimus Prime that was part of the G1 Ultra Magnus toy, but it would sure be fun to see this desaturated scheme done up in Masterpiece form one day. 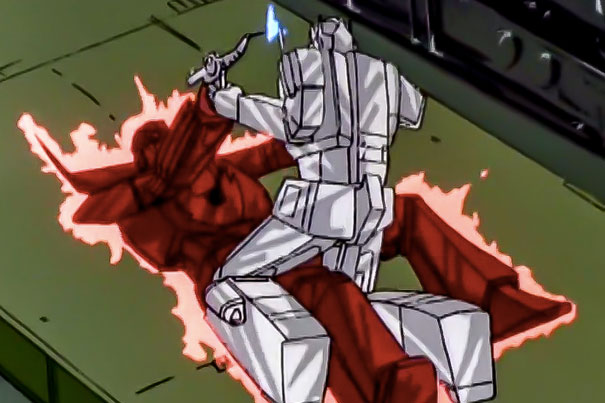 Oh hey, how about a two-pack with hate plague MP-9 Rodimus Prime, eh? Any takers?

So, that’s our list! Do you agree with our choices? Did we miss anything out? Let us know if not and of course feel free to suggest your own!

COUNTDOWN: 12 gimmicks that no Masterpiece Optimus Prime has featured so far