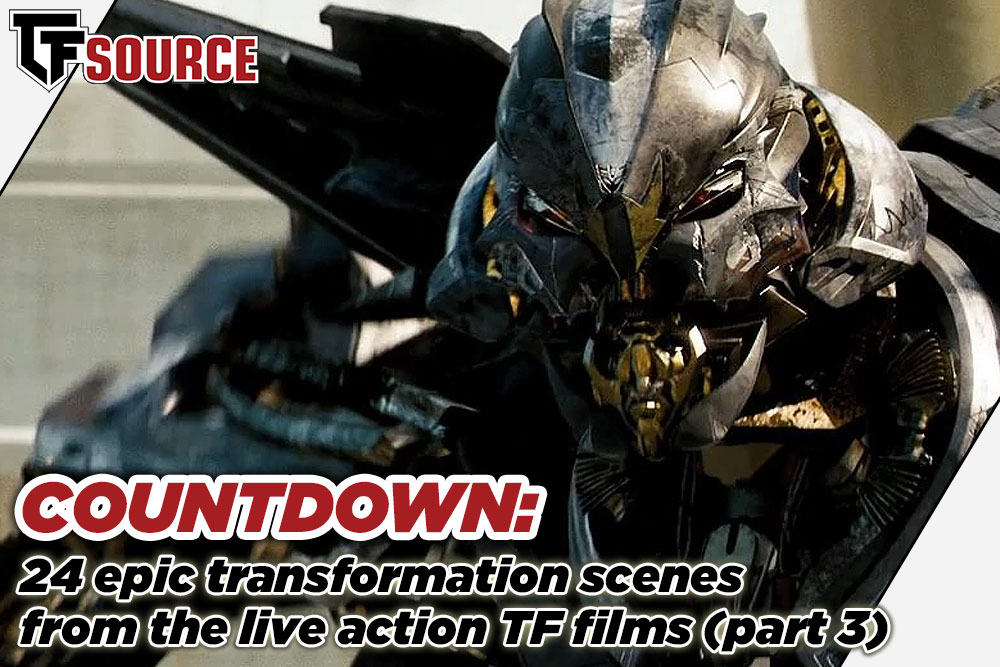 We’re concluding our list of the most epic transformation scenes found in the live action Transformers films! We’ve scoured all six films so far and selected 24 moments, presented here in no particular order. To keep it manageable we’ve split it into three parts, so if you haven’t yet seen them check out part one here and part two here.

It goes without saying that there will be mild SPOILERS ahead for all of the live action Transformers films!

The opening scene of the Bumblebee movie is pure catnip for Generation 1 fans. Oh, there’s that guy! And him! And her! Yep, there’s all manner of iconic characters brought to life in a stunning CGI spectacle the likes of which many people have been waiting years to see on the big screen. We unashamedly picked this brief but exciting clip of the Seeker army transforming because of how much it calls back to the very first episode of the G1 cartoon with its tetrajet stylings. Just wonderful.

We’ve already mentioned that Bumblebee is the robot who transforms the most throughout the six films so far, but there’s something about this just-before-the-credits-roll sequence from Dark of the Moon that feels a little special. Maybe it’s because the whole thing takes its time, allowing us to appreciate every clank and whir that’s happening on-screen.

A lot of people dislike Starscream’s design in these films, but there’s little denying that he provided a lot of exciting scenes in the first film with his mid-air antics. This sequence is brief but compelling, showing that he may be built like some lumbering monstrous bird but he’s still pretty graceful in battle.

I debated about including this one, honestly. On the one hand it’s not as cool as the transformation for Optimus’ original design and there’s definitely a bit of on-screen fakery in the process. However there’s still something compelling about this conversion, and it does have some nice flare with the grasping hand and the exhaust wrap around.

Sideswipe was definitely one of the more memorable Autobots introduced from the second film onwards and a large part of that is likely down to his initial appearance here. His feet-for-wheels design is certainly something to see, only for him to back it up by slicing an enemy combatant in two. Damn, he’s good.

It was a toss up between this sequence and Lockdown’s earlier transformation in the fourth film, but ultimately I went for this one because of how intimidating he is here. Having just murdered one of the human protagonists (you know the one… er, that guy…) he eerily slides into his Lamborghini alt’ mode before looking totally badass next to some flames. As one does.

Whilst this scene is perhaps more notorious for Bumblebee weeing (yes, really), it ends with this utterly sublime sequence of the Autobot crew transforming back to vehicle mode. What tips it off is Optimus barking the order to “Roll out!” in a moment sure to spark waves of nostalgia, but the sight of giant robots contorting into cars alone is certainly something.

So here it is, our last transformation! And boy did we save an absolute belter for you. Whilst Optimus’ first transformation in the 2007 film might be the most memorable it’s this sequence that really got our hearts pumping, as Prime bursts into battle accompanied by Steve Jablonsky’s belting score thundering away in the background. Absolutely epic.

So, that’s our list! Do you agree with our choices? Let us know if not and of course feel free to suggest your own!