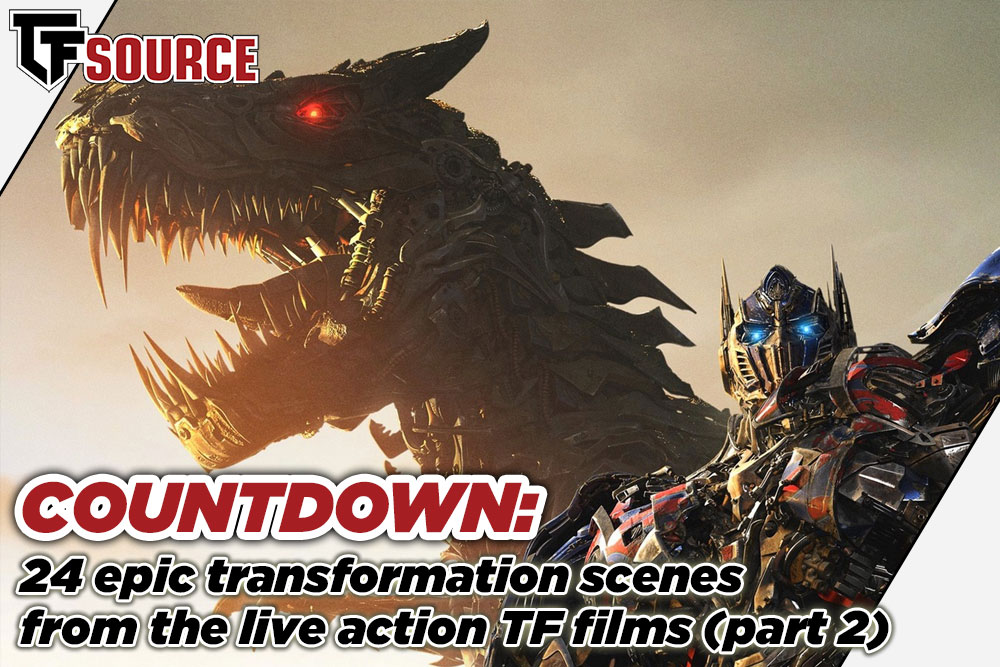 We’re continuing our list of the most epic transformation scenes found in the live action Transformers films! We’ve scoured all six films so far and selected 24 moments, presented here in no particular order. To keep it manageable we’ve split it into three parts, so if you haven’t yet seen part one you can find it here.

It goes without saying that there will be mild SPOILERS ahead for all of the live action Transformers films!

The final battle from the first live action Transformers film is chock-full of exciting moments, but this clip of Ironhide transforming into a slow-mo-leap is definitely one of the most memorable. I certainly remember being blown away the first time I saw it!

Fans waited with bated breath for the Dinobots to show up in the live action films only to have 2014’s Age of Extinction hold them back until surprisingly close to the end. When they do show up though it’s a truly epic affair, with Grimlock’s amazing transformation only made better by Drift’s surprised response, “I was expecting a giant car!”

Megatron seems to get a new body with every film, and whilst his Revenge of the Fallen tank form was a little divisive, most fans seem to quite like the truck mode he was sporting for Dark of the Moon. This transformation sequence is really nicely done, with the canvas cover turning into a hood for his still-injured face an especially neat touch.

OK, let’s put aside the elephant in the room – this is Blitzwing, not Starscream, ok? Yes, we were all surprised about it, but it doesn’t stop this moment from the Bumblebee film being absolutely awesome. A money shot from the pre-release trailers, there’s a simplicity to the sequence that oozes G1-esque nostalgia, despite being an entirely modern twist. One of my favourites on this list.

As one of the first few transformation sequences of the 2007 film, this one will always remain pretty memorable! The idea of a Decepticon police car was a very cool one. Seeing it twist and contort into Barricade’s wonderfully-hideous robot form is even better.

Nitro Zeus is one of the more memorable Decepticon characters from the later Michael Bay movies, and this transformation sequence stands out quite a bit too! Particular props are giving to the fancy way he twists through the air before landing, and how bits and bobs continue to pop into place as he starts speaking.

The Bumblebee movie really pushed back to the core of what many fans wanted to see on screen from a live action Transformers film, and this wonderful transformation sequence is a great example of that. You can feel every piston turning and every panel of metal clanging as our beloved Bumeblebee assumes his robot mode form in front of Charlie for the first time. In many ways it feels like one of the more “real” transformation scenes in all of the films.

There was no way you weren’t going to see this sequence on the list, was there? For many fans this is the definitive transformation sequence, nay moment of the live action Transformers films. Optimus’ conversion is so intricately-impressive by itself, but then the camera whips around to showcase the other four Autobots and millions of viewers are left with their jaws on the floor. And SCENE.

So, that’s part 2 of our list! Do you agree with our choices? Let us know if not and of course feel free to suggest your own!Oh, and be sure to check out part 3 as well!