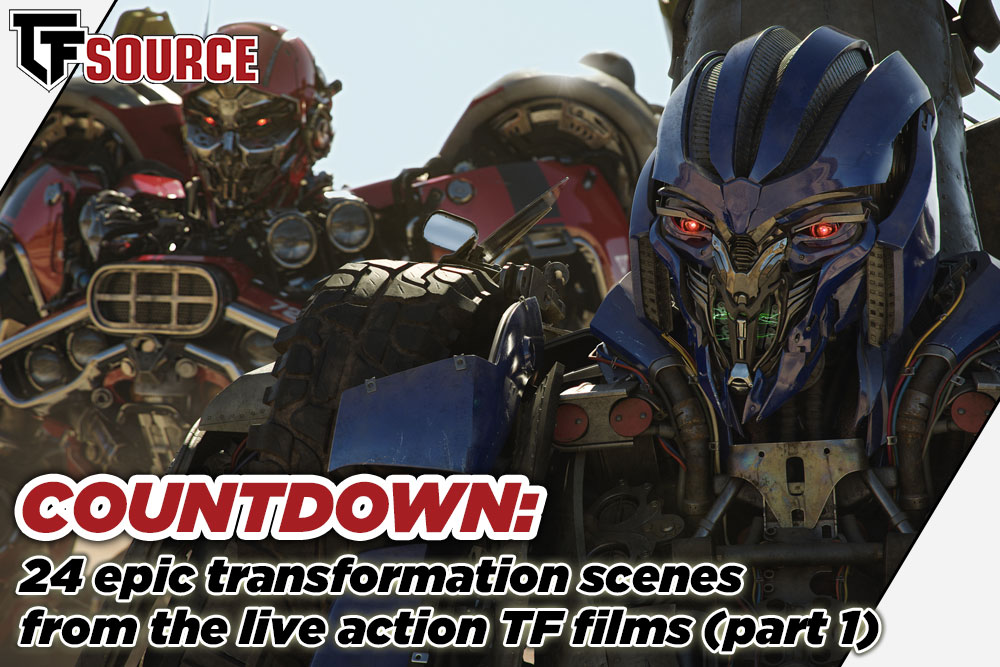 “Like Citizen Kane but with giant robots” is precisely how no-one has ever described the live action Transformers films. Yet love them or hate them, most fans can agree that the transformation sequences involved are a feast for the eyes. So with that in mind, we’ve diligently scoured all six current live action Transformers films and put together a list of what we think are the very best (in no particular order). Yes, we even rewatched The Last Knight – you’re welcome!

To keep this list manageable we’ve split it into three parts. It goes without saying that there will be mild SPOILERS ahead for all of the live action Transformers films!

Kicking off with the very first transformation scene in any of the live action Transformers films. We’d had this moment shown in the trailers but it was still thrilling, especially after the slow build of the military trying to communicate with the mysterious helicopter and the almost menacing manner in which the rotor blades suddenly flip back. It’s a shame we don’t get a complete sequence through to Blackout standing up in robot mode, but it still made our jaws hit the floor at the time.

From the very first to one of the more recent examples, this sequence is just plain awesome. In fact I’ll never forget when the person I was sat next to in the cinema turned to me and whispered “OK, that’s cool!” after it happened. We may not know why Megatron is no longer calling himself Galvatron and why he’s sporting an entirely new design, but hey – he looks very swish when doing his thing.

Despite pushing the boundaries of believability somewhat, this sequence from the third Transformers film is definitely the creepiest inclusion on the list, as we see the murderous buzzard turn himself into a supposedly innocent-looking pink Bumble-wanna-bee before asking a young girl, “Is your daddy home?” Yikes.

I’ll say this now – if you want the most bang for your buck in terms of giant robots transforming in the midst of cool action sequences, then the first Transformers film is still where it’s at. Ably making that case is Jazz taking on Brawl here. No further comment necessary.

Bumblebee is the robot we see transform the most across all six films so far, yet this sequence still managed to add a slight spin on the formula. In the film that introduced the idea of “transformium” and saw many of the characters convert by splitting into separate molecules, this was one of the standout sequences.

Parts of this sequence were heavily played in much of the pre-release media that went out before the 2007 film, and it’s not hard to understand why. The entire highway scene is a fan favourite from the first movie, and this mindblowing transformation sequence is a large part of that. We’d certainly never seen anything like it at the time!

Revenge of the Fallen isn’t remembered with the best reputation these days, but there’s still some good stuff in there despite the film’s problems. The scene with the Constructicons merging into their combined form is one of the more technically impressive inclusions on this list. Oh, and for the gif above we trimmed out nearly all of the bits with Agent Simmons and Leo Spitz, which some might  say wouldn’t have been a bad idea for the film itself.

Woof. This might be one of my favourites on this entire list. Considering it pushed itself as being a “simpler” Transformers film, Bumblebee still packs a helluva wallop when it comes to stunning visuals and amazing transformation scenes. Shatter and Dropkick were beautifully realised characters and finally gave us our first glimpse at on-screen triple changers. Stunning!

So, that’s part 1 of our list! Do you agree with our choices? Let us know if not and of course feel free to suggest your own! Oh, and be sure to check out part 2 as well!