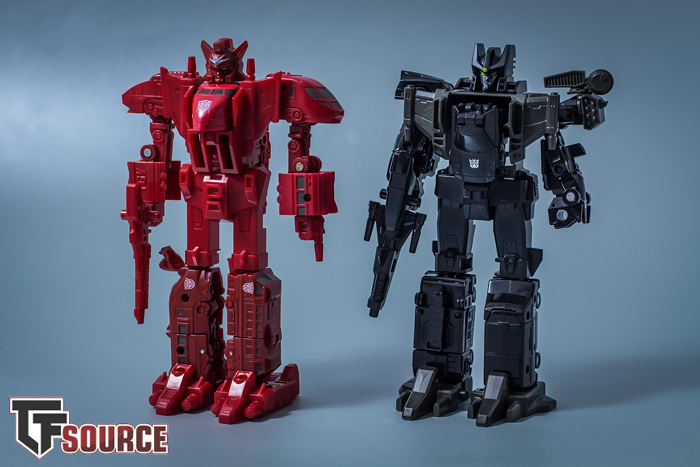 This article will focus on a number of Transformers-related short stories that are quite indicative of my current collecting experience. It’s very interesting to me how my relationship with my Transformers collection changes when I lose some enthusiasm for buying and photographing toys. There are random things and unrelated activities that spontaneously spark interest in TFs for me again, or have the opposite effect and temporarily drive me further from them. It almost feels like the bright but fluctuating flicker of a dying flame…or at least one that may just need a break for a bit. 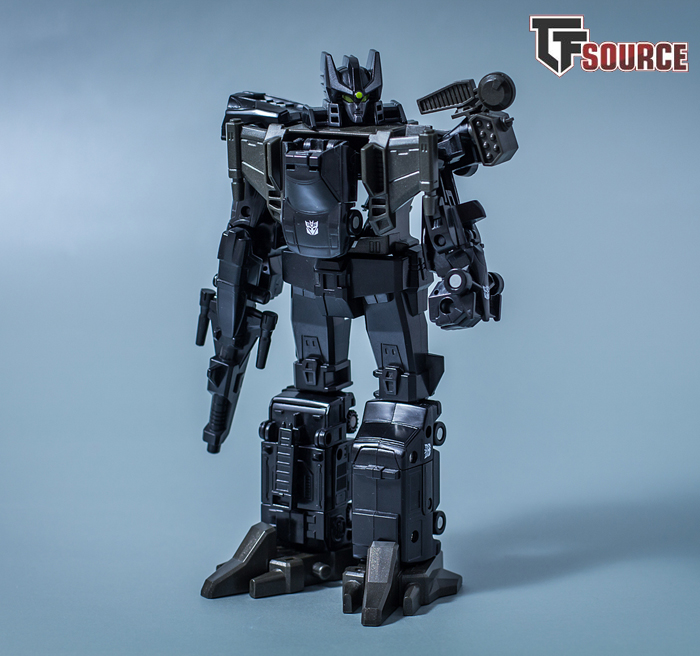 A while ago I decided to collect all of the Operation Combination sixcombiners, but not the originals. The Transformers Micromaster reissues from 2002/2003 are wonderful figures and it was time to re-purchase the ones I used to have, as well as collecting all the chase versions I’d never had. This was all sparked by the landing of two red Sixtrain members for £2 each. Safe to say, the rest of the journey was much more taxing. 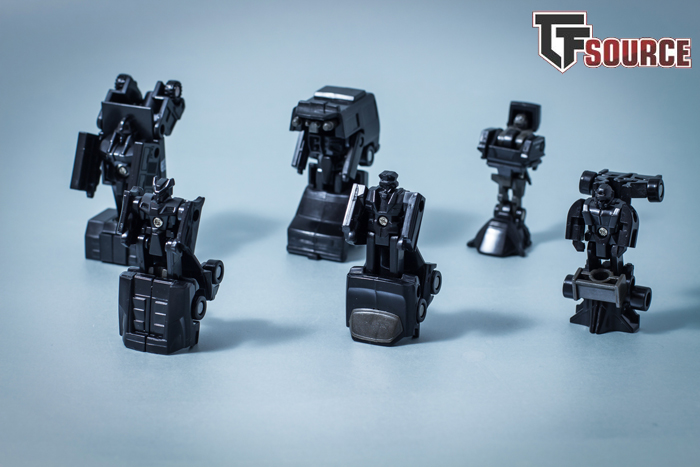 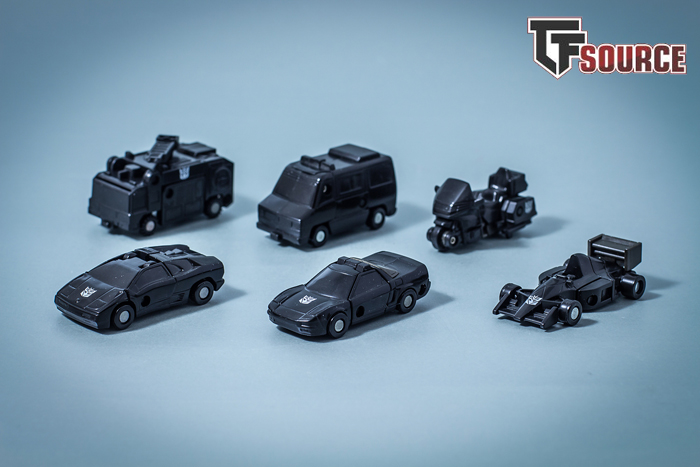 While there haven’t been any complete Black Sixturbos or White Sixwings available for sale in the time I’ve been after them, it still seemed like insanity to find them all one by one. Once the online stores that had no doubt been holding onto the individual chase figures for ages were visited, the long wait for the last pieces began. I got as far as assembling all of Black Sixturbo, minus his head. I always figured I’d have to chance upon a boxed chase #1 figure and just sell the NSX car, keeping the head. I even bought three MISB Sixturbo singles from eBay UK, and after three months of waiting I finally got to open them last week in London. One of the figures was indeed a black chase variant…but it was the bike + legs that I already had! Enter US collector David Clouder, who snagged a bunch of Black Sixturbo parts in a lot from Japan and just stunned me by sending the head to me for free. So, thank you so much Dave, he’s done! I love that this hobby can be such a source of kindness and goodwill on occasion. 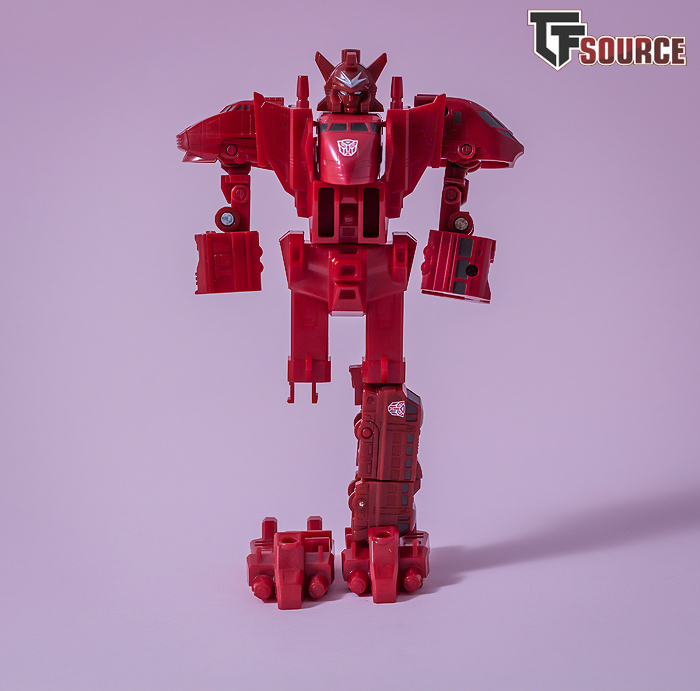 Before Sixturbo, which took bloody ages by the way, was Red Sixtrain. He too was missing a key element that took much longer to source than the others. I had randomly picked up a spare red chase #1 train from the set, and thought I could one day use it as trade fodder towards the one I needed. This is where Bret Lovell comes in, another US collector. He needed red #3, which I didn’t have a spare of. 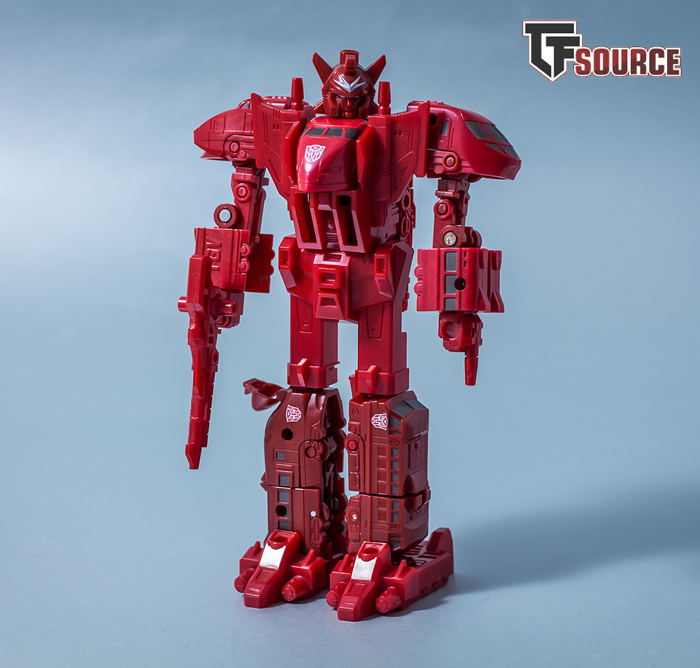 However, the online store I raided for the parts did still have an extra #3 in stock, so that got bought and sent directly to Bret! Why? because he was kind enough to trade me his spare #5 and gave Red Sixtrain his right leg and hands! Thank you so much, Bret…and I used the spare red #1 to trade for one of the Black Sixturbo individuals, so that worked out beautifully. Completing things is nice and makes me happy. Friends who sell me toys I desperately want also make me happy. 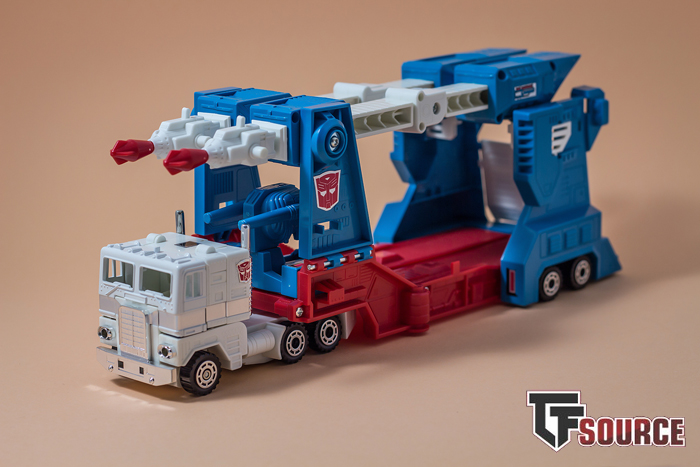 Magnus, Italy and the Police

Here’s a boo-hoo story that escalated quickly. Above you can see a picture of a simply stunning plastic-wheels, unpainted G1 Ultra Magnus from 1986. Around September/October time, I decided I wanted a perfect painted rubber-wheel one to go with it (and my yellow and Movie Trailer Magnus toys), so I set my sights on acquiring a Takara reissue version. I ordered one online that was opened, but otherwise excellent, or so I thought.

It took almost 7 weeks to reach me, and by that time a lot had happened. I’d gotten back into sim racing and videogames and cooled my interest in buying Transformers. I’d been to Torino in Italy for work and subsequently lost my wallet – containing debit and credit cards, UK driving licence, Lego VIP card etc – in the airport. It was never found, sadly. But hey, I got to see Hans Zimmer deliver a keynote presentation! Anyway, because I’d lost my driver’s licence etc, I had to go to the police in Torino and report it stolen. Fun. Fast forward a few weeks and I am back in Iceland. I received that Magnus and, unfortunately, it was yellowed, stickers applied and had no instruction sheet. None of those things were advertised, so I tried to contact the store and let them know I wanted a refund. Two weeks, no response. I opened a PayPal case and they responded, very kindly I might add, and we decided on a full refund as soon as they received the item. So now I’d paid for the item + shipping, plus customs, plus return tracked shipping. At this point I had no idea how much I was out of pocket, but that yellowed Magnus was a symbol of my disillusionment with collecting and I just wanted it gone. 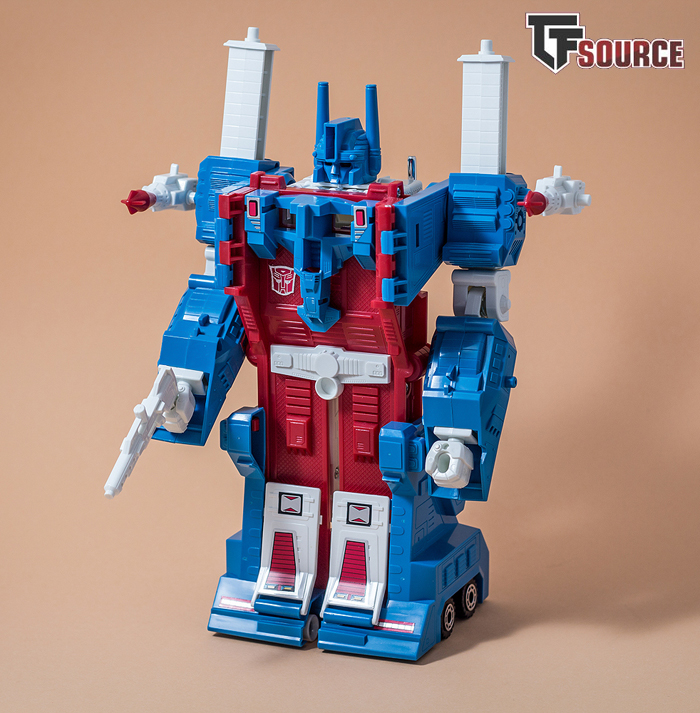 Not that Magnus. That Magnus is beautiful. Anyway, so I went to send the bugger back at the post office. At this point, my wife – my Icelandic lifeline – is away in France for a week on work duty. Of course this is the occasion I choose to park hurriedly in the most awkward spot in the post office car park, then reverse into someone waiting to exit the car park. No big deal, we exchange details and fill out the necessary paperwork (my daughter happily tucking into her gingerbread she baked in school while waiting in the car)…but I don’t have my licence, it was lost in Italy, and the UK DVLA have not managed to get me a copy of it yet. It’s snail mail or fax (seriously?!?!) and after who knows how many weeks, still no sign of it. Cue a trip to the police station right opposite to see if they have my details. Um, police officer seems very unhappy with me as I obviously am driving without a licence…but…I have one! It was just lost! Proof is on the way! No good, after six months in a non-EU country, one has to have applied for a local driving licence. My bad, so I have to walk my daughter home in negative seven degrees celsius. Bastard.

Cue another phone call to the DVLA. “Where the hell is it? No of course no one here has a fax machine!!”. The third person I spoke to on the phone said I could just download it by an email link. FFS. Downloaded it, grabbed some passport size photos, got my mother-in-law to drop myself and my daughter at work and school respectively, and bowled into the Icelandic DVLA equivalent to get my temporary driving permit. Wait what..I can’t have one? I have to go to the police and fill out a lost item form? But I didn’t lose my wallet in Iceland, and I have reported it lost in Italy and the UK! Apparently nothing doing, AND I’d need a medical examination as I wear glasses. AND my car no longer is starting!! Utter nightmare, but my in-laws jump-started my car and delivered it to my home, and I got all that bastard paperwork sorted…so it was up to the DVLA in the UK to send official documentation to Iceland’s commission so I could get a temp licence and actually drive. All because I had to return that poxy Magnus! Yes yes, I must shoulder a lot of responsibility, for dinking the other car and for not knowing the licence rules (that are not advertised or explained ANYWHERE) and losing my wallet. I’d rather blame Magnus, because I certainly was not interested in dealing with all that crap right now. 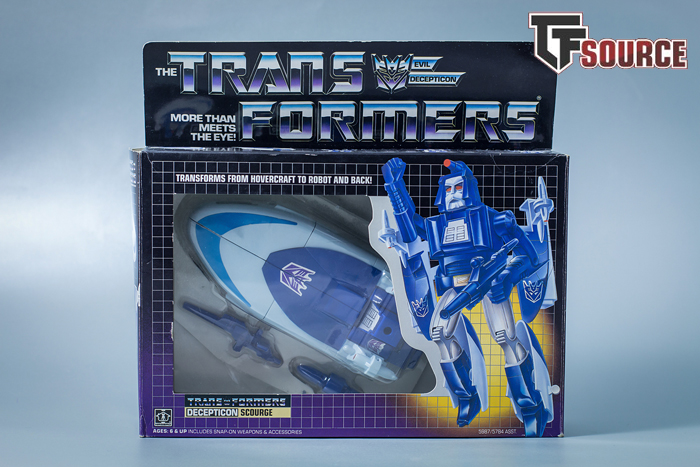 You Got The Love

After the week from hell in Iceland, I made it to the UK with my daughter and got to receive the above mint, boxed G1 Scourge from 1986, courtesy of the Spacebridge. Seeing this item in hand, holding it and staring in wonderment at its condition, letting the nostalgia wash over me…it seemed like Transformers had won me back in style. It still shocks me every time I see it or handle it. I remember seeing this on the shelves in 1986 and 1987 in the UK, in Toys ‘R’ Us, and I will never forget it. Now, I never have to.

Especially since I have a boxed Targetmaster version en route too… 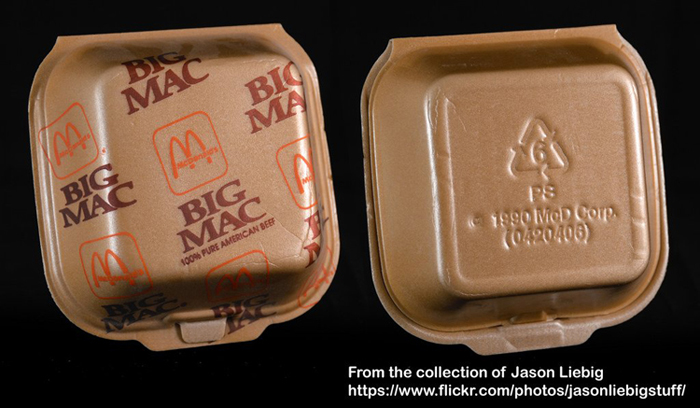 Remember the vintage 80s McDonald’s Transformers Happy Meal toys? Almost all of us old buggers had one (or all) as a kid. I had the Big Mac. Still do. Anyway, the old styrofoam packaging for it really stuck with me, and the gorgeous Project Cars 2 sim racing game allows you to add custom liveries to your race cars. So, after messing about with Transformers and synthwave liveries, I decided the McLaren 650S GT3 needed a Big mac Happy Meal style livery…The Big Mac Big McLaren! I had to identify the closest font to the above packaging and recreate much of the colours and logos based on PNGs that people had created, including Grimace! 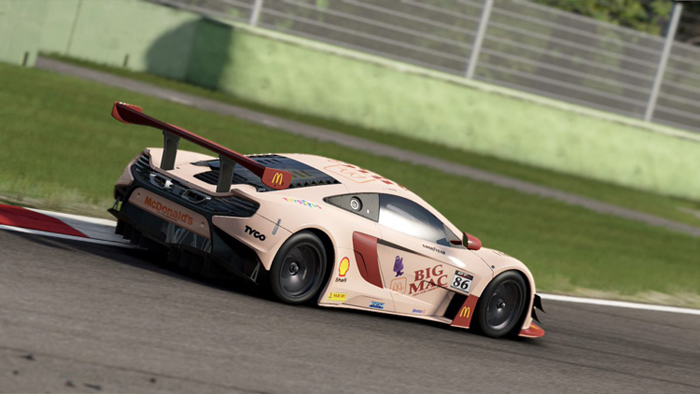 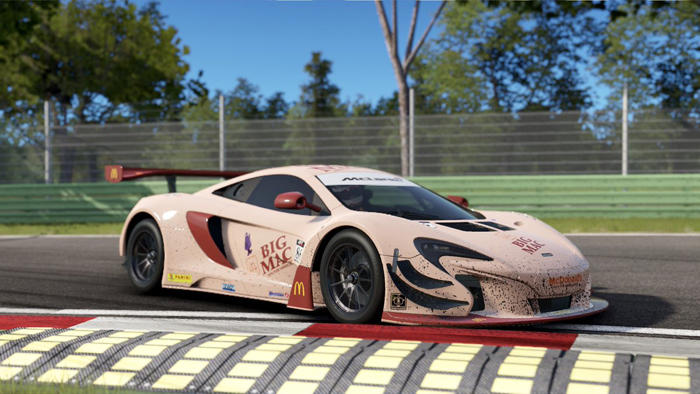 Look how good that McLaren looks, littered with obscure Transformers merchandise Easter eggs.  Tyco, Panini, Weetabix, Ocean and even Hasbro and Toys ‘R’ Us sponsorship, maybe some of you can figure out the significance! Of course, it turns out I was wrong and the Happy Meal Big Mac Transformer toy was actually the burger itself and not the brown styrofoam packaging. Oops.

Age is a bastard. 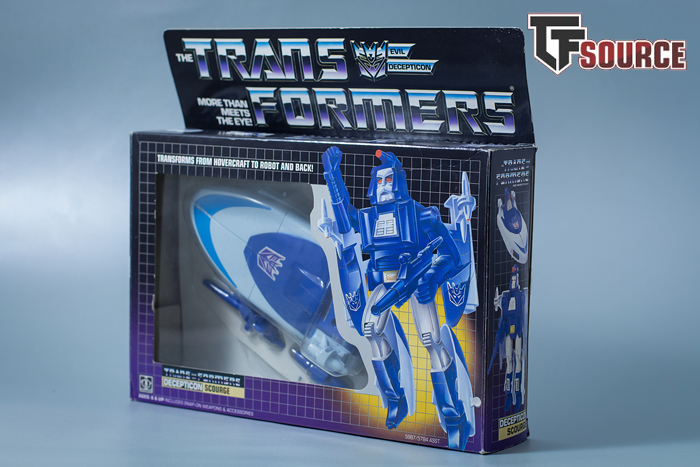