I have been chasing Stephen Munson for a very long time to provide us with an interview. Since these features are as much – if not more – about the collectors themselves than the toys they’ve amassed, I wanted Stephen to give us an insight into how and why he has focused his hobby so heavily on G1 minibots and the hundreds of global variants therein. It’s also refreshing to meet a collector who is such a success in a hyper-competitive and expensive niche of the hobby with a open mind, friendly and approachable demeanour. But make no mistake, I was also very keen to feature what could be the most impressive G1 minibot variant collection in the world today. There’s no shortage of other goodies in there too, you might notice…

My name is Stephen Munson and I collect G1, Masterpiece, and Classics Transformers. However, at this time I’m slowly selling off most everything but G1 to focus on my main love, G1 minibots. I’m 44 and grew up in the G1 era and was lucky enough to have seen the introduction of Transformers. As a kid we were first introduced to Gobots which were amazing because they were basically Hot Wheels size toys that turned into robots, what!?! But when a friend from school came in with a G1 Hound (the first Transformer I had ever seen, or even heard of) my 10 year old mind was blown. I was fascinated with it and after borrowing it for the weekend and showing my mom who seemed to be equally impressed, she took me to Toys ‘R’ Us and bought me my first Transformer, Thundercracker. From then on I was hooked.

I routinely acquired and traded with the neighborhood kids and religiously watched the cartoon. I’d study the catalogs and try working out the transformations from pictures, it was a great time in my life. Unfortunately a few years later after the advice from my older cousin, I gave away all my toys and started to focus on other stuff like bikes, skateboards, sports, etc… trying to be more “grown up”. Fast forward to my adult years, around 2000/2001 I discovered Ebay as I was trying to buy car parts on my buddy’s computer. One of my first trial purchases was a small lot of G1 Transformers. I saw them listed and instantly was hit with the nostalgia bug. I think it was a Megatron, Sideswipe, and a couple others. Hooked again. Before I joined any forums I was studying Fred’s Workshop’s variants page.

The toys have always meant more to me than the cartoons or characters and I started with completing the ’84-’85 line that I knew from my childhood. Then I moved on to focusing on different versions of Optimus Primes, and the normal stamping, paint, and mold variants for the rest of the line. That led me to minibot stamping variations and eventually led me to buy some carded Antex minibots, then the keychain minis, then black chase, and BotCon pieces. My first big minibot purchase was a white IGA Bumblebee, which led me down the rabbit hole. Besides a couple G1 and MP pieces here and there, for the last 5 years or so minibots are all I actively still collect. 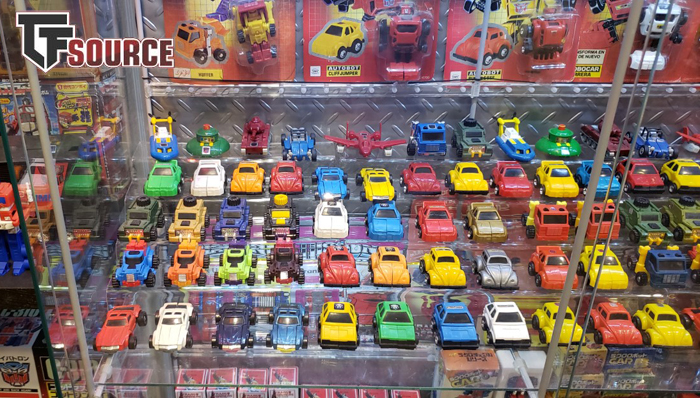 I’d say the biggest difference in the last 15 years has been the online community. When I first started as a solo collector my only references were from Fred’s variants page with his contributors like Maz, Ras, Morgan, etc… all I knew was from what was documented in the blogs and Ebay comparisons. Now there are so many sources online that just about anything can be resourced. Forums were great, but now it seems social media sites like Facebook are the norm for most of my collecting needs. Now the world’s collecting community is accessible and I personally have found that the most helpful as foreign variants are my main drive. I’ve met friends globally and without them I would never have been able to get my collection as far as it is. Friends in Peru like Guillermo Pizarro Negron and David Buenaño Hochman have allowed me access to knowledge and many South American figures that were inaccessible before. Martin Lund helped me with some Ceji minis, etc… With the global community growth recently the whole world has opened up, literally.

I’d say at the pace at which this hobby has grown in 5 years, there will be some very impressive collections, and some heartbreak as many of the mega rare figures are being snatched up. When I started collecting minis years ago, carded Antex were common on Ebay and easily found for $20 a piece. Then as the community has grown the supply has dried up, and the prices have rocketed up. Many of the uber rare figures are permanently in collections, and as with anything, the rare stuff is in demand and without the supply, many collectors will never have access to them, and when they do the prices might still make them out of reach. On the same note, the growth of the community will also bring in the treasure hunters that will seek out their regional figures and bring them to the market. So who knows what case finds and such are still out there to be discovered.

That’s a tough one. I’d have to say finishing the IGA minibot line is pretty special to me because it was recently finished. But so was finishing the Estrela line and Rubiplas at the time. With minibots, there are so many variants that make up a regional line, they’re all part of the “big picture” and I take them all as special in one way or the other. I do have some very scarce figures that I’m fond and very proud of, but to pick one over the other it almost impossible. I’ve found bargains on some, and have overpaid on some but I try not to think about their financial values or my luck as success. The hunt is a big part of most collectors’ drive, the next big score is part of what keeps the passion alive. I’ve been in the hobby long enough to see many new collectors come and go. Some go in gung ho with their pistols blazing, spending thousands during a small timeframe to achieve their goals only to get burnt out and sell off their collections never to be seen again. For me a big part of what I view as my personal success is my perseverance towards my passion.

Oh man, I’d say one thing that stands out in my head is the guy that spent 20k+ for a G2 Menasor that he was told was basically a one of a kind prototype only to find out there were half a dozen or more the seller was holding out on. If I recall he ended up selling if for about half of what he paid shortly after. I felt terrible for the guy. It was a big deal back then that raised eyebrows and scepticism throughout the community. Its still is being talked about to this day.

A few years ago, I’d say my Peter Cullen signed Optimus Prime just because it is such an iconic figure signed by the man himself. But now I’d have to say my white IGA Bumblebee as it represents the beginning of my minibot collecting, and a milestone. It was also acquired on Ebay from a seller that sold some IGA mini sets that I hesitated on. He had numerous sets that he’d list one at a time, week after week. They all included a Puffer, white Bee, an Outback and a Swerve if I recall correctly. He was selling them for $300 a set so I procrastinated. Listing after listing I held out until I finally decided to jump on the next one. Well the next one never came, only the lone white Bee. I messaged him, and sure enough all were gone besides the Bee. I ended up buying it for $100 which is a steal by today’s standards. Of course I ended up with all the figures years later, but It’s a reminder to jump on stuff you really want when you have a chance, because you might not get another.

I can count many figures in many collections I’d love to have, but as I’m so close to finishing my minibot set, I’ll say the big box blue Micro Change Bee owned by Colin Frith. Such a beautiful piece, and beautiful box! Truly jealous.

Make friends. Seriously. Without knowing the right people, the hobby can only give you so much satisfaction. The community has so much to offer through communication and the sharing of knowledge that its impossible to learn everything through just blogs. Also if rare figures are your thing, without the right contacts you’ll never get the figures you’re seeking. Ebay is a last resort for many sellers and only after their contacts have been exhausted will stuff be listed.

Also, focus on what is important to you, in the beginning everything looks amazing, G1s, Classics, MPs, 3rd Party, even Bay Movie stuff. But as time goes by, most people realize the “got to catch them all” technique is not the way to roll. People, myself included, start acquiring the next best thing, then the next, and next only to see an unfocused mess of figures they really don’t want. I still have figures packed in boxes I’ve wasted money on that I never really wanted but only bought because it was all the hype at the time, or it was part of said line. The Transformers line has so much to offer, figure out what toys, or line/subline means the most to you. 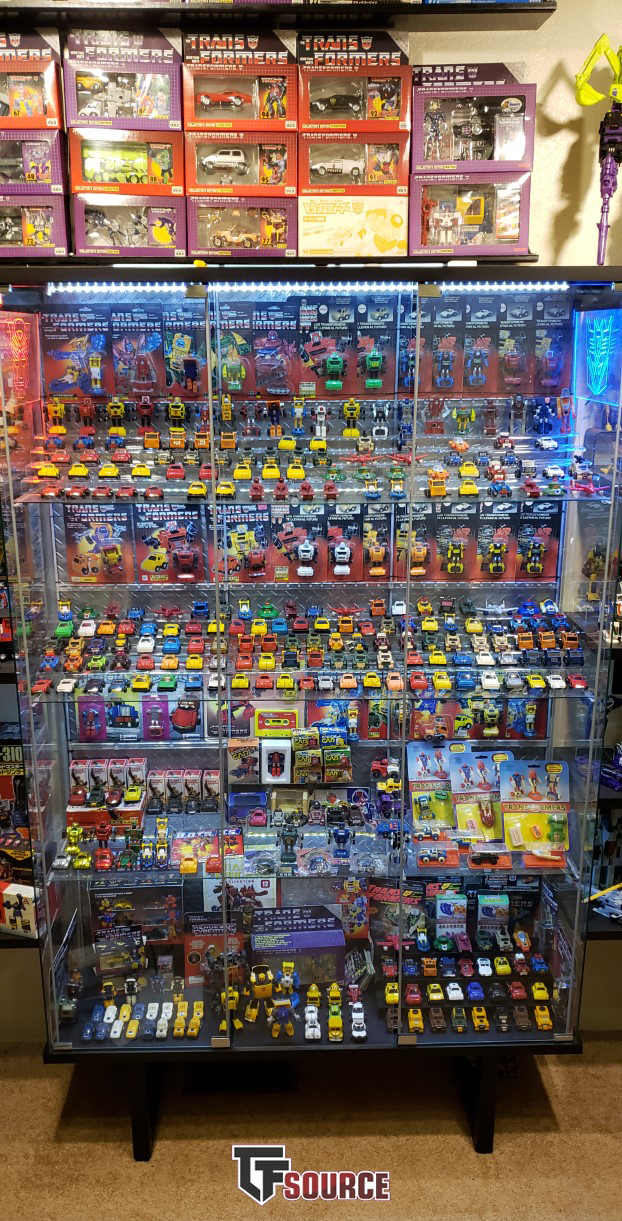 Many kind and gracious thanks to Stephen Munson for words and photographs.