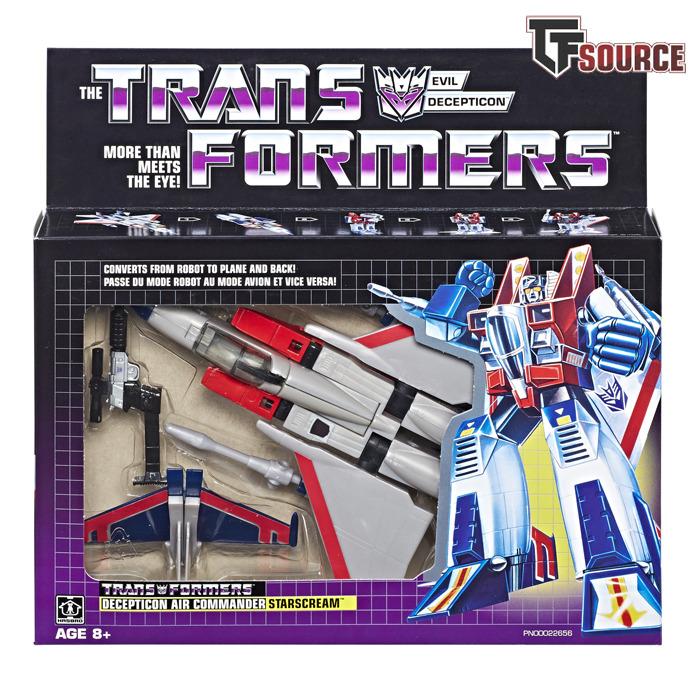 It’s barely been a month since I wrote about the Walmart exclusive Hasbro Generation 1 Hot Rod reissue, and just last week we looked at the reissue G1 Japanese exclusive Dinocassettes that are going to be part of the SDCC exclusive Transformers set. There’s been a great deal of speculation about what’s inspiring the reissue revolution – if it even is one and not just the dregs of Platinum Edition – and about what we are likely to see in the near future. Well, that speculation has been answered by way of more pre-release imagery put out by an Asian retailer as well as Walmart themselves. 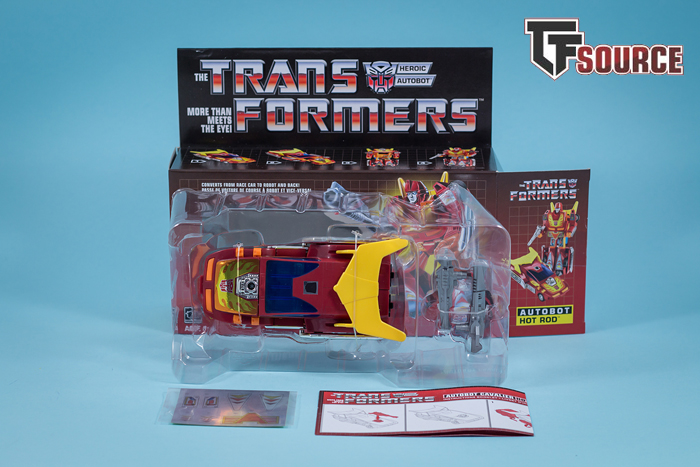 Walmart in the US have seemingly gotten an exclusive tie-up with Hasbro (Asia?) to release Generation 1 Transformers in vintage-style Hasbro packaging, something that actually has not yet been enjoyed in the spiralling history of G1 reissues. We’ve had Takara vintage-style packaging and even new packaging, but it’s nice to have proper vintage Hasbro boxes, artwork etc. Hot Rod was available first in Asia, then through the normal online retailers and should eventually find its way onto shelves in Walmart for the American market. I did wonder whether this release was intended for the Hasbro Platinum Edition box reissues and then just fell foul of the dying of Toys ‘R’ Us, meaning that Hasbro Asia needed a different North American retailer to put the thing out with. 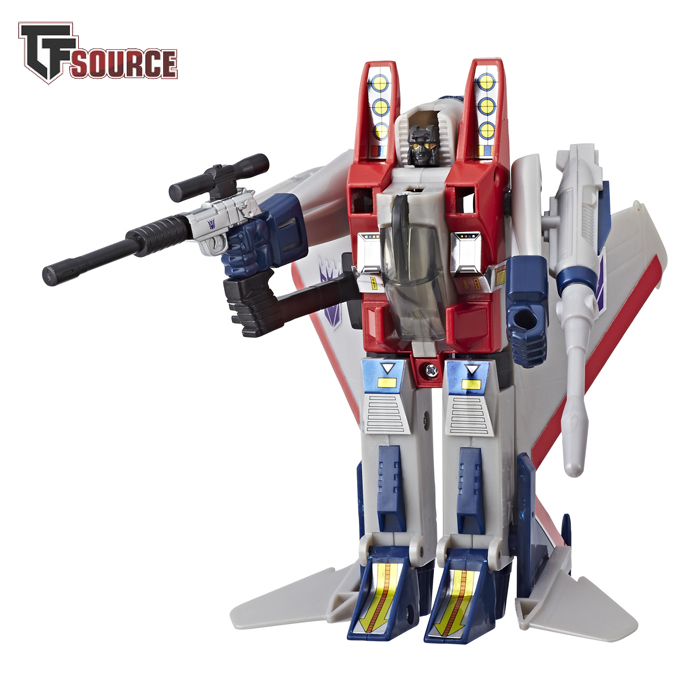 Well, even if that was the case as opposed to it being a purposeful new idea to reissue the toys for market with nostalgic packaging, we are getting more! Walmart have also put the above G1 Starscream reissue up on their website, expected to hit Asian online retailers in July (this month!) and then hopefully the store shelves shortly afterwards. The Starscream above has G1 Hasbro style packaging, which thrills me no end despite the subtle differences to vintage. He also comes with the Takara TFCollection Anime Starscream fists and Megatron accessory, which is absolutely fantastic! You can see the first use of those fists below: 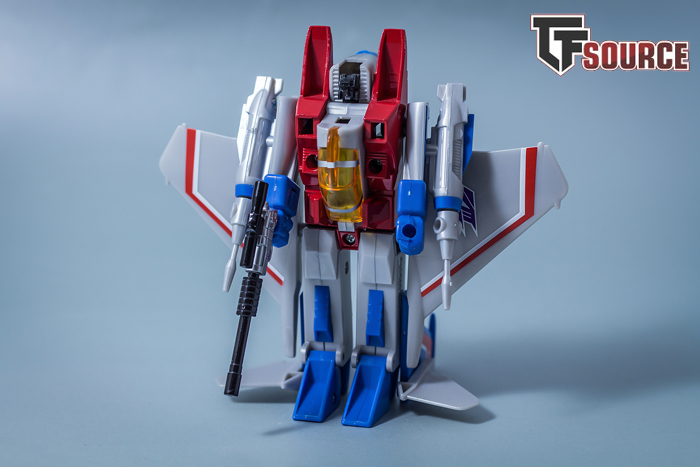 While the TFCollection Starscream had a cartoon-inspired paint job, the new Walmart one retains the vintage Starscream toy colours, making it a unique variant because of Megatron and the fists. Another huge plus for these releases, in my opinion, and another reason for those of us who already have a Starscream reissue to give this a look. The more of us buy them, the more chance there is of us seeing further releases in this …well crap, I guess we actually have to call it a line now! Unfortunately, as it is for Hasbro’s North American market, the missiles for this Starscream are the hideous elongated safety versions that we saw included with the Commemorative Series releases over a decade ago. It’s a small price to pay for me personally, as I will scour eBay and online sellers for vintage replacements!

We are also getting four different minibot reissues! From the promotional picture above, it looks as though they will come on G1-style cardbacks, but since I don;t see any minis on the cards, they could just as easily be boxes. We’ve got Outback, Tailgate, Bumblebee and Swerve – so basically a series 1 minibot and three series 3 minibots. It’s not all that strange an assortment when you think about the reissue TakaraTomy Encore minibot set from a few years back that featured all four of the above, along with Pipes. These minis will be sold separately, and will come in an assortment of eight. 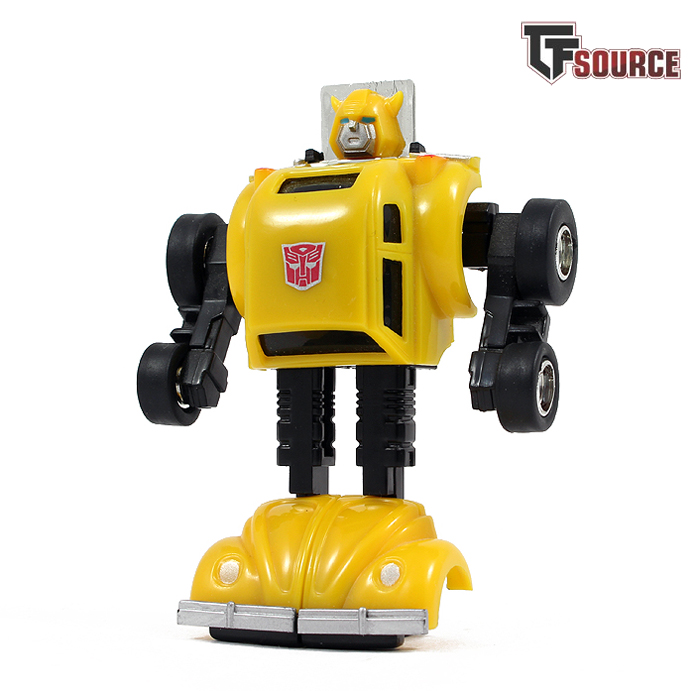 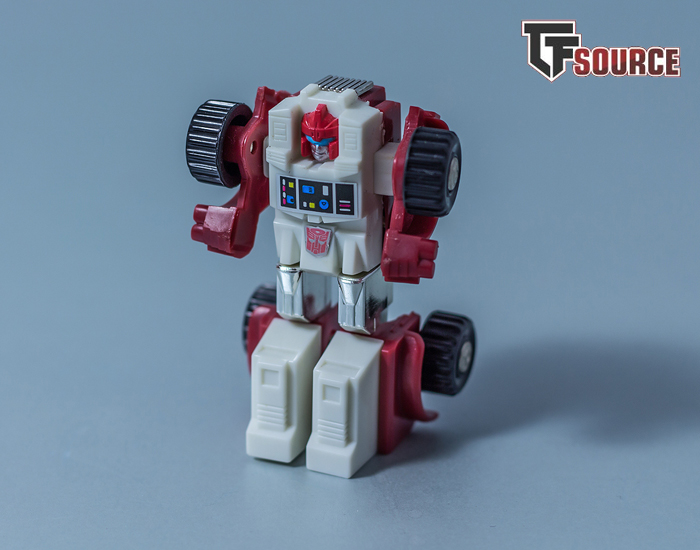 Within that assortment of eight, three will be Bumblebee, two of Swerve, two of Tailgate and a solitary Outback. The question is, will they be like the Encore releases with the extra painted details like blue eyes and remoulded cartoon-like face on Bumblebee, or will they stay true to the box artwork and the vintage releases? There seem to be a fair amount of folks who missed out on the TFCollection Bumblebee and the Encore Bumblebee, both having had toon-style face sculpts. On the flip side, some of us might actually prefer a reissue of the masked vintage-style Bumblebee. Either way, as long as they come carded, I’ll be happy. I’d love for this whole endeavour to stay as true to vintage releases as possible, scratching that MISB display collecting itch that I never will with actual vintage toys.

One hopes that with the central role characters like Swerve, Tailgate, Starscream, Rodimus and Bumblebee have played in IDW’s universe, it could add just that touch of interest to these reissues that appeals to more modern mainstream collectors and fans. These are said to be due in August this year and are currently being referred to as the “Legion Pack”. 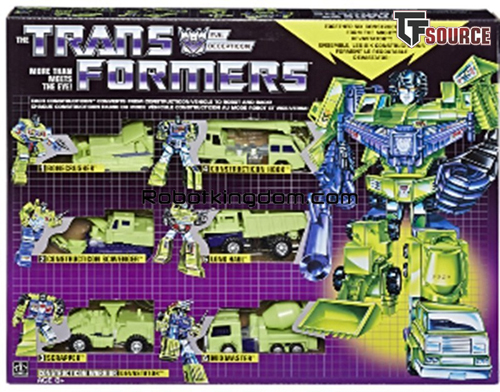 This is the real treat for me, though. A reissue G1 Devastator in the original vintage style giftset box. Of course the Takara Encore set also had vintage Japanese layout packaging, and even came in a second anime-style set too. I’m really looking forward to grabbing this as it’ll be the first green Devastator I’ll own for over a decade. My European exclusive yellow G1 set from Ceji is a wonder, but Devastator is very very green. The picture from Robotkingdom above is of course very low resolution, so I hope that we get bigger, clearer images soon. I can just about make out some of the individual Constructicon names which have largely stayed the same, with the exception of what appears to be “Constructicon Hook” and “Constructicon Scavenger” and their new Constructicon prefixes. 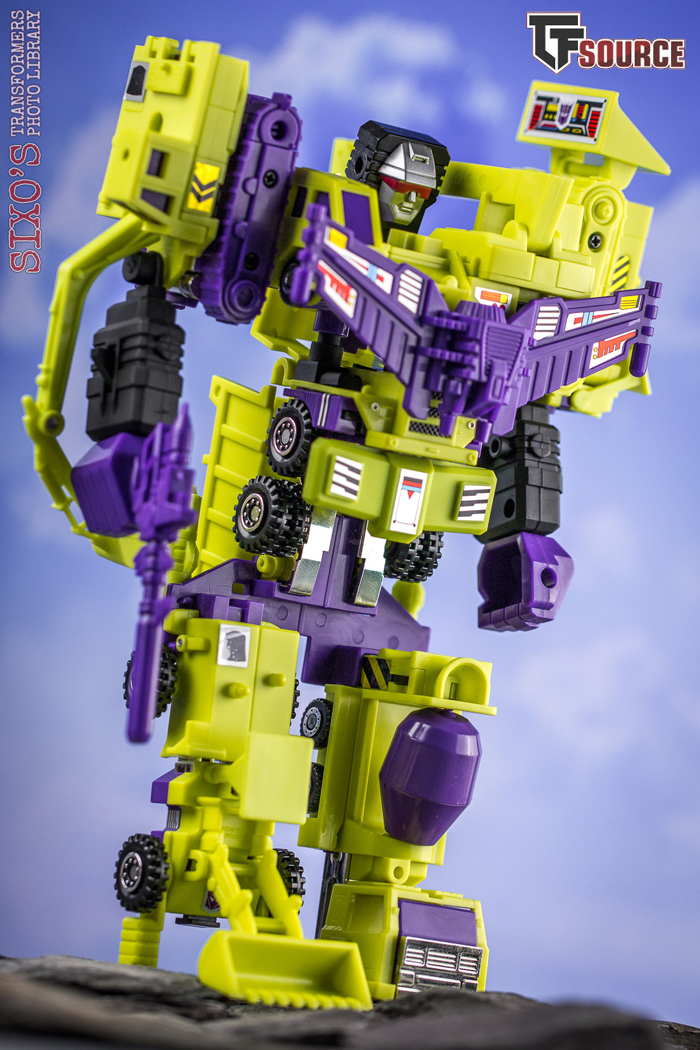 Due in July also – and how excited are we with such short lead times between announcement and release – the Constructicon set does not appear to be in the anime colours, judging by the green barrel on Mixmaster, compared to the Encore 20A Devastator image you see above with its purple barrel. The stock images were accurate for Hot Rod, so it is a bit of an assumption that they are also accurate for all of these new Walmart reissues, but it’s not impossible for them to do the Encore anime mould in G1 toy colours, after all that’s basically what the Starscream is.

This lot of Walmart exclusive reissues will tell us a fair bit about what to expect going forwards. Hot Rod was good quality with slightly dodgy-looking highly reflective stickers, but the packaging and moulding on the minibots and Devastator will tell us much about what to expect from promotional material and whether every release will feature something unique. The reissue pool is way larger than it used to be, to the point where they can choose a toy accurate colour scheme for Starscream but throw in a set of accessories from the toon-accurate reissue release from over a decade ago.

For now, between SDCC and Walmart, I am just continually surprised and thrilled that we are seeing G1 reissues continue.

Many thanks to Robotkingdom and Sixo for photo assists this week!