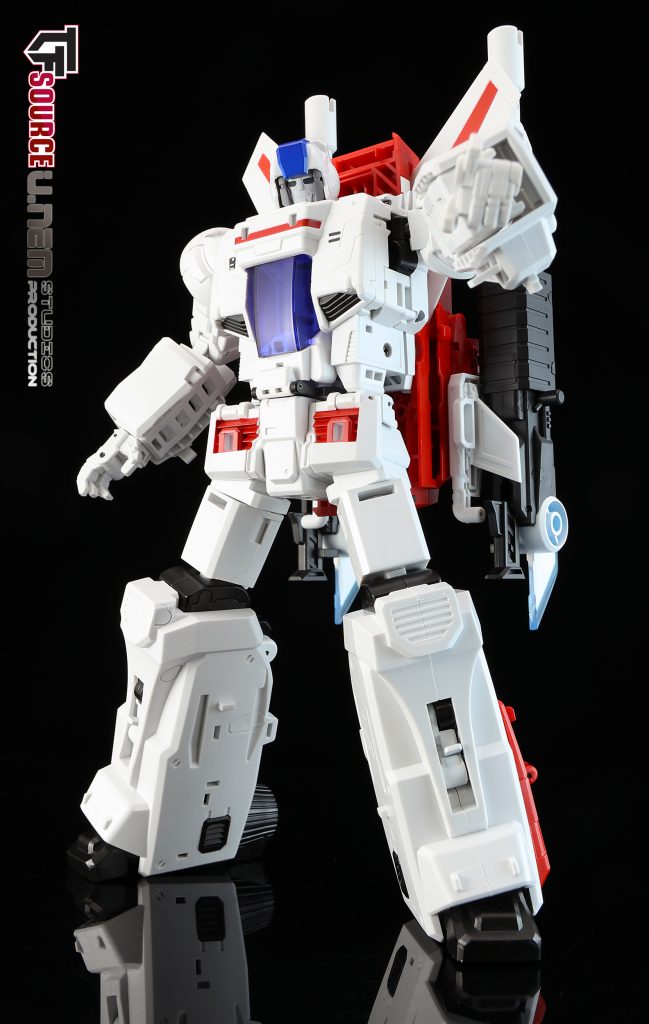 X2 Toys has always been better known for their upgrade kits, so it is a pleasant surprise to see them duking it out with some of the bigger boys in the 3rd Party arena. They bring us a much needed classics/CHUG-scaled figure in the form of Skycrusher. Yes, we do already have existing versions of the character in the market, but they have been lacking in my opinion. My experience with X2 Toys is limited to just their upgrade kits, so I’m eager to see how they deliver in terms of a full-fledged figure.

For a company which seldom move beyond producing kits, Skycrusher sure impresses just by holding him. He is heavy, weighing in at 800g! That’s heavier than most similarly sized figures out in the market, both official or otherwise. X2 Toys did not skimp on materials and the quality of build is fantastic, especially so for a lesser established company. Tabs (and there are good number of them) fit into the slots snugly and there are no alignment issues. This is something that some of the companies can take a leaf from. 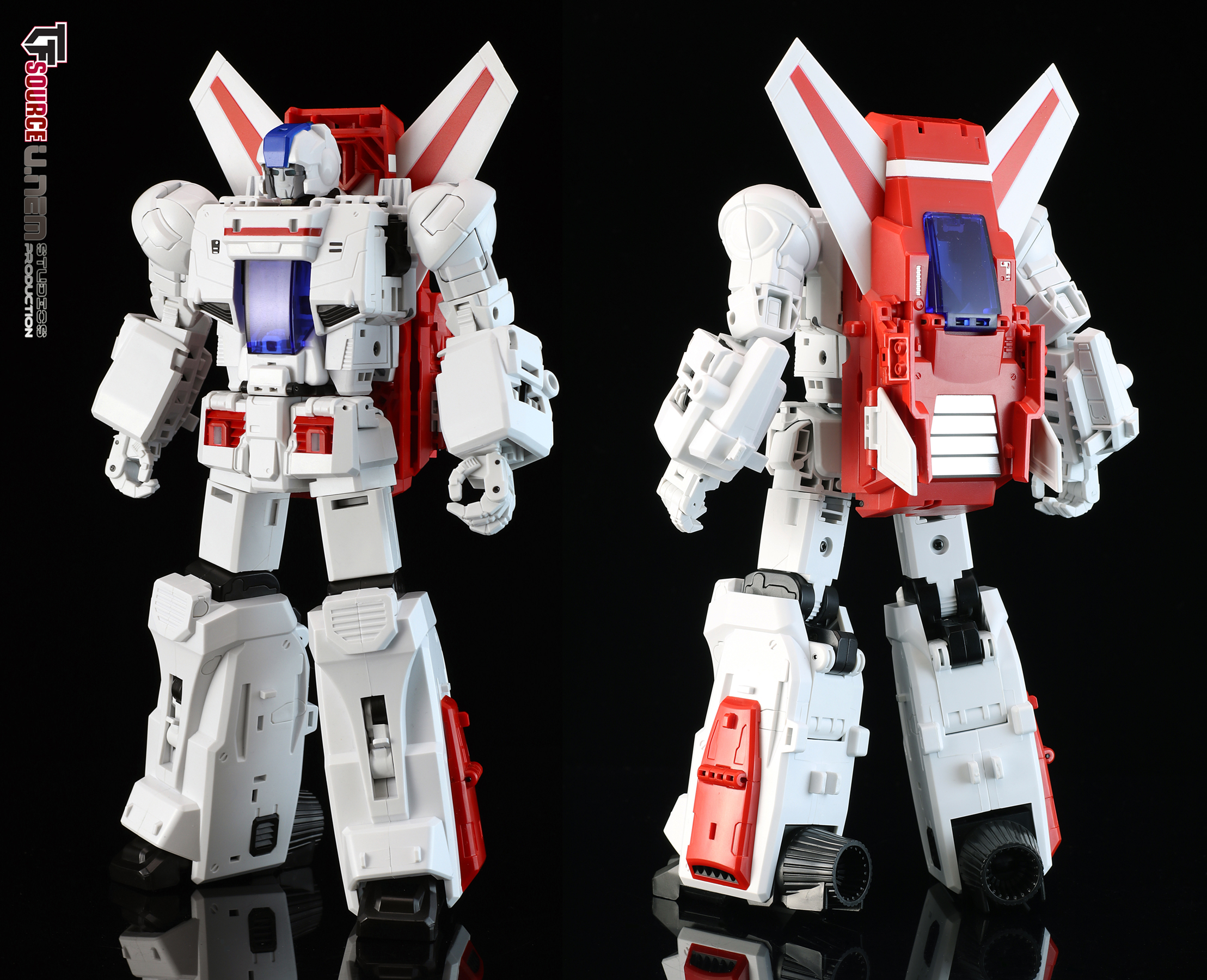 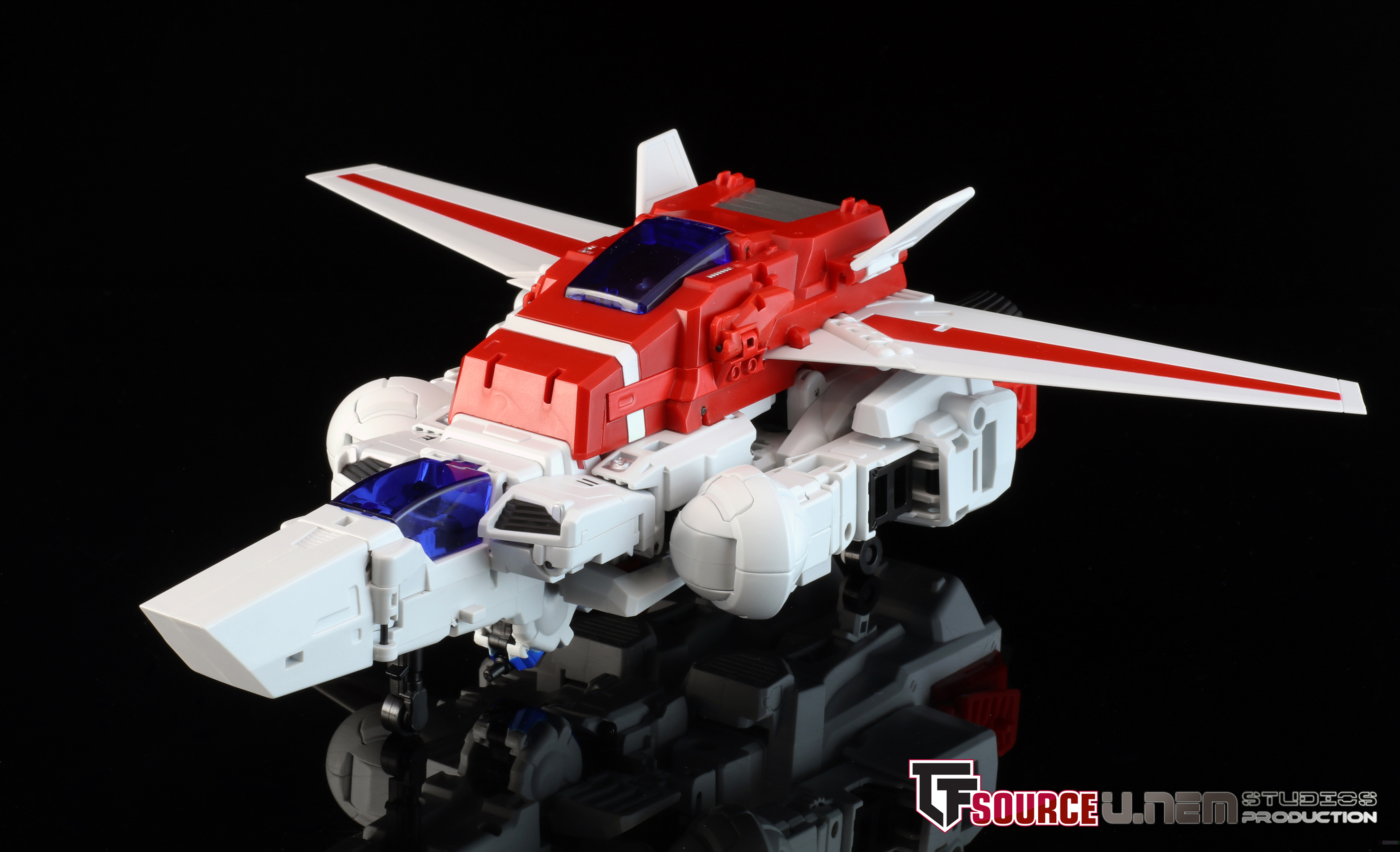 Skycrusher’s colour scheme and overall aesthetics immediately screams Jetfire. What pleases me a lot is how the designer fashioned the jet mode to be animation-accurate. Having said that, the figure is not without its drawbacks. It is quite apparent that the face sculpt leaves much to be desired. While it’s just a face, it really dampens the aesthetics of the figure. Seeing that the face forms the back portion of the headmaster (more on that later) and is detachable, I hope a better face kit comes along to replace the current one. Another gripe, though significantly minor, is that the wings cannot be adjusted to different angles to allow for some variation in jet mode.

Skycrusher scales well with the older classics verse figures, especially the official ones. 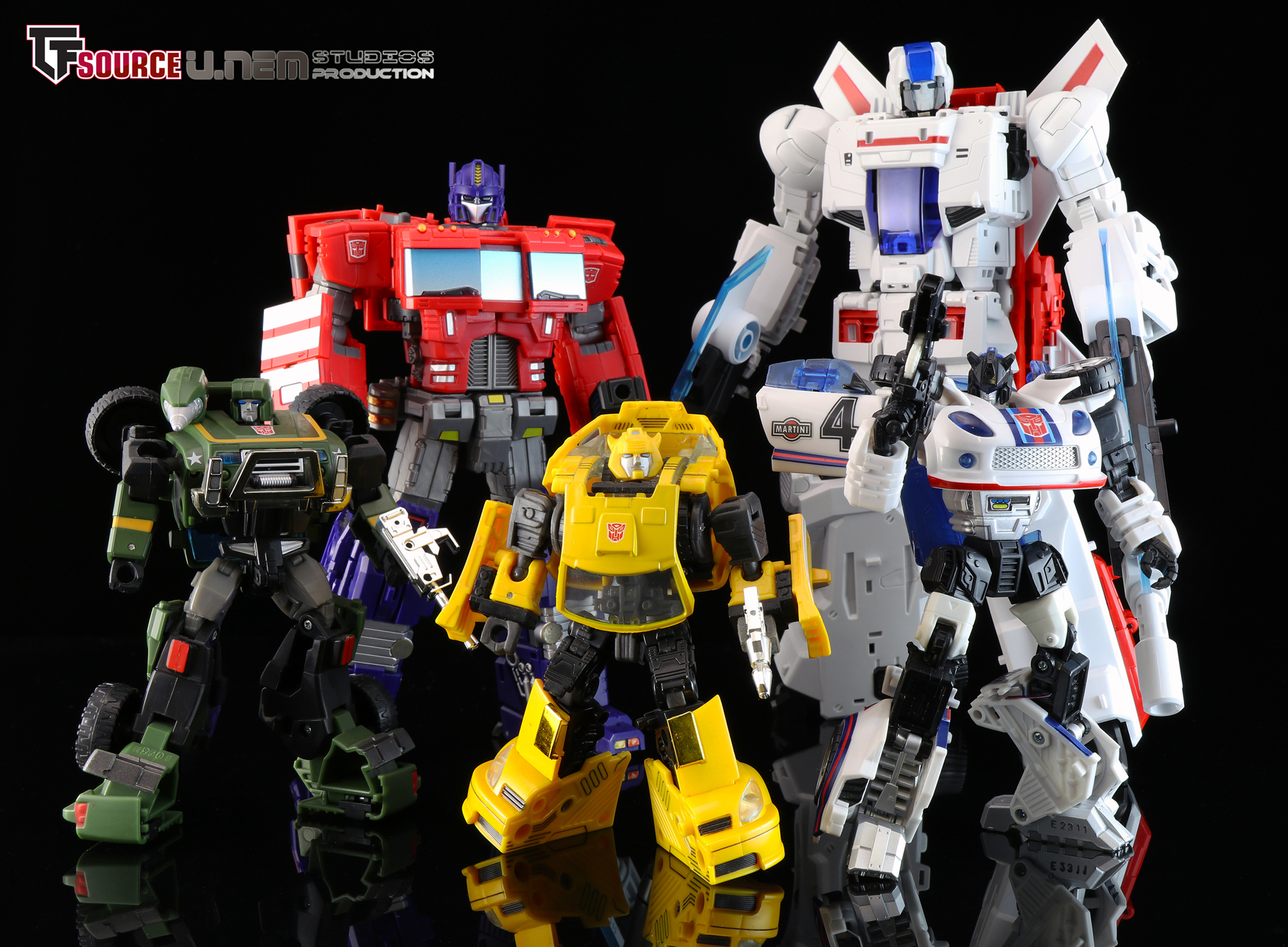 Transformation of Skycrusher is not overly complicated but yet still remains interesting. There are easier (and consequently boring) ways of transforming certain parts but the designer has decided to engage the fans with something more ingenious. There are also homages paid to the Variable Fighters that the original Jetfire figure was based on, including the popular Gerwalk mode and also incorporating the head gun under the jet cockpit. 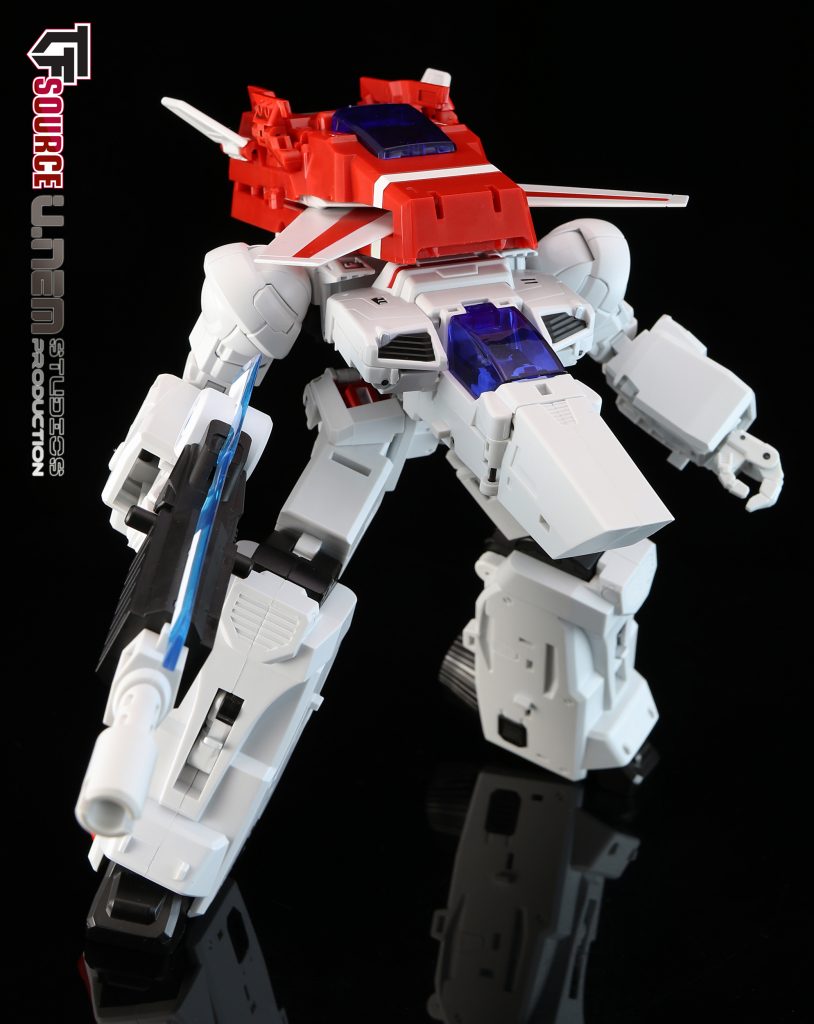 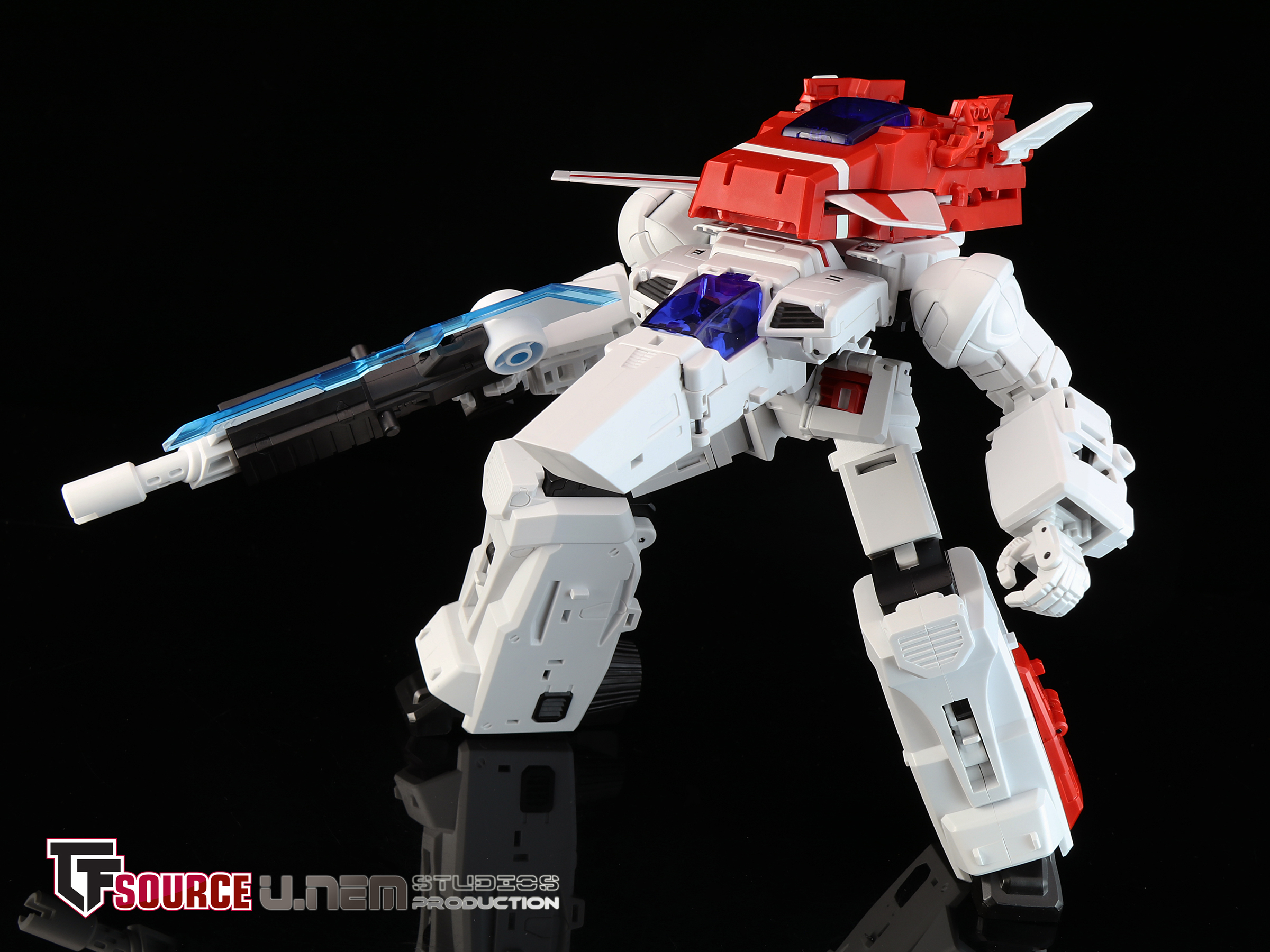 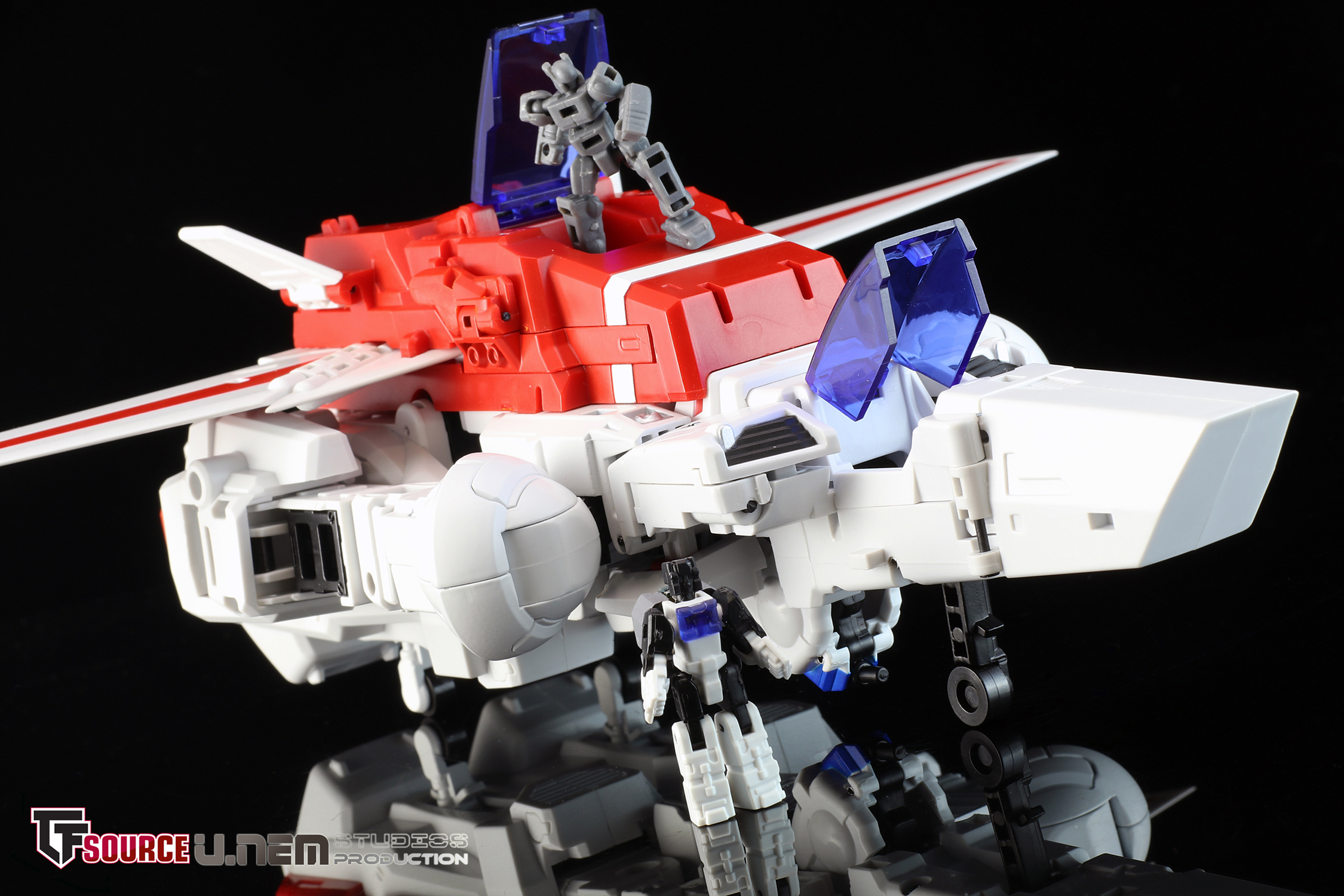 The figure comes with LED eyes, which I unfortunately do not have the right batteries to test out. His head also features the headmaster gimmick. While this was a nice attempt to blend Skycrusher in with the recent Titans Return series, I felt that this was unnecessary and may have resulted in the lacklustre head sculpt mentioned earlier.

Skycrusher comes with twin blasters which can be held in bot mode and also attached to the jet. 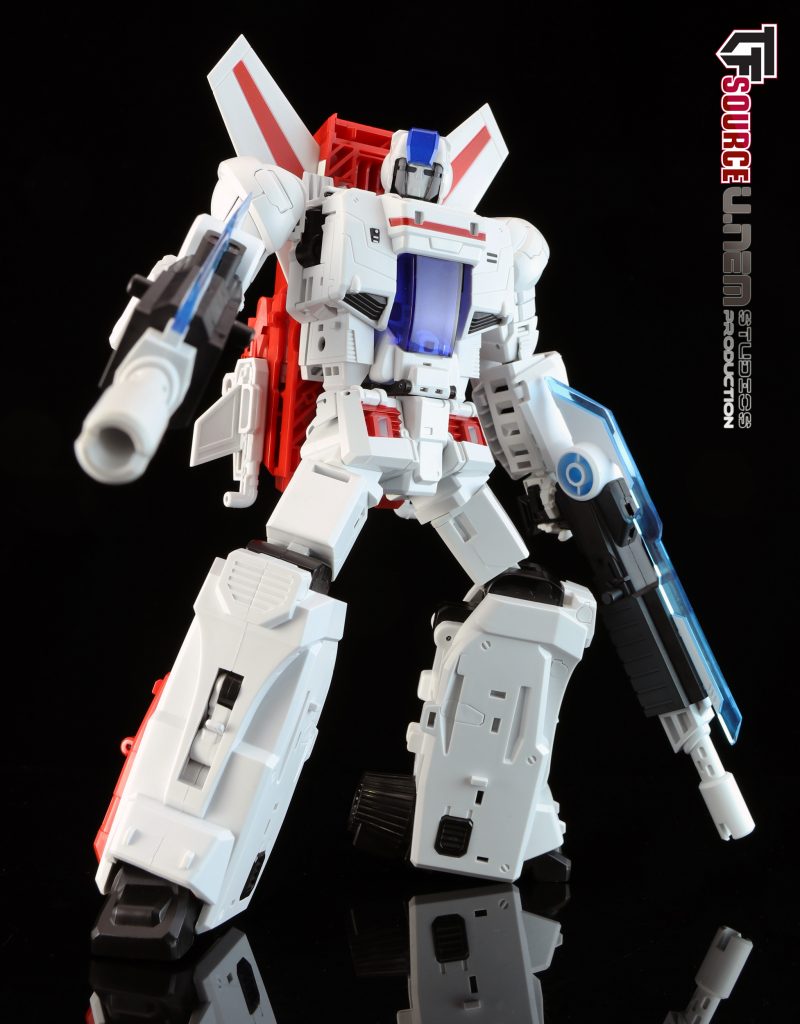 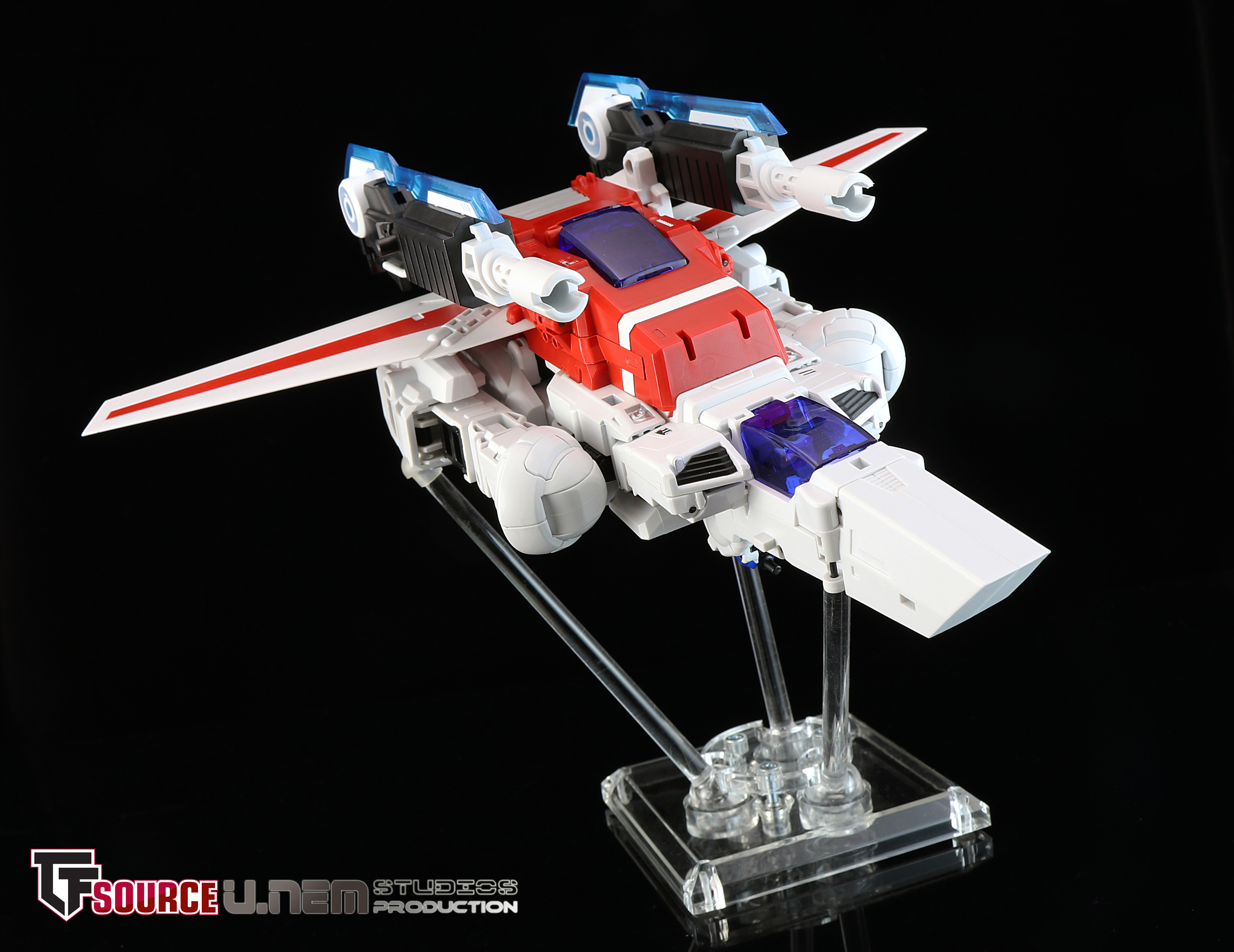 For additional play factor, the blasters can be converted to bladed melee weapons and also combined into a larger one. 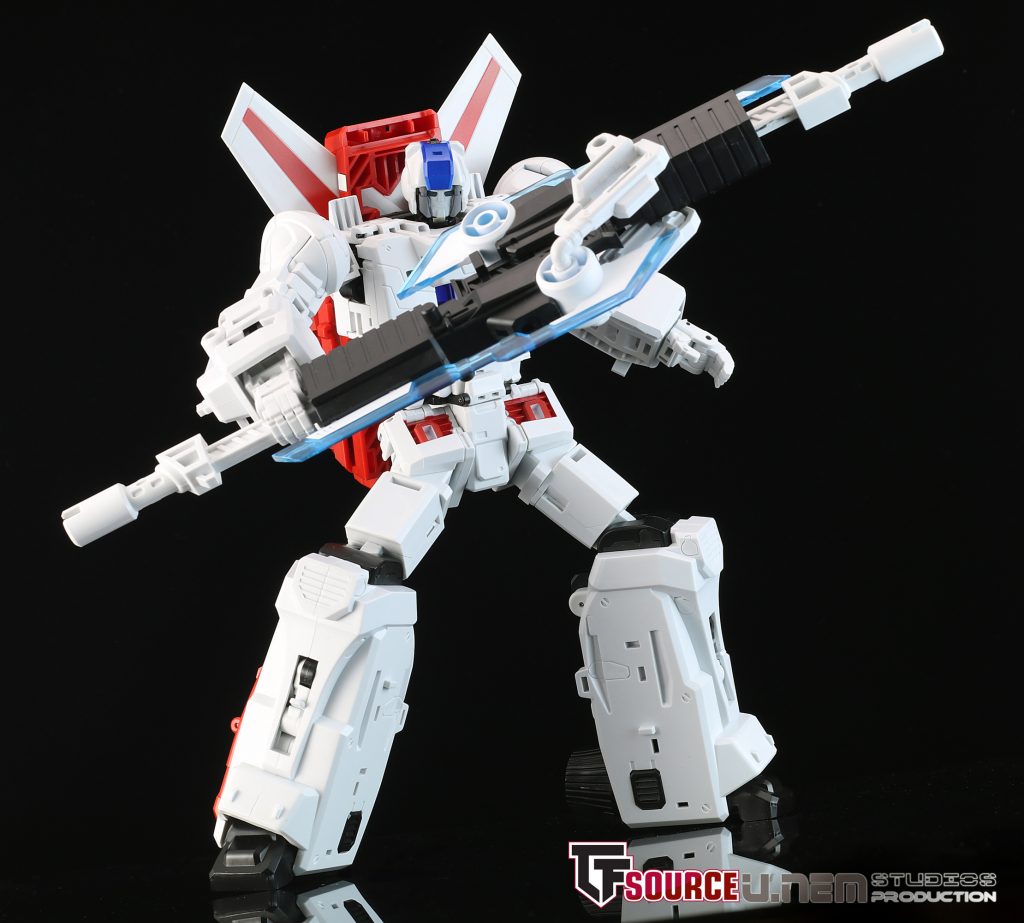 However, here comes another issue. Both handles of the melee weapons are made from the same mold, which resulted in the tab facing the wrong direction and not being able to be pegged into his left hand. It can still be held, just not firmly. Thankfully, Skycrusher is more of a blaster character so it is not such a big issue for me. 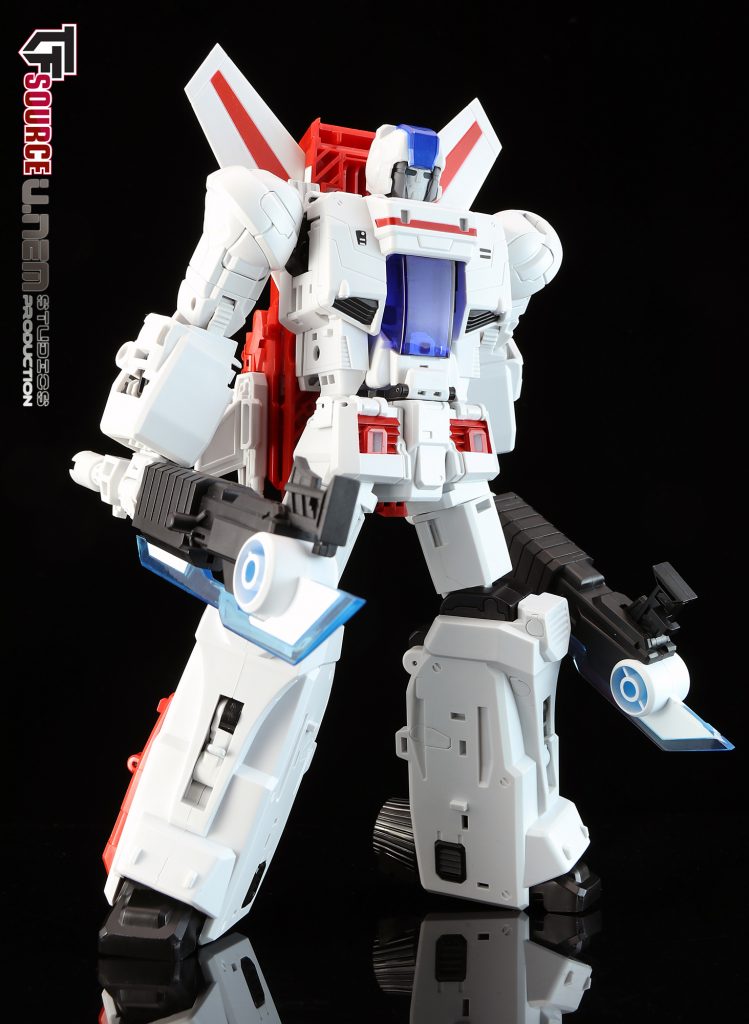 Skycrusher comes with good tight joints. However, the sheer weight of the figure will inevitably cause stress to the joints, especially to the friction joints at the hips which I expect to loosen over time. Posing the figure can also be challenging because of the weight. Proper heel spurs would have benefited the figure in this aspect. Another gripe is that the head movement is restricted by a hinge that sticks out from the back of the head.  Having said all these, the articulation of the figure is generally good. 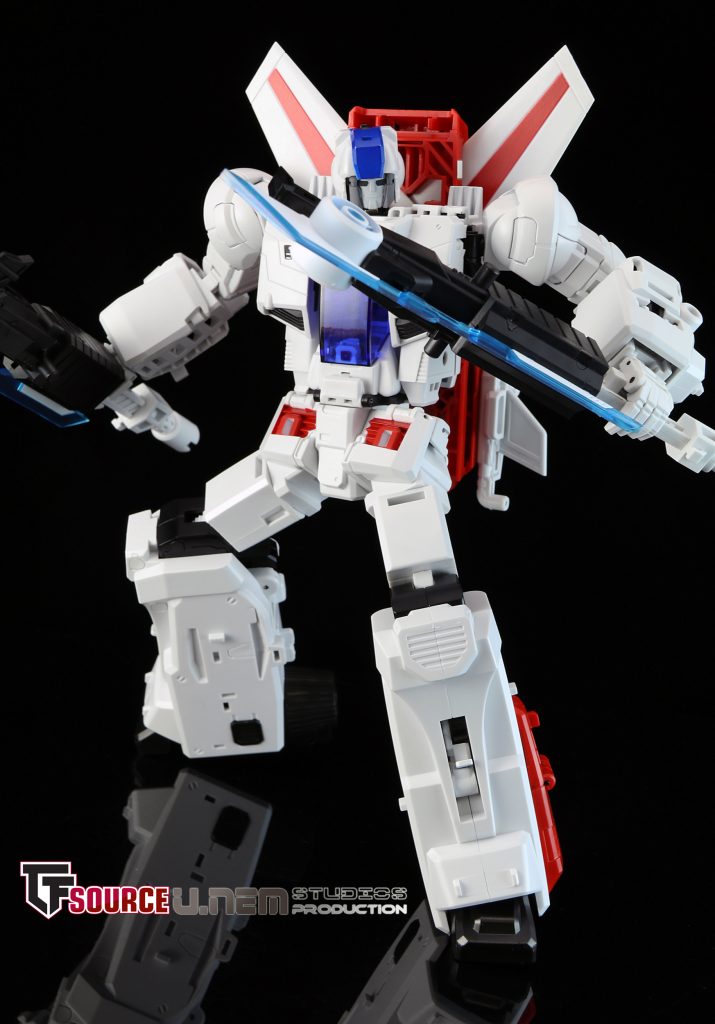 Skycrusher has left a relatively good first impression and I’ll be paying more attention to what X2 Toys have to offer in the future. I’ll recommend this to anyone looking for a proper Classics-verse Jetfire.