When I first saw Unique Toys’ Gahz’ranka photos online, I was not particularly impressed by how he looks. I could not quite put my finger on it. Was it the large patch of purple on his torso? Was it the blocky aesthetics? Well, something just did not sit right with me. Nonetheless, after having such a positive experience handling Archimonde, I was looking forward to changing my opinion regarding Gahz’ranka.

Just like Archimonde, Gahz’ranka is sturdily built. Expectedly, all parts hold together very well and nothing on him feel cheap. In my opinion, good quality plastic is as important as the design of the figure. I’ve see too many well-designed figures fall flat on execution simply because of the type of plastics used. Whatever standard Archimonde set, Gahz’ranka maintained. 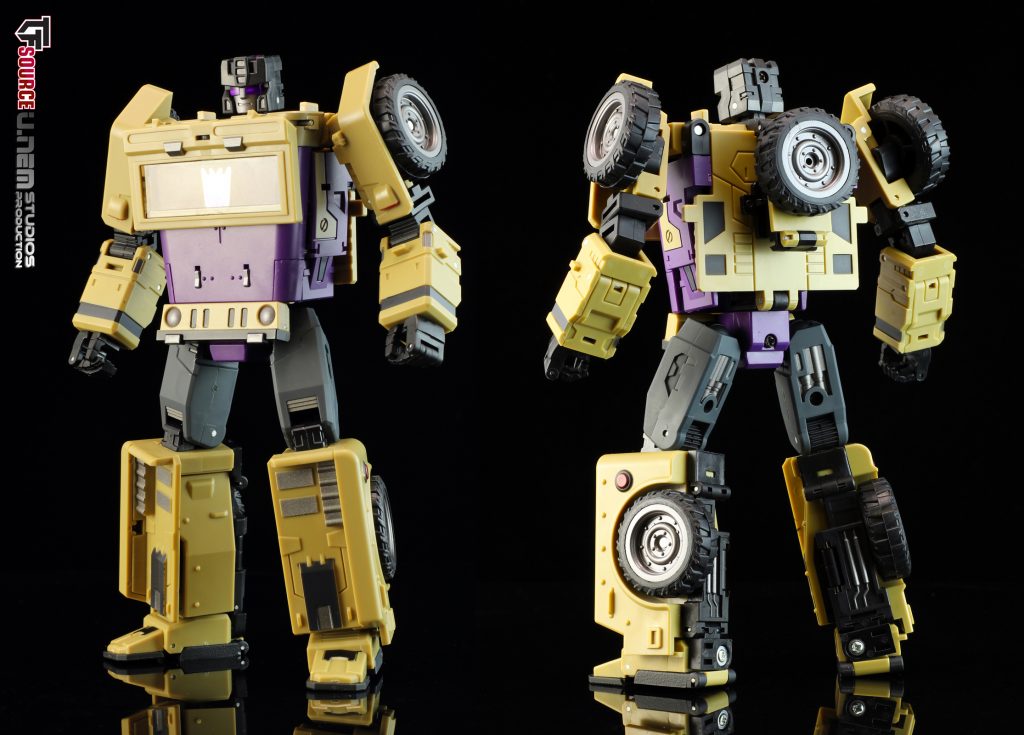 The first impression Gahz’ranka gives is how much he looks like his G1 animation self. That large patch of purple on his torso, together with the chest windscreen, plays a huge role in giving him a G1-ish look. He also comes with his G1-inspired “Scatter blaster” gun and “Gyro-Gun” pistol, which can be combined and mounted in his vehicular mode. Colour wise, Gahz’ranka is more wheat colour than the animation and toy’s bronze/gambage colour. I must admit that after transforming and posing him, I’m starting to appreciate the design from an aesthetic point of view. I’m pretty confident that most collectors will find that this is a figure which looks better in hand than in photos.

Scale wise, he has no issue fitting in with Masterpiece-scaled figures.

Just like Archimonde, Gahz’ranka’s transformation fascinates me. Unlike other figures where I marvel at the complexity of the transformation, it’s actually the opposite for Gahz’ranka. The straightforward and effective transformation reminds me of how most of the official figures are designed. I like how the parts tab together so nicely and everything just swings and slides into place so effortlessly. After one or two rounds of transforming him, you can properly do it with any instructional manuals or videos.

As mentioned, he comes with his gun and pistol, which can be used separately or combined. The gun can also be hand held or mounted on his arm. You’d have probably guessed by now which configuration I prefer (*cough* G1 *cough*)

Gahz’ranka spots the same range of articulation as Archimonde, with one noticeable exception. Due to the the pelvis/hips is designed, forward thigh movement is quite limited. His seats fold underneath his feet but can be folded out and be deployed as heel spurs should the need arise. It is probably not the official way to transform his feet but it’s an option nevertheless.

Both Gahz’ranka and Archimonde have managed to impress me so far. Looking forward to see how the other three members will fair and of course, the ultimate combined mode.