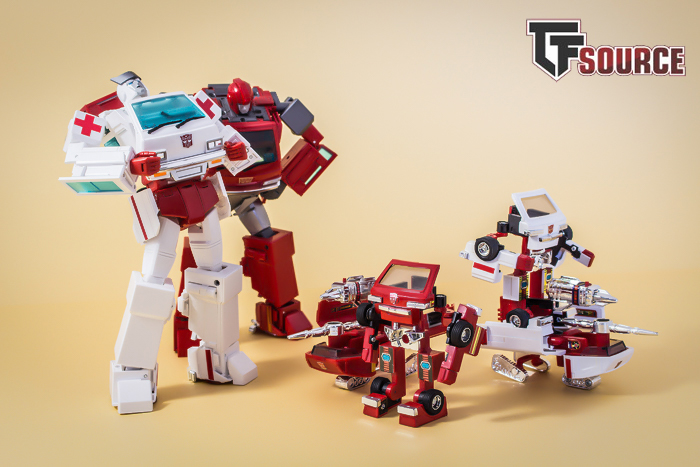 Generation 1 Transformers from the first series in 1984 are generally revered by a majority of the collecting community these days. Even those who don’t collect vintage Transformers have some degree of respect for what came first. Some even have knowledge and appreciation of the Japanese toy lines that came before Transformers, toy lines – like Takara’s Diaclone and Micro Change Series – from which many designs and moulds were employed in the first few years of The Transformers. In the case of the Autobot vans Ironhide and Ratchet, however, affection for their G1 toys is massively tempered by the depiction of these characters in the popular cartoon from the 1980s. They are widely considered to be some of the least show-accurate Transformers ever made, and as a result are often ridiculed, hated and maligned. I’m here to tell you that G1 Ratchet and Ironhide are, in fact, brilliant. 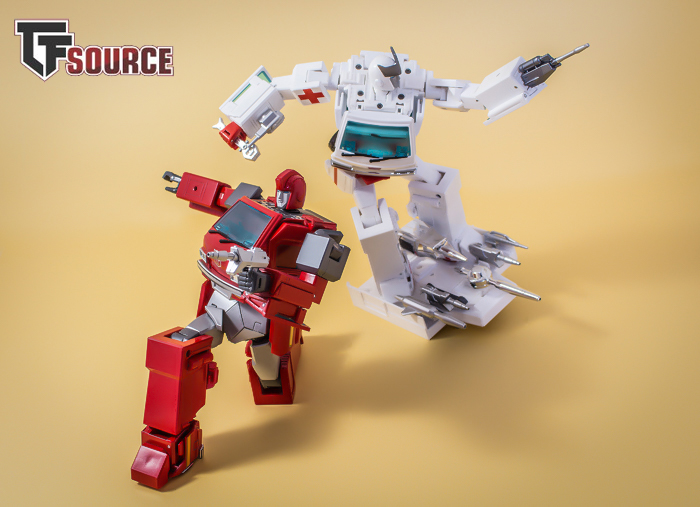 Characters that have historically had less-than-desirable vintage toy representations, like Ironhide, Ratchet, Wheelie and Kup, have been extremely well-served by recent official Transformers toy lines. Titans Return have made Kup and Wheelie must-haves and Masterpiece has elevated Ratchet and Ironhide to great heights, so good are the MP representations. Hip flap, butt-wheel-induced nightmares aside, they are hugely show accurate, dynamic and brilliant to transform. They even have a fair number of nods to the original vintage toys, but again the appreciation for those homages strikes me more as gentle ridicule than actual appreciation when it comes to the majority of the fandom. 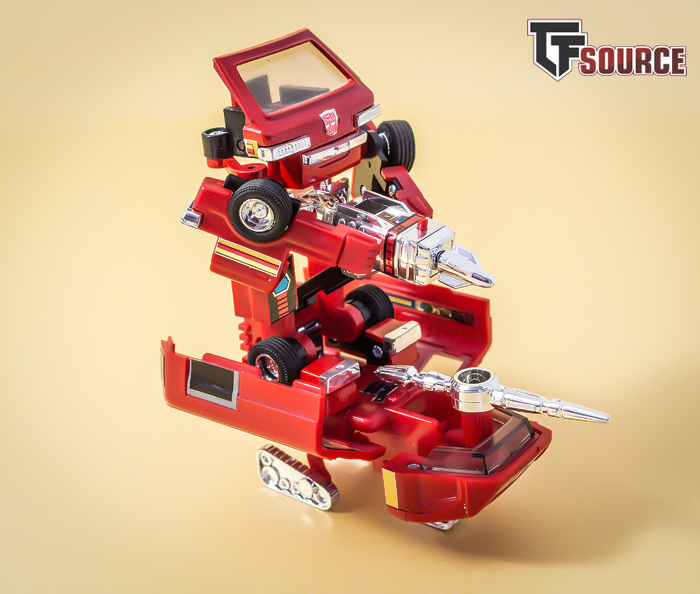 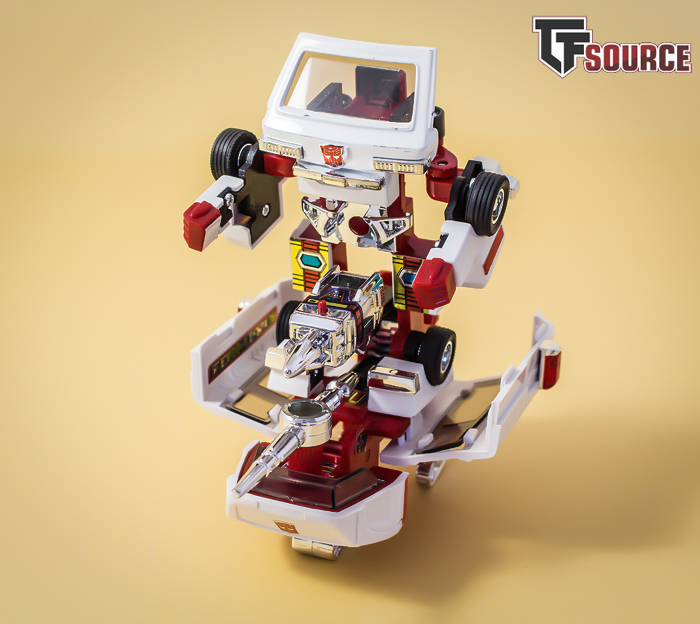 March 1982 in Japan, G1 Ironhide was originally the Takara Diaclone Car Robot No.2 Onebox Cherry Vanette (in black), and later, Ratchet was the No.4 Ambulance variant of it. To quote from my article on the Diaclone Onebox:

“This was also available as the Diakron DK-2 in North America in 1983 (and Finland in 1984/5) in black, together with a black release in Italy under the GiG Trasformer banner, and then came the red (Italy and Finland).”

Interestingly, neither got a proper standard store release as a Japanese G1 Transformers toy during the 1985 launch year for series 1 and 2. Ratchet was a well known mailaway and Ironhide didn’t get a vintage release. They were both widely released in the West, though. While their vehicle modes were pretty accurate to the show, it is the robot modes that have plagued their legend ever since. Legs and arms, sure they had them, but they had no discernible robot heads! Hasbro decided to get around that fact by using stickers with a face on them. Judge for yourself… 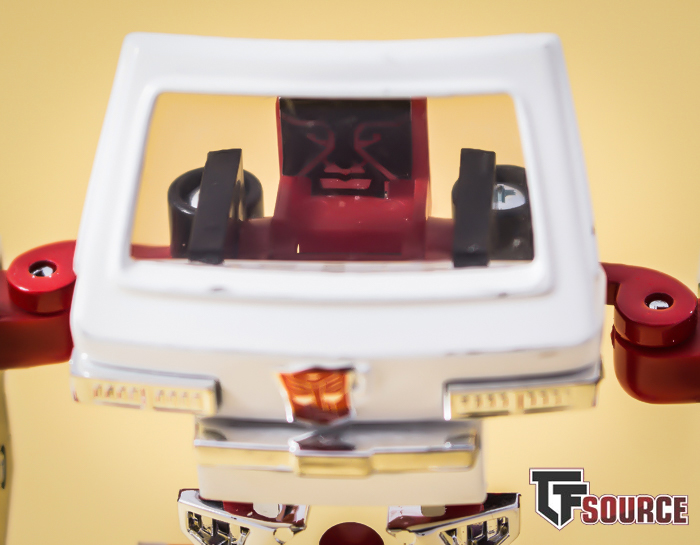 This certainly didn’t cut the mustard with many at the time, and certainly not now with collectors who take the animation models to be the definitive look for these characters. I agree that if you want to judge Ironhide and Ratchet purely on how well they represented the cartoon characters – who had a pretty major role in the series originally – then I completely understand the general lack of affection and disappointment over these toys. They are more often than not the least valuable of the original G1 Autobot cars, both vintage and reissue.

This is where I tell you how these ugly ducklings are, in fact, timeless swans. 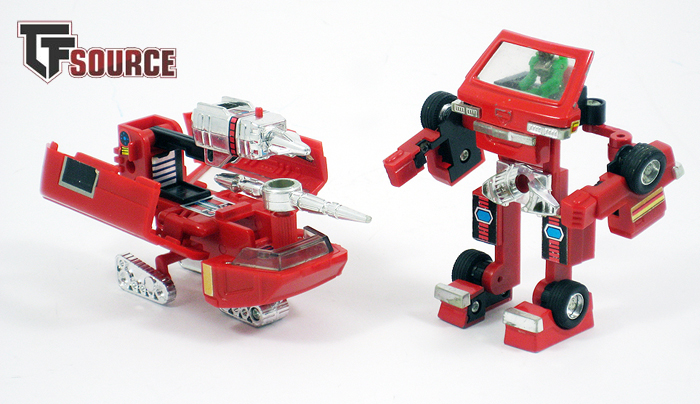 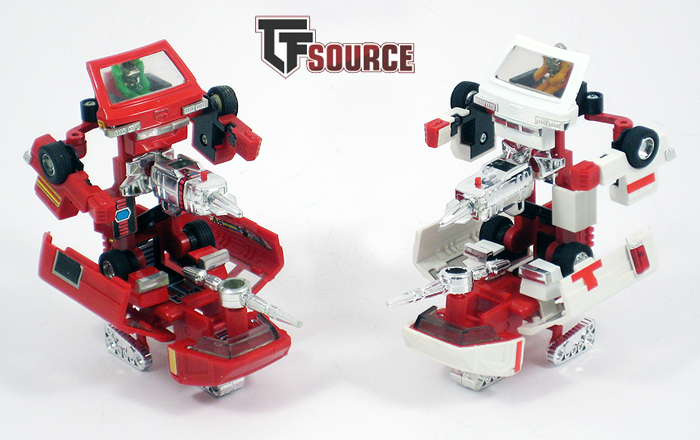 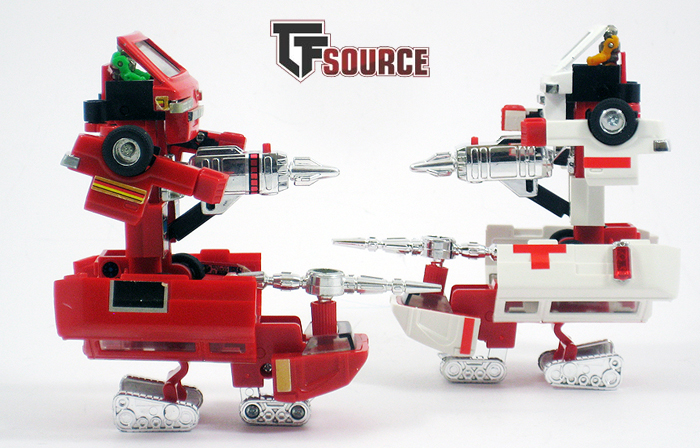 The original Takara Diaclone line was not about sentient robots. Diaclone – or Diamond Cyclone to give it the full name – was a toy line about alien invaders (Waruders) being fought off by Earth’s defending forces (Diaclone), and the robots were all piloted mecha. Most Diaclone toys had room and compatibility built in for small Dia-nauts, or Diaclone pilots/drivers as they’re also known. These Dia-nauts could fit into cockpits, hatches and use their magnetic feet to attach to various surfaces like the inside of a Diaclone base or trailer. That is, of course, why so many early G1 Transformers had cockpits, seats and the like. In the above pictures, you can see Diaclone versions of Ironhide and Ratchet being piloted by vintage Dia-nauts. It all suddenly starts to click into place, doesn’t it? 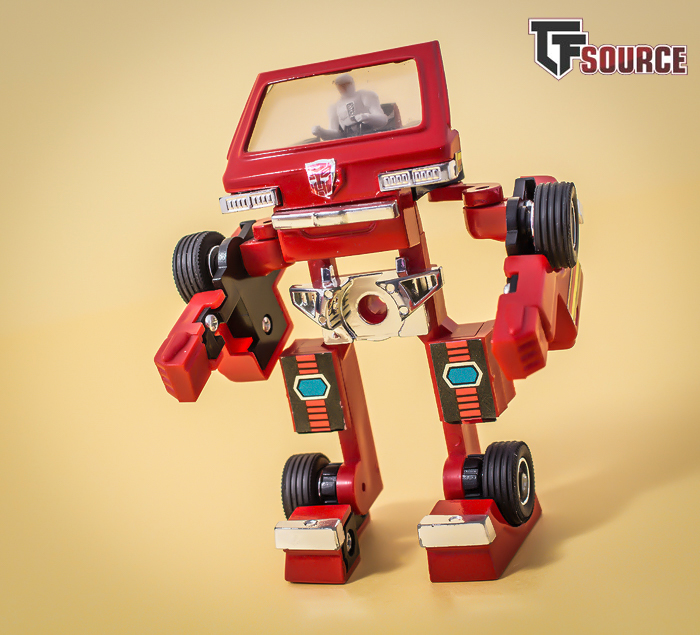 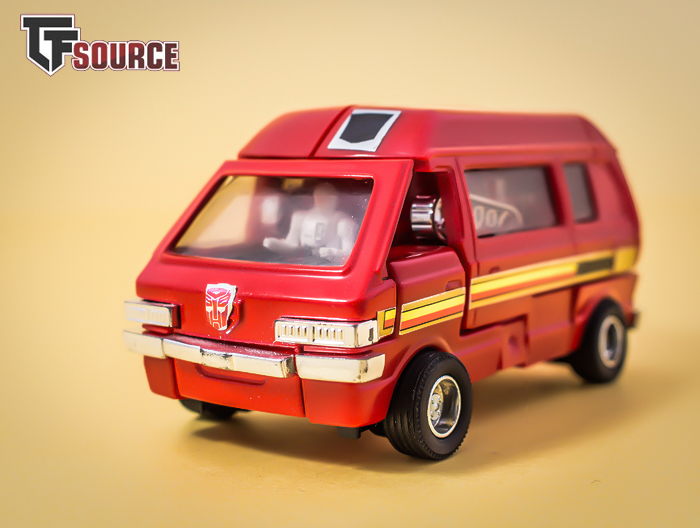 The lack of a robot head makes perfect sense when you see this toy for what it was supposed to be, a massive mechanical suit – and base – for smaller human-sized pilots and operators to use in battle or for repair. Where Transformers Ironhide would have a head, the Diaclone Onebox has a seat with a protective screen for the Dia-naut. And don’t knock the articulation here, we have forward and backward rocking ankles plus a fair amount of motion in the arms, rotating wrists as well as a chest/abdomen that can tilt! It doesn’t look half bad with the newer TakaraTomy Diaclone Dia-nauts piloting it either. That includes vehicle mode. 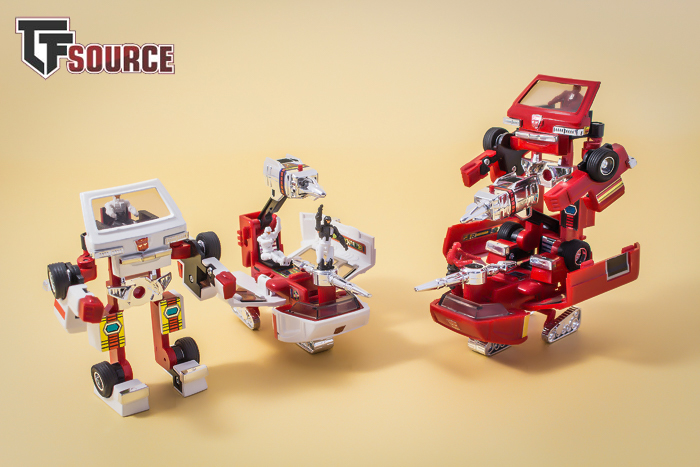 Think of the era that Ironhide and Ratchet stand for in this form. They have real-life accurate vehicle modes to a decent degree not seen in many mainline Transformers toys today. They were built to be piloted by magnetic mini-figures that totally completed their look and could interact with pretty much every part of the toy’s design. They came with detachable and integrated bases that could fire rockets (in Asia, Italy and Finland anyway!) and they could have the robot displayed alongside or even manning the base. They had rubber tyres, die-cast metal and enough chrome to blind you on a sunny day! 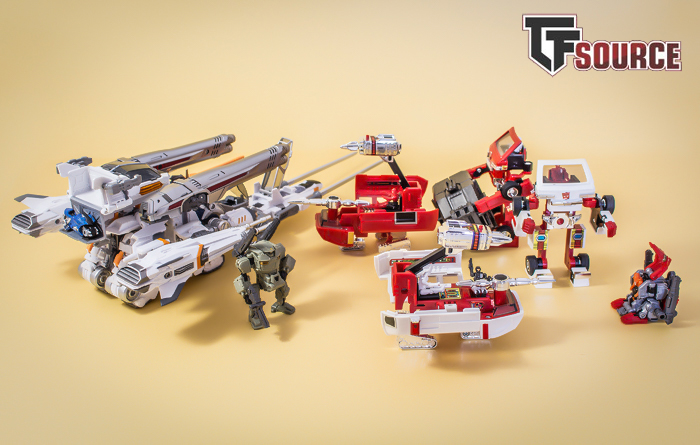 Not only were they completely representative of the toy line and its core concept, but when you consider the playability they had as robots/mechs, vehicles AND bases, they could easily walk away with the title of best sub-Convoy Diaclone Car Robot. Just look how effortlessly they can fit into a diorama with the more sci-fi Diaclone vehicles that TakaraTomy are basing their Dia-Battles V2 and forthcoming Big Powered releases on. They are, after all, to the same scale. 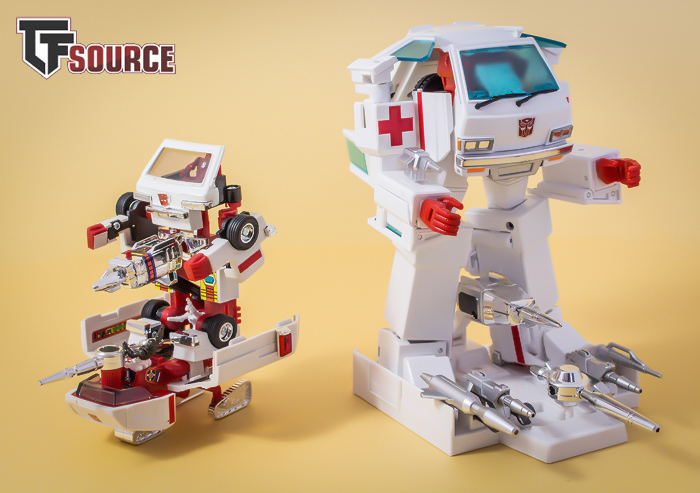 They haven’t dated and they are not pointless. There is solid reasoning and history behind why the toys were designed the way they were. The fact that they don’t translate into good Generation 1 Transformers toys that mimic the humanoid cartoon representation is not the fault of the original toys. Skids was lucky, he just lost a scooter, but Ironhide and Ratchet were completely robbed of their raison d’être and condemned to a life of ridicule. Luckily for me, Diaclone is a huge part of what makes Transformers collecting fun, and mixing toy lines or generations of toy lines does not bother me in the slightest, even less so when there is an actual historical and design significance to that mixing. To me, Ironhide and Ratchet’s G1 toys are perfection. They accomplish so much, and hopefully with the resurgence of the non-Transformers Diaclone series and collectors’ hunger to find compatible accessories and figures, as well as the extraordinarily cartoon-satisfying Masterpiece Ironhide and Ratchet and the hugely popular Titan Master play pattern of Titans Return – appreciation for these beautiful toys will grow over time. 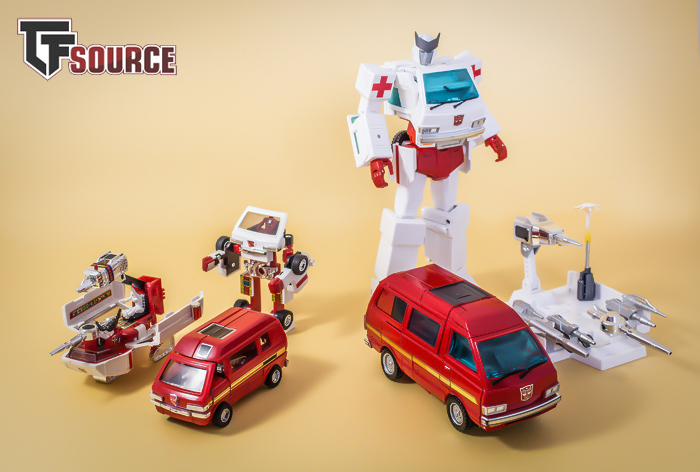 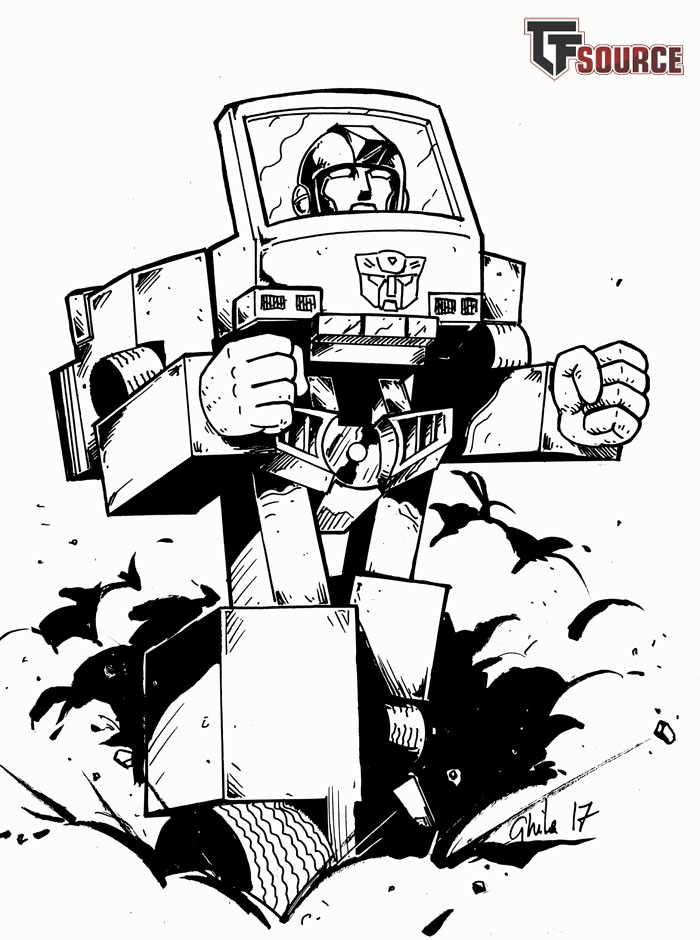