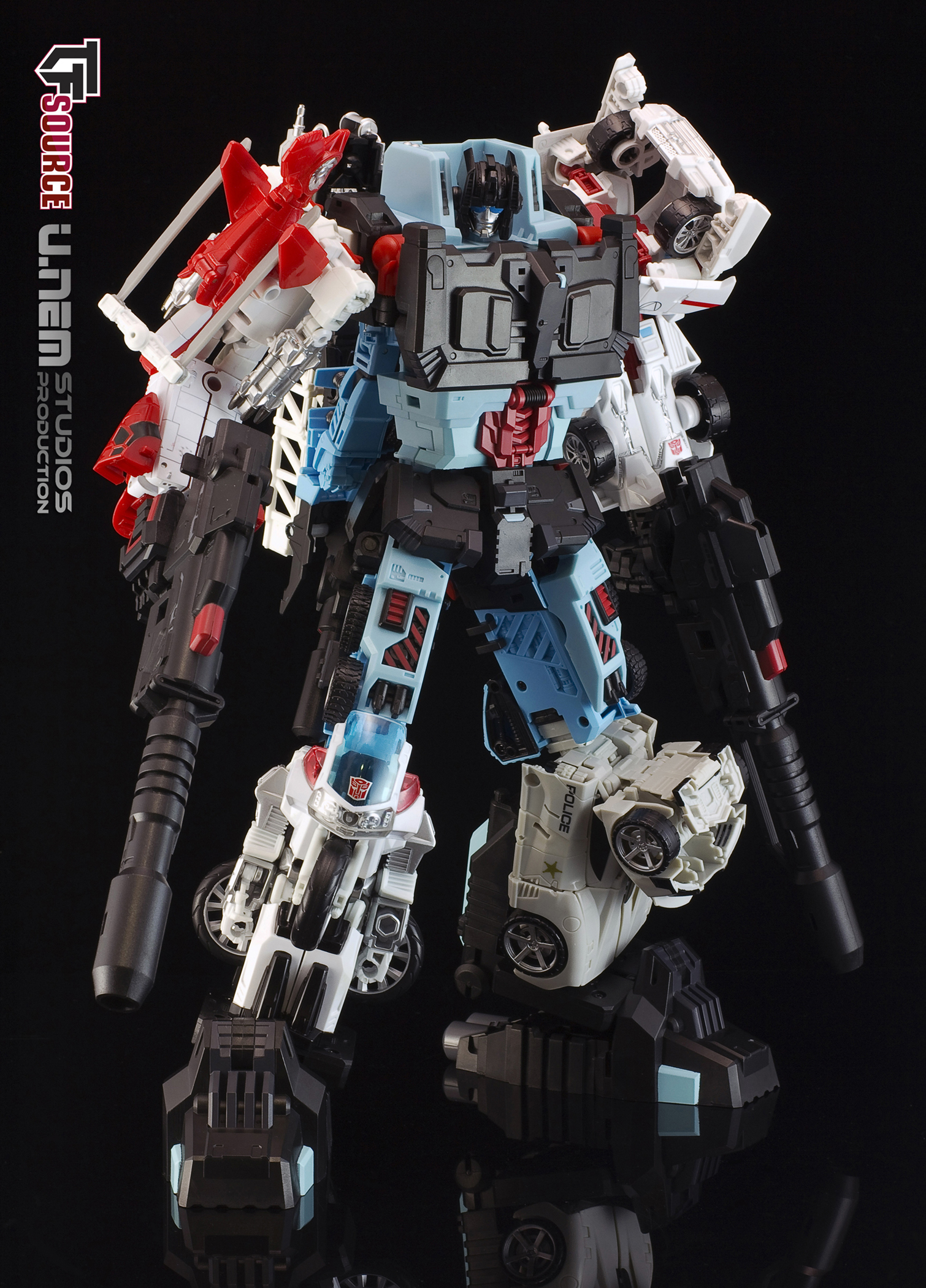 For those who were around to witness the birth of the 3rd Party phenomenon, they would probably have some fond memories of the humble beginnings of upgrade kits designed to enhance the aesthetics and/or articulation for official figures. Fast-forward to nearly a decade later, upgrade kits are still around to offer collectors the option.

C+ Custom is the new kid on the block, bringing us a kit to enhance the Combiner Wars/Unite Warriors Defensor figure. I must admit, earlier images of the prototype kit already had me sold. The asethetics, in particular the proportions, were pleasing for me. And let’s be honest, the original base figure was nothing to shout about. Even with the other earlier upgrade kit, there was still something lacking. Needless to say, I was pretty excited to have a go at C+ Custom’s first product. Well, let’s see how it measures up.

In hand, the plastic quality and build of the kit feels as good as it looks from the images online. Very sturdy build on my copy and it can take some rough handling when being installed onto the base figure. The kit is made up of plastics molded in colour with some paint applications. Paint applications are neat and subtle. 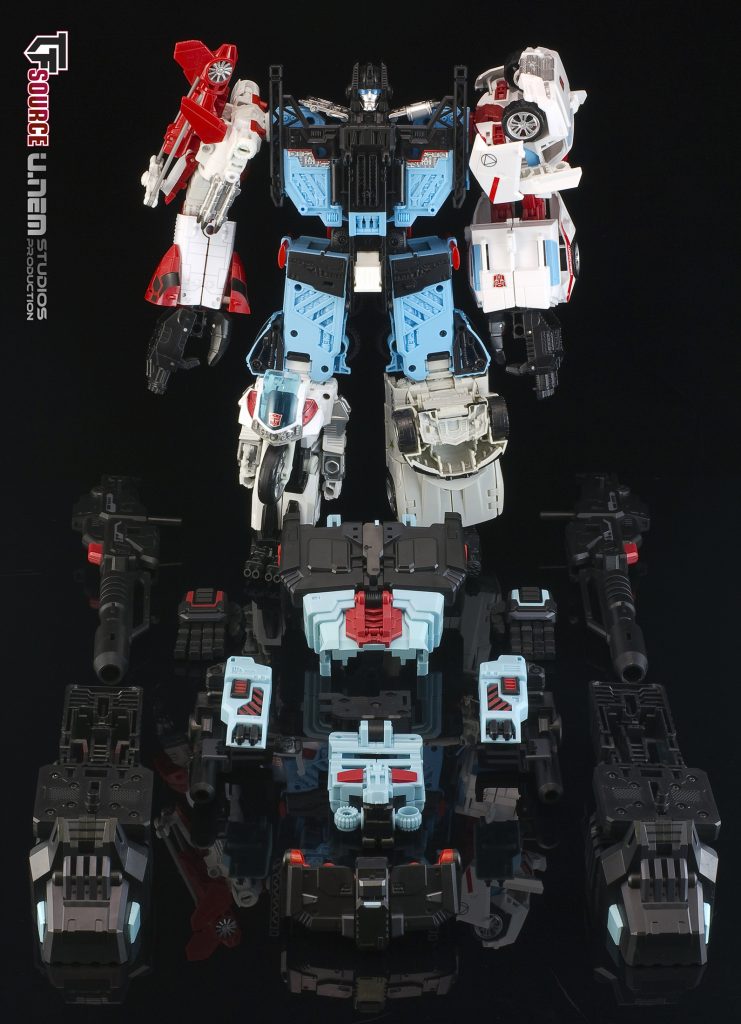 The kit requires switching out Hotspot’s torso and simple clip on installation of calf covers which double as Defensor’s thighs. There are quite a number of screws involved in the installation so it would be advisable to have a clear working space when doing this. The kit also comes with a pair of springs which I feel are pretty similar to the existing pair on Hotspot. Not sure if they will make a big difference but I still switched those out nevertheless. Another point to note is that Hotspot’s legs will need to be swapped in order for the kit to work. The next few photos will give you an idea what I mean. Once you are done with this part, you are pretty much set. 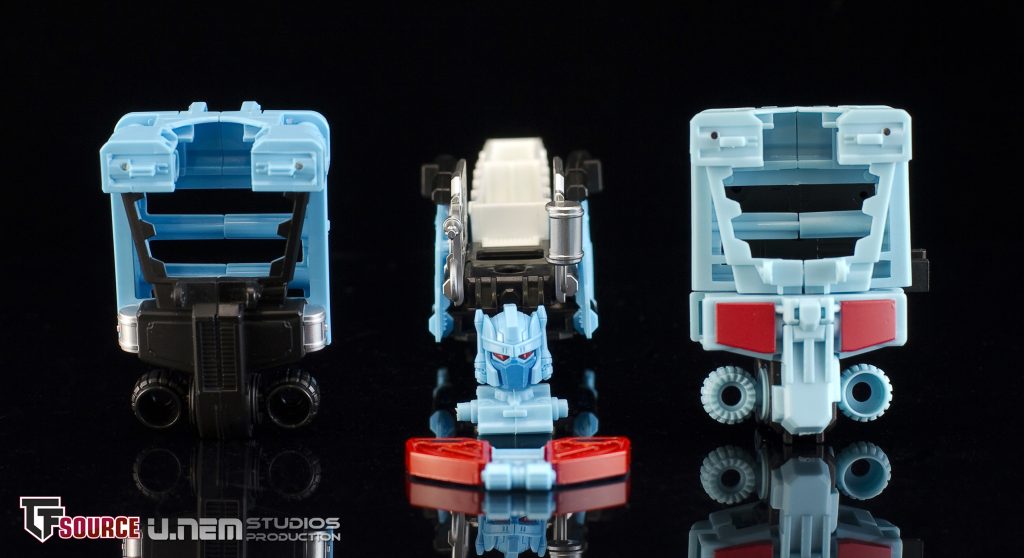 Now would be a good time to point out that I am using a Unite Warriors Defensor. The kit which I received had a different shade of blue from the Unite Warriors blue (and also seems to be different from the earlier ones which were sent out to other reviewers). This blue looks like it will match the blue on the Combiner Wars Hotspot. However, without having the actual figure to compare with, I cannot be certain. Nonetheless, the difference in shade did not bother me too much and, in my humble opinion, does not affect the overall outcome in combined mode. 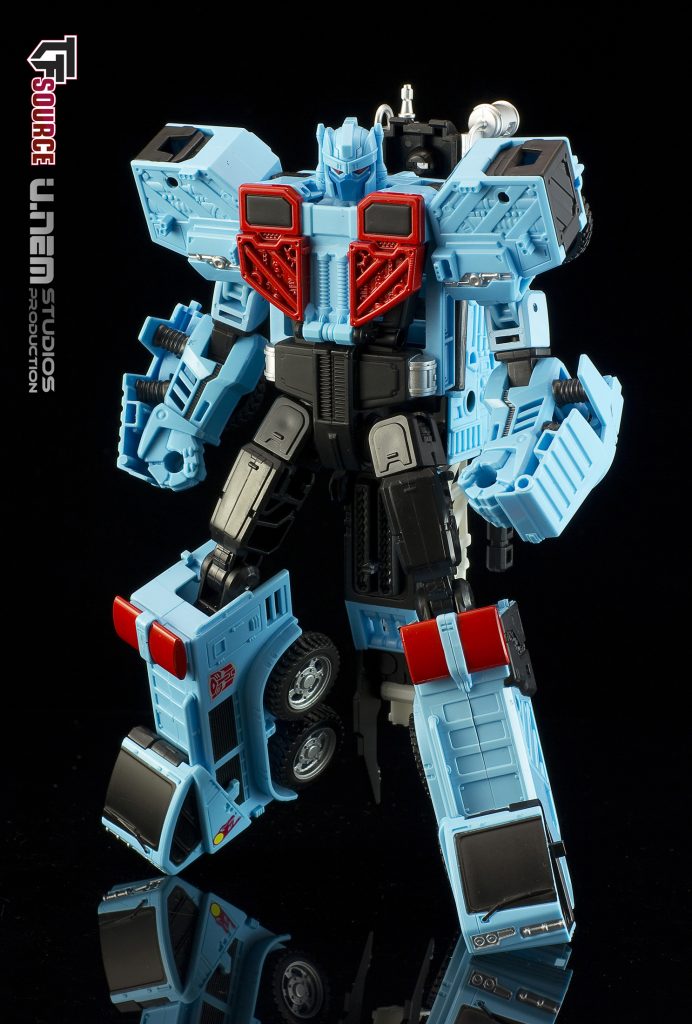 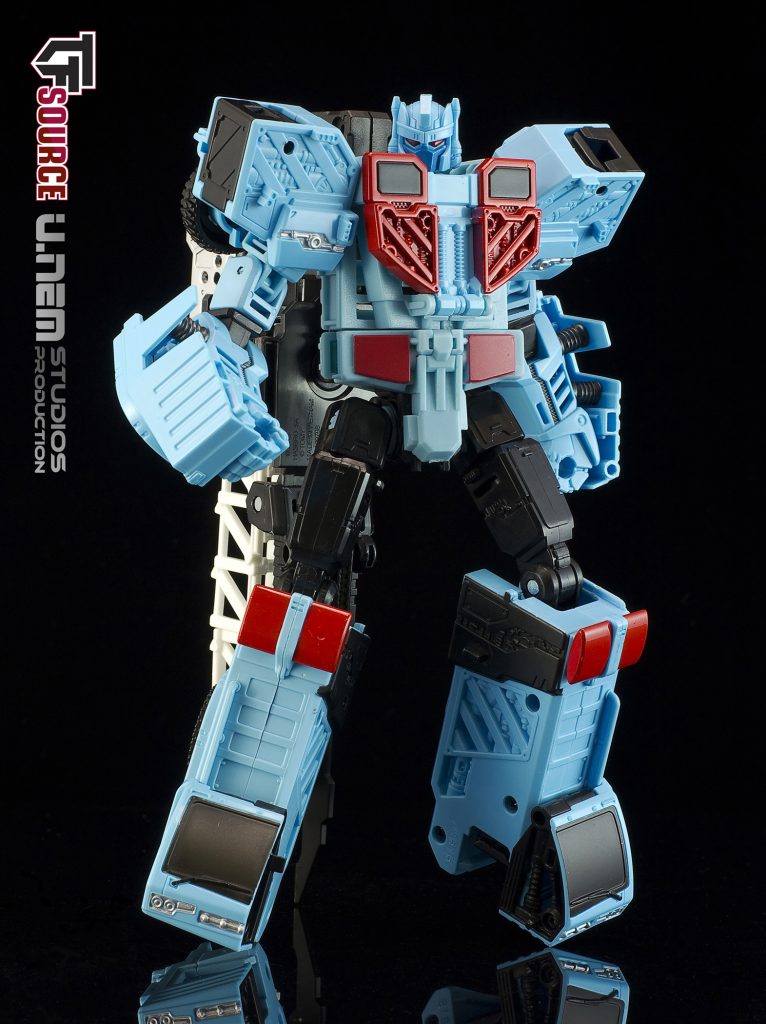 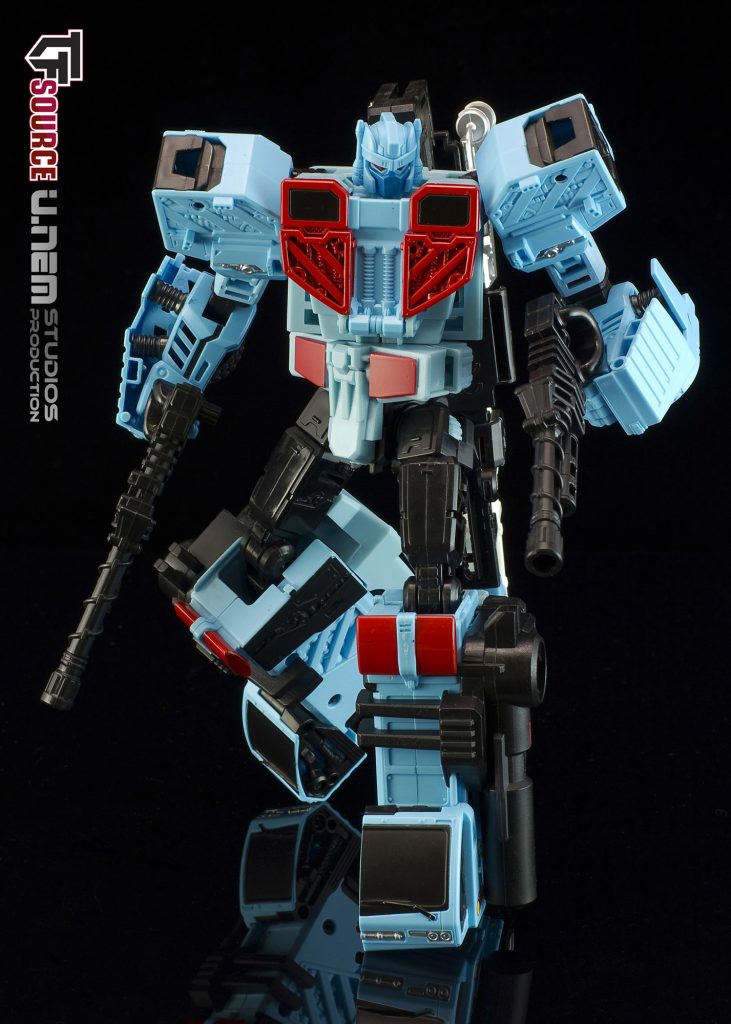 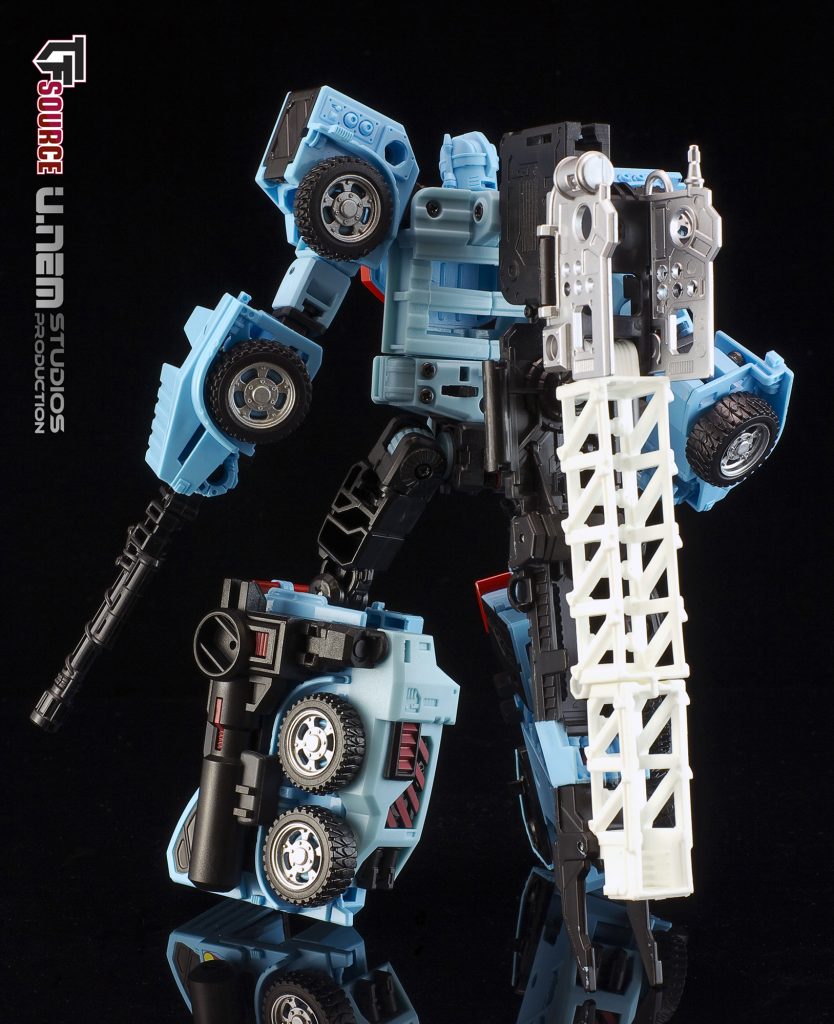 The torso and hip plates can be combined to form a shield for Hotspot in bot mode. Unfortunately, the sheer weight of the shield is more than what Hotspot’s joint can handle. 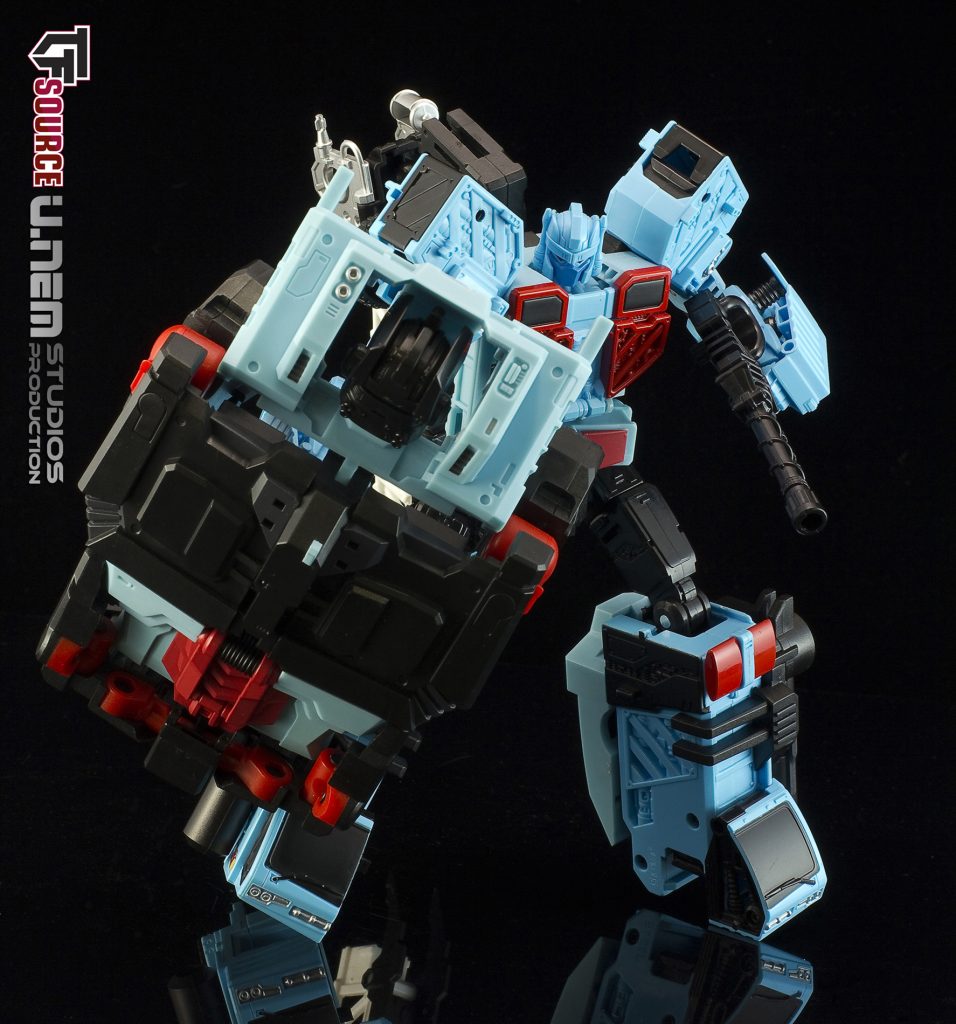 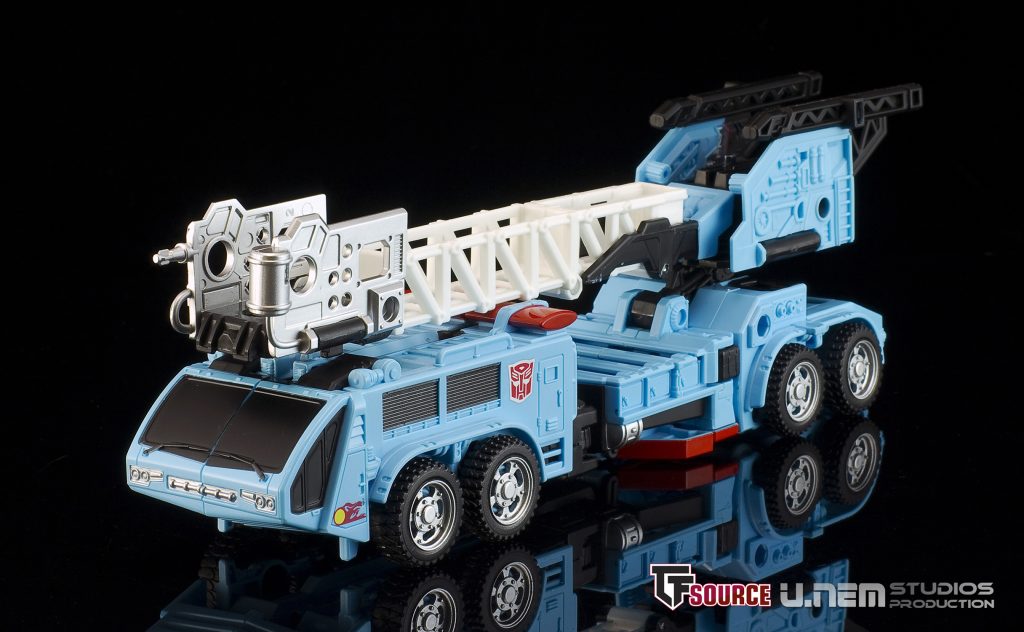 The upgrade kit however comprises Hotspot’s alt mode at the ladder section. While it’s unlikely that anyone would buy this kit for the alt mode, one cannot help but wonder if more could have been done to improve this aspect of the kit. 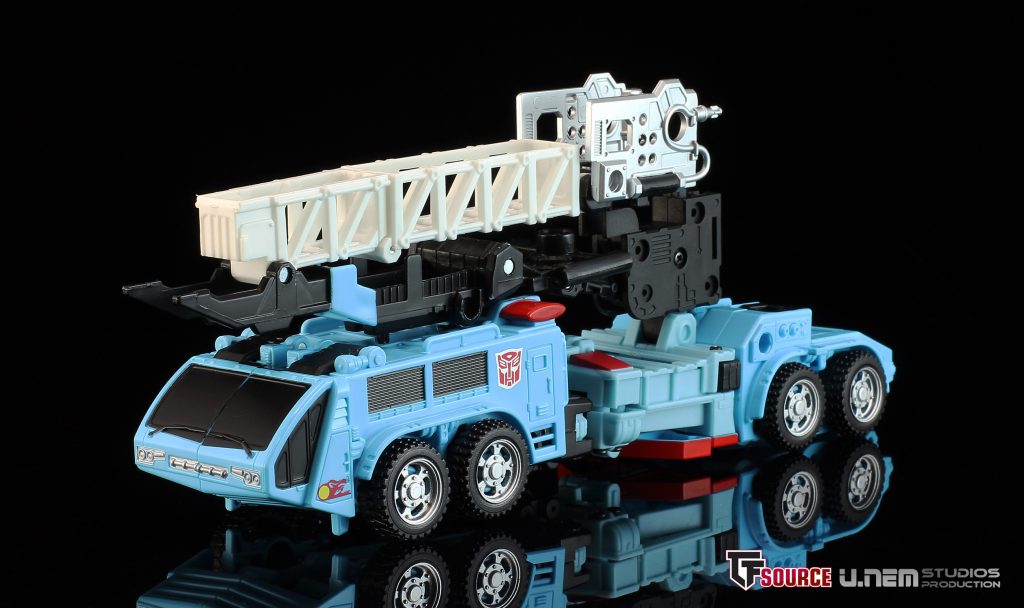 Defensor’s torso, hands, feet and blasters from the upgrade kit can also be mounted onto Hotspot in alt mode, albeit in a somewhat awkward fashion. Again, not the strongest point of the kit but nevertheless, it is an option. It’s possible that there may be other configurations to this setup. 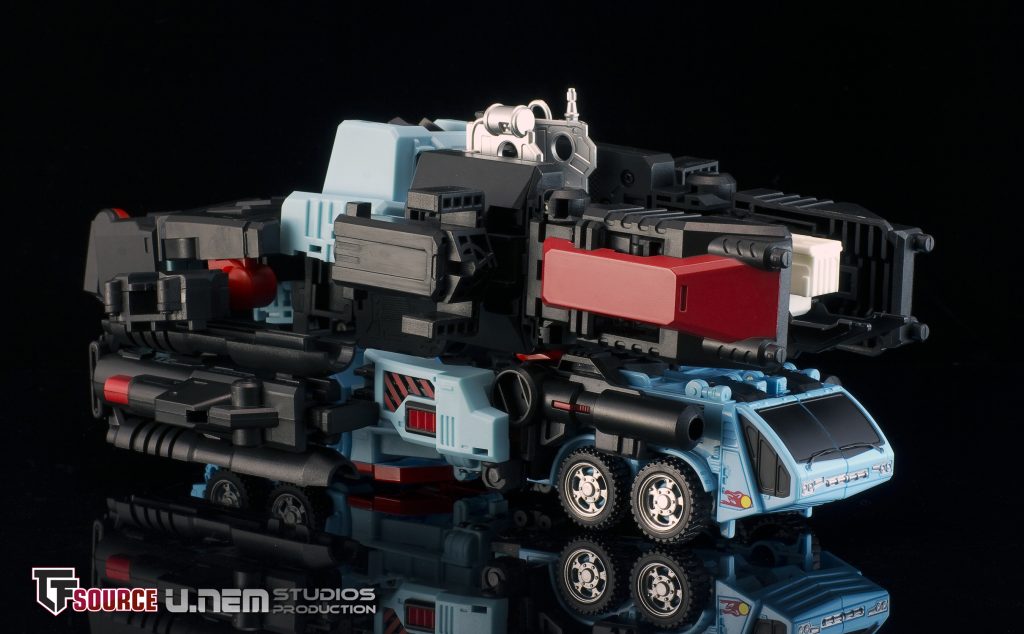 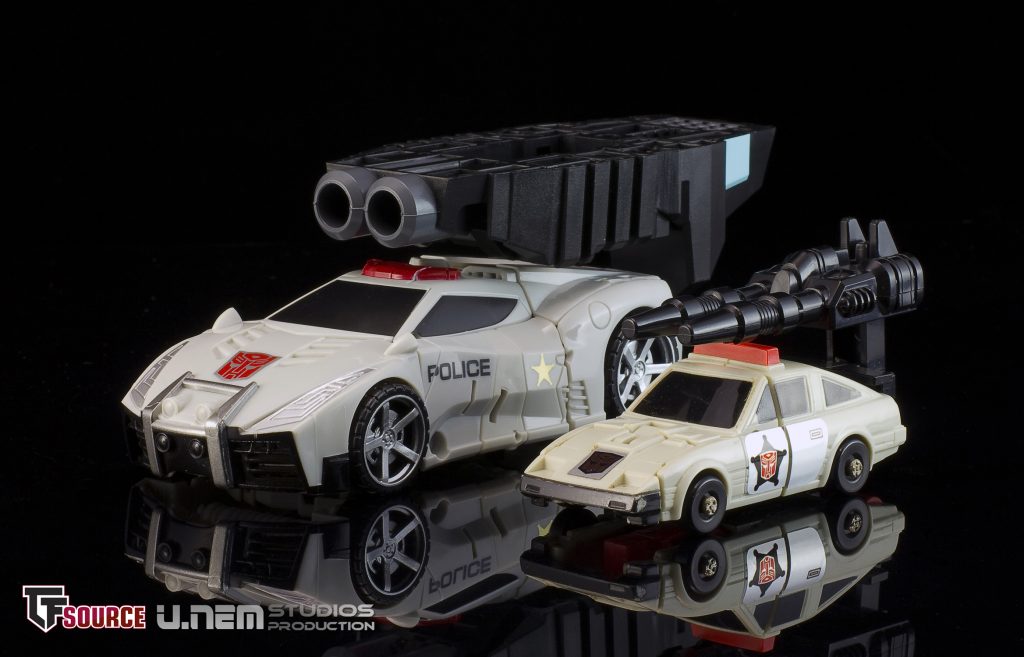 The fists can also be mounted on the sides of Groove in alt mode to give that motorcycle saddlebag look. 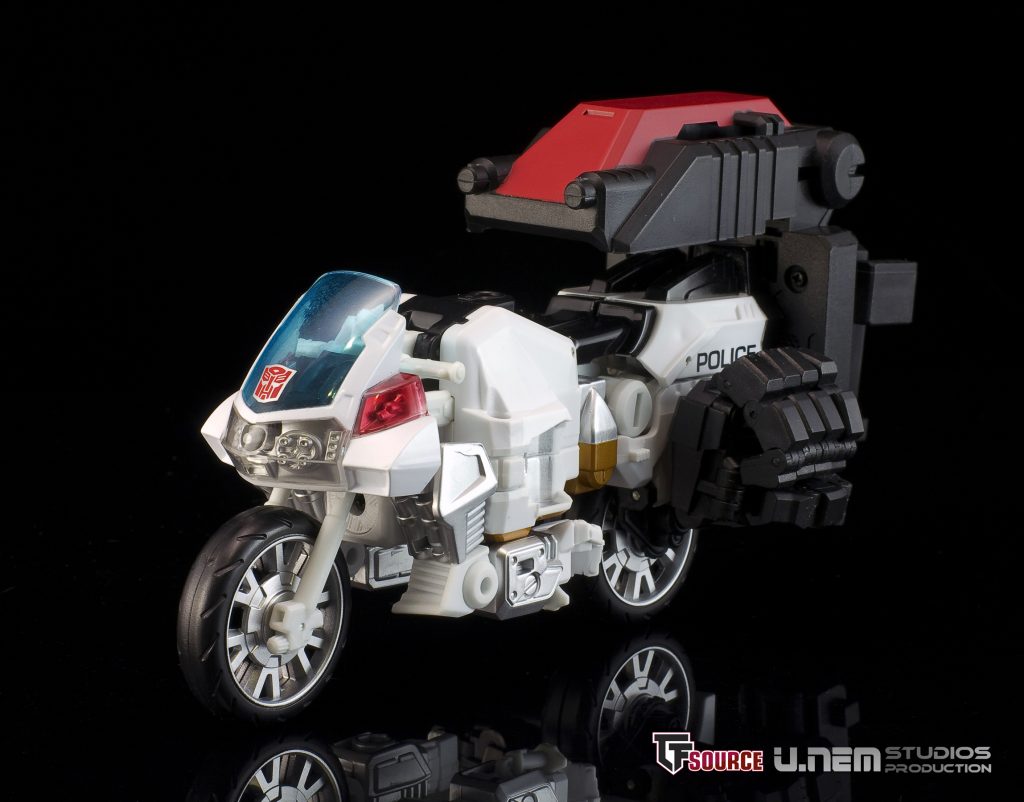 Once Hotspot is transformed into Defensor’s combiner torso mode, you will start to see the whole point of this upgrade kit. Even though the torso upgrade involves parts-forming (two parts to be exact – upper torso and hip plate), it is undeniable that the aesthetics have been greatly improved with these two essential parts. It would probably have taken some brilliant engineering to design the kit without parts-forming and still fit everything nicely into Hotspot’s alt mode…Installation of the torso and hip pieces are straight forward and holds together very securely. The kit makes use of the original Defensor head, which works, although an additional head (maybe bigger by a notch or two) to provide another option would have been a welcomed move. 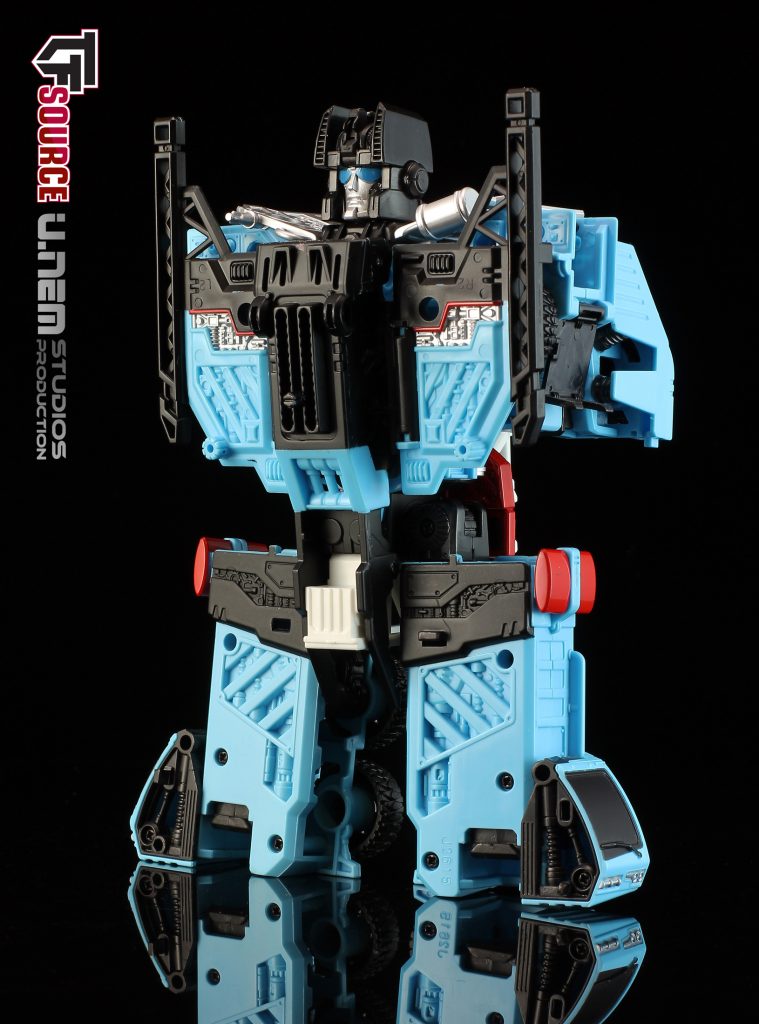 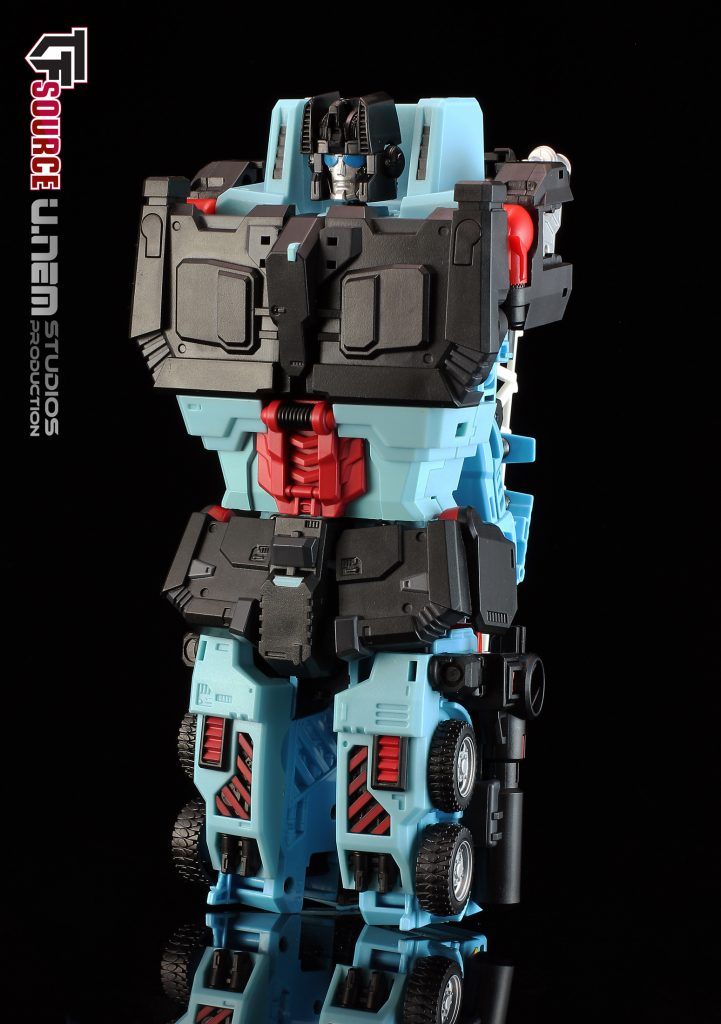 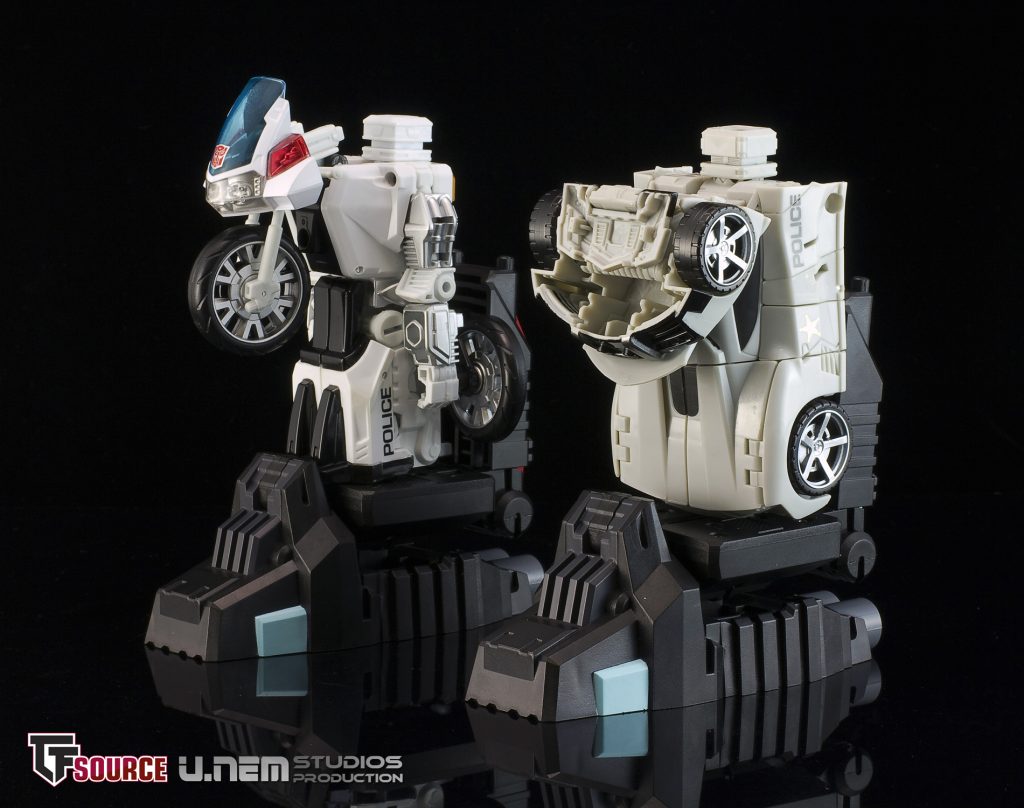 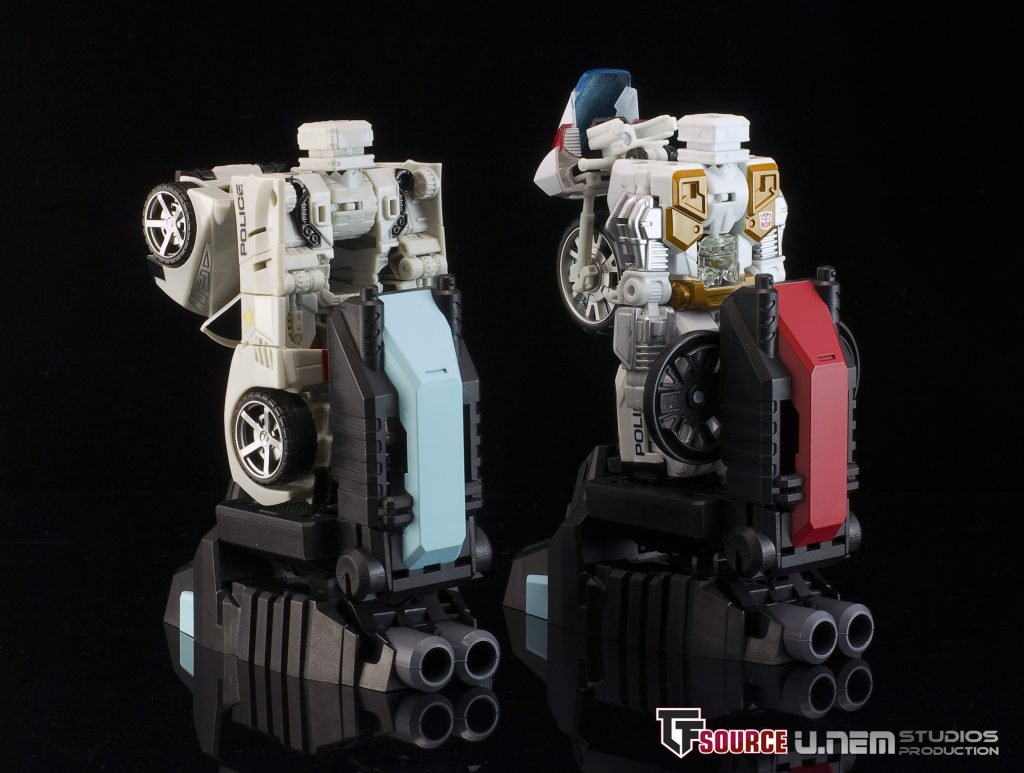 The method of combining the limbs to the torso remains unchanged, but the effect is simply astounding. 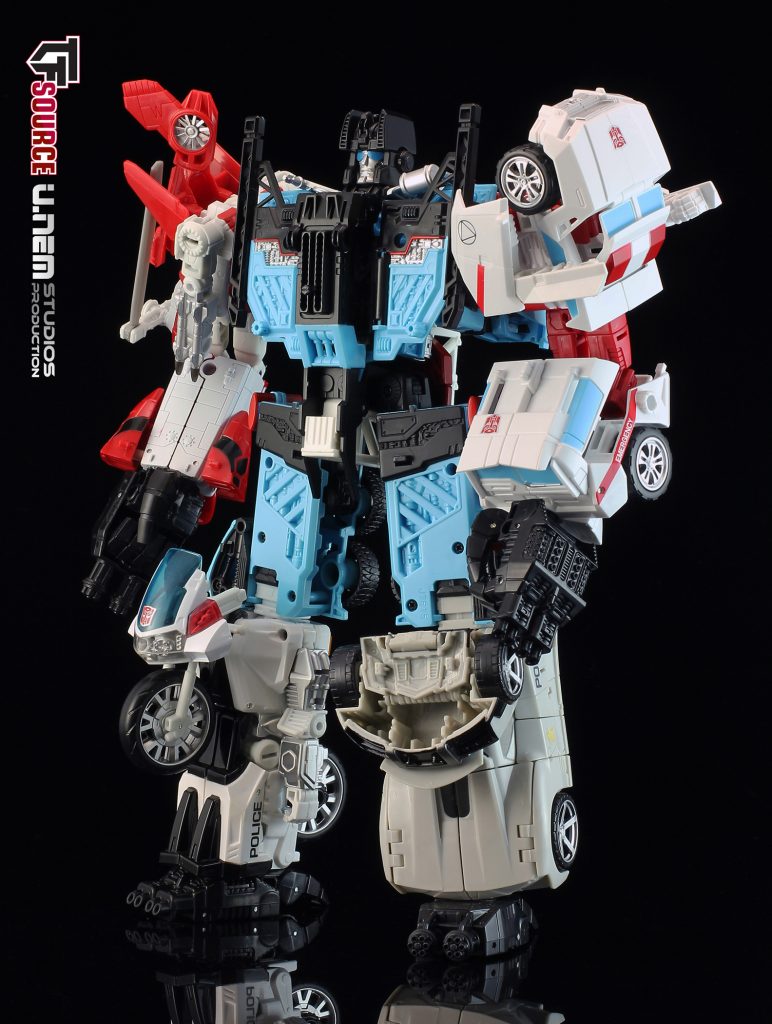 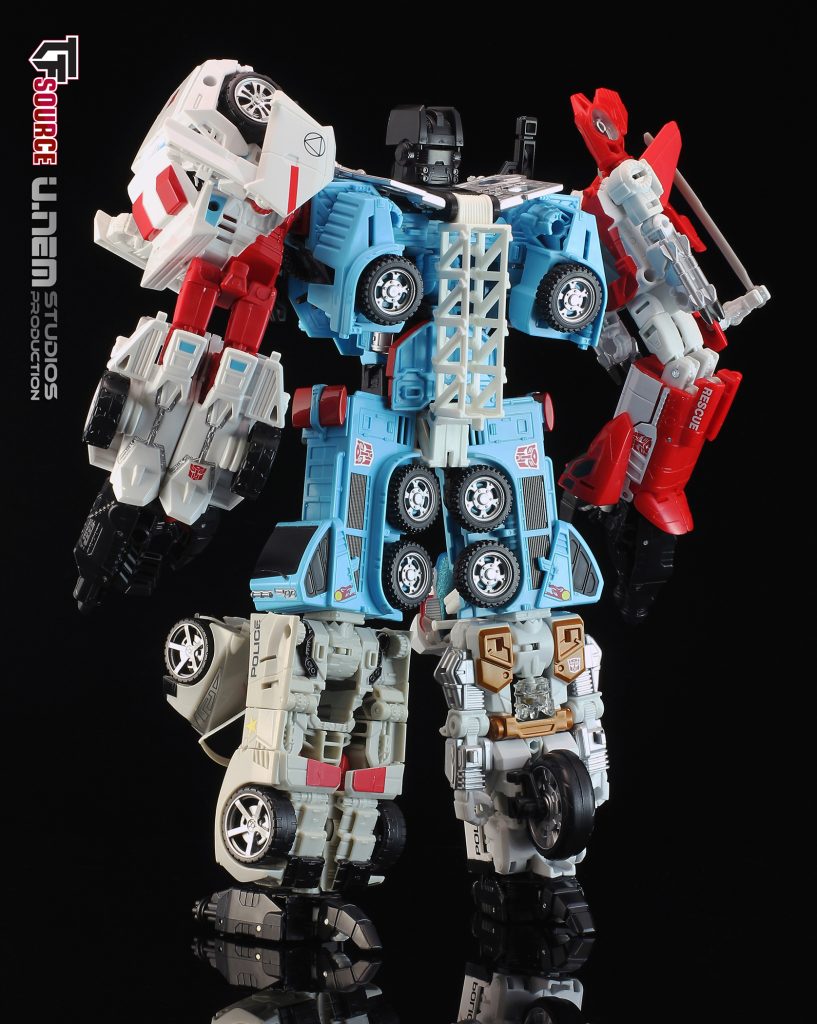 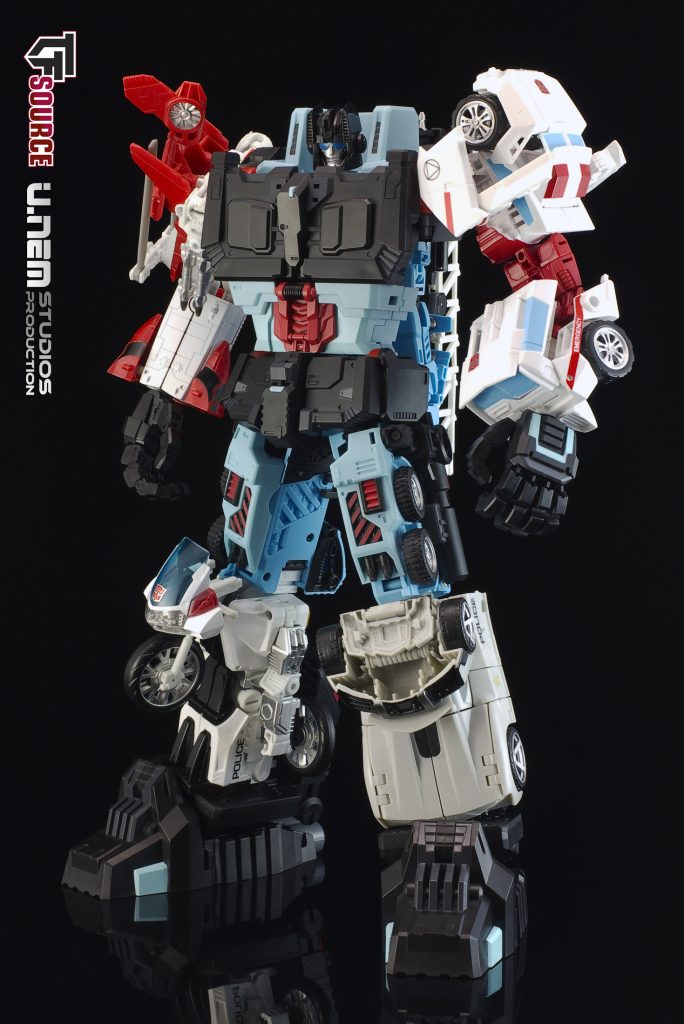 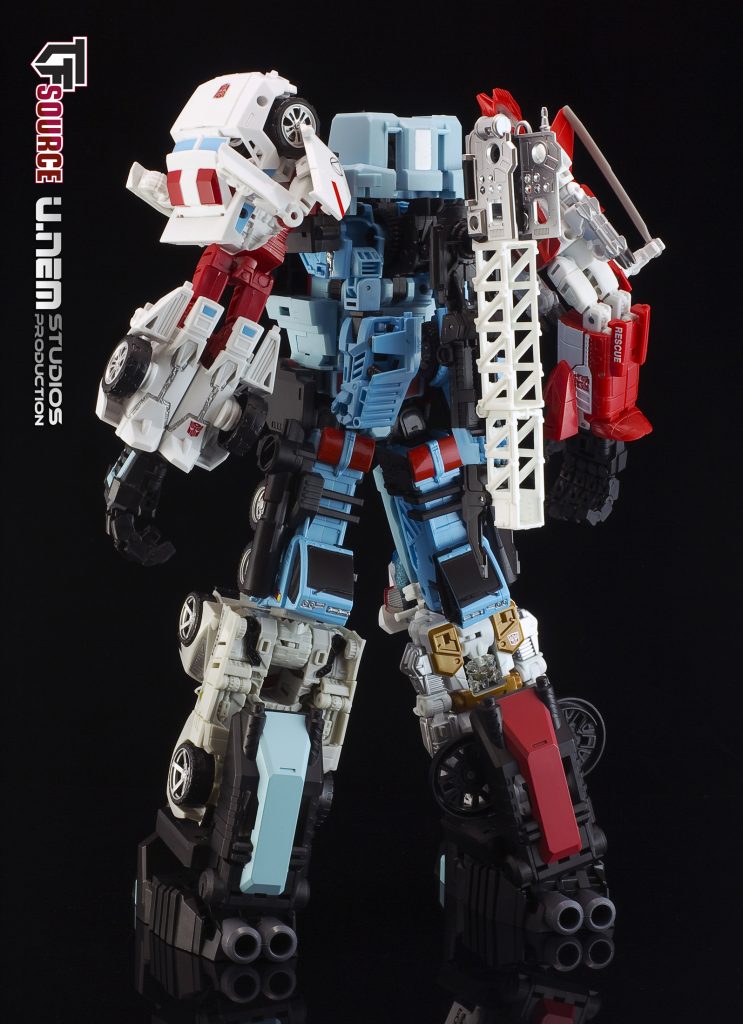 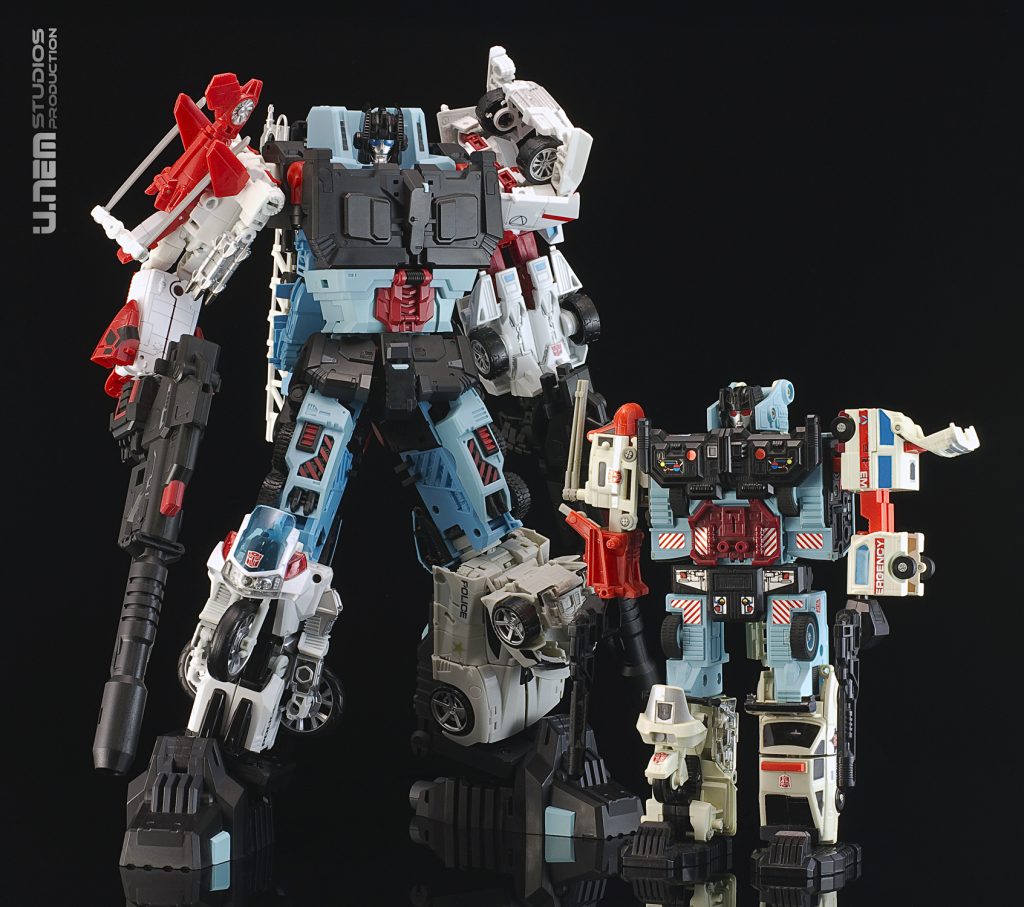 Unfortunately, the improved proportions also meant that the upgraded Defensor figure doesn’t quite fit in with the rest of the combiners in terms of scale. 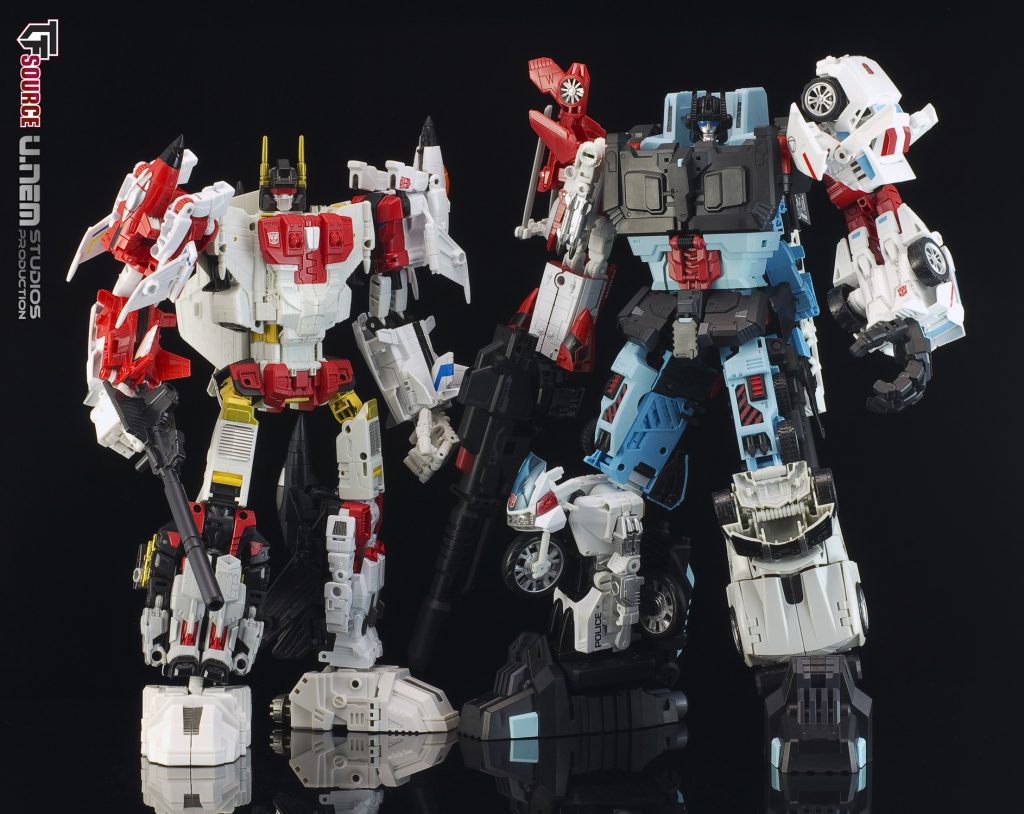 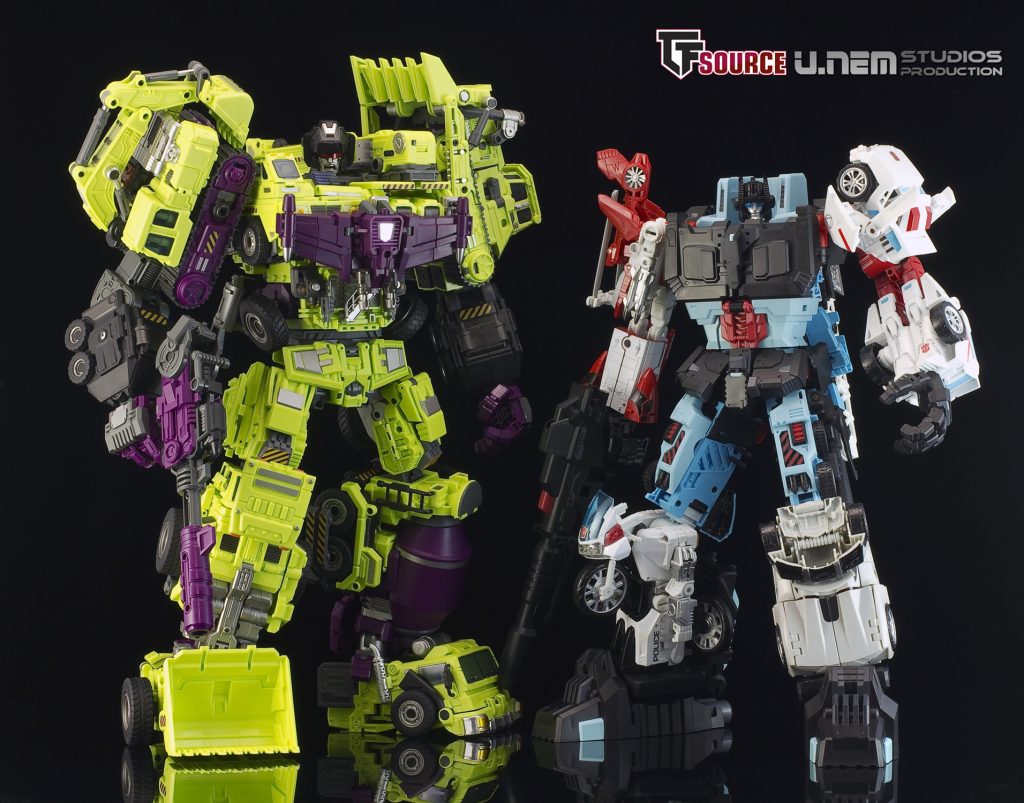 Articulation on the figure is improved with the addition of ankle tilts and individually articulated fingers. Joints are tight and well-built. It is a pity that the articulation of other joints is still pretty much the same as the original figure since none of these have been replaced.  However, the section where the arms peg into the torso can be rotated forward (inwards to the chest) to allow the arms better degrees of freedom. 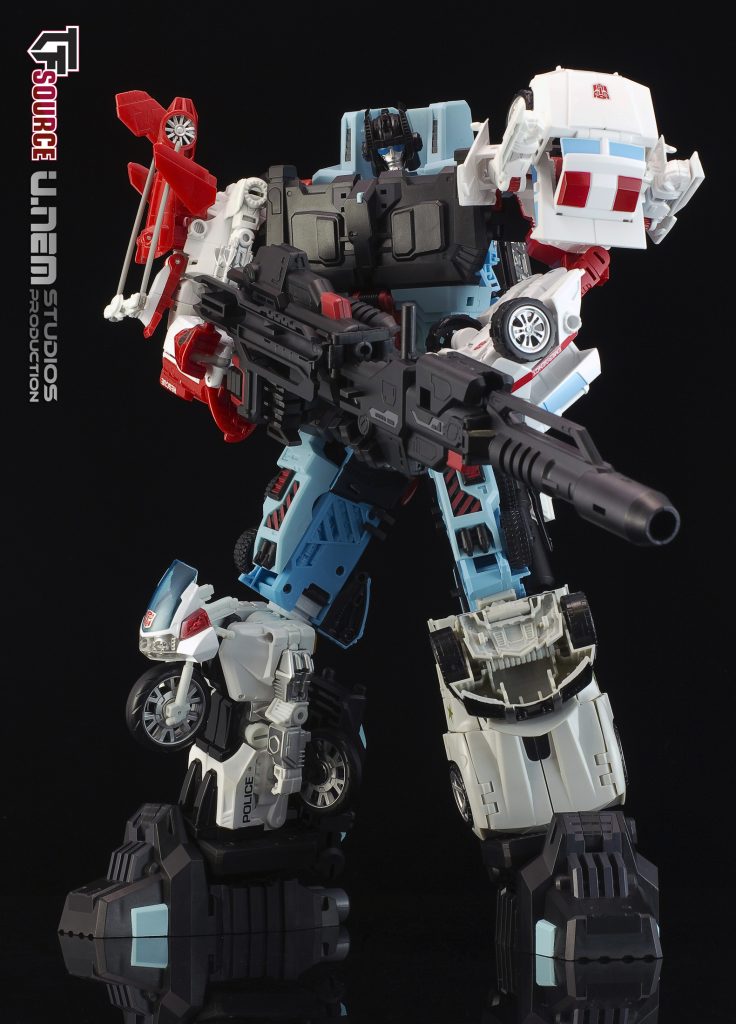 When inserting Defensor’s blasters into his hands, I discovered something which I did not notice before. The back portion of First Aid’s alt mode, which forms Defensor’s left forearm, actually gets in the way and prevents the blaster from being pegged into the hand. In order for Defensor to wield the blaster in his left hand, his forearm needs to be rotated around. This requires First Aid’s legs to be swapped around. Another issue is that the original elbow joints, formed by Blades and First Aid’s legs, are pretty loose and hence holding the blasters up becomes a challenge. Maybe replacement parts for these two figures would have made this set more complete. 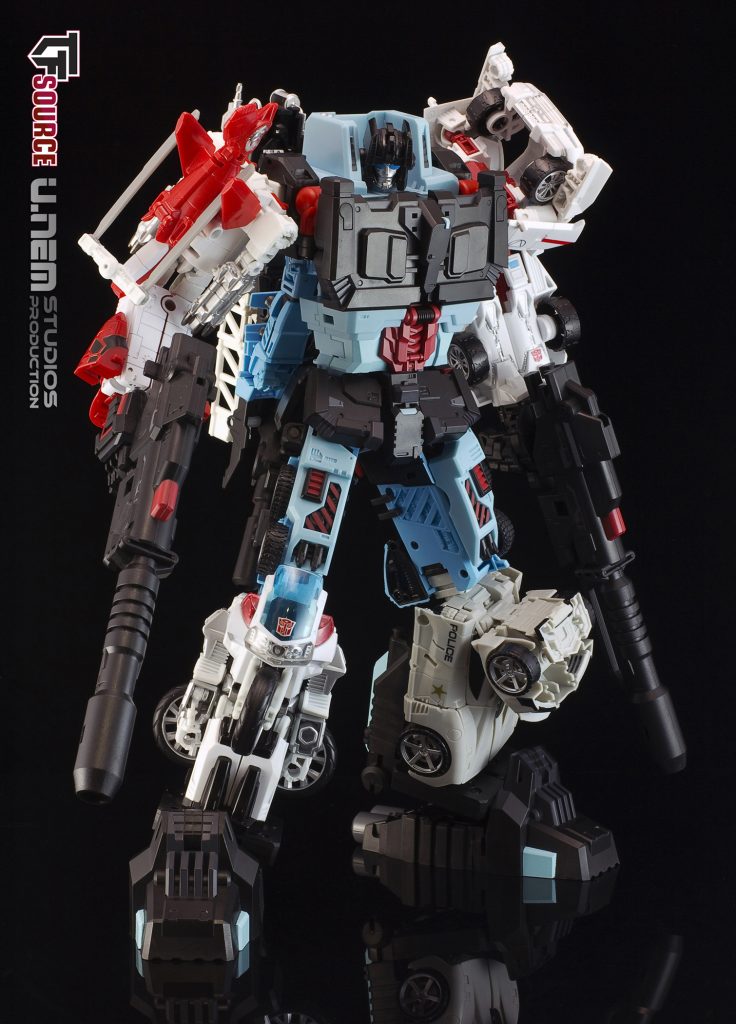 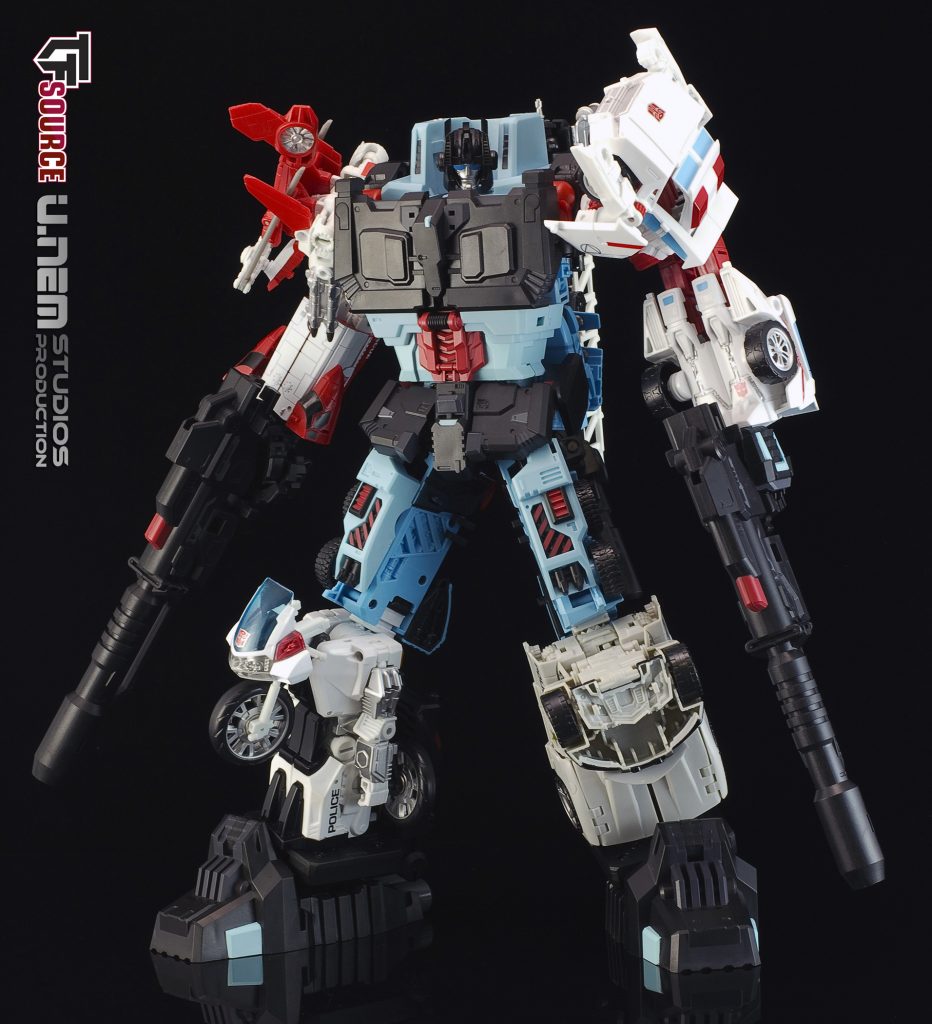 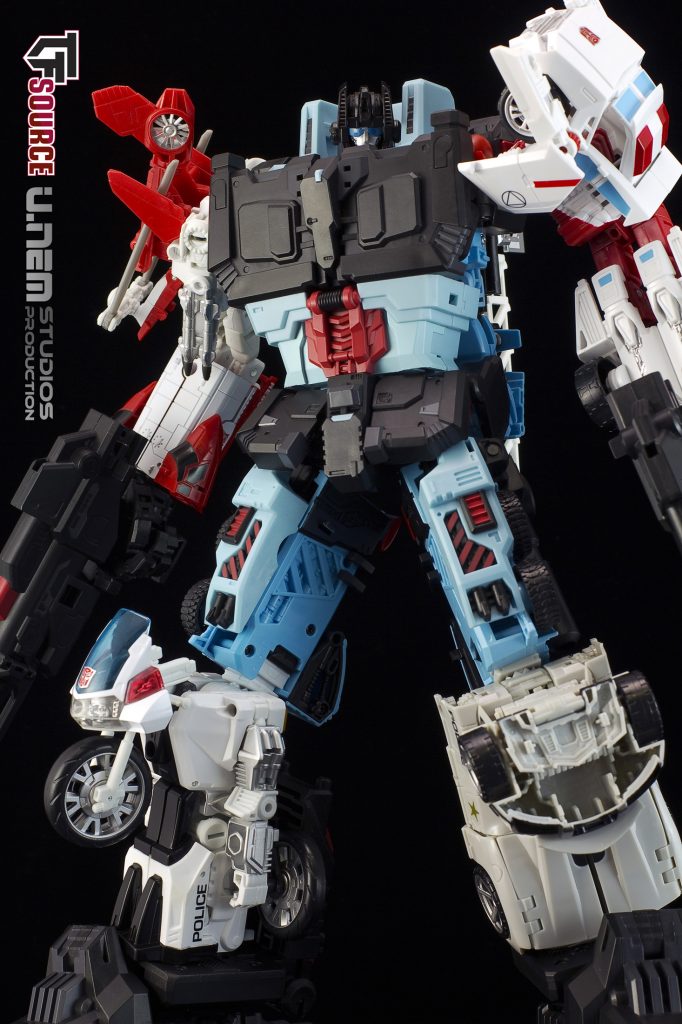 Because of the way the hip plate was designed, hinged and positioned, they do sometimes get in the way of moving the thighs upward. Balance of the figure is decent, although the inclusion of friction pads on the feet pads would be helpful in maintaining balance and poses. 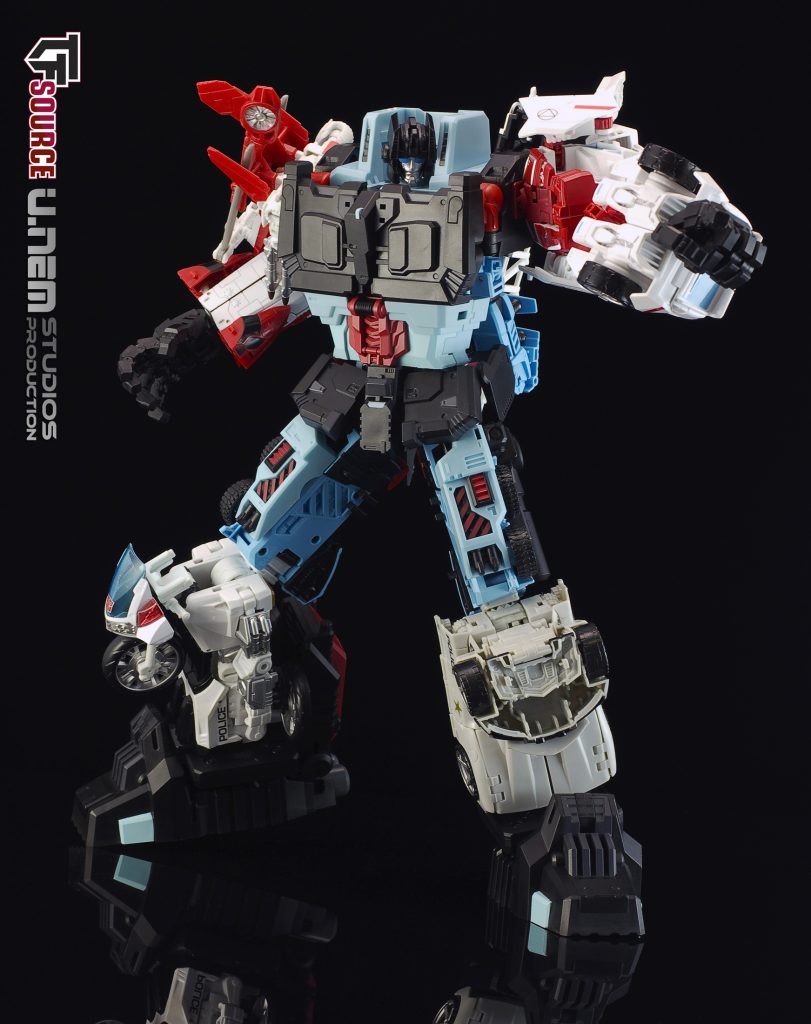 The two blasters can be combined into larger rifle. I managed to peg it into the ladder section behind Defensor although I’m pretty sure that is not the official place to store it. 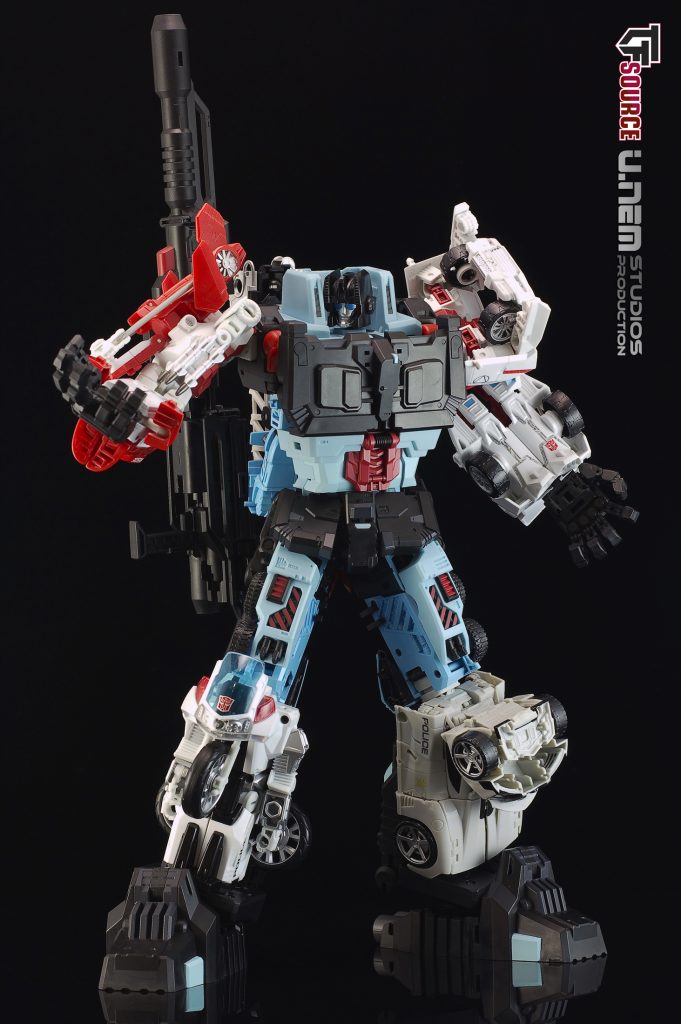 Although there were some “could have been better” moments, C+ Customs’ Defensor upgrade kit is a good first product for a 3rd Party company. I’m particularly impressed with the aesthetics improvement (although some may still beg to differ) and that alone is a good enough reason for me to get the kit. Even though articulation is not greatly enhanced, it is sufficient to allow it to cut an impressive figure when displayed. If you own either Combiner Wars or Unite Warriors Defensor, this kit is worth considering.