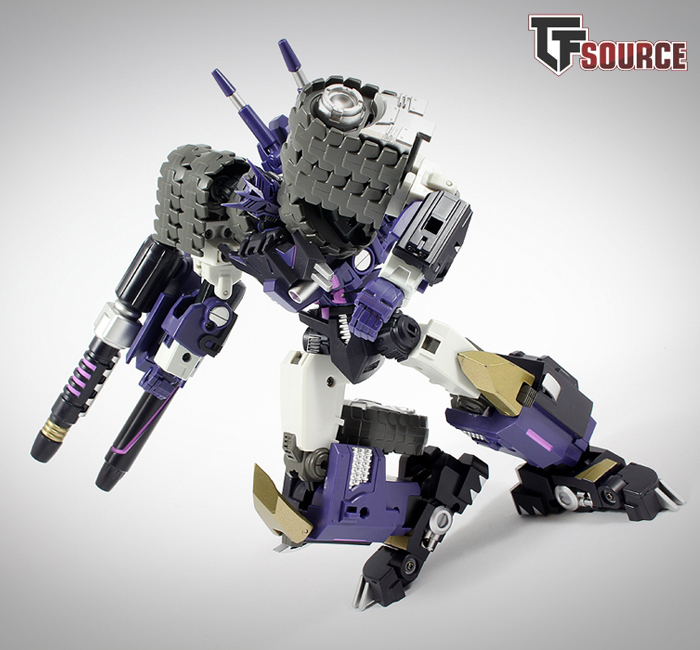 Get MMC R-19 Kultur at TFSource

The pre-Chinese New Year period is always choc full of 3rd Party releases. Mastermind Creations have already cranked out Ocular Max Terraegis, Reformatted Titanika and now R-19 Kultur. This figure is of course based entirely on the evil leader of a band of sadistic killers from IDW’s More Than Meets The Eye title, from the same subset as Cynicus and Anarchus. This is a hugely anticipated figure among MMC collectors and Transformers comic fans, and there’s very little chance of us getting him elsewhere, so the pressure was on for a quality release to do this landmark character justice. 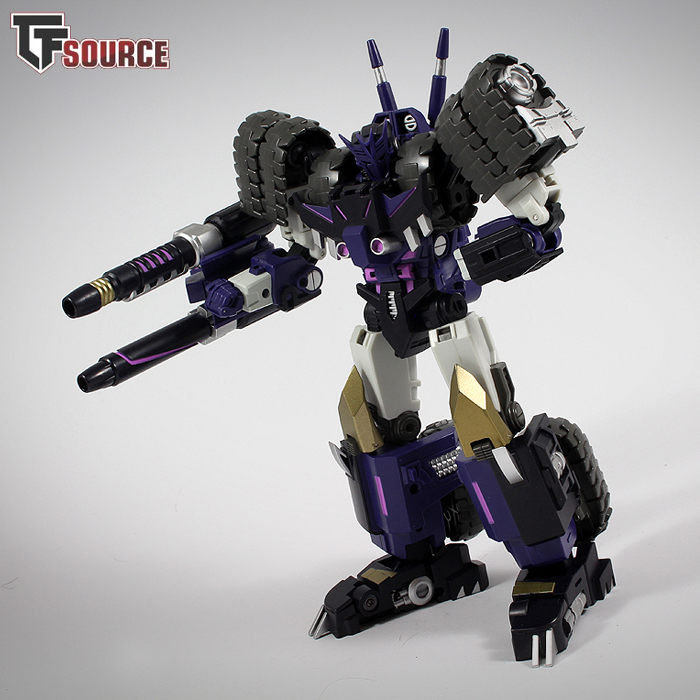 Having sold out of the first release, MMC have now offered up a Kultur reissue for pre-order, such has been the popularity – allied to what must have been a slightly smaller first production run. A very welcome trend is emerging with recent MMC Reformatted releases in that they are packaging the toys in alt mode, requiring the owner to reveal the robot. This is a great change from the first interaction with the toy being a highly focused study of the instructions to somehow compact and contort it down into whatever it’s meant to transform into. Easier, user friendly transformations are seemingly becoming part of the Reformatted landscape too, which is a relief. 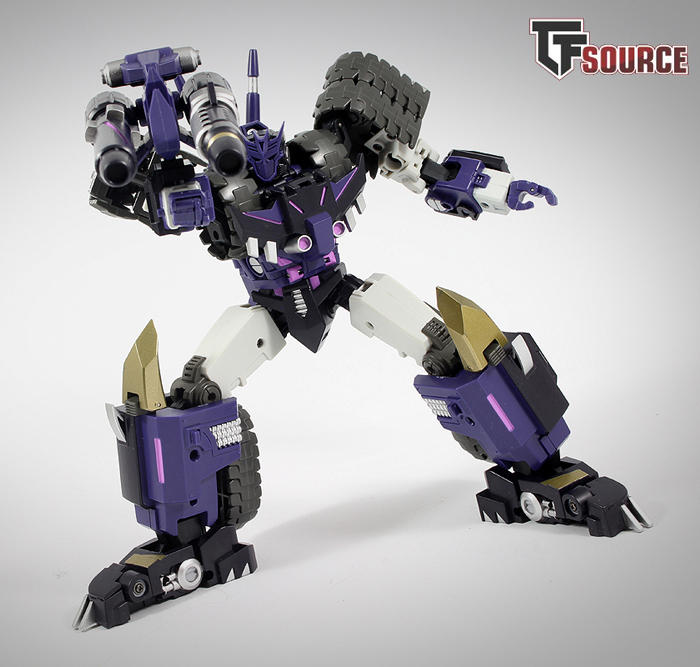 Kultur’s character is meant to be imposing, frightening and impressive. In terms of features, MMC have done him great justice. The colours are terrific and he even has the signature symbol mask that comes off, although it reveals the wrong identity underneath. This is a result of the working fandom theory at the time of design/conception guessing his true identity incorrectly, but it’s not as if the actual real identity eventually revealed contained a particularly recognisable or signature headsculpt anyway. Kultur feels solid and has the character’s double fusion cannon on the arm as well. I must admit to feeling that a character of this stature deserved a slightly heavier (shallow, I know) and larger toy, something more intimidating, a little closer to Carnifex and less like Titanika. 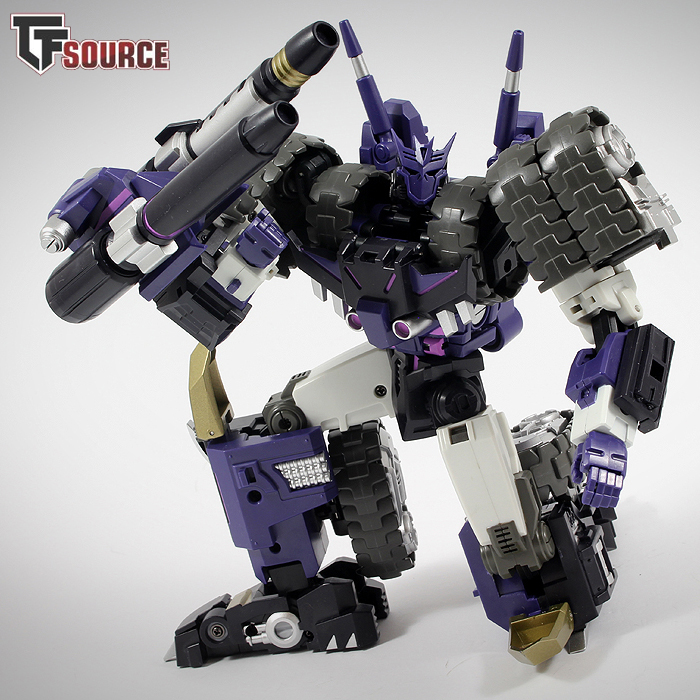 Posability is rarely a weakness for MMC Reformatted figures, and while Kultur can kneel and swivel and has a mean ab crunch, he comes with a couple of frustrations. When you have the fusion cannon is attached to the arm – so, always – his elbow bend means that the back of the cannons connect with the upper arms (tank treads) limiting posability and making handling him there a pain. You just have to remove the cannon, bend his elbow as desired, then re-attach and hope it’s all at an angle without too much obstruction so that attachment can occur. Then there are the shoulders which feel as though they will snap if pressured at the wrong angle. They are on a ball joint, but the ball is at the end of a stork and that’s where I feel the trouble may occur. While being a free-moving ball & socket joint, it is still limited by the cavernous-shape of the tank tread shoulder. There is a great ankle tilt, but not enough motion outwards to allow him to hold The Run pose well. Lots of movement in the neck, which is good and allows for expressive posing. 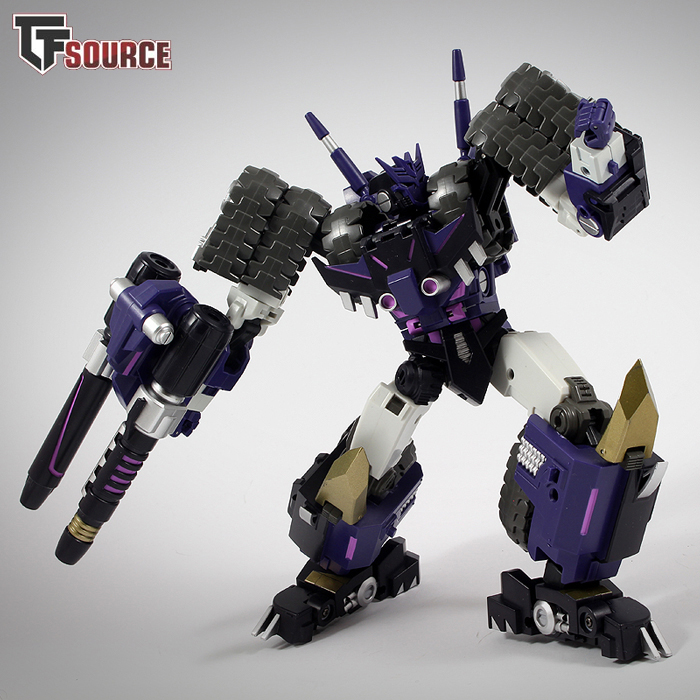 So he can be posed well and he is expressive, totally reminiscent of the source material, which for most people is going to be enough. Despite those obstructions and limitations in his arms, he does have good play value. I can’t help but think they’ve given him really small hands for a character and figure of this size & stature. You also have to watch those gold knees of his, because they can scratch very easily, already a couple of scuffs on mine. If you look at the two smaller tank cannons that stick up at an angle behind his head, you might notice that in some of my pictures they’re closer together, making a tighter ‘V’. That can be achieved by not swinging those parts outward from their tank-mode position as detailed in the instructions. They will sit further back from his head as a result, though. 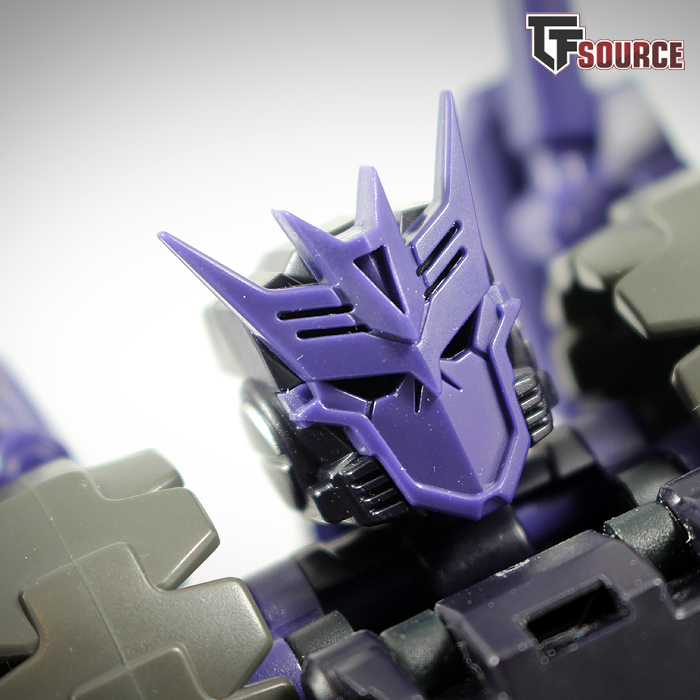 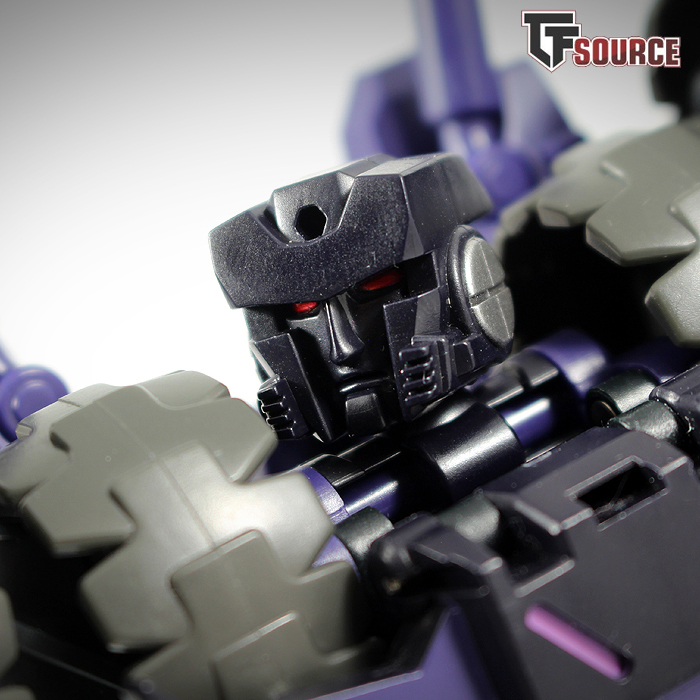 I think MMC have made the best of the headsculpt given the nature of it. They could never reproduce the exact licensed insignia for Kultur’s mask, so they went for something extremely close, much as MakeToys did with Pandinus’s tail. Underneath the easily-removable mask is the face of Roller, an understandable choice given how heavily a majority of the fandom believed that to be the real bot under the mask. I think it’s fair to say the eventual reveal took most of us by surprise. Nice sculpt, regardless. It should be noted that Kultur’s faces are missing the scars around the eye that were part of his comic appearances. 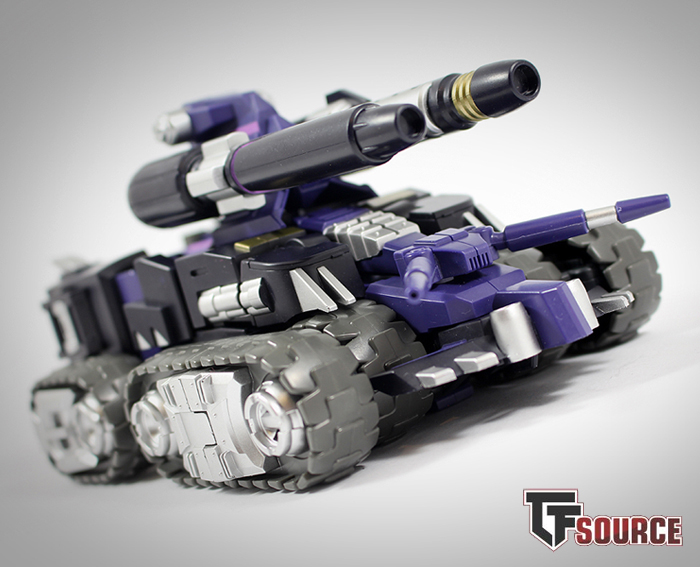 Kultur’s transformation is remarkably simple. We’re talking G1 simple, and that’s not necessarily a bad thing at all. Fans Hobby certainly subscribe to the simple transformation, and their toys have been a delight as a result. Titanika also had a straightforward conversion, but Kultur’s is even shorter and easier. The tank mode isn’t too bad, but I wish he either had rolling treads or small wheels underneath to help him roll. Unfortunately, they’ve gone the Spartan/Commotus route here and made it a very static vehicle mode. 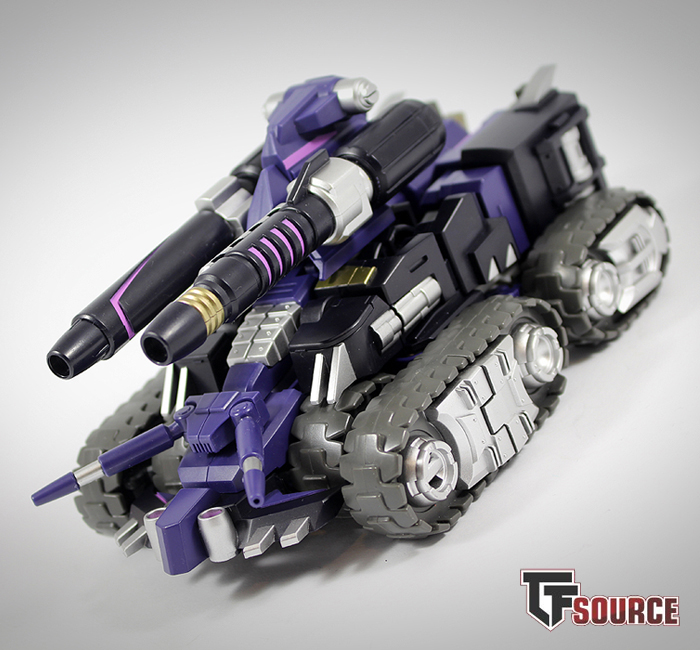 The colours still work beautifully in this mode, and the turret does rotate. A transformation this simple does increase playability as well as one’s willingness to pick a figure up to engage with, these are all positives. I almost hate myself for saying it, but maybe its simplicity actually counts against it, because I wouldn’t exactly call the steps fun. They just…are. I am, however, very happy that everything tabs where it is supposed to go and that tolerances are good. It means that as long as paint, QC and joints hold up, there’s no limit to how much you can enjoy him if it is completely your cup of tea. 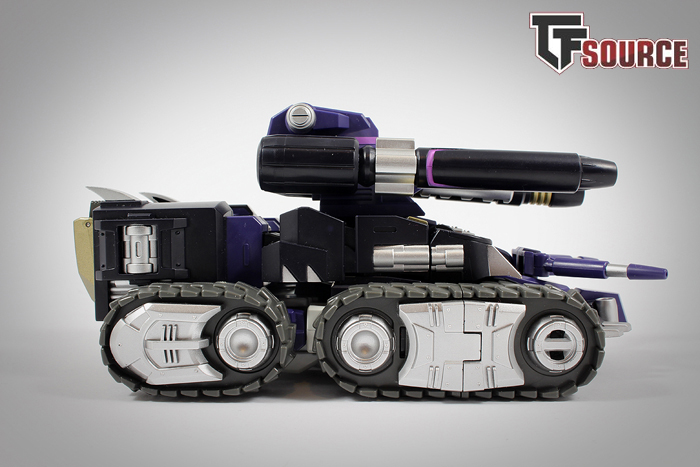 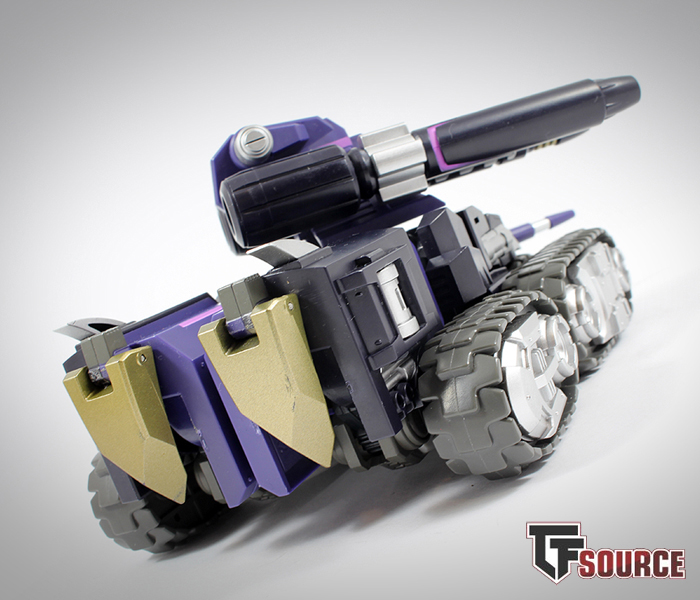 While Kultur looks amazing from the front in tank mode, his side profile and the view from the back are a little drab. You can also see the scuff marks on the gold knee pads in the last shot above. I was just thinking, though, since Kultur’s character in the comics is addicted to transforming and the nabbing of transformation cogs off his victims, maybe it is entirely appropriate for him to have such a quick and simple conversion! 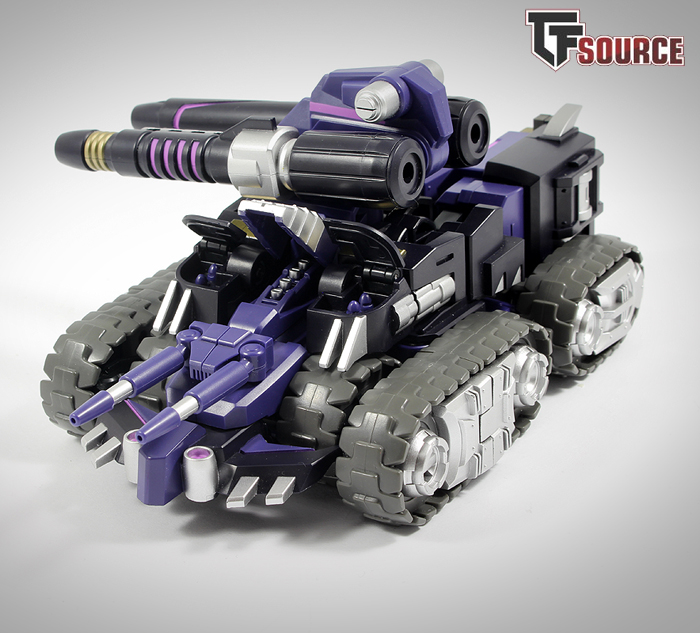 One other feature that Kultur has in tank mode is the opening of three hatches to reveal weaponry. You can see all three hatches open on the front of the tank above, just between the two sets of cannons. Speaking of the main double fusion cannon, I’m so glad they stayed as accurate as possible there and made each barrel of the fusion cannon unique as per the comic concept. Overall, Kultur’s tank mode is pretty accurate, the exception being that the rear treads in the comic are drawn as sitting higher (i.e. being noticeably larger) than the front set of treads. 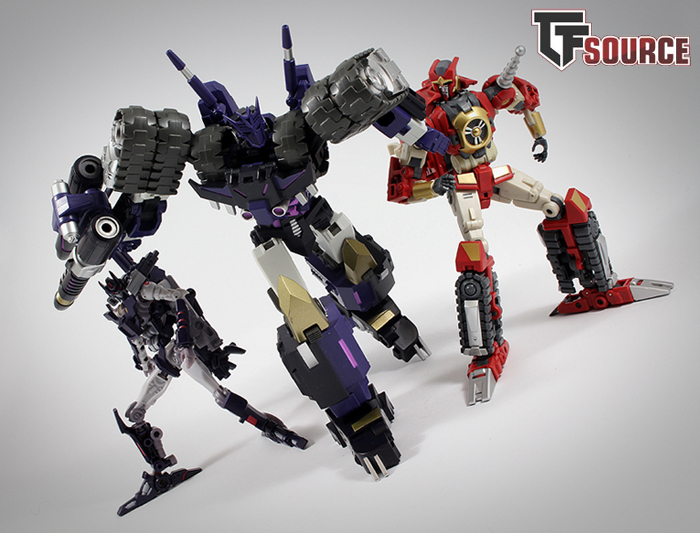 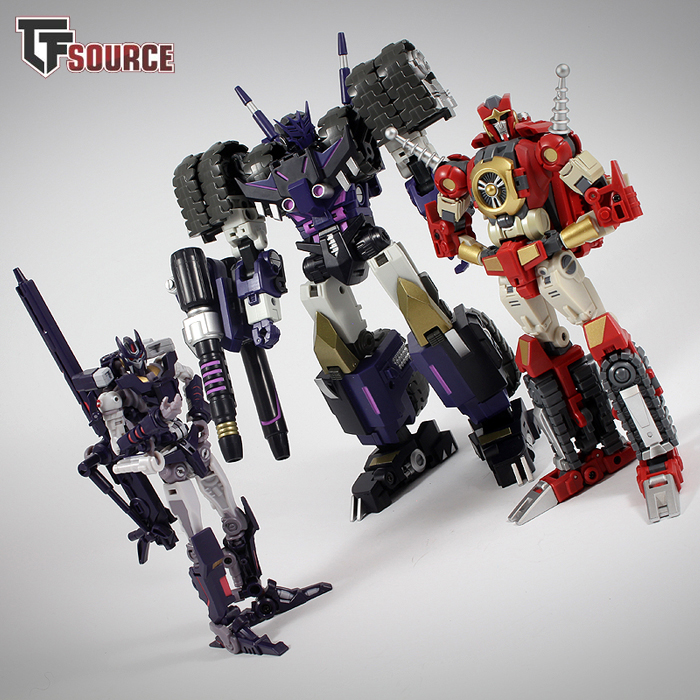 I may have wanted Kultur to be a standout a figure on his own like Titanika, but I can let him off his shortcomings because the real endgame here is the complete justice division lineup. MMC continue to help collectors fill out the MTMTE ranks where Hasbro and Takara seemingly have no interest in going. Cynicus, Anarchus and now Kultur really pull it together for the group shots, and this is where the ownership of Kultur makes the most sense to me. As much as the above tickles me, I think I’m even more excited by how he looks with the Warriors Elite as described in the pages of IDW’s finest: 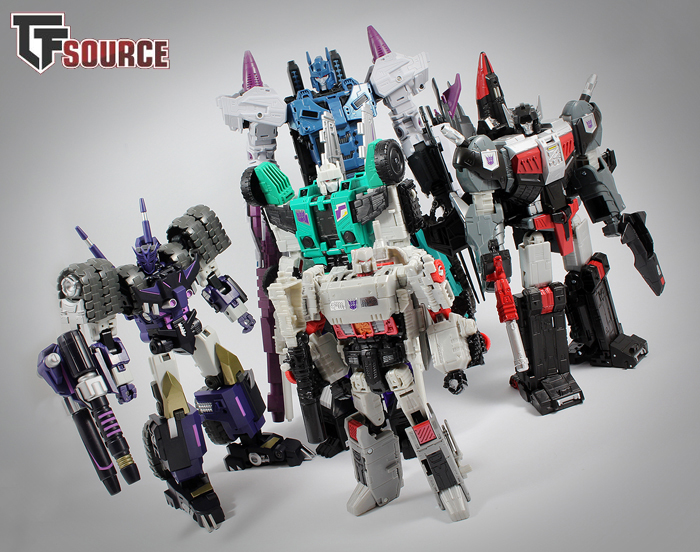 I was pretty much leaning towards moving Kultur on based on where my collection is heading these days, but placing him with Carnifex, Titans Return Megatron, Sixshot and Sky Shadow really made me reconsider. Again, if you consider that Terminus Hexatron is much closer in size to Carnifex than the current TR Sixshot, Kultur’s smaller size rears its head once more. I guess it was more important to scale him with Cynicus and Anarchus than the very first Reformatted release from 4 years ago, or the towering Carnifex who had his own lineups to look good in besides an MTMTE one. 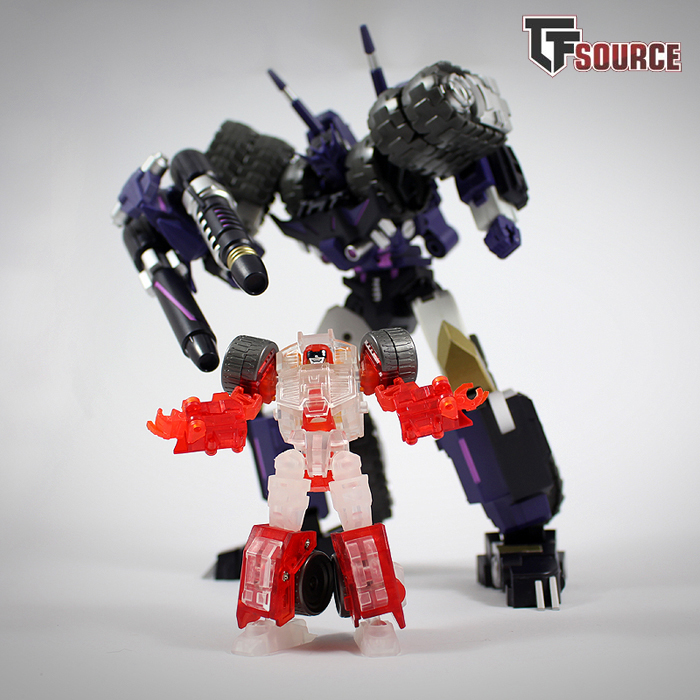 When you look at Reformatted R-19 Kultur as a whole, I guess you’ve got to call it a success. It completely captures the aesthetic of the original character and will more than adequately plug that gap in the collection. The simple transformation ensures play value and repeated return to the figure, as well as showing other companies out there that it can be simple. It’s been one of HasTak’s best weapons, 3rd Parties have been remiss in ignoring the appeal of a simple conversion for years. Kultur is expressive and posable, and very importantly, he looks superb with Cynicus and Anarchus. I guess what stops him being an amazing figure, in my eyes, is that he’s a very strong case of what you see is what you get. There’s nothing to discover, not much beneath the surface, unless you count the disappointment of the obstructed movement in his cannon arm. The breadth of his appeal to me was established within minutes of handling the figure, and that’s not changed since I got him. This is not a massive problem, I’ve loved other figures that didn’t keep surprising me over time, I just wish Kultur was a bit bigger, heavier and more terrifying. One more thing, MMC really need to get these figures out quicker, preferably before Roberts has erased them from the ongoing story! 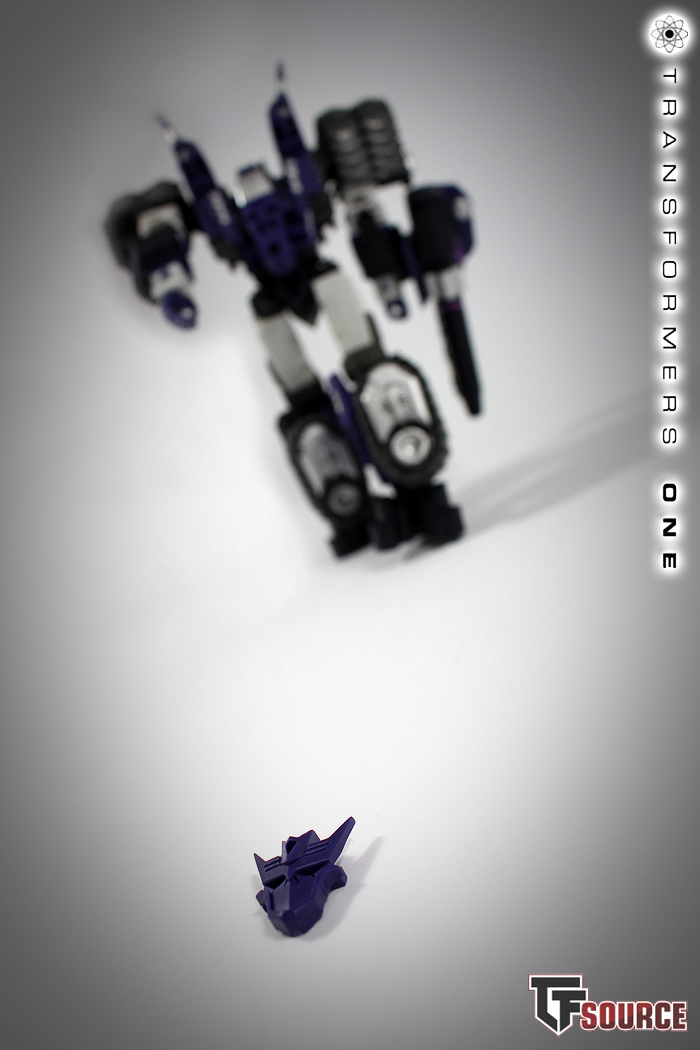