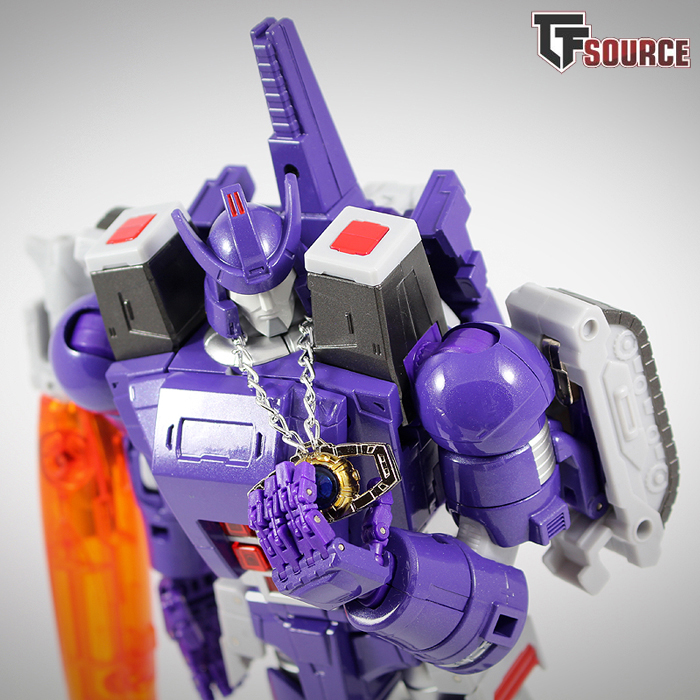 When FansToys get something right, they really get it right. Quakewave, Stomp, Scoria…these were all exceptionally good products, but items like Spotter, Willis, Lupus and the Insects all left a slightly more bitter taste in my mouth as they could have been that bit more polished, squeaky clean QC-wise and just generally more user-friendly. Stomp was the last figure I felt they had comprehensively nailed, and it appeared at the top of enough end-of-year lists just to drive the recognition of that success home. One year on, FansToys have put out FT-16 Sovereign, their take on a Masterpiece-style new evil leader from the 1986 Transformers animated feature. So have they scaled the same heights? 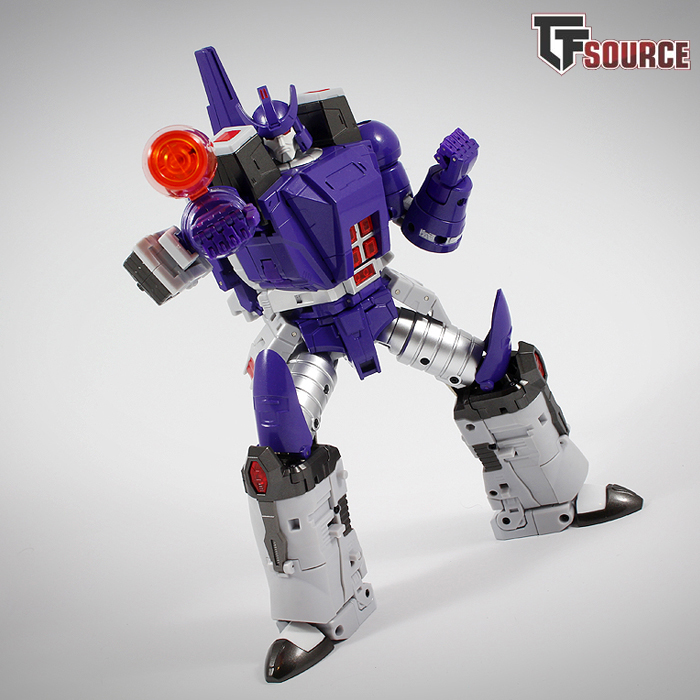 Sovereign comes in a huge box, not unlike that of the Iron Dibots. Styrofoam layers separate the figure and its accessories from the Soar-like clear display stand. Sovereign features a matrix on a chain, a translucent and solid orange arm cannon, a purple plastic Christmas tree/weapon blast effect, a replacement shouty face and an extra face for FansToys FT-09 Tesla. The instructions are also….not…too…bad. This time. Taking this figure out of its packaging, you will be struck by its weight and painted finish, so 2017 has yet another guaranteed ‘Wow’ bot, and it’s only February. 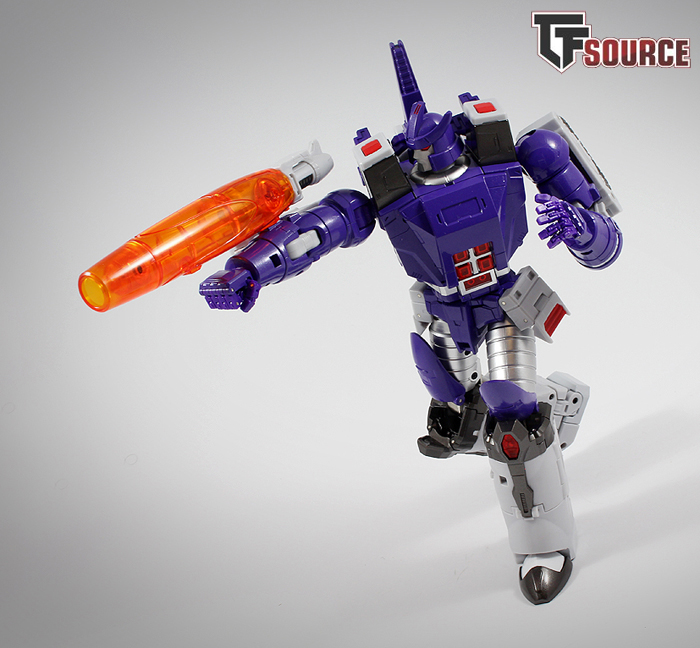 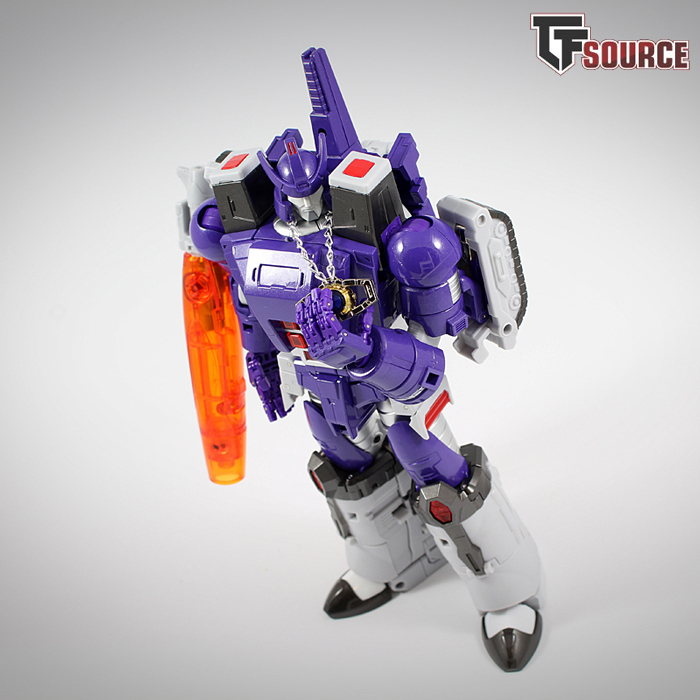 Sovereign looks magical in robot mode. I was left in sheer open-mouthed awe at how comprehensively they nailed the character likeness of the original inspiration from the on-screen media. It seemed that every single detail or proportion that DX-9, Unique Toys or Hasbro/TakaraTomy had not gotten quite right with recent attempts at this character, FansToys had aced. I still feel that way, two weeks after receipt of Sovereign. He’s devastatingly beautiful and every time I look at that sublime headsculpt – possibly the best and most accurate any 3rd Party has ever managed – I hear Leonard Nimoy. Sovereign is GORGEOUS, the embodiment of reborn and maniacal evil, and when a toy is so perfectly made to reproduce the animation aesthetic while not sacrificing detail, it actually allows me to roll back years of not-quite-good-enough toy influence, separate it from the character and realise how much I actually love a particular character. MakeToys Cupola performed the same miracle on me last year. 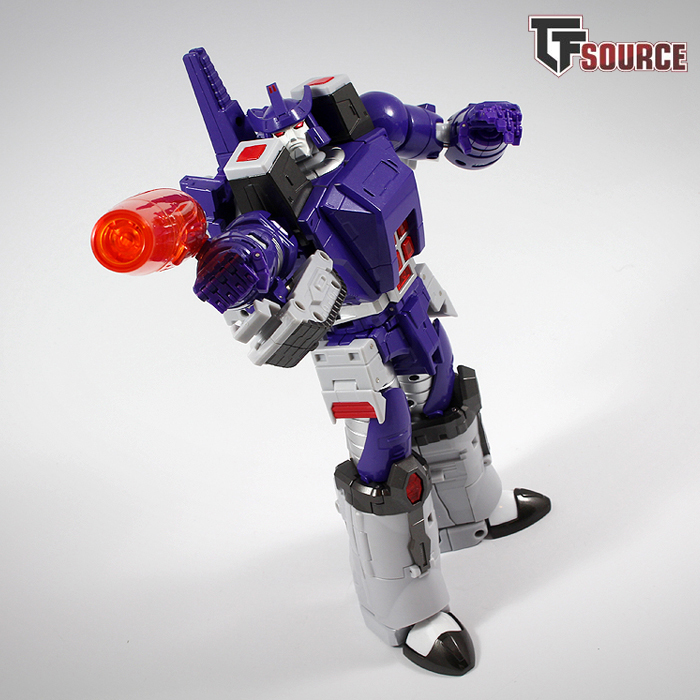 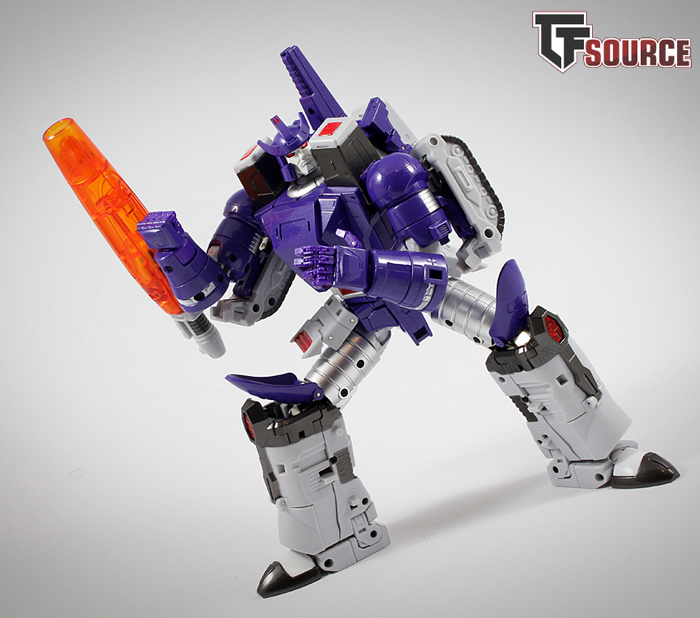 I should mention that when I lifted Sovereign out of the box, the screw cover that should stay in place behind one of the shoulders was loose in the styro. To this day that piece loves to fall off upon handling of the figure. The joints pretty much everywhere are superb, from the double-jointed elbows to the ratcheted shoulders, knees, thighs and waist. Hands are super-articulated and although the ankles only allow a tilt in one direction, they can support his weight for The Run. Look at those piercing red eyes and that dreamy translucent orange toy-accurate cannon colour. Look at the slightly disgusted, still-in-control-of-his-sanity and highly handsome face of his and the perfect proportions of that helmet. Look at those silver thighs and the neatness of the silhouette from every angle.

Look at him pose… 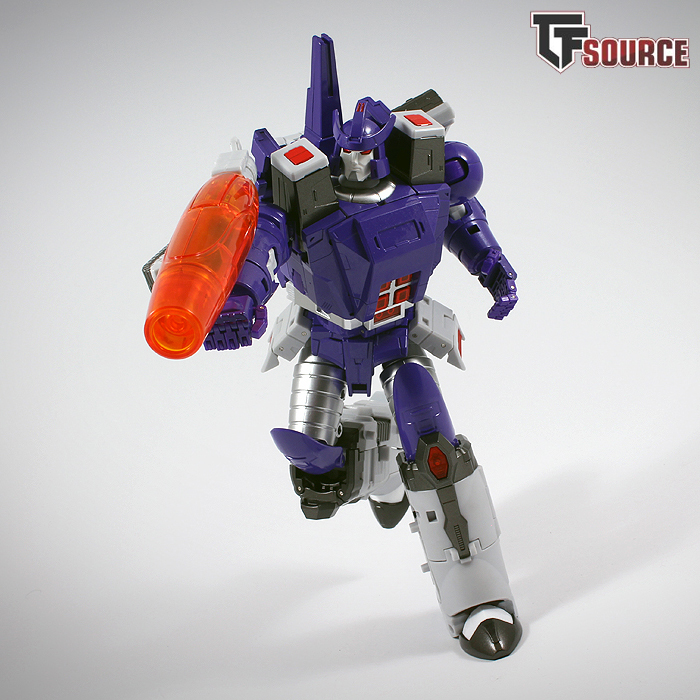 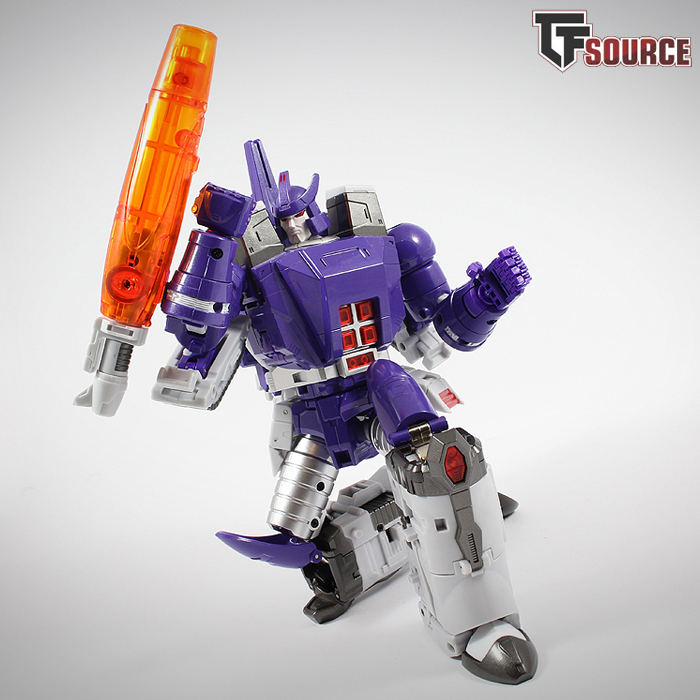 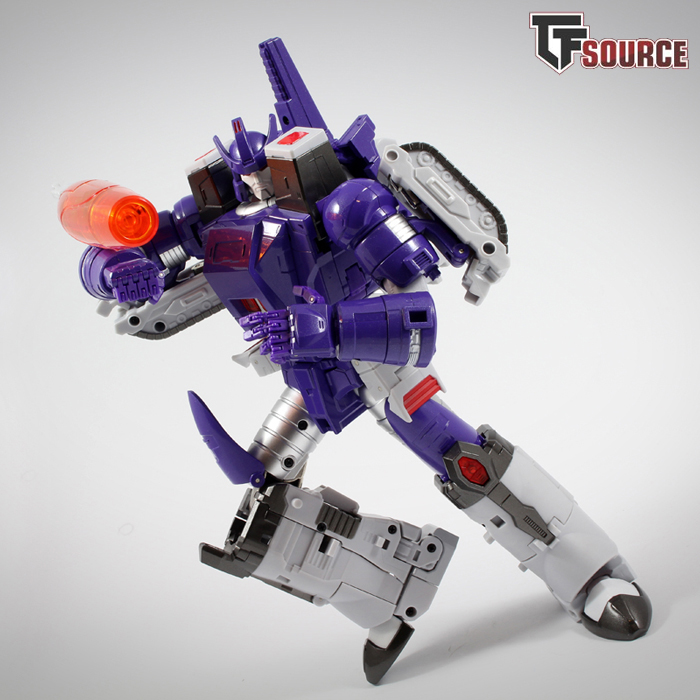 Beyond beauty, beyond posability, he has strength and balance. He has presence and an intimidating air about him. I’m so grateful that Sovereign is scaled to match MP-9 Rodimus Convoy, because this is my desired scale for Masterpiece-type figures, especially post-1986. As you can imagine, he looks fantastic with the MakeToys Re:Master Headmaster range and FT-18 Lupus too. If you own the X-Transbots figures Andras and Eligos, and you’re happy with them, adding Sovereign to the mix will bring you a lot of joy. 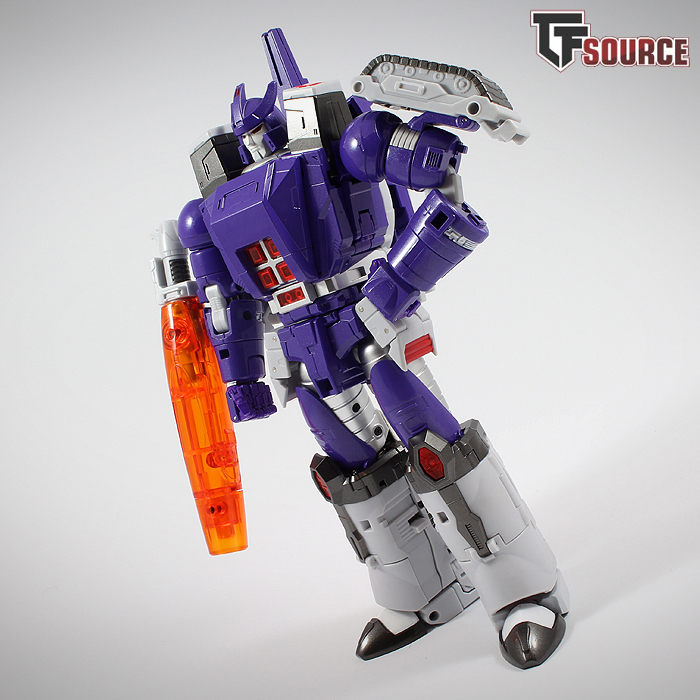 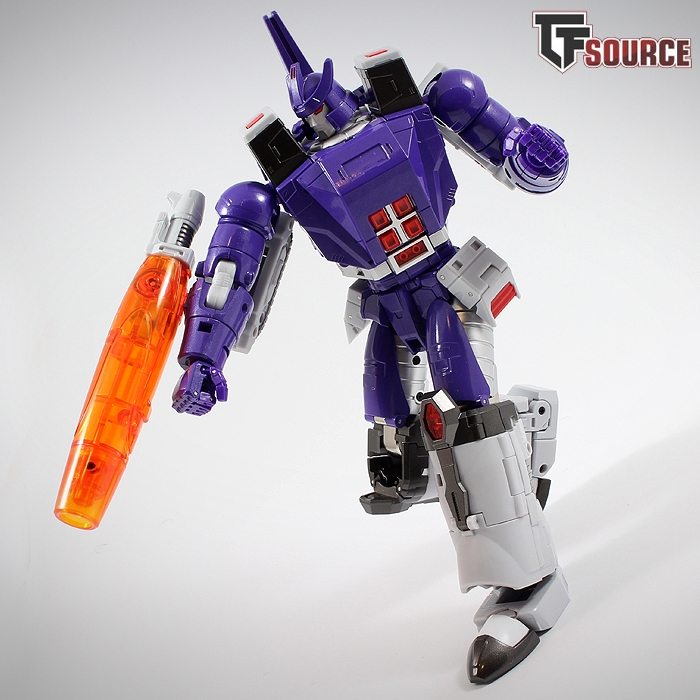 There’s absolutely no lack of character and expression in Sovereign’s make-up as you can see. It doesn’t seem as empty as some of the slavish on-screen reproduction attempts that some 3rd party figures suffer from. My biggest gripe with Sovereign is that the gorgeous cannon will not stay attached to his arm via the large tab. Not only does it fall off, but the flaps along the top and bottom of the cannon will not stay shut and that in turn leads to it coming off as well. It’s the same for the solid cannon, so I am concerned that eventually they will hit the hard floors of my home from enough of a height to suffer actual terminal damage. Visually, the above picture demonstrates what might represent the  biggest issue I don’t even really have with him, the large physical disconnect between the feet and the shins at the ankle when Sovereign leans back. 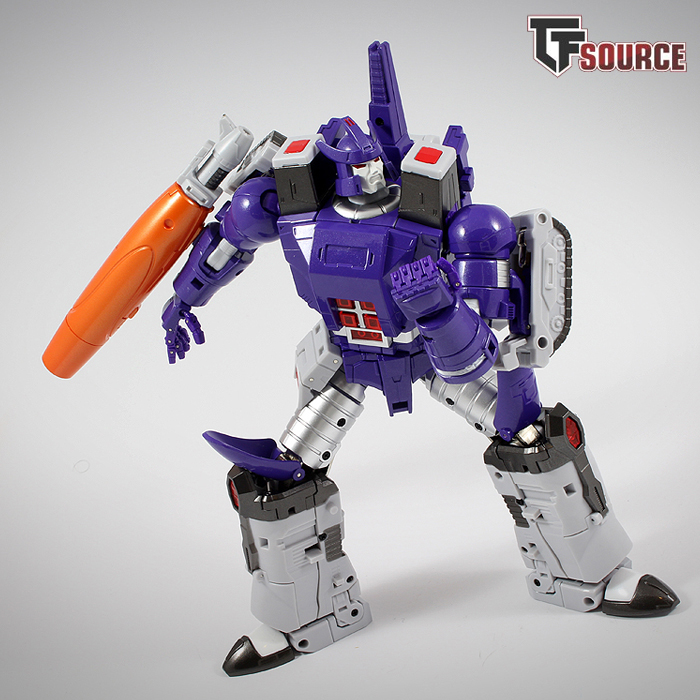 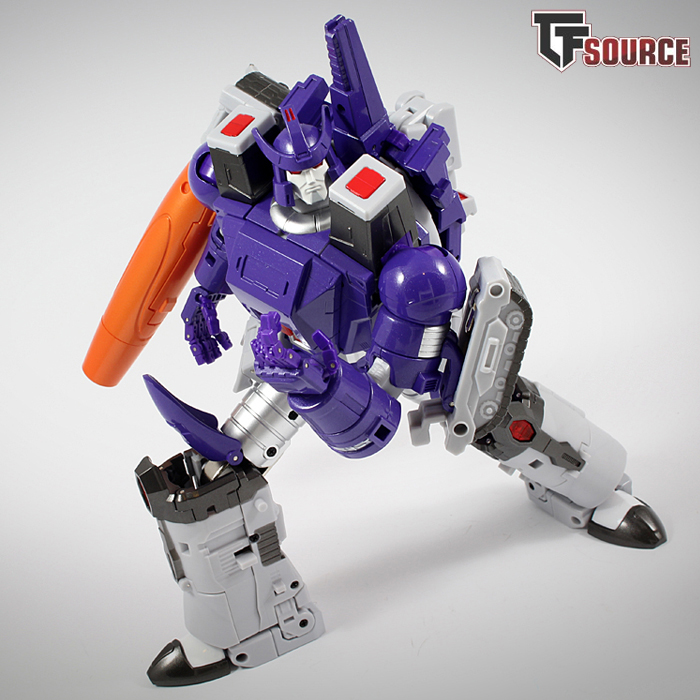 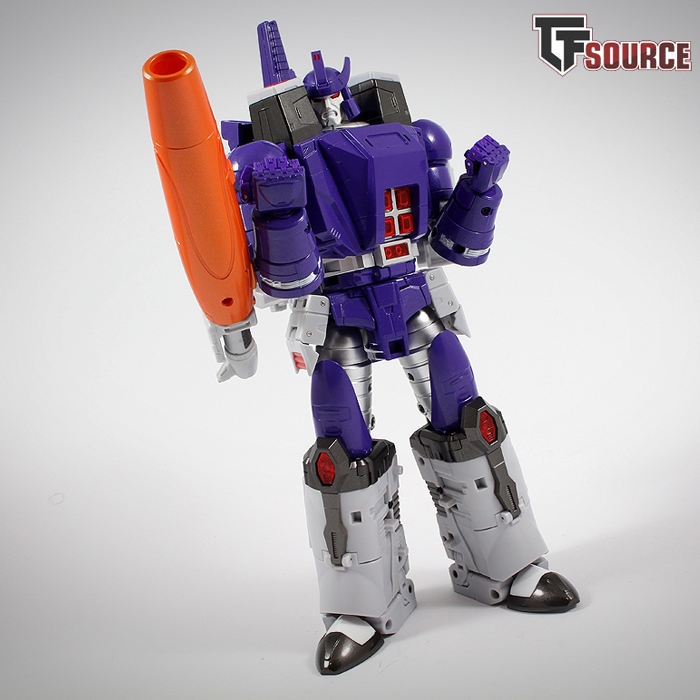 Here you can see Sovereign with the solid orange cannon that is more show accurate, and also the angrier face accessory. Both are more than passable to me, and I’m usually not a fan of the extra faces toys come with these days, and I usually lean towards toy accurate accessories (as opposed to overall aesthetic). The solid orange cannon has slightly more secure flaps than the translucent one, but it does fall off just as regularly. 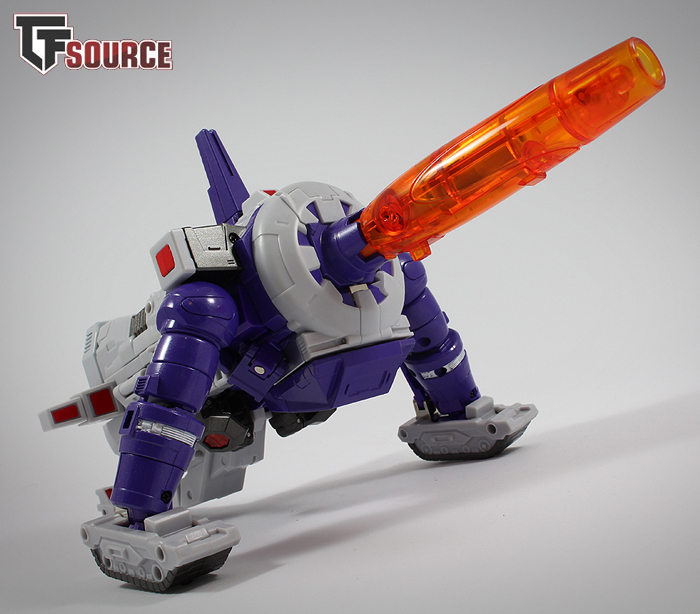 Having received my Sovereign later than most reviewers and even many customers, I had already heard tales of an unsatisfactory alt mode and a dreadful transformation, and while I could happily believe that both of these assessments were true based on prior experience, neither of them are for me. I delayed transforming Sovereign for a number of days, just to stretch out that honeymoon period and the adoration of the robot mode, before the transformation infused the whole experience with frustration. 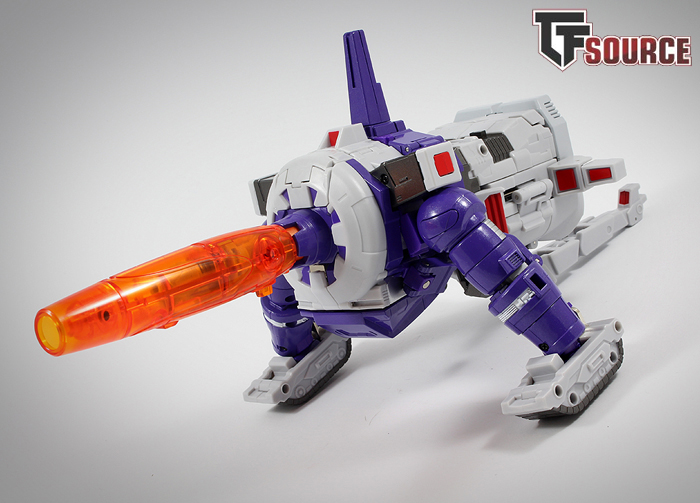 At the start of every expensive 3rd party figure’s first transformation, I sit there with the instructions, filled with hope and looking forward to the challenge ahead. A bit like a Lego build, just follow the steps and you’ll get there, maybe even enjoy it. With virtually every 3P product – barring the recent Fans Hobby figures – I get frustrated, bewildered, lost or just plain misled somewhere along the way. You just figure it out eventually. Sovereign was great, I did everything it asked and I was able to get to the alt mode with no frustration regarding what I had to do, or an impossible step. And you know what? I love Sovereign’s cannon mode. 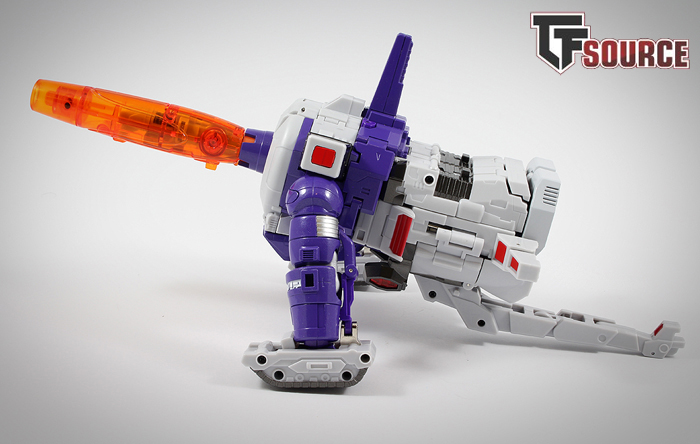 It is not without its difficulties and concerns, though. Disconnecting and connecting the shoulders is very frightening and tight, as is sliding them down. Getting the base of the laser cannon out the first time was bloody hard too, as well as doing the right things in order and together in order to rotate the robot head into the chest. Having gone through the transformation multiple times, I can honestly say – and folks will disagree – it’s juuuust on the right side of complex and challenging. It is an effort, it takes time (approx 10 mins from bot to cannon and 6 mins back) but everything goes where it should, it makes sense and there is a distinct sequence to follow. I find it enjoyable and I have never felt put off picking Sovereign up to do it. I also see no damage, chipping or wear from my attempts so far either. Occasionally I have to adjust him in cannon mode because the arms cannot always support the weight of the figure on the first attempt. There are zero issues with the cannon staying attached in this mode. That’s a pretty clever transformation the cannon and its mount have too, by the way. 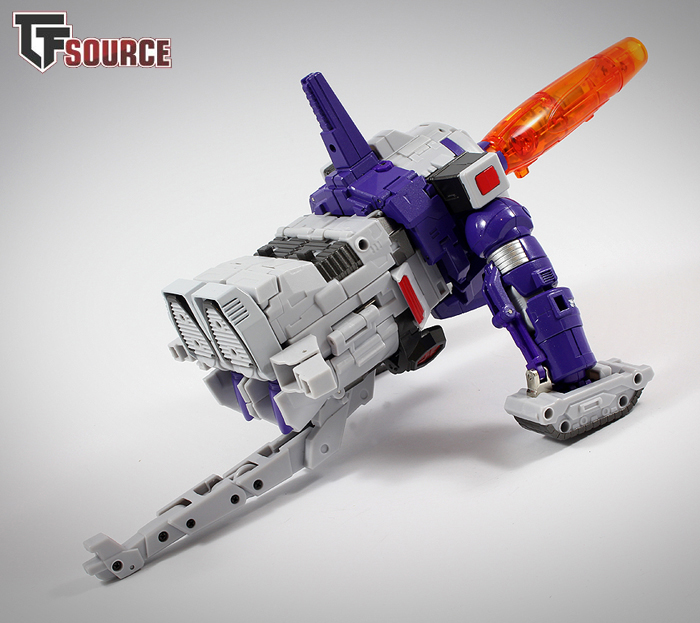 I do get that some people might feel the main body of this mode is a bit squished and short, but I think the extended tail out the back mitigates that somewhat. The colours are spot on, this cannon mode is solid and can be height-adjusted. I like how it looks from all angles and parts of the transformation really are a marvel. After some recent experiences, I am still of a mind to be impressed with things that actually tab as intended and advertised. 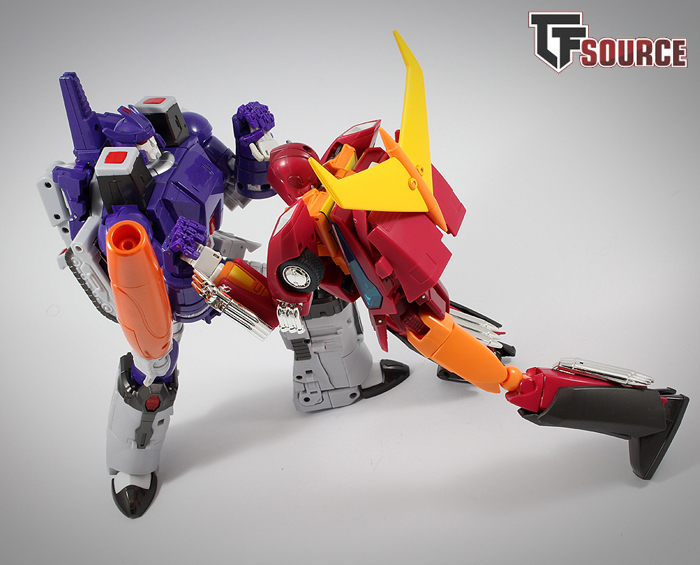 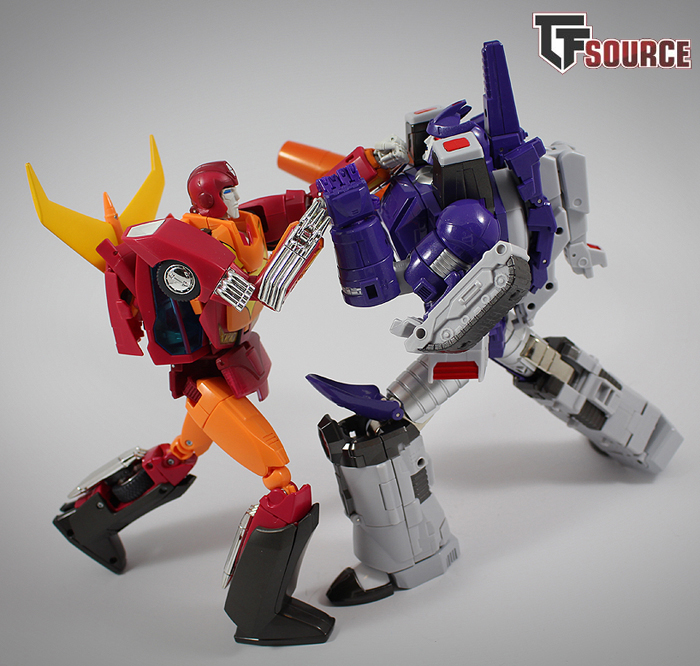 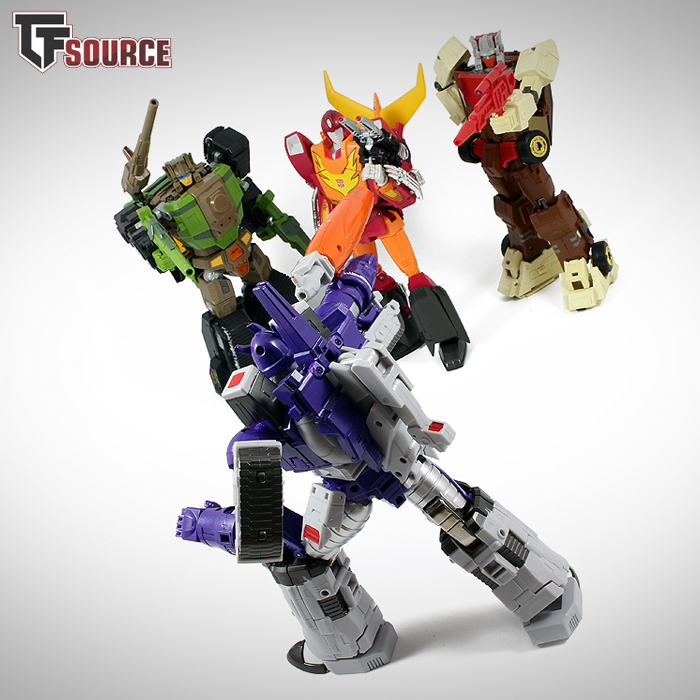 So here we are, then, a summary. FansToys FT-16 Sovereign looks *exactly* as I would want a screen-accurate Masterpiece-scale version of this significant character to look, and he has what I now consider to be one of the best headsculpts of the modern era of official and unofficial toys. He’s enormously posable, and even though the Matrix chain is short, that and his other accessories provide ample opportunity to pose and display him in many iconic situations. He’s of exactly the right scale to stand off against MP-9 and the various 3P Headmasterpieces we’ve had, my preferred scale. The figure is solid, has a highly engaging, involved but not stupid transformation (for my tastes) and deals with kibble neatly, employing just the right number of tabs and end positions for various parts. 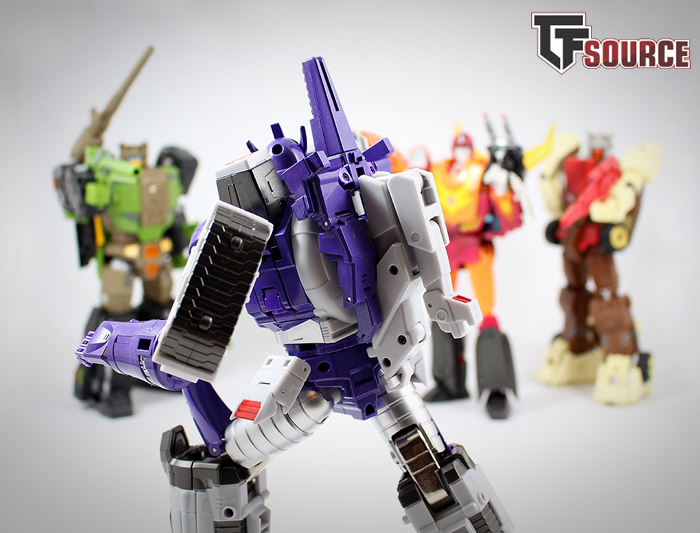 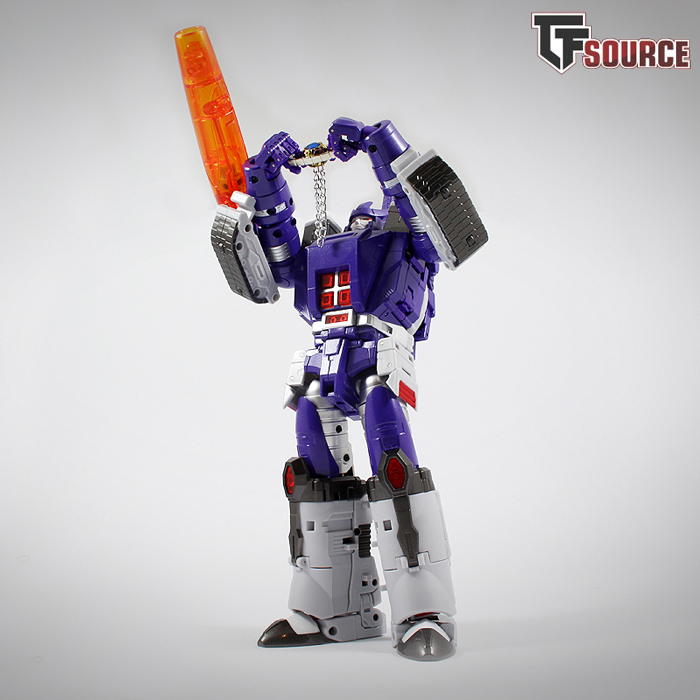 Ultimately, this is what I want and expect from 3rd party figures of this price point, from a company like FansToys that has a good standing with the collecting community, and has had enough years to now perfect their processes. They were asked to step up and produce better headsculpts, they now have arguably the best with Sovereign. I want to be able to hold MP-scale versions of characters and say out loud that I don’t mind if we never get an official take on them. For G1 Masterpiece, MakeToys have made me say that with Cupola and Ironwill, Ocular Max with Sphinx and even FansToys with Stomp. It’s taken a year for them to reach those same lofty heights again, but for me, Sovereign represents the very best of what this company has put out. What a phenomenal start to the year for 3rd party figures, I’ll be amazed if Sovereign is not in my top five of 2017. To Cybertron! 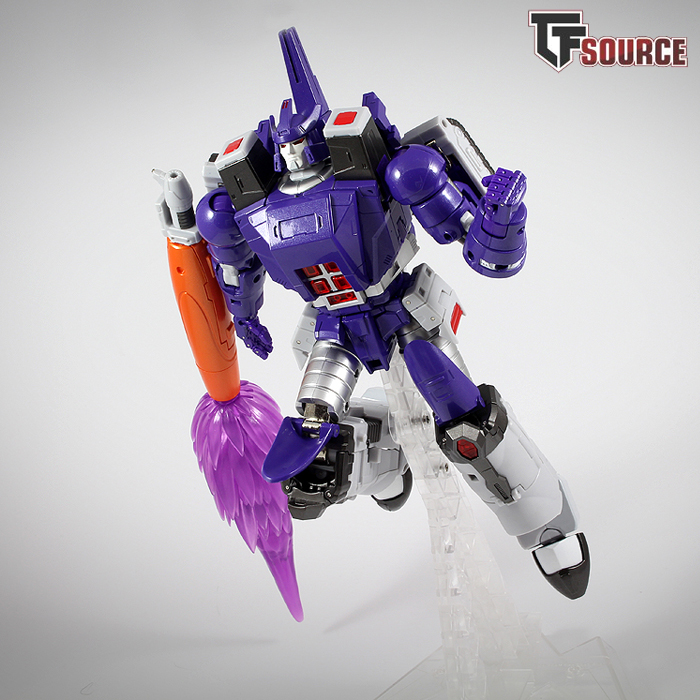