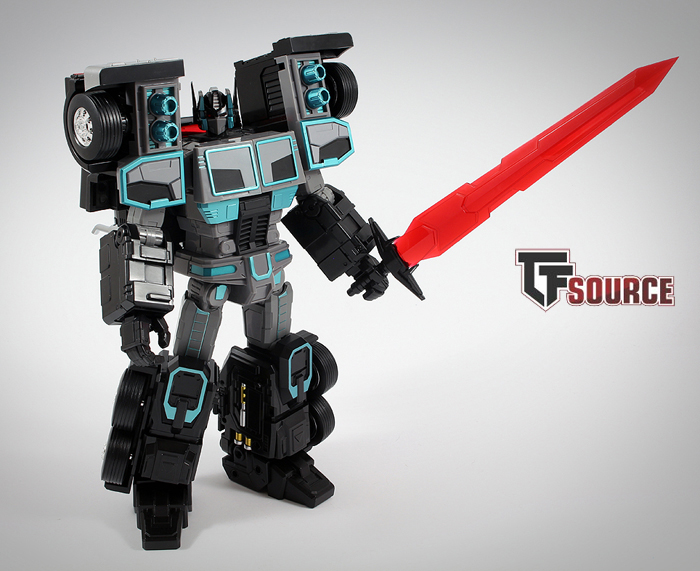 Get FansHobby Archenemy at TFSource

Fans Hobby may be a new 3rd party company trying their hand at the world of recognised transforming robot collectibles, but there’s a definite whiff of experience and quality behind this operation. Last week we reviewed their excellent MB-02 Megatooth, and this week we look at the dark leader from the MasterBuilder series, MB-01 Archenemy. This one is actually reaching collectors as we speak with another batch heading to certain stores any day now, so mine is a production version and ready to be assessed! 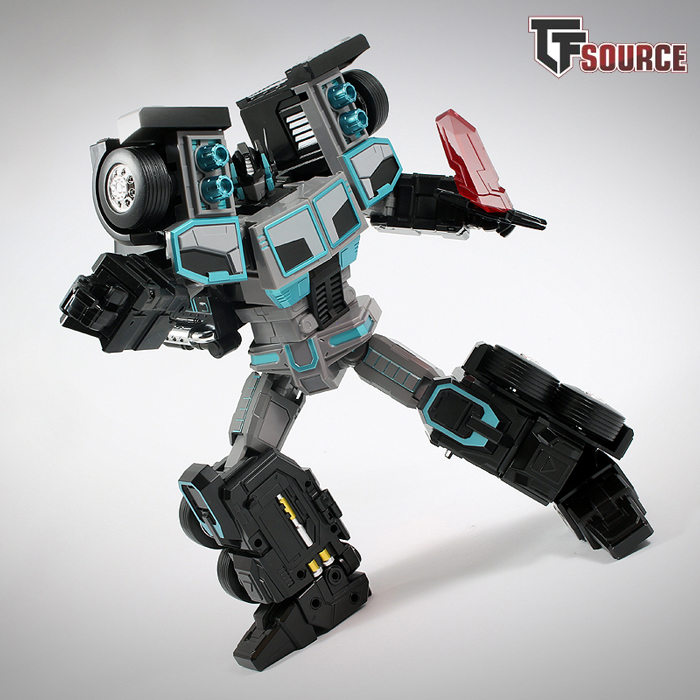 Just like Megatooth, Archenemy here who is based off the well-loved 2000/2001 repaint of a Generation 2 mould exudes presence and quality. He’s very heavy, very dense and tremendously impressive on first handling. However, my overwhelming first impression is that of the rubber smell from the tyres. My home still smells of it 2 weeks after unboxing. That aside, man alive is Archenemy gorgeous. He makes superb use of that timeless combination of black, turquoise and chrome. Add a dash of translucent red for extra sexy. Just look at that lovely gold and silver detailing on the inner legs. 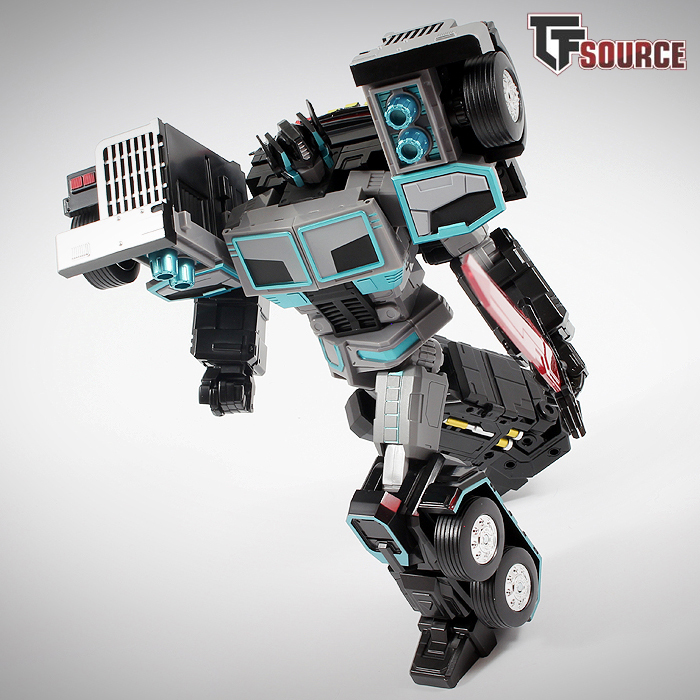 The feeling of power that Archenemy puts out makes him very faithful to the feel of the original inspiration, and at a significantly larger size and level of articulation. The legs have strong ratchets and the friction joints are very reliable. The shoulders on him are absolutely huge, as per the original version, so expect some limitations in what you can do in terms of posing there, but they do rotate backwards so you can raise the forearms up when he’s holding that magnificent red sword of his. 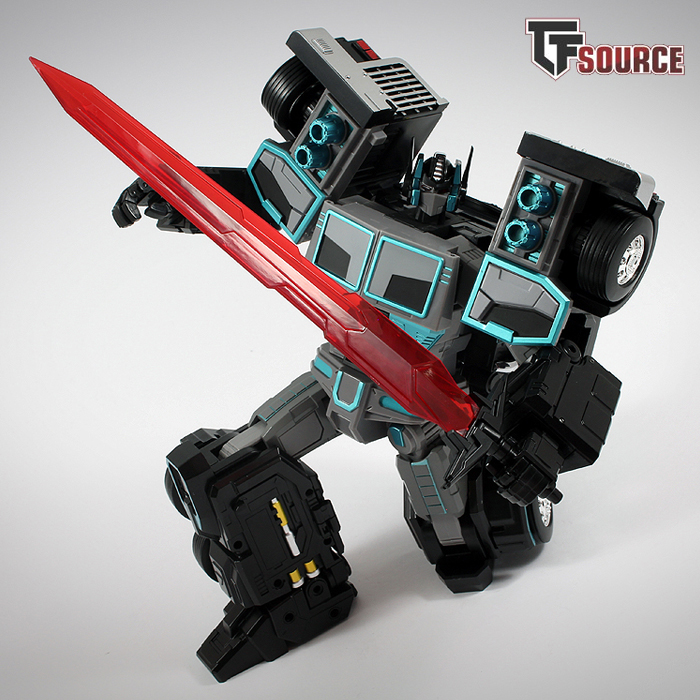 The knees and feet allow for an excellent kneeling pose, but a lack of outward ankle articulation and significant weight due to die cast mean he cannot do The Run. He’s very stable in the poses he can hold thanks to the large surface contact area of the die cast feet and heel spurs. There’s waist articulation and a pretty good range of neck movement too. All the arm and hand swivels you’d expect are there, but there’s not enough clearance from the big upper arms to allow for a full bicep flex/bend. Sword grip is excellent thanks to a tight fit and a rail-slide mechanism. The hands are articulated as MP-10, so an individually movable index finger but not a fully open palm or other articulated fingers. Thumb is fixed too. 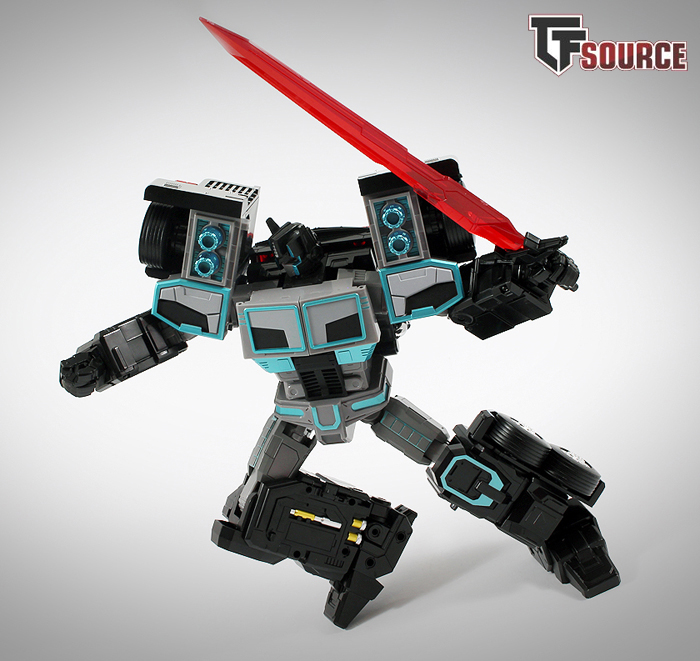 Archenemy is expressive, dynamic and hugely striking. Looks wise you just cannot fault how much he brings to the party, and as someone who has never owned the original, he’s absolutely everything I was hoping for. You can see in the above pic that ankle and toe articulation are pretty good, allowing for a nice range of stances. The chest has the same fake window and grille design as the original toy with as many visual nods to it as one could wish for, although you’d be forgiven for thinking at the $115 price point, they could have gone for something a tad more premium in that spot. The headsculpt is more G1 than G2, though. 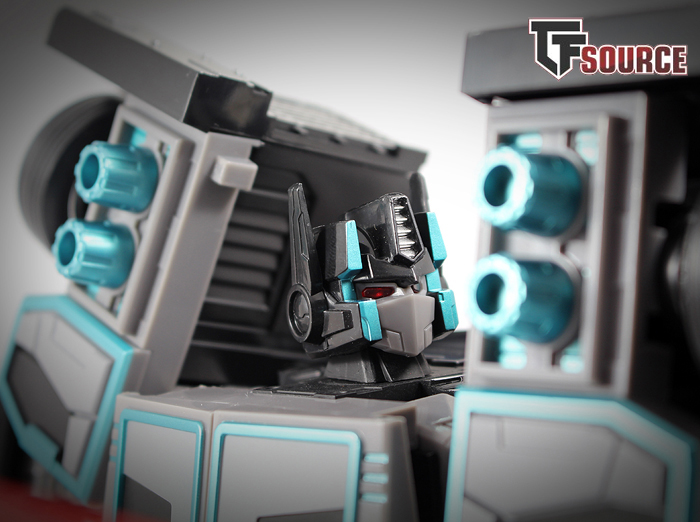 He doesn’t evoke the original figure too closely with that headsculpt, but at least it’s still a beauty. Depends how accurate you need him to be, and judging by some comments online where people cannot see the need for such a figure that so closely resembles the excellent original, maybe one should welcome the odd difference and departure? 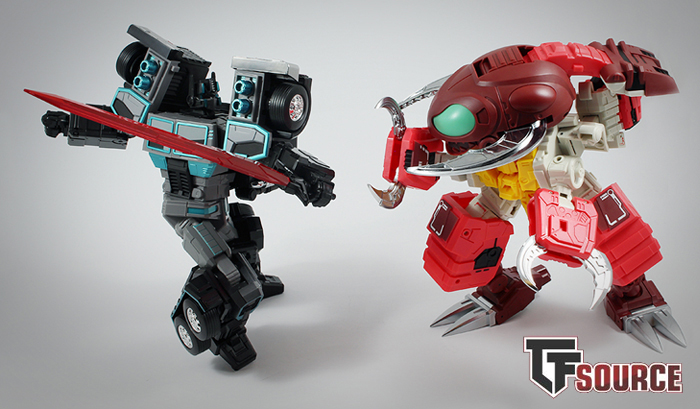 Archenemy is comparable in size to Megatooth, the two figures putting across a very positive image for Fans Hobby straight off the bat. All their subsequent product teasers seem to indicate a commitment to figures of this scale, and therefore the indicators are good for upcoming figure quality and interest, on my part at least. You will notice that Archenemy has quite a significant backpack, the truck cab basically. Sure, it’s again accurate but some have grumbled that on a figure this price in this day and age, something more could be done about it. It’s not bothered me in the slightest as it doesn’t hinder his articulation.

I should mention that Archenemy comes with a slip of paper instructing the owner NOT to try and pry open the chest flaps to reveal a matrix. This feature exists for the heroic repaint, but on Archenemy the flaps are glued shut. If one does try to pry them open, damage and even breakage will result. 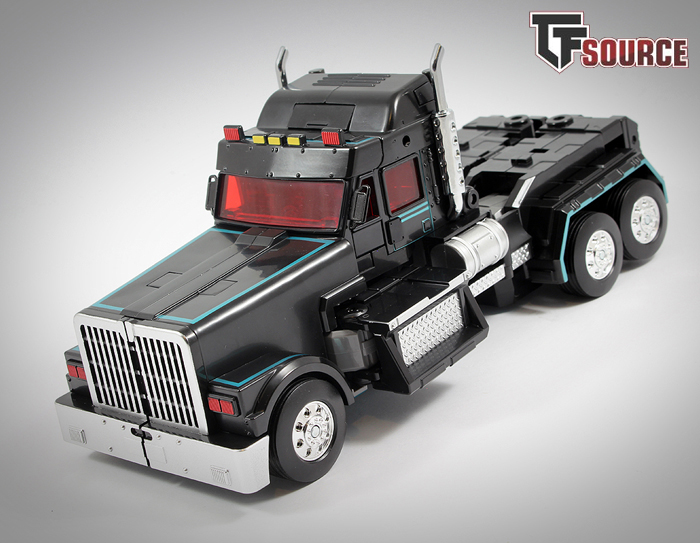 Truck mode. It’s gorgeous. Shiny, streamlined and uncomplicated, free-rolling and oozing visual appeal. It’s as much of a chunk as it appears in the pictures, and it makes me very happy to know Fans Hobby have his signature chrome trailer in development as we speak. Of course we would all have preferred to pay a few dollars more and have had it released with MB-01. Some initial imagery showed him having a gun accessory too, but all you get is the sword thus far. 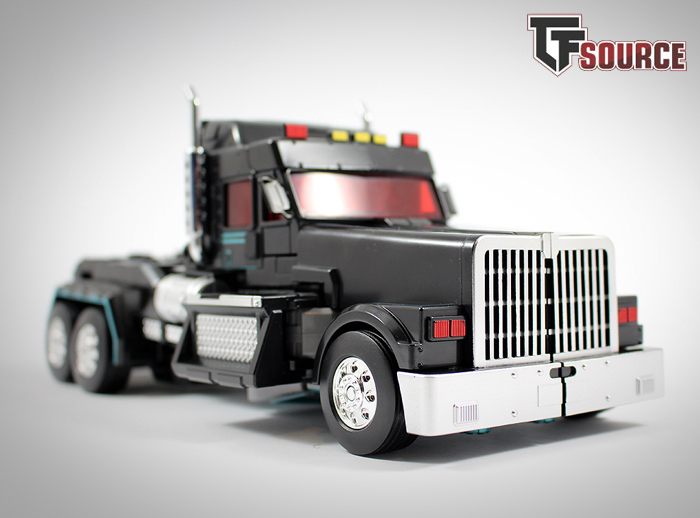 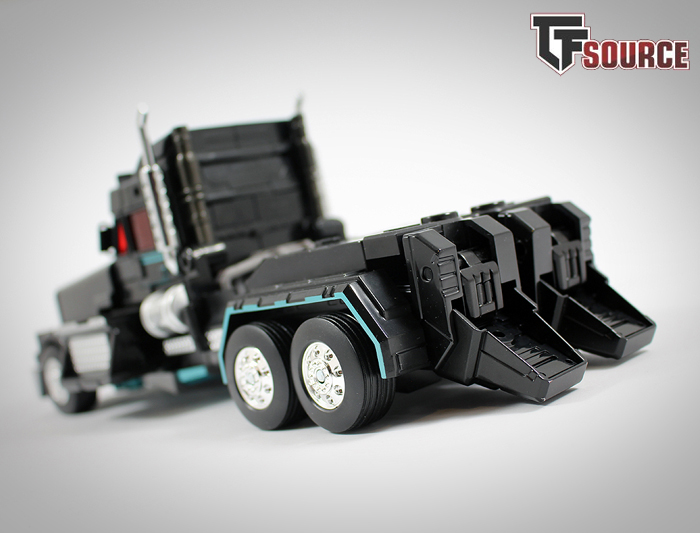 You might find the down-turned feet at the rear of the truck something of an eyesore. I do wish they were pointed upwards or folded away more tidily, but at least they do not drag along the ground as he rolls. On closer inspection you will also notice that the chrome fuel tanks along the sides of the truck fold out from inside the cab and then tab into the top of the legs. This means there’s a noticeable gap between them and the main chassis of the truck. As you can see in the photos, though, it’s quite well hidden from most angles. 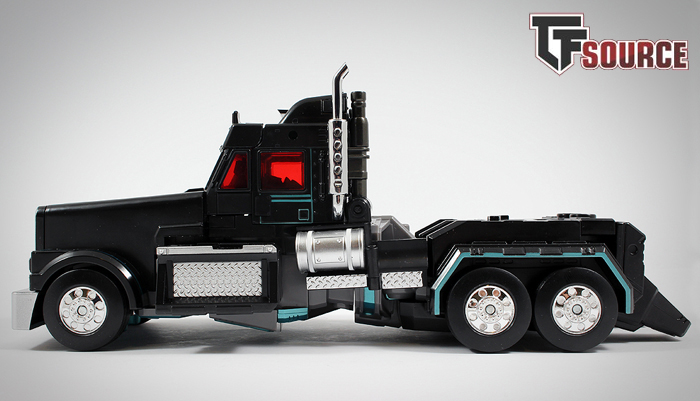 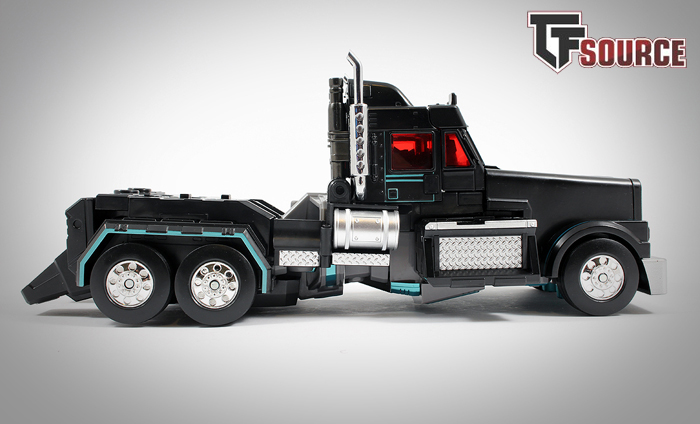 The transformation on Archenemy is pretty simple, but not without a couple of concerning steps. The actual concept of it is very straightforward: Extend legs, fold out feet, split cab and pull down shoulders to the side, flip out hands from wrists, push all wheelarch sections up, pull folded fuel tanks and robot head out of truck cab and rotate/unfold appropriately. Job done. 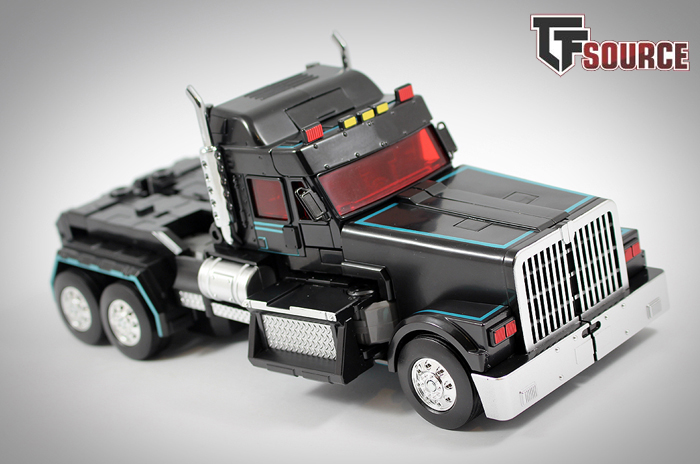 The steps that concern me a bit start when you fold the head back into the cab. First you have to rotate it so that it’s facing away from you, lower the antennae and it fits in under the lifted windscreen. Then you reach your fingers in there to rotate the head again to face outwards, and this can feel a little fiddly and tricky. The reason you do this is to make sure there’s enough clearance for the windscreen to shut again in a flush manner. The fuel tanks fold out without issue but I do feel the need to be careful as the connecting section it pivots around doesn’t look like it will be able to resist a whole lot of stress.

Finally, pulling the bulky shoulders up beyond the corners of the well filled-out chest is difficult. You don’t want to squeeze them past when there’s no clearance, I’ve already seen two collectors whose Archenemy arm has come off at that shoulder joint. So you have to rotate it in a way that allows full clearance before pushing them up. You can occasionally see the teeth in the joint separating a bit and you know you need a new approach. Once this is done, remember to extend the chest upwards for transformation to truck mode. Also remember that the shoulders can go one large click inwards at the joint when they are folded up, and this will help you close up the front halves of the truck cab nice and flush. When retracting the legs, do be sure to press the little release button a la MP-10 and MP-13. When extending them again, you may need to retract and extend a couple of times before it properly releases and extends fully. 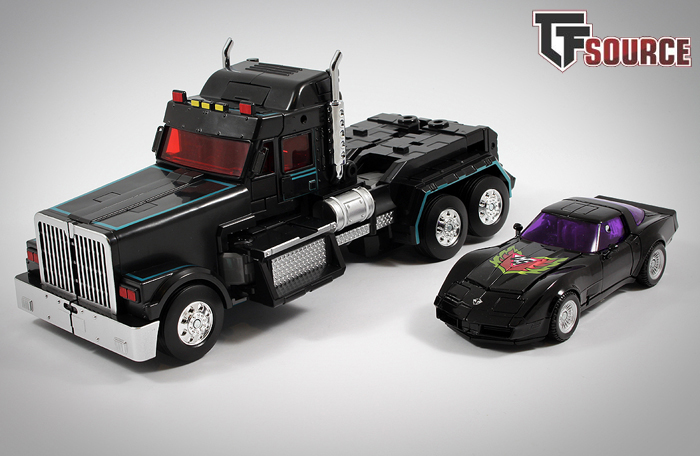 Now, I’ve not fallen foul of either of these issues yet. My specimen seems strong, very well put together and beautifully finished. I have had an awful lot of fun playing with Archenemy and he still impresses me every time I pick him up. Truck mode is quite large and dwarfs Masterpiece cars and trucks. He’s going to look incredible with the eventual trailer. 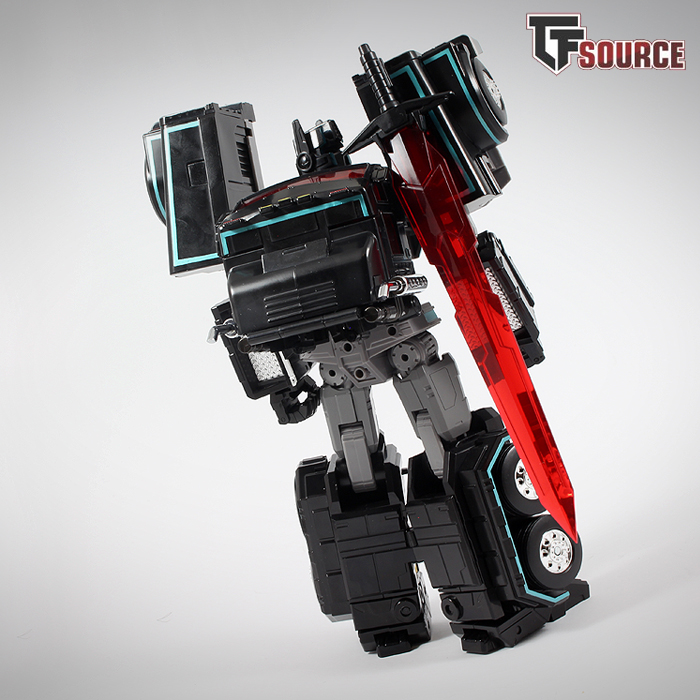 The one thing that irks me about Archenemy is the sword. For a start, one half of the hilt came out of the package by itself, not attached to the other half or the rest of the sword. I’m going to have to glue it back on because it just won’t stay clipped or attached for longer than a minute. Secondly, like Megatooth, Archenemy’s hand does not completely close around the sword, so it disrupts the suspension of disbelief a little bit. Lastly, you can rotate up a small peg in the centre of the hilt which in turn tabs into the small rectangular (and rotating) panels on the hood of the truck for robot mode storage (demonstrated above). I found this peg on the sword hilt impossible to rotate with my fingers, I needed a small screwdriver head to properly get it out. Rotating the small rectangular panel on the truck hood wasn’t easy either. 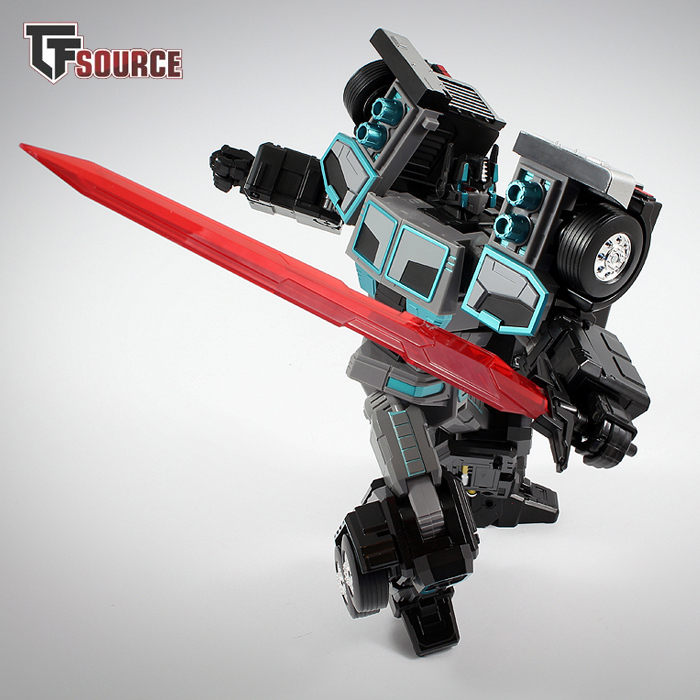 Make no mistake, this is a tremendous figure, it just cannot be as blissfully transformed with abandon as Megatooth can. However, by 3P standards, Archenemy is a total walk in the park to convert and the end result in both directions is breathtaking, satisfying and stacked with playability. It’s equal parts great toy as it is collector’s grade product. It is also a wonderfully strong tribute to a well-loved figure and yet another excellent advert for the quality of Fans Hobby and their vision of a slightly different 3rd party scene at Masterpiece scale. I love this toy, and together with MMC Titanika, Fans Hobby Megatooth and FansToys Sovereign, it is helping bring my general estimation of 3P products back where it should be. This is an expensive figure, it will cost you even more should you want the trailer somewhere down the line, and of course you’re gonna want the trailer. Rubber smell, dodgy sword and a raised eyebrow indicating care during transformation of the shoulders aside, this is another resounding success for this company. An emphatic 100% strike rate for Fans Hobby in 2017. Two out of two, and it was not so long ago that another ‘Fans’ company got that exact same score from me on their debut twosome. 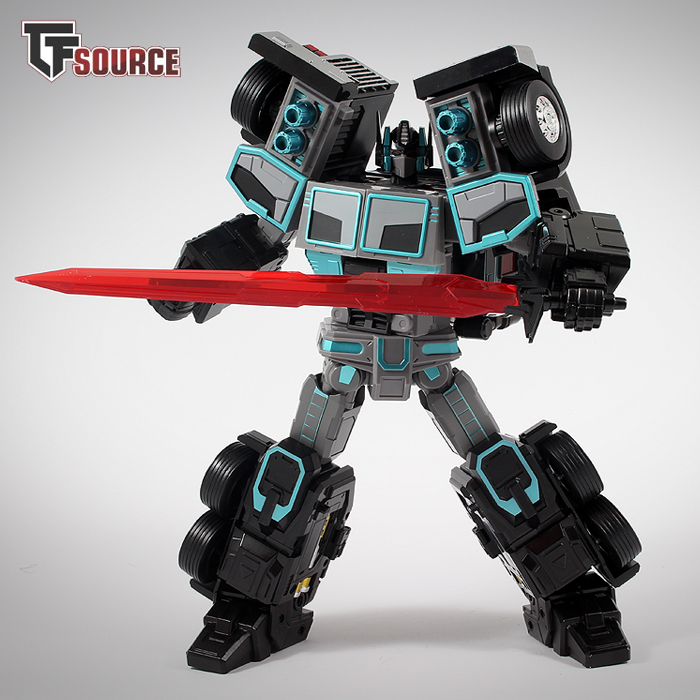