Get Masterpiece and 3rd Party TFs at TFSource

It’s that time of year again where we tend to list our favourite Transformers-related toy purchases. Quite often I’ve been very clear on which bots will populate the top of the list and 2016 is no different. What has really surprised me, though, is that for the third year running, I feel the overall quality of official and unofficial toys we’ve been getting has improved drastically. I usually do a top five, but this year I had to extend it to a top ten over two weeks because there was no way a single article could do justice to the incredible year we’re having for new toys. I still can’t quite believe the figures I’ve had to leave out. Please keep in mind that this list is based entirely on my own preferences, opinions and purchases, and I did not buy everything this year, therefore if a figure you love is missing you can put it down to that. So without further ado, and one prays no more adieus, here are numbers ten to six of 2016. 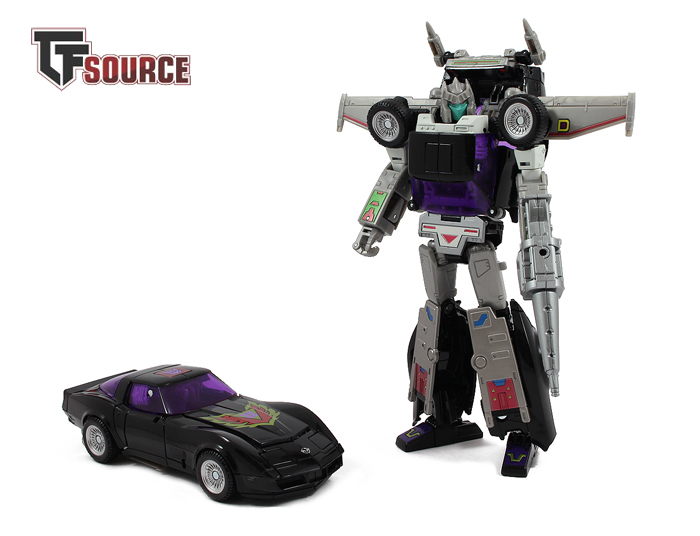 As Loudpedal is in fact not a new mould for 2016, I had to penalise him a little in terms of how high he appeared on the list, but he absolutely had to appear. I am fully aware of how niche the appeal of this Tokyo Toy Show exclusive Masterpiece repaint is, my own love for it coming directly from the Takara Diaclone Corvette Stingray, released in black solely for the Finnish market. I lusted after that vintage toy for years, I’ve owned it and documented so much about it that I feel a sense of (unjustified and over-entitled) ownership of it! As a result, this was an announcement that sent me stratospheric with excitement. 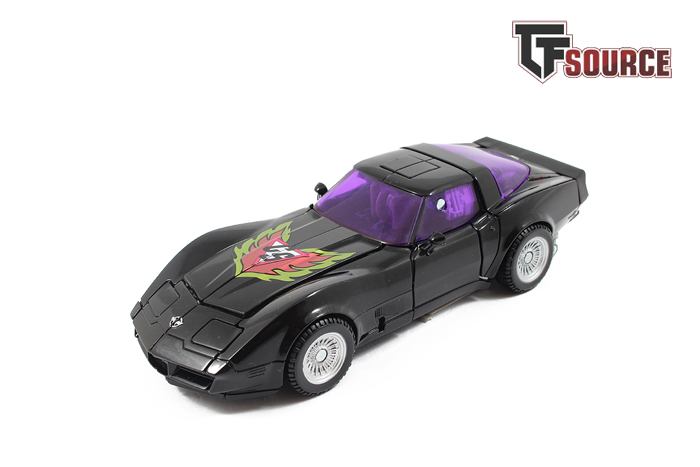 Despite the addition of highly visible Decepticon features, Loudpedal did not disappoint when in hand. The lengths to which TakaraTomy went to homage the original Diaclone variant astonished me. Loudpedal was colour matched virtually perfectly, and they even went as far as to give him Diaclone-accurate stickers which were optional, covering the Decepticon detailing. The head was remoulded from Tracks to have a toy-accurate facemask and they gave the shins a metallic colour effect to perfectly re-create the look of the die-cast shins on the vintage Corvette. This is quite honestly the best vintage toy homage I’ve ever owned, and the mould is already a favourite of mine. I felt like Loudpedal was released just for me, and I adore the attention TakaraTomy gave him. 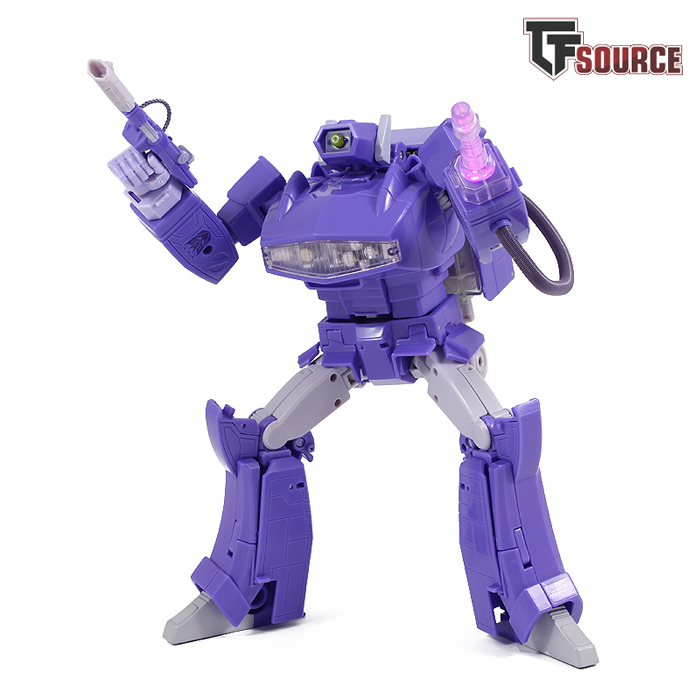 TakaraTomy again, and Masterpiece again, this time the Decepticon Laserwave – or Shockwave to us in the West. We already had a quite exceptional MP-scale figure in FansToys Quakewave on the market that had found its way into most collections, so TakaraTomy had a great deal to do in order to dethrone that most iconic of 3rd Party figures. For me, they did so effortlessly, but that does not apply to all. For those who wanted a Marvel Comics or toy-based Laserwave, MP-29 was too lilac, too short and not bulky enough. I come from a cartoon-based background where Transformers are concerned, so my personal Shockwave was nailed by MP-29. 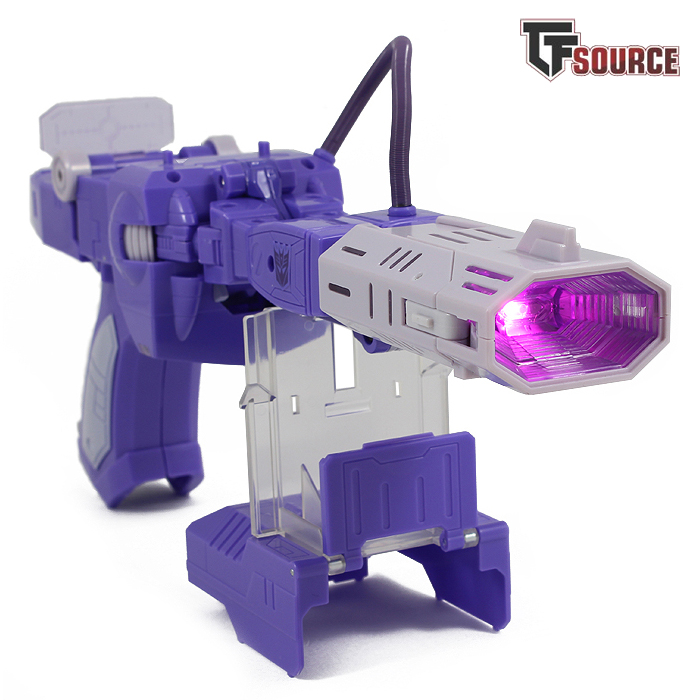 Unlike Quakewave, I found Laserwave to have a delightfully fluid and somewhat genius transformation, but he was nowhere near as poseable. In robot mode, Laserwave has the most powerful and perfectly (cartoon) signature stance that oozes as much character as a toy with no face ever could. The electronics are delightful, the stickers horrible but somewhat essential. Laserwave makes me sigh with appreciation every time I pick him up, and he draws my eye constantly. I will, quite honestly, never need another Shockwave toy again, Quakewave has been dethroned in this home. 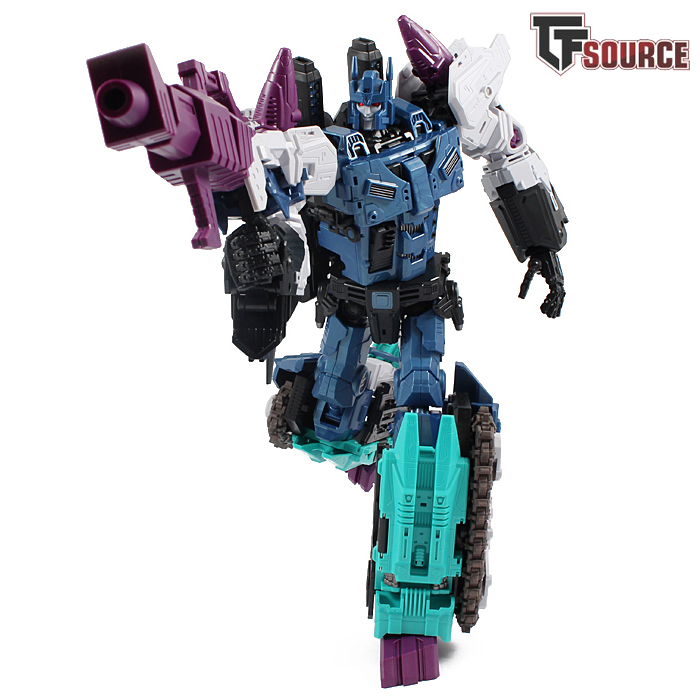 This is the point in the list where the serious wow factor kicks in. Carnifex is a very recent addition to my collection and I gave him a positively glowing review. Aesthetically he’s breathtaking; his size and stature, sheer presence and character are off the scale. This is without a doubt the best figure MMC have produced since Feral Rex. The price point is astronomical, but it just goes to show that when MMC really want to knock it out of the park, they can. I must admit that Carnifex has slipped a few places on this list just in the last week as a few new entries scored very highly and I discovered an irritating QC issue with the upper thigh panels, but he’s still phenomenal. 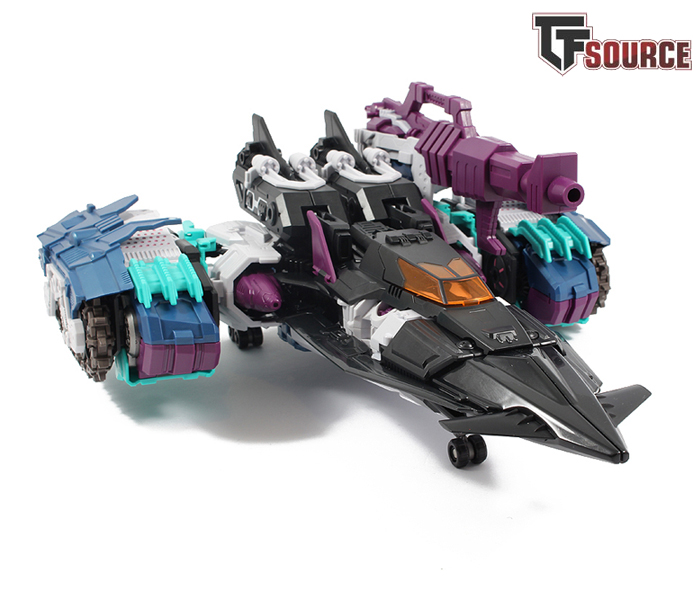 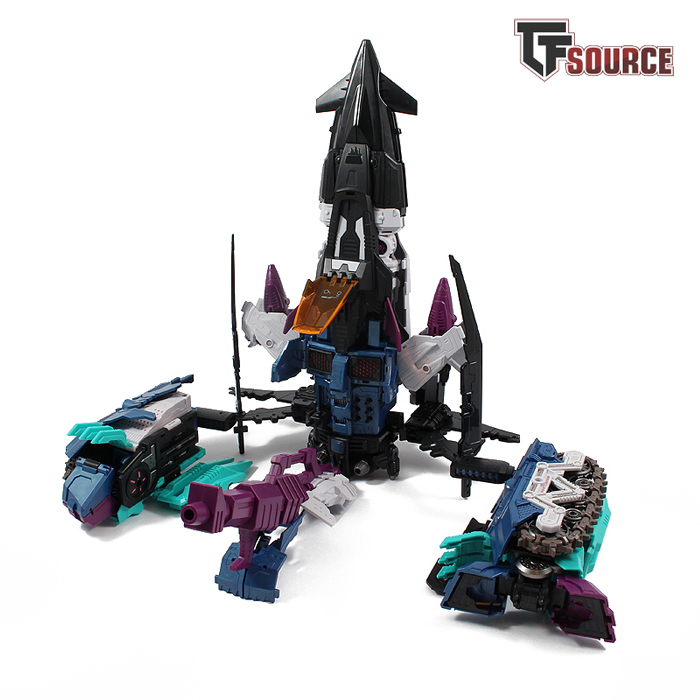 His transformation presents an infuriating sequence of fiddling that the instructions don’t assist at all with, but once you’ve conquered the trick, it’s actually very enjoyable to transform and a lovely update to the original vintage monster. The headsculpt and overall accuracy pay gorgeous tribute to his original comic inspiration, and the fact that MMC engineered him with a respectable base mode impressed me. If you can afford him, I’d recommend Carnifex to virtually every collector I know, a tremendously impressive and quality figure. 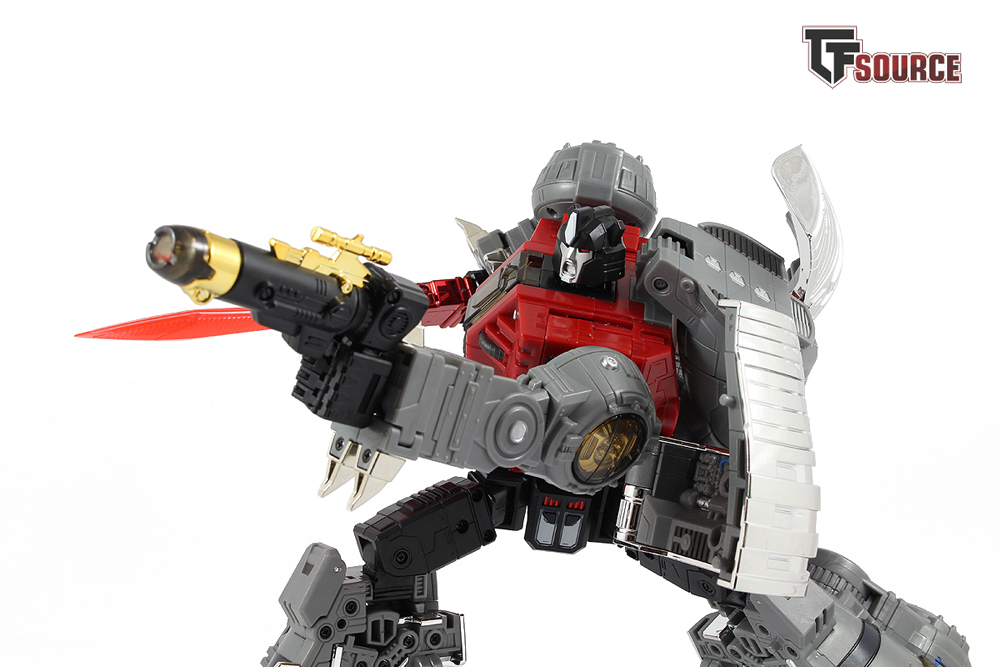 FansToys returned to their very best at the start of 2016 with the fourth of their Iron Dibots. They seemed to take all the lessons they had learned from previous Dibot releases and refined their art to create what is easily their best item to date. Both modes are fantastic and immediately wow you, the transformation is free of frustration, the quality is top notch and they even managed to put out a good – a very good – headsculpt. 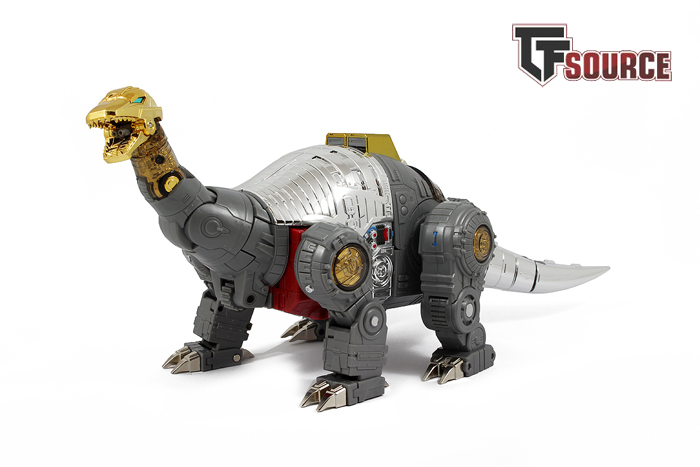 Stomp even features, predictably but brilliantly, the eye-popping accessory that allows one to re-create the famous Devastator movie punch scene. This towering bronto is exactly what we all expected FT to put out regularly post-Quakewave, but never quite got to this standard. Most other years, Stomp would be at the summit of this list, but 2016 has been utterly unprecedented, not just for 3P product, but mainly official. As tidy and admirable as Stomp’s leg transformation is, and as beautiful as he is overall in both modes, I’ve got him at number seven. But such is the quality of this year that even the toy at number seven is a simply essential purchase. 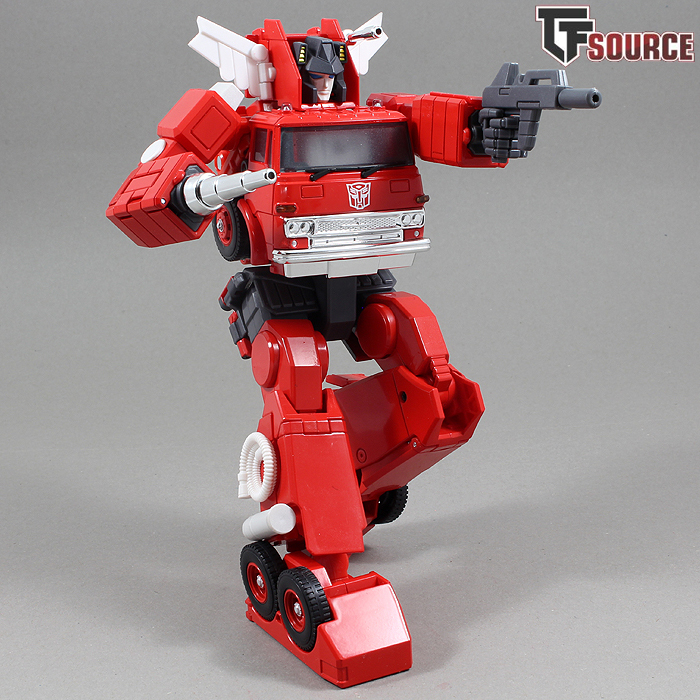 This damn toy, he just waltzes right into my collection before Christmas, makes a joke of my year-long cultivated top ten list, and worse than that, he moves up the list by the day. With two or three moments of distilled genius in the transformation, a plethora of accessories from the sublime to the perfectly ridiculous, Inferno shows that TakaraTomy have lost absolutely none of their mastery of the transforming robot toy. It’s been a divisive one because of the heavy bent towards plain cartoon animation model aesthetics, but in hand those concerns just melt away. He’s rock solid, infinitely posable and hugely expressive. 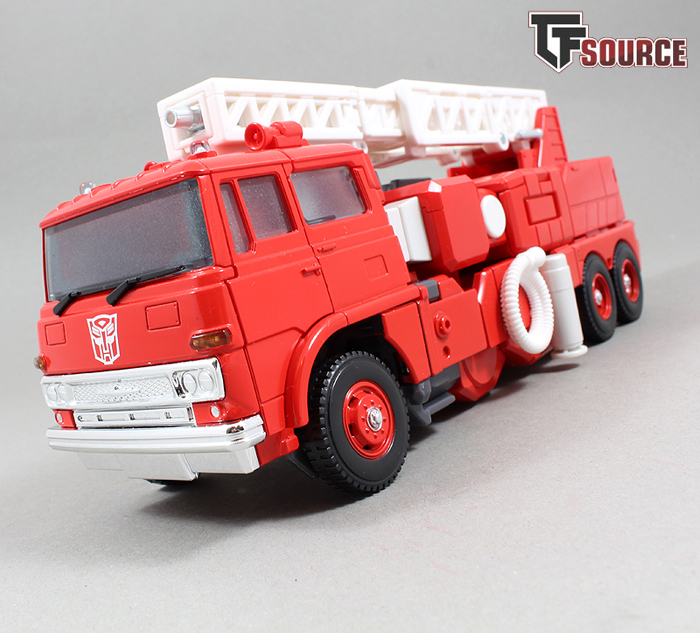 Inferno just evokes the feeling that TakaraTomy can do whatever they want with the medium and all that’s limiting them is their design brief, price point and current conceptual drive. The only reason Inferno isn’t higher for me is that I fear he’s still benefiting from ‘New Shiny Toy’ syndrome, not to mention my initial lack of major enthusiasm compared to other owners. But rest assured, this is a truly magnificent figure and it really blows the other MP-scaled unofficial Inferno toys out of the water, and I’ve owned and reviewed both of those. The price is high, there are a few niggling paint apps issues and he does come with the single most abused comedy accessory ever, but this figure is pure class.

That’s #10 to #6 decided then, make sure you join us next week for the top five! 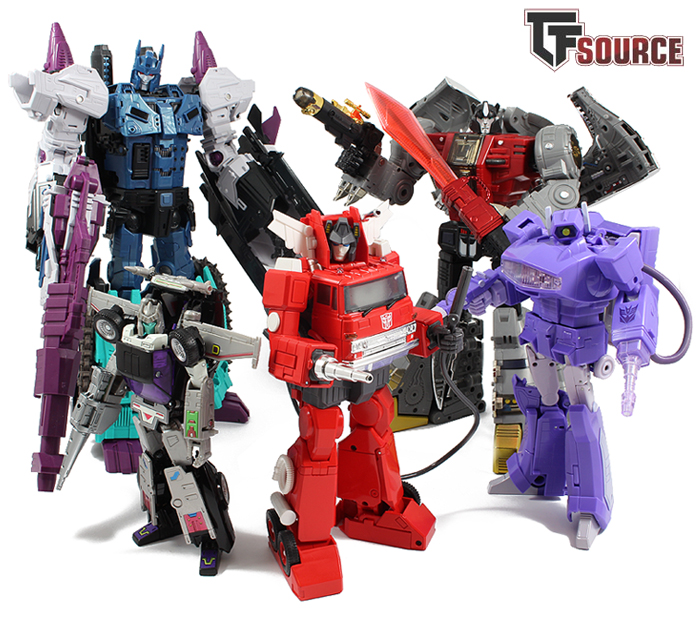