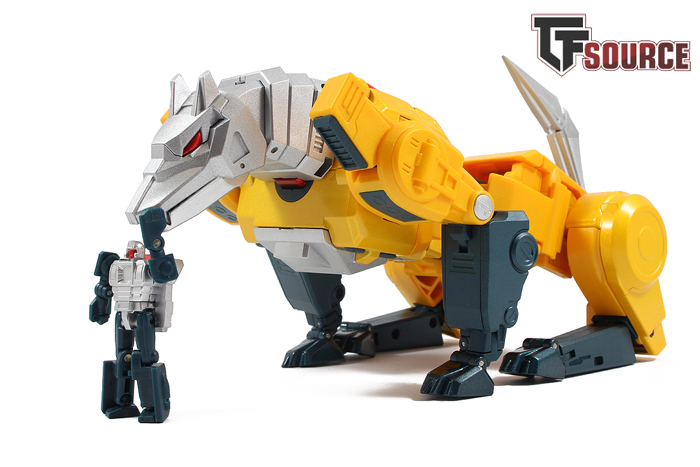 Get FansToys FT-18 Lupus at TFSource

Why on Earth are FansToys doing Headmasters? Can’t they finish the Iron Dibots, or Car Robots, or the many products they’ve teased before throwing their hat into yet another sub-category ring to compete with other 3rd party companies? They’ve done it, though, and they’ve gone up against some of the best quality opposition there is with MakeToys Re:Master series already on the path to giving us Masterpiece scale Headmaster figures. In my opinion, FansToys were bested by MakeToys on Willis versus Gundog as well as Spotter versus Visualizers, but when FT get something right, boy do they get it right. So have they gotten Headmasters right? 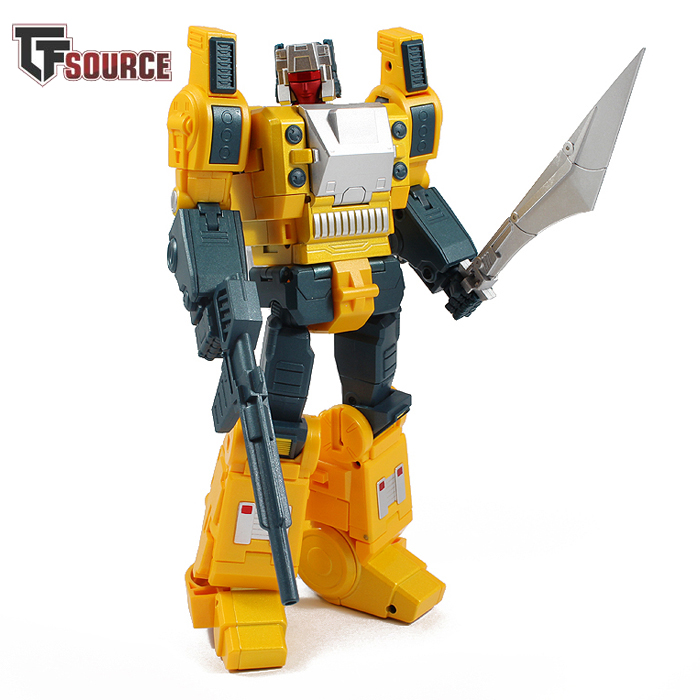 FansToys FT-18 is Lupus, the extremely well known and immediately recognisable evil Headmaster who turns from a bright yellow robot into a bright yellow wolf. Lupus means wolf in Latin, and there’s even a star constellation of the same name and meaning. FansToys have given Lupus the most basic accessories; he comes with the transforming head, sword/tail and gun. He also has a replacement red face with a slightly wider nose and mouth. The instructions show a replacement FT Tesla face, but it was cancelled from this package and will now come with a later FT product. The chest opens to show the mini tech-spec meter, with all details statically moulded or painted on. No moving tumblers here, that technology apparently belongs firmly in the 1980s. 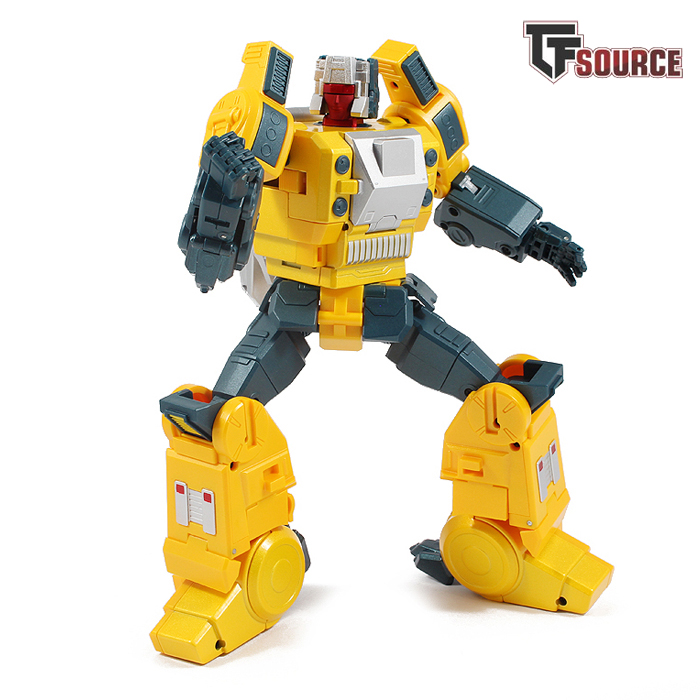 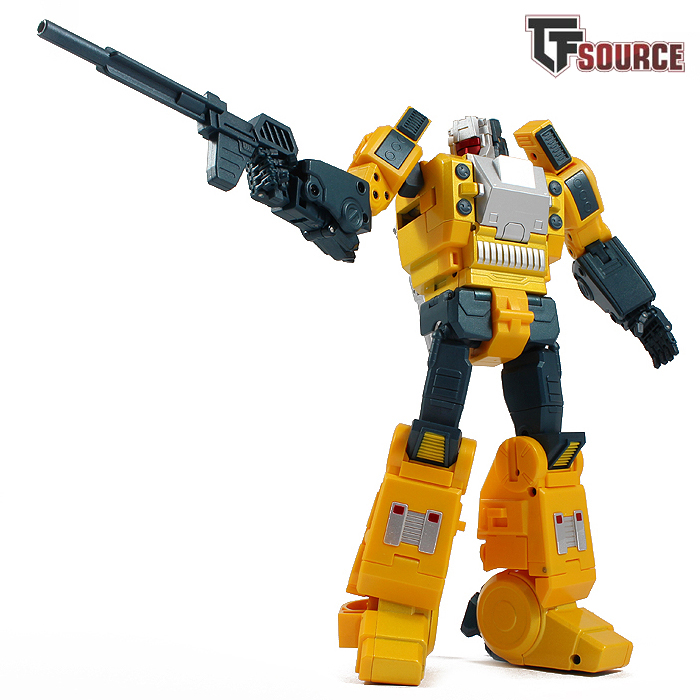 As you have come to expect with many FansToys products, Lupus has prodigious weight to him due to considerable die cast metal content. FT have gone heavily for the animation accurate look, and this has resulted in quite a featureless robot mode. It’s minimalist and borderline dull, but that’s not a crime, it’s an aesthetic and conceptual product choice that we can buy into or pass on. And actually, the original inspiration does not exactly have beast parts hanging off every limb, they are equally well hidden from the front, and Lupus improves on the vintage and recent mainline representation by dint of having virtually perfect robot mode proportions. He almost looks like a straight up action figure. This has been very tidily accomplished. 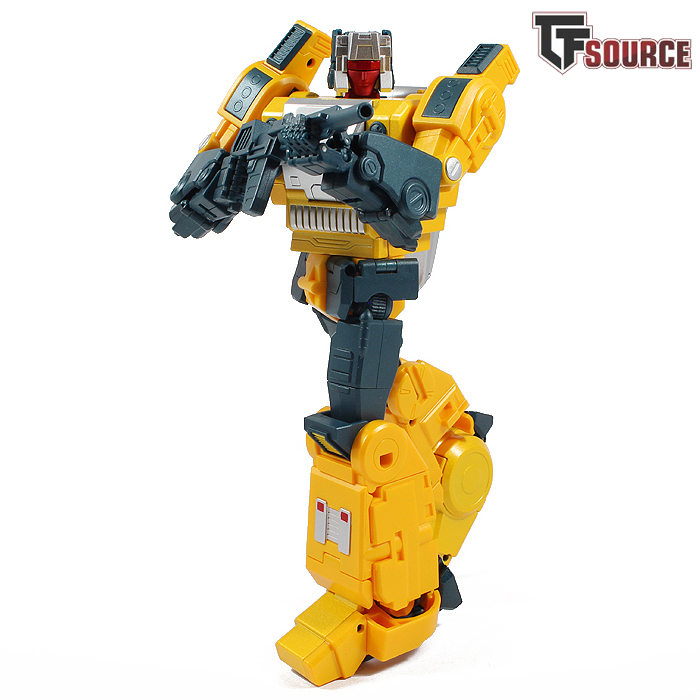 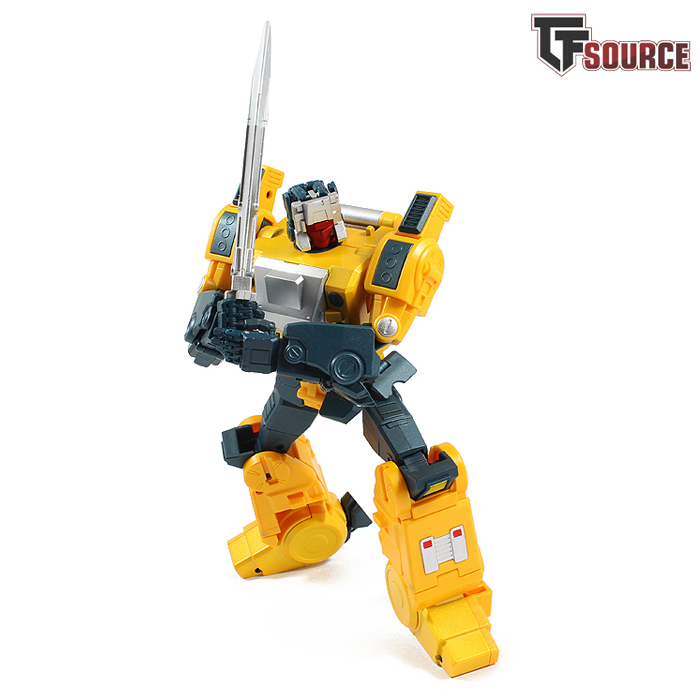 Sure, Lupus is not covered in vents, dials, circuitry and panel detailing, and sure, some of his surfaces are plain and simplistic to mimic the cartoon portrayal of him, but there is something intangible, irrational and infuriating about the featureless lump that has grown on me since I received him. I was pretty critical of Lupus on initial handling, fuelled by the fact that he doesn’t fully stand on his yellow feet, instead utilising a fair amount of the paint-donating blue beast legs folded underneath and hindering stability. This can on occasion give the impression of slight levitation. He’s made a case for himself, though, based purely on his direct simplicity. 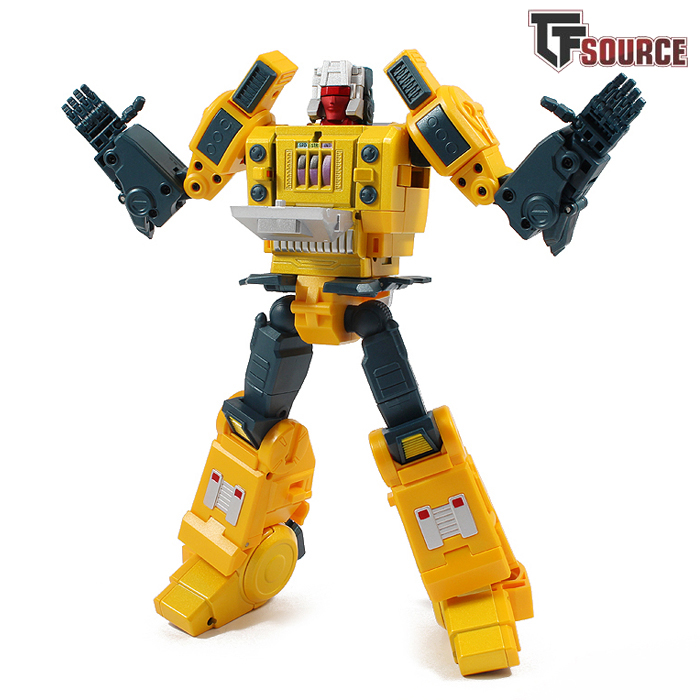 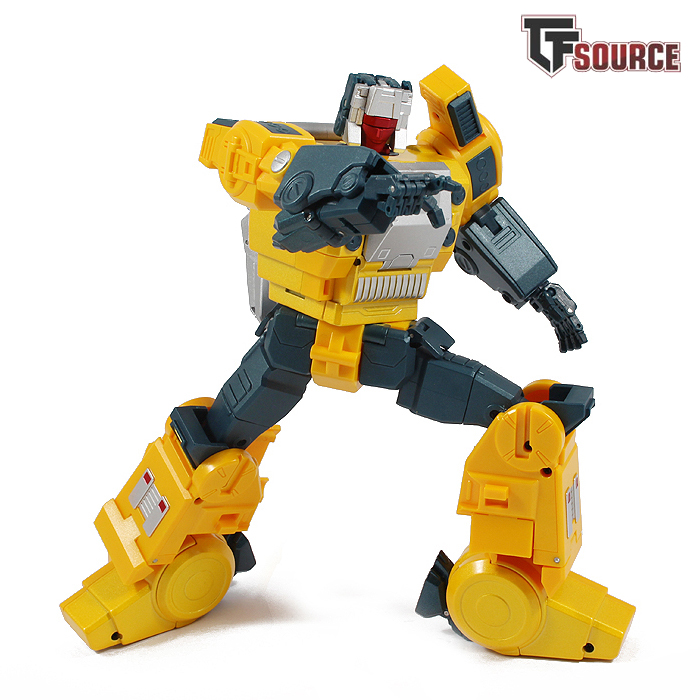 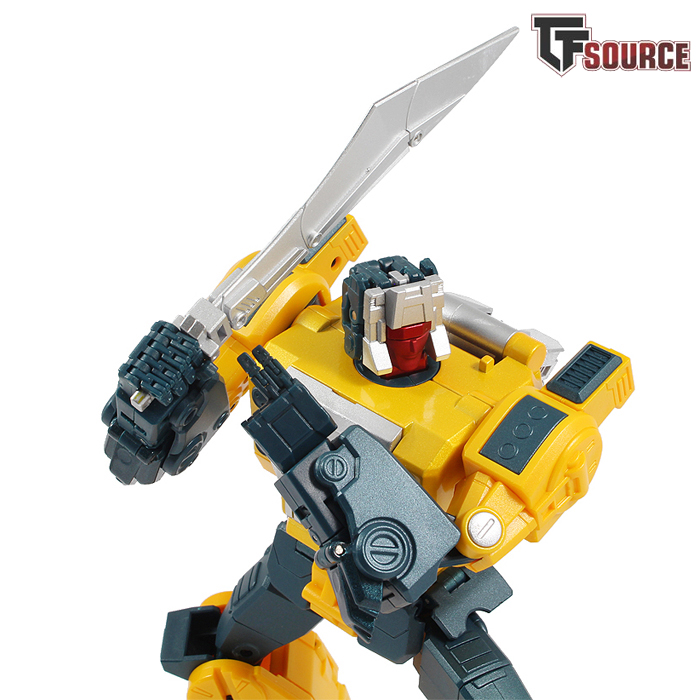 The posability is somewhat infuriating because he can pull of virtually all of my favourite poses and stances while looking very natural doing so. However, there are some serious limitations in the outward movement of his shoulders and very little angle available in the ankle tilt. The elbows are also single-jointed, so they don’t allow you to fold the forearms up very far. I’m also sad to say this continuing trend of 3rd party figures being rubbish at holding their accessories continues unabated here with Lupus. The gun and sword never clip into the palm recesses with any sort of satisfying finality, and the gentlest contact knocks them out of place. I am continuously amazed that high end products – even some from TakaraTomy – fail to get this absolutely basic feature right. Hand and finger articulation is generally excellent otherwise, very expressive! 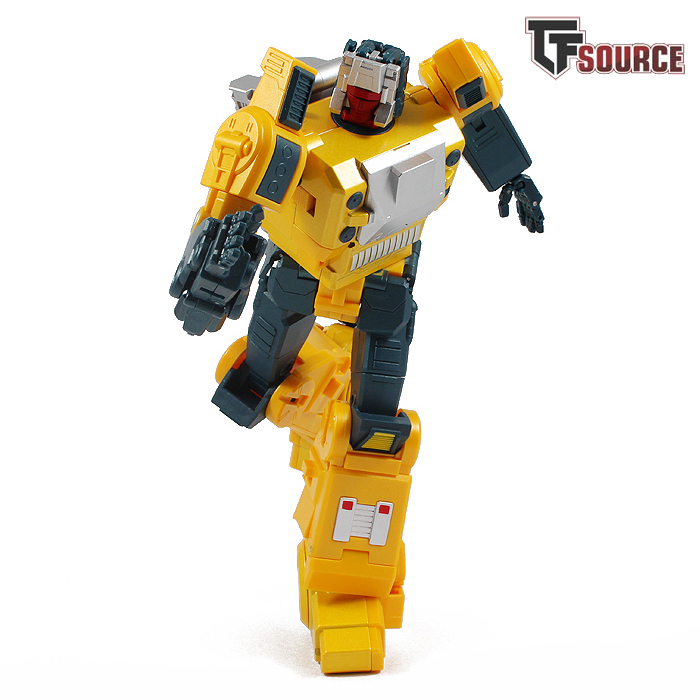 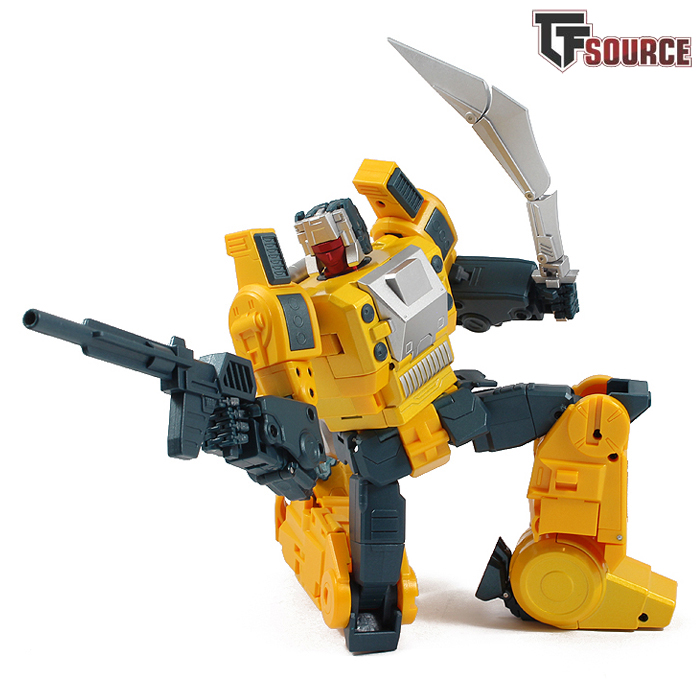 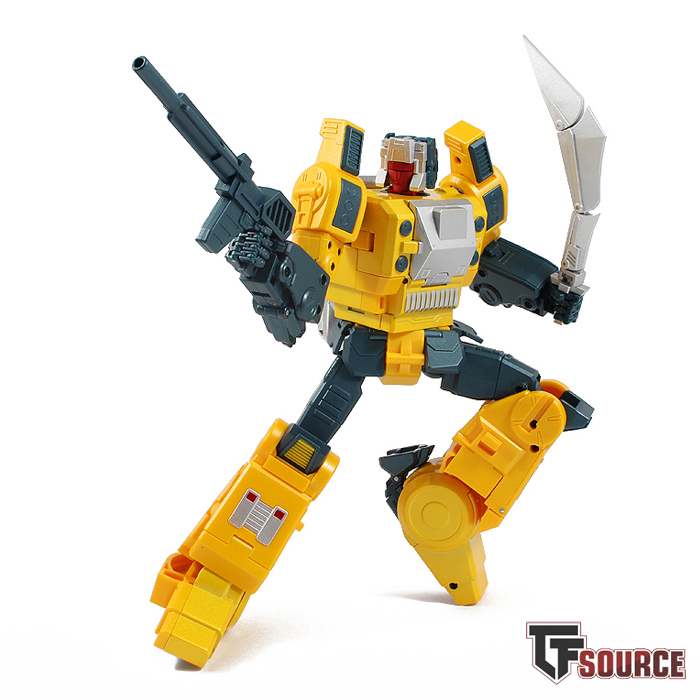 And there he goes with the dynamic poses! They may not have gone for a distinctive and memorable look as Fansproject and Hasbro/TakaraTomy have done, but the bot can sure strike a pose. Truly, if he could hold his weapons and bend further at the ankle and elbows, Lupus would be rip-roaring fun in robot mode. I should also mention that I find the sparkly blue and silver paint used on Lupus absolutely hypnotising. I just wish the paint on his beast legs (tucked under the robot feet) hadn’t marked my photo background. 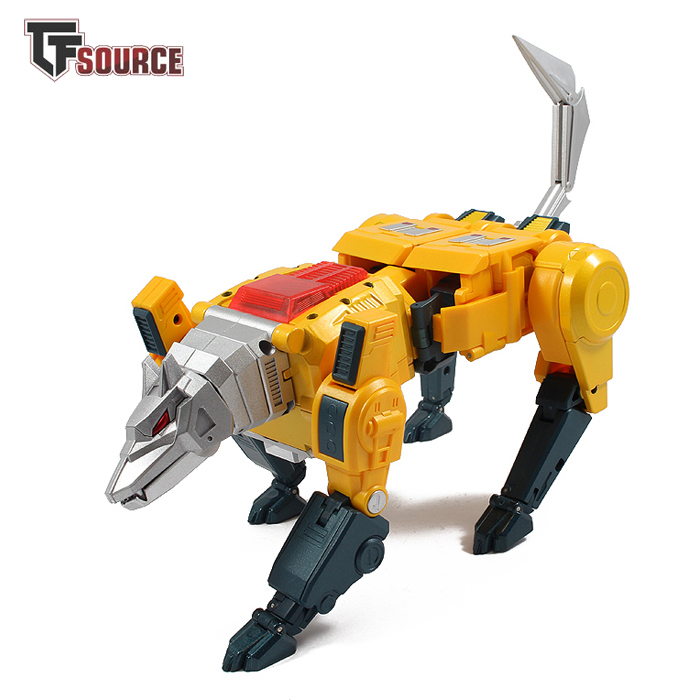 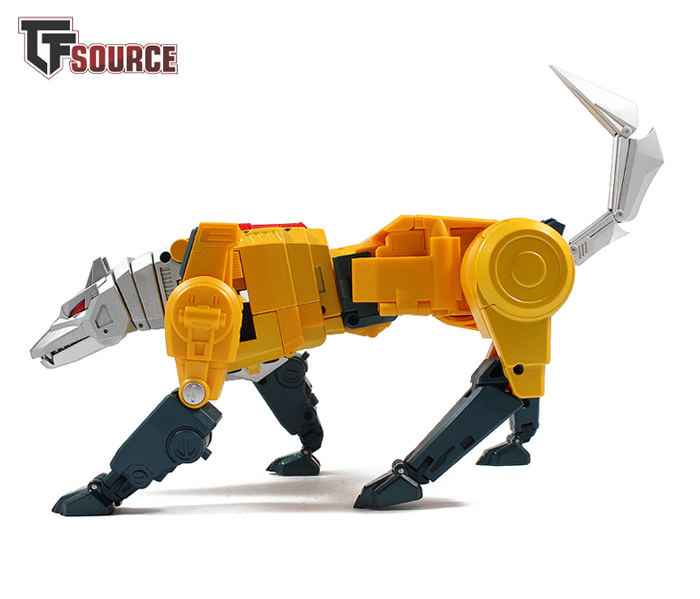 Lupus is seriously easy to transform, I think Titans Return deluxes have more complexity. This is not a negative though, it suits the way he looks and feels. Somehow, FansToys – probably inadvertently – have recreated the precise vibe that made the original Headmasters range stand out to starkly from the Transformers that had gone before. It’s blocky, slightly less sophisticated, very straightforward to convert (one of the first 3rd party figures I didn’t use instructions for) and quite intuitive. Yet, somehow, it still comes with a few issues likely to frustrate. 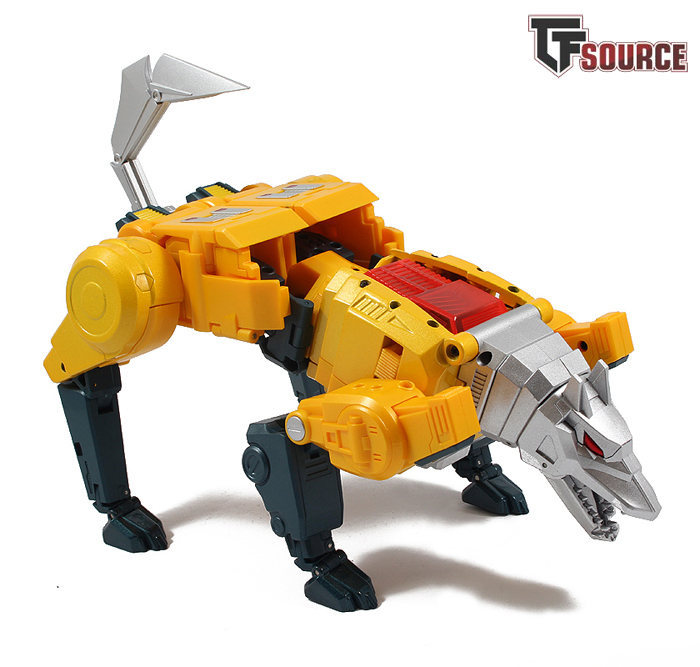 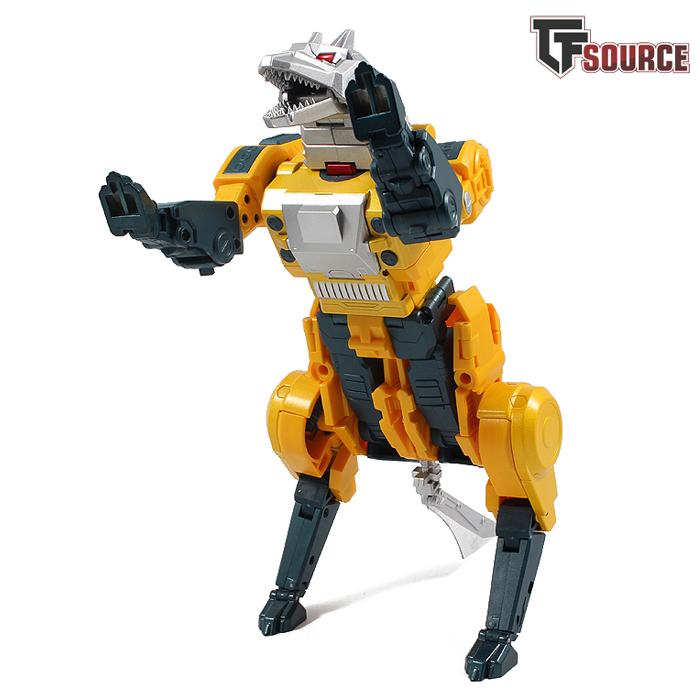 I’ve always found user friendly moulding is another strength of HasTak, they don’t always care if they break up the suspension of disbelief or aesthetic by adding a raised section on a fist, wrist or something else to help with the fluidity and ease of transformation. I know 3P products like this are aimed at collectors where visuals and a seamless look sit very high on the priority list for most concerned, but this whole digging for a concealed part is a right pain. The calf flaps on Lupus regularly go where they shouldn’t and have to be dug out, and the flaps under the arm that must be moved to allow the front beast legs to be stored also have to be dug out or pushed in with some effort. Then there’s the cockpit which you must slide upwards to the surface of his back. It should hold, but the slightest touch sends it plummeting back into his body. Other than that, the transformation is simple as pie and really fast. 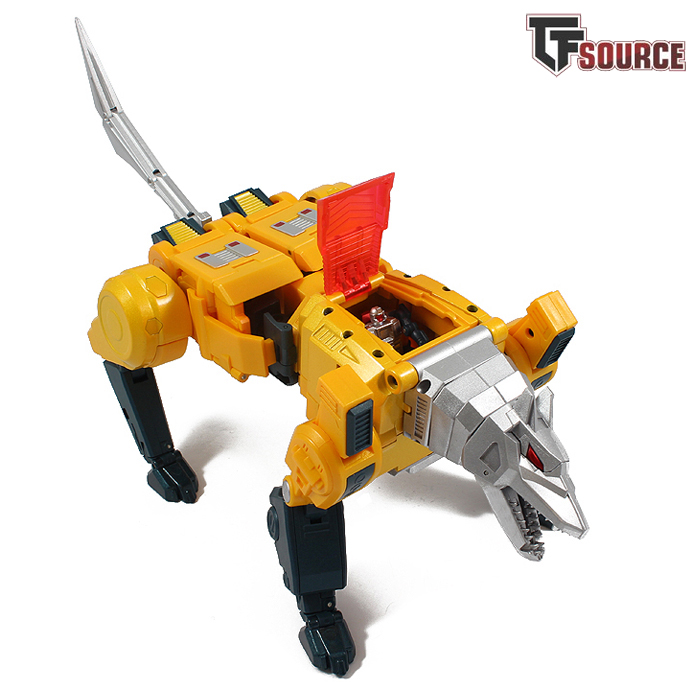 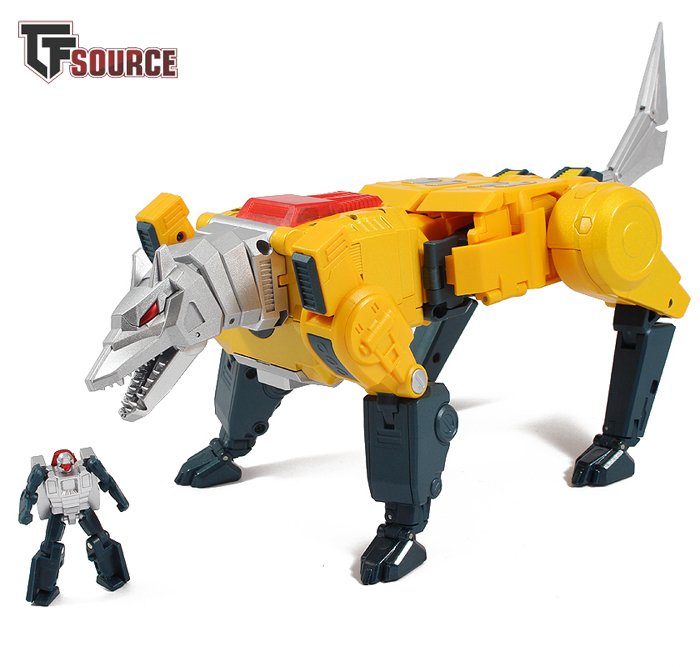 Now let’s talk about looks, because although he is just a box with legs, a sword-tail and a head, he works. The beast head can look up and to the side if you rotate the neck at the second point of articulation closer to the body, this adds to his expressive capabilities. Lupus certainly does ferocity well, and looks properly dangerous. He’s very stable in this mode and the photo at the head of the article shows that he’s expressive enough to portray more than just standard maniacal evil transformer beast. 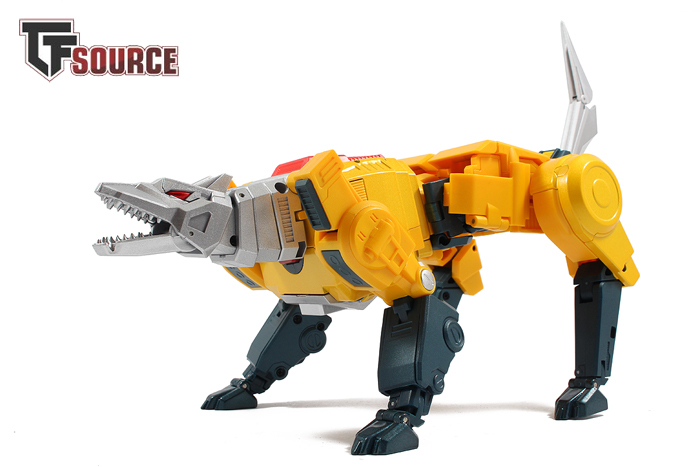 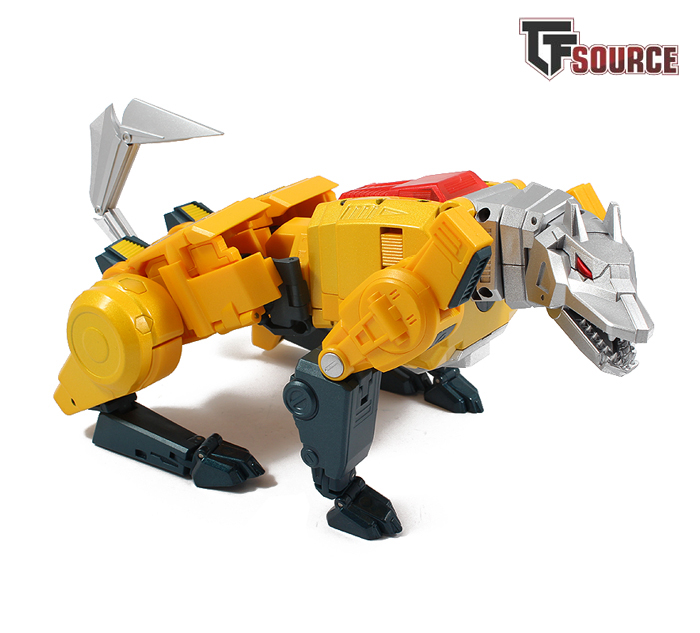 It’s really nice how the tail is articulated in two spots (three if you count the rotation at the sword hilt) as it adds greatly to the posing. The rear paws have a tilt but there’s not a whole lot of outward movement at the hips so they are not fully utilised. The Nebulan can sit inside the cockpit on the back of the beast, and there’s a little steering wheel console that can be lifted up inside to help you slot him in there. The legs on the Headmaster have to be angled very specifically to get him to sit in the right place and allow the flush closing of the cockpit. 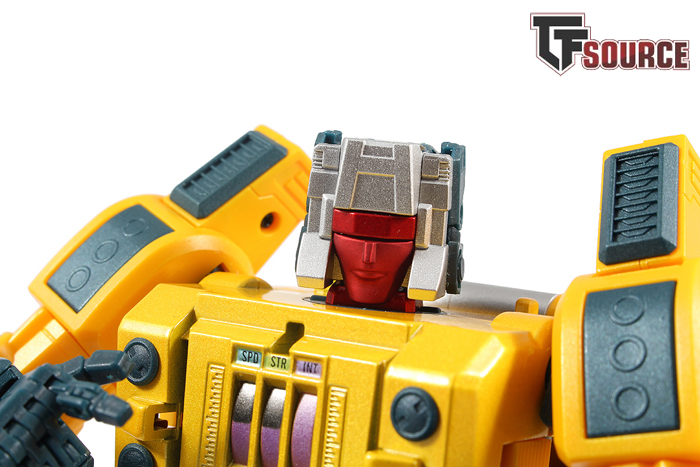 The Headmaster itself is a very toon accurate sculpt, and not quite as beautiful as the Titans Return, Generation 1 or Fansproject sculpts for this character, but it does work with the overall look of Lupus. The sparkly silver on both this and the beast head is quite appealing. The connection of the Headmaster to the body is secure too. 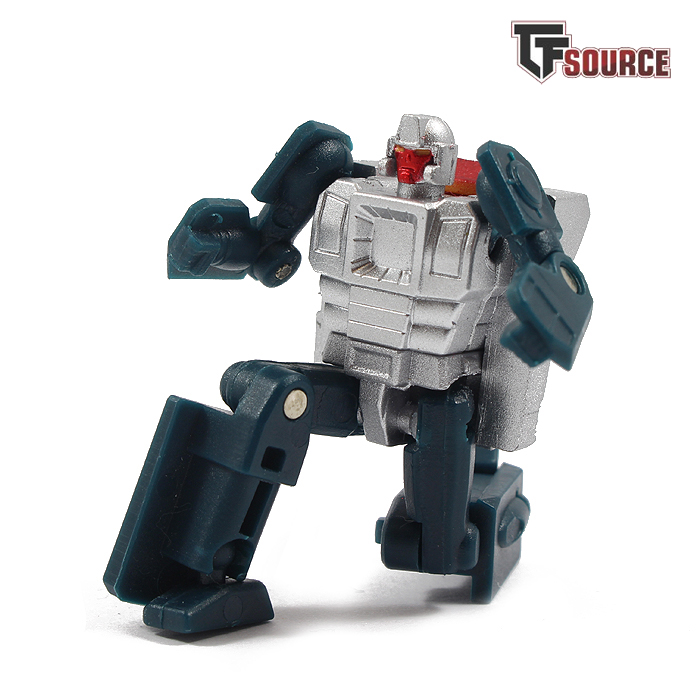 Transforming him is very similar to transforming a G1 Headmaster, the bonus being that the Headmaster actually has better ankle articulation than Lupus himself, and there’s an elbow. All that is awesome, and yet he cannot turn his little head which is quite disappointing. This is one of the better FT headsculpts, that bears mentioning. 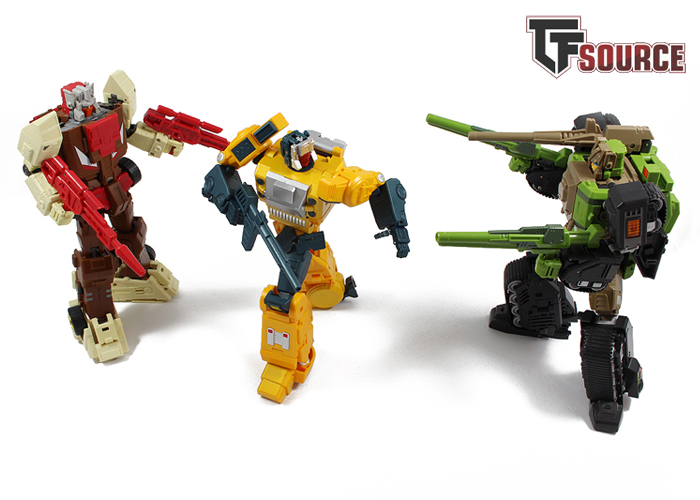 Let’s go back to the very first question asked in this review, why are FansToys making Headmasters, and specifically Lupus? They must have seen a gap that was only being successfully filled by MakeToys. TakaraTomy certainly hadn’t shown any interest in touching Headmasters and Targetmasters, and X-Transbots’ Andras was more a movie thing than a Headmasters thing. Now MakeToys Cupola and Ironwill have done well, they are spoken of generally quite highly but the release schedule is glacial. FT have spotted an opportunity to let collectors fill out 1987 at Masterpiece scale at a faster pace, hence no big name good guy or bad guy, but a character we’ll all eventually need for the display. 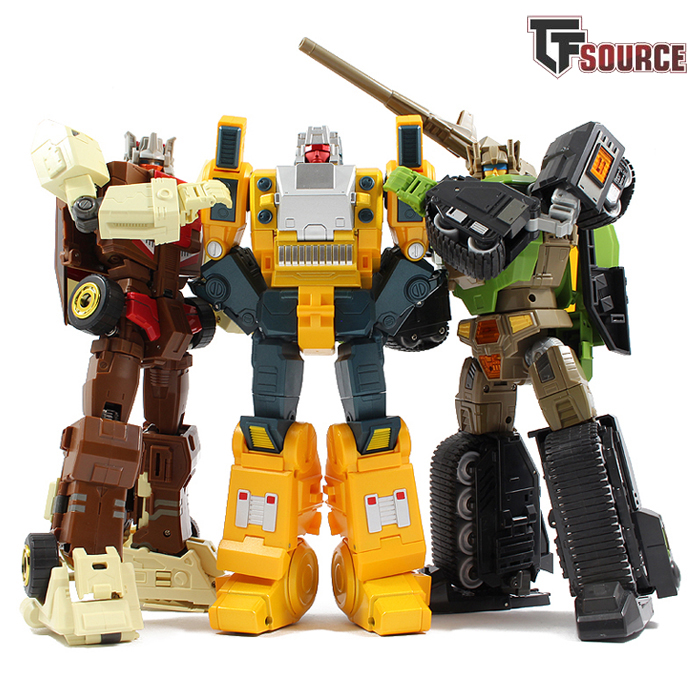 It is also no coincidence that Lupus slips seamlessly into a display with Cupola and Ironwill. He’s less detailed with fewer toy cues, but as a result his robot mode is completely visually uncompromised proportionally. Let us also not forget that FT’s promotional photography of Lupus involved MakeToys Cupola directly, and having shown Lupus decapitating Cupola seems quite symbolic and a statement of intent. FansToys have been doing well enough by pitching their figures at the right scale and leaning heavily on screen interpretations, it’s not doing TakaraTomy any serious harm either. The question is whether or not FT will eventually get around to doing the characters that MakeToys have already aced, or if this is a gap-filler project that will be abandoned once they’ve assisted in the completion of an MP-scale 3rd party Headmasters display. 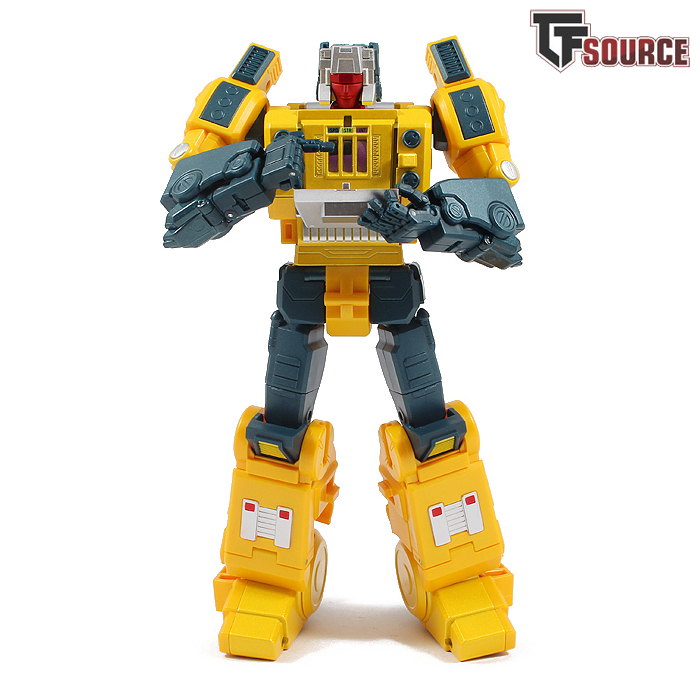 So, then, Lupus. A very straightforward, what-you-see-is-what-you-get figure that does precisely what it says on the tin. There’s no deception here, but there’s also very little depth. You either like the look or you don’t, the character they’ve released either means something to you or it doesn’t. I cannot deny that he is very easy to handle and transform and that nothing feels like it’s going to break, so he’s solid too. Despite the drawbacks and the lack of overall sophistication, I have become attached to Lupus and I do like the toy. I enjoy the robot mode despite its limitations and the beast mode is baffling in its appeal in the face of its simplicity.

Something still tells me that I’ll be more impressed with an eventual MakeToys effort, because I am not sure that just filling the gap with a fully toon-accurate Headmaster that does the least amount expected to pass is what I’m after at this scale. The thing to remember with my judgement, however, is that this is my favourite scale of toy right now, and this is my favourite era of Transformers right now, so I’m bound to be very critical of how well any toy fits into my collection vision. Would I recommend Lupus to you? At $150, it would be a hesitant endorsement, but endorse it I will. What can I say, he grew on me. I just wish there was more ‘wow’, and if Hasbro can wow me with this character at $15, for ten times the price this should have blown me away. 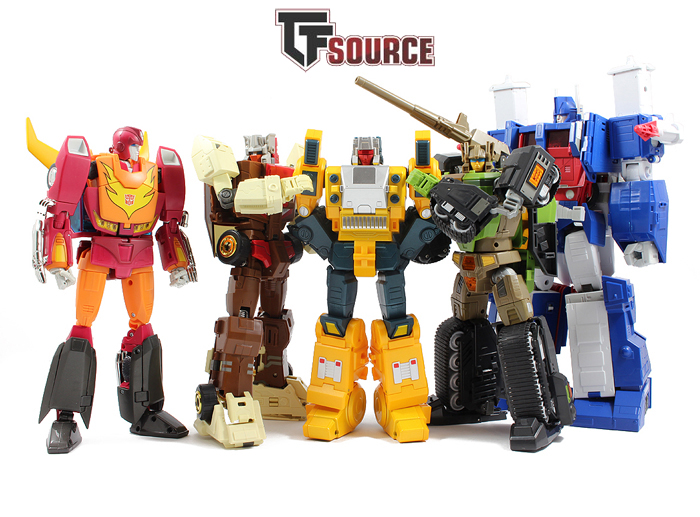