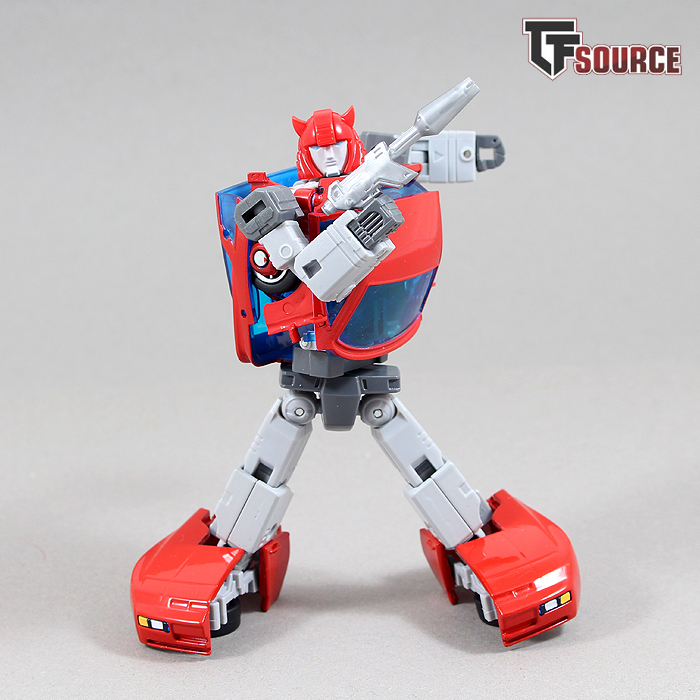 Please welcome ACE Collectibles to the 3rd Party Transformers scene. This company that sent out samples of their Immortal Series red 01 ”Tumbler” and yellow 02 ”Hiccups” to reviewers and photographers, asking them to keep it under wraps until their chosen reveal date, have launched their brand with a very popular and glaring omission at Masterpiece scale and have seemingly modeled Tumbler very closely on MP-21 Masterpiece Bumblebee. Featuring a significant amount of die cast metal and 3 different robot mode heads, let’s see how well this slots into a Masterpiece display. 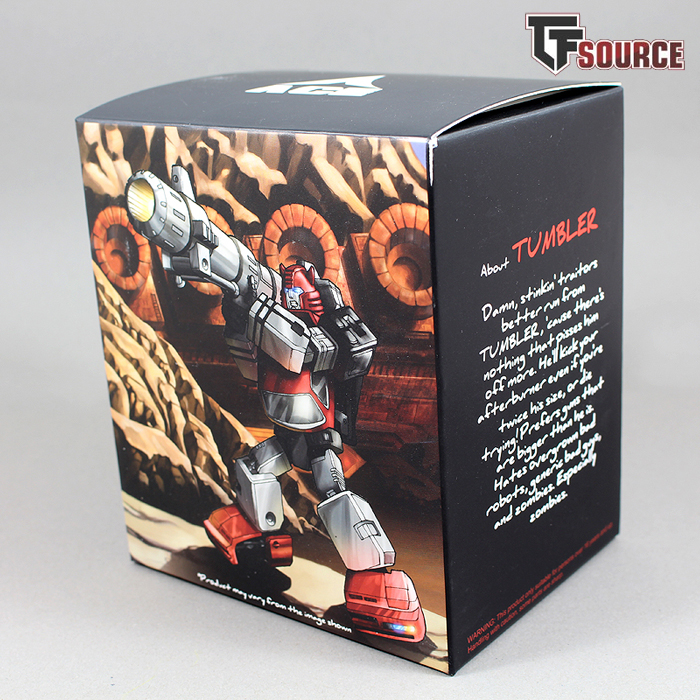 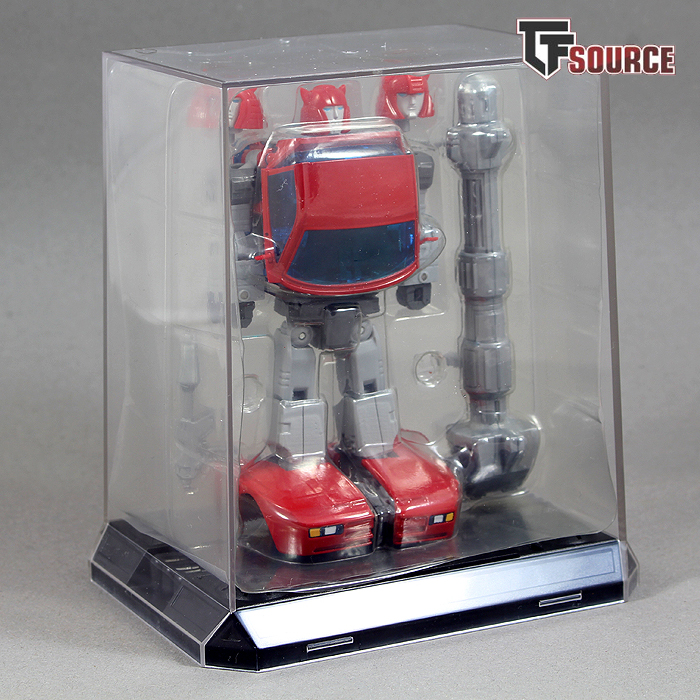 The presentation was a nice surprise and I enjoyed the product reveal that seemed to be a layer-by-layer experience. As a fan of die cast collectible model race cars, the clear plastic display case was a pleasant surprise. The base of the display case comes off and acts as a display stand for the figure. Again, I kinda like that. It’s not as though anyone would have criticised them specifically for only using the plastic clam shell insert. I suppose the cynical among you would be asking whether ACE were compensating for shortcomings elsewhere, but I’ll admit that wasn’t going through my mind the first time I unboxed Tumbler.

You can see the three robot heads, his handgun which bears a strong resemblance to that used with similar Masterpiece figures and the large cannon used by this character in the 1984 cartoon premiere. The instructions allude to an extra piece called “Roscoe” that fits on the end of his arm and looks like a small blaster head/nozzle, but my sample did not come with it. 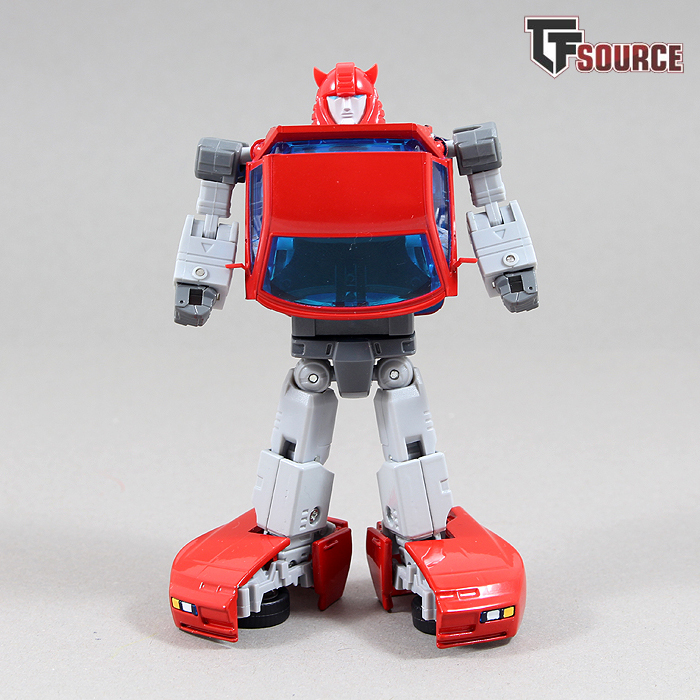 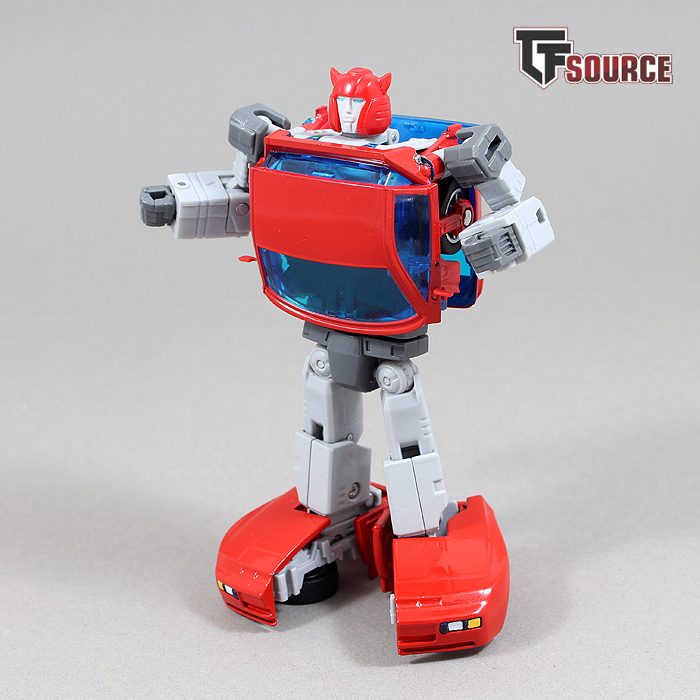 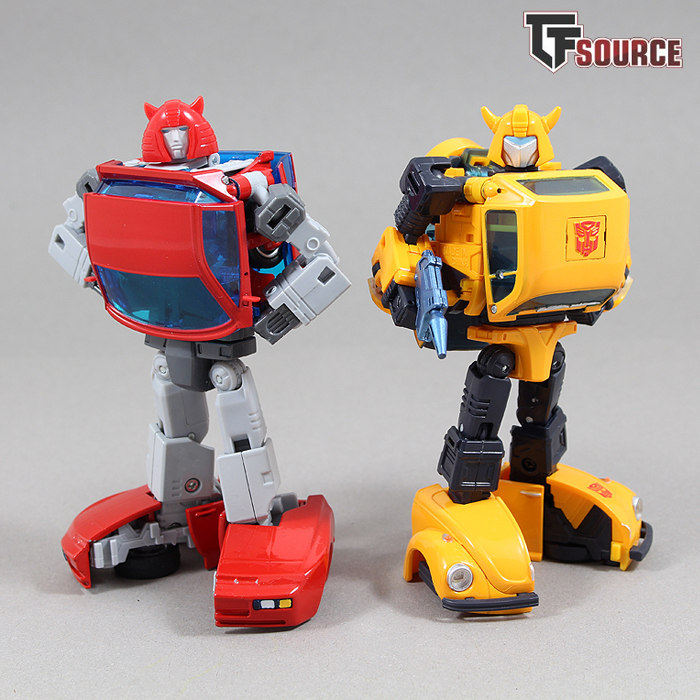 Above I have pictured Tumbler with all three of his head sculpts. I feel the top one evokes a Classics vibe, the middle one probably has the overall shape I’d most prefer on a Masterpiece version of this character and the final head takes the expected characteristics a little to the extreme. The first thing that strikes you on picking up the figure is the weight of the die cast feet, which can flop if not attended to during posing or handling. I love the translucent blue of the windows, it works very well with the shade of red employed.

Standing him next to a representative and relevant Masterpiece Bumblebee shows you just how much they have in common concept-wise. Notice the faux rear window on the chest, the way the car doors wrap around the feet and the general choices made in design from the ball-jointed shoulders and hips down to the folded-under front wheels. 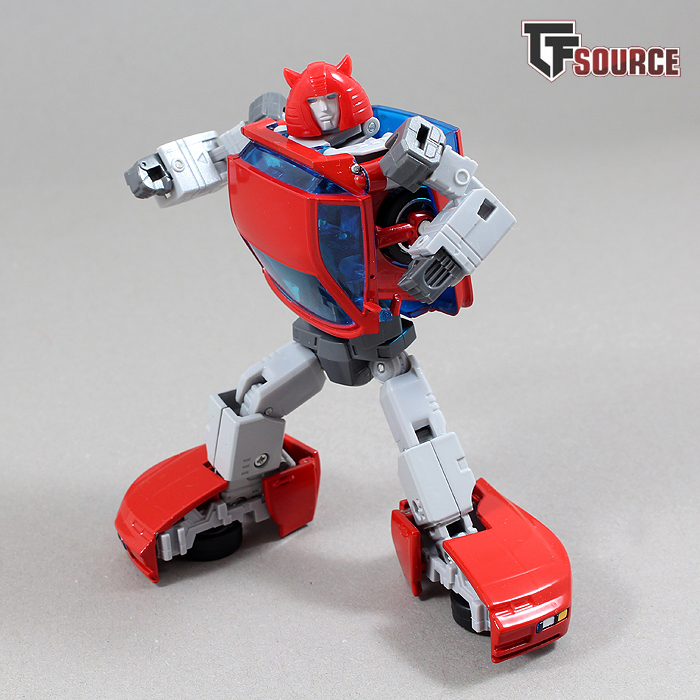 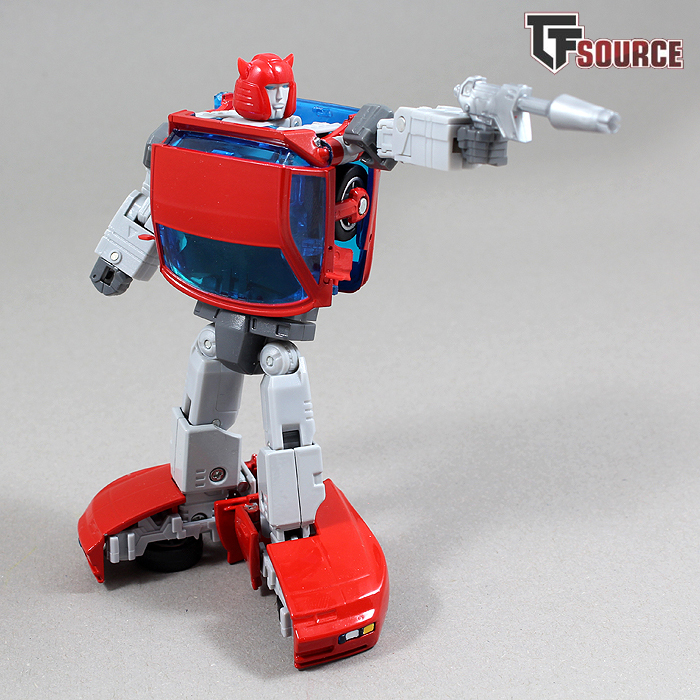 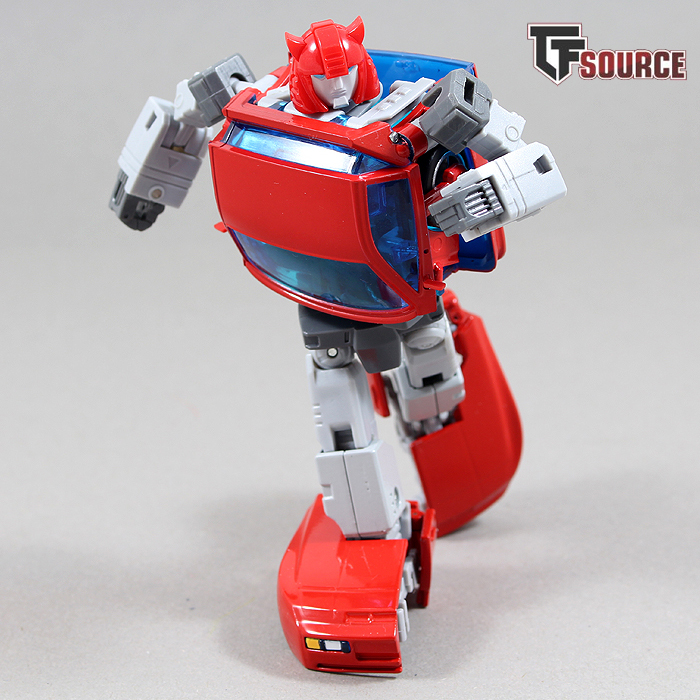 There are visual features that appeal to me here, the main one being how the inside of the rear wheels look once rotated into his chest cavity, that’s very mechanical and ‘Transformers’ to me and I like that it’s highly visible in robot mode. The choice of ball joints and points of articulation mean that expressive poses are possible and Tumbler doesn’t feel dead when displayed. Proportionally, your eyes will be drawn to the short arms and wide chest, though. There’s no getting around it, they’re definitely a thing. I found the gun grip to be quite weak for the smaller blaster. 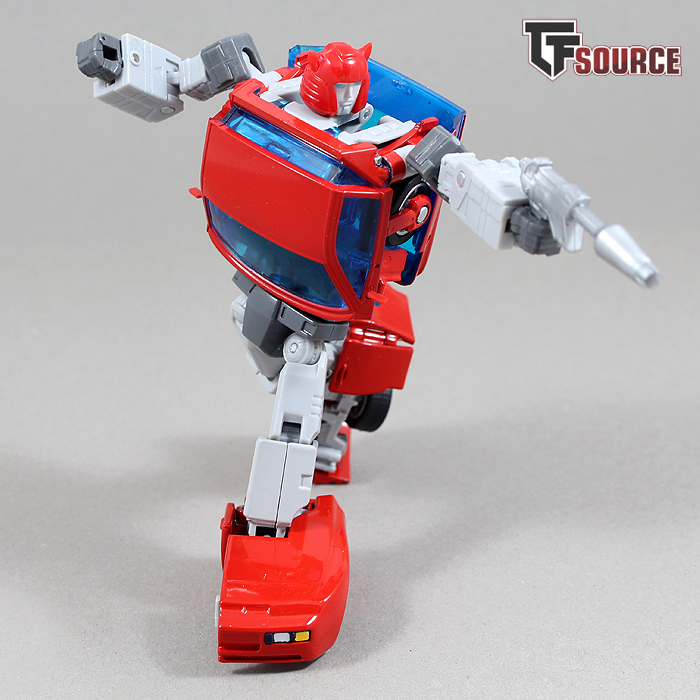 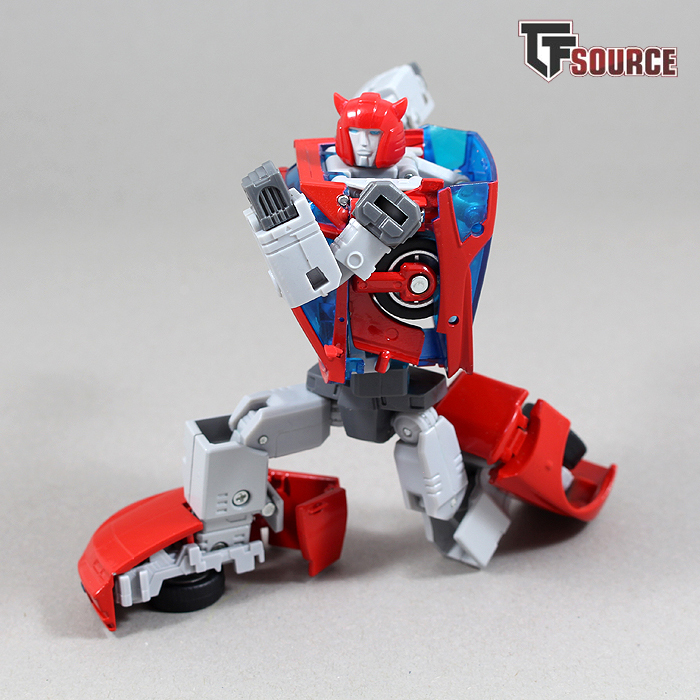 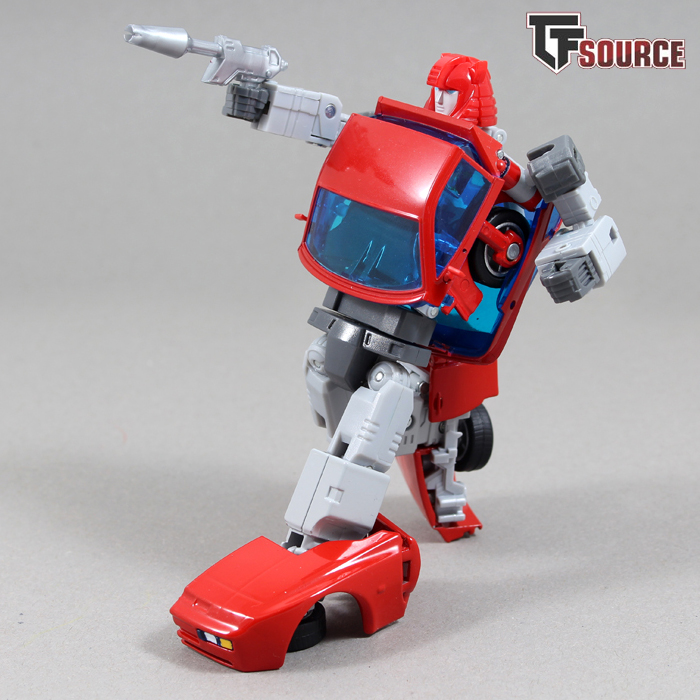 You can see that dynamic and mildly extreme posing is possible, but it needs attention and perseverance. The balance can be tricky to achieve and there is not a very wide range of functional motion in the knees. The kneel I have accomplished in the above photo is not all that natural-looking because of the way the knee cap sits (or rather does not sit) in the lower shin section. I have since discovered that with a bit of force, the knee cap will sit in the cavity and look more like a natural knee bend. That section feels like it should be double-jointed, but the second joint is much lower down and is the one most likely to bend, so what ends up happening is you try to bend the knee and the upper leg comes away from the lower leg, leaving the gap you see above. Like I say, this can be remedied with force and making sure the knee bends at the upper joint. You can also see that the wrap-around front doors can come un-pegged from the feet easily. I am told that improvements have already been implemented for the final product, that despite the colour box this is genuinely meant to be accepted as a test shot. I am not aware of the precise nature of the improvements, though. 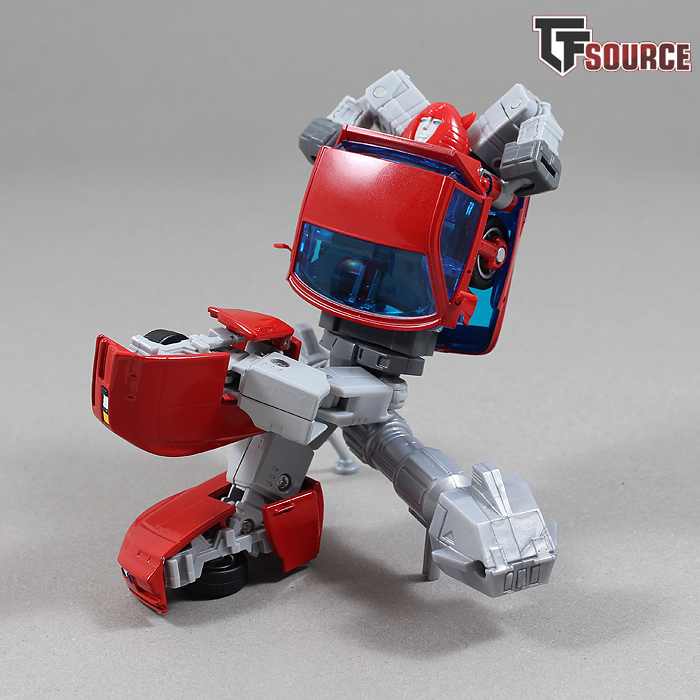 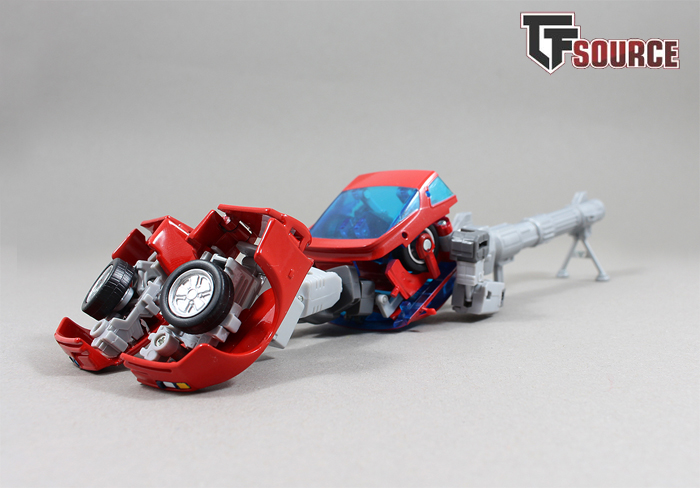 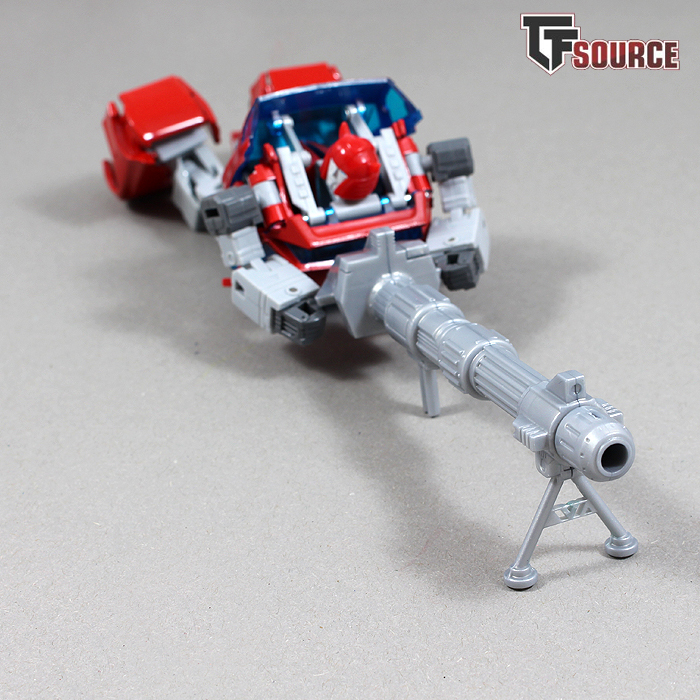 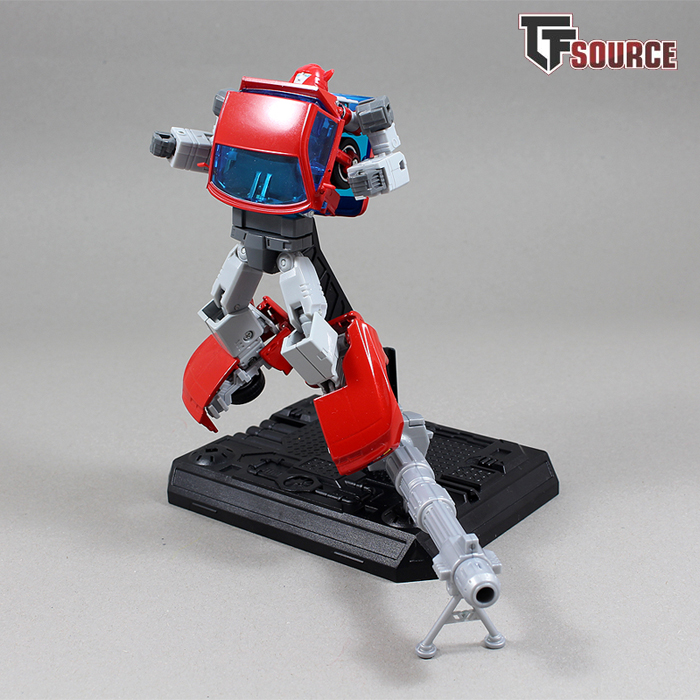 The display stand is a nice (and probably unnecessary) inclusion, but due to the looseness in this test shot’s feet and thigh joints, occasionally it can be hard for Tumbler to hold a super-dynamic airborne pose while on the stand. The main attachment of the stand, like MP-3/11, can be oriented vertically or horizontally. I do like the massive cartoon-themed cannon Tumbler comes with; the toy is certainly expressive enough to pull off convincing sniping poses. He can even sit on it! However, the arms do not have the length or range of movement to allow him to hold it as he does on the box artwork. The box art also shows the cannon being held by Tumbler while standing, and the front legs of the cannon are folded up. I tried this on the toy and got stress marks with no movement. Learn from my stupidity. If you fit the appropriate batteries (2x AG3/LR41) into the cannon, the LED at the end of it will light up, and there is a switch underneath. 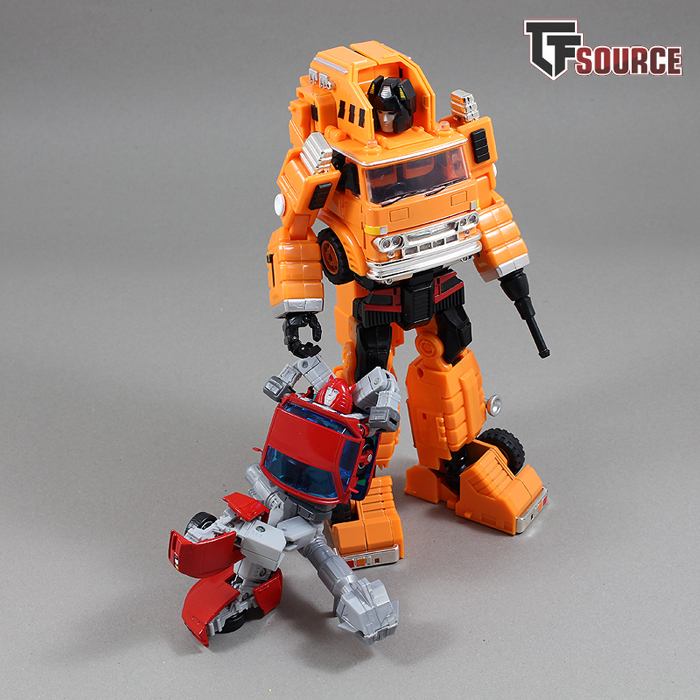 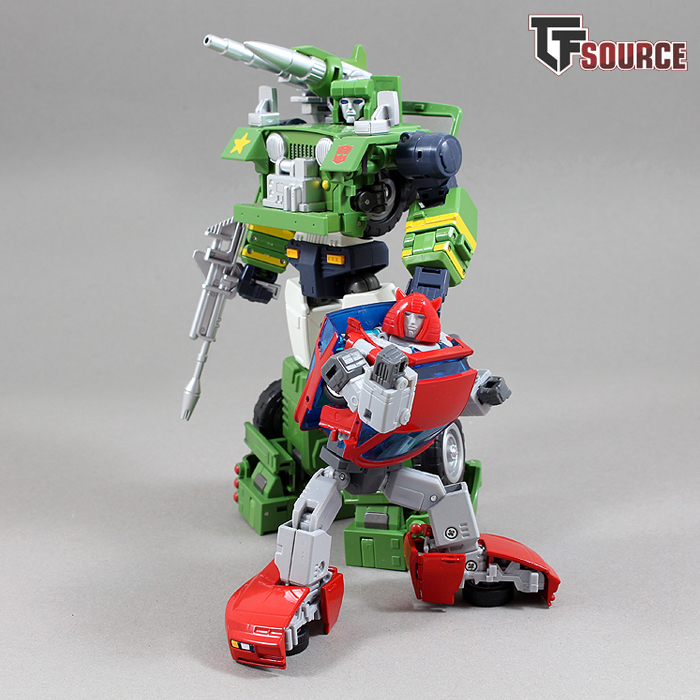 In terms of size in robot mode, Tumbler does work with Masterpiece scaled figures. As a Generation 1 toy, thanks to his pre-Transformers and pre-Micro Change Series origins, the look of this character was always ‘super-deformed’ as they say. The proportions of the vehicle mode while based on a Porsche 924 Turbo, were not representative of a real life car. ACE Collectibles have fallen on the real life proportions side of the debate for how this character should be represented in vehicle mode as a Masterpiece-scale figure. This has resulted in feet that seem just a shade too long for his body and the above picture probably demonstrates this the most clearly. Interestingly, the faux spoiler at the top of his chest evokes the super-deformed look. 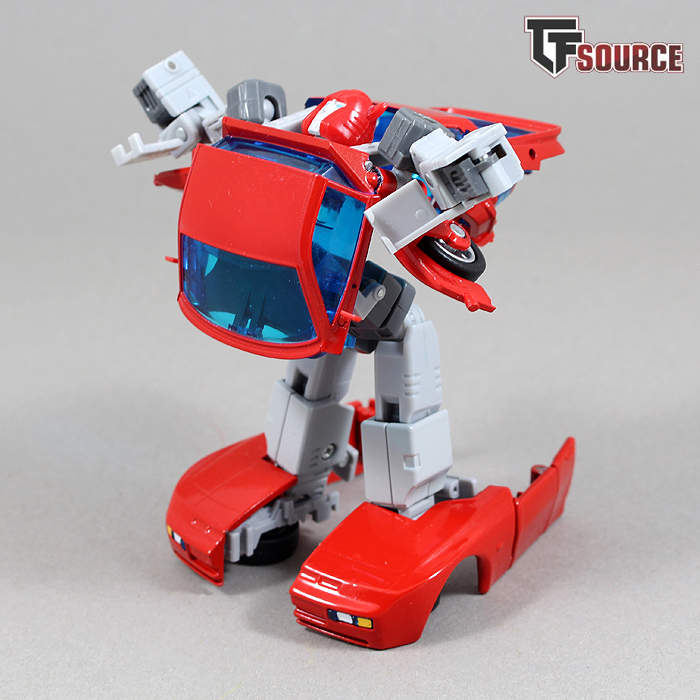 For those with MP Bumblebee experience, much of Tumbler’s transformation will be predictable. Unlike Bumblebee, though, there are sections of Tumbler that do not have the clearly defined final position, such as how his rear lights fold up and sit inside the chest cavity. On the MP Bee, the rear of the car has a very defined transformation and resting place overall. Similarly, Tumbler’s doors do not peg into the legs before becoming part of the integrated car chassis, but this does not affect the vehicle mode at all. In fact, I find the vehicle mode very well secured and held together. Tumbler’s arms do fold up under the rear of the car, but they don’t peg onto anything, again no 100% clearly defined configuration or final position was obvious to me. Tumbler does the same belly/hood trick that MP Bee does, just a little bit less elegantly. 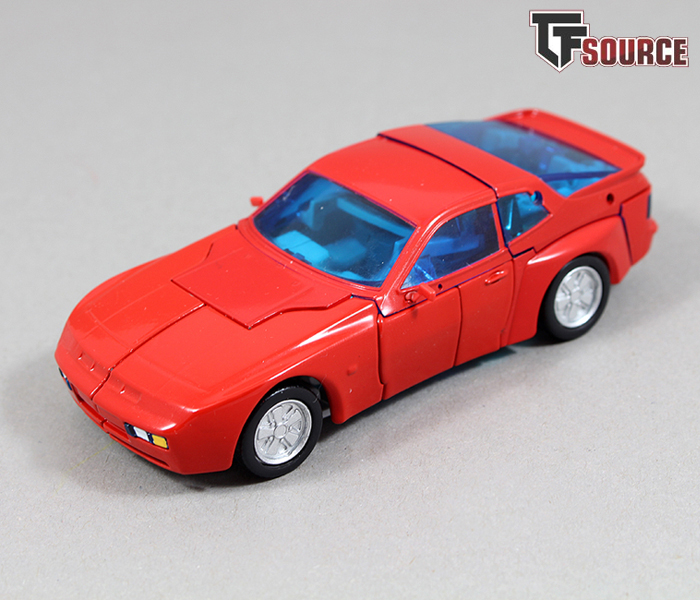 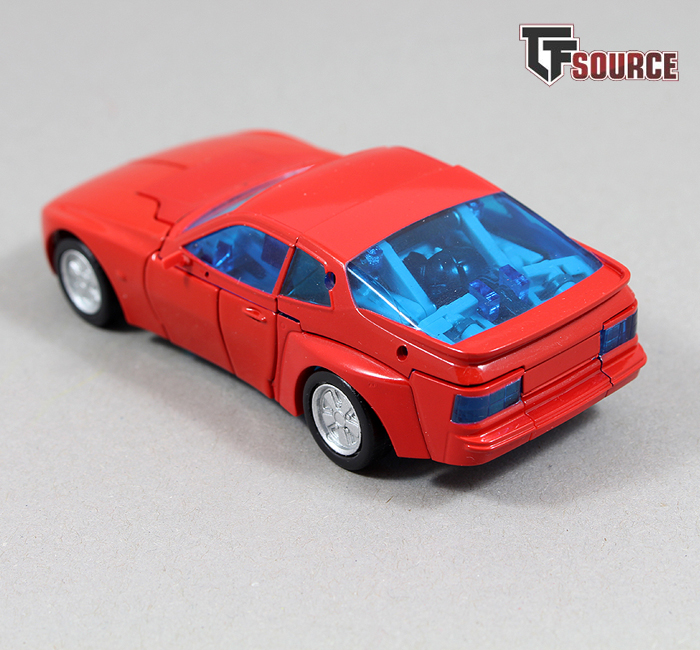 At no point in the transformation did I feel anything was going to break, stress or get permanently damaged, and that is very admirable for a first effort, so I am grateful for that. It’s a very quick and straightforward conversion too, one of those that you can do while keeping one eye on the TV or carrying a conversation. The only drawbacks of it for me are a slight lack of elegance in the way things are designed to peg in or fold away, and the die cast being a touch cumbersome. But peg it does, and the result is a quite tidy and fun vehicle mode, immediately recognisable as the Porsche 924 Turbo it’s trying to reference. 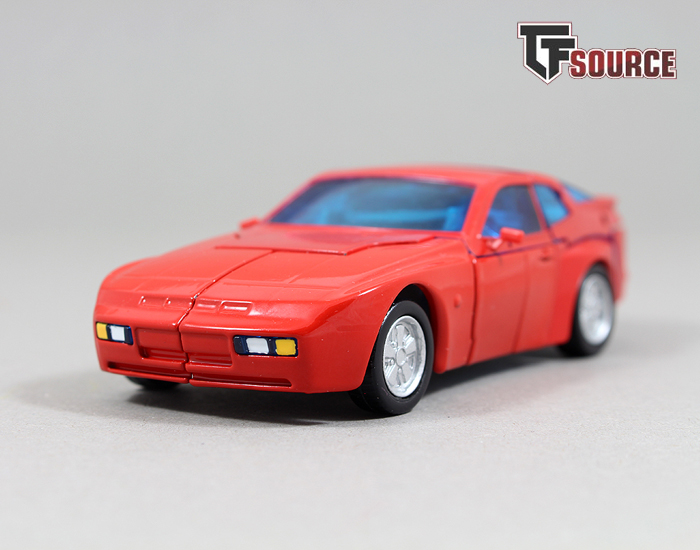 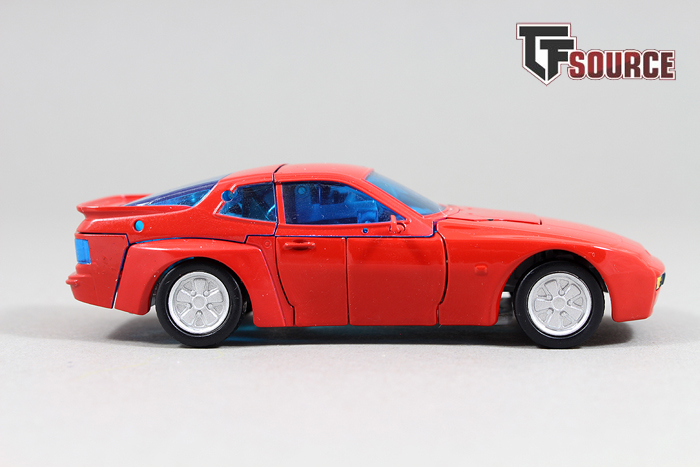 I do feel the blue translucent plastic comes into its own here, but in a way that effect creates a further departure from the Masterpiece vibe that ACE might have been going for. The tyres are rubber and the wing mirrors are rubbery, which is a good thing as I found myself inadvertently bending them during handling quite a lot. That’s the kind of thing that would snap off on other 3P figures. The die cast heft of the vehicle mode really puts me in mind of the small Matchbox or Corgi toy cars I used to have as a child, this thing begs to be rolled along the tiles on the floor every time I pick it up. It rolls great, by the way. There’s paint on the front bumper and headlights, but it is sloppily applied. There is good panel alignment and secure fitting of said panels in this mode, so no qualms there. 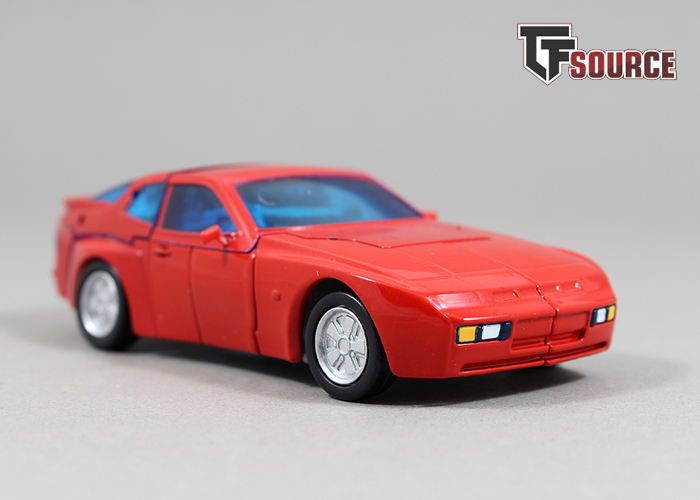 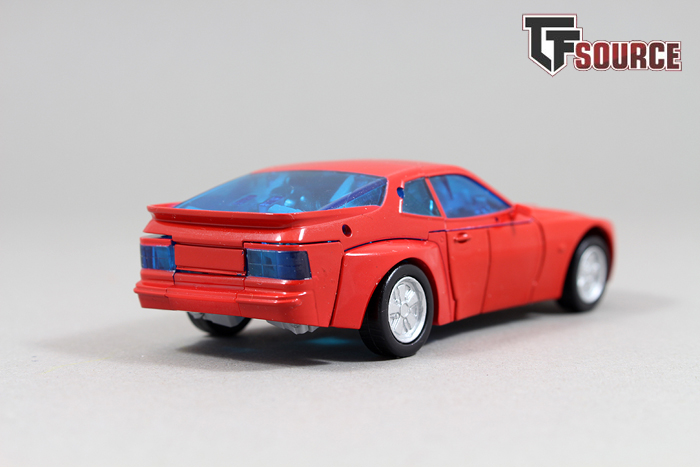 Overall what you have here is a good toy that transforms easily, is a solid pick-up-and-play figure that does have an appreciable vibe of the character that inspired it originally. You have real life vehicle referencing that’s not far off at all, and in robot mode you have fair posability but not exceptional. I look forward to seeing a final production copy that hopefully eliminates some of the looseness in the waist and feet and improves gun grip. Tumbler does some nice things, I like that there are no hollow spaces in the forearms, instead there are flaps to hide the hands inside. There are also no seam lines on the chest as he is not packing a flip-panel as MP-21 does. The face sculpt needs more definition, though. The proportions are set now, so a lot of people are going to have already made their purchase decision based on reviewer photography and the $75 price tag. Something that Tumbler has helped me realise is that I definitely want an eventual official Masterpiece figure of this toy to have the super-deformed cartoon and Generation 1 toy look in vehicle mode, and the subsequent proportions that will afford it in robot mode. So for me, ACE Tumbler is a promising start for this outfit, but it’s not the MP I’m after for my collection. 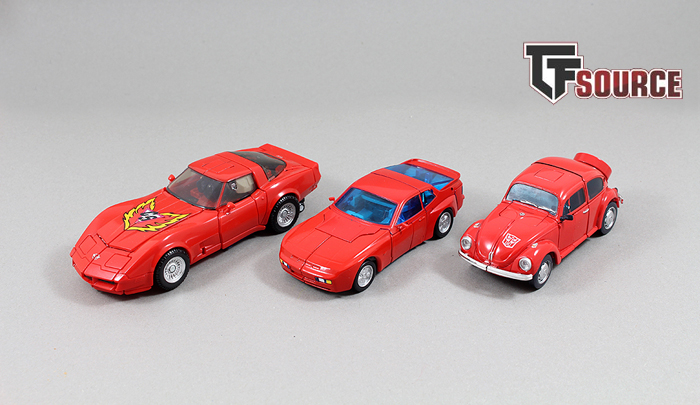