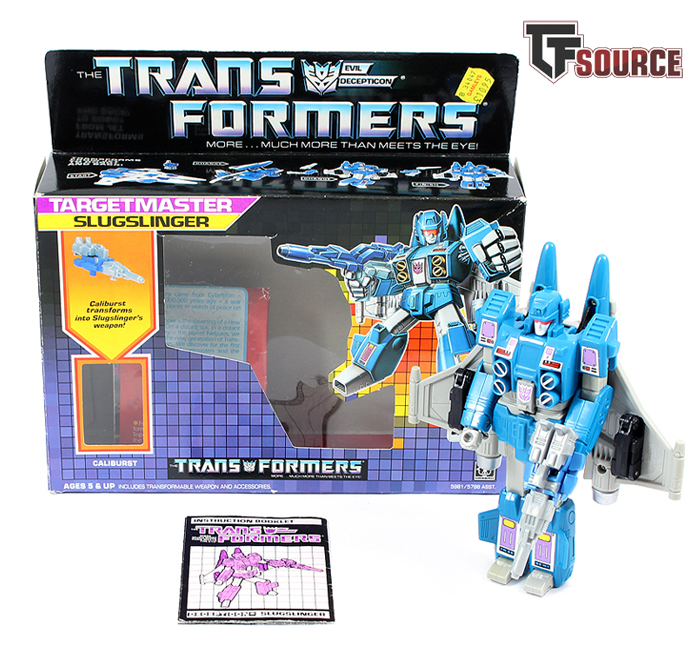 I spent most of my adult toy collecting life focusing on series 1 and 2 of Transformers, as well as Pre-Transformers and all of their global variants. A year and a half ago I started to collect vintage TFs again and focused heavily on post-Movie Headmasters, Powermasters and Targetmasters. Since the first lot of those I bought were in such beautiful condition, it set the standard for every other vintage figure I collected subsequently. That is, no discolouration, totally complete, box and paperwork present and top quality vintage stickers applied. Now, used Generation 1 Transformers from 1987 and 1988 are plentiful, but in the condition required for sample photography worthy of a resource guide like the Generations books, some of those figures can be even tougher to locate than sealed specimens! 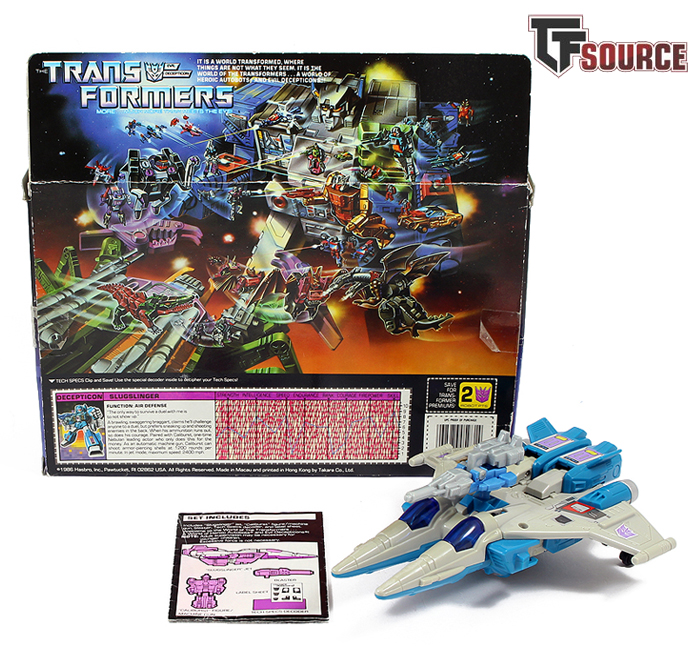 One of those toys that’s almost impossible to find without discolouration, perfect stickers, perfect chrome/paint, complete and unworn is 1987 Decepticon Targetmaster Slugslinger and his Nebulan partner Caliburst. Slugslinger was a brand new Decepticon jet for 1987 whose toy was exclusively sold as one of the new range of Targetmasters that debuted in the 3-part Rebirth cartoon.  The toy was available in Europe, North America and Japan. To be fair, as far as vintage Transformers go, Slugslinger more often than not comes with good stickers as they are very few in number (tiny stickersheet) and are not found in locations where rubbing or friction occurs during handling or transformation. 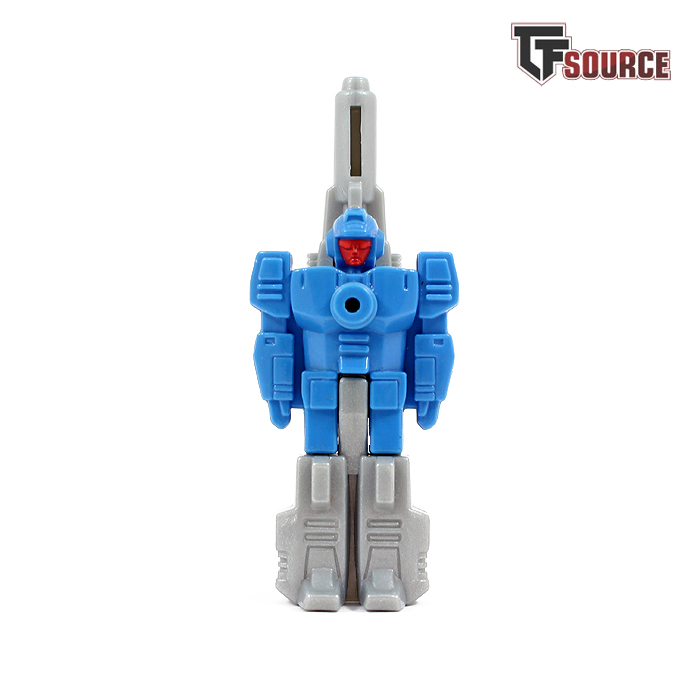 The biggest problems with this toy are undoubtedly the mass of light grey plastic that is yellowed 99% of the time (even visible on MISB graded specimens) or the broken clips on the Targetmaster partner’s waist – a common issue for the three 1987 Decepticon Targetmaster jet partners. Replacement Targetmaster partners can run to very high amounts, and some collectors (ahem) have been known to buy multiple Calibursts to make sure they never have to transform the thing again, such is the flaw with his design that almost always leads to irreparable damage. 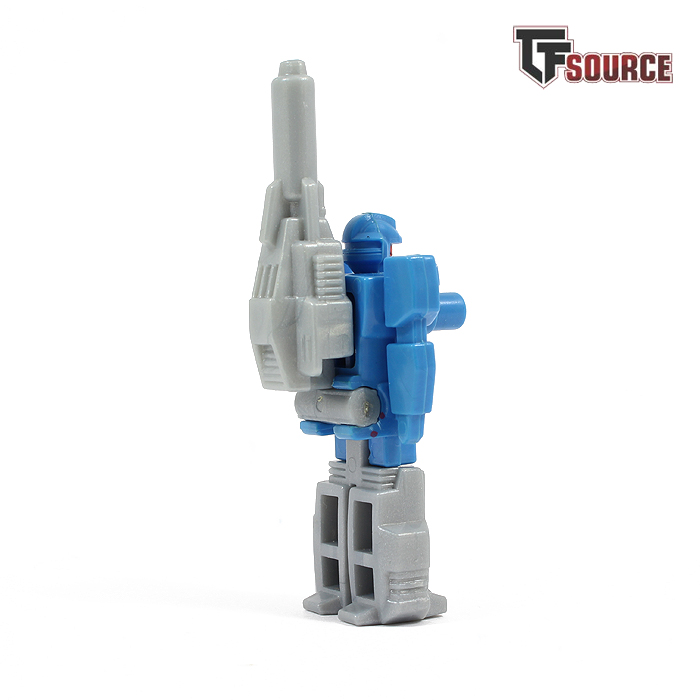 With the discolouration on Slugslinger, it’s so commonplace that often you cannot even tell a specimen is yellowed until it is either in daylight, under daylight bulbs in a photographic studio or light tent or alongside a less-discoloured example. I have bought Slugslingers online and in person that looked perfect, were described as perfect, only to find them discoloured when compared with another or placed under good lighting. Just unscrew the nosecone halves and look at the plastic inside the figure to see how it ought to look! 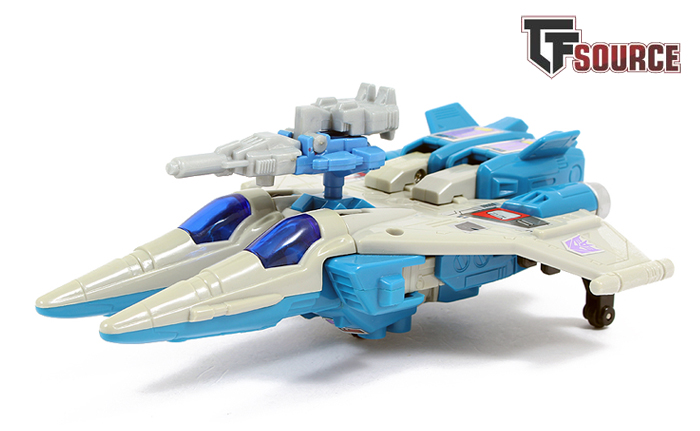 The other issue that crops up regularly with Slugslinger is the chrome effect paint on the 4 circular chest nubs. Hasbro specimens have silver paint there, Takara specimens have gold paint. Hasbro specimens can come out the factory with worn chrome on those nubs, this has been seen with otherwise unused and excellent examples of the toy. Takara versions seem to have much better paint coverage out the factory and as a result I see more examples that have retained the chrome on the nubs, vastly improving the look of a Slugslinger specimen. 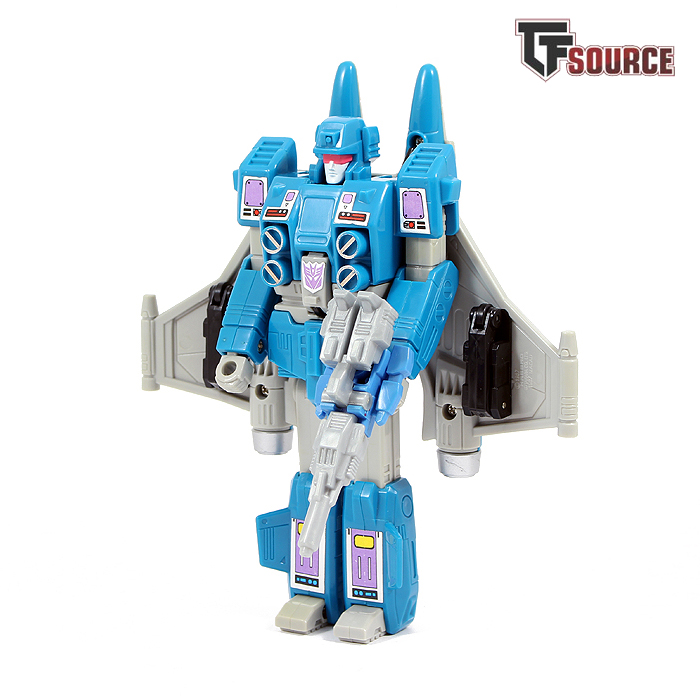 So why bother? Why not just be satisfied with a figure that is a little discoloured but looks great on display, has the Targetmaster and good stickers with chrome that is acceptable for a 30 year-old toy? It’s because of how gorgeous Slugslinger is, and how much I love it. It’s a late discovery for me, one of many toys I have fallen in love with recently due to my post-Movie vintage focus. Grotusque, Getaway, Slapdash, Doubledealer, Pointblank, Needlenose and Triggerhappy are other such discoveries for me. Having such good examples of Misfire and Triggerhappy means that my Slugslinger has to be reference book quality as well. Finding out that the Takara version had different chrome on the chest just added more desire and intrigue to my pursuit of perfect loose, used specimens. I was even more shocked to find that there is seemingly a colour variant on the blue Caliburst plastic between Hasbro and Takara Slugslingers too, the Takara one having a darker shade. That may just be down to when it was released, though, as I have since seen the same variation on Triggerhappy’s Blowpipe Nebulan. 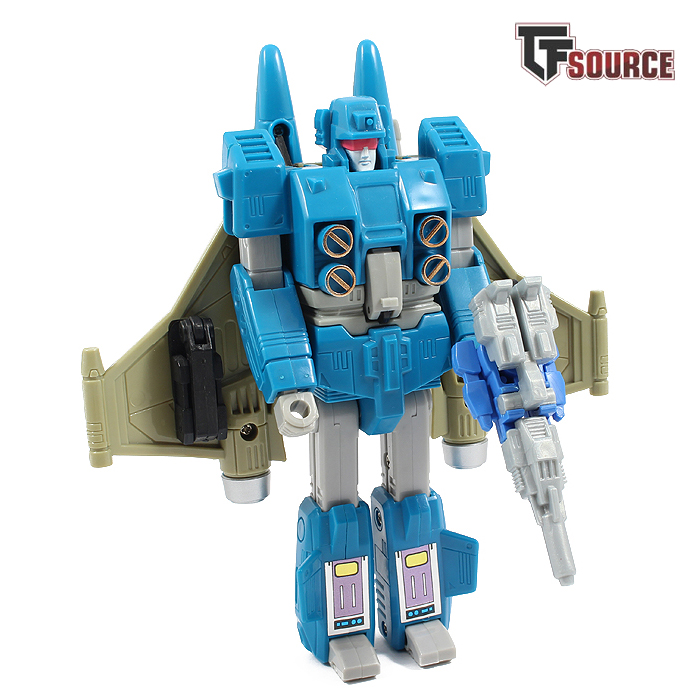 I have accepted the possibility that I may need to buy unused specimens and apply vintage stickersheets to get the look and display pieces I am after. It’s the vision I have for my collection; totally authentic, complete and perfect G1 Transformers that look and display the way their designers intended, stickers applied and all. With Slugslinger being that unforgettable double-cockpit jet, having one of the finest G1 headsculpts around and a very accessible transformation, it just adds to that desire for a perfect one to pay appropriate tribute. 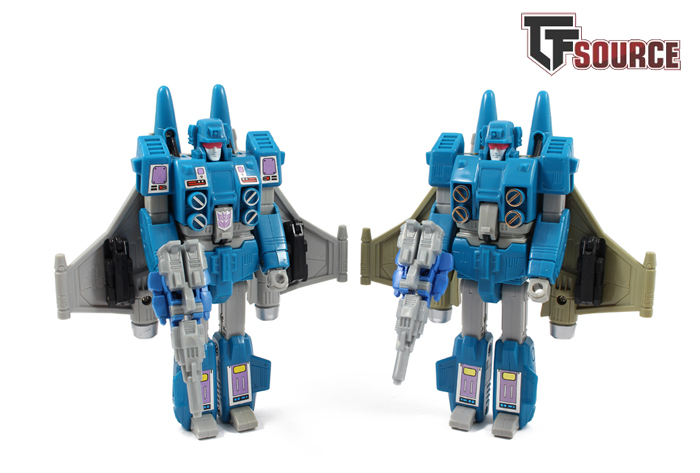 So, I had managed to snag a UK boxed Slugslinger and Caliburst in fantastic loose shape with superb stickers and very good chest chrome, but half of one foot was yellowed and the nosecones and wingpack were slightly discoloured too. Since you cannot replace feet on Slugslinger without damaging one of the factory stickers, Frankenstiening was a non-starter. I won’t use reproduction labels for my personal collection or this project either. Two loose Hasbro Slugslingers later and I still couldn’t nail a better condition one. Then came the Takara ones, including a very nice complete one with amazing (gold) chest chrome, excellent condition Caliburst, but a heavily discoloured wingpack. Now, the wingpack is replaceable without damaging any factory or applied stickers. Astonishingly, I found another Takara Slugslinger on eBay UK (both of them came from the UK actually!) which was totally unyellowed…that in itself was a huge event. Once I got it in hand, I realised the stickers were worn (factory ones, sadly) and it had nicks and scratches across the body, so it too did not measure up. I did, however, pinch the nosecones for the Hasbro one and the wingpack for my Takara one. 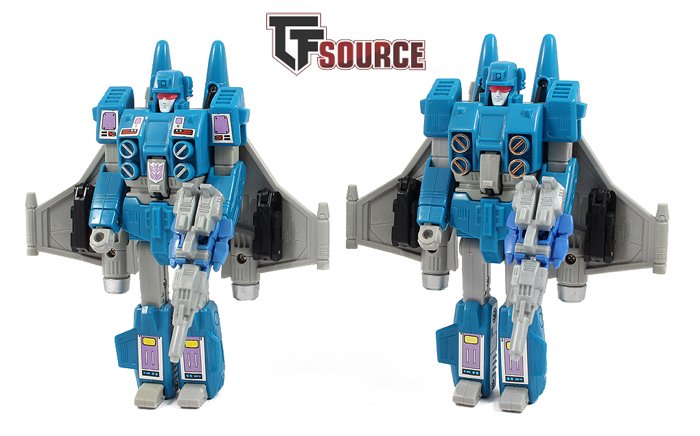 Currently, the situation is that my Hasbro Slugslinger (left) has an excellent Caliburst, excellent stickers, very good chrome, and discolouration on one foot half and on the wingpack. My Takara Slugslinger (right) has an excellent Caliburst, good factory stickers, no applied stickers, excellent gold chest chrome and a few nicks and scratches on an otherwise perfect un-yellowed wingpack. I cannot really do much more without finding even better specimens, and odds are if they have better plastic colour and stickers, they’re probably worth replacing my current examples with completely, and not just in part. As far as stickers were concerned for my Takara example, that was something I could improve.

Unused vintage stickersheets are a funny old thing, especially for characters like Slugslinger that rarely find themselves at the top of a wanted list. Specialist collectors will know how difficult it is to find perfect specimens, and when putting together MIB unused examples, they will come to appreciate the hassle of finding and affording unused G1 paperwork for later year toys that were not bought in the same quantity as an Optimus Prime, Megatron, Jetfire or Starscream. The good thing, however, is that for a lower-tier character like Slugslinger, there is little incentive for people to try and produce reproduction stickers that can fool collectors. How much of a market would there be for that sheet? Despite that, and having seen G1 stickersheets reproduced in the vintage format, the unused Slugslinger sheet I got from Italy made me question its authenticity. There was no solid online resource that I could query either to check its vintage credentials. I must admit that reproduction Diaclone stickersheets and instruction sheets sold in Italy had given me cause for concern.

I compared the feel of the stickersheet and its print quality with my G1 Grotusque, Apeface and Slapdash stickersheets, and the same slippery feeling of the sticker foil was present. Comparing the Slugslinger stickersheet to applied stickers on my Slugslinger toys turned up a few differences, though. The purple of the Decepticon labels, and generally all of the colours were lighter. That could be the result of discolouration or even a different print run to the one on my Slugslinger toy in question. Let’s not forget it might have been from a 90s Chinese issue Slugslinger too, not necessarily a 1987 run. 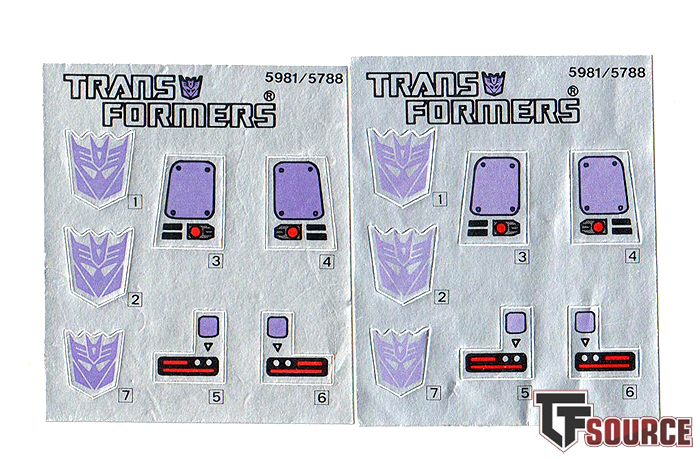 A week or two later, as chance would have it, I managed to score a UK Slugslinger stickersheet (left) from a source with more provenance and I compared the two sheets with each other. There were differences, like the shape of the sheet itself (not unusual for there to be variance here), the depth of the sticker cut (UK sheet did not have the sticker outlines visible from the back of the sheet like the Italian-bought one) and the colours used on the stickers (UK sheet was darker, more like those found on my loose specimens). After asking Paul Hitchens from the Spacebridge – a very long time G1 dealer – to check both sheets, we came to the conclusion that both sheets were authentic, and probably just from different runs. The differences between them were not out of the ordinary for an intra-release piece of paperwork.

Without a doubt, one of these Slugslinger stickersheets will find itself applied to my bare Takara specimen, I am just hesitant to do so before I find an example as close to perfect as I can manage. I know purist G1 collectors wince at the thought of applied stickers and one less unused vintage stickersheet in circulation, I myself would have been the same before last year. However, this is a project with meaning for me, and it’s not without its merits. There are more unused, sealed and worn samples of G1 Slugslinger around than loose, stickers applied ones with zero wear. The same goes for Apeface, Landfill, Darkwing, Triggerhappy etc. 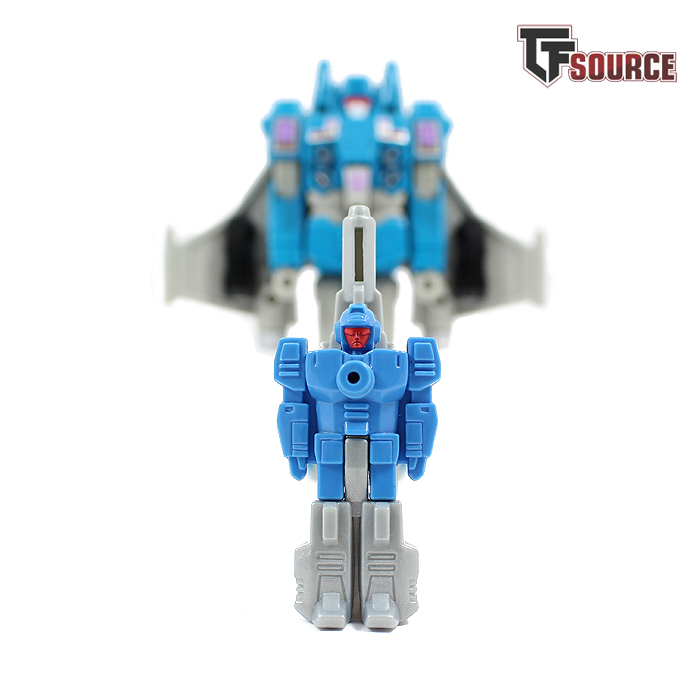 There is this patch of G1 post-movie releases that are bloody impossible to find loose or used with exceptionally good stickers, properly applied and without wear on a figure with no paint or chrome wear, excessive looseness or discolouration. This is not just about playing with toys and putting stickers on for the hell of it, there are reissues for that kind of experience. This is about having vintage G1 Transformers, using totally vintage-sourced accessories and paperwork, to recreate how they were intended to look upon purchase and upon release. I would appreciate a resource like that, where other figures can be measured against perfect specimens, and it shouldn’t just be stock photography or a sealed toy. A well known vintage MISB collector/grader/dealer has gifted me a really tough sealed 1988 figure for precisely this purpose, because he believes in the cause and sees it as a valuable pursuit. The task of historical preservation and documentation of G1 Transformers is not restricted to maintaining and finding MISB specimens, there’s more to it than that. My Slugslinger quest is a very difficult and occasionally expensive one, but I have already learned of more variants, learned more about how to verify vintage stickersheets and the end result will comprehensively be worth it. What would vintage Transformers collecting be without a project, a mission, a quest, a grail or a purpose? Over. That’s what.