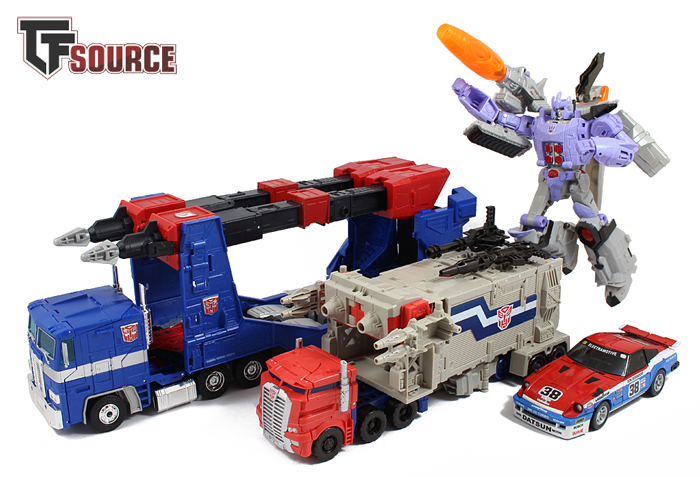 First impressions are everything, or so the saying goes. Is it different for Transformers toys? We can occasionally find ourselves the victims of hype, influence and enabling. The enthusiasm of a friend, a group or the fandom generally can rub off on us and we may buy things we initially didn’t want to. So, it helps to see Transformers toys in hand, in the flesh, before making a decision. As part of an active and ever-growing group of local Transformers enthusiasts in London, we bring new Transformers to pub meets and fascinate/horrify the other patrons with our tables full of robots. This is a great way for collectors to experience figures and make more informed buying decisions. However, occasionally the experience of exploring a new toy while in a large group of people, in dimly lit surroundings and in a social environment may result in an inaccurate assessment. Sometimes, just coming back to a toy after a period of time, or after some modifications, can make a big difference. This week I look at my experience with a select group of Transformers where the second time around has yielded a much more favourable response. 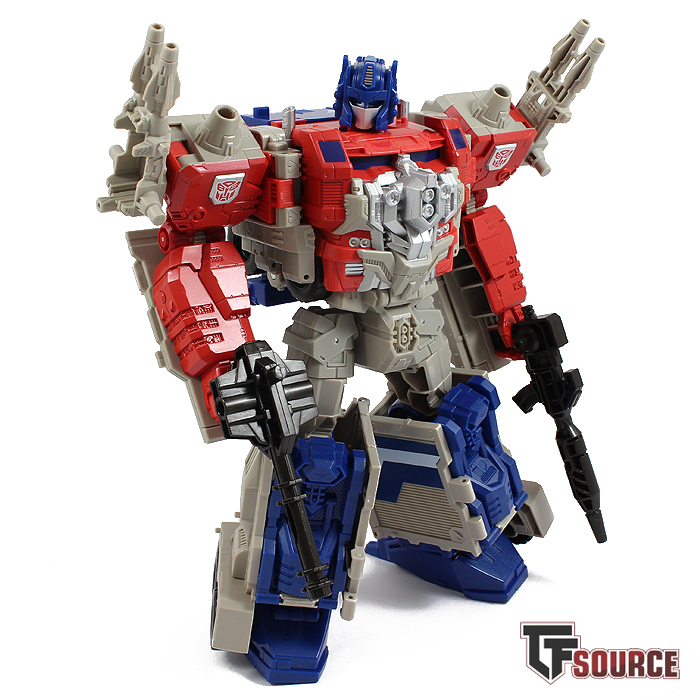 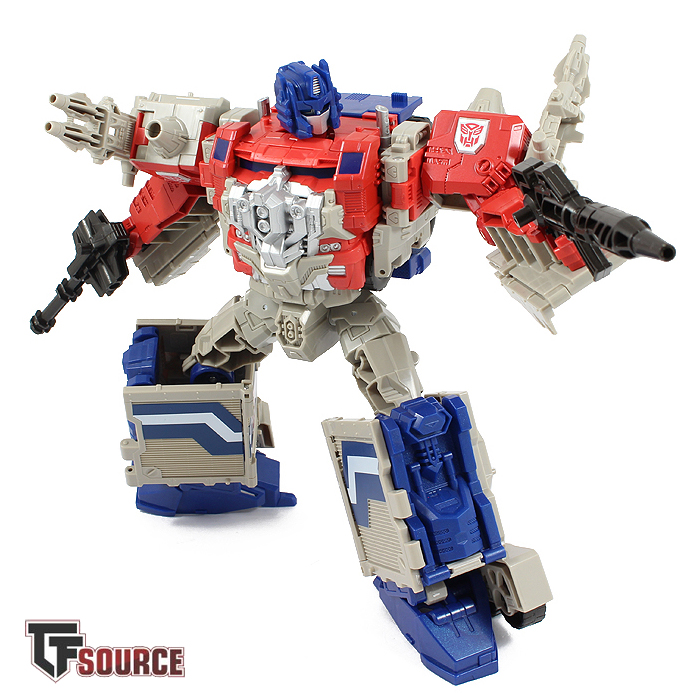 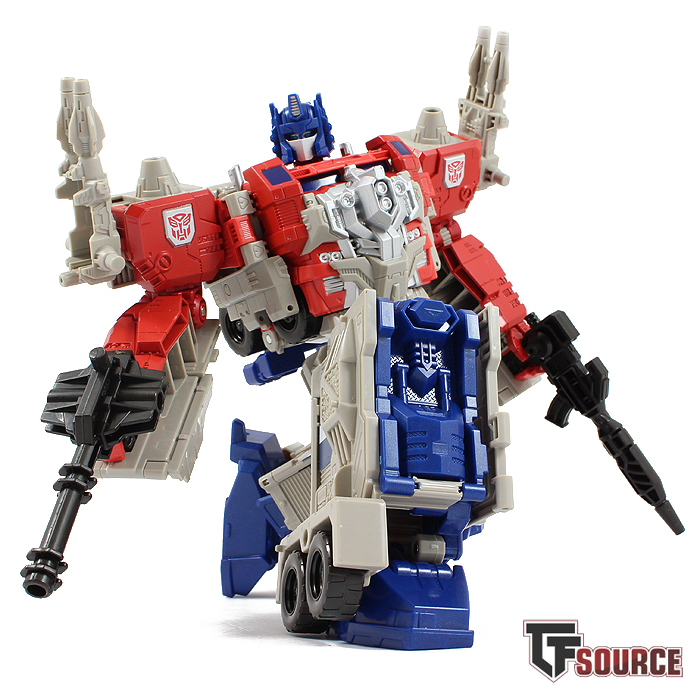 A good place to start would be Titans Return Powermaster Optimus Prime. I must admit that when pictures were first shown of this leader class figure from Titans Return wave 1, I was not completely sold on the line as a whole, wanting just to pick up the classic Headmasters characters. Powermaster Prime was also a heavy retool of Combiner Wars Ultra Magnus, a toy I did not feel much enthusiasm for. A friend brought ‘PMOP’ (Powermaster Optimus Prime) to one of our pub gatherings, and the toy did not impress me. I didn’t like the lack of posability in the legs, or the poor grip of the main black handguns, or the hollowness of the arms. That cab grille in truck mode was also an aesthetic choice I just could not get behind. 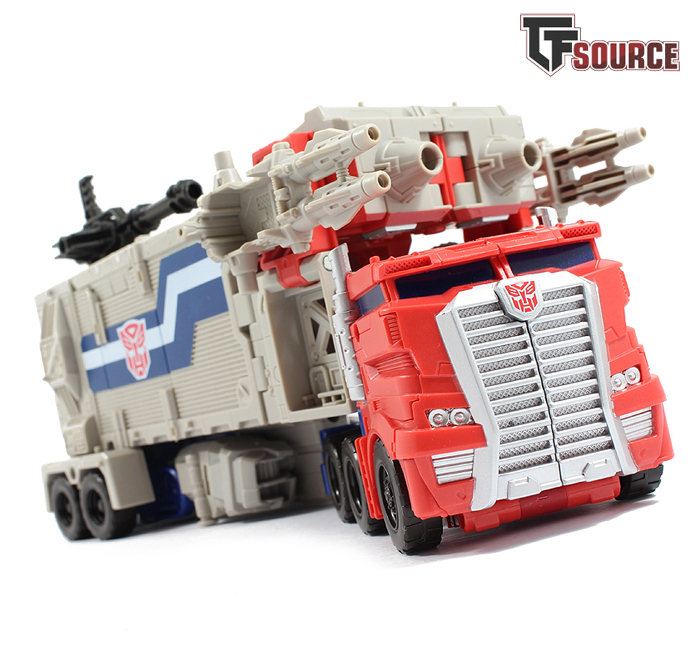 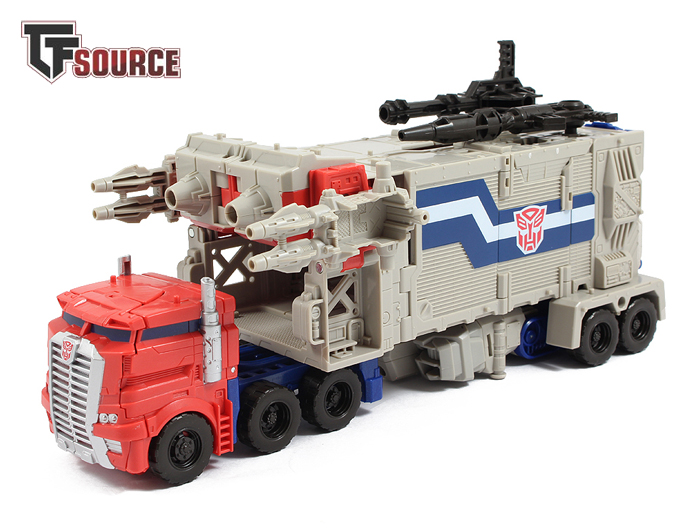 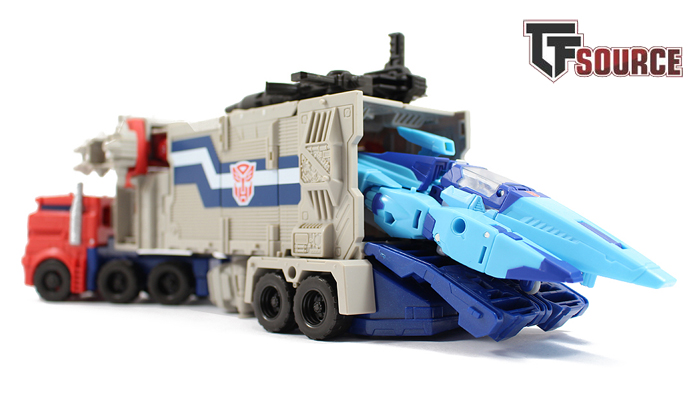 So what’s changed? My feelings towards Titans Return for a start. Since the two occasions in the pub where I handled TR PMOP, my Titans Return and corresponding TakaraTomy Transformers Legends collections have bloomed. This has included getting Fortress Maximus and leader class Blaster, two excellent base bots. The inter-connectivity and opportunities to place Titan Masters and vehicles all across those aforementioned bases has really brought life to my appreciation of Titans Return. So, I had to have PMOP for the base mode. What I didn’t realise is how much I’d start enjoying the robot mode and to a lesser degree, the truck mode. The standard base mode was not a clincher for me, looked terribly uninspired, so I had a go at fashioning one of my own (as I did with Sentinel Prime). The result endeared me to the figure even more, while some have called it church mode, Pizza Hut mode, chapel mode etc, to me it’s a space bridge. 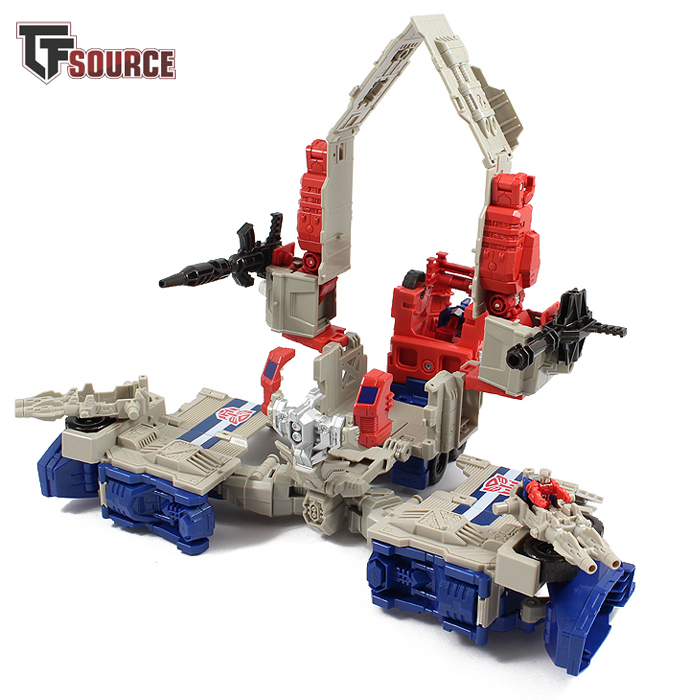 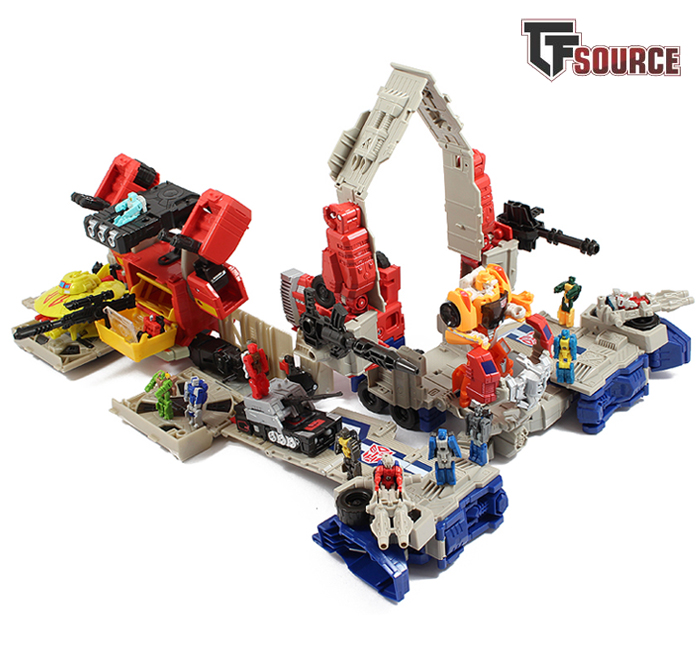 Transforming PMOP is an interesting affair, as I do find the lining up of the trailer panels a little fiddly, and really don’t enjoy the clipping together of front and back trailer sections. The cab swivel and folding-up of leg panels are nice touches, and the whole thing does leave me incredibly excited for TakaraTomy’s Legends Super Ginrai. Unlike Sentinel Prime, PMOP has a lot of TM pegs about so there’s every opportunity to load him up with the little guys. It’s funny how my growing appreciation of PMOP has forced me to re-evaluate my feelings on Combiner Wars Ultra Magnus. I didn’t even notice that Magnus’s grille is smaller than PMOP’s, something that I now suddenly find completely palatable. Incidentally, my initial opinion of CW Magnus was formed on handling the figure at one of our pub meets. 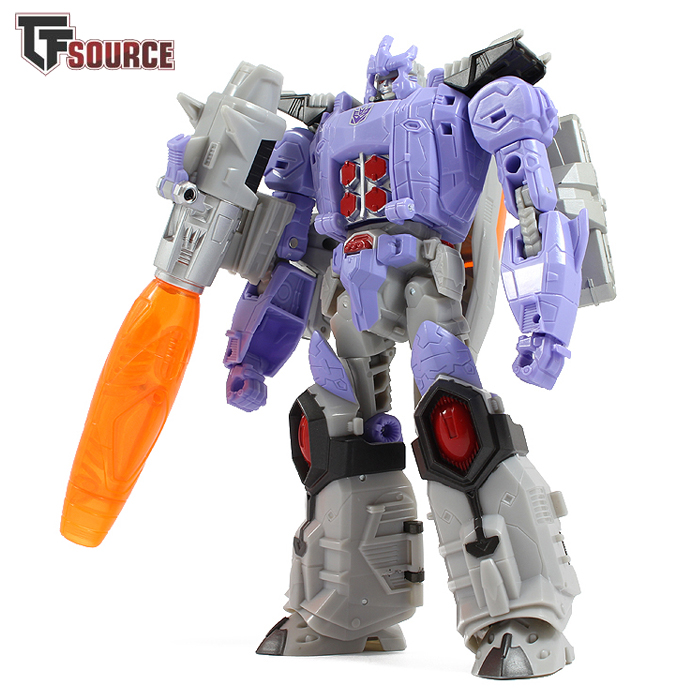 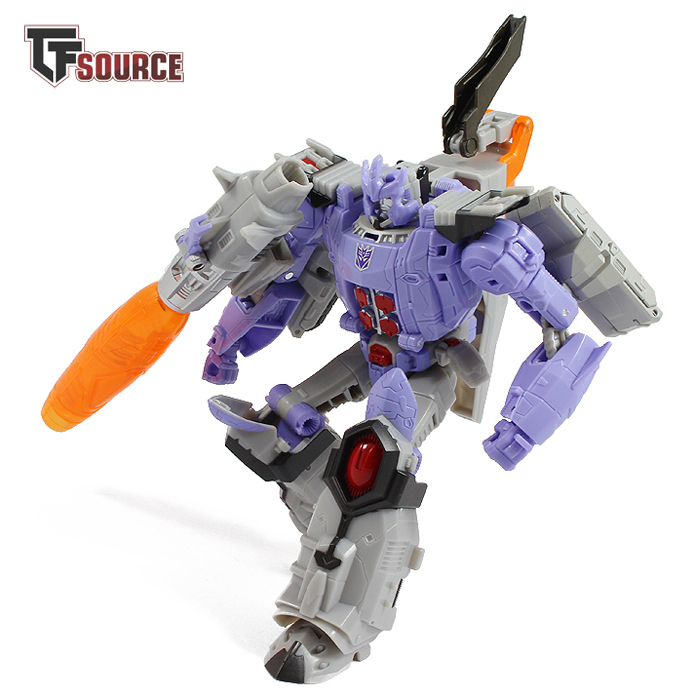 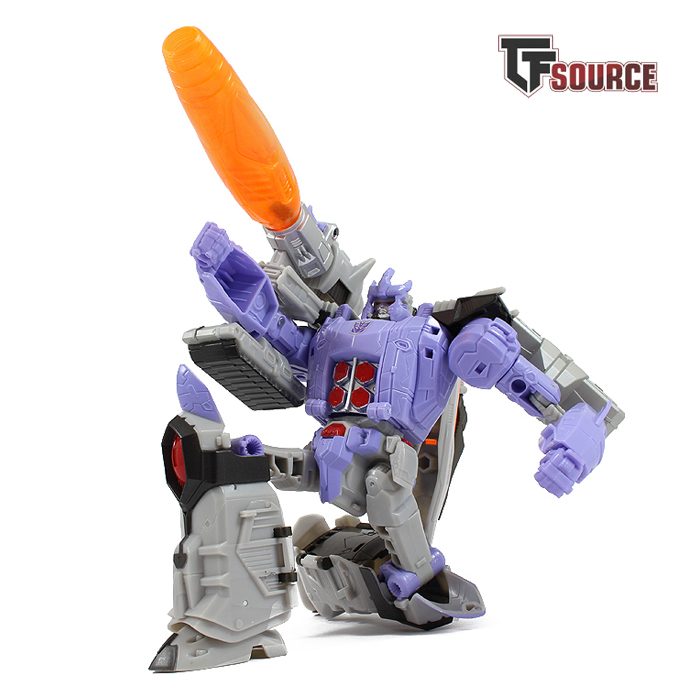 Next up is TakaraTomy Transformers Legends Galvatron, the Japanese release of Titans Return Galvatron. Once again, my first impressions of this figure were formed in the pub (I see a pattern here), and at a time when I was not considering buying non-classic Headmasters characters from Titans Return. I just was not able to swallow the fact that the flip-up mask ruined any sort of head articulation. To me that made it easy to dismiss what should have been an excellent modern mainline Galvatron. At this point I am so far beyond being annoyed by traditionally non-Headmaster characters having removable Titan Masters that it doesn’t even figure into my assessment of a figure. Seeing the effect PMOP had on me when I actually had the chance to take it home, experience it in peace and alone with good lighting, I was willing to give absolutely any Titans Return figure a chance. 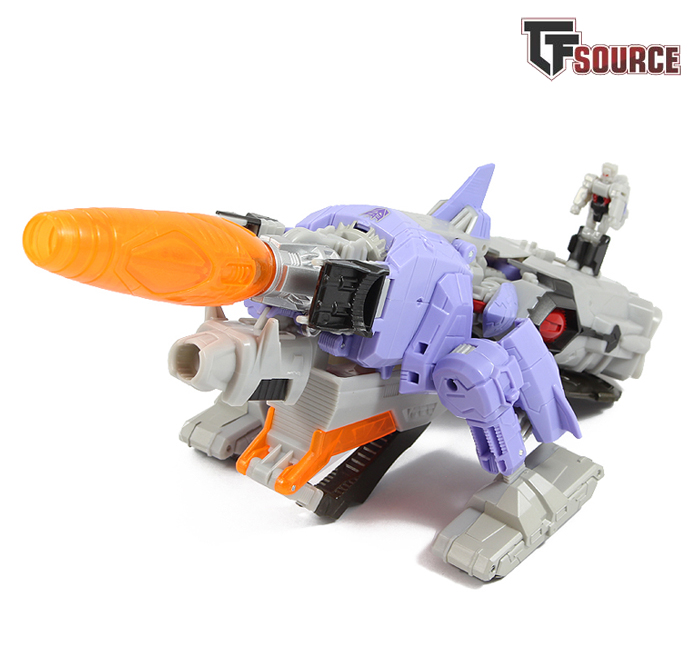 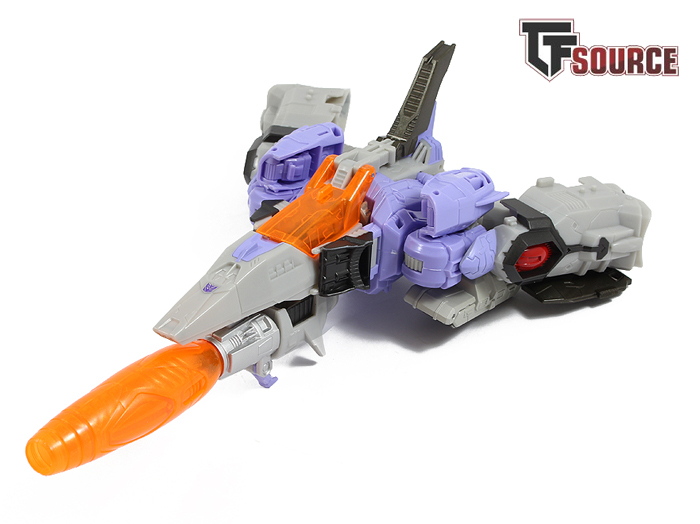 I have always been fascinated by Takara’s choice of lavender (or lilac?) for their Galvatron figures, stretching back to figures like the reissue G1 Galvatron. It’s not a screen accurate deco, or a toy accurate deco. According to Jon Strong “It will be to do with the colour representing wealth, the ruling class and power in Japanese culture. It was apparently a hugely expensive and difficult job to craft purple dyes from plants so back in the day it was only the entitled who got to wear such colours. Wisteria flowers, lilac in colour, are associated with colours worn by Emperors“. The commitment of Hasbro and TakaraTomy to make all the voyagers in this line triplechangers is fascinating, and it works for Galvatron. The robot mode is a wrist swivel and that utterly awful flip-up mask gimmick away from being incredible. It’s true, you can turn the Titan Master head, but the flip up helmet/mask remains stationary and ruins the look completely. Want to turn his head? Lose the signature Galvatron helmet. Luckily with the Legends version, the head sculpt and paint job on the TM head is glorious and actually can carry the figure, allowing you to legitimately display it proudly without its flip-up helmet. The positioning of the peg hole on Galvatron’s arm makes posing his cannon extremely awkward, so that’s a shame too. 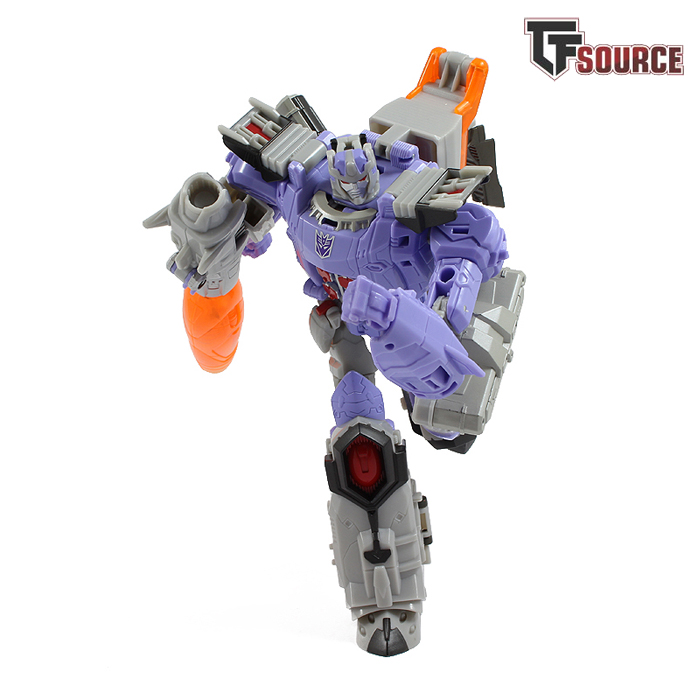 These are the kind of niggles where should you have already decided to pass on a figure, they are justification for that decision. Should you be a fan of the toy, they’re charming flaws that don’t damage your enjoyment of it enough to make too much difference. I started out as the former and am now the latter. I love looking at this Galvatron, and despite limitations he’s got excellent ankle articulation, and waist articulation, allowing him to kneel, do The Run and generally look excellent (when facing directly forwards). Alt modes are good and the addition of the tetra-jet mode is most welcome. The signature orange cannon now has a similarly lurid orange canopy to go with it, and it is far from detrimental. This is all to say nothing of the beautiful mini-Megatron that acts as his Titan Master. All told, you take this Legends Galvatron in these colours in robot mode, stick him on a shelf and he looks the business. The fact that there’s a fun triplechanger to mess with under that lilac presentation just makes it even better. 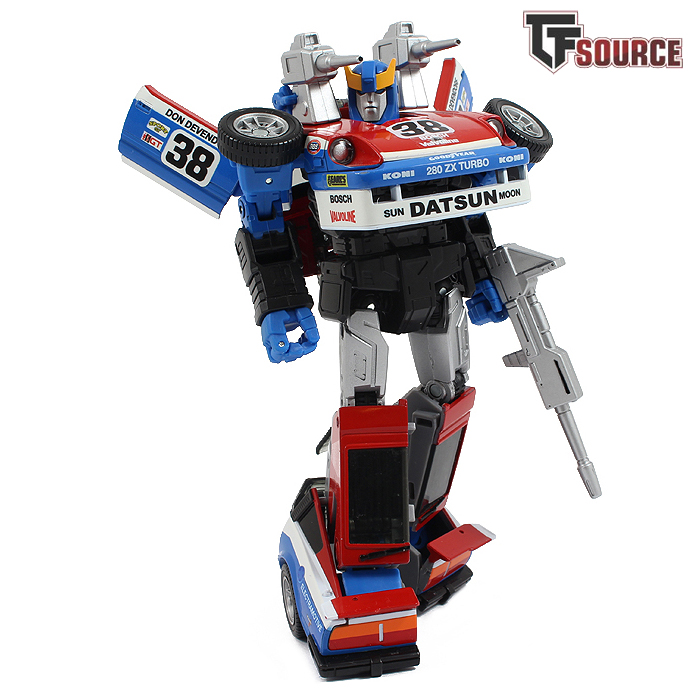 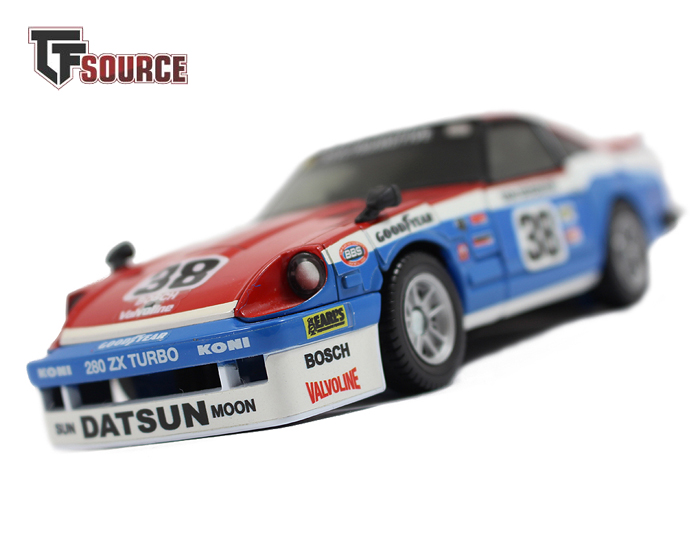 Masterpiece Smokescreen is a figure I’d given up on. The small details mounted up and crushed my hopes of the perfect Smokescreen, the Masterpiece car I was most looking forward to. I detailed my feelings on the let down here, but just to summarise, the real life car inaccuracies and the inability – in my own personal opinion – to capture the essence of the cartoon head sculpt, made him a loss. The developing looseness in the right knee did nothing to endear him to me either. Enter Sixo and a half-reprolabelled MP-19 Smokescreen at an irresistible price, and after selling my own I jumped on his. 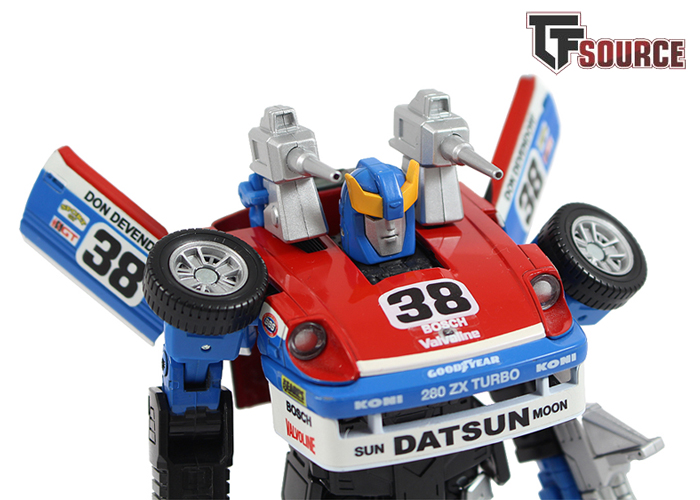 I’m very pedantic about real life race car accuracy, especially with Smokescreen, so where most sources show the Electramotive Datsun 280Z Turbo as a number 83 (unlike Smokescreen’s 38), that’s what the Reprolabels/Toyhax set is modelled on. The actual race car that Smokescreen and its Diaclone predecessor are modelled on was the Fuji 6 hour special IMSA Datsun 280Z driven by Don Devendorf with the number 38. Unfortunately, the repro set only allows you to use the driver’s name with the 83 sticker, and “The Gambler” with 38, in reference to Smokescreen’s spotlight episode from the Generation 1 cartoon. So the first step was for me to slice both sets up and combine the “Don Devendorf” with the 38 sticker. Job done. 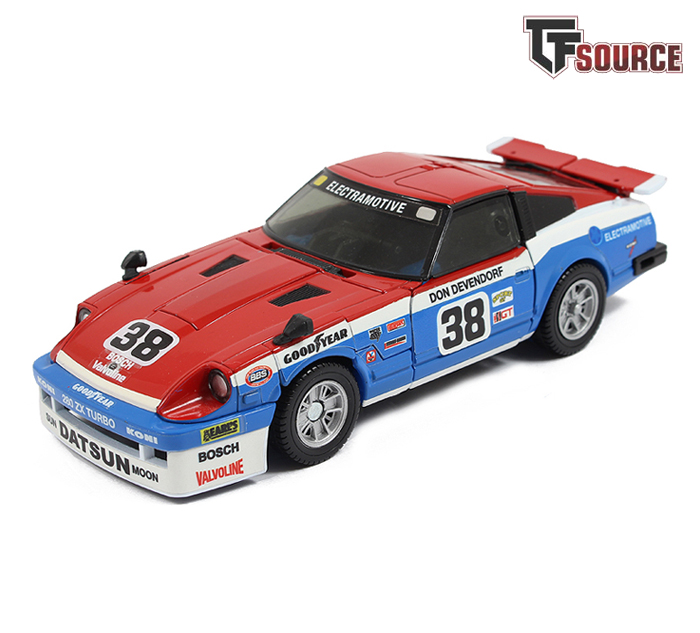 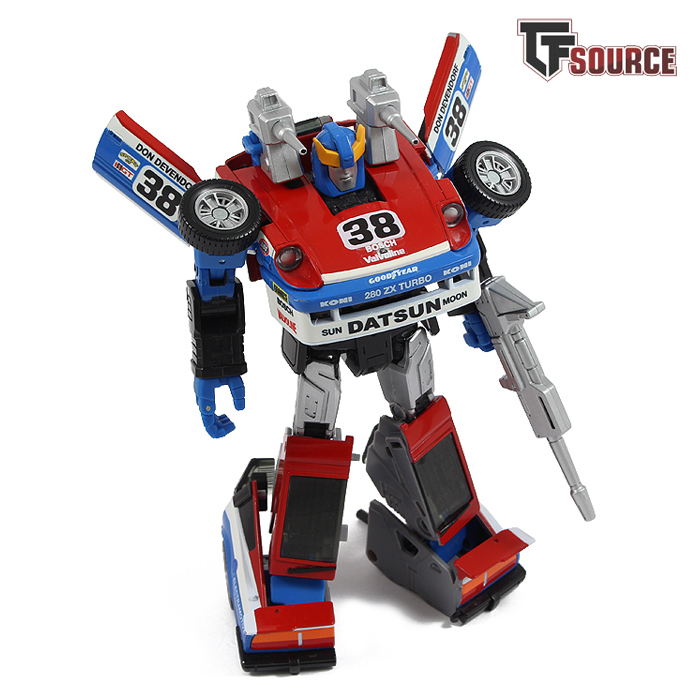 Next was Takara’s decision to leave the circular “Z” logo moulded on Smokescreen’s hood. This does not allow one to accurately place the “Bosch” and “Valvoline” stickers one on top of the other as intended, so Toyhax recommend you place them side by side. This also bothered me as too much of a compromise and so I squeezed them them in above and below the “Z”. Finally, like the original TF and Diaclone toy as well as the proper car, I slapped a 38 sticker on the hood to cover up the Autobot logo and a small part of the hood bump as is correct. The result is something I can truly love. One day when I’m feeling brave, I’ll lop off the wing mirrors too! 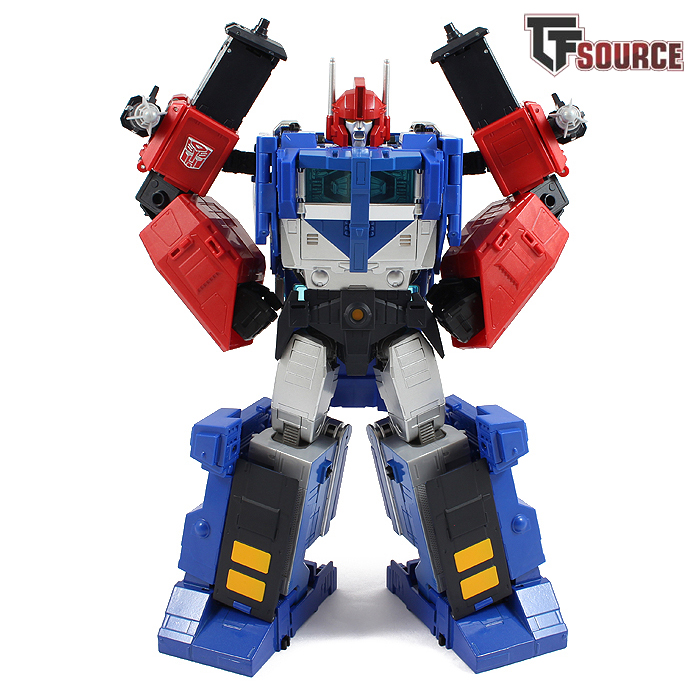 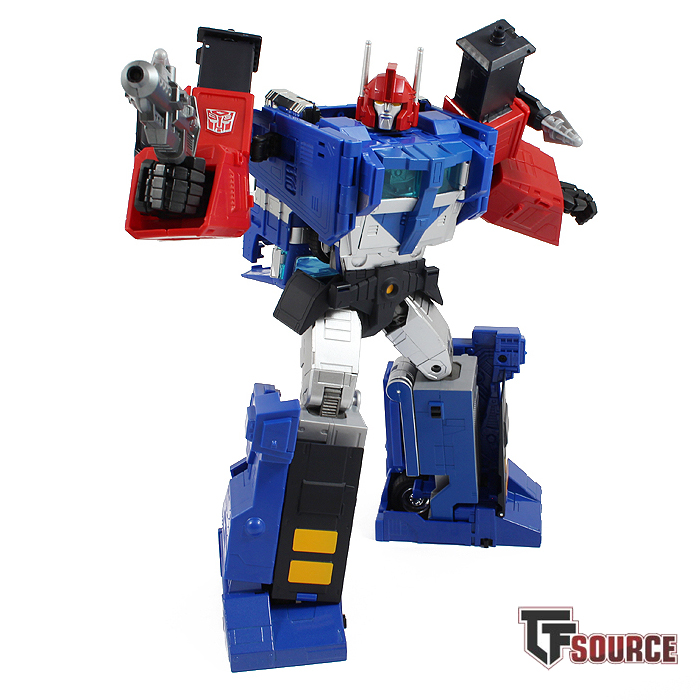 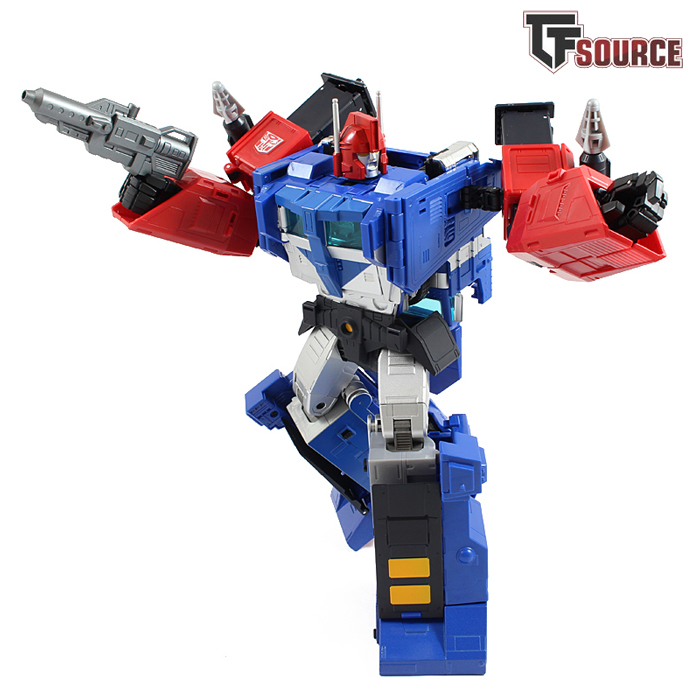 Last but not least, the freshly released Masterpiece Delta Magnus, a G1-based Powered Convoy toy. What an event, what a dream come true. However when I first got it, it was overshadowed by other more immediately accessible Transformers that I could not put down. When I pre-ordered Delta Magnus, life was great. It was just one more highlight in the year of Diaclone, the year in which the history and current flagship brand aligned to bring Diaclone back to the fore, everywhere you looked. There is categorically nothing wrong with this figure, it has one of the best transformations of all time, it is simply breathtaking to look at, and is lots of fun. 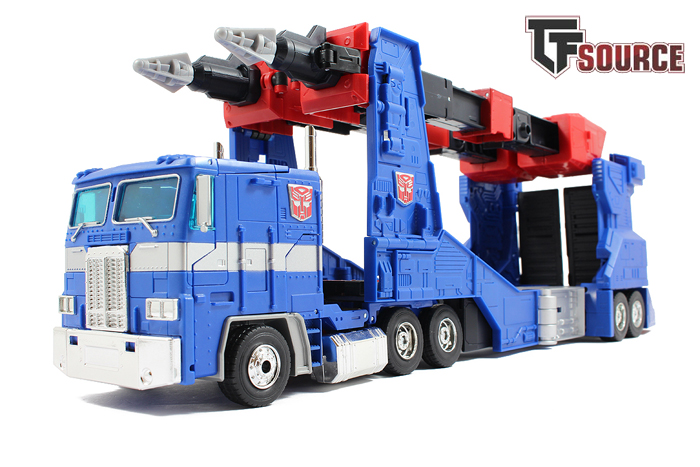 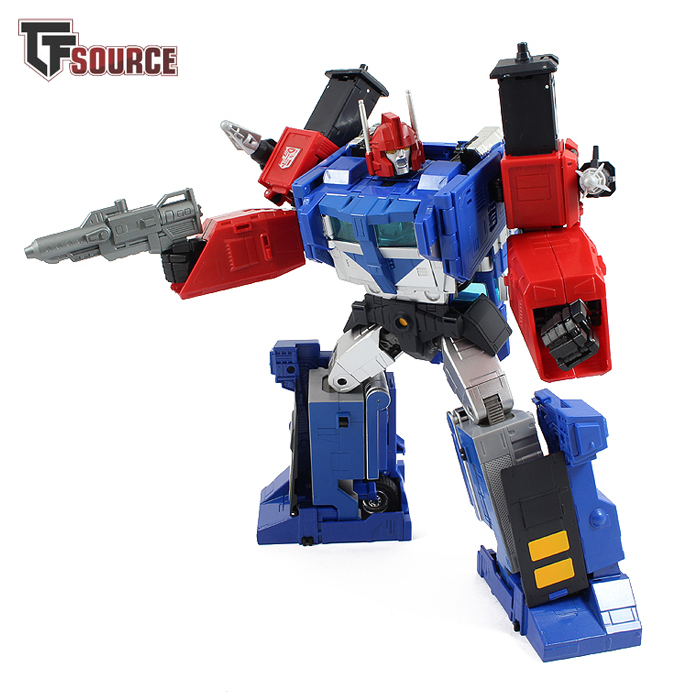 All I needed was a chance to have it to hand, and not in its box or shoved to the back of a shelf, and my appreciation reached the levels it belonged at from the start. So I didn’t really have to revisit Delta Magnus the way I did Galvatron, Powermaster Optimus Prime and Masterpiece Smokescreen. I just needed the chance to enjoy it without the distraction of other new figures dropping every five minutes that caught my eye. Taking a significant number of photographs, posing him with all the other Masterpiece Diaclone-based figures and the #DeltaMagnusOnThings Twitter/TFW2005 event have assured him a much appreciated and treasured place in my heart and collection. I mean, look at him, look at what he represents, was it ever going to be anything but true love? I just needed some peace and quiet, some time together with the figure, and the chance to enjoy doing photography/editing without a ton of other stuff going on. Every new Transformers figure and our true assessment of it really do benefit from that quiet time to explore, investigate and enjoy in a tranquil setting, without distraction, where it is the centre of the universe for a short while. Just like when we were kids. 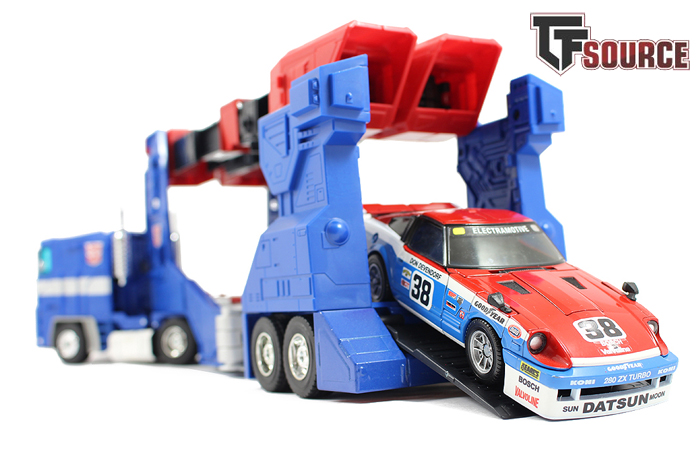