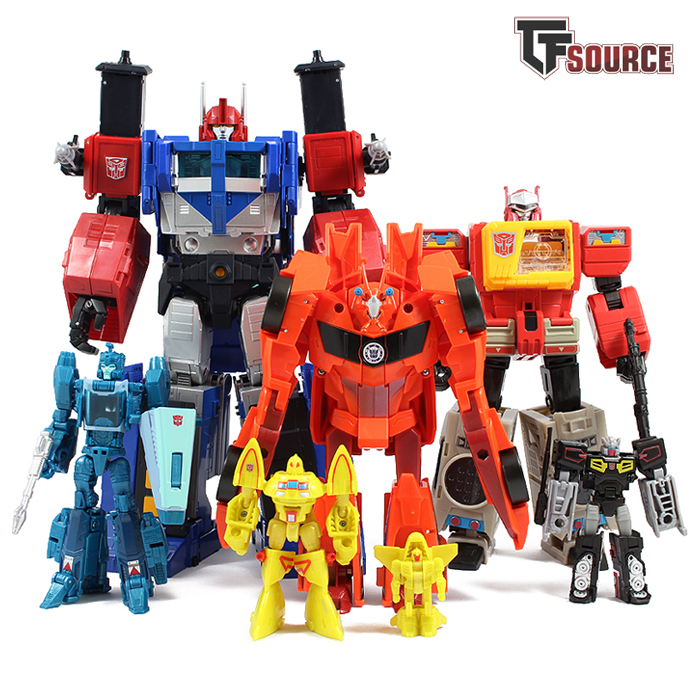 Reinforcements from Cybertron! From the history of Transformers, from Diaclone, from the Marvel comics, from a 1986 TF:TM movie trailer, from the pages of More Than Meets The Eye. Just last week I was complaining about the volume of Transformers toys I’d picked up, and not one day after that article was published, I had a number of boxes delivered together. Add to that a trip to Toys R Us fuelled by pub-meet enablement and here we are with the above motley crew. My local group of Transformers collectors have a lot to answer for, actually… 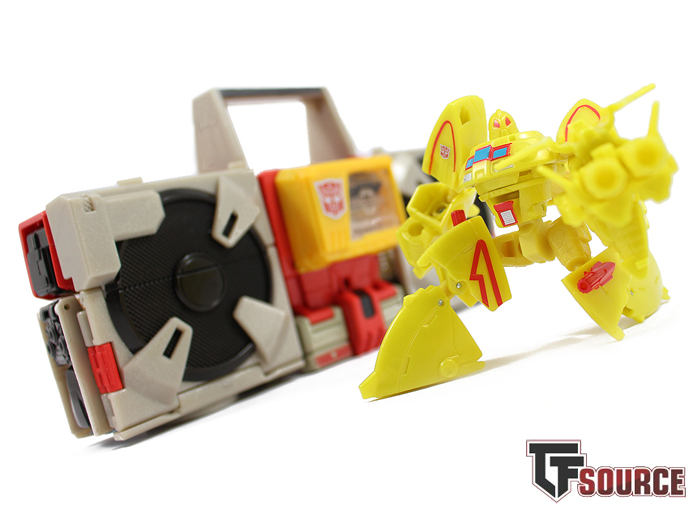 Front and centre is Combiner Wars Scrounge, a yellow repaint of the Legends class Cosmos figure that was so well received. Scrounge comes exclusively (for now) as part of the Hasbro Combiner Wars Computron giftset, so as soon as a friend bought his set of Technobots, I asked him to sell me Scrounge separately. He agreed, and so I have him paired up with his partner from the Marvel comic, Blaster. While Scrounge does not turn into a wheel or have his special fingers, he does come with the same little Micron-style transforming Targetmaster that Cosmos did (Payload), but also repainted yellow. 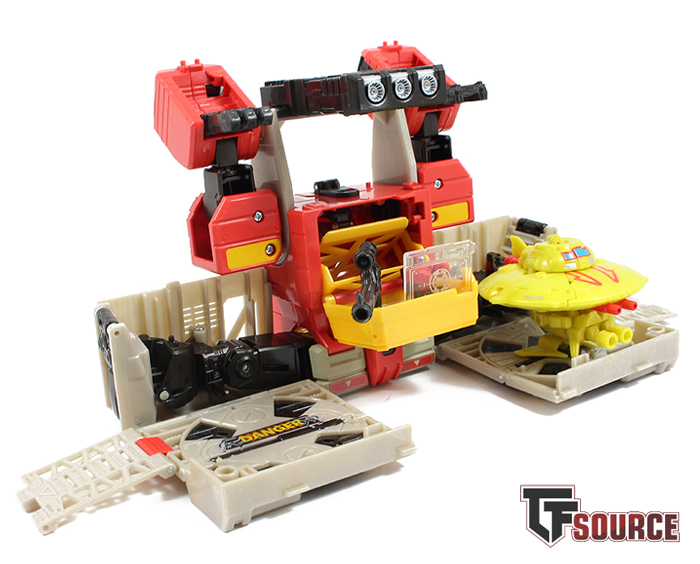 Having never experienced Cosmos, I was quite impressed by how fun Scrounge was to transform and how well it interacted with the little shuttle/bot/blaster. He looks great in robot mode and is plenty posable for a figure of this size class. I do enjoy coming late to things that collectors have raved about before, and knowing how much demand there is for Scrounge by himself thanks to Marvel comic characterisation, I feel pretty lucky to have scored it without buying a whole combiner. Alongside Titans Return Rewind and Wheelie, Hasbro are putting out some belters at Legends class. 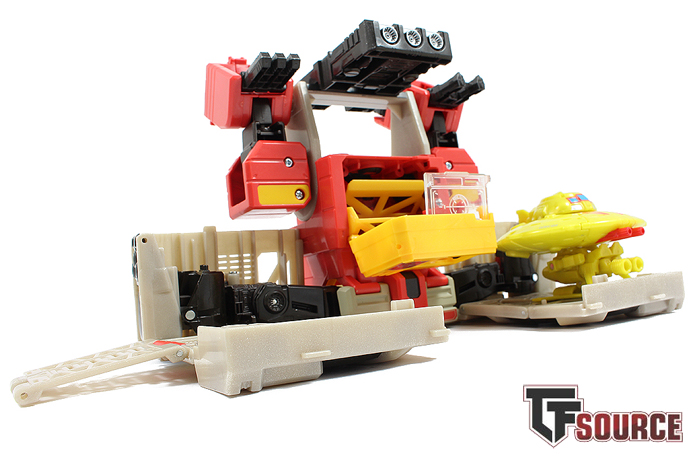 Titans Return leader class Blaster, who is pictured with Scrounge here, was a toy I summarily dismissed as looking far too much like something made to appeal to children and not adult collectors. Too bulky and blocky, a duploformer. How wrong I was. Again. Blaster feels great in hand, good joints and really fun transformation that begs to be repeated over and over. The three modes are all fun and I can’t decide on which I prefer. In the box he has his boombox handle very visible above his head, and I found that to be jarring. However, once you take it out of the box, you see that it just folds down behind him for robot mode, giving you the very classic Blaster look.

In base mode he has so many nice features and an absolute ton of pegs for tiny Titan masters to clip on. He even acts as a great landing pad for Scrounge in UFO mode. The ejecting mechanism is good and the generic black cassette-type device actually looks really neat when attached to the handle in base mode. His Titan master “Twin Cast” is well painted and resembles a tiny Blaster. The actual head sculpt on the big robot is superb too, keeping up the very high standard of sculpting, playability and interactivity of this toy line so far. Attaching him to Fort Max will be the cherry on top of a very fine Transformers toy. 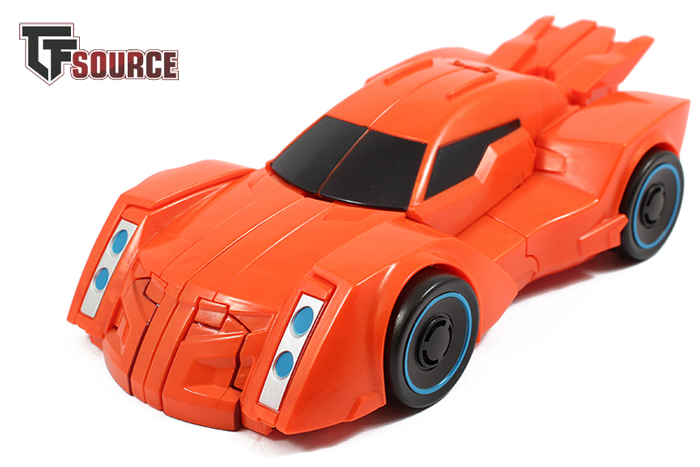 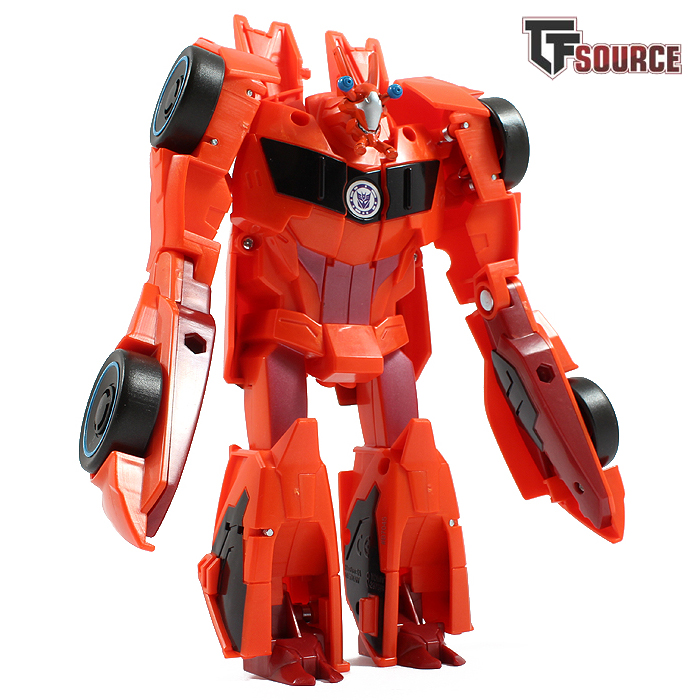 Weren’t expecting this, were you? Neither was I, nor all of the pub meet attendees who fell in love with the Transformers Robots In Disguise 3-step Bisk. First off, it’s Bisk. A lobster who turns into a car and they called it Bisk. An avid video gamer, Bisk was featured in precious few RID cartoons through season 1 and 2, but I was looking forward to a toy of this thing until I sold my RID collection and gave up buying the line. 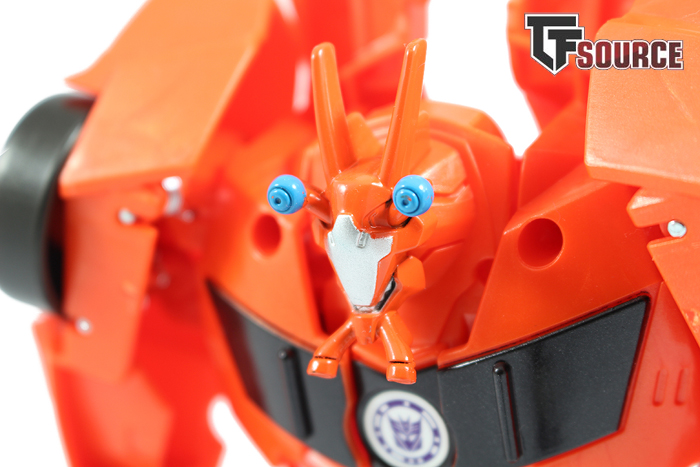 Don’t judge prematurely! There must be something about a figure that on the surface appears to be an affront to any adult Transformers collector and their sensibilities, and yet magically enchants all at a gathering. You need to take this thing, hold it in your hands, and experience the mental engineering involved in twisting one half of the figure 360 degrees to see it transform completely from a very cool looking race car to a pretty accurate lobster robot! Once you transform it and get the rhythm sorted, it is unfathomably addictive and cannot be put down. It is the essence of what makes Transformers irresistible as a concept and a toyline. We all wanted our childhood toys to transform as quickly and stylishly as they did in the cartoons or comics, but the reality was often a few minutes of fiddling before the desired effect was accomplished. There are thousands of TFs that will keep you engaged with their thoughtful conversions, but for out of the box, glorious hyper-change enjoyment on an unimaginable level, 3 step Bisk is a winner. I kid you not when I say this is one of the Transformers toys of the year. Thank goodness for folks like Tikgnat who buy stuff like this and share its virtues with those of us who may have ignored it. 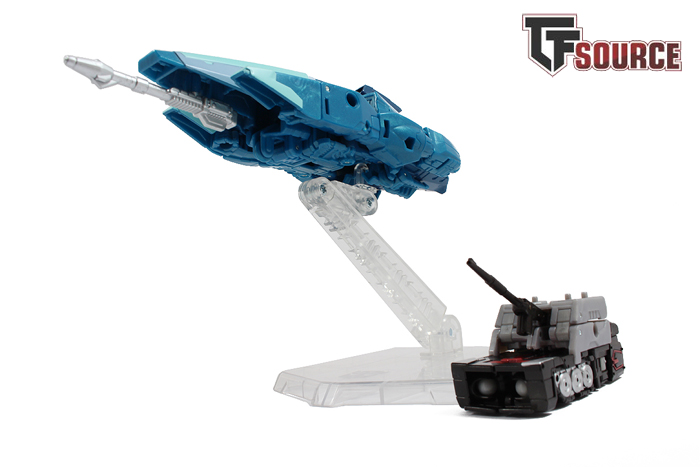 There are actually 3 new purchases in this image. Titans Return Rewind (bought on the same TRU trip as Bisk), Hasbro Titans Return Blurr and a clear Takara Tomy figure stand in the same mould as MP-25 Tracks’s stand. All three were opportunistic purchases for items that just went on sale, or I was in the right place at the right time in the wrong frame of mind! I was told that Rewind was of the same quality as other notable Legends class figures of recent times, and he is indeed a lot of fun to play with. However, every time I fold those grey arm sections over, I wince. He also has a fair amount of difficulty standing up. I have also lost count of the number of times I’ve tried to transform the legs while forgetting his weapon was still clipped in there. 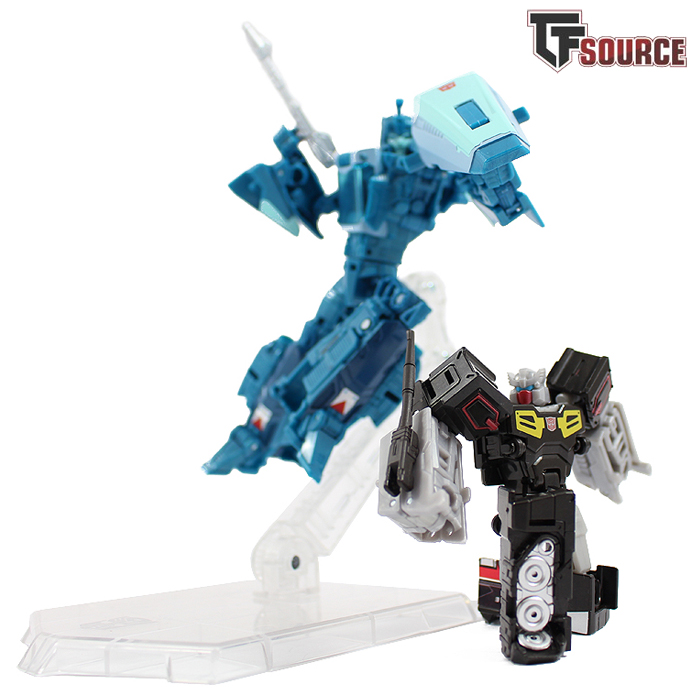 The look of Rewind is very MTMTE, down to the recorder on the side of his head, and I like that. Even though the main appeal of Titans Return for me is the harking back to 1987/8 and the Headmasters toy era, since Hasbro went all MTMTE with Chromedome’s head sculpt, we might as well pair him and Rewind up as (indirectly?) intended. Rewind does of course interact with Blaster as a cassette, too.

Blurr is the best deluxe of the entire line so far, and his ‘underwater’ deco for the Hasbro release is something the mould completist in me could not resist. It’s a wonderful toy, it looks gorgeous in both modes, he’s a delight to transform and dammit I’ll buy this sculpt in any colour. We had 1986 Blurr as a standard toy and a 1987 Targetmaster with a slightly different paint job, that’s a good enough reason for me to double dip with the Takara Legends version! The Takara Tomy figure stands are intended to work with Legends figures, but TR Blurr’s fit is not that snug and he is prone to rotating on it. I know some Tracks stands have broken, so I’m concerned how a clear plastic one will hold up. So far so good. 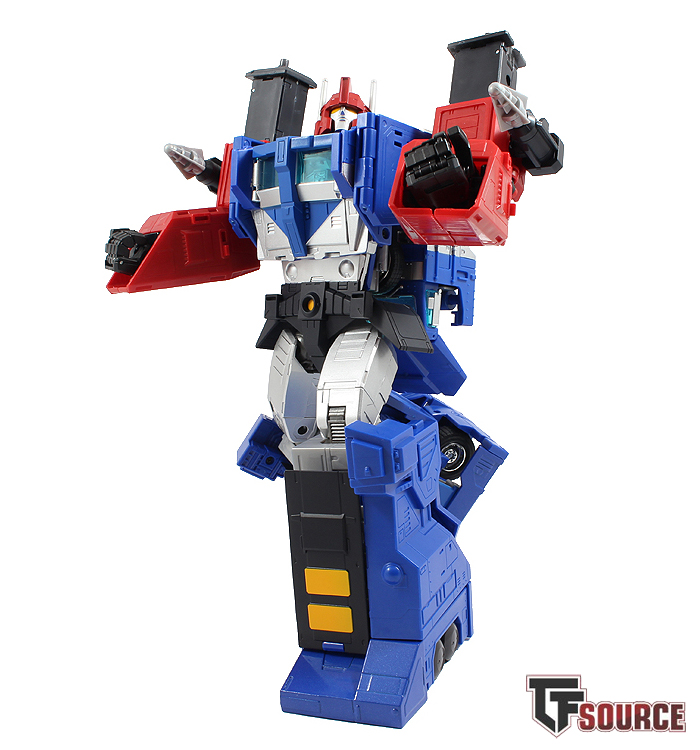 Finally, it’s Masterpiece MP-31 Delta Magnus – an homage to the colours used for Ultra Magnus seen in the Transformers:The Movie trailer in 1986. Those colours were of course based on the vintage toy’s Diaclone colour scheme, specifically the Powered Convoy Car Robot. Looking at the immense paint job employed by TakaraTomy on Delta Magnus (and even the trailer footage), they went with the last released version of Powered Convoy in Japan as the direct inspiration, the one with the chromed trailer.

MP Magnus was already my toy of the year in 2015, and the Masterpiece mould that most impressed me. Slapping the Diaclone colours on it was always going to result in a watershed collecting moment. Don’t get me wrong, it has been masterfully executed, it still has one of the best transformations on a toy ever and it still amazes me that this even exists – a proper official G1-styled Powered Convoy…and yet of all the above it’s TR Blaster that gets the most play from me. MP-31 comes with Marissa Fairborne, two extra faces for MP-22 Ultra Magnus featuring the large aviator-style eyes and even an extra shouty face for Delta Magnus himself. We were never going to get a Powered Buggy but some form of it was entirely doable from the MP-21 Bumble exo-suit figure. 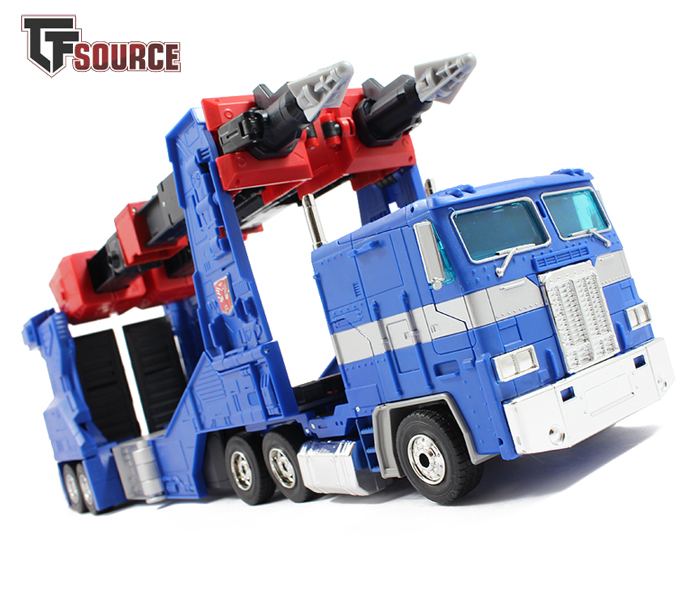 I suspect that once my enthusiasm for Titans Return normalises and my situation allows me to display, enjoy and photograph my Masterpiece figures more, I’ll come to appreciate Delta Magnus the way my anticipation and initial pre-order excitement indicated I would. You could also argue this is once again a case of “Too Much Too Soon” rearing its head, because if Delta Magnus was the only thing to arrive this week, there would already be a review up with plenty of historical references thrown in. As it is, the Transformers ‘toys’ have won this week. Above all, nearly every toy in this haul reminds me of someone. Blaster and Blurr’s previous owners are friends from Twitter/TFW, Scrounge was bought because of one friend’s love for the character rubbing off on me, the figure stand was basically a gift from the mate who sold me Scrounge, Bisk was a result of another local buddy’s enthusiasm and enabling prowess and the purchase of Delta Magnus was only made possible thanks to the kindness and understanding of a friend who took payments as I could make them. This collecting bollocks really is about so much more than just amassing toys. Reinforcements from Cybertron? Reinforcements from my friends. 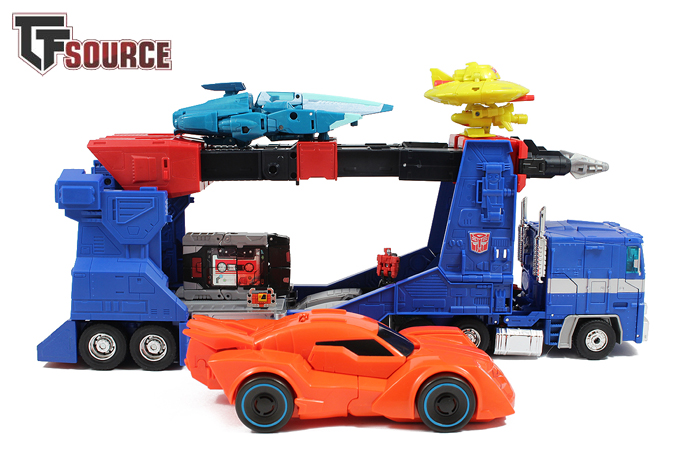