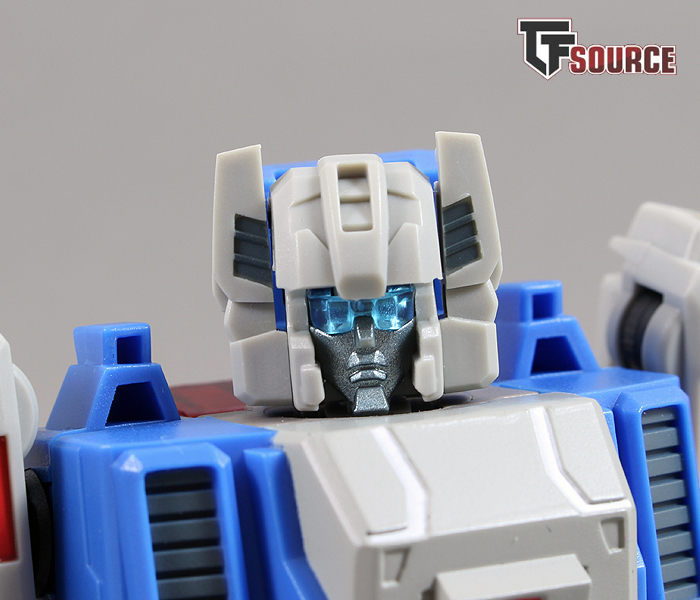 Last week we discussed some of the finest official Hasbro and Takara Transformers toy headsculpts with the help of fellow collectors. This week we look at some of the standout headsculpts from unofficial 3rd party Transformers toys. While there may not be as much to choose from, and arguably 3P companies often fail to scale the heights official figures do when it comes to headsculpts, some companies really know how to nail a character. 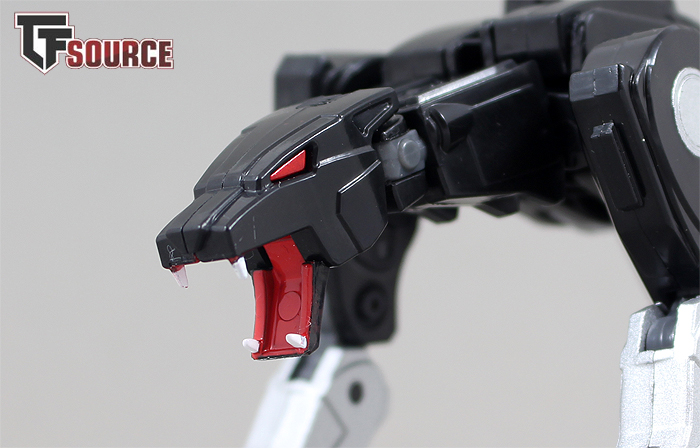 With the official headsculpts, I found the results to have been widely accepted and the same names kept cropping up. I have a feeling this week’s results will be far more controversial and dependent on the contributors. The four collector submissions we got may have been completely different had I asked last week’s contributors. While that sounds obvious, I can’t tell you how many times Masterpiece Prowl, Generations Jetfire and Unite Warriors Constructicons were mentioned in conversations I had with collectors about favourite official headsculpts. I have a feeling there will be more of a reaction to figures left out of the article on this occasion… 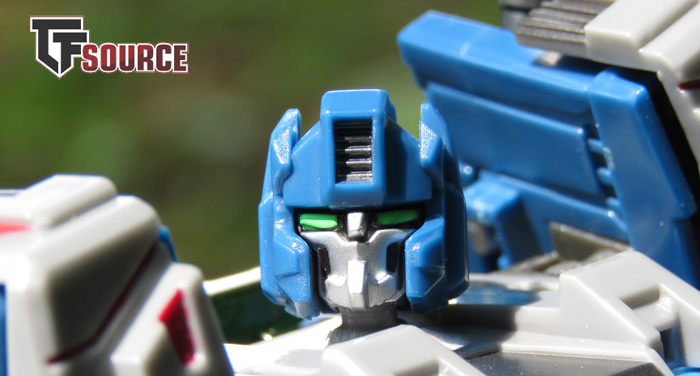 Starting with Sean Meece of Jetbolt’s Toy Photos, he opts for an original character and a figure from the earlier days of the 3rd party scene. “I have many 3rd party figures in my collection. Out of all of them, my favorite headsculpt is Fansproject Steelcore. The head itself is very Orion Pax/Optimus Prime-like in design. If this was an official figure, I would have sworn this character would have been some relation to him. Another feature I like is the faceplate. It’s not a smooth one like MP Soundwave or MP Optimus Prime, it has a chin going above part of it, which is something I don’t recall seeing on figures before or after. The figure also has a nose above the faceplate which is really quite intriguing to me. Just thinking on the spot, the only figure I recall having both a faceplate and a nose on a figure would be Animated Optimus Prime. Now unlike with Animated voyager Optimus Prime, Steelcore has no moving faceplate feature.

“Looking towards the eyes, I like the design of the eye area. Depending on the angle, the sculpt allows the figure to appear as though it has an attitude. Besides that I love the neon green eyes. It’s so refreshing to see over blue or red. I like how in sunlight they can reflect off the sculpted areas that have been painted black. While not in my preferred translucent plastic, it has a glow effect between the paint and light hitting the sculpt areas”. 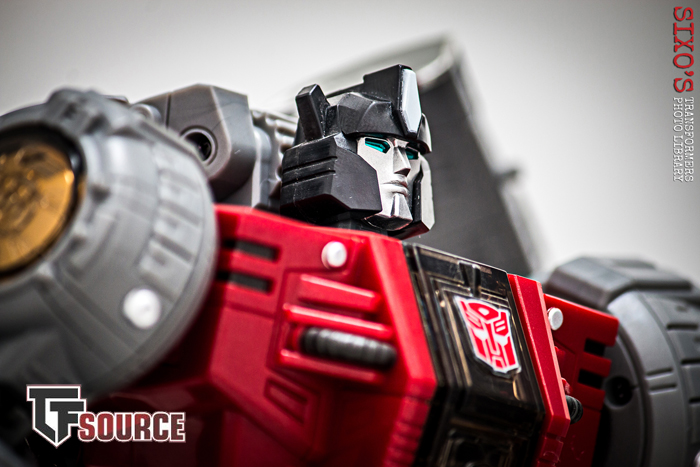 Considering that FansToys are not held in high regard for their headsculpts, Sixo of Sixo’s Transformers Photo Library is inviting a bit of controversy with his choice, although I too agree that Stomp was a turning point for FT headsculpts. “Best 3P headsculpt? For me it’s FansToys Stomp. This was the first figure that popped into my mind when asked the question, and that opinion did not change even after a (relatively thorough) examination of the rest of my collection. To me, the best headsculpts not only look amazing unto themselves, but also have to recreate all of the right details just so, in order to perfectly evoke the original character as you remember them from fiction and give you that real sense of nostalgia that you are finally seeing them made real. For me, Stomp does all of this and more.

“I’m actually of the relatively unpopular opinion that FansToys do a great job of the majority of their headsculpts (the odd exception aside), and I really enjoyed both Scoria & Soar’s interpretations. However, Stomp is just so wonderfully sublime that he’s in another category, having perfectly captured the intended character to an absolute tee. Add to this it’s surprisingly versatile – it really gives me a sense of the gentle giant who is inherently peaceful by nature, but also more than capable of holding his own on the battlefield should the time come. I find that I can really imagine the original character’s animation voice coming from this figure – it’s just perfection. I rarely use the phrase ‘I can’t imagine how TakaraTomy would do better’, but in this case I feel it applies”. 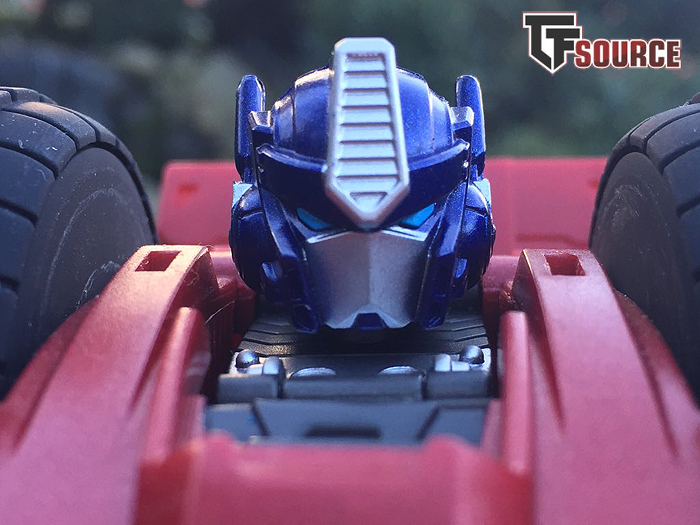 I must admit Steelcore took me by surprise, but Stomp was high on my own list. Australian collector HQT of STL’s Soapbox threw another unexpected face my way. “Having to choose one really forces your hand. My immediate instinct was for something from the MakeToys stylised CHUG stable but there are so many great choices there that it made it paralysing to have to pick just one. Constraints though force you to really step back and I’d have to settle on a new entrant: SparkToys Alpha Pack.

“SparkToys had one very specific remit with Alpha Pack: evoke the modern era of Cybertronian goodness that was the War Within. Long having left TFs behind, the War Within was the hook that dragged me back into the collecting foray. It awed me with these fantastically futuristic alt modes that were part of a cohesive design aesthetic that homaged G1 but at the same time was new.

“Iconic in that was Don Figueroa’s gatefold cover that featured WW Optimus Prime with his bulky proportions. His chest departed from the iconic blue windscreens that we all knew and loved as kids but there was no mistake once your eyes fell on that head sculpt. Stylised as it was, it was without doubt Optimus Prime. Not the same as the G1 cartoon but all of its smooth curves evoked the intrinsic nuances of Optimus’ nobility and heroism. Every time I look at Spark Toys Alpha Pack’s head sculpt I’m transported back to that time over a decade ago and I’m reminded of why I fell in love with this hobby again”. 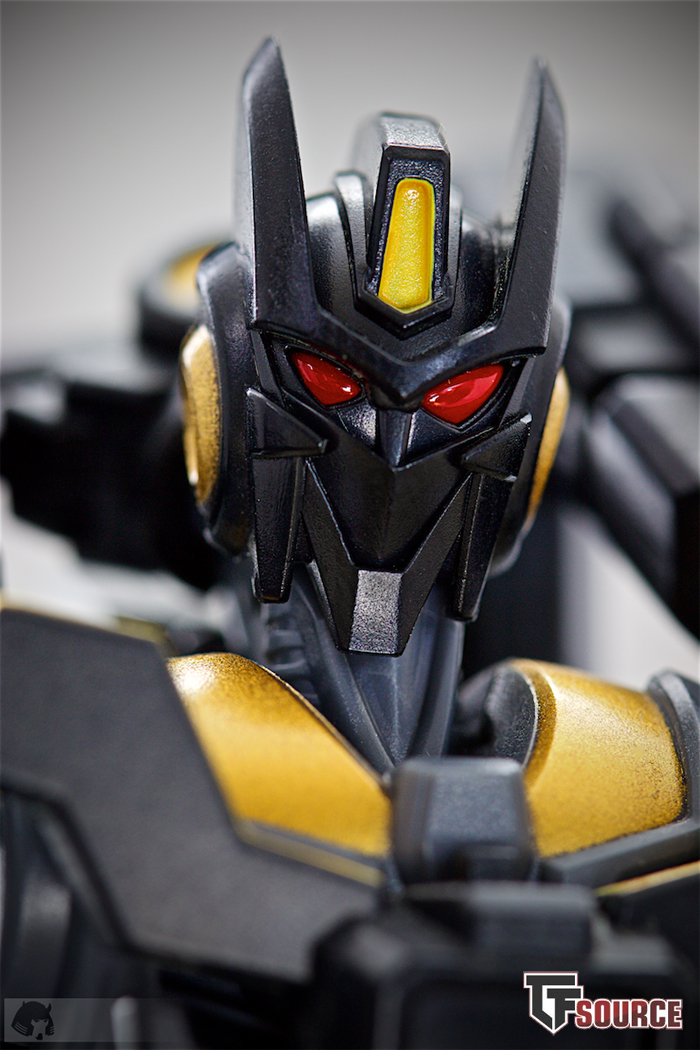 Here’s another figure that was very close to my own winning choice, Mastermind Creations Reformatted Cynicus, from the company that so often scores highly in this area of design and execution. Ian Reid of HardReturn Photography went with the exclusive Asterisk version. “When it comes to being accurate to the source material, there aren’t a lot of headsculpts that get closer that Mastermind Creations Cynicus. Looking like it was ripped directly from the pages of More Than Meets the Eye, Cynicus looks every bit the sinister sniper (rifle) he is. A thin, lean body with articulation all over the place, but on top of it all is a beautiful head sculpt. With a thin, mean nose tapering under an angular faceplate that somehow still has a big square chin, and 2 giant, red, glossy eyes looking out from under a brow ridge that becomes 2 horns, the face is full of character.

“Going back to those eyes for a second, the fact that they’re asymmetric works to not only convey a slightly quizzical, comic book look, but also works in that a sniper will look through one eye when aiming. On top of all that, the head is attached to a wonderfully articulated neck that is also one of the best neck sculpts I’ve seen (is that a thing??) which allows you to get even more emotion from the malevolent marksman. Pictured here is the Asterisk Mode version because it looks just a hint more evil. This wasn’t an easy choice for me though! His brother Anarchus was a close contender, as was the marvellous Master Made Titan (although that felt like too much of a cheat) and, in the end, he’ll probably be replaced soon by…something very much related to him, but for now this uncommunicative crack-shot continues as my favourite, unlicensed headsculpt”. 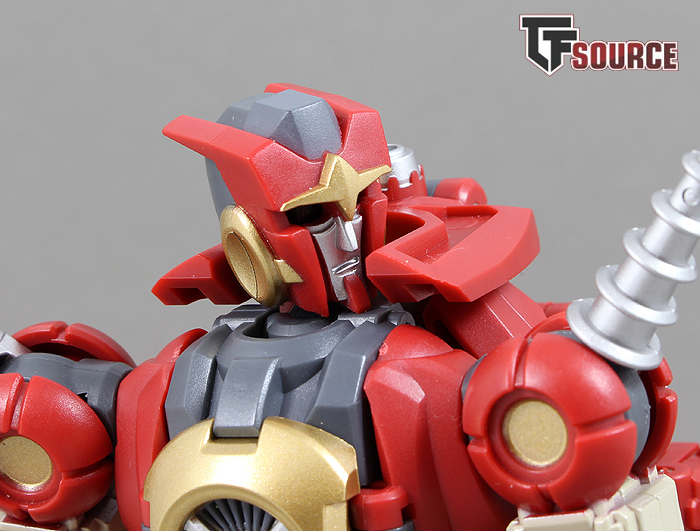 Ian mentioned Mastermind Creations Anarchus, and I must admit that this figure was pretty much the first one that came to mind when deciding on my own personal favourite 3rd party headsculpt. I look at him and I feel as though the designer captured not just the perfect likeness, but also injected the head mould with every ounce of character available to the figure. That’s saying a lot considering how infrequently he has actually appeared on the pages of More Than Meets The Eye. The black lifeless eyes and the slightly pained facial expression make Anarchus unforgettable and quite unique, as well as entirely true to his nature. When the creator responsible for this character’s entire fictional existence is impressed, you have to stand up and take notice. However, I just could not shake the feeling that another had won my heart, because I kept going back and forth, and eventually I set up another photoshoot tonight – when I should have been producing this article – just to get another couple of pictures of what I consider to be my favourite 3rd party headsculpt. 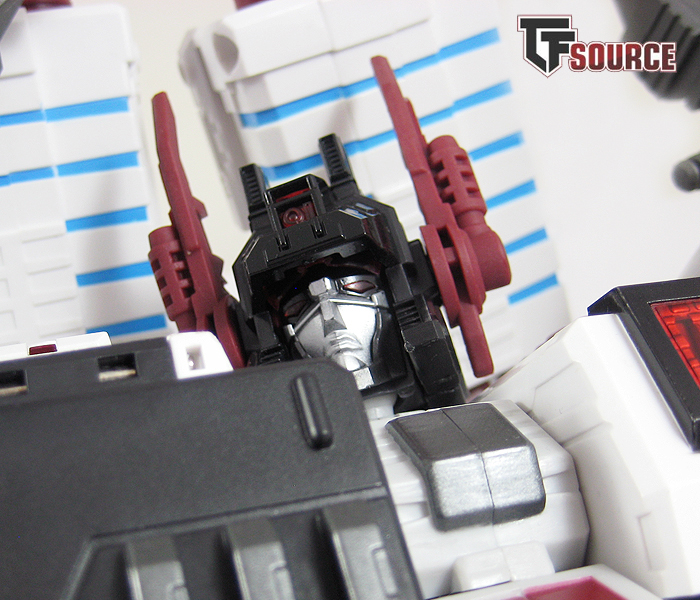 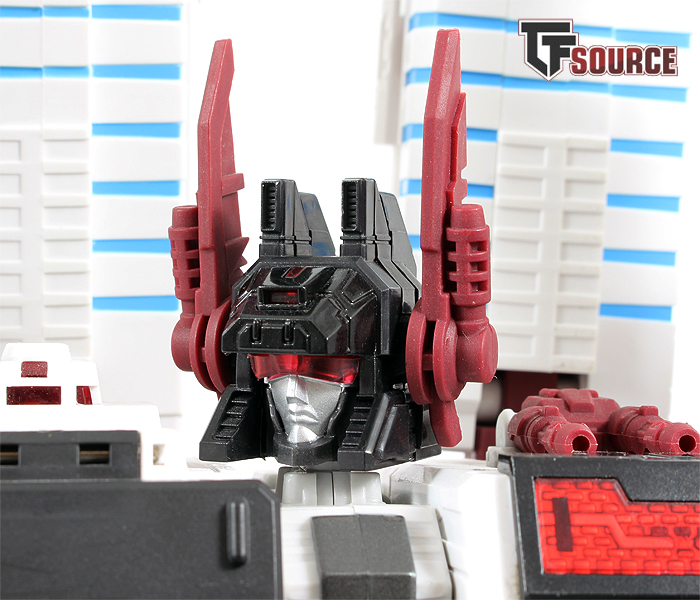 MakeToys Citybot Utopia. I love Ocular Max Jaguar for his accuracy and aesthetic perfection, MakeToys Gundog and Wrestle impressed me as well. I recently discovered the sterling work that Fansproject did with their Function X line, especially Browning II, and the somewhat related excellence exhibited by MakeToys MTRM Headmasters Cupola and Ironwill caught my attention. I couldn’t forget the superb work done by MMC on Terminus Hexatron Continuum, Spartan and Commotus. However, the colossal and beautiful Utopia towers above them all both literally and figuratively. Sporting one of my favourite gimmicks, the eye/visor interchange, his gorgeous face has expressive, unimpressed and stoic lips. He has a perfectly formed nose set within a deliciously sculpted and detailed – but stylised – helmet. I so very nearly chose Anarchus, but my glance always drifted back to Utopia. It’s virtually one year to the day I received him for my 5th wedding anniversary as well, so it’s the perfect opportunity to celebrate once more.

When a headsculpt fires your imagination, inspires you creatively and begs you to spend more time with the toy, then you know it’s special. Accuracy, an homage, originality, craftsmanship, personality or just plain perfect execution can all be responsible for elevating a headsculpt above just being a robotic face. Many 3rd party releases that I looked forward to and still own, or want to own, are let down slightly by the headsculpt even when they shine in every other department. It reminds me how much I think many unofficial designs still have work to do in capturing that essential Transformers ‘look’, but the figures featured here go some way to showing that it’s not an impossible standard for the 3P companies and their artists to meet. 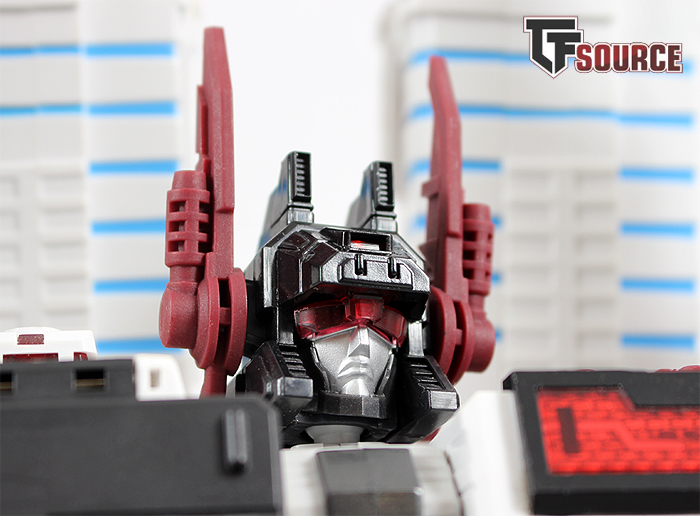 Many kind and gracious thanks to Sean Meece, Sixo, HQT and Ian Reid for their excellent contributions.