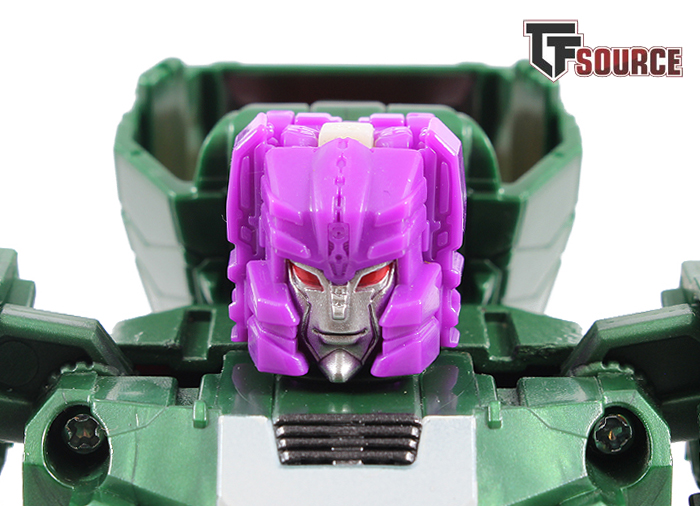 A head sculpt can make or break a figure. Some of the nicest overall Transformers figures I have are occasionally let down by a weak head sculpt that is either too vague in its features, unrepresentative of the character it is supposed to be or just plain unpleasant. On the other hand, certain figures of an average nature can be elevated by a superb head sculpt which scores highly on the aforementioned criteria and exudes charm and character. This week I asked a few of my esteemed Transformers collecting peers to contribute their favourite official Transformers head sculpt across any era or sub-line, and explain why they chose it above the rest. 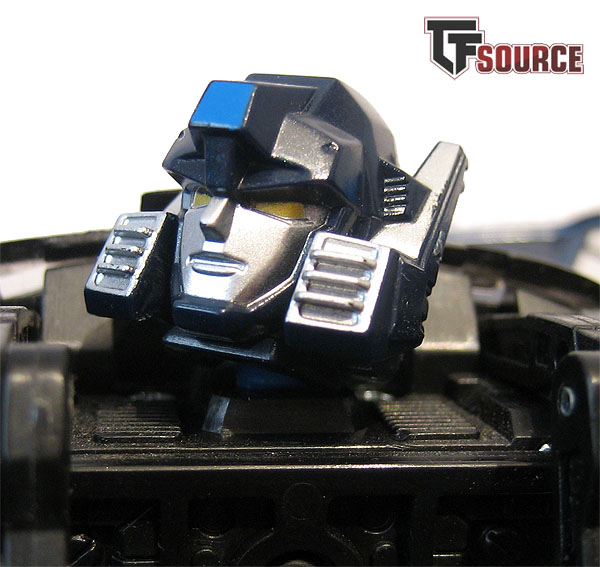 The success or failure of a headsculpt can also be down to small details like choice of colour. Some modern TFs (official and otherwise) suffer visually because the choice of paint is too shiny or metallic for the face, and some of the finer detail, definition and sculpting is lost. Certainly TakaraTomy have taken an interesting path with the colouring of Masterpiece Transformers faces of late, going the fully cartoon-accurate route of using a very matte grey on figures like Ironhide, Bumblebee and Inferno. This has not been to everyone’s liking, but I’ve loved how it’s brought something different to modern MPs. While I recognise that there are superb sculpts among 3rd party offerings, that could be an article of its own for another time, plus I still believe Hasbro and TakaraTomy are the masters of the Transformers headsculpt. So, to the contributions! 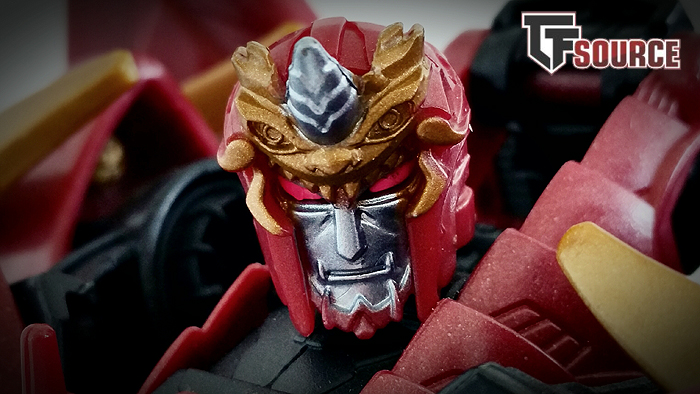 Beginning with Jon Strong of Drinking With Robots, here’s his choice for prettiest face: “This took all of seconds to decide when there’s a unihorned lion puking up the face of the Devil mere feet away from you as the Mazphone pings.

“Go! Budora is a beautiful figure. The colours, the sculpt, it’s the whole nine yards. But that headsculpt, man. Look at it. He makes other bad guys bow their heads in shame after gazing upon such ridiculously ornate evil. Based on traditional Japanese oni, the feline esque helmet is picked out in gold, a single silver horn extending skyward from its crest. Encased within the bridgework of this monster’s maw (even the chin strap packs tooth) is Budora’s grimacing visage and oh man, is it good. With his striking pink eyes blazing, fangs exposed but not in a snarl, this sculpt is a snapshot of Budora in a single moment. And the expression crafted here is one of utter disdain. At what is entirely in the eye of the beholder. To me it’s being forced to share shelf space with ‘bots that just bring down his villainous good looks. This robodemon might be an evil looking bastard but he is an exceptionally handsome one at that“. 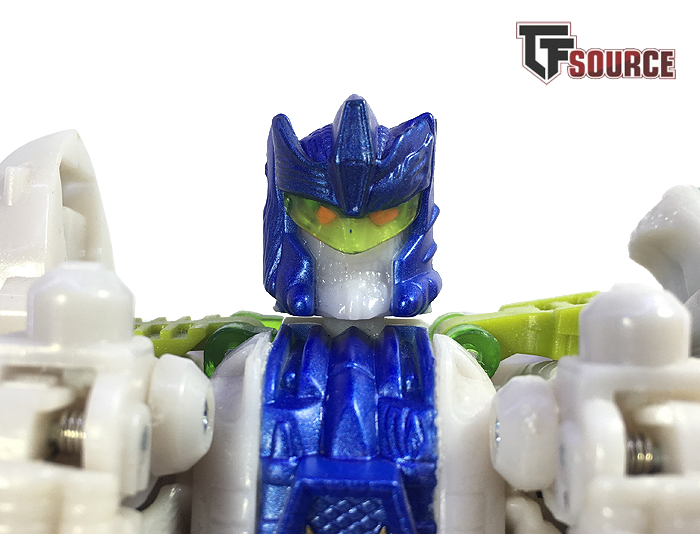 Next up, YouTube Transformers reviewer Peaugh gives us his thoughts on the best headsculpt on an official TF: “Beast Wars Transmetal 2 Tigerhawk. I waffled a bit on which figure to pick, and then saw him sitting on the Beast Wars shelf and that was that. I’ve always enjoyed this head design. The orange eyes pop behind the bright green visor, and I love the asymmetry of the helmet and how it incorporates bits from both Tigatron and Airrazor. The bared teeth are evocative of Tigatron’s more feral aspects, something that was mostly tempered by introspect and wisdom on the show, but works quite well for the toy. He’s a big, stalwart chunk of a robot, and he’s definitely someone the Preds don’t want to mess with!“

I can honestly say thus far the choices surprised me hugely, but Kevin Gorman’s pick is something I would have expected to see on such a list, but again not for the simple reason of “ooh pretty”… 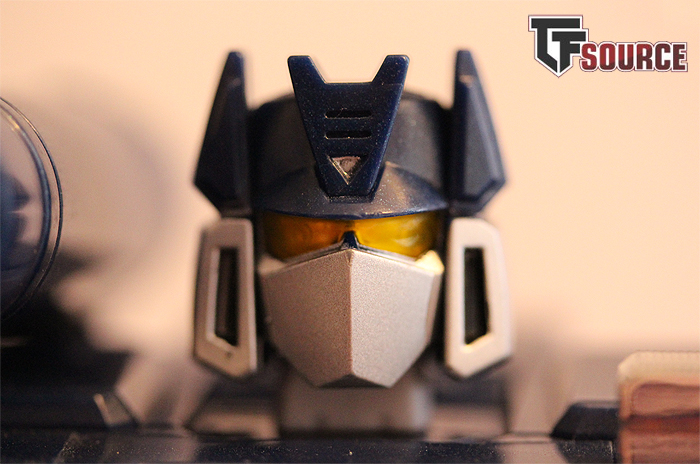 “It was a toss-up between two headsculpts for me. Both were for the same reason. MP-10 Optimus Prime or MP Soundwave. And that reason is The UK Comic Special, The Complete Works Part1. When I was a kid this book was one of the first TF comics I ever got and it helped define what I think about TFs to this day. The cover featured both Optimus Prime and Soundwave in an intense battle above the Earth (how or why they flew up there, I’ll never know as it didn’t have anything to do with the story inside!). As a kid you’re meant to follow the good guys, but Soundwave on that cover has so much ‘badassery’ and he’s blasting Prime right in the face, how can you not love that? Megatron who?? *puttup.

“With the Decepticon logo being based on Soundwave’s original toy head sculpt, it – more than any other – has a lot to live up to when getting a new version, and the MP version nails it perfectly. The headsculpt is a perfect fusion of all the media that came before it that defines G1 Soundwave, taking cues from the cartoon, comic & toy, and executing it perfectly. It just IS Soundwave, the cool-headed power behind the throne that held it all together while other Decepticon leaders fell by the wayside. Being a TF UK comic fan it’s always going to be the Hasbro version with the yellow eyes that wins for me over the red eyed Takara one too. Everything about this entire figure is perfection for me from the Bot mode to the Alt mode to all the tapes. The perfect updated Masterpiece figure in my eyes“. 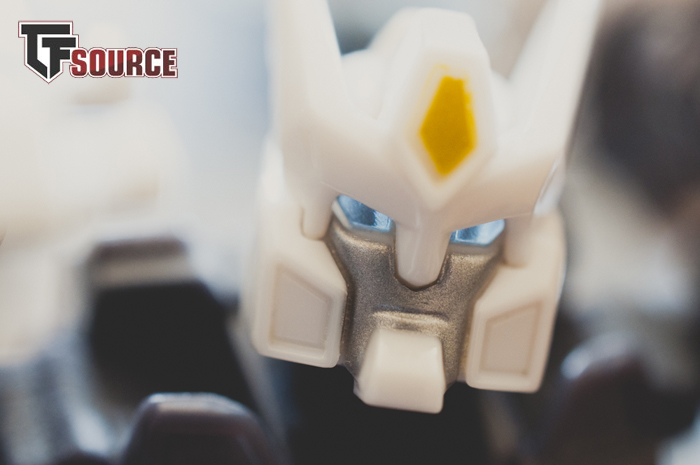 Marian Hilditch of Podcast Maximus chooses Generations Drift after applying a rigorous 5-step assessment! “The question I ask when buying any figure is “Can I see the character in there?”. The answer is especially important to me as a photographer. Head sculpt is everything. A toy is just another model after all and it all comes down to a good portrait. When thinking about this piece and having ruled out Masterpiece (see below), one figure stood out the most. At first I was reluctant to use him because he was such a predictable choice, but every test I threw at Generations Drift he was passing, so you know what? He deserves it. So there. And here’s why.

“1) Closeness to the original. Lack of detail aside, he’s near identical to Guido Guidi’s design, with a slightly rounder nose guard. And a fantastic design he is.

“2) Sharp lines. Here a Masterpiece would win hands down, but Drift holds his own because of both design and colour. The angled, pointy intensity that the character personifies is right there, though Generations plastic does soften it considerably.

“3) The macro lens test! This is a harsh one and where MPs always fail. You might ask, well, if you can’t see the fault with the naked eye, what’s the problem, right? Well, the problem is that once you’ve seen it, you can’t unsee it. Even my beloved MP Prowl failed here and he does have a wonderful, wonderful head sculpt. But the colour application is messy and that black chin is wrong. Paint apps on Drift are minimal, but they’re perfect no matter how close you get. The plastic itself is spotless.

“4) The eyes. I’m a fan of light piping which MPs lack. It brings the figure to life and creates handy illusions (like which way he’s looking). It’s a gimmick, but I can’t praise its usefulness enough. 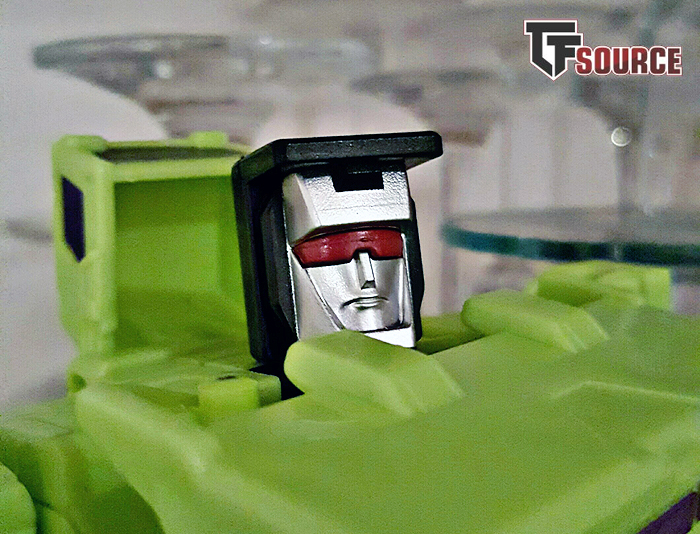 Dan Ghile picks quite a recent release for his standout headsculpt. “I’d argue that headsculpts are still the one area in which Hasbro/Takara are absolutely untouched by the competition when it comes to transforming robot toys. In recent years they’ve really stepped up the game with an amazing standard across all their lines from simple classics to Masterpiece. I’d say that in recent years the Combiner Wars line hit a new standard with Masterpiece level headsculpts across the entire line. My favourite of these is Bonecrusher, whose fantastic sculpt is perfectly elevated by the spectacular silver paint with which the detail is picked out. It’s a gorgeous sculpt that brings out his aloof characterisation. He knows he looks good and he knows he’s better than you. With a relatively bland colour scheme otherwise, it’s amazing how that sculpt and the sharp silver with a slash of red eyeband can do so much to define the figure. It does the very best with Sunbow simplicity and that’s something I wouldn’t normally praise but in this case makes me love the guy even more“. 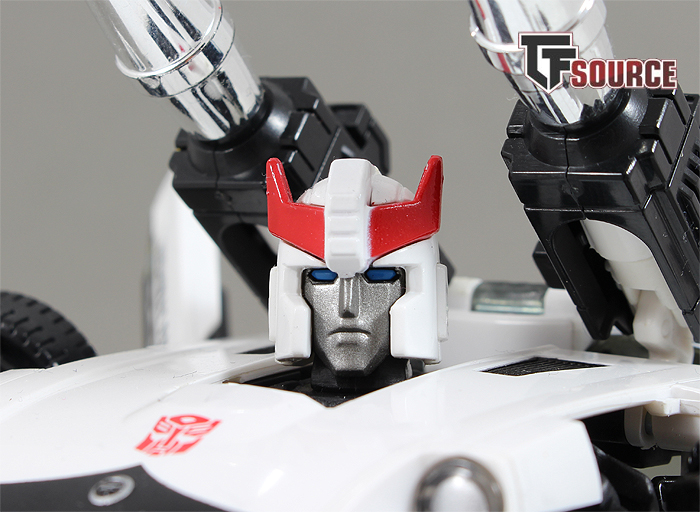 Morgan Evans of Masterforce chooses a figure that nearly came top of the pile for me as well, and for some of our other contributors too: “My choice is Masterpiece Prowl. When I was little my first Transformer that wasn’t a Minibot or a Cassette was Bluestreak and I was amazed by how detailed the figure was, especially the face in comparison to the Minibots. Nearly three decades later and there aren’t many figures that take me back to being a child again but Masterpiece Prowl did it. Seeing that head again brought it all back and although the characters and colours are different, here we were with that same head updated. It oozes personality and is a great reminder every time I see it why I love Transformers“. 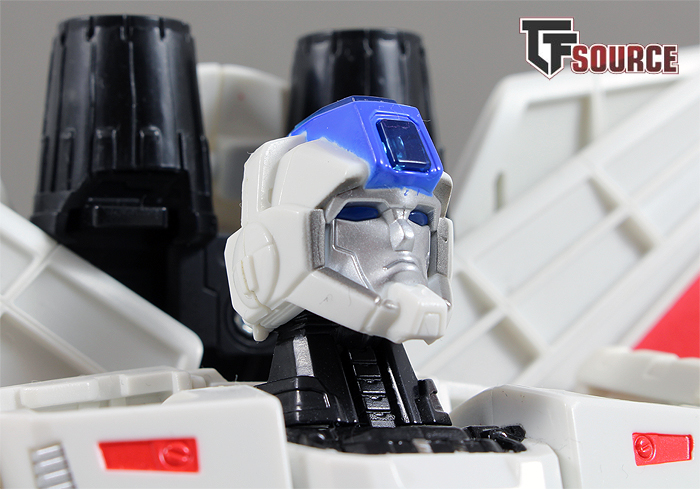 For me personally, it was a clear choice. I considered G1 Highbrow, Alternators Mirage, Car Robots JRX, Masterpiece Prowl and Streak, and even the delightfully micro Fall of Cybertron Eject, but the standout winner was TakaraTomy Transformers Legends Jetfire (and of course Generations Jetfire). I’ve always loved Skyfire’s head sculpt from the G1 Transformers cartoon, and felt the original Classics Jetfire did a wonderful job of capturing his handsome visage. Seeing what Hasbro and TakTom cooked up for the sublime Generations sculpt of 2014 really blew me away. Here was a modern toy that suffered some of the modern maladies of cost-cutting, size class reduction and toy economics, and yet pulled off the most spectacular headsculpt, toppling my previous favourite Masterpiece Prowl. This toy captures Skyfire’s regal dignity, chiseled features and stoic beauty. The perfect Cybertronian-yet-humanoid face of a hero. Then they only bloody went and made the Macross/G1-inspired helmet utterly gorgeous, giving me the mother of all display headaches!

It’s a headache I’ll gladly accept with any new Transformer, though. There’s nothing like a fantastic headsculpt. 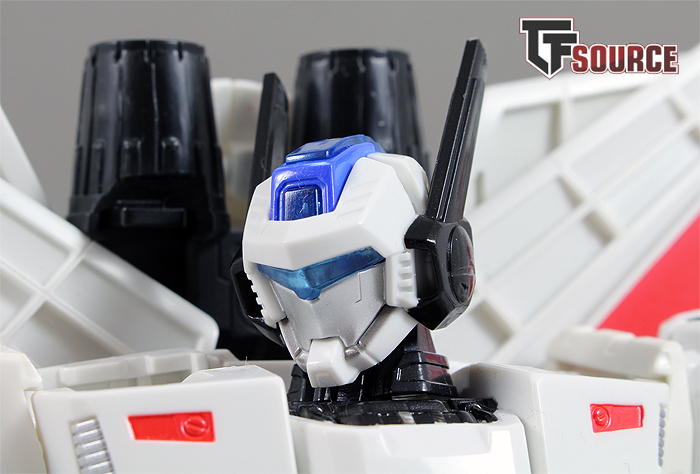 Many kind and gracious thanks to the contributors who answered the last minute call; Jon Strong, Peaugh, Kevin Gorman, Marian Hilditch, Dan Ghile and Morgan Evans.