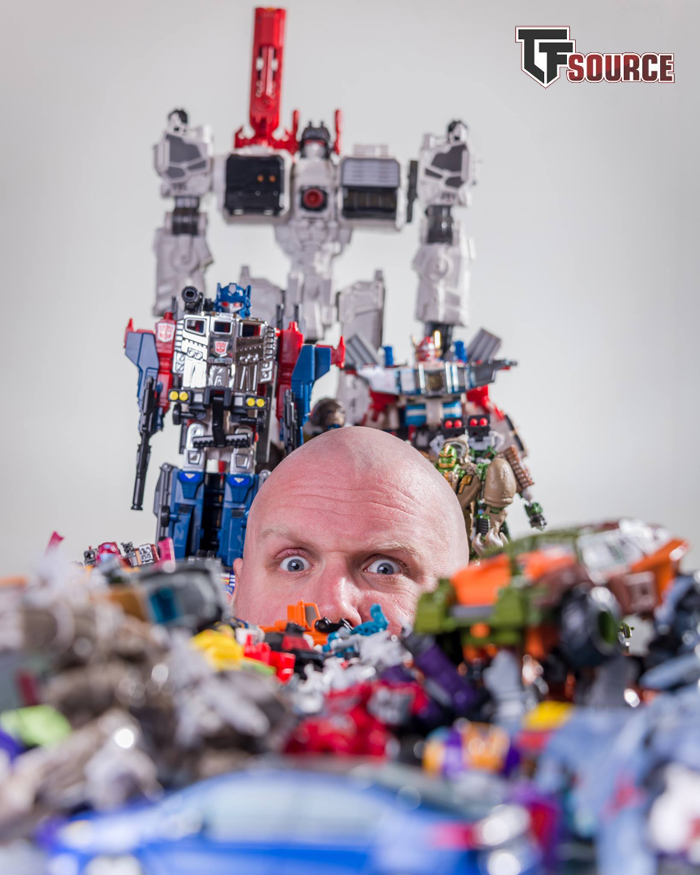 G1 and Generations Transformers from TFSource

I’ve been looking forward to this ever since he agreed, I know you have too. So here it is, Thew’s Awesome TFSource Collector Interview (interthew?)!! Matthew Adams has become well loved and well known in the Transformers community thanks to his unique, entertaining and justifiably-named ”awesome” YouTube reviews. In this interview, Thew’s responses channel that same infectious energy, positivity and delirious love he has for Transformers that you’ve come to expect from him on YT.  From an epic Skywarp shelf to a gallery of gifted beauties, Thew takes us through his eclectic mix of lines and styles. 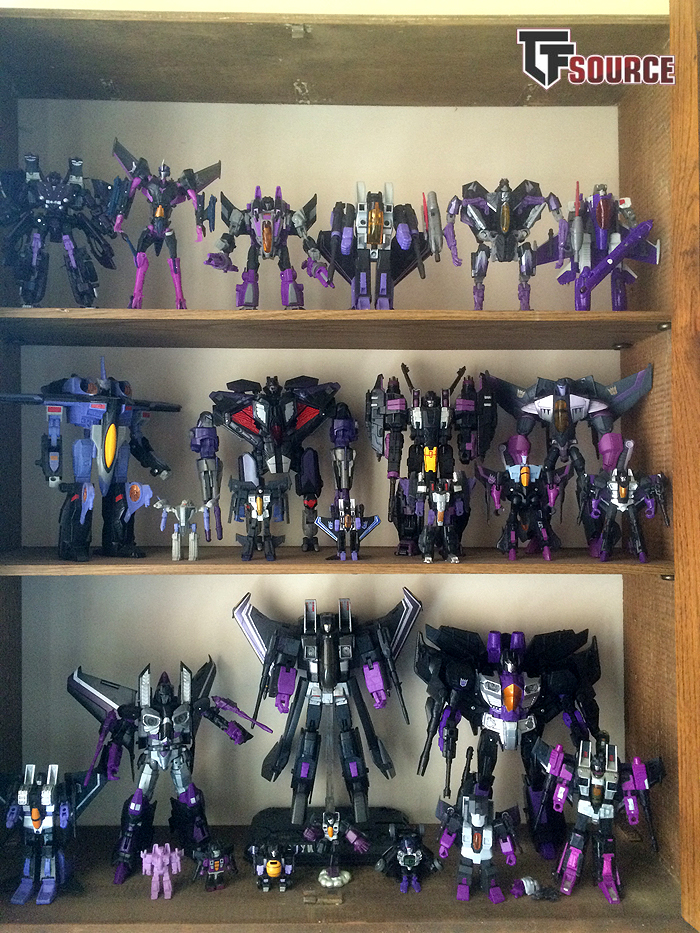 My name’s Thew! I’m best known for my daft Youtube show where I crack wise about Transformers. It’s a hell of a trip and it’s taken me on a ten-year collecting whirlwind through the length and breadth of the toyline’s extremes. These days I mostly focus on the G1-style Generations and Masterpiece toys, but that’s probably just because that’s what’s hot right now – honestly I have a huge fondness for Transformers in all their forms and there’s space in my heart for almost anything! I also have a soft spot for knockoffs and wannabes from elsewhere in the robosphere. 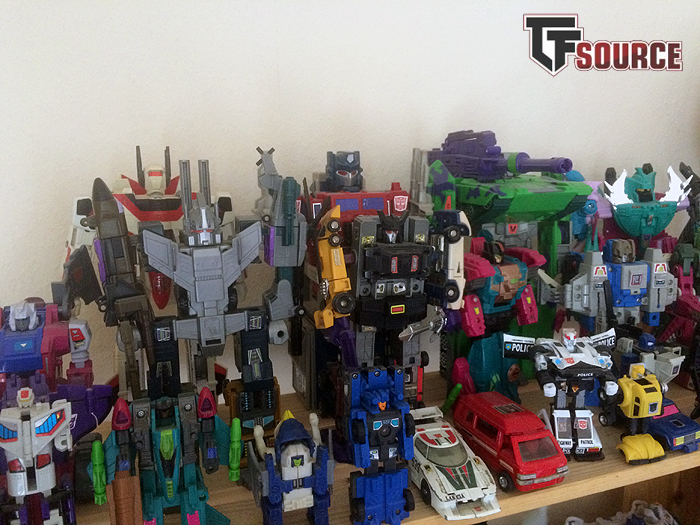 I don’t know how qualified I am to give a definitive answer to that, so I’ll just give you my angle on it! I first began collecting in earnest around 2006 with Alternators and the first few waves of Classics, and at that time – at least by my perceptions – there was a lot of renewed interest in G1. Dreamwave had not long come and gone, the IDW Infiltration run had begun, the original MP Optimus Prime was in stores, and it was all kind of cosy and nerdy – then of course the movies came along and all of a sudden my new hobby was super-mainstream. There I was scouring eBay for Menasor parts and prices seem go totally nuts on me – I’d sold my childhood Pounce and Wingspan set for £19 before the first movie hit, and now I can’t find a set anywhere for less than all of my bone marrow. 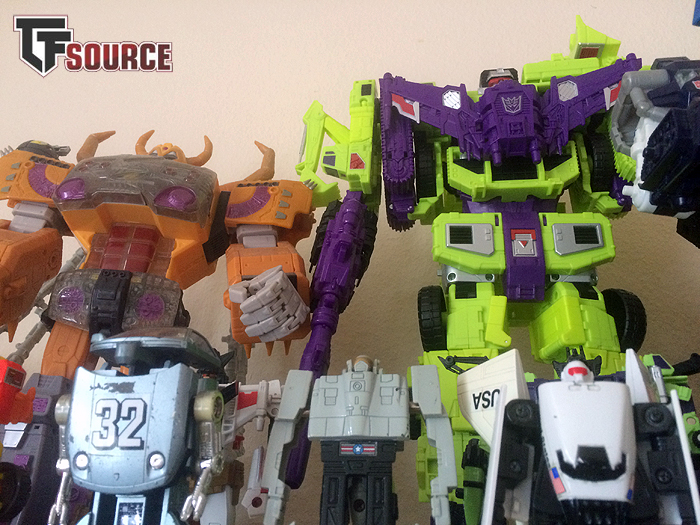 Since then things have come and gone – I feel like people are largely sick of the movies, Beast Wars rears it magnificent head periodically, and I think everyone has a secret crush on the Unicron Trilogy, but as far as I’m concerned G1 will always be where the heart is. It’s amazing how new audiences keep climbing on board too, like from the comics – it’s a hell of a party and it makes the whole thing a much more interesting experience!

As far as how things have changed, I think there’s mostly just more of everything. There’s more variety in toys than ever before, there are more options for collectors to get exactly what they want – particularly with third party items, upgrade kits, Reprolabels – and the amount of creativity and customisation in our community always impresses me. And for me personally, the main thing that’s changed is that it’s more fun than ever! 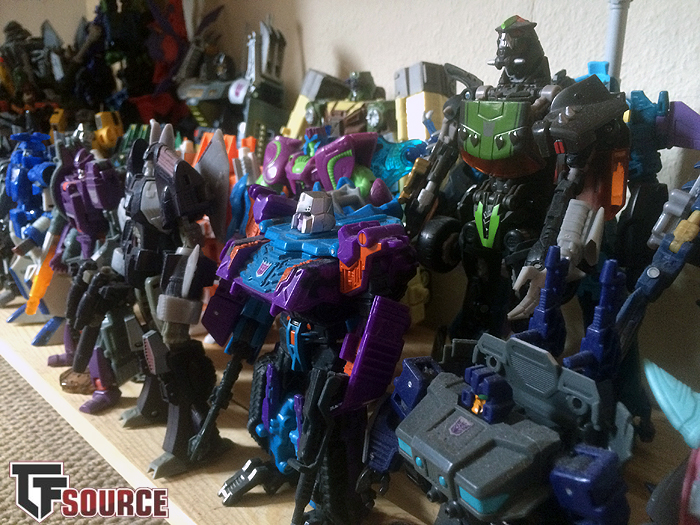 That’s an interesting one! Honestly I can only see it getting bigger and more deliriously excitable. The Transformers brand seems to attract a certain kind of person – I mean I’ve met all kinds of different folks from the fandom, but we all share that certain giddiness when it comes to robots – and there’s enough love among us for folks to stick around.

Moreover, I think the third party bubble has to burst at some point. Over the next five years I would hope we’ll have exhausted every possible variation on the damn Constructicons and Dinobots, and these companies will have to evolve to stay alive! I’d be surprised if people continue to be impressed by super-huge toys and yet more damn Masterpieces, so I hope to see a few original properties emerge. There’s creativity and there’s capital, so whyever not? Get yer brains out! 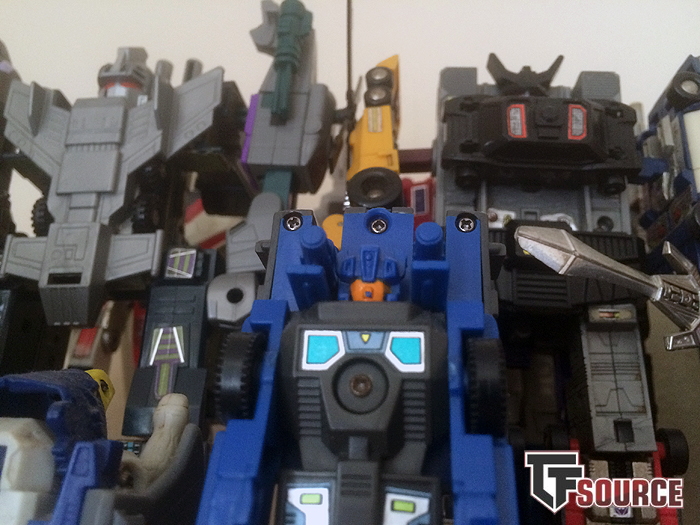 But I think what will make the biggest difference is what Hasbro chooses to do with the brand. After all, they’re leading the way – and whether that’s just diving back into slightly different pockets of the eighties, like Combiner Wars and Titans Return are doing, or taking everything in a whole new direction – I’m stoked to be along for the ride. 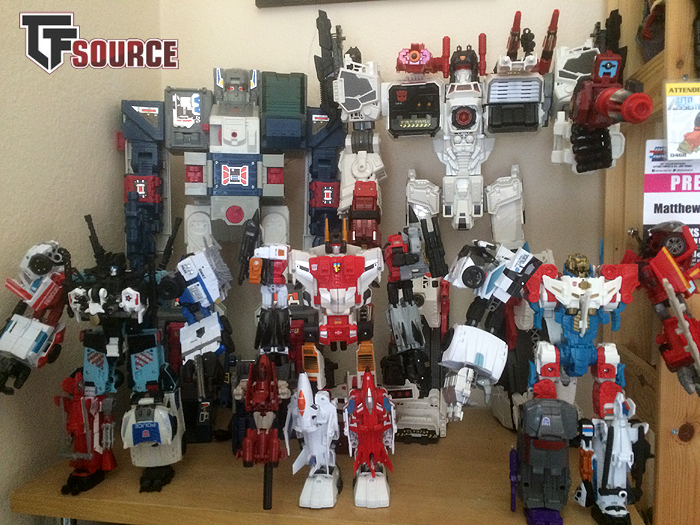 Well, I owe almost all of my success as a collector to my lovely viewers!! I’m lucky enough to have received a staggering amount of prezzies – in fact most of the “big ticket” items I own have been gifts from people who just want me to enjoy them as they have. Some of the crazier ones include Cybertron Primus, Energon Omega Supreme, Generations Metroplex, Armada Unicron, Energon Tidal Wave, and a friggin’ mint-in-box G1 Sixshot, as well as numerous boxes of dozens of Beast Wars, Masterpiece, and Cybertron figures – but the crown simply has to go to the Encore Fortress Maximus given to me last year. That’s an insane amount of toy to give up and a monstrously wonderful thing to receive! 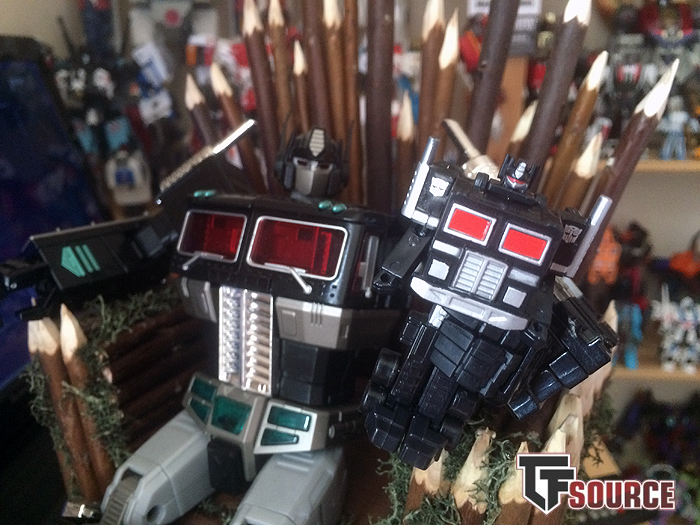 I feel like I should point out that it’s not lost on me how weird and awesome this is. Every day I’m grateful for all the fabulous things people do for me, and I barely deserve it. I’m just a fat idiot with a Youtube, and the only lame thing about it is the fact that I simply haven’t had time to make more videos about them. Life gets in the way, but I’m doing my best to punch through! I’ll meet you halfway one day, I promise. 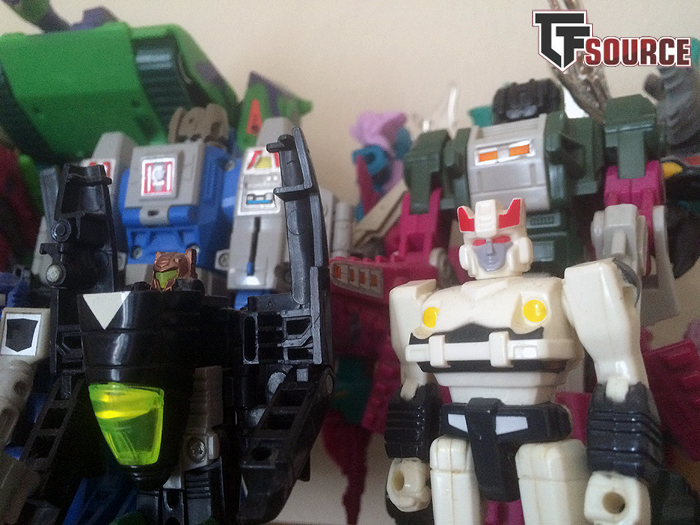 See above, I guess! I’m not sure, man. I’m always stunned by the Mapes’ collection. Those guys have some insane swag, but I don’t know if there’s anything crazy about it – they just stuck at it and got their wallets dirty! I do vaguely remember seeing a photo of a guy who found like four Predakings and a Fort Max in some old lady’s attic and paid her ten dollars for the lot, but that might just be bull honky. 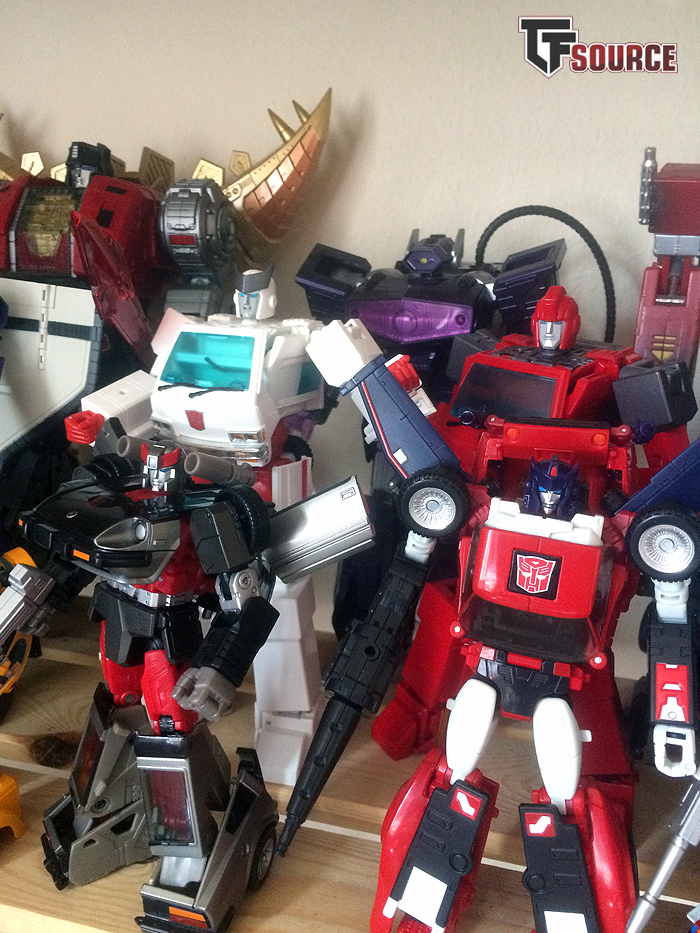 Man, right now I’m thinking it’d be Masterpiece Ironhide. It’s probably just because he’s new, but damn, that thing makes me feel all kinds of ways. I’ve always been a fan of Ironhide and it’s been incredibly frustrating to watch him get lame toy after lame toy over the years. This thing satisfies every aspect of my collecting personality – it looks good, feels great, works well, captures the nostalgia magic, and I feel like it’d probably scratch that itch well enough even if I absolutely had to give everything else up. But don’t take that as carte blanche to send the boys round, okay? 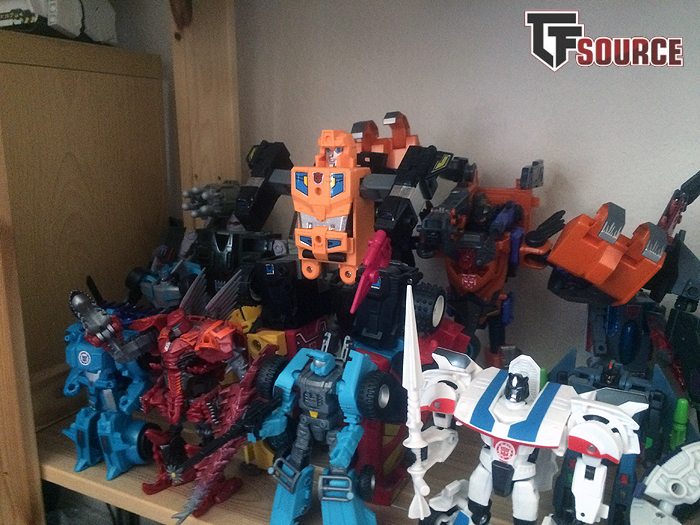 I actually very rarely get jealous of people’s stuff! I often see cool toys in people’s collections and think, “Yeah, I should get one of those” – I don’t think “I should get HIS one of those”. Having said that, at one point my bud Colin had two Botcon G2 Clenches, and I found myself wondering if he’d notice me sneaking one out the door. That guy’s collection makes me sweat any time I see it – I challenge anyone to gaze upon friggin’ Big Convoy, Black Big Convoy and Ultra Mammoth all in a row and not do at least a pinch of weewee. 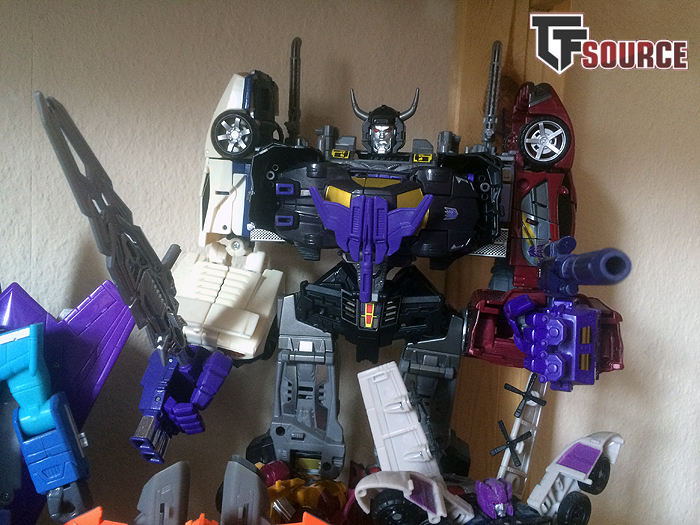 I think the most important thing any collector can do is decide what you want your collection to look like! Because no matter how focused you may be on building any particular display, there’s plenty of shiny stuff out there that can distract you. Toys are wonderful and they’re immensely tempting and you can easily find yourself with a house full of plastic and a hole in your pocket. I mean, my collection’s a hodgepodge of all kinds of crap because I’m a scatterbrain with a compulsive streak and generous viewers, and I’m constantly grappling with the “where am I gonna put this” scenario. So what I’m saying is, I suppose, don’t be like me! Just find the toys that really speak to you, prepare your wallet for a clobberin’, and dive on in! 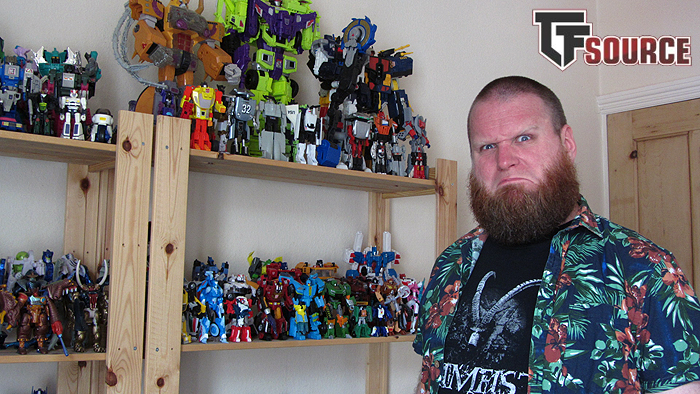 Many kind and gracious thanks to Thew for words and photographs, and to Nick Hardy for the opening photograph.