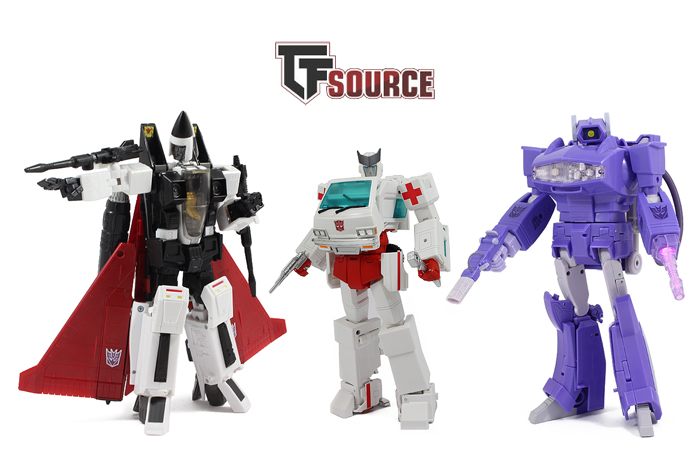 Masterpiece Laserwave, Ramjet and Ratchet are here (mostly). The line has obviously evolved not just from where it started in 2003 with MP-1, the ultimate expression of a G1 Optimus Prime, but also since the reboot of MP-10 Convoy. Different designers from the same team have been allowed to make their mark on the flagship Transformers toy series, and the MP offerings in 2016 have pleased some more than others. We’ve already looked at MP-27 Ironhide and MP-28 Hot Rodimus in detail on this blog, so this week allows us a brief look at Ramjet, Ratchet and Laserwave, examining some pros and cons of each figure. 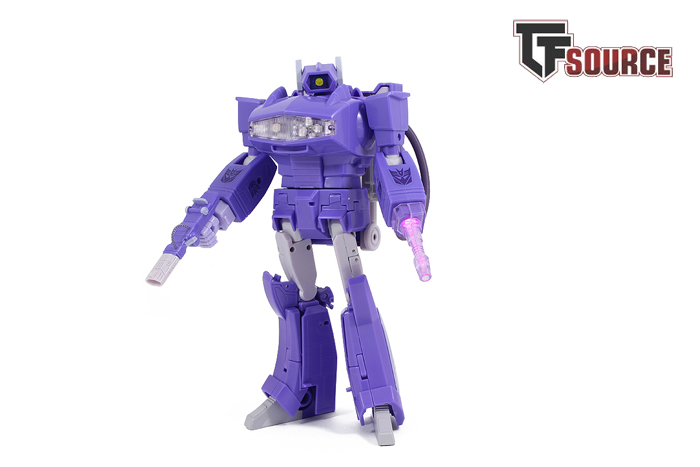 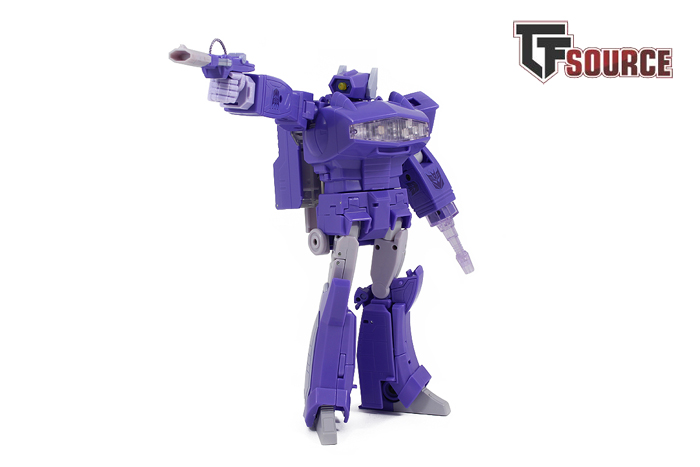 Starting with MP-29 Laserwave, much has already been said online about how it compares to Cloud 9 Quakeblast and FansToys’ reissues of Quakewave. On the whole, the difference in preference stems from size, colour and preferred media representation of the Shockwave character. Marvel US/UK lovers seem to prefer the Quakeblast/Quakewave aesthetics, size and bulk, whereas cartoon-centric collectors prefer Laserwave. My only exposure to Shockwave as a child and even well into my adult Transformers collecting came from the G1 cartoon, so obviously the aesthetics of MP-29 were the most immediately appealing. The colour – to me – is a delightful pastel purple in hand, the transformation is far more enjoyable than that of the other two – as well as repeatable. I’ve already transformed MP-29 more times in the one month of ownership than I did Quakewave in 3 years of ownership. 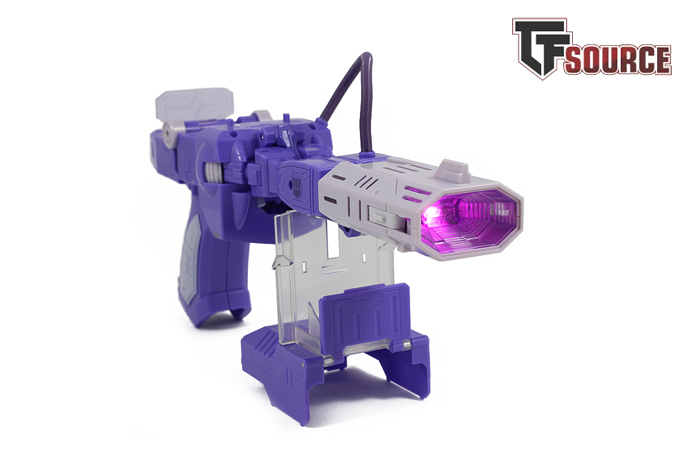 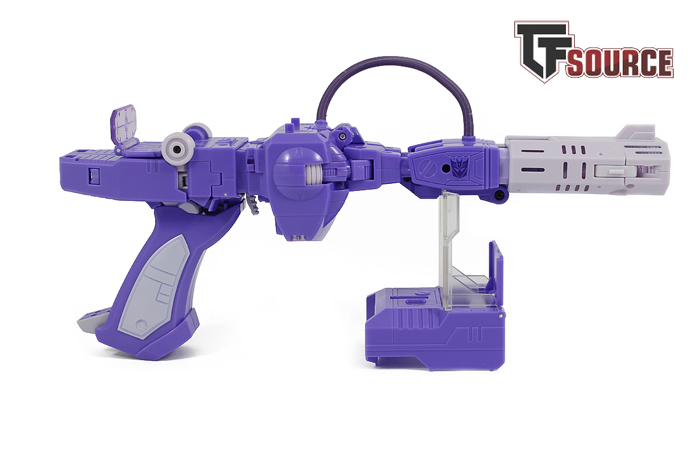 I have not suddenly stopped loving Quakewave, it’s not suddenly stopped being a terrific figure. It is still more stable and posable than Laserwave, it has the lovely electronics for the eye and if bulk/heft is your thing, he delivers well. There is also a greater choice of colour for Quakewave, with FT offering the clear version, the purple of the original release and a more G1 toy-style purple as well. Quakeblast is a wonderful thing too, great size and even more mean-looking than Quakewave. Those large feet are not an issue in hand and the light-up chest is superb. It’s a shame the LED in the cannon is yellow instead of purple, but a few bright sparks could surely modify that. Its conversion is based on Quakewave so I’m not a huge fan of it in that respect, but I was impressed with the feel of it, the height and the value for money! 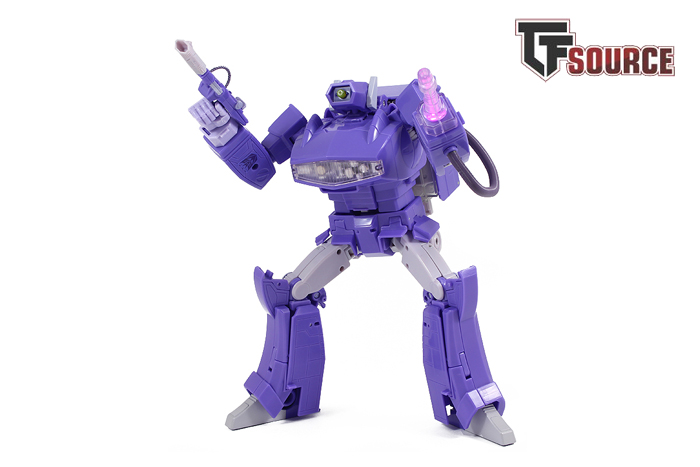 Laserwave, though, is my Shockwave of choice. And it’s a feeling I had on first handling. It is an utter delight to transform and completely intuitive. TakaraTomy have come up with the best solution for the cannon arm as it can be rotated to have an under-slung or over-slung hose, with no dis-assembly, extra parts or resulting lack of electronics. About that hose, what an excellent little slinky-style thing it is and so easy to clip on or detach. It is so user-friendly and demonstrates the superior solution. The electronics in the pulsing purple lights for cannon mode and robot mode are fantastic and hypnotic, but sadly there are no LEDs in the head, so you must make do with light piping. He is shorter than both 3rd party offerings, and coupled with his pastel purple colours, that has put off quite a number of collectors. Posability is limited on Laserwave, and with extreme leg angles he does not stand up too well. Having accepted that, due to his looks, fantastic leg transformation and sexy electronics, I was good to go with my new MP Shockwave. It took me all of one day to relegate Quakewave out of the MP display, but I do not expect this to have happened across the fandom, it’s just that MP-29 perfectly meets my needs and I rate it as the second best mould of 2016 that I have purchased so far, official or otherwise. Online polls on Twitter and TFW have shown that a significant majority prefer MP-29, and the second place votes were equally split between Quakeblast and Quakewave. I remember a time when I did not believe TakaraTomy could improve on the brilliance of Quakewave, and I wager I am not alone there. 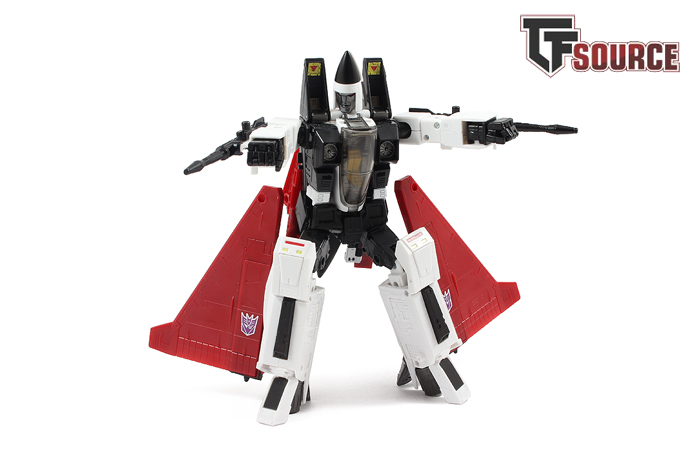 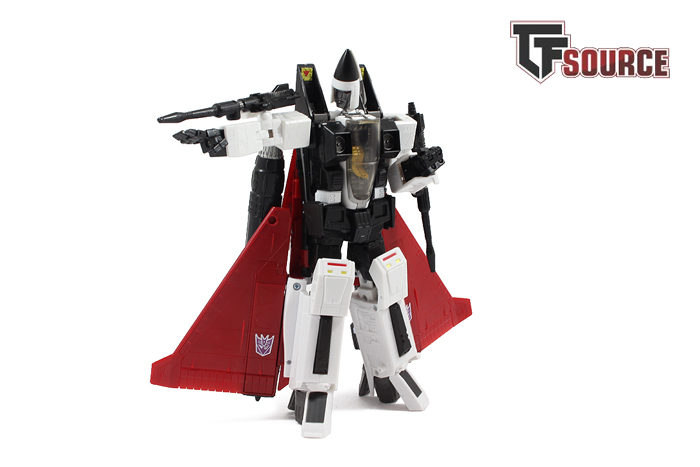 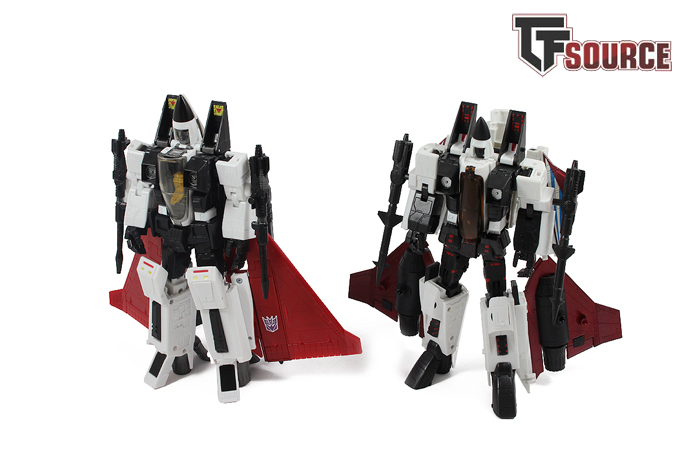 Next up is MP-11NR New Destron Warrior Ramjet. I still cannot quite believe this has happened, a Masterpiece Ramjet. Nearly all of my original G1 VHS tapes featured Coneheads heavily, and I had all the Decepticon jets as a kid except Ramjet. Instead, Ramjet was my very first ever online purchase, bought from Digital Toys in 1998. I have owned so many variations of G1 Ramjet over the years – US G1, Mexican G1, Ceji Europe G1, G2 desert-camo prototype – so this is HUGE for me. I was sad to hear of all the QC issues people were having with missing rockets, duplicate left or right parts on the cluster bombs, shoulder clips, waist flaps etc, especially as the TakaraTomy mall exclusive nature of MP Ramjet meant it was extremely expensive. When you factor in the lack of display stand or any extra accessories beyond his traditional toy/toon weapons and a transparent pilot, you can see why there are so many complaints. 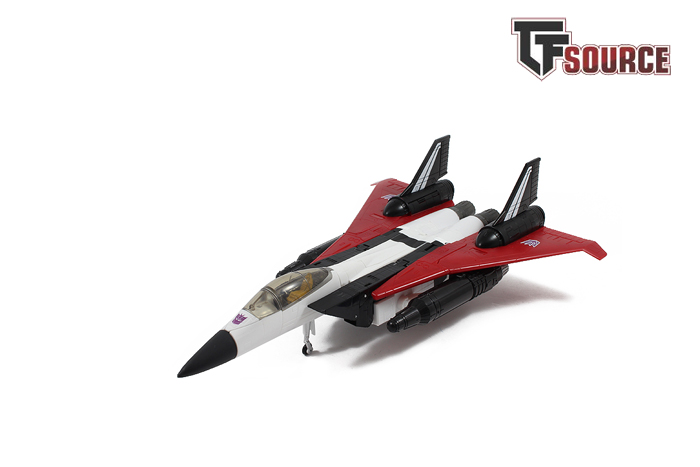 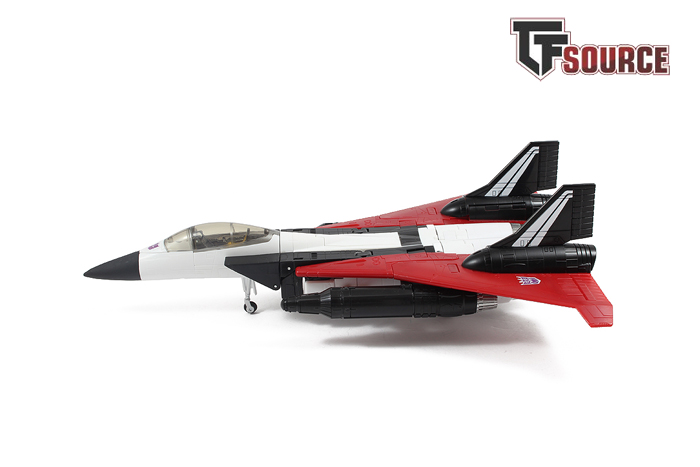 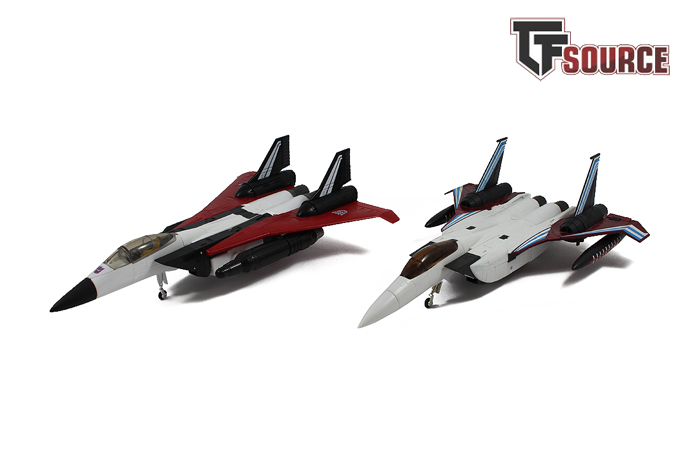 On the plus side, TakaraTomy have successfully retooled the mould to include a faux cone head, a rotating canopy to accommodate the new transformation and look, flip-around thruster halves/Decepticon wing logos and those giant knee pads which he had in the show. Aside from the slightly large nose and lips making that face hard to love, I feel that this is the visually perfect cartoon Ramjet I have craved since my childhood. OK, the jet nosecone hangs off his back and the fuselage top no longer plugs into it, he can’t rotate his head much in either direction due to the obstruction of the shoulders and the flap hiding the landing gear is simply useless. In actual fact, the one you see pictured here has two duplicate shoulder clips instead of a L and R version, meaning transformation is a bit difficult but it works and holds together in both modes. 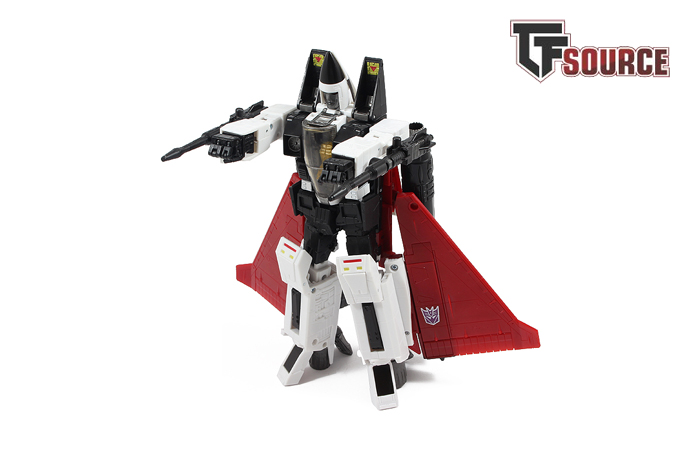 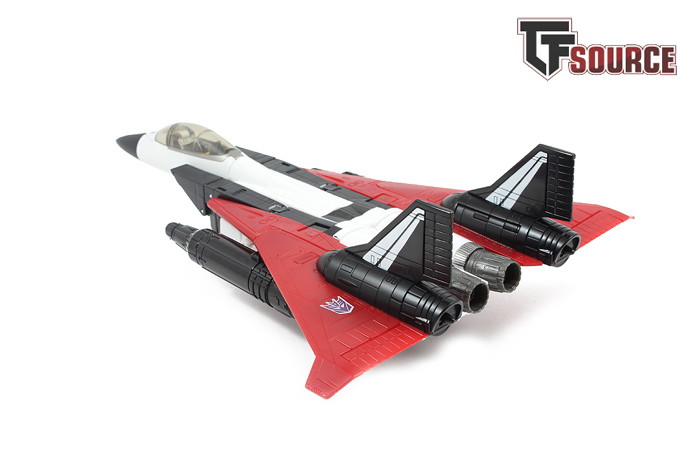 Compared to iGear Ramjet who was based off the MP-3 mould, he is far more show accurate. I found the iGear figure to be gorgeous in jet mode but the lack of black nosecone bothered me. The wing shape wasn’t as nice as MP-11NR either but the metal in the landing gear and the metal flake G1 toy colours on the wings were superb. MP Ramjet looks utterly tremendous and gets me right in the heart, a dream come true. An actual Masterpiece Ramjet. For all of those, though, who have duff parts and are not able to get replacement parts or figures, that’s just not the case and it simply is not good enough from TakaraTomy. 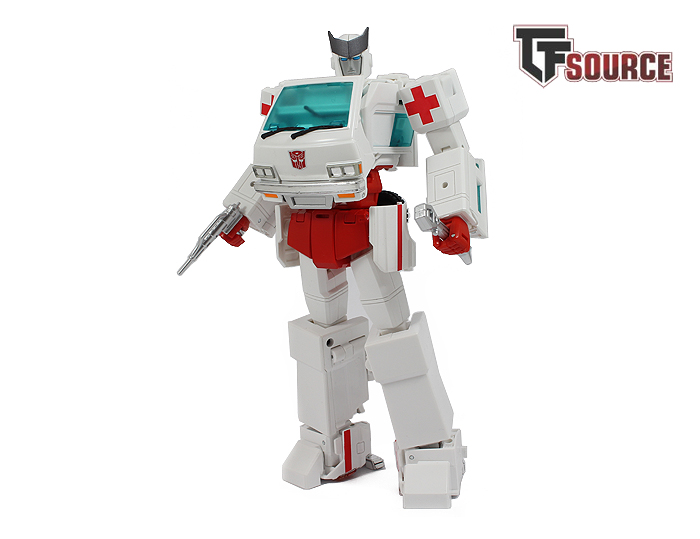 Finally we have my absolute and clear favourite new mould for 2016, the TakaraTomy Masterpiece Ironhide/Ratchet sculpt. Ironhide was brilliant, and Ratchet – arguably – looks even better. As soon as Ironhide was in collectors’ hands and they discovered what a special mould it was, the excitement for Ratchet really increased exponentially. In hand, he’s a very brilliant white due to many painted surfaces. With the nature of this toy’s intricate but fun transformation, there is a certain degree of surface rub, and when I was done taking the photos for Ratchet, my lap was covered in white paint flakes. Maybe they need to be left to cure longer from the factory or extreme care needs to be taken to come up with a transformation strategy reducing all surface rub, but it is not the same experience as Ironhide. I still feel as though I can give MP-27 as much abuse as I like and it comes out just fine. MP-30, though, requires care and this discourages one from interacting with it. 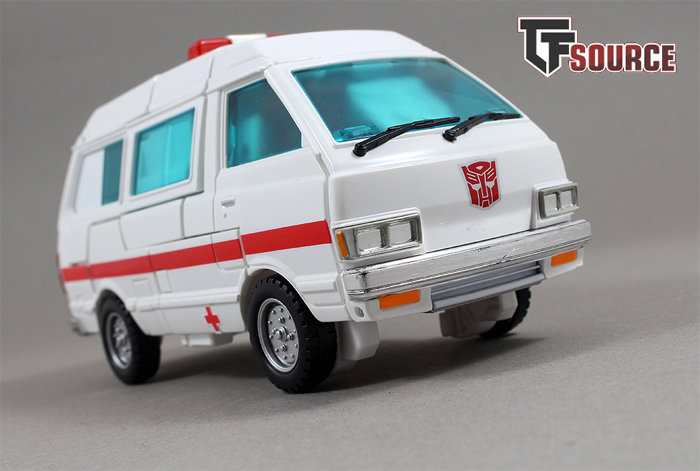 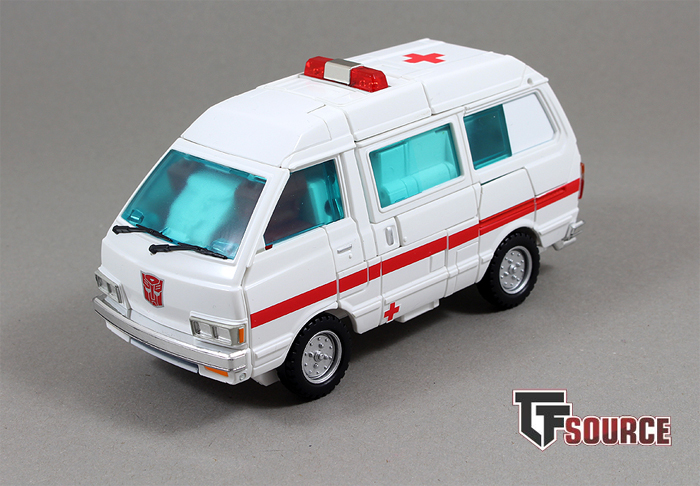 The sticker sheet is a nice touch, and Takara Tomy have figured out a nice way of allowing collectors the use of the Red Cross symbol without any legal ramifications. Cutting out the small red squares in the corners of the B-stickers on the sheet allows one to achieve a G1 toy and cartoon accurate Ratchet, but man it’s precision work for people like me. Up close, it’s a mess on my figure. I think I may eventually have to peel them off and go with reproduction Red Cross stickers that need no cutting. I am pretty disappointed with how my efforts came out, but that’s on me. From a distance I guess it’s good enough. Laserwave has similar choice for the sticker sheet, but the application of those went much better. I like stickers as options but if we are going down the route of having to apply them in order to get an accurate toy or show look, I hope in future they are not as easy to wreck as Ratchet’s. If you are going to use a scalpel/Exacto knife, make sure it’s bloody sharp! 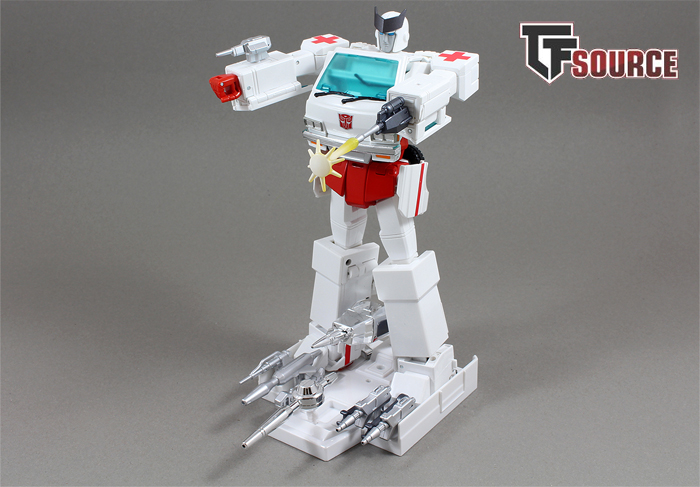 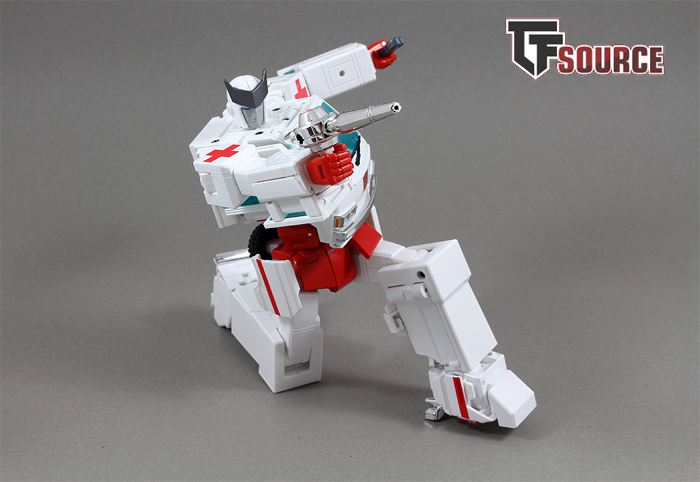 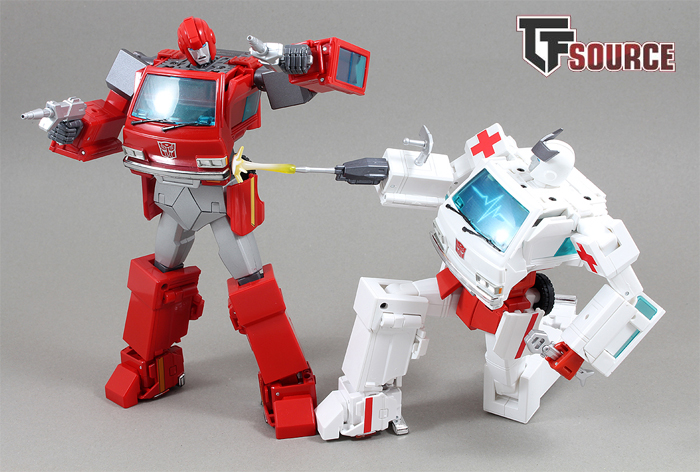 Positives, though, Ratchet has plenty. A fantastic array of accessories allowing for endless display and play options mean this is another character I never need buy again. This is the definitive cartoon Ratchet, and I hope the comic lovers get their red-headed version (and correct waist etc) somewhere down the line. The way the sirens can be pushed down and stored for compatibility with the MP-10 trailer is great, but I do recommend using clear nail polish or floor polish to protect that chrome. The chrome areas on my MP Ironhide and Hot Rodimus look terrible now. I edited all of these photos to the TFTM soundtrack (specifically “Moon Base 2 – Shuttle Launch”) which I found poignant and spine-tingling. These Masterpieces have so much character in them from the cartoon that I can hear the voice actors’ words coming from these toys, I am inspired to recreate iconic scenes and these toys make them look great. With all of them I enjoy playing with them, transforming them, posing them. I’ve decided to forget about flaking paint and wearing chrome. Trite as it sounds, life is too short to allow that to stop me enjoying these toys and funds certainly don’t allow for display multiples. Ratchet, Ramjet and Laserwave are flawed beauties, but that beauty and play value is just so high for me that I am forced to overlook the negatives.

After all, this is not our first time round the block with flawed Masterpiece beauties… 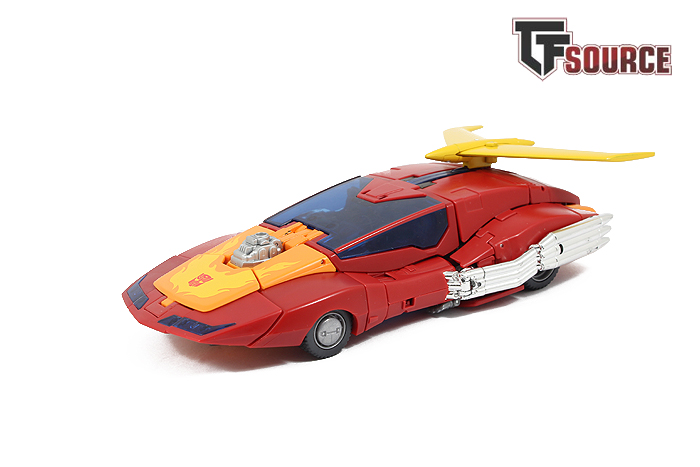 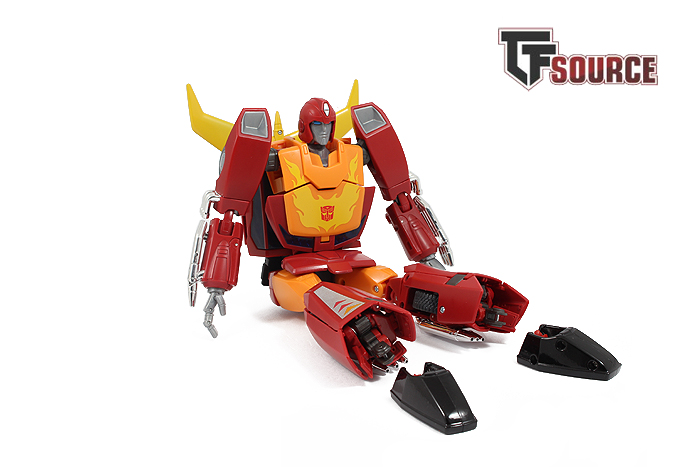