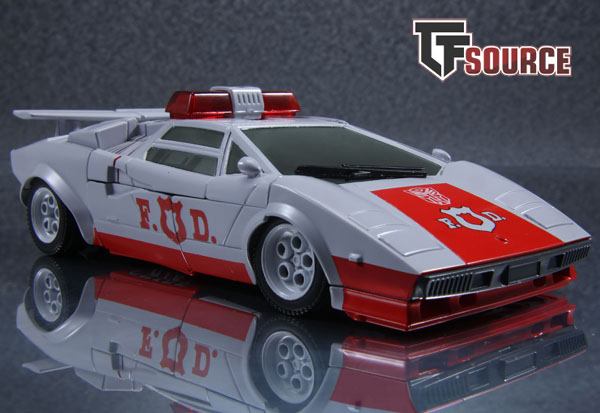 TakaraTomy have just announced their latest Masterpiece Transformers addition, MP-14+ Alert Anime Color Edition. Instead of a straight up reissue of Masterpiece Red Alert, TakaraTomy have repainted MP-14 to closer match its on-screen representation in what has been a quite divisive strategy. While some are pleased to be able to get Masterpiece Alert at what they hope will be less than second hand market prices, others are concerned about the implications of this new Anime colour initiative by TakaraTomy.

For a start, MP-14+ may not actually end up all that cheap compared to second hand MP-14 value because it is being offered through TakaraTomy Mall as an exclusive. Even if MP-14+ does get the expected Hasbro Asia treatment, it’ll be priced more in line with things like MP-14C Clampdown as opposed to a mass release car robot like MP-25 Tracks or the MP-12 Lambor reissue. Secondly, the choice of deco may not actually appeal to those who wanted to add Masterpiece Alert to their collection in the first place.

Instead of the brilliant white and metallic silver in vehicle mode, Alert Anime Color Edition is a slightly dull grey to match the animation model seen in season 2 Sunbow cartoon episodes of The Transformers. In addition to that, the authentic Lamborghini Countach headlights on the hood and front bumper have been painted over, so the designers have moved one step away from real life vehicle accuracy and one step closer to the more simplified season 2 character models. You may also notice that the Autobot symbol on the hood is now the simplified cartoon-style sigil instead of the more defined and signature toy-based logos we’ve seen on Transformers toys for decades. This little feature first premiered on MP-29 Laserwave’s Decepticon insigina sticker sheet as an option for collectors who wanted to make their Shockwaves look as screen accurate as possible. 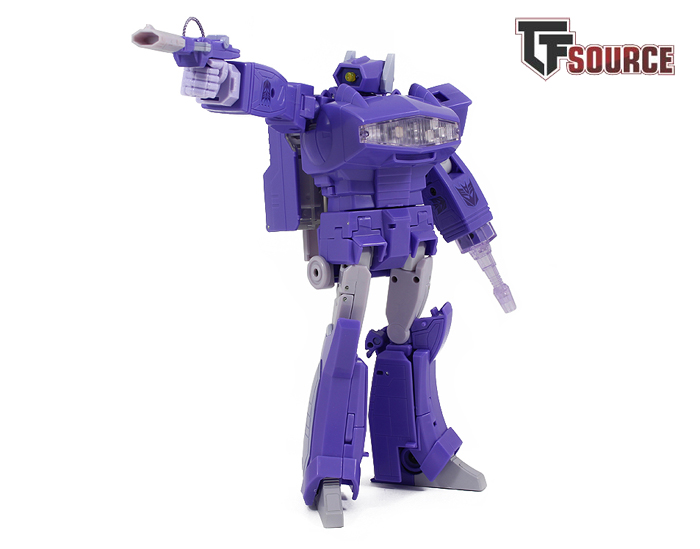 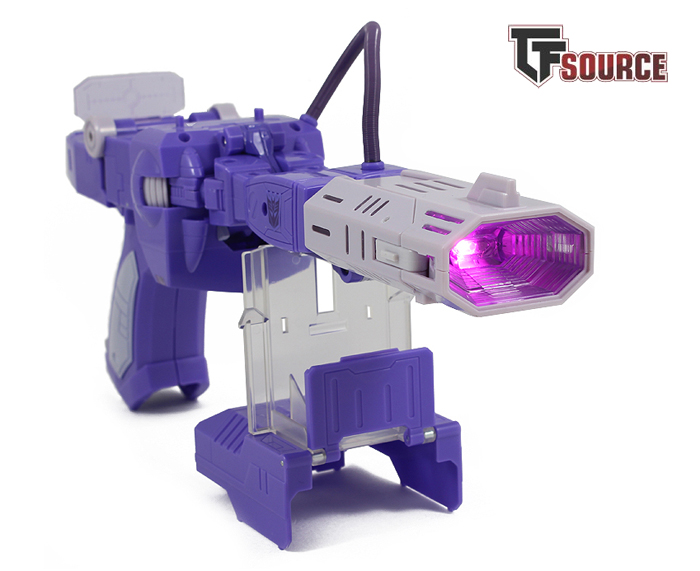 MP-29 Laserwave himself has come in for criticism from some quarters of the fandom for his colour, a lavender-like hue that closely matches his on-screen appearances. Some collectors still feel that Masterpiece Transformers ought to represent the definitive version of a character, taking strong cues from the cartoon but also incorporating significant influences from the toys and, where possible, the comics. Being completely slavish to the cartoon aesthetic has made some question the direction of the line, and an increasing trend towards 100% cartoon accuracy brings us to our first implication. Will TakaraTomy now make upcoming MP figures stand out from the previous releases by using primarily screen accurate colours as opposed to what might look better, or might be more realistic to actual vehicles? 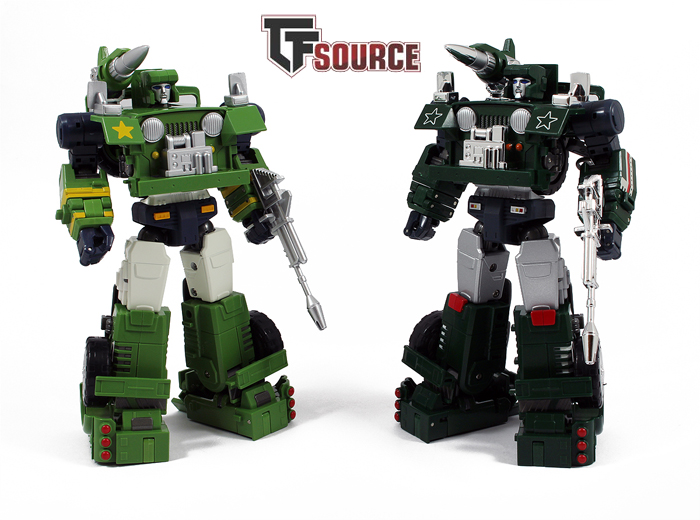 TakaraTomy have already done that once with the MP-10 reboot of the scale and aesthetic/concept of Masterpiece. This has been touted as a soft reboot, but for the time being MP-14+ is just a slightly expensive exclusive. No doubt TakaraTomy will be seeing how it performs and whether or not other Masterpiece figures could be offered this way. If we count the TF Expo faction-free Mp-12 Lambor exclusive, MP-14+ will signal the 7th use of this mould at a time when most of us would probably have preferred a Diaclone “Deepcover” repaint or maybe just a straight up MP-14 reissue. It now means we probably have to wait until MP-14+ sees release in September before getting any further announcements for future uses of the Countach mould.  If TakaraTomy decide to give more Masterpiece toys the Anime Color treatment, that has further implications. 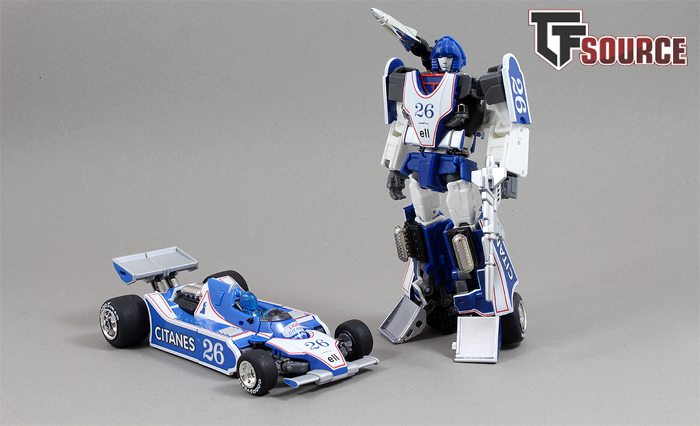 One possible outcome is that they will simply go back and reissue a stack of the more popular Masterpiece figures with more screen accurate decos, things like Optimus Prime, Starscream, Sideswipe, the Datsuns, Soundwave etc. Masterpiece completists will shudder at the thought of re-buying a stack of expensive figures so that they will line up more uniformly with upcoming releases who may or may not sport Anime Color Edition designs as standard. Alternatively, TakaraTomy may go the route of 3rd Party companies like MakeToys and Ocular Max, releasing both toy and toon versions simultaneously or consecutively. Some are happy to pick and choose a particular design or deco for their collection on a case by case basis, but I wager a majority of Masterpiece die-hards will crave uniformity, and that uniformity does not automatically equal cartoon accuracy. Also what does one do if TakTom decide to continue with the current concept and not release Anime versions immediately? Do collectors hesitate and wait for an announcement of a MP-xx+ version somewhere down the line? 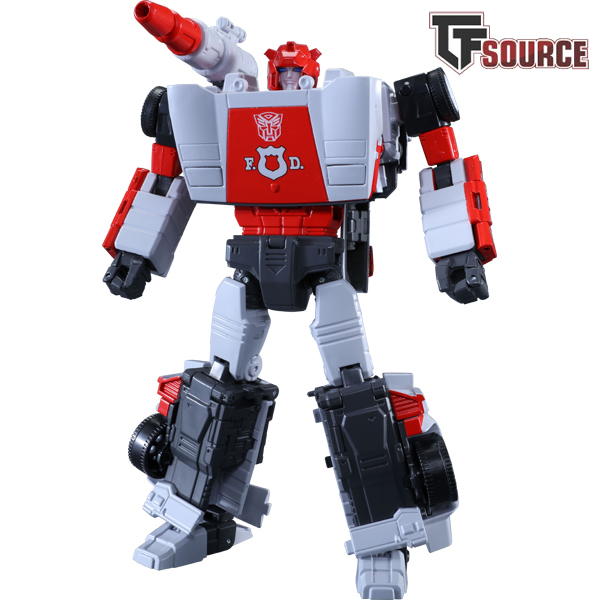 Another question being asked of MP-14+ is whether the changes are that significant anyway? We can see that the red thighs of the toy Red Alert are gone in favour of screen accurate grey, and the feet are no longer silver but resemble the animation model. Blue detailing on the shins, a leftover nod to G1 Red Alert, now gone. Lamborghini Countach lettering on the rear of the vehicle is missing and the badge on the hood is missing manufacturer details. Some have said the face now pops better in these colours, but that depends on your own personal preference, maybe you preferred MP-12’s shiny face over MP-27 Ironhide’s more grey/white face. Anyway, MP-14+ could never be entirely toon accurate as the mould does not have the same precise arrangement of doors and side windows as the toon model which ironically borrowed that design cue from the G1 toy. 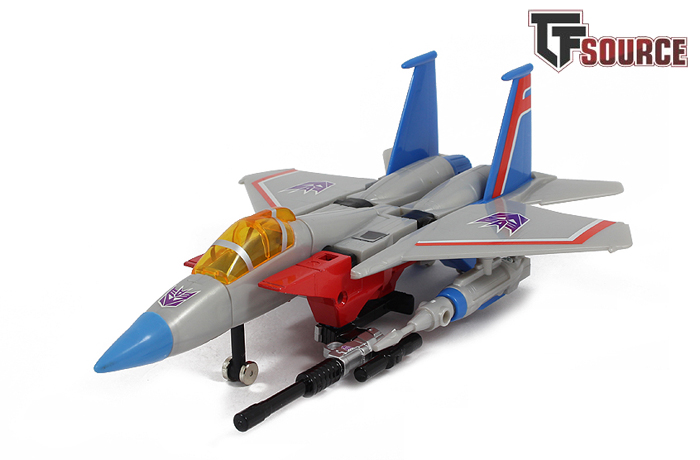 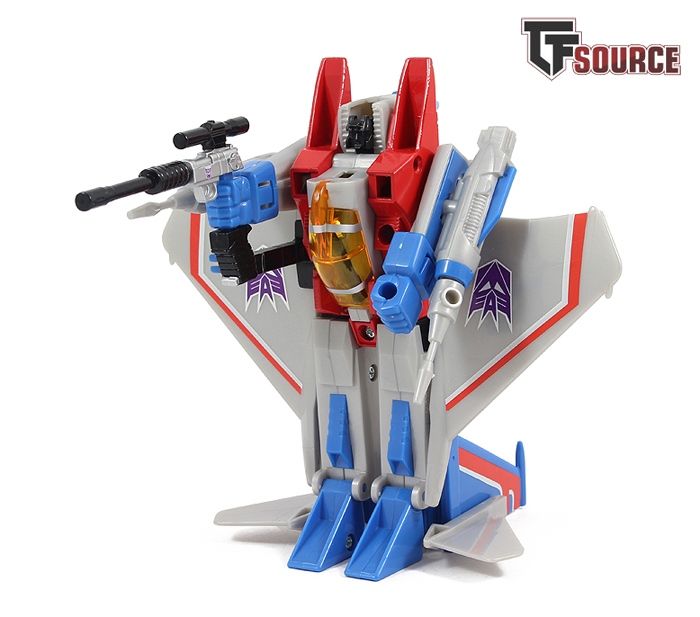 Let’s not kid ourselves, though, this isn’t Takara’s first journey down this road. The above reissue TF Collection #9 G1 Starscream was the second occasion the mould had been reissued within about 3 years. Instead of the classic G1 Starscream colours, he sported a brand new anime-inspired deco including screen-accurate light blue parts, orange canopy, a different grey and even added functionality in the way of fists capable of holding a G1 Megatron accessory in gun mode. These days, this Anime Starscream is quite highly regarded and I must say, in hand, it is utterly gorgeous. A worthy addition to the universe, but it did not signal a slew of further anime-accurate reissues. E-Hobby’s Anime Astrotrain, while expensive and in-demand today, flopped badly during pre-order stage before release. Encore versions of previously reissued Transformers may have had blue eyes and the odd cartoon nod, but they were not drastically different and, if anything, had more detail and finish than the originals. The argument against MP-14+ is that he’s gone the other way, and taken a beautifully detailed and real-life accurate Lamborghini Countach Mp-14 Alert and simplified it. 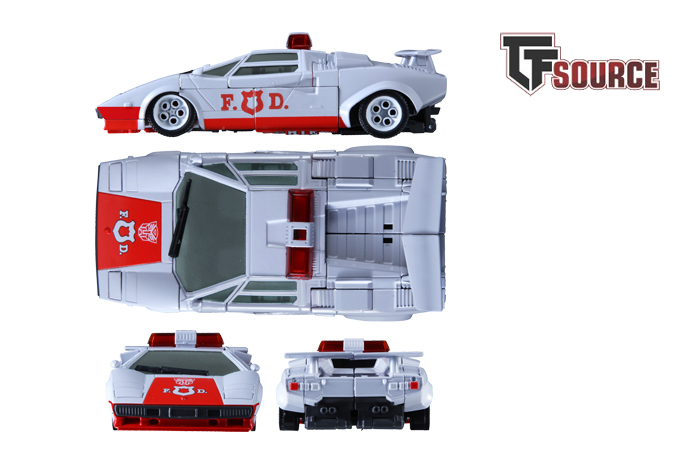 How about a positive implication? Imagine we do suddenly get a raft of Masterpiece reissues under the Anime Color Edition banner. We’d finally have a properly pink screen accurate Hot Rod (with fixed MP-28 chrome I bloody hope) and a Bluestreak that wouldn’t require the hybridisation of MP-18 Streak and MP-18S Silverstreak to be anime accurate. Definitive cartoon versions will really please some collectors, especially those who were unhappy with Wheeljack’s Alitalia Lancia-accurate deco instead of the simplified cartoon colours. I vastly prefer the real life accuracy of the cars like MP-20 Wheeljack, and disliked Smokescreen for not being real life accurate, but I know I’m not speaking for everyone with those feelings. And what about the possibility that completely-screen accurate Masterpiece releases, devoid of manufacturer markings and racing sponsors, could provide a gateway for TakaraTomy to finally offer Masterpiece Jazz (Meister) and Mirage (Ligier) in this line as “Anime Color Editions”? 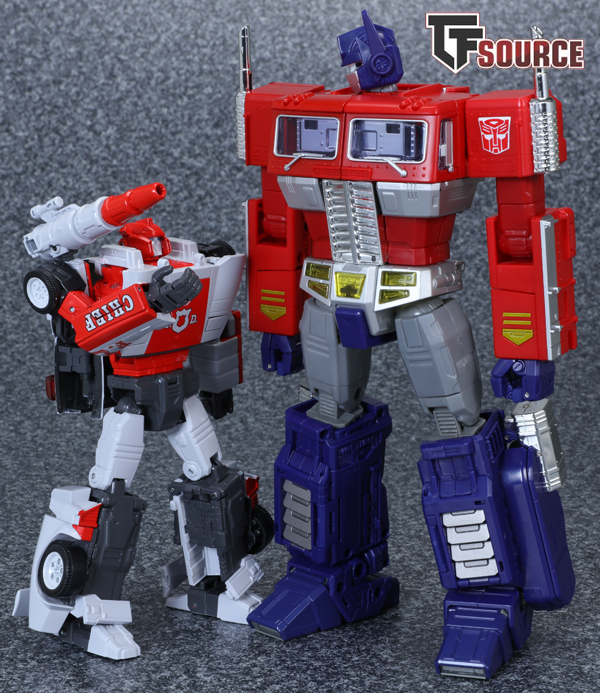 One can’t shake the feeling that instead of being a gift to collectors, there is an element of milking the mould with MP-14+, and furthering repaint possibilities for many Masterpiece sculpts at undefined points somewhere down the line. I’m really not sure I can justify a separate niche within my Masterpiece collection for repaints that are based entirely on how the character appeared in the show at the possible cost of real vehicle accuracy and better paint or presentation, or so little difference from the original release. I’m also not sure that should TakaraTomy only do a few select toys like this, I’d be able to deal with the random smattering of Anime Color Editions that may or may not replace current figures in my collection. It would be strange not to get a MP-12+ Sideswipe, because the vehicle mode disparity would probably annoy the pants off me. Even 3rd Party companies like Ocular Max, BadCube, KFC/XTB and MakeToys are going to great lengths to make their toys fit in aesthetically with the MP line, including the way they present their vehicle modes. Do they now have to change tack as well? They’ll probably buy into the Gundog philosophy of offering toy and toon versions separately, no longer concerned about a harmonious amalgamation or definitive version. 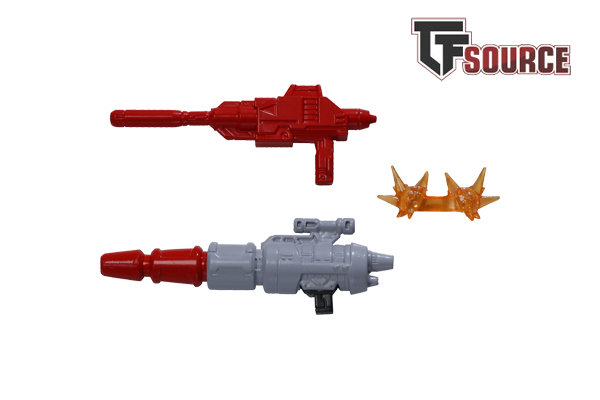 Maybe the most worrying implication of all is that should MP-14+ and its subsequent plus-mates be successful, it will mean that TakaraTomy will feel they can dress up an MP repaint however they like and it will sell, even if deep down we think it doesn’t look as good as the first version, definitive version, toy version or premium version. Because there are collectors who prefer MP-14+ over the first release. There are many names we can come up with to describe each side of the coin depending on our preference. Ultimately, if catering to all preferences is the route that TakaraTomy take with Anime Color Editions versus regular editions, meaning all of us can get what we want and choose our preferred release of a mould, that’s probably a good thing. Assuming there are enough sales to support the divergent Masterpiece concepts. Once more I am left pitying the completists, which on this occasion, includes myself. 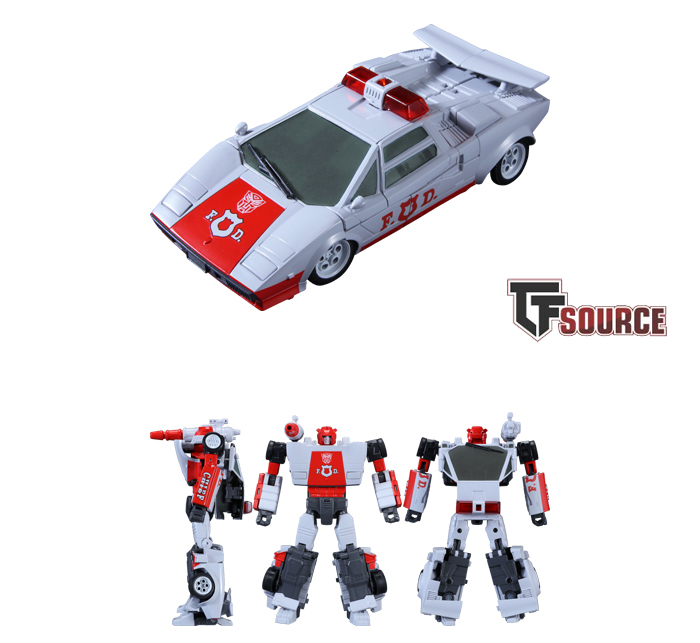