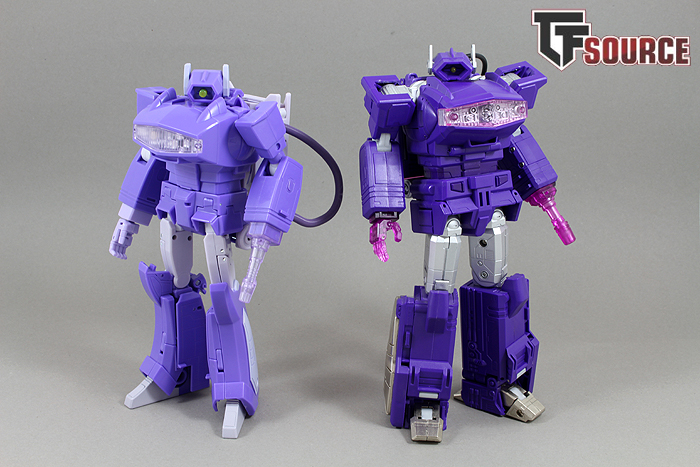 It’s very common now for Transformers discussion taking place on online forums or social media to be centred around Masterpiece or 3rd Party Masterpiece figures, with a ton of other excellent lines, initiatives, aesthetics or size classes receiving less attention or taking a back seat in people’s buying or interest. I myself wrote recently about how important it is to be even more focused than ever, and the article was primarily about the above two categories. This week, I let a few collectors remind us of the benefits and appeal of looking beyond Masterpiece and 3rd Party Masterpiece figures. Having covered Generation 1, Animated and Movie toys myself in the not-too-distant past, our contributors look at City bot-scale TFs, Unicron Trilogy era toys, Legends-class 3rd Party figures and current mainline series figures. 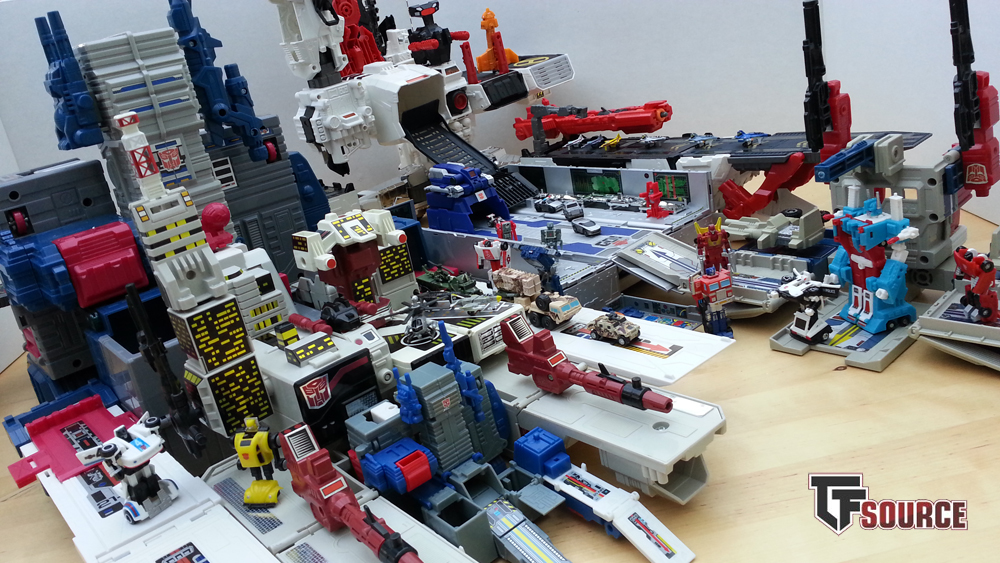 Kit Tang will be the first to enthuse about an area of collecting dear to him, city bots. Having myself learned of the wonders afforded my enjoyment of Transformers by picking up a G1 Overlord and MakeToys Utopia in the last year, I’m already sold. But what does Kit have to say?

“So the question is why do I collect City bots? I mean, there are a lot of negatives. They can be prohibitively expensive (the money for just one could probably fund 10 deluxes!). They take up a lot of room, which is a problem because I’m not lucky enough to have space for a permanent display for them and in ‘City mode’ they don’t look good with anything Legion scale and above… So why do I bother? Because when they’re all laid out, fully populated with WST’s and Micro Machines, Autobot city is right there. A living, breathing, fully functional metropolis that (in my head) could just get up and walk away. It takes my breath away every time I set it up and if anyone experiences the same awe and sense of childhood fulfilment that I do? Then there wouldn’t be a question anymore!” 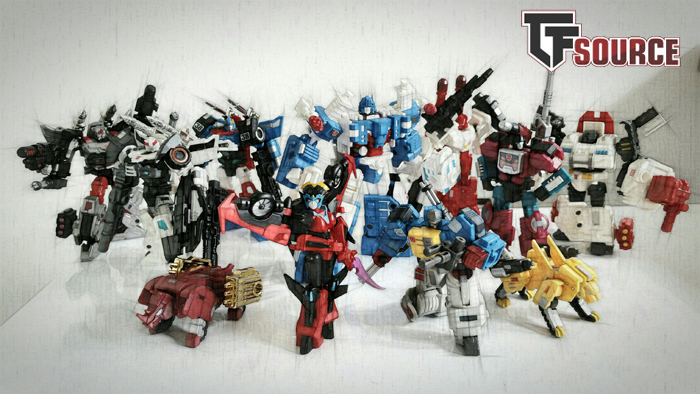 From the giant to the tiny, there’s a movement growing. Third Party companies DX9 and Iron Factory have been releasing legends class figures with high quality materials, superb posability and playability for a year and more now. I only recently got hold of Iron Factory Smokebomber and discovered what the fuss was about, blown away by the articulation in such a small figure. Here’s Jon Strong to explain specifically why he collects Iron Factory figures:

“I think what got me hooked on the Iron Factory gear was that I didn’t expect it. I didn’t expect such detailed and sharp sculpting at this size. I didn’t expect the crazy poses some of these guys are capable of throwing. And I certainly didn’t expect the Schwarzenegger levels of weaponry that come packed with so many of their releases. Being modular, you can build and build and build the more sets you buy, and it’s pretty easy to create ridiculously OTT gun platforms/arm up your toys from owning just a couple of releases. 5mm ports and pegs mean these weapons can also be utilised by a huge variety of official and unofficial figures too. 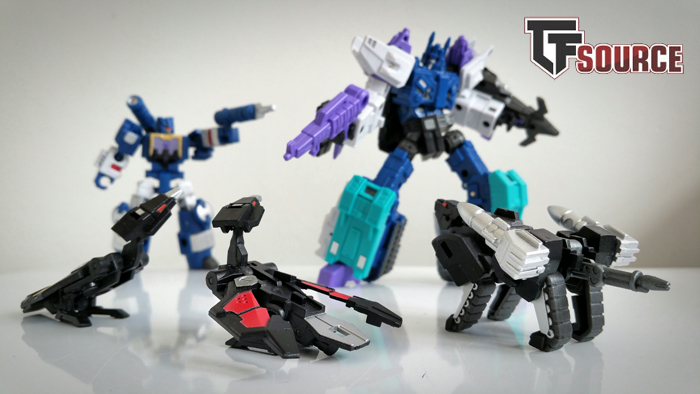 “Iron Factory releases have felt like a real breath of fresh air in the 3P arena, offering up something a bit different in both scale and scope. They don’t get involved with armchair toymakers, they tease their product and get on with releasing it. As an IDW fan I enjoy how they are utilising designs from as far back as Spotlights Ultra Magnus and Blaster to more recent titles such as Last Stand Of The Wreckers and the current ongoings. Their work is not reliant on the comics though, the Scouts and Sniper set saw wholly original takes on Soundwave’s minions with Laserbeak and Buzzsaw transforming into blast shields and Ravage an anti aircraft tank. All three are capable of interacting with Soundwave as weaponry or defensive measures all at the same time and it’s this deviation from the norm and focus on a fun play pattern that I find damn refreshing. Gorgeous looks and genuine hand candy from designers more than happy to do their thing away from the glare of the fandom? That’ll do for me”. 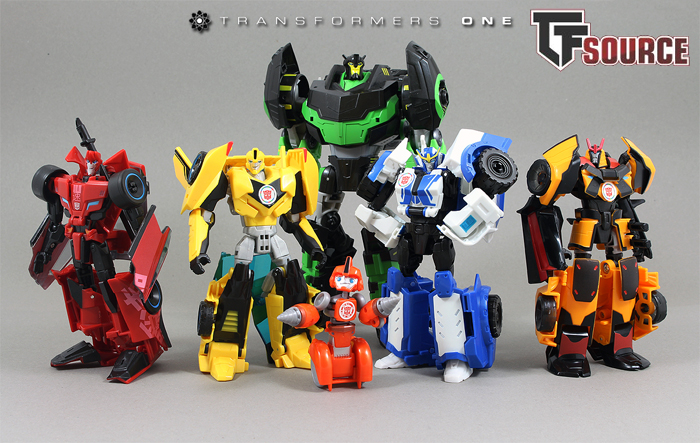 Robots in Disguise (and Transformers Adventure, the TakaraTomy version) toys have also found their way into my collection in the past year, from the amazingly good Legion class mini-figures to larger voyager class TAV toys, with Warrior class (deluxe) and Minicons thrown in for good measure. I also love watching the show. With a notable chunk of collectors dismissing these lines as cheap, solely for children and unappealing, here’s Anthony Brucale of TFU.info to explain its appeal with words that are very close to my own feelings.

“To me, the appeal to collecting the current RID toy line is twofold. In a large context, speaking strictly about the toys, it is always fun to see how a figure will take shape, so to speak. I tend to collect Warrior Class figures and enjoy discovering how the toys are engineered from one form to another. The key aspect for Warrior Class toys is to remain simple and fun, yet effectively representing the character. In a smaller context, I find the TV series very entertaining; the writers have had a knack for creating enjoyable characters, similar in a way to the original series. Much like G1, the show as a marketing tool is very effective. I often find myself wanting to see a character on my shelf after seeing it on the show. Perhaps it’s a compulsion many of us collectors share, and ultimately it is the driving force behind my collection of portions of the current RID line”. 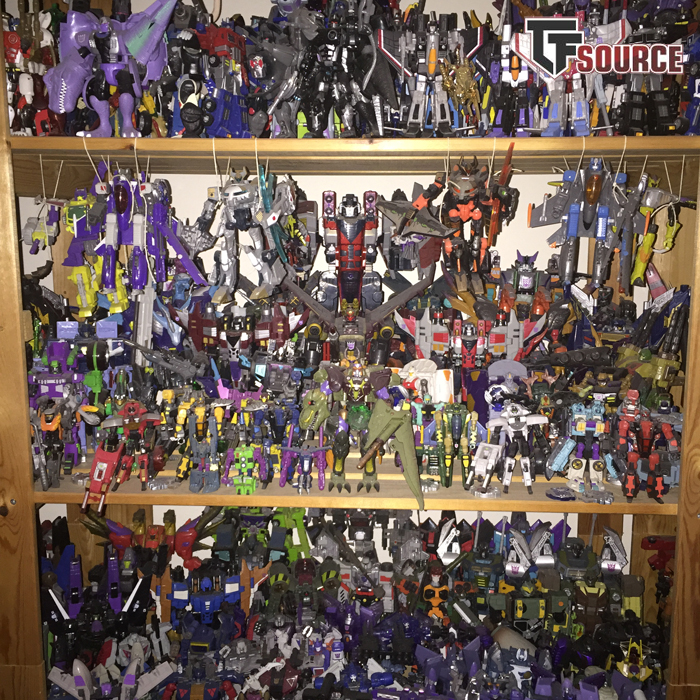 Now one era of figures I have virtually no experience of – shows or figures – is the Unicron trilogy of Armada, Energon and Cybertron. I have been impressed by some of what my friends have shown me from their own collections, and here is Dan Ghile to explain his love affair with the toys:

“I’d like to start by saying that it’s not an area I actively collect, but having picked up a few in the past year it’s striking how they compare to toys of today. Firstly they’re of a very different period of Transformers, one before Classics/Generations, where the idea of getting G1 accurate toys was a firm pipe dream. MP-1 was a one off. Binaltech and Alternators were G1 nods but more updates than straight recreations. Energon was the 20th anniversary toy line and conceptual nods to Rodimus, Galvatron and Wheeljack were mind blowing. Compared to the complaints towards the 30th anniversary toyline it does make us seem very spoiled. And then there’s the gem of the period, Galaxy Force/Cybertron. A line I skipped back in the day and one that I’m finding hugely impressive now. It’s almost the last time that a TF line could stand on it’s own concepts before being sucked into a downward spiral of G1 reference (I say this as a primarily MP collector, but I’m very aware that the dependence on nostalgia is edging the franchise towards MOTU/GI Joe territory year by year). Cybertron/Galaxy Force toys strike you though as toys first, and bloody well built ones at that. Hugely impressive build quality, robust gimmicks, covered in paint. I dare anyone to pick up Galaxy Convoy and not be blown away by him. Soundwave has enough G1 to tickle the nostalgia bone but also seems incredibly fresh to this day. Megatron I recently took to a pub meet and all of those who hadn’t seen one before were stunned with just how much toy there was.

“So why invest in checking out some of the highlights of this period? They’re damn fun toys. I may have MP G1 and Animated on my shelves but these guys are in my hands. Toys for the sake of being great toys”. 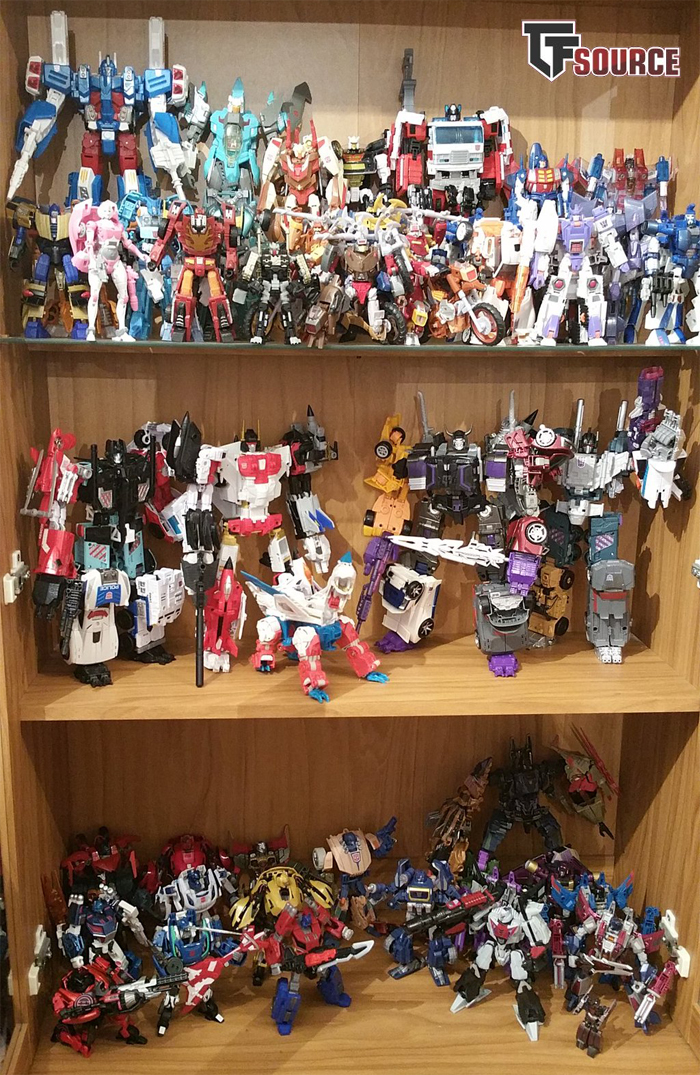 Finally, we have the Classics/Generations/Universe style of toy that is almost unsuitable for such an article because it remains so popular with collectors. Maybe it’s because I have seen so many ‘CHUG’ collections being sold in the last couple of years or how Masterpiece news can occasionally drown out other TF news that I felt the need to ask Tuxedo Mike to share with us his reasons for not abandoning them and keeping the faith in light of the upcoming Titans Return.

“For me, the Classics line was exactly what I needed to keep my interest in TFs going when it hit in 2006 or so. After firmly enjoying Beast Wars and then the excellent Car Robots/RiD lines, the ‘Unicron Trilogy’ toylines hadn’t caught me in the same way. Energon had some standout figures (Galvatron one of the most notable), and Cybertron had a number I eagerly bought up a little after the line ended, but I didn’t get very invested in the fiction and characters, so didn’t feel like the toys represented things I was especially concerned about. The Masterpiece toys were beautiful, but between the expense and the slow release rate, I wasn’t going to have a lot of them anytime soon, and the Binaltech/Alternators line was sadly winding down, having got me excited by offering new toys that explicitly represented updated versions of characters I loved, rather than being similar guys in new fiction named/designed/decorated as homages. 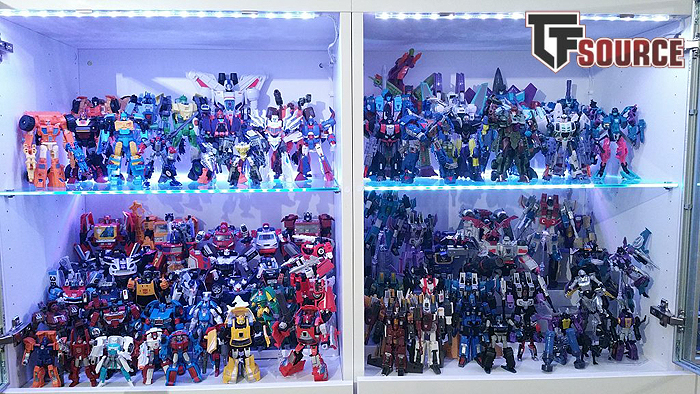 “Classics scratched the same itch that BT/Alts had for me, updated toys of the characters I had enjoyed, with the same improved modern articulation but smaller and cheaper to buy, so I started collecting them without a second thought, and the line grew to encompass more and more characters I wanted represented anew in plastic. Some of my favourites being limited to Botcon and other exclusives was quite galling at first (I’m looking at you, Botcon Dreadwind!), but enough time and patience means I am almost entirely caught up on Classics/Henkei/Universe/Generations et al at this point. The modern Masterpiece line is full of beautiful toys that are more faithful to the G1 cartoon and/or toy designs, but they are still released in close to the single digits per year, and cost decidedly more than a £15-20 retail deluxe. Meanwhile, Combiner Wars and the upcoming Titan Returns line have respectively resurrected two of the major beloved G1 gimmicks en masse, after a decade of one-offs like Universe Cyclonus with his Targetmaster, Fall of Cybertron Bruticus, or the more recent IDW-style Brainstorm. The Transformers fiction is so vast that there are still G1 characters awaiting representation, but who would have thought that by 2016 we would have official non-exclusive toys of Straxus, Impactor, and SCROUNGE? Titans Return is bright on the horizon, and I can’t wait to see what’s next”.

See? It’s not all about official and unofficial Masterpiece figures! 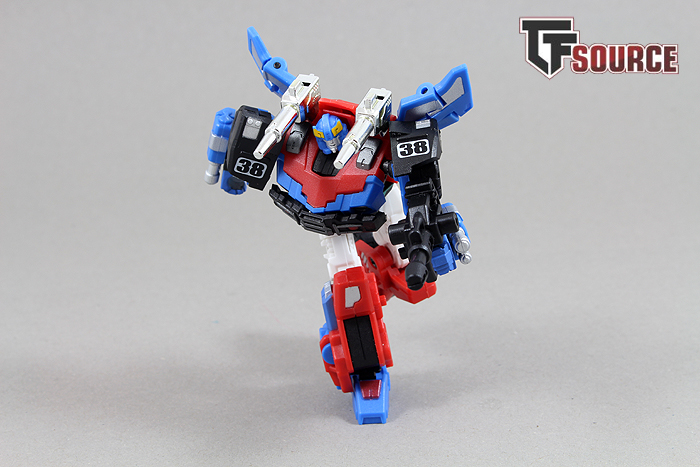