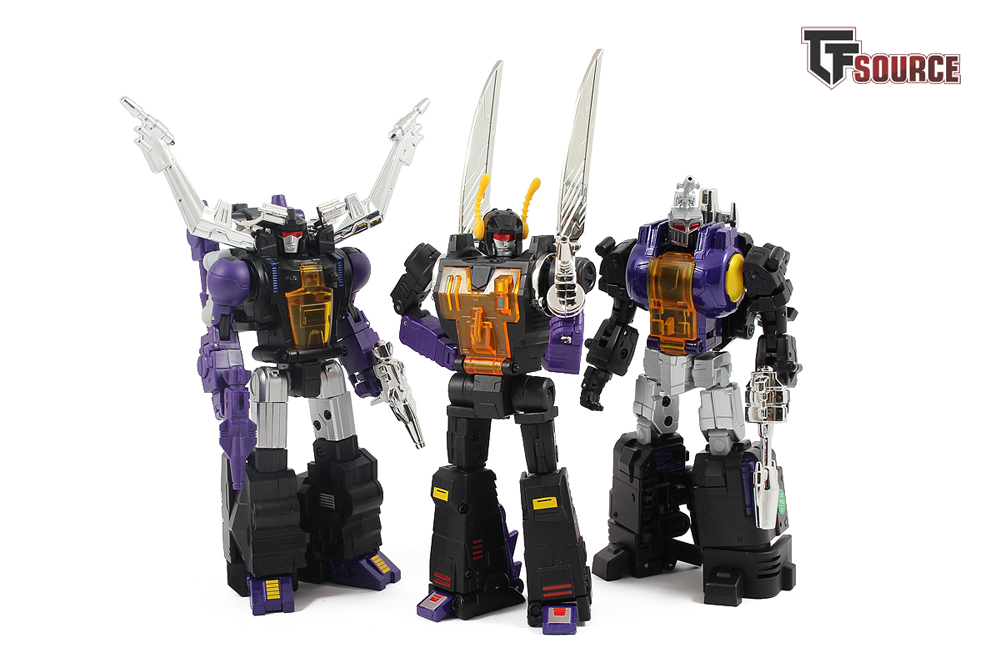 Forager makes three! The Masterpiece-styled evil insect robot team is finished and man alive, they look complete together. This pre-release review sample, FT-14 Forager test shot to be precise, rounds out the team of three bugs within 8 months of Grenadier first introducing us to FansToys’ take on this popular set. By the time it sees release in June, it will still have been less than a year since FT-12 hit the market. Grenadier was a real hit with me, but Mercenary took longer to love thanks to a total pain of a transformation, so where does Forager sit? 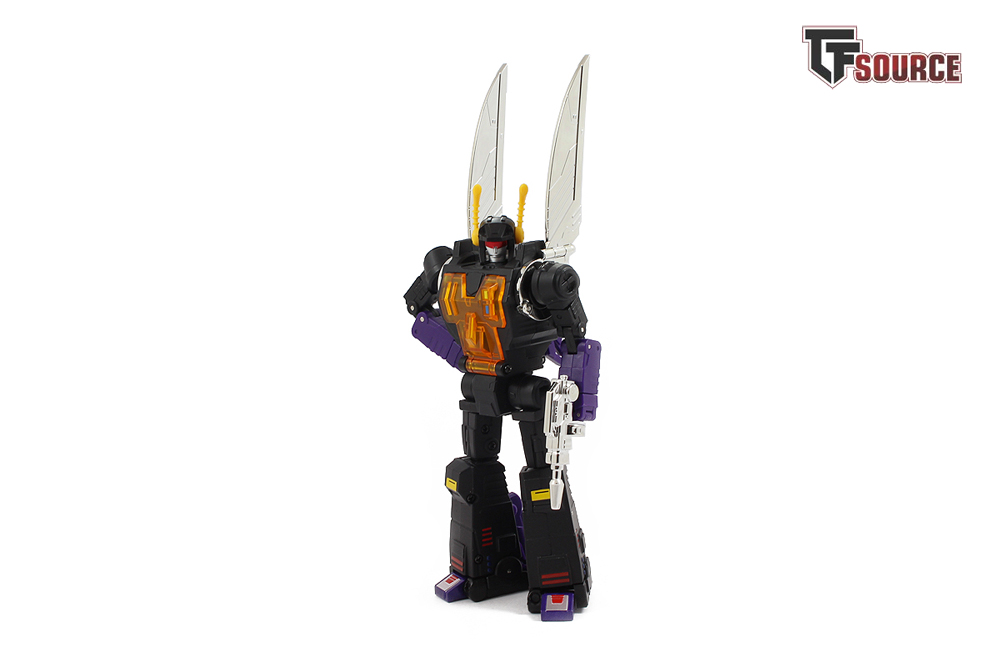 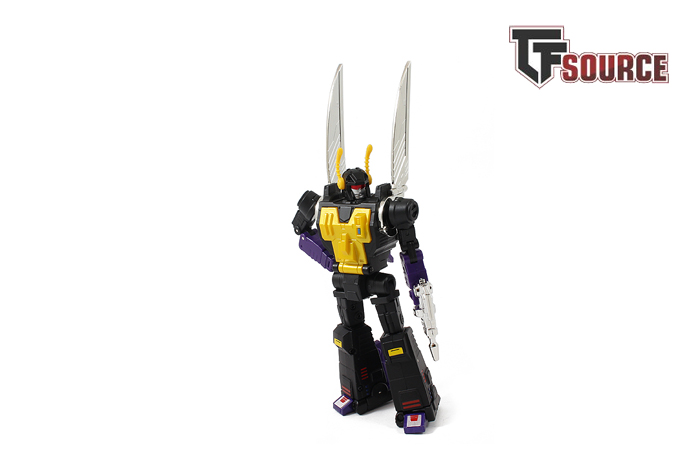 Like all the FansToys bugs before him, Forager comes with a solid yellow chest piece that references his cartoon animation model, and also a translucent orange version that harks back to his Generation 1 toy roots. I respect the decision of those whose collection demands a cartoon-accurate look for all figures – normally mine follows the same path – but for these insects I have insisted upon three qualities that the original toys had: die cast metal, translucent orange parts and chrome. I’ve been happy to let features like that slide in favour of show accuracy or artistic re-interpretation for so many toys, but for some reason, the highly uniform creepy-crawlies have had to exhibit those same properties for me to get excited. Grenadier, Mercenary and now Forager have not let me down in that regard. 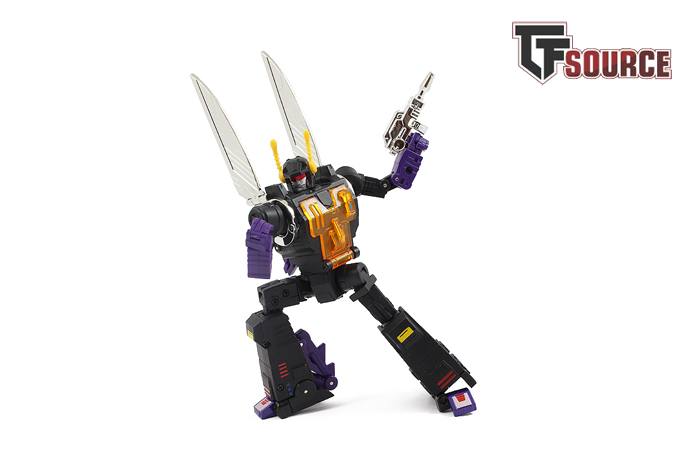 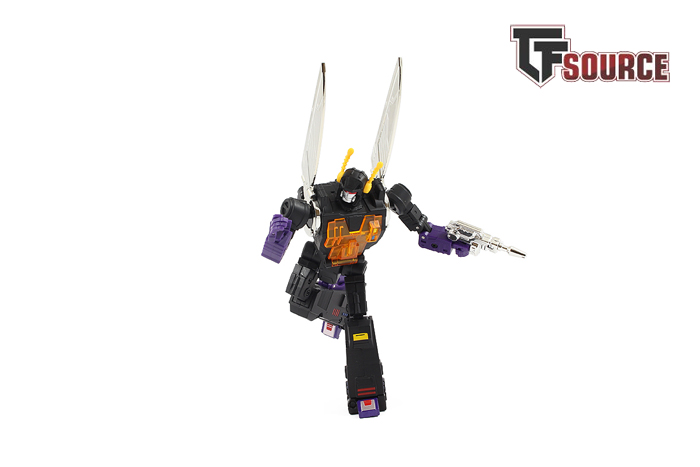 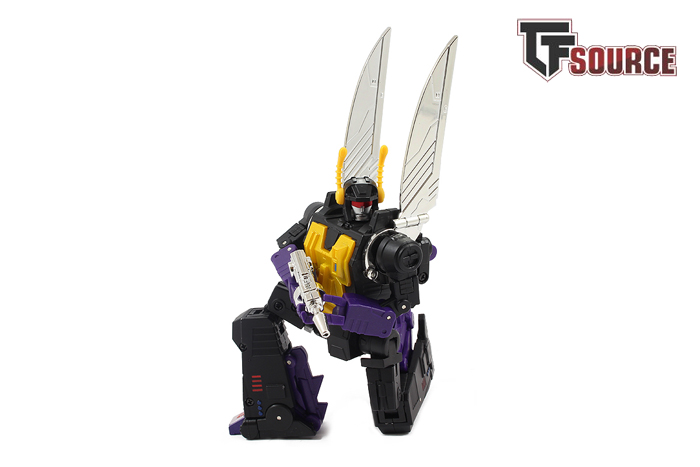 Like the two other FT bugs, on first handling Forager seems unusually heavy for his stature. That weight is well-distributed too because he’s a very dynamic and stable robot. There is articulation aplenty in the limbs and the best poses come naturally to him, aided by double-jointed elbows, extensive knee bends and ankle tilts. It’s a joy to handle Forager as parts are not flapping about or falling out of position when you are manipulating the figure. The only exception is the head, as lifting that will cause it to start the transformation process, therefore there is no up/down articulation for his head. Proportions are excellent and from virtually all angles, he looks amazing and accurate. Seeing as how badly Grenadier and Mercenary suffered from parts hanging off the back, unable to be suitably hidden, the solution employed to hide Forager’s insect legs on his bag is greatly appreciated. 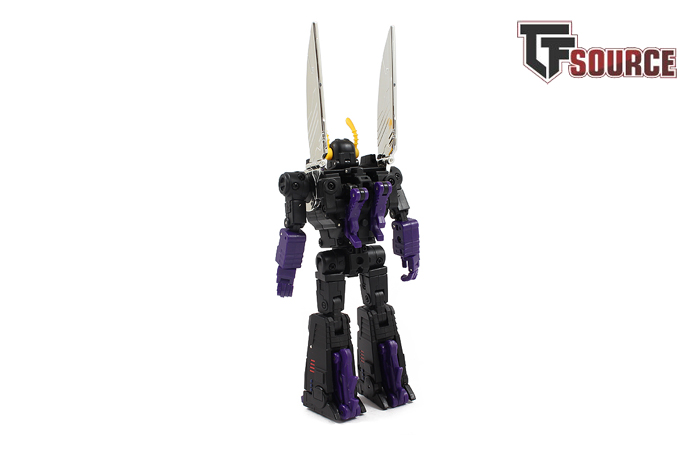 So there’s no question that FansToys nailed the robot mode for Forager, the original bug it’s based on was my favourite of the bunch both in terms of looks and as a toy, and that hasn’t changed based on FT’s interpretation of them. Forager comes with a chromed hand gun, the replacement chest, extra head part (now die cast) for Grenadier and I expect three more little Energon cubes when he’s finalised for release. Changing the chest over is as easy as it was with the other two FT bugs, just undo the screw around which the chest is hinged and swap. There are no articulated insect legs included with the test shot, so maybe FT felt the original style of the grasshopper legs on Forager was sufficiently realistic. Gun grip is not excellent, but closing the hand around the weapon does keep it secure enough. 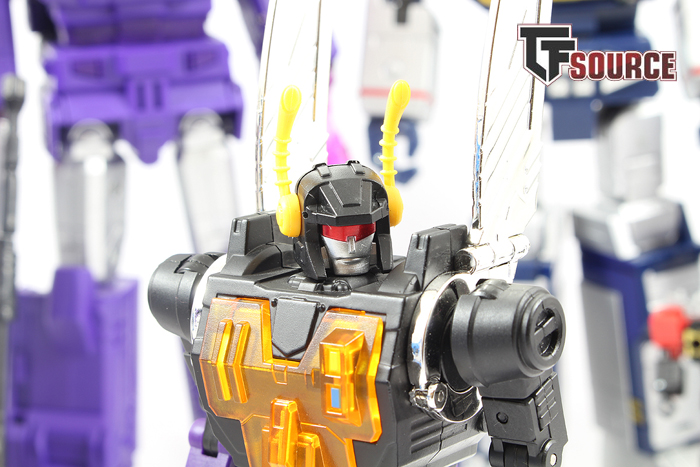 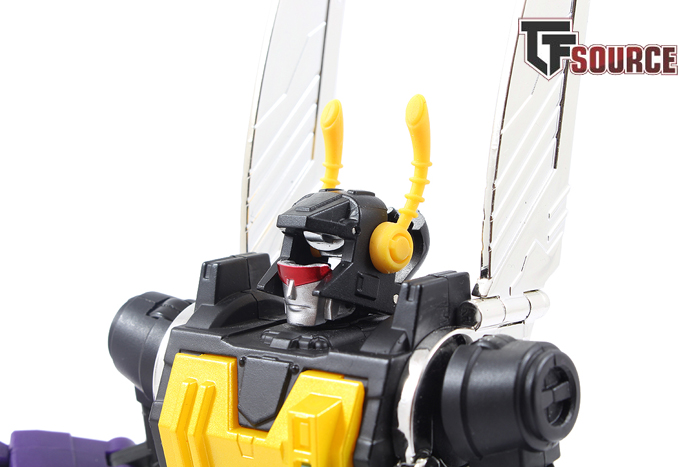 The head sculpt is pretty good, and I’m especially relieved as this has not been a strong point for some FT figures but they seemed to have turned a corner looking at Mercenary, Willis, Forager, Stomp etc. Those antennae are not as delicate as on the original 80s figure as they are now rubbery and spring back into position, but can be rotated. The second picture above shows how the helmet can be lifted allowing the robot face to be folded back flat. What you must then do is open the back of the helmet and fold down the plain silver face. It’s not really supposed to be a robot mode battle mask, it’s just meant to hide the robot features when Forager is in bug mode as his head is still very visible even if turned around. You can see the moulded spot on the chest intended for the faction sticker we’re all going to apply. 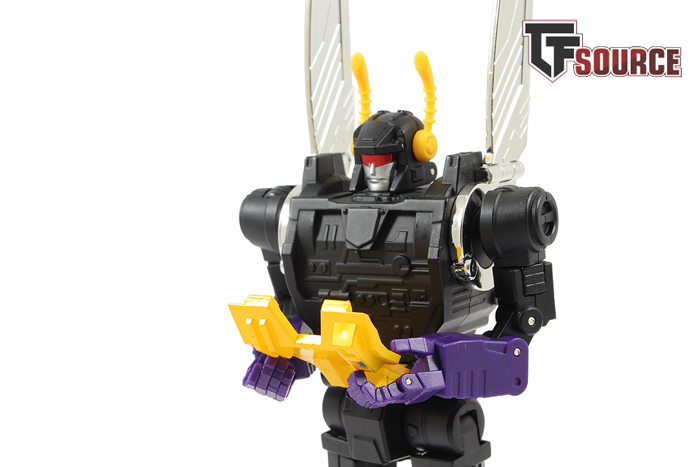 Two significant gripes, now, I’m afraid. Firstly, I have an issue with the lack of functionality in some of these Masterpiece-styled figures because often aesthetic accuracy is chosen well above play value. This was highly evident when I reviewed FansToys’ Willis. Now, while this is not entirely the case with Forager, I don’t know why they even bothered adding an opening chest flap when there is not even a cavity behind it, just moulded detail. It’s like opening a door onto a brick wall. The original toys had Diaclone pilots that would sit in the canopy, accessed via the translucent flaps (hence the reason for the translucency). The reissues of those toys allowed one to store Energon cubes in the cavity. With the FT Forager, it serves no purpose beyond being a nod to an ancient feature. 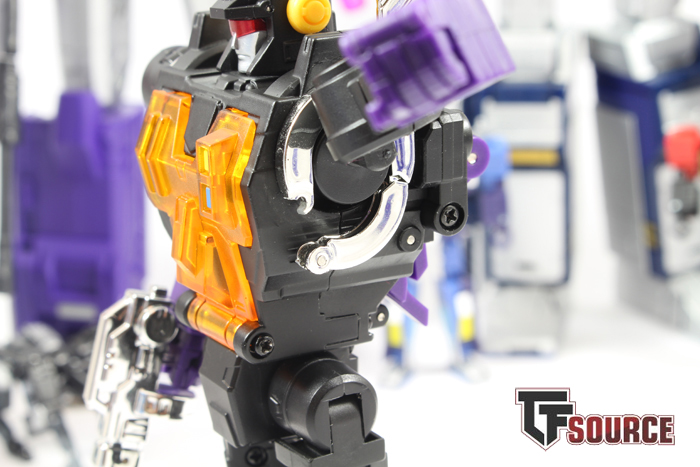 Gripe number two is more serious. Out of 5 reviewers known to have been sent samples of FT-14 Forager, three of them – including me – have had a breakage with the chrome ring/clasp mechanism at the base of the insect wings. This is in theory a very elegant solution to the Forager transformation. You rotate the wings and undo the claps to allow the insect/robot limbs to be extracted, switched, and then pushed back in. It reduces hanging parts in robot mode and allows for both modes to be faithfully recreated. The problem is, the clasp and its hinge are weak. I think in my case, what actually happened was that the parts were fused at the hinge and when I opened the clasp it snapped at the hinge. The reason I say this is that once it had snapped off, I had to use a lot of force and perseverance to get the remaining piece of the ring (narrowly avoided using the term ‘ringpiece’ there, phew) out. FT are aware of this issue and seem to have already known that it was a potentially easy thing to damage, I hope some solution is cooked up by the time June rolls around. If it isn’t, at least we’re all aware of the dangers and can exercise due care. 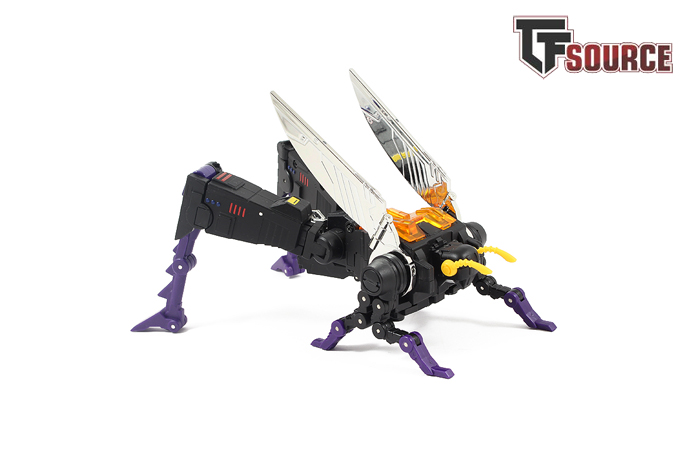 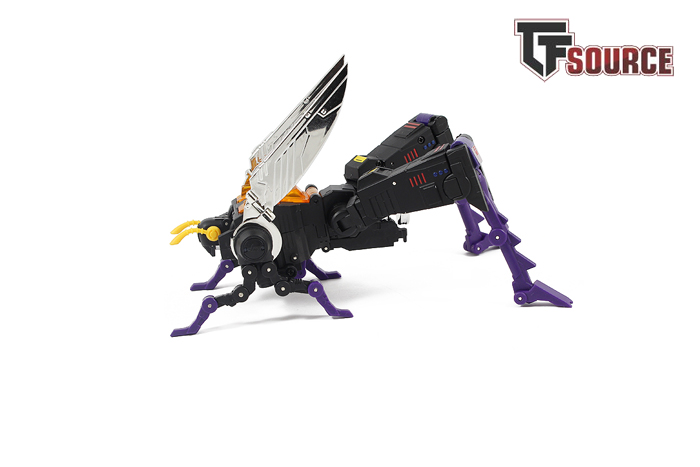 The transformation isn’t quite as delicious as Grenadier, but it’s a damn sight nicer than Mercenary. I’d even call it good, which is not always the case for FT figures. There are not many of them I would consider picking up and transforming for casual play and interaction. Forager is one that I actually would, so well done there. Like I said, once they sort the issue with the ring clasps and hinge, that whole switching of insect limbs for robot limbs and storing the extras in the back cavity is pretty neat, and legs are easy to do. Simplicity was always the key to the evil insect robos and it’s been rediscovered to some degree with Forager. The thin plastic strips that the robot arms/front legs slide out on from the back cavity are going to be very simple to damage if careless, but there’s such a specific purpose to their extraction and exposure that I think collectors will manage to look after them as the risk only presents itself during transformation. They aren’t going to break if you drop Forager in either mode. Drop him during the transformation, though, different story. 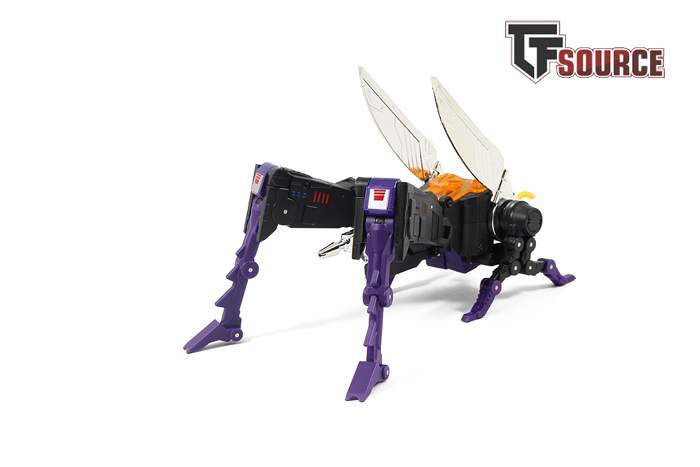 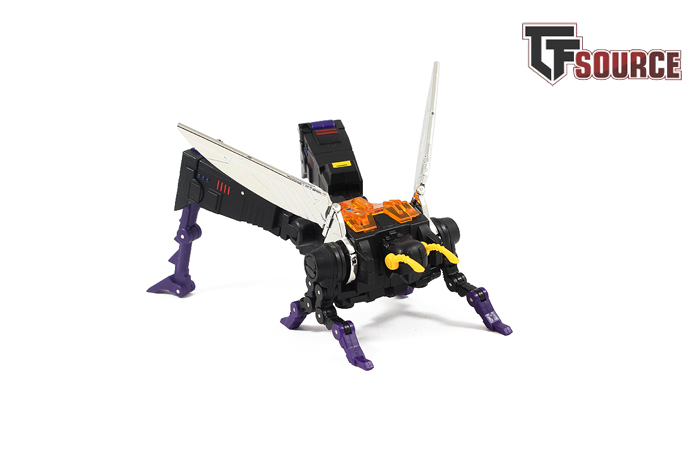 Forager is gorgeous in bug mode, so both configurations are a hit. Those articulated grasshopper wings are lovely and the bug legs are really easy to pose and manage, providing ample stability. The gun can be mounted in what could be considered a slightly naughty spot if you are immature like me, but it can be explained by way of grasshoppers having quite a long thorax that stretches beyond the hind legs, or an ovipositor if Forager was female. I absolutely adore Forager’s grasshopper mode. The subtle paint apps of silver, yellow and red in specific spots add much needed highlights among wide expanses of black.  Of slight concern (or relief?) is the fact that all of the joints on the front legs of the insect are now pinned, so should there be any looseness as with Grenadier and Mercenary, they cannot be tightened. One could argue that the inherent looseness of the former two insects’ legs came from the fact that the screws were needed to change between G1 and articulated bug legs. 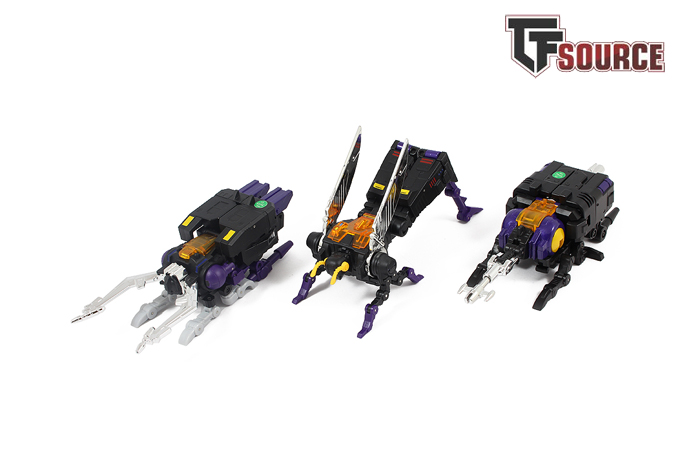 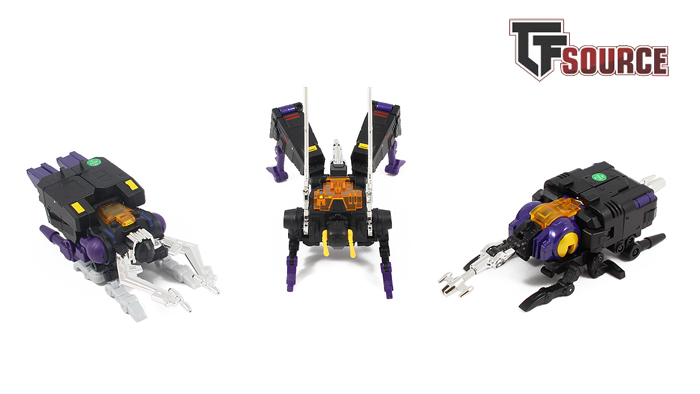 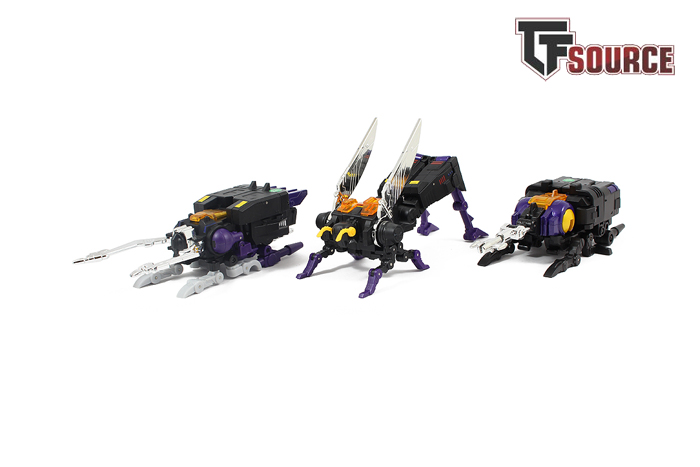 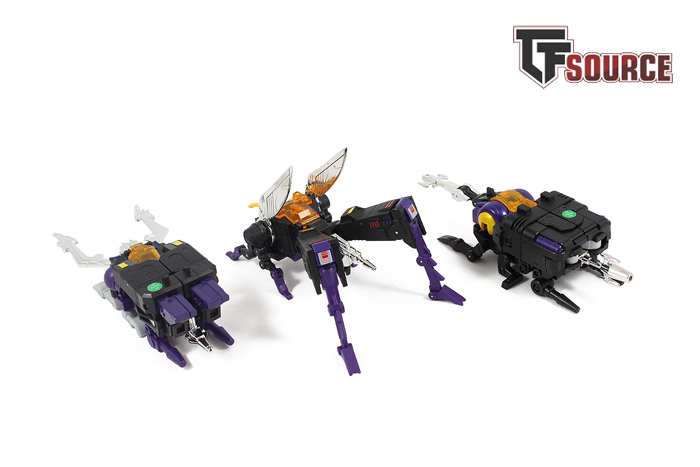 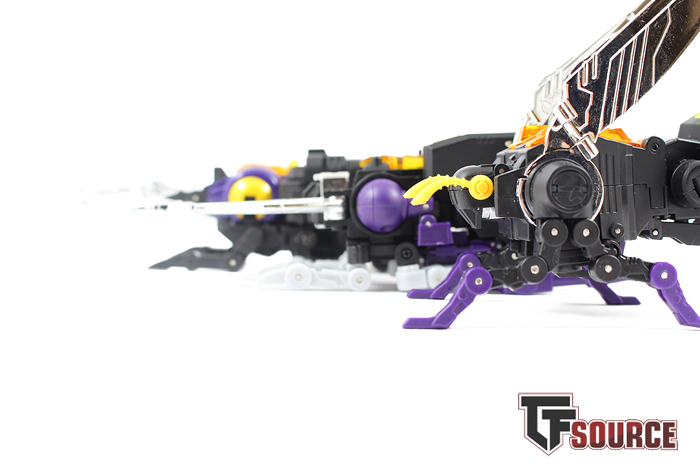 FansToys’ Grenadier, Mercenary and Forager make a fantastic-looking set. Putting the three of these toys together in bug mode was as ‘Masterpiece’ a moment as I have experienced with my collecting, official or otherwise. I especially opted for the purple Grenadier (again going with toy over toon for once) because I knew just how delicious the uniformity would be in the flesh when all were together. They rise above their own individual flaws when set up together as a display. I know that I have left the green QC approval stickers on Mercenary and Grenadier, but it serves as a comedic and ironic reminder of the fact that within minutes of owning each, one had a tiny broken tab and the other scratched paint. True, Forager has also presented me with more bother in that department, but he’s good enough for me to actually not allow that to bother me. And that’s very odd for me. 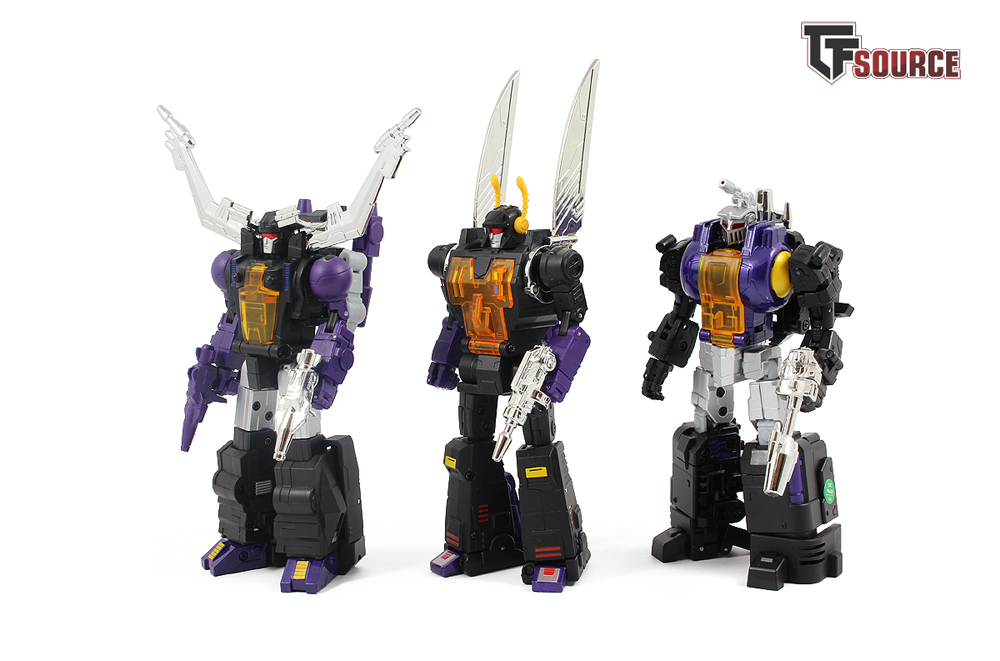 The three of them in robot mode are arguably even more impressive than in insect mode! The orange chests, the chrome flashes and significant purple or silver dabs, simply beautiful. A killer set that deliver accuracy – toy and toon – and in the case of Forager and Grenadier, considerable play value. While the plastic of the chest pieces, their colour specifically, matches, the surface behind them sometimes causes them to appear different. Maybe that bothers you, much like the differing chrome tint on the Iron Dibots, but don’t let that detract from the spectacle. 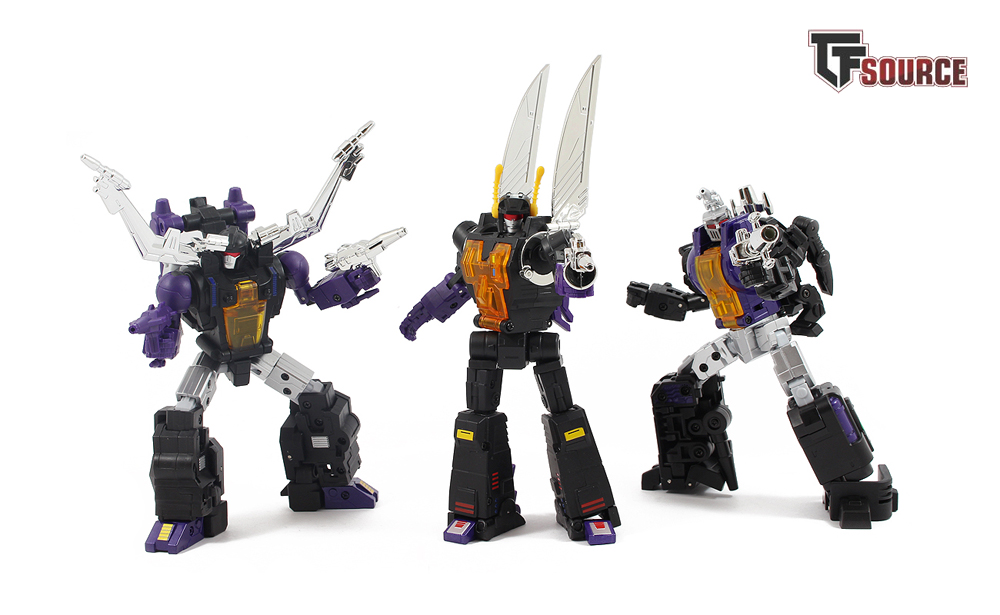 I needed Forager to be very good, because Mercenary’s flaws were highly irritating and because this last insect was always my favourite of the bunch. FansToys have delivered two excellent-looking modes, a good transformation and play value, not to mention very faithful reproductions of a significantly distinct team of memorable characters. If the clasp/ring issue is ironed out in final production then the figure can go down as a roaring success. If nothing else, just placing the three of them together and then with the Masterpiece Decepticons (not to mention the other gaps that FansToys have been filling in this line up) will potentially justify your investment in them – depending on whether you collect for completeness, aesthetic, nostalgia or simple display. Even if you collect for play value, a minute lack of functionality aside, Forager scores well. Give me a more articulated robot head and space in the chest for storing a cube or two, and I’d go so far as to label this the perfect representation of the character and its original inspiration. As it is, I’m more than happy enough with him and a little sad that there’s no more of them to look forward to. Diaclone Insecter Robo repaints, anyone? 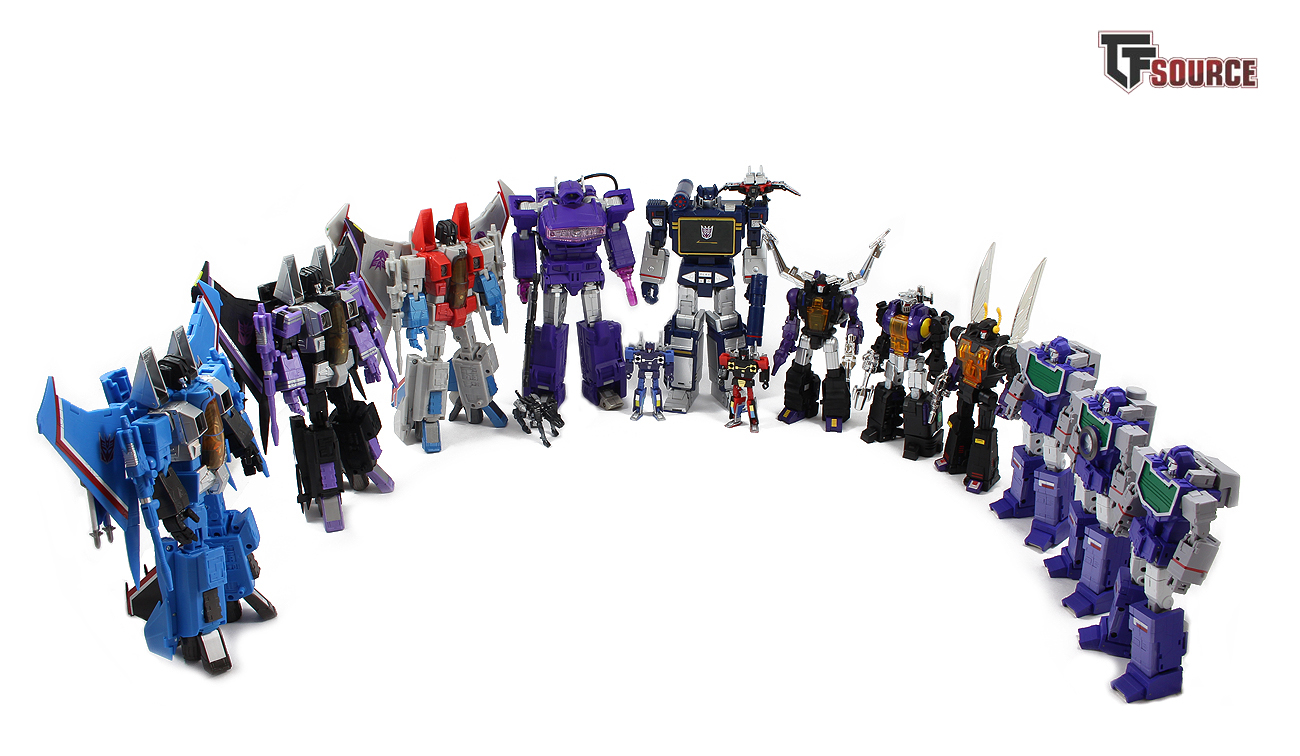