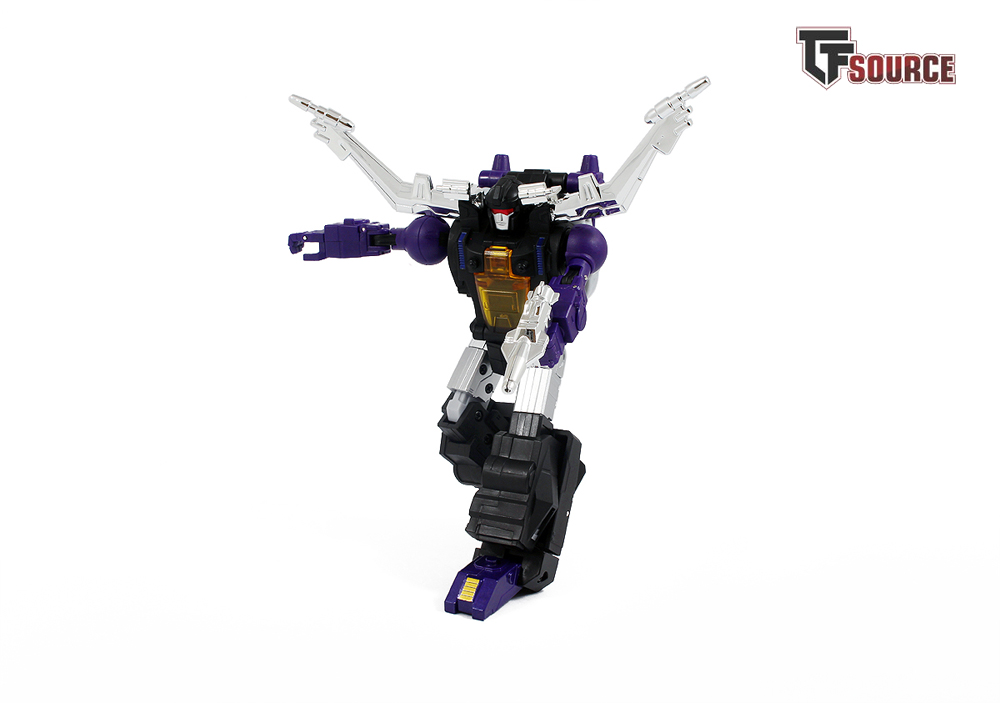 FT-13 Mercenary is FansToys’ second evil insect after FT-12 Grenadier, and has a lot to live up to thanks to the success of the latter. Based on what was originally called a lamellicorn type beetle insect robot, Mercenary recreates the look of the original toy and on-screen inspiration. With die cast, chrome and clear plastic chest flaps a staple of FansToys’ Masterpiece-style bugs, a collector could either leave the figures stock and enjoy the cartoon accurate look or go full G1 toy-centric. Grenadier’s success was based on good quality, a lovely finish, fun transformation, multiple display options and a very good looking accurate evil insect/robot which was faithful to the source material – albeit with two releases to cater for which source material a person saw as greater priority. Mercenary has similar toy and cartoon appearances, so only one release was necessary. 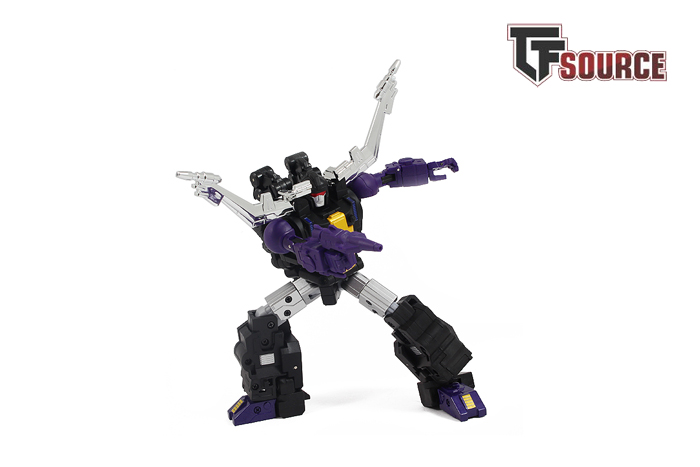 Mercenary, like Grenadier, comes with articulated bug legs as well as G1 style appendages which in the case of this release, look much more like the white/grey on-screen appearance of the front legs instead of the yellow toy front legs. He also comes with a chrome handgun (toy accuracy) and a purple one too (toon). Considering how much screwing and unscrewing is necessary for replacing the bug legs, FansToys have included a screwdriver as well. Like Grenadier, Mercenary comes with three smaller Energon cubes – smaller even than those that come with FT-11 Spotter – as well as an instruction book and collector’s card. Styrofoam insert comes as standard with FansToys releases since FT-05 Soar. 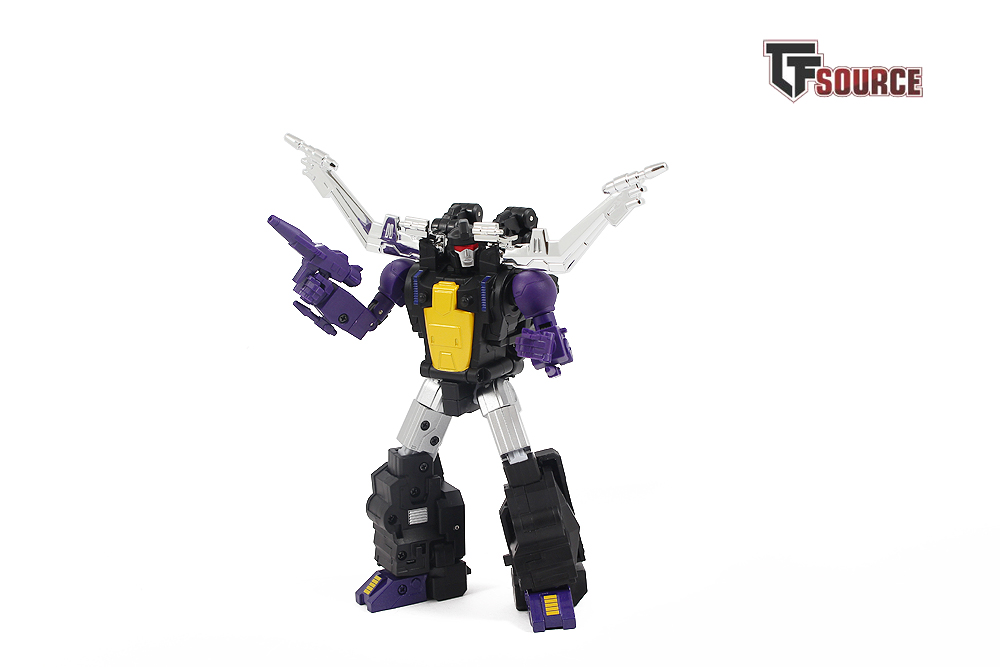 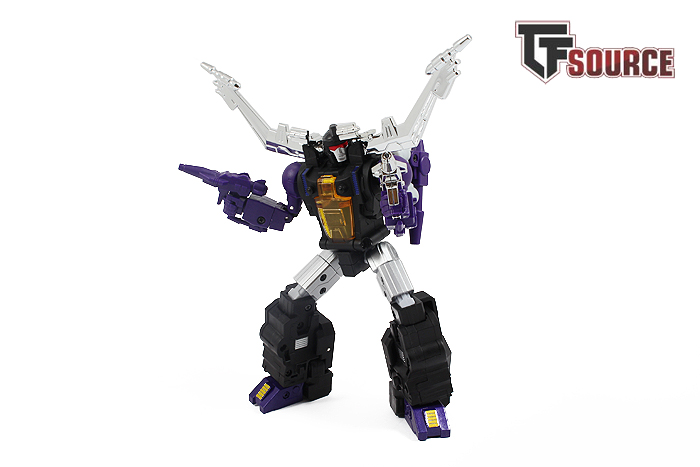 The weight of die cast is immediately overwhelming, such a heavy little figure. The chrome on his antennae is so visually immediate and integral to his recognisable silhouette, no quarter has been spared here to make them stand out as much as you’d hope. Colours are perfectly reminiscent of the team – unmistakable mixing purple, black, orange, yellow, silver and chrome. 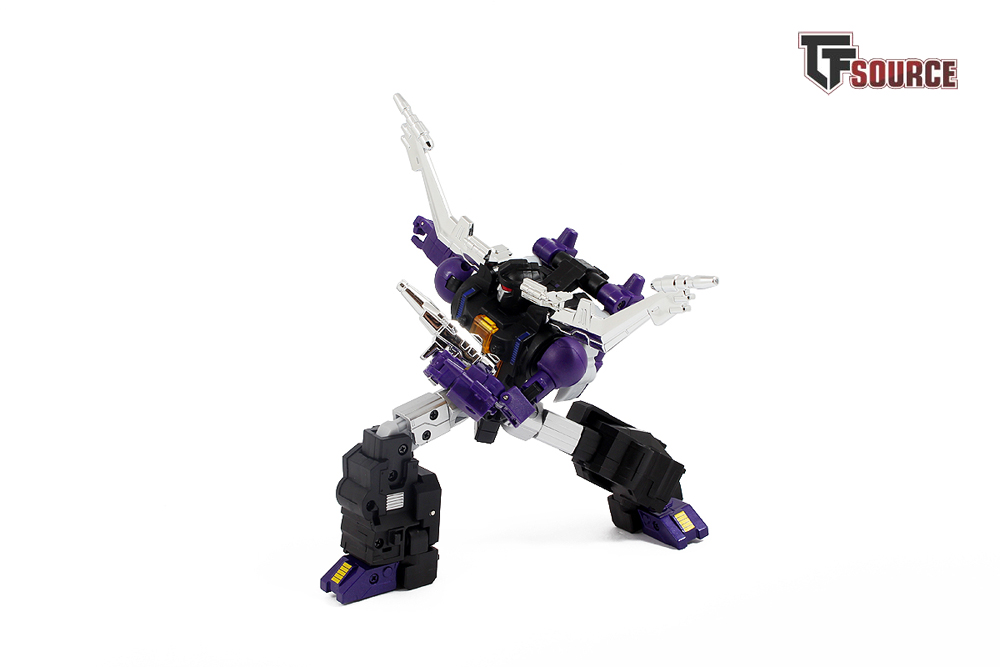 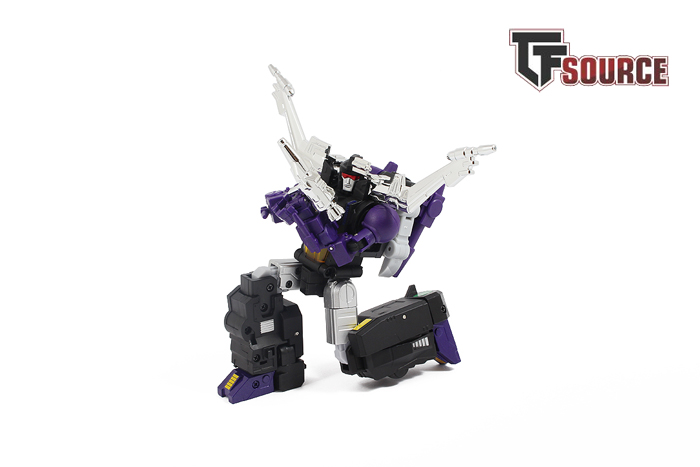 Apart from the major obstruction to the robot face of the chrome parts that cover it in bug mode, and this does annoy me because I really have to rotate the antennae out further than I’d like aesthetically, it’s a damn good robot mode. Lovely proportions and a highly striking appearance, completely in line with the original inspiration and beautifully complimentary of Grenadier, Mercenary could just be taken out of the box and placed on the Masterpiece shelf without question. I’ve gone for G1-style legs which I have found a way of folding away reasonably neatly, but it’s still a really silly amount of back kibble, it’s a proper rocket backpack basically. It’s actually a worthwhile consideration to remove them completely if you don’t feel like transforming your toys – a real consideration here as we will touch on later. 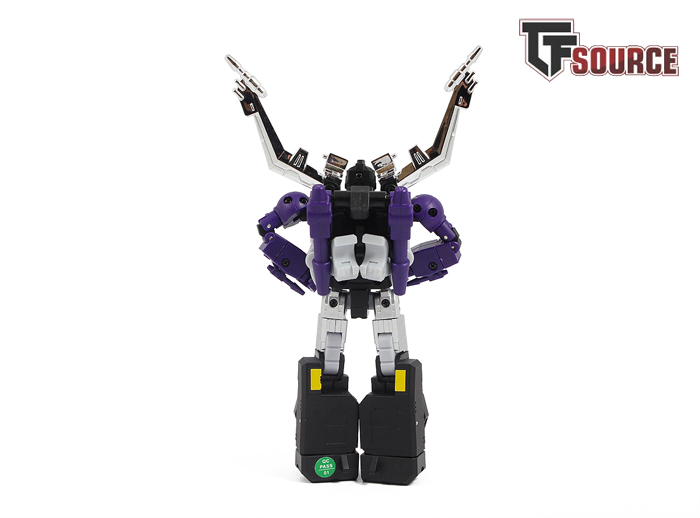 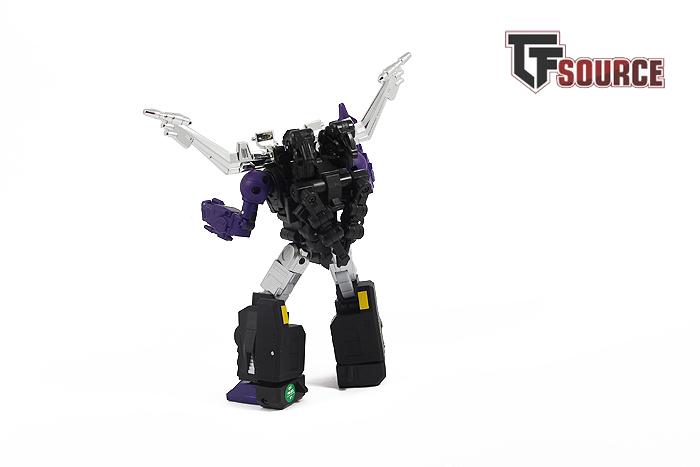 I was sad that I could not get the weighty Mercenary to do ‘The Run’, and that his robot head doesn’t look too far upwards at all, but with his range of arm movement and waist articulation he can still be made to look extremely dynamic and quite convincingly thrilling. There’s a very good ankle tilt too, albeit in one direction only. I found the gun grip to be a bit weak, not Masterpiece Sideswipe weak, but it’s not secure unless you wrap the fingers around tightly. Even then it can become dislodged easily with a knock or arm movement. 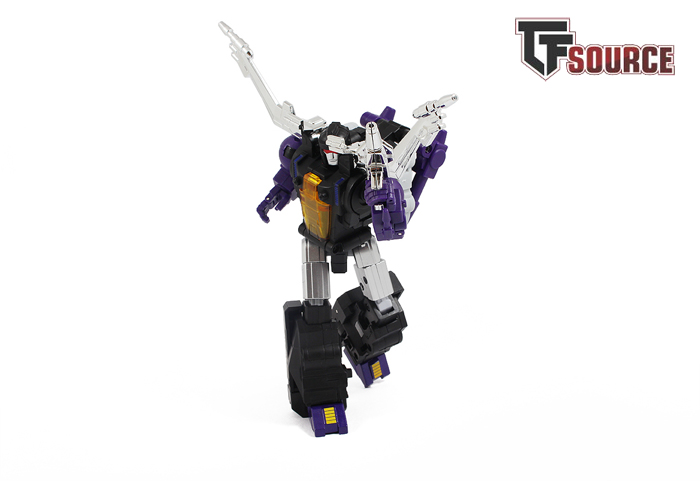 During the test shot phase, reviewers noticed that the waist section fell apart regularly and needed to be disassembled often. Thankfully, the production Mercenary has no issues with the waist. Mercenary was also accused of having a dodgy face sculpt (something levelled at FT products regularly) but in hand it’s pretty brilliant and very faithful. It’s one of my favourite aspects of the toy, as is the clear orange chest panel. One cannot store any Energon cubes (or Diaclone drivers) in that space on Mercenary, though, there’s too much crammed into the body for that. 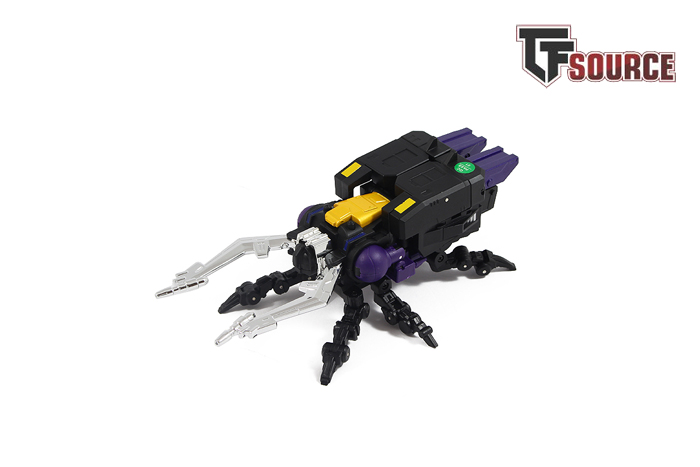 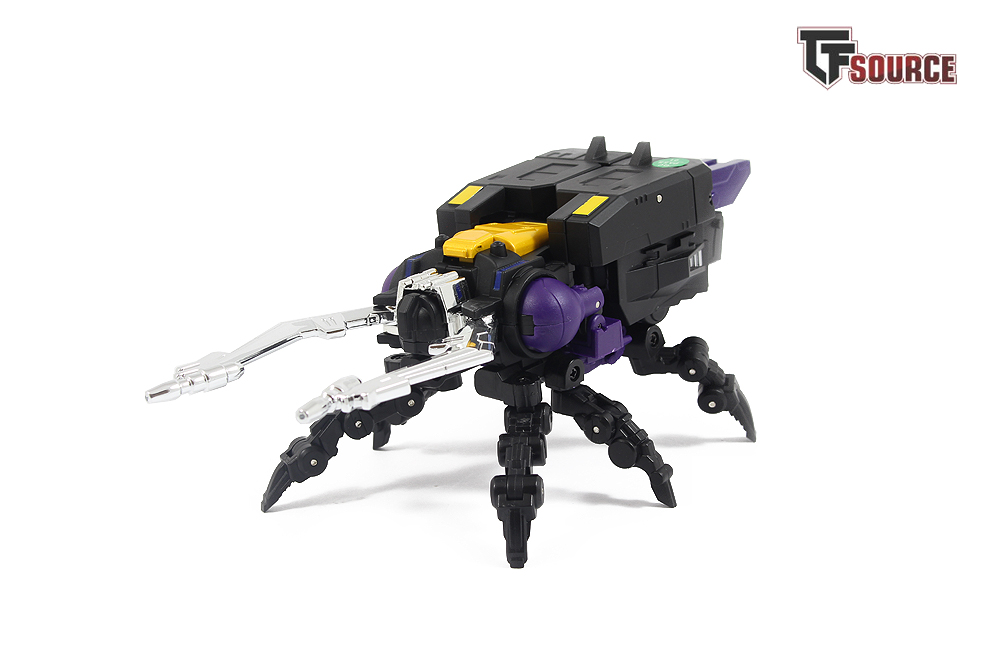 Right, the transformation. Mercenary is not the kind of figure where you will fall in love with the conversion on your first attempt. As it comes packaged in robot mode, your first port of call is trying to create the lamellicorn beetle. Had it been the other way around, my first impressions would have been vastly different. I found absolutely nothing intuitive about the conversion, but that doesn’t mean I can’t appreciate it. After a few tries, the transformation of the forearms and wrists becomes easy and although they do not tab securely onto the back, it’s still neat. The compression and pulling down of the shoulders is interesting and I really had to study the instructions carefully to believe what I was being asked to look at and do. “How the hell am I supposed to move those blocks in his chest?!” I asked the FansToys literature, until I spotted the small arrows indicating that one must push the shoulders in. 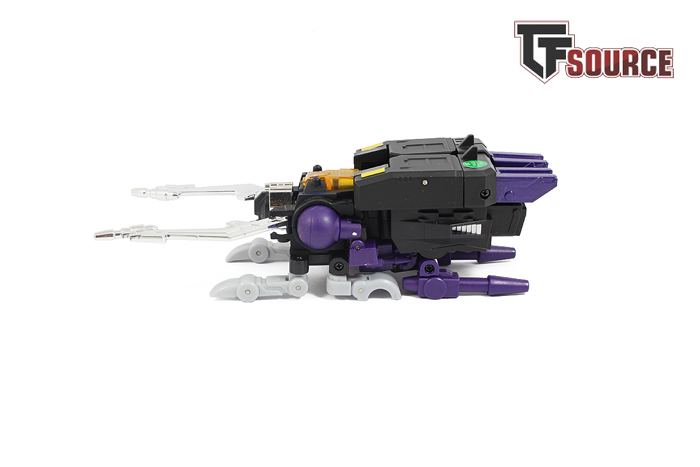 I am very grateful that the black hooks on either side of the waist are so forgiving, because I was sure I was going to damage or break them with my initial missteps when trying to get them extended and rotated out of the way. Again, you learn to work with them pretty quickly. I quite like the conscious sequencing of moves required with recent FansToys transformations such as Spotter and Mercenary. It can aid a fluid and systematic, almost poetic transformation. Once you’ve done the robot forearms, hidden the robot head, sorted the shoulders, swung up the hooks and gotten the insect legs where you want them ready for final compacting, the robot legs go and nuke the fun of the transformation from a tremendously great height and shatter the poetry. I absolutely hated the collapsing of the robot legs in Mercenary’s transformation. That is, until I figured out what I was doing wrong. 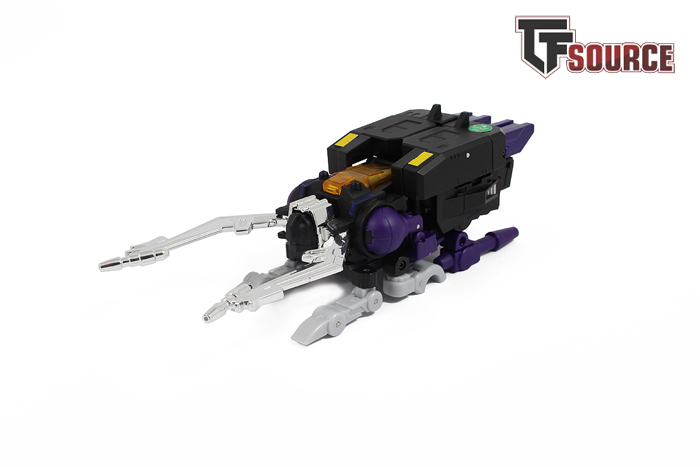 I mean, it’s clear what you need to do, the instructions are not unintelligible. Technically, I was certain I was doing everything right but when it came down to it, the stiffness and tolerance felt all wrong. FansToys hadn’t proven themselves to be too good at extending legs yet, I was put in mind of the dangerous bloodthirsty Quakewave legs and the super stiff extension on Stomp’s legs also. The first time the Mercenary legs compressed really took me by surprise and the black hook that should secure it in place scratched a line of yellow paint off the raised section on the bug back (you can see it in the pictures). It had gotten to the point where I could transform Mercenary all the way up to the leg compression and love it, then if it wasn’t complying I would give up and leave it half transformed or turn it back into a robot. But as I say, I figured it out. I was angling up the leg cover and actually pushing the cover up and over on the hinge it’s meant to pivot about, THEN trying to compress the legs which was causing untold amount of grief and creating a mass of resistance. I tried something else though, I angled up the leg covers, held them there angled as far as they would go, then compressed the legs and sure enough they slid right up with more ease, and THEN I pushed the leg covers up and over on the hinge to lock into place with the black hooks tabbing on. Completely different experience, completely altered my appreciation of the transformation. I can’t tell you how much that has increased my estimation of this figure. Of course if you have insanely tight leg covers that won’t angle up or rotate over on the hinge/pivot, that’s a different story. 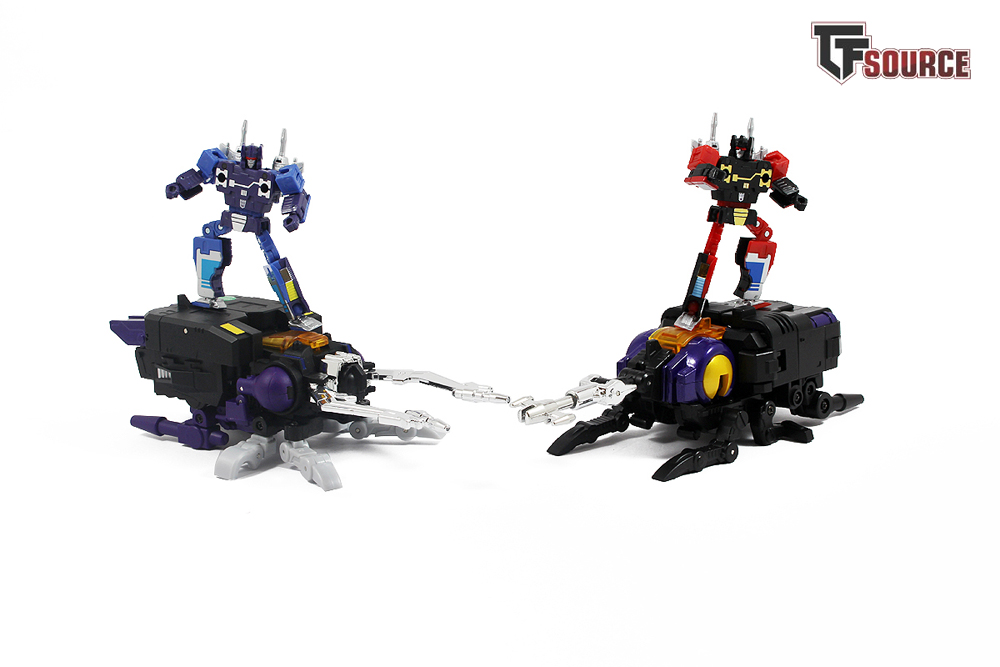 When the legs finally do obey and you get him into bug mode, Mercenary once again shines. What a fantastic, blocky, completely inorganic and mechanical bug with straight lines, chunks and shiny chrome. It’s pretty damn perfect in this mode, whether you want articulated creepy bug legs or oddly coloured off-white screen-accurate G1 legs. If you can even call them legs. Make sure the shoulders are really and truly pushed in as far as they will go because otherwise the orange flap won’t click shut in bug mode. Even then, the chest flap on mine has a tendency to pop out occasionally. Like Grenadier, you can attach the handgun facing backwards between the transformed robot legs in bug mode. I like this, it adds a touch more chrome to the bug mode. 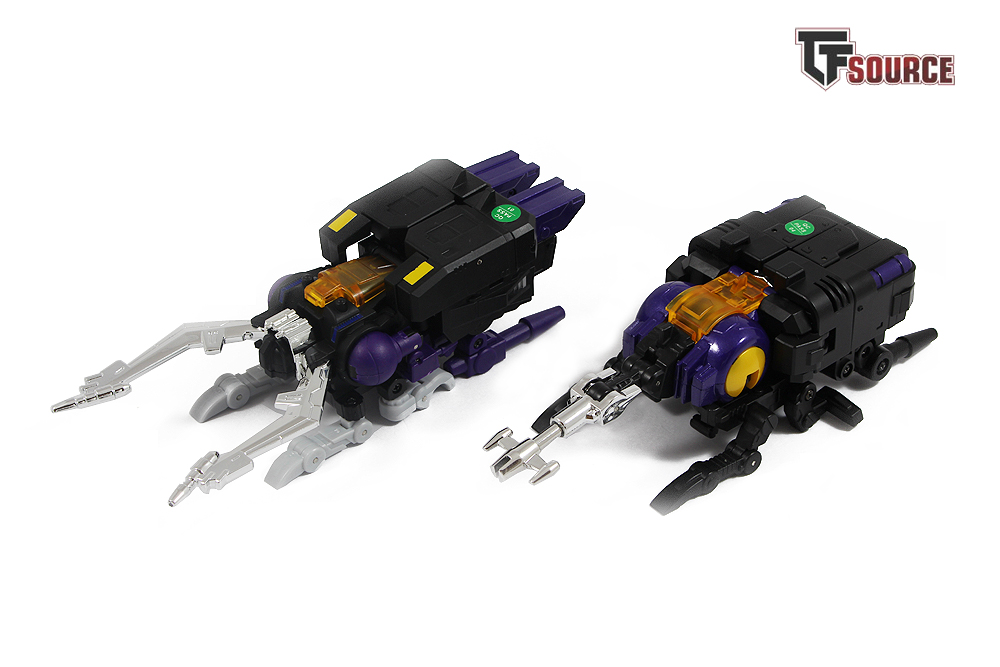 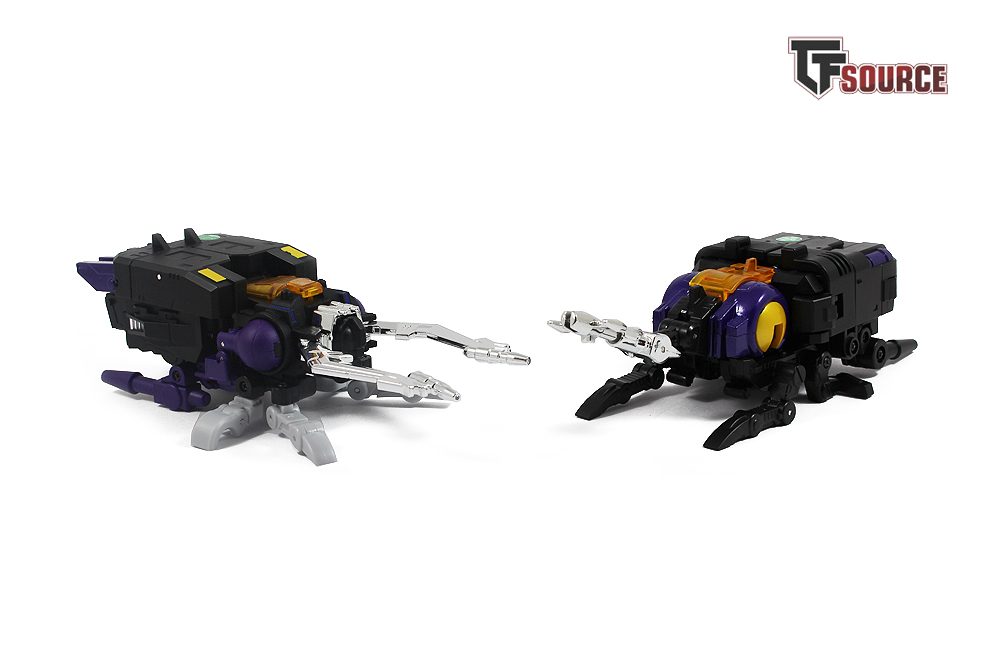 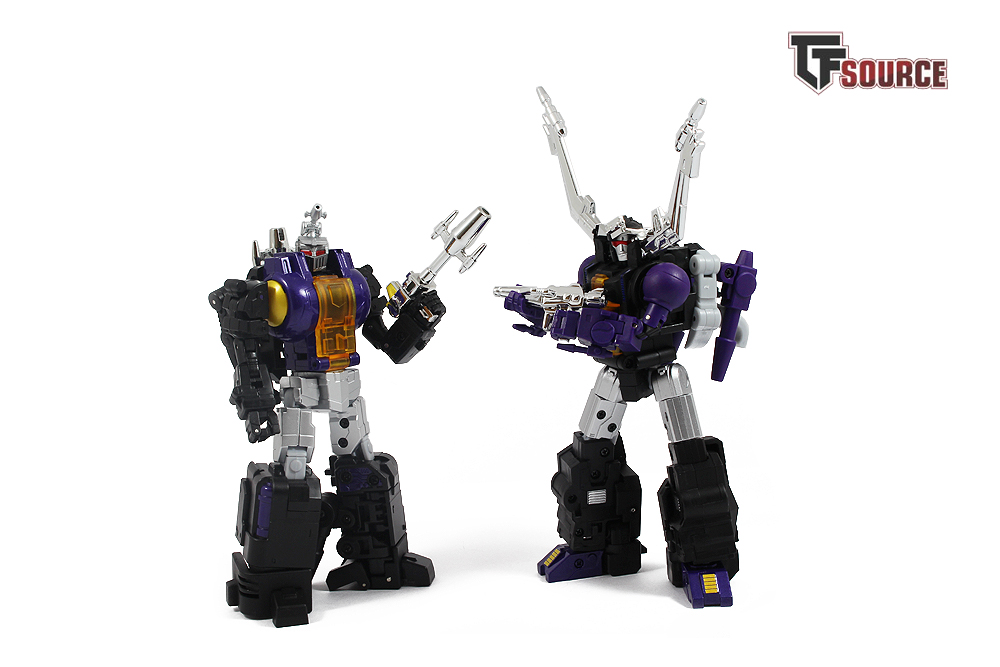 With the transformation sorted, all G1 toy-style parts attached (translucent chest flap, G1 style inorganic legs, chrome accessories) and placed next to Grenadier, Mercenary forces the planets into alignment and it all makes sense. Can you imagine how glorious this is going to be when FT Forager is next to these two and the team is complete? Die cast metal, translucent plastic and chrome is all I ever wanted for this team, it’s why I was always happy enough to own the original vintage set and not upgrade through Combiner Wars or previous 3rd party offerings, they didn’t quite evoke the same feelings for me as I needed from a set of evil transforming insects. FT have given Grenadier and Mercenary the ingredients necessary. 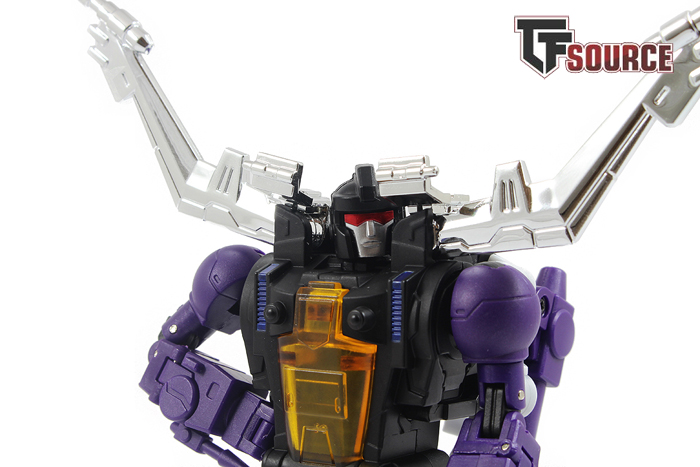 Even with the leg transformation figured out, there are things to remember. The bug legs are not all that tight and rotating them can rotate the screws, this could lead to long term looseness issues. I have to pull quite hard on the shoulders to get them to extend out when going back to robot mode, potentially another issue long term. The robot arms don’t peg into the back securely, my chrome antennae are not perfectly aligned, the robot head articulation is limited and often obstructed by the chrome covers, chest flap sometimes pops out…so it’s got its issues, no question. However, that leg transformation obstruction was the dealbreaker and sorting that out has really helped put Mercenary firmly back on the FT success list. It always had the looks, my goodness it had the looks, it had excellent posability, but now I can add functionality to that list.

And speaking of hefty, how about them MP-style Decepticons now?