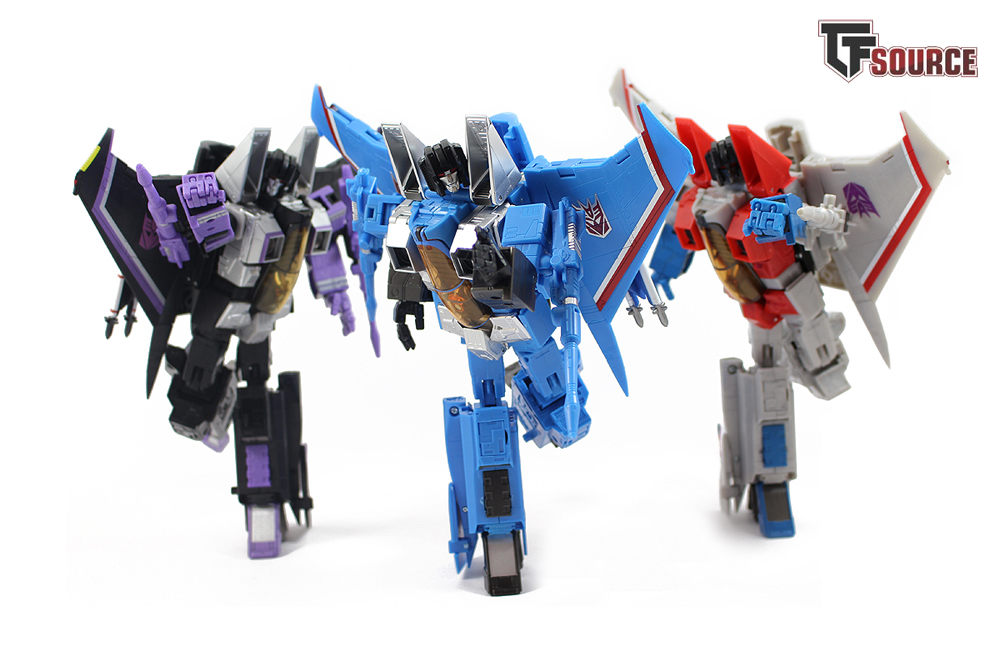 The close of 2015 saw a series of four Masterpiece Transformers repaints released within the space of a month, and ensured an extremely high quality end to another fabulous year of official MP product. MP-11T Thundercracker, MP-21R Bumble Red Body, MP-26 Road Rage and MP-14C Clampdown might all have been repaints of existing and well known, well-documented moulds, and they may well have been extremely predictable recolours, but they were executed brilliantly and can stand proud among their brethren. We take a brief look at each this week. 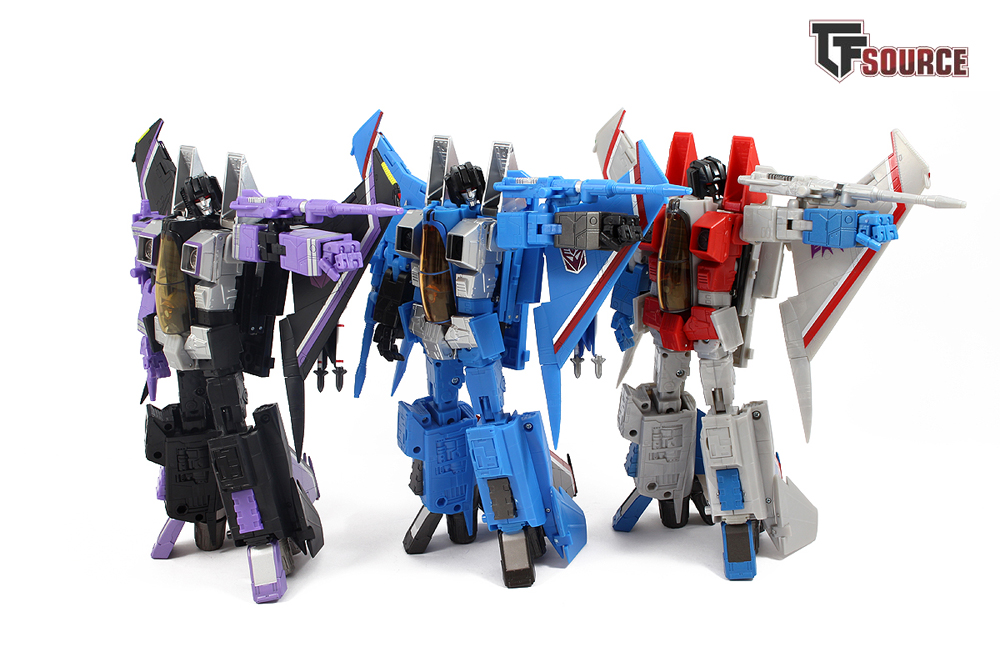 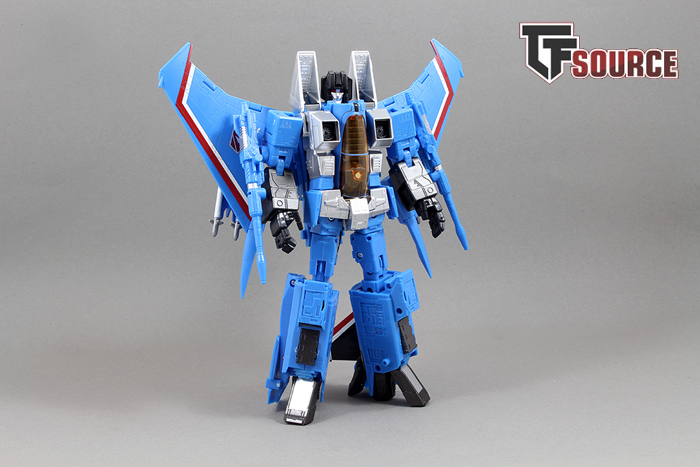 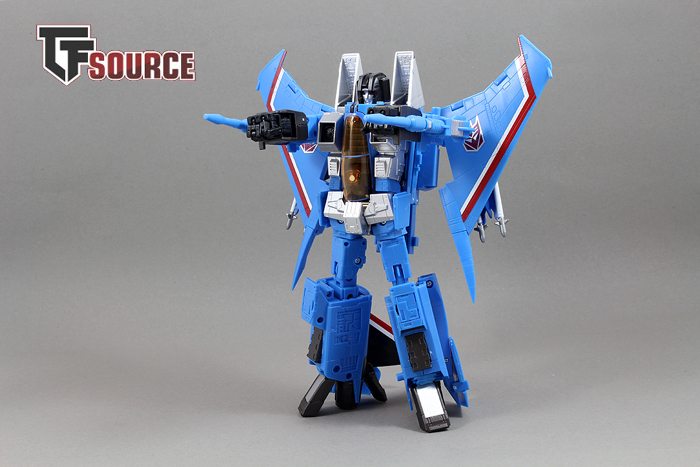 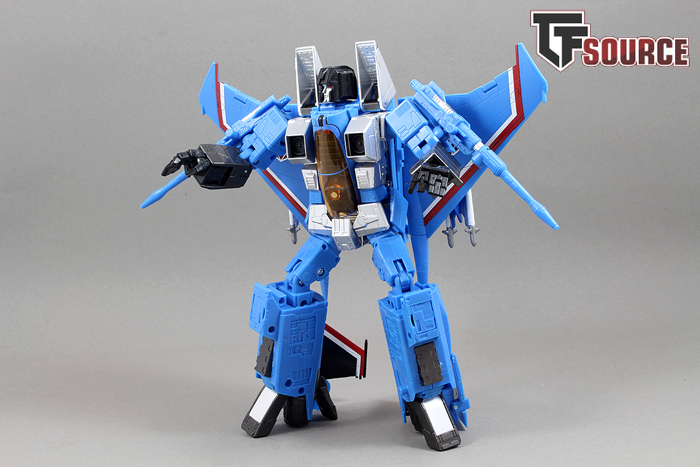 Although there are a series of unsightly sprue marks across Thundercracker, this has never bothered me too much as I am used to G1 and Diaclone accessories having prominent sprue separation points. However, there were enough aesthetic decisions made with MP-11T Thundercracker causing inconsistency with Starscream and Skywarp that some could literally take their pick of what to get upset about.

For a start, Skywarp stands out as having the forearm and shoulder stripes whereas Starscream and TC do not. Thundercracker’s Decepticon logos on the wings are slightly angled whereas the other two have them straight. Thundercracker’s crotch piece is painted silver where Skywarp’s is just moulded grey plastic. The orientation of the Decepticon logos on the wings is not consistent across the three TakTom jets either. Furthermore, the nosecone on Thundercracker is black like the toy and the Hasbro MP, a strange decision seeing as how they went to great lengths to reproduce a cartoon look. Why not colour the nosecone blue like the body and the cartoon? Skywarp came with a Megatron gun accessory, the other two did not. I must also comment that on my TC, it is very hard to snap all the jet mode panels into place and have them flush. I really struggled with it but achieved it eventually. Thankfully I had no paint defects, no duplicate hands or wings, no serious looseness. My only real gripe is the nosecone, otherwise this is one spectacularly beautiful repaint and one I feel was worth every penny I spent. I’ve kept the Hasbro TC too, because it’s just so gorgeous in that blue. 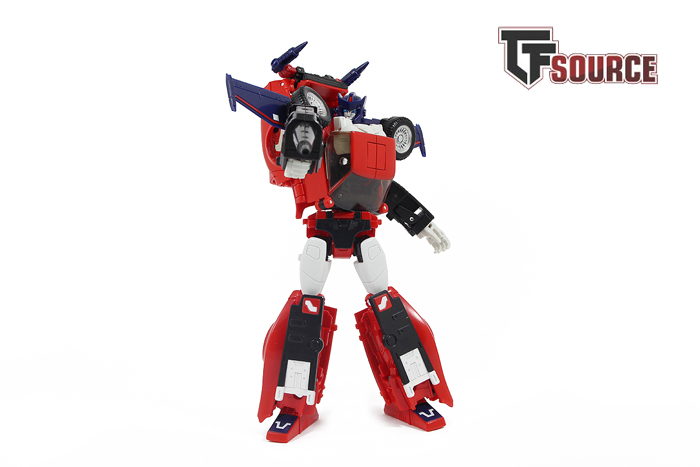 MP-26 Masterpiece Road Rage is an homage to the Diaclone roots of the Autobot Tracks, Released in red originally for Diaclone and even for Transformers in mainland Europe in 1985, this re-deco has a history. MP Tracks as a mould seemed to register at every point on the continuum with collectors, some calling it the best MP car and some the worst. For Road Rage – a name originating from the G1 Takara reissue exclusive from E-Hobby – we have our first female Masterpiece. Thighs, hands, head and handgun are re-sculpted, we’ve lost the flight stand and Raoul, plus the Blaster accessory has become Twincast. 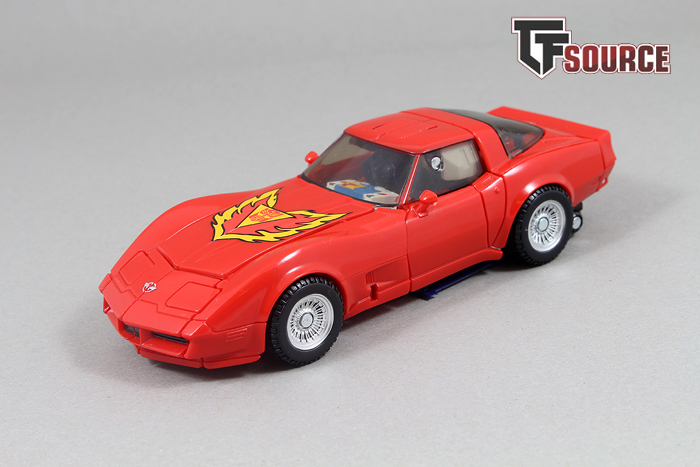 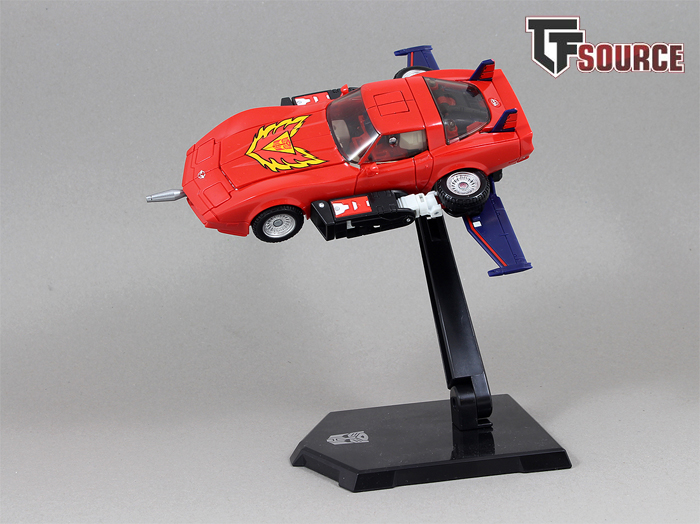 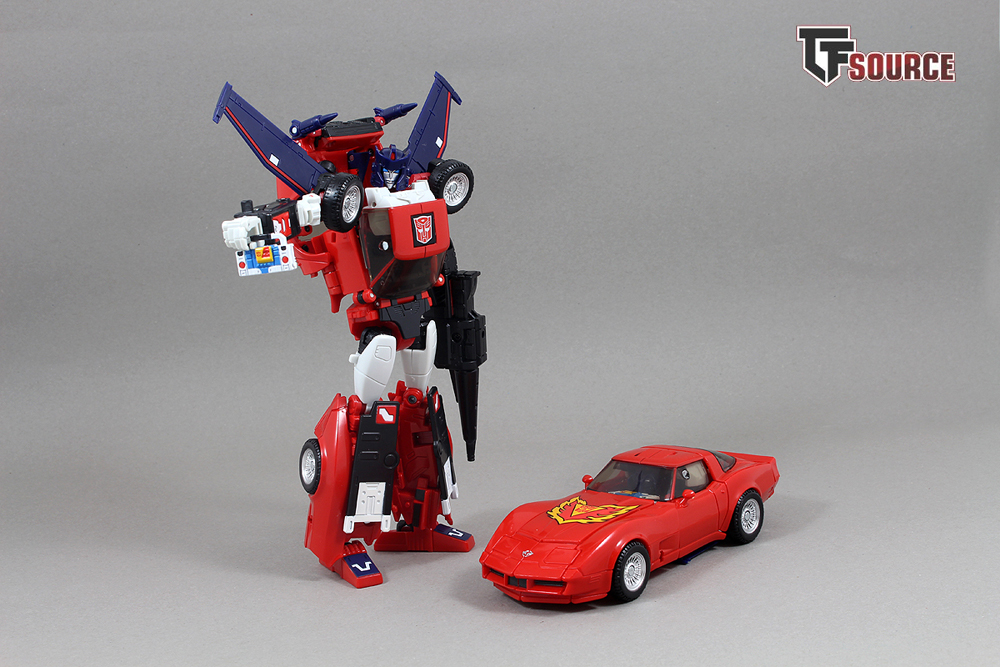 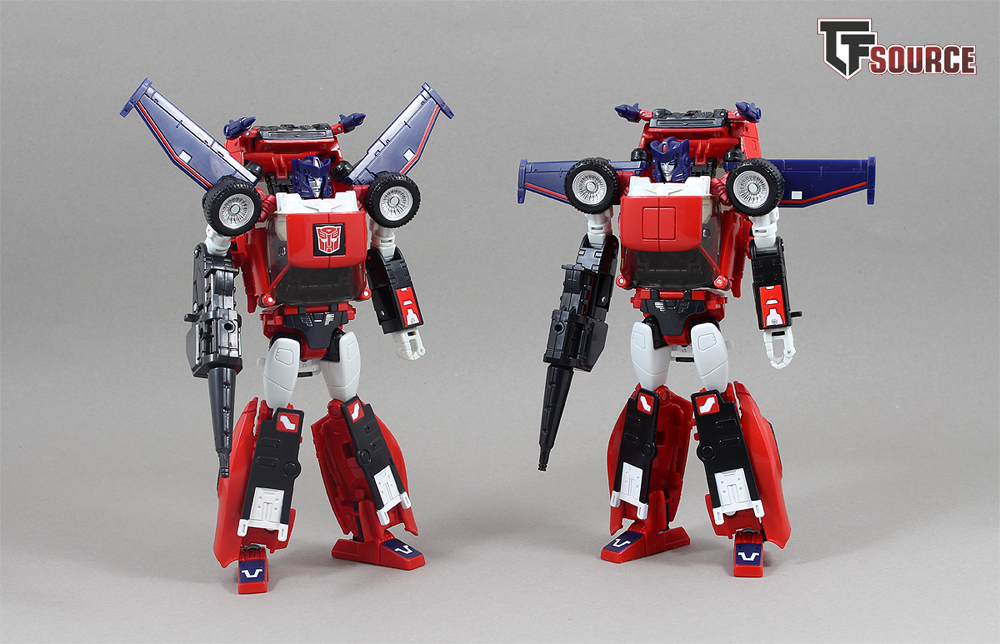 The hand gun now properly resembles a vintage Tracks/Diaclone Corvette hand gun, but the face, hands and thighs are aimed at reproducing a more feminine, elegant, curved look. All the issues that existed with Tracks are present here (hood separation, some looseness in knees etc), but I did find the mirrors much easier to attach. However, the hood on both Road Rages I had sat even less flush than on Tracks. So, we have a stunning red painted Corvette and a truly lovely robot mode, for a number of collectors representing an improvement on Tracks. Dropping the wings to shoulder level and not revealing the Autobot symbol can give Road Rage a more Diaclone look, but it is sorely missing a toy-style masked face. That said, the head sculpt used for Road Rage is superb. MP-26 is a mainline release, not an exclusive. You can see my Transformers Square One article on Masterpiece Road Rage for a bit more history and in-depth review. 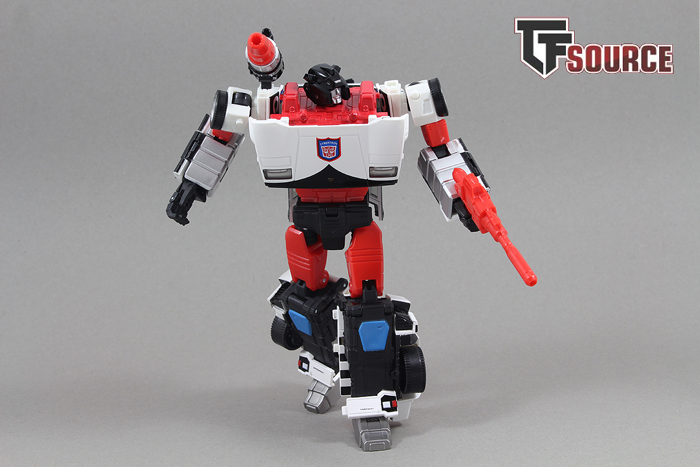 Another Diaclone repaint, another Takara Tomy Mall/Hasbro Asia exclusive. MP-14C Clampdown is an homage to the Diaclone police version of pre-Sideswipe, the New Countach LP500S. Widely regarded as the pre-cursor to Red Alert, Clampdown uses the MP-14 Alert mould with the different helmet, false shoulder wheels and different collarbone section. He also comes with 2 newly-sculpted pile drivers. The name Clampdown was first assigned to this recolour in the days of E-Hobby Diaclone-style exclusive reissues, so we are pretty justified in expecting a MP Deep Cover to go with this and Tigertrack one day. 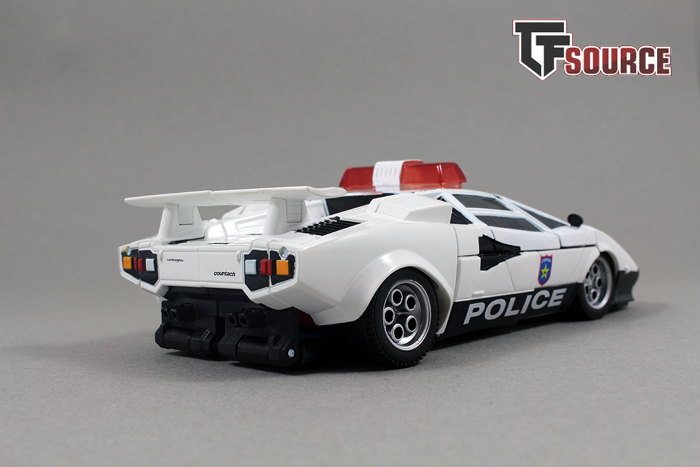 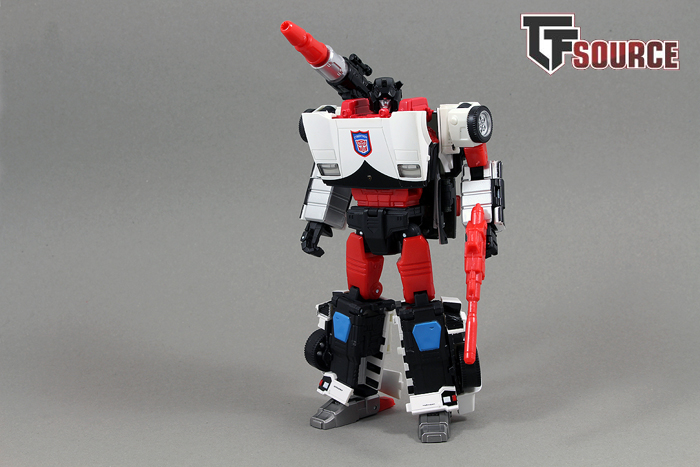 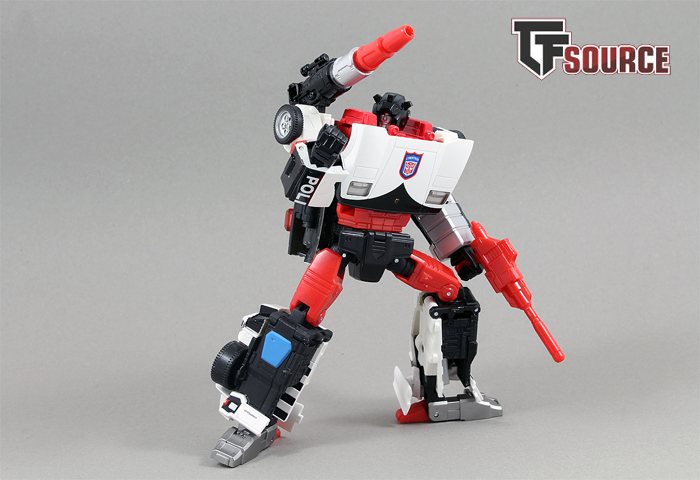 I can see why some would not feel attached to Clampdown. Unlike Thundercracker, he wasn’t in the show – hell he didn’t even exist as a Transformer pre-2002 era reissue exclusives. He didn’t appear as a TF variant in Europe or on the back of 1985 G1 boxes like a red Tracks (Road Rage) and he was not a common packaging variant in Transformers like the red Bumblebee, so why would anyone care about a toy that looks remarkably like Red Alert? Well, depends what you want out of your collecting. A beautiful repaint that stands out more than almost all other MP-12/14 releases? Check. A tribute to the history of Transformers from the ancient and revered Diaclone line? Check. In my case things like MP-14C represent my own collecting history made Masterpiece, this is my path into the hobby and my bread and butter. I sold my vintage Diaclones, this is my chance to have them back in a way. I am so pleased Takara Tomy continue to respect these diamonds and their TF heritage. A more in-depth breakdown of the history and this release’s features are available on my Transformers Square One article on MP-14C Clampdown. 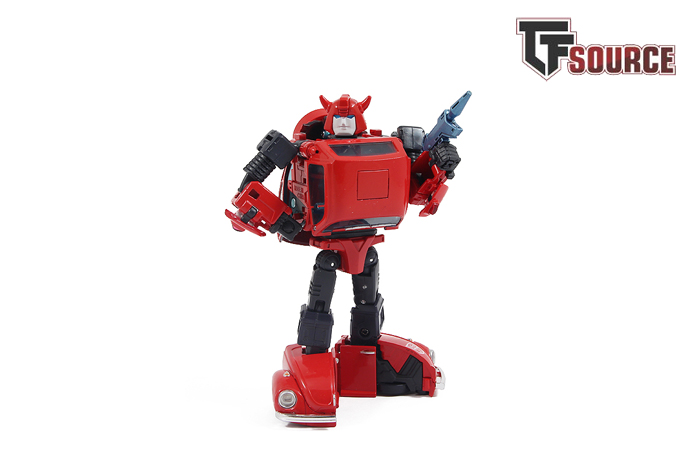 I was completely underwhelmed with the MP-21G Bumblebee G2 version Masterpiece release. I love this mould, I think it’s one of the best Transformers toys ever released, but the gold version, even with its backpack and battle mask, was one of the least interesting MPs I’ve ever bought. That made me sad. Red Bumble, somehow, completely recaptures the magic of the original MP-21 for me and has surprised me no end. Released at almost the same time as Clampdown – and again something of an exclusive and awkward to get figure – continues our end of year pre-Transformers repaint theme. 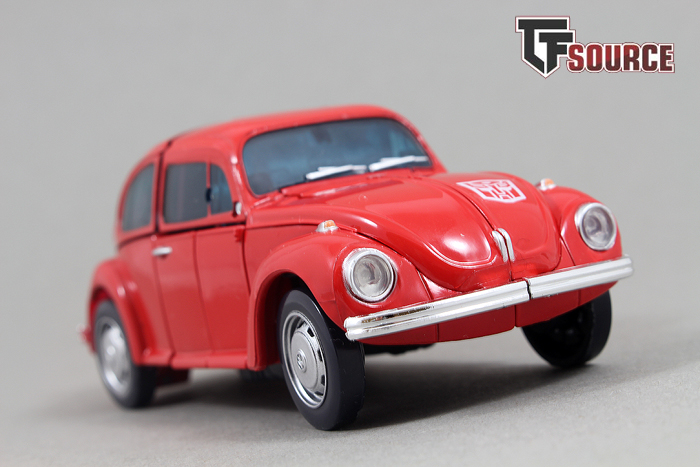 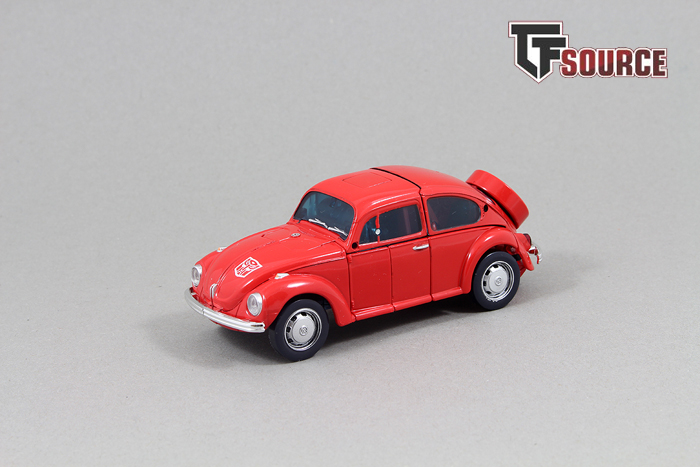 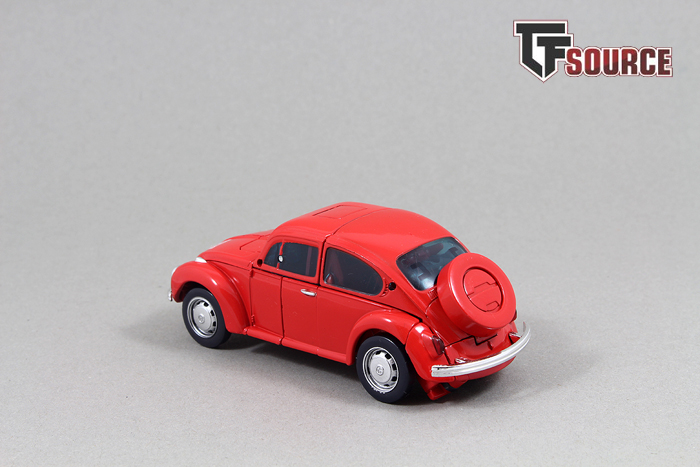 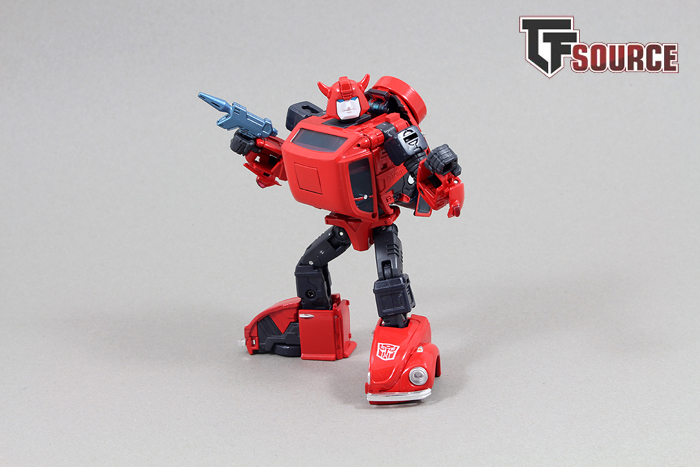 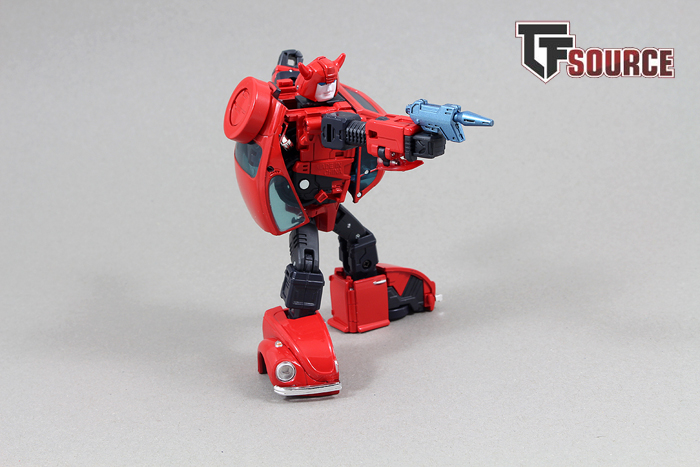 The Bumblebee minibot toy was originally one of the mini cars in the Japanese Takara Micro Change Series line, and came in yellow, red and blue. When the Transformers Bumblebees were released, a fair number of them were released in red (there’s even red art on cards), so a lot of people would have had red childhood Bumblebees, therefore making this a relevant repaint beyond just its pre-TF Micro Change Series roots. However, the lack of a battle mask will irk a lot of collectors whose only representation of red Bumblebee would have been the G1 masked toy.

My love for this figure is immense, despite the lack of a toy-centric battle mask that he ought to have had, despite the lack of anything really apart from an extra unmasked face with a mildly different facial expression. He is simply the base Bumblebee Masterpiece toy repainted (a lovely shade of) red, with chromed bumpers and a quite eye-catching pair of Autobot logos. I was absolutely certain when he arrived I would pop the humanoid face off and place the yellow Bumblebee mask on, giving him a quite cool yellow quiff (saw others do it and loved it). I needn’t have worried, the combination of red, black and that humanoid face work even better on Red Bumble than they do on the actual yellow one! Plus, you now seem to need to unscrew the head to get the face off. Some have even accidentally broken the face while removing it. A trivial but entertaining point, Bumble Red Body’s collector’s coin has his designation misspelled as “Red Boby”, and you get the feeling “Boby” will stick as a nickname for this toy. 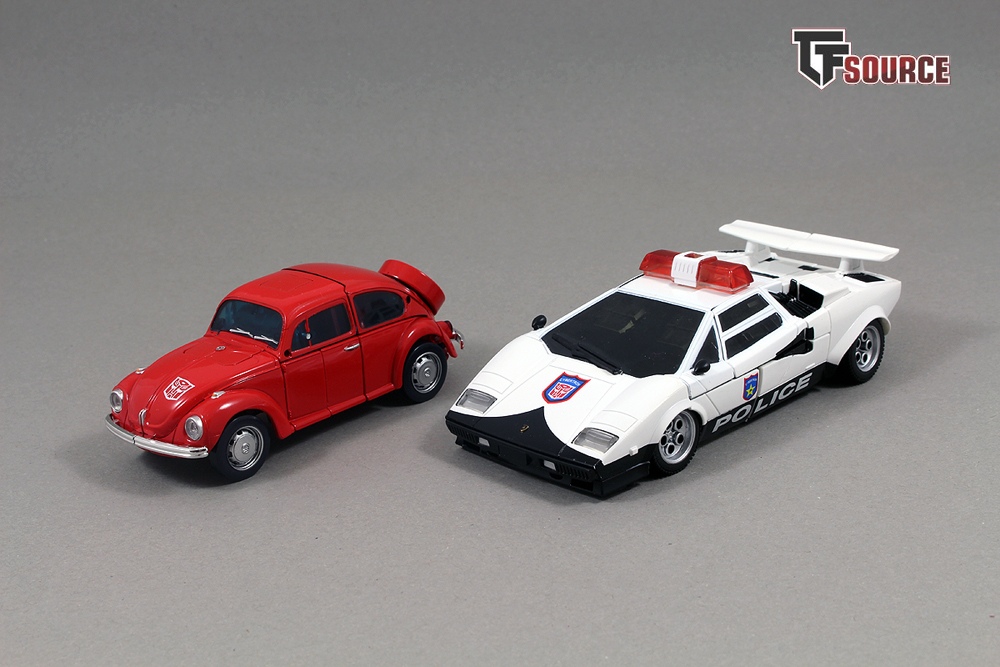 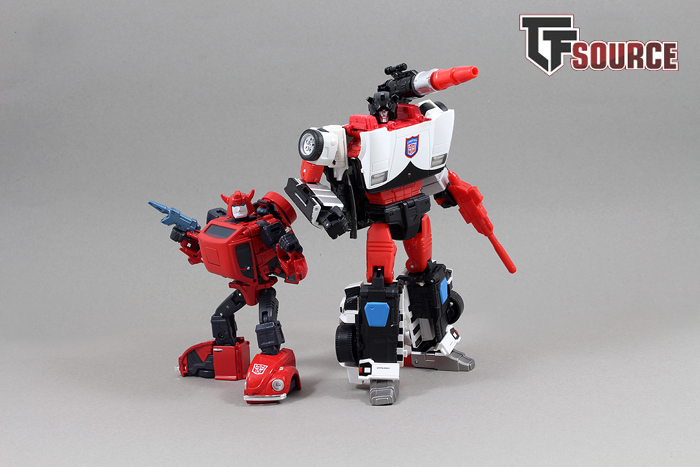 These lovely Masterpiece repaints are not fillers, I will argue with anyone who tries to claim that. Each and every one of these toys featured above have history and relevance. Without the Diaclone Corvette Stingray (Road Rage), Diaclone New Countach LP500S Police Car (Clampdown) and Micro Change Series Volkswagen (Bumble Red Body), there would be no revered Transformers characters like Tracks, Red Alert and Bumblebee.  These aren’t the repaints, these are the originals, they’ve just been given repaint billing in the world of Transformers. Thundercracker in these light blue colours also represents an enormously significant addition to the cartoon-centric collecting crowd of which I consider myself a member. 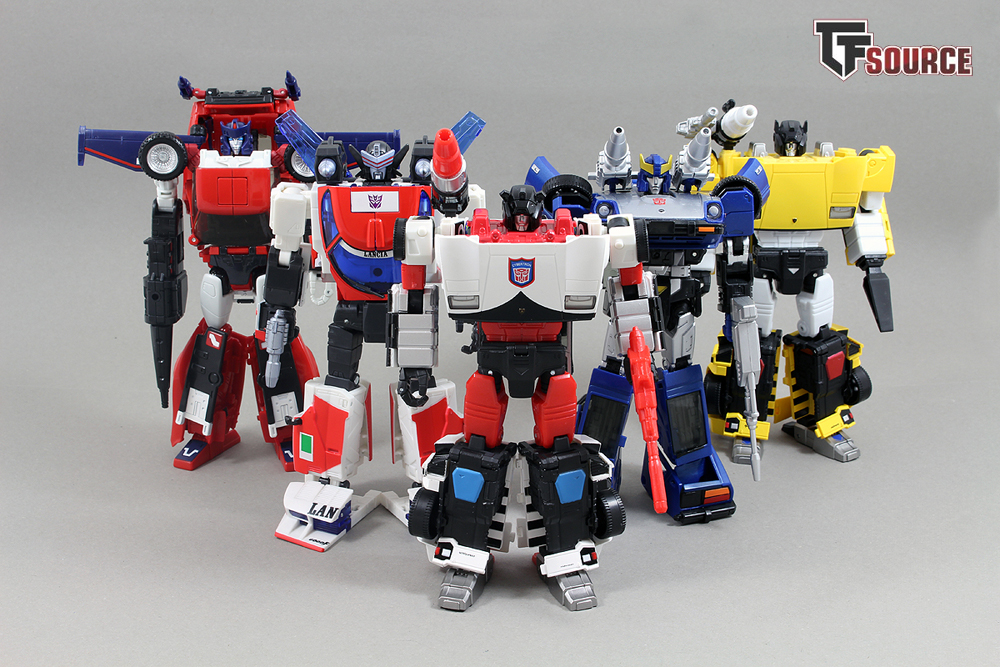 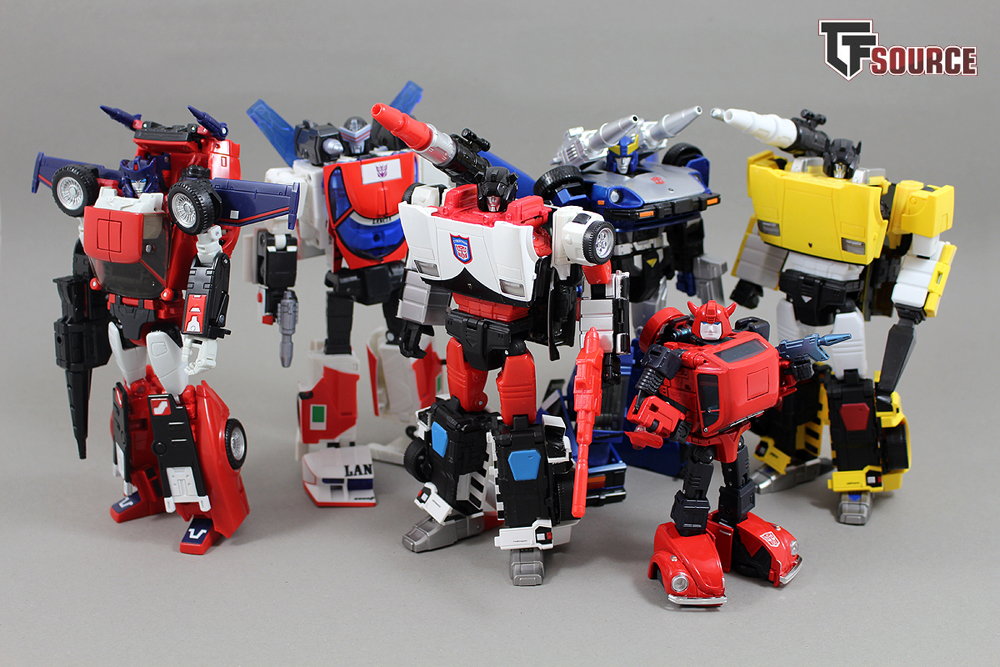 I also consider myself a member of the Diaclone collecting community, however many I might have sold, and the growing number of representations of Diaclone (and now MC) toys in the Masterpiece line mean that a truly substantial niche collection is growing within the MP movement. Look at that group shot above, all they are missing is a recognised leader, and once Takara Tomy finally get around to releasing a Powered Convoy/Movie Trailer version of MP-22 Ultra Magnus (already one of the best figures in the history of existence), the breakaway will be complete. Allied to the Diaclone V2 reboot of 2016, this area of Transformers is alive and well, gaining popularity, and I could not be happier. With Beast Wars MP figures on the horizon, we all better get used to the idea of Masterpiece Transformers being about much more than the G1 cartoon. Repaints? No. Resurgence. 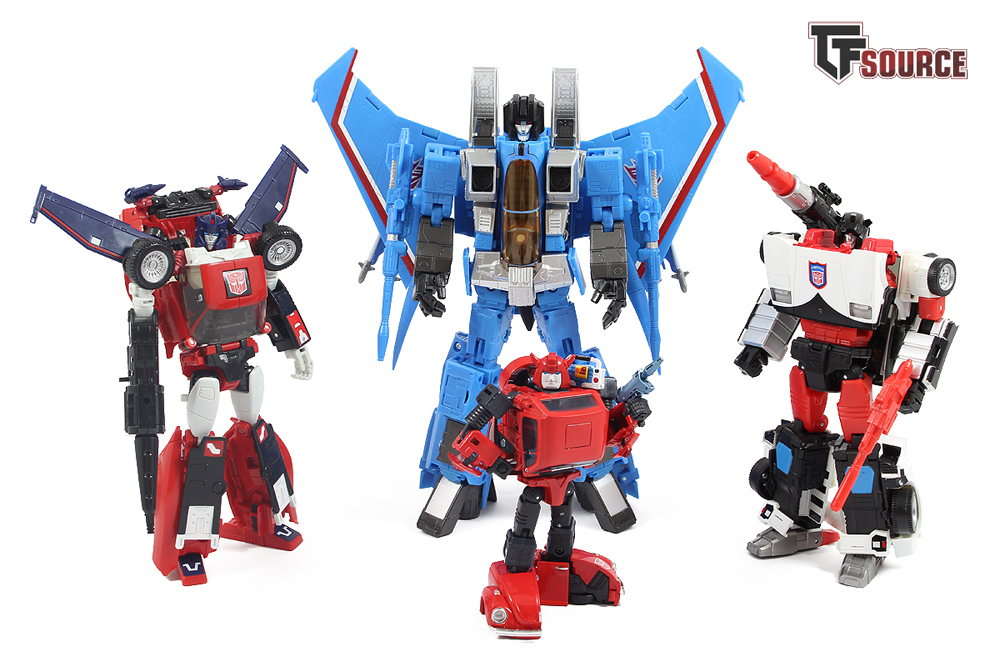