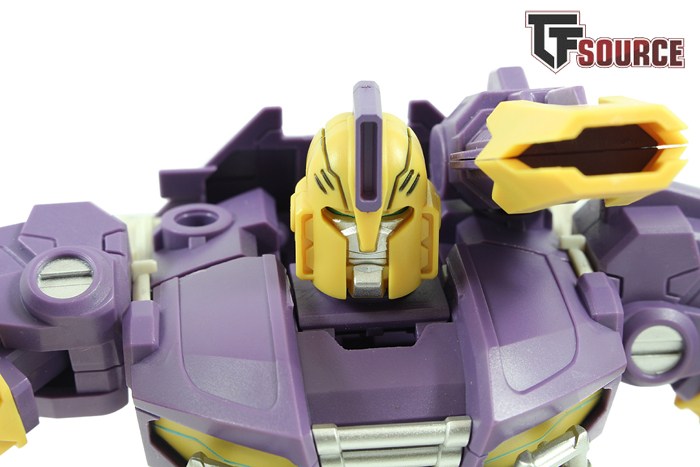 This. Is. Spartan. Mastermind Creations have finally given sections of the Transformers fandom a figure they have been craving for almost 30 years, Impactor. Of course, MMC’s Reformatted R-13 is called ”Spartan” and is based heavily on the IDW design for Impactor, as seen in Chaos Theory and Last Stand Of The Wreckers. Fans of the Marvel UK Transformers comics rejoice, the leader of the Wreckers is finally available in toy form – just ahead of the official Impactor that the official Collector’s Club will offer as a Combiner Wars repaint and in place of the never-released iGear Presser. 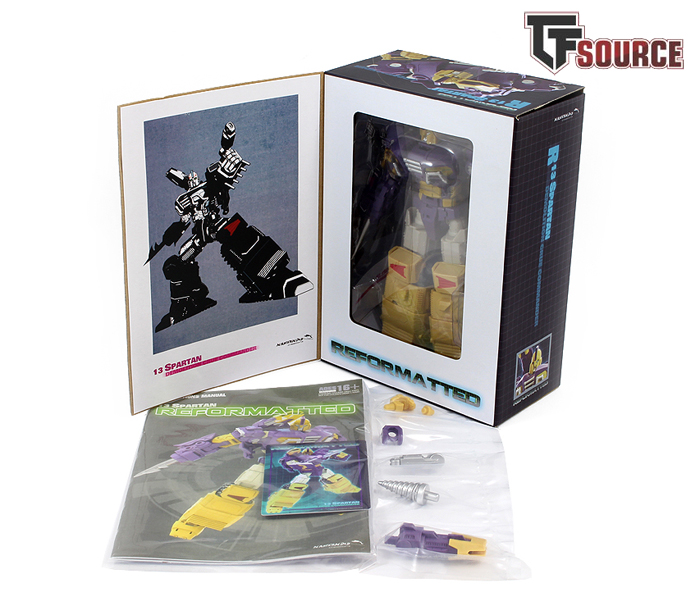 I neither grew up reading Marvel UK comics, nor played the Metal Slug video game series, so the enormous significance of this release is a little lost on me. I am an Impactor and Metal Slug philistine. The reason the Metal Slug reference matters is because Cassy Sark, this figure’s designer, modeled the alternate mode after the Metal Slug tank as seen in the series. The robot mode, though, is pure Impactor. I’m just glad I’ve gotten into IDW comics and had the opportunity to familiarise myself with his more recent fictional exploits in lieu of what made him so loved originally by Marvel UK fans. MMC Spartan comes with a number of different hand attachments, the mini-comic/instructions, collector’s card and a connecting peg for tank mode. The packaging is much like the rest of those released in the Reformatted line, attractive and sturdy, much like Spartan himself. 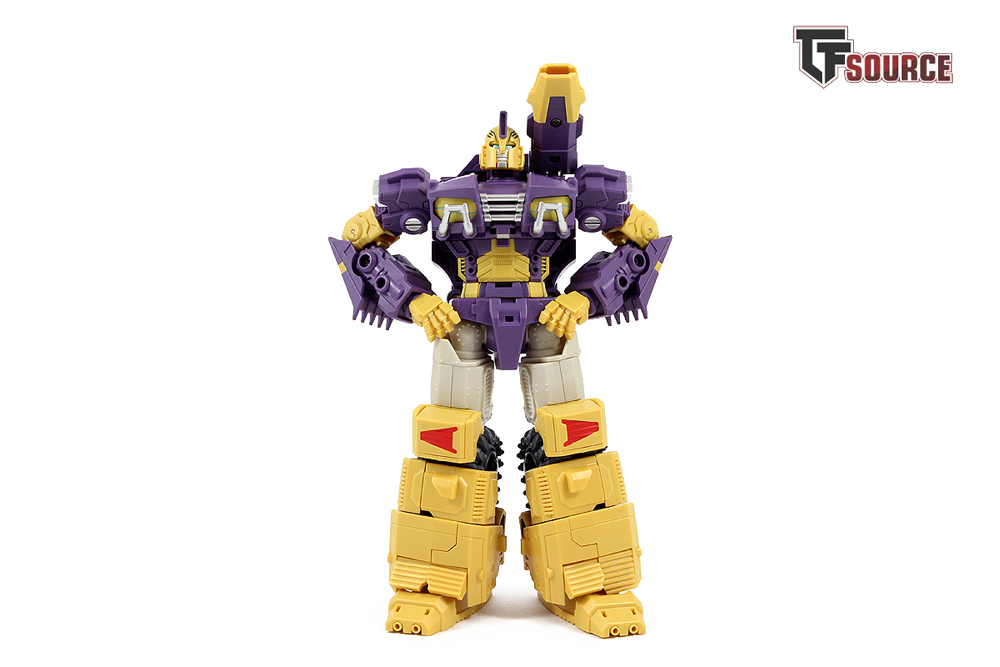 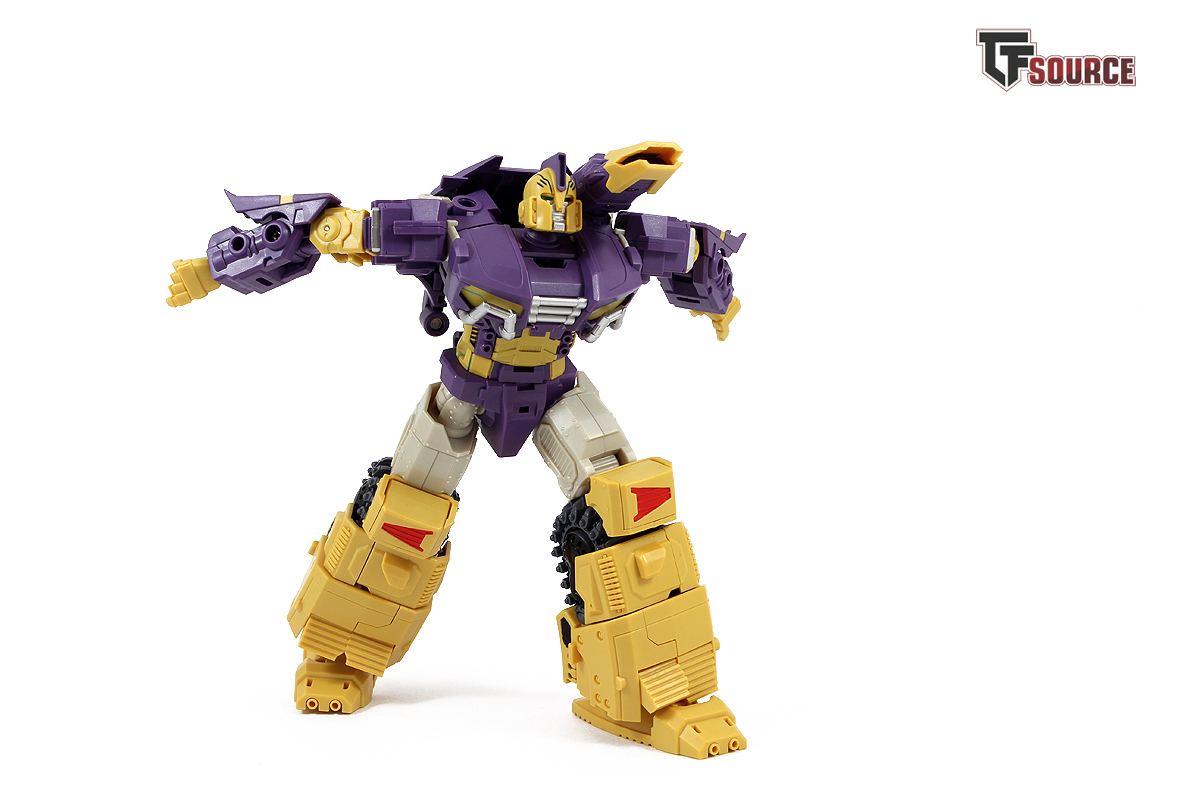 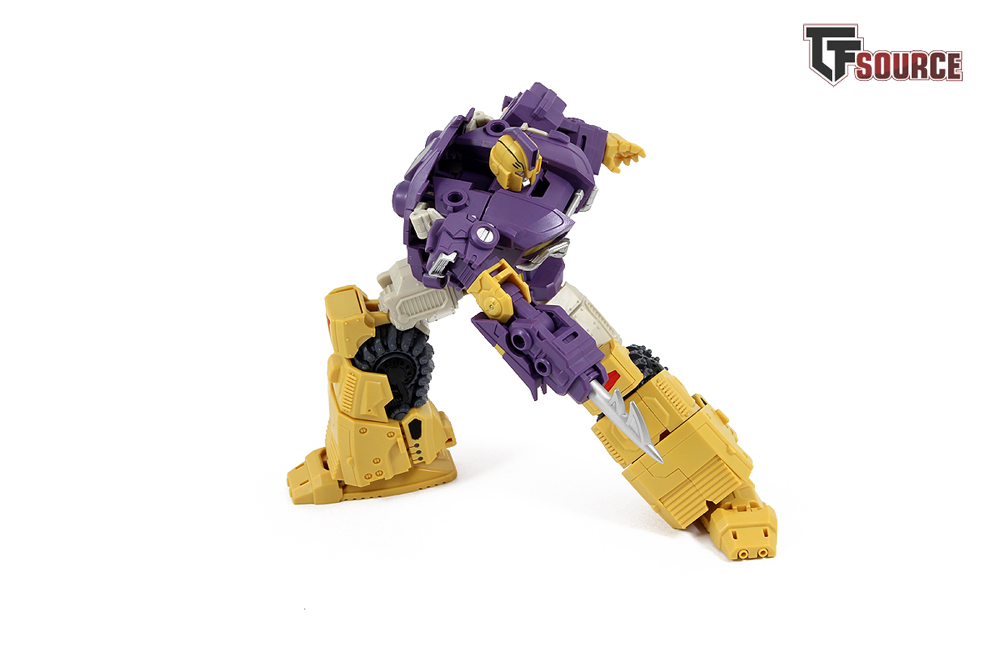 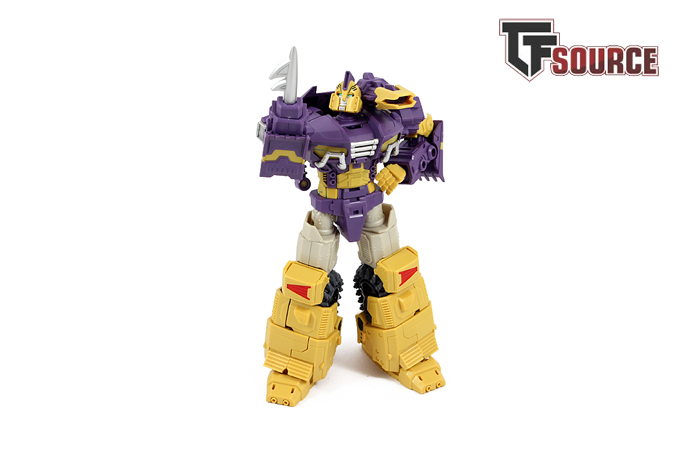 In robot mode, straight out of the box, Spartan is superb. This is MMC’s forte, creating beautiful sturdy robots that have stunningly heroic proportions, are enormously faithful to the source material that inspired them, and can be posed in ways that only your imagination limits. While Spartan is not quite Azalea-flexible, he has Bovis-style feet on ball-jointed storks and flaps at his ankles to allow for a very good range of movement and dynamism in posing. 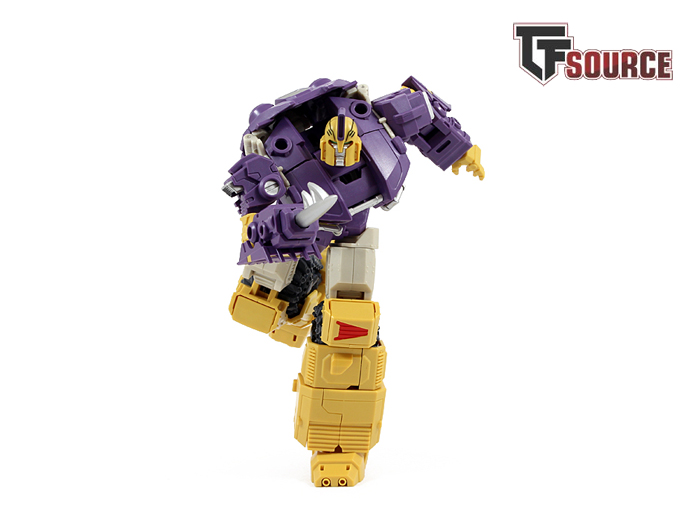 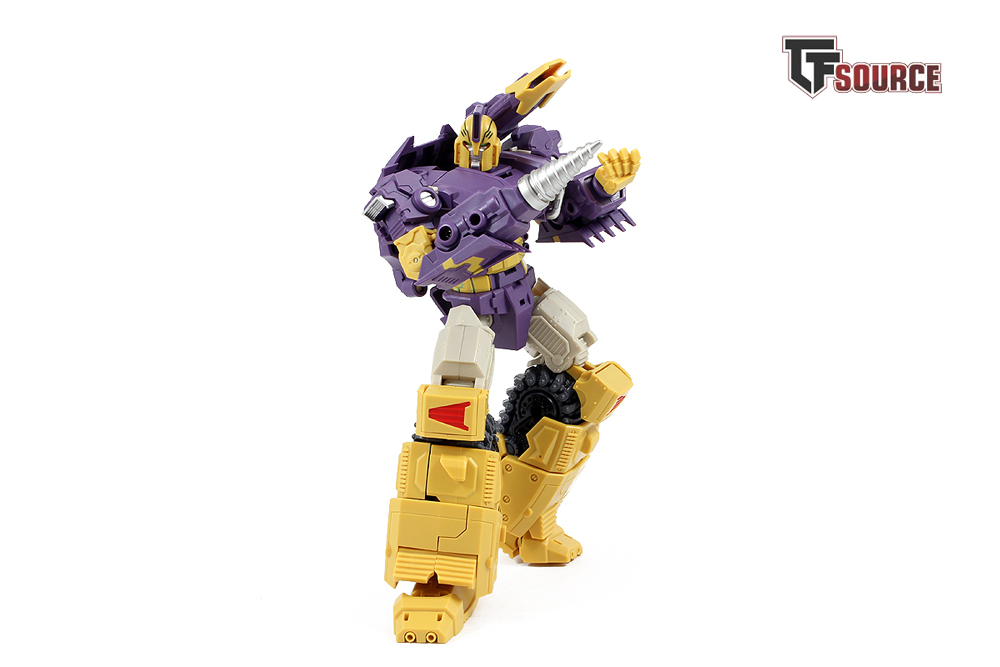 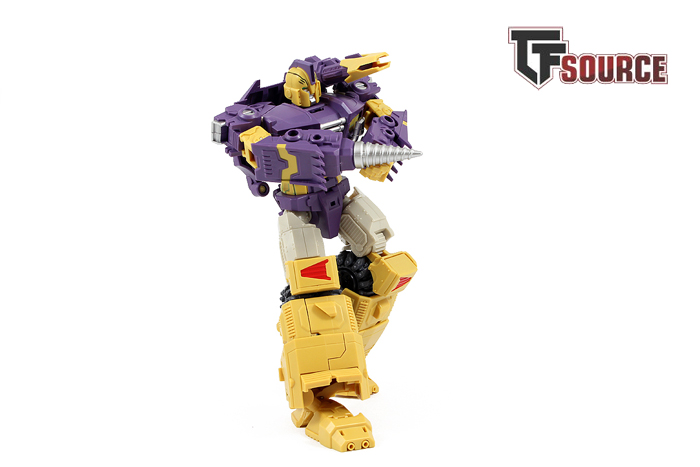 An IDW-inspired drill (Chaos Theory), a more traditional Impactor harpoon or regular hands allow you to customise how Spartan rocks a shelf. The weaponised attachments need the extra purple clip attached to the wrist before you can arm him with them, and you get two of them. There is a lot about Spartan that reminds me of the Feralcons, especially the bulk and feel of the parts and the philosophy in design. The colours are very matte and contrast beautifully, although I realise that Impactor fans may have wanted something more vibrant and possibly orange. 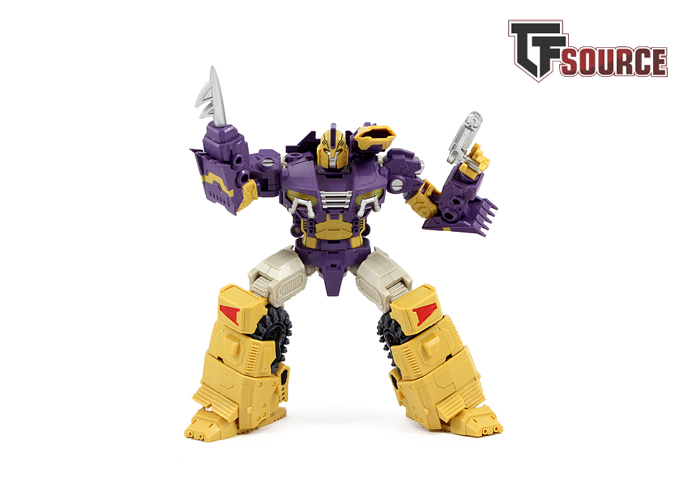 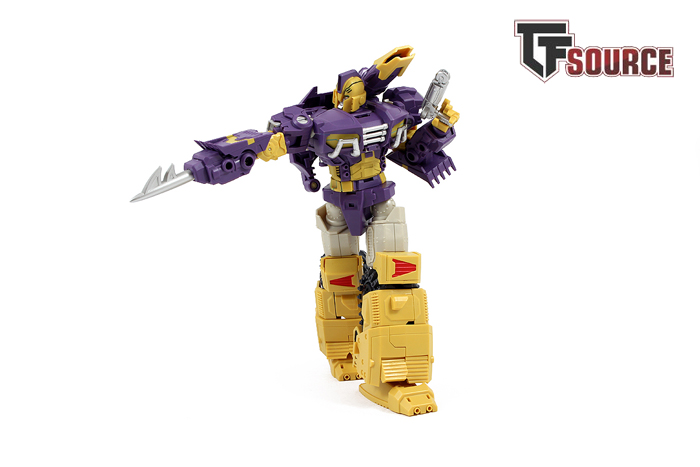 There is quite a limitation in what Spartan can do in terms of thigh articulation, and yet despite that he can pull off my favourite running pose, he can sooooort of kneel, he can manage all manner of convincing battle stances, leans, walks etc. Arms are very highly articulated as well, although the panel used to clip the right arm to the torso always un-pegs when I move the right arm. In addition to that, when the elbows are flexed too much, the shovel-like attachments that make up the front of the vehicle pop off easily too. Annoying. Paint application is lovely, visually he will take your breath away if you have any affection for this character, and even if you don’t you’ll be moved by his proportions and stature. Other significant plus points are that his head sculpt truly is magnificent, totally Impactor complete with teeth-baring snarl. The stun gun can be slotted into the regular hands, but they are moulded as is, so no closing or opening fingers/fist. The articulated tank cannon can be mounted on either shoulder, I’ll admit to taking a degree of pleasure mounting it on the ‘wrong’ shoulder for some pics to irritate my Marvel UK-worshipping friends! 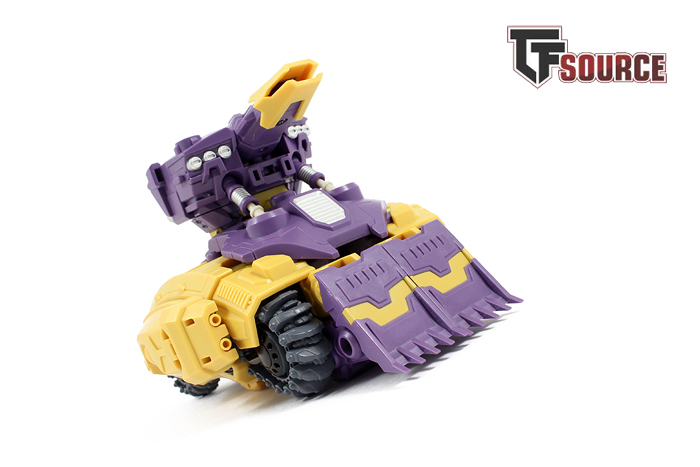 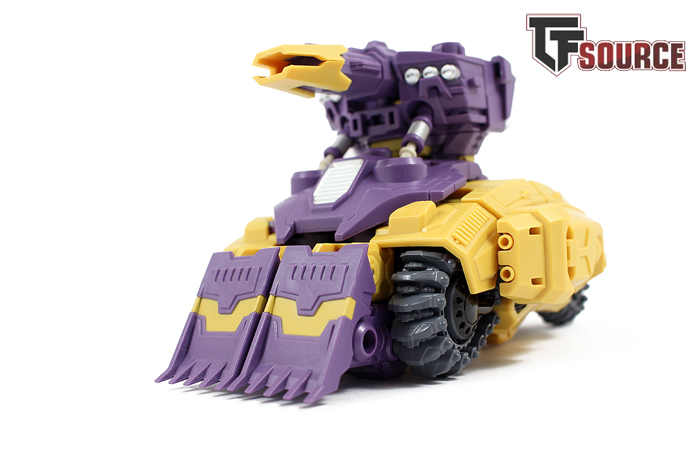 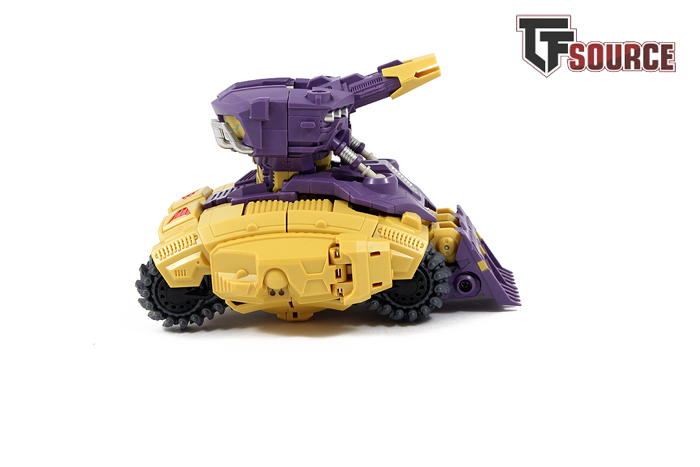 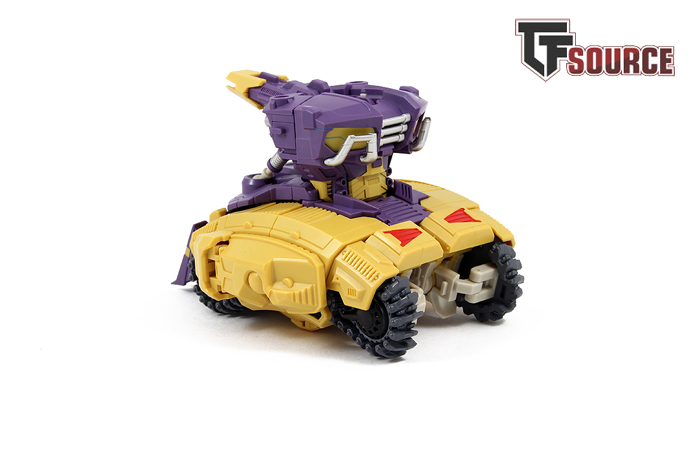 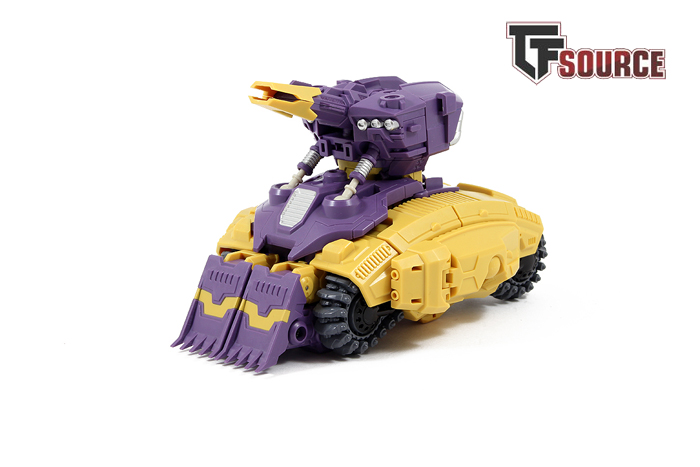 Here’s the alternate tank mode, the Metal Slug mode. It’s compact and brutally attractive – yet cute – in its own way, but I’ll be honest and say I am not a fan. There is no rolling, and while I did not expect working treads, even those crappy small G1 wheels underneath some figures like Blitzwing would have provided some amusement. Getting Spartan into this mode was pure frustration as well, the instructions not being clear at key sections, namely the connecting of the robot backpack to the waist. There are some really fun and clever steps in the transformation of the torso, such as the piston/shaft connection, but trying to get the tabs lined up and properly clipped in when wrapping the transformed legs/treads/sides of tank to the main body and crotch plate…let’s just say the first time I actually managed it, I knew I had to set up the camera equipment and get the photos while I could. I may try this transformation out of a morbid bloody-mindedness (much like Azalea) once again, but for now I’ve got no desire to repeat it. I do wonder how folks will feel about the little double-sided yellow peg that is required to keep the transformed arms better connected in tank mode. No bother for me, I’m not against partsforming.

Being a glutton for punishment, and not being able to handle a mistransformation, I just went back to Spartan to try and get everything perfectly transformed like that one magical occasion, and it worked. Getting the three rotating sections of the waist perfectly – and I mean perfectly – central and aligned is the key. 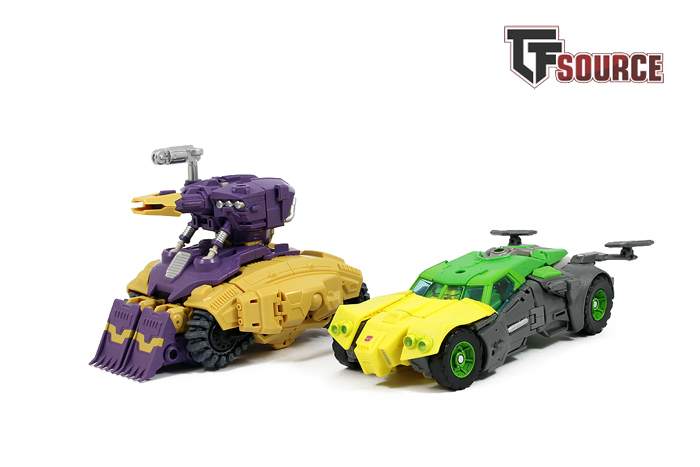 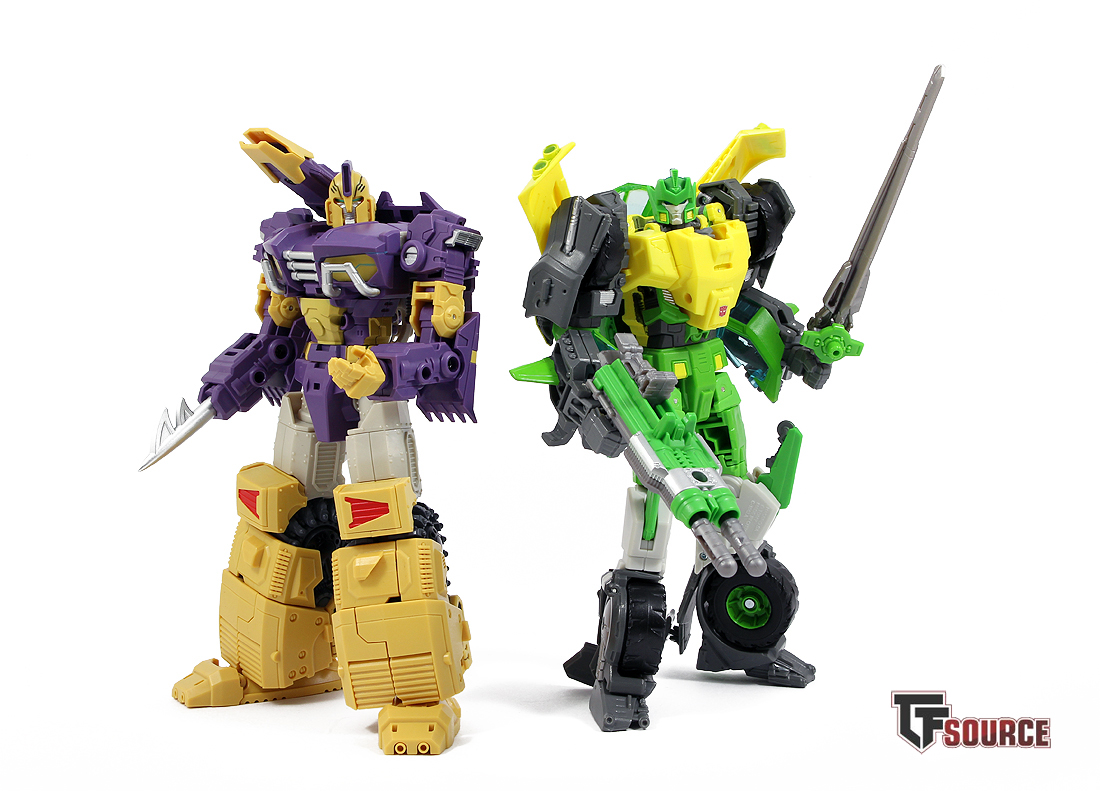 In terms of scaling and comparison to other figures, he’s a perfect fit for Generations Springer, his second in command and successor and obviously a figure that MMC expect people to display Spartan alongside. This is the absolute strength of Spartan, and its biggest success. How Spartan looks alongside the Demolition Crue, Gauntlet, various Generations bots and the like completely justifies his existence, and that’s to say nothing of the sheer joy it brings fans of the character who have wanted a proper representation in toy form for nearly 30 years. 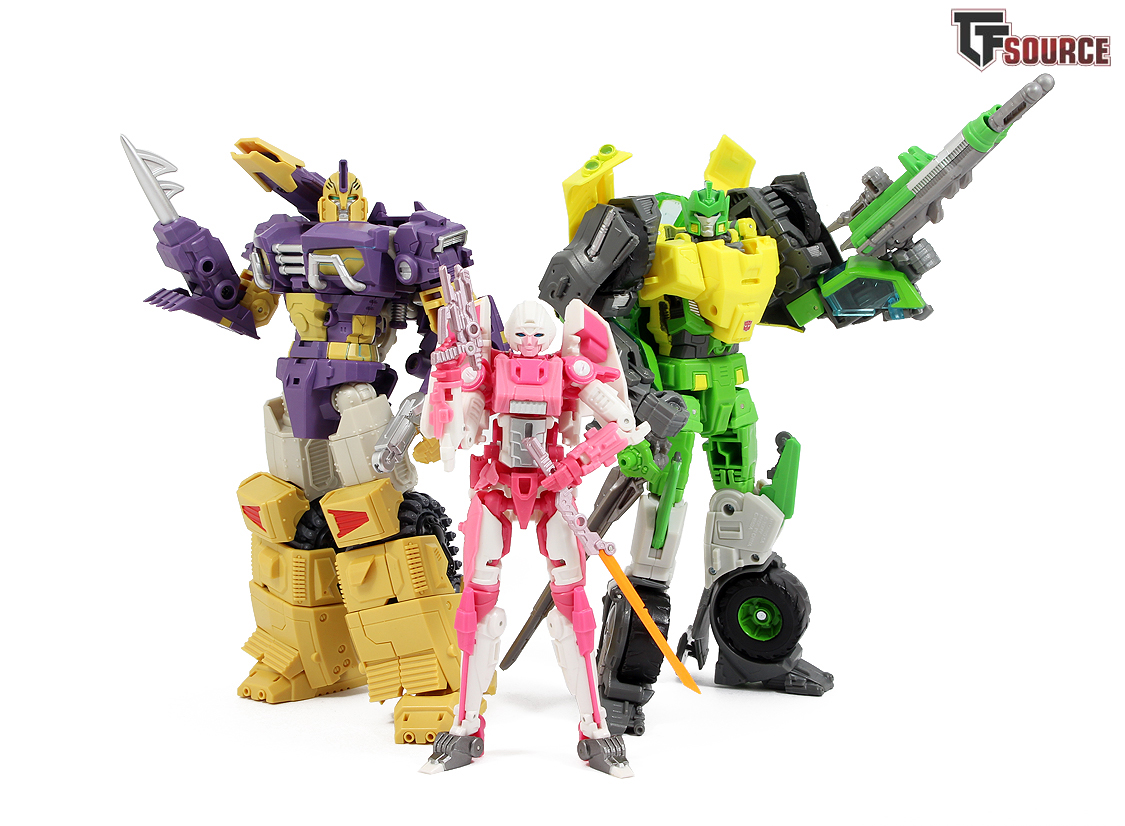 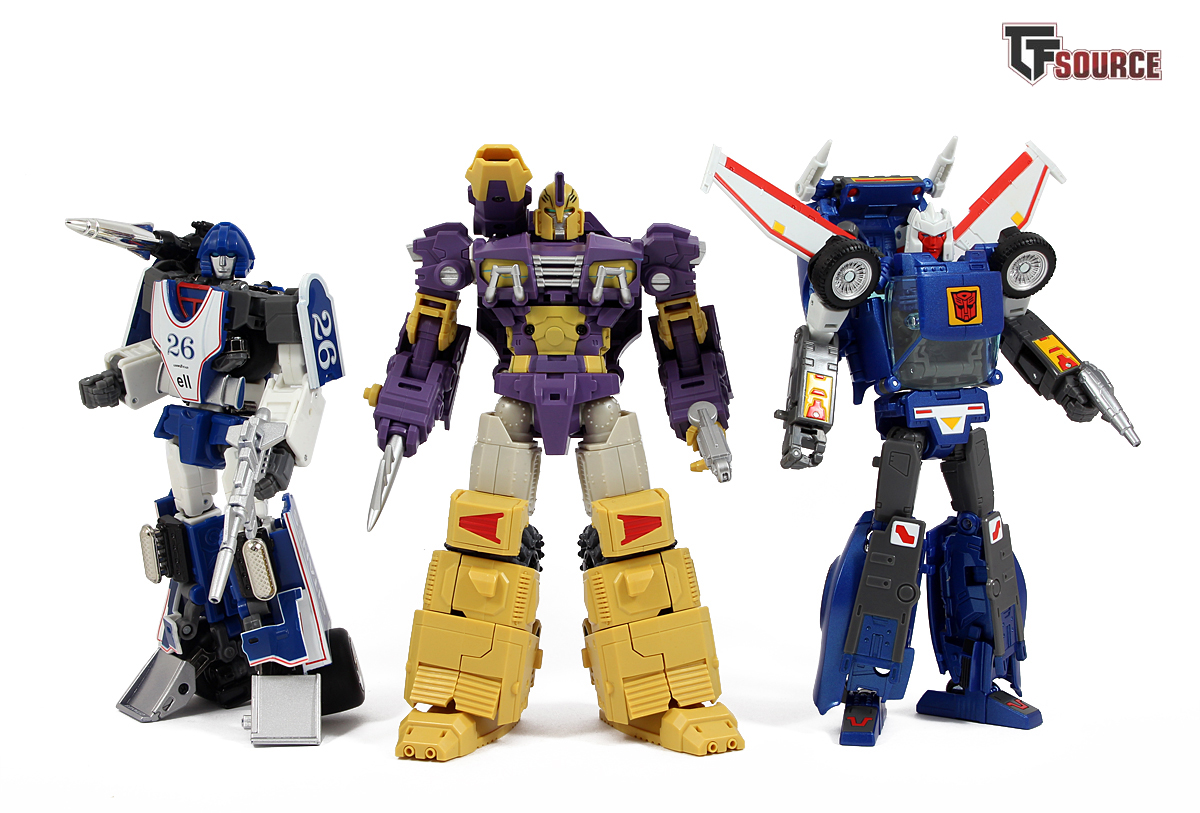 The transformation and alt mode aren’t great, they did frustrate me. I prefer Azalea’s transformation a hundred-fold. The un-clipping and popping off of parts when posing bothers me too, even if they stay put if you hold appropriate parts together when moving the arms, so I’m left with the prospect of a character beautifully represented, but static. However, that static robot is spectacular, truly. I’m no Impactor or Wreckers fanboy, but Spartan positively nails the aesthetic and look of this character, and he is every bit the fearsome bruiser and warrior you’d expect him to be. It is an uncompromising robot mode visually, with the capability of pulling off and holding – with ease – some gorgeous poses that fully show off an array of relevant, signature weaponry and, most importantly, expression. You will look at Spartan and completely believe it’s the Impactor figure you’ve dreamt of for 30 odd years (or 5, if you came to love him in LSOTW). You wanted Impactor, this is a damn fine Impactor and a damn fine robot, just not a damn fine Transformer. Those looks, though, amazing.

You can get your MMC Reformatted R-13 Spartan at TFSource 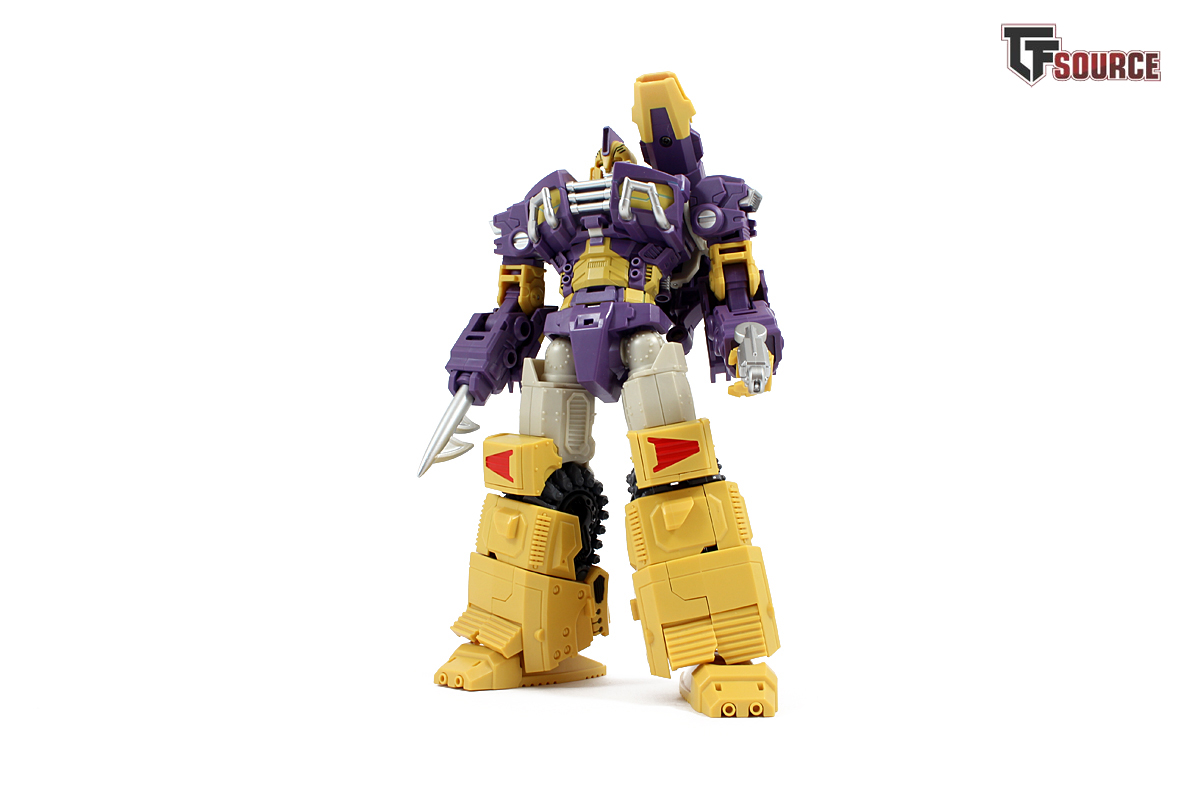