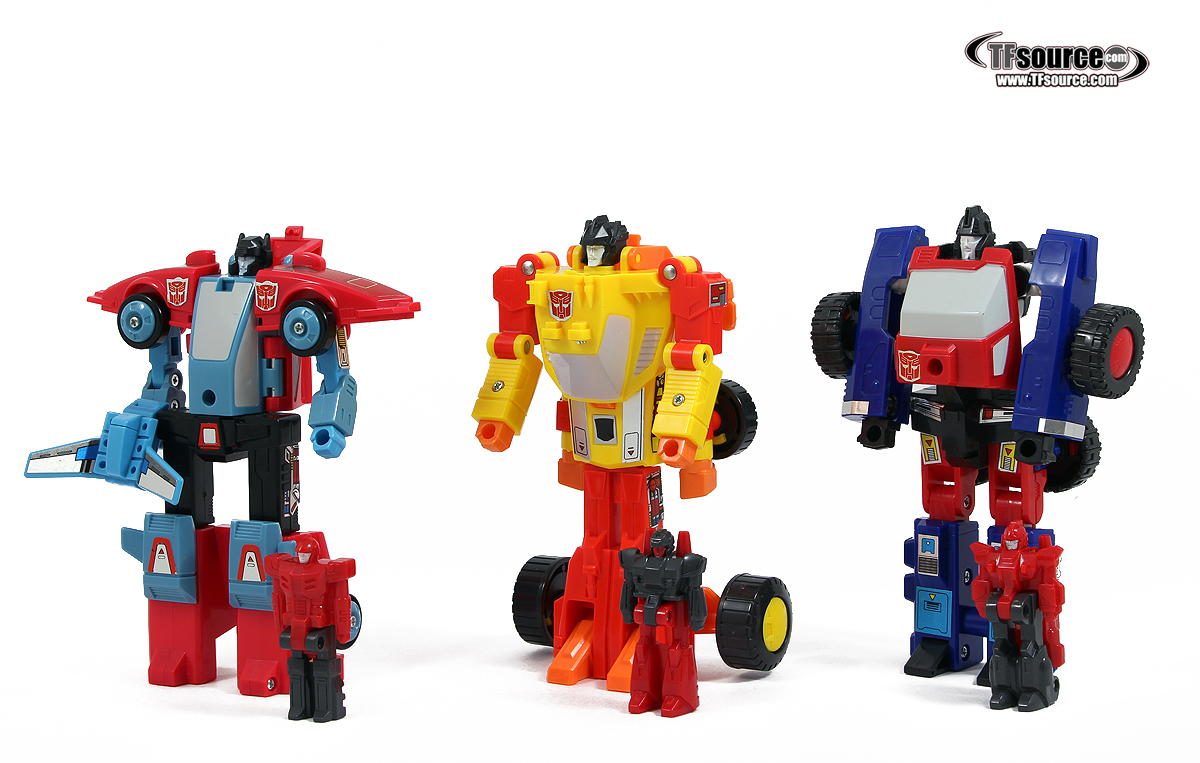 1987 was an exceptional year for the Generation 1 Transformers, arguably the best depending on your persuasion. There is an awful lot of justified affection for the Diaclone and Micro Change Series era moulds that Hasbro used throughout 1984 and 1985 (even 1986), but the post animated movie futuristic designs that Hasbro and Takara created purely for The Transformers stand proudly on their own in 1987. From Headmasters to Targetmasters, Sixchangers to the enormous bases and Monsterbots to Clones, Transformers was enjoying a great period. A period that may be even more appreciated today than it was at the time. A few weeks ago we looked at the three 1987 Decepticon non-movie Targetmasters, and this week our gaze falls upon Pointblank, Sureshot and Crosshairs, the 1987 non-movie Targetmaster Autobots. 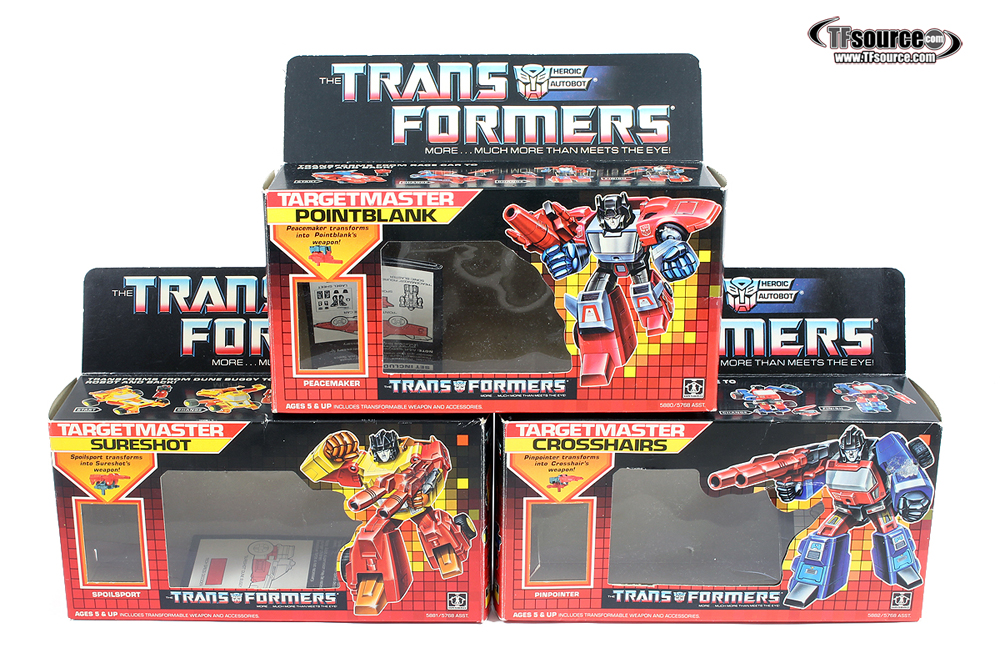 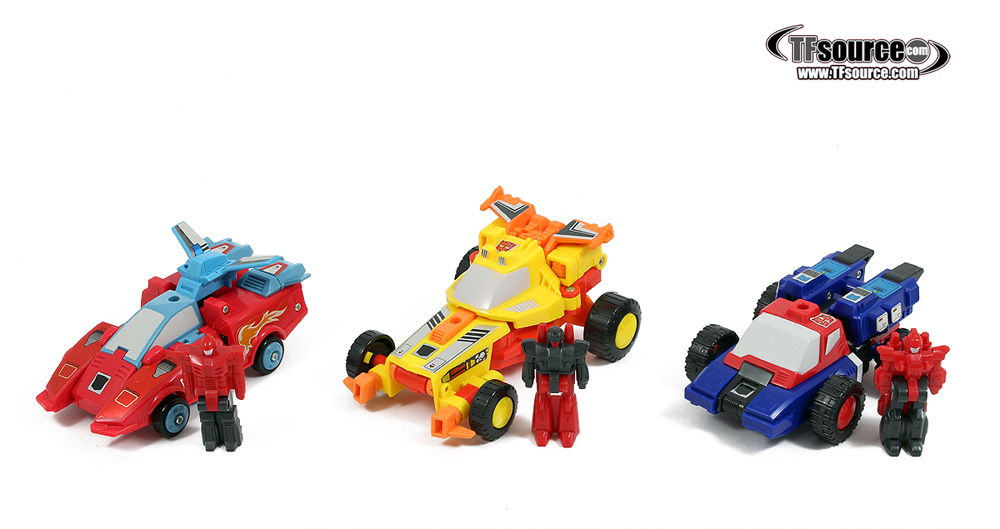 The role of the binary-bonded Nebulan partners has been well documented across our series of articles on 1987 Autobot and Decepticon Headmasters, as well as Decepticon Targetmasters. The Autobot Targetmaster Nebulans are no different, being comprised of the freedom fighters on Nebulos opposing The Hive. The sharpshooters were picked to become Targetmasters for not only Pointblank, Sureshot and Crosshairs, but also Hot Rod, Kup and Blurr. There were six Autobot Targetmasters compared to five finalised and released Decepticons (one Decepticon TM jet didn’t make the cut). So Pointblank bonded with Peacemaker, Sureshot with Spoilsport and Crosshairs with Pinpointer.

The packaging for the Autobot Targetmasters, while following precisely the same theme as the other 1987 ‘Masters boxes with the digital sunburst and peep-window for the Nebulan partner, just seems to work even more harmoniously with the colours chosen for these toys, especially Pointblank and Sureshot. The character artwork for these guys is spectacular, truly breathtaking even by Generation 1 standards. In terms of value, the second hand market seems to contain more Autobot Targetmasters than Decepticons, and that’s certainly true of the Nebulan partners as well. You can undoubtedly pick up complete Pointblanks, Sureshots and Crosshairs cheaper than you’d get a Misfire, Triggerhappy or Slugslinger. Then again, the Autobot counterparts are far less prone to discolouration and breakage, so that has to be figured in. 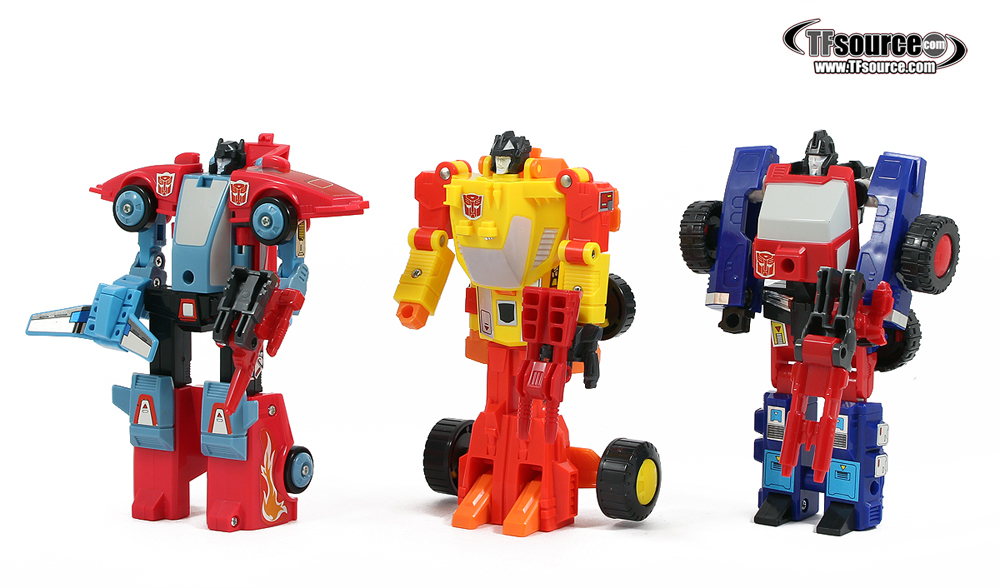 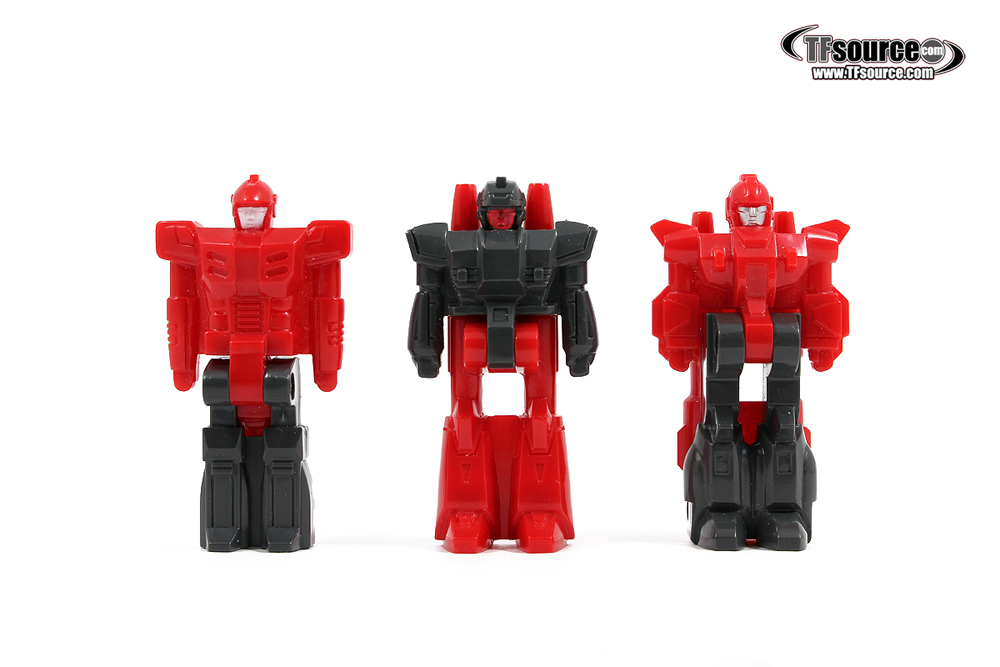 From left to right above we have Autobot Nebulan Targetmaster partners Peacemaker, Spoilsport and Pinpointer. The names for these guys are still loosely connected to the concept of weaponry and accuracy, but certainly less so than the names of the main Autobot Targetmaster figures themselves. Just as with the Decepticon Targetmaster partners if not moreso, the Autobot Targetmaster Nebulans have a very uniform colour scheme across the board. Dark grey and red is the theme here as opposed to blue and grey with the Decepticons, not entirely surprising. What is fascinating is that these three Targetmaster Nebulans have the handles on their backs unlike the Decepticon versions that have them on the chest is very visible in robot mode. The result is a much more humanoid and clean looking front profile. A significant improvement in design and moulding over the Decepticon versions can be seen on these three, instead of the oddly shaped rod that causes stressing and breaking during transformation, the Autobot guys are pivoted on pins so the transformation is smooth and causes no damage to the Nebulans. 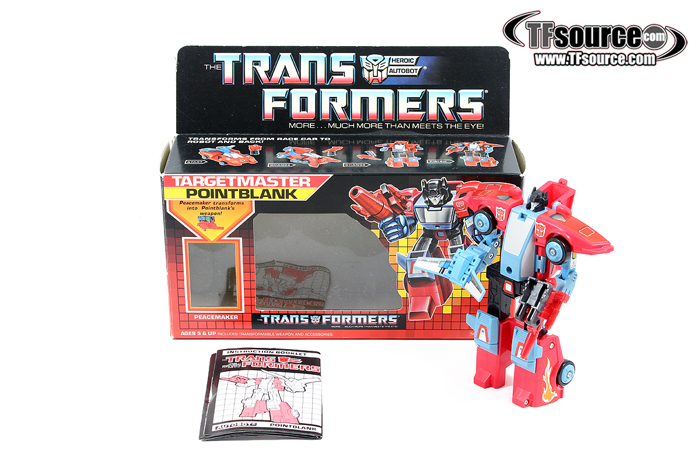 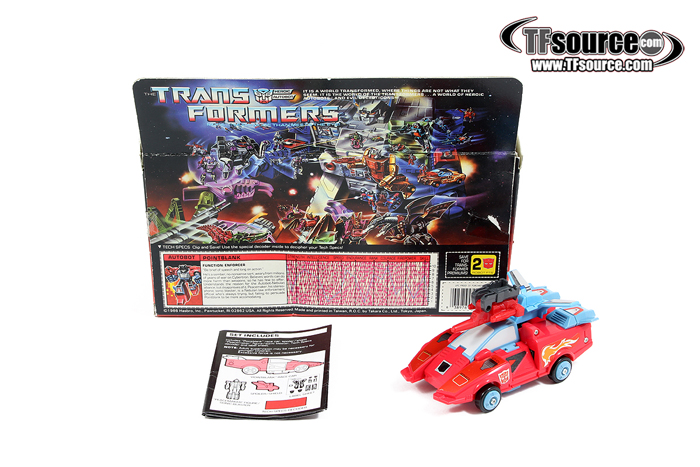 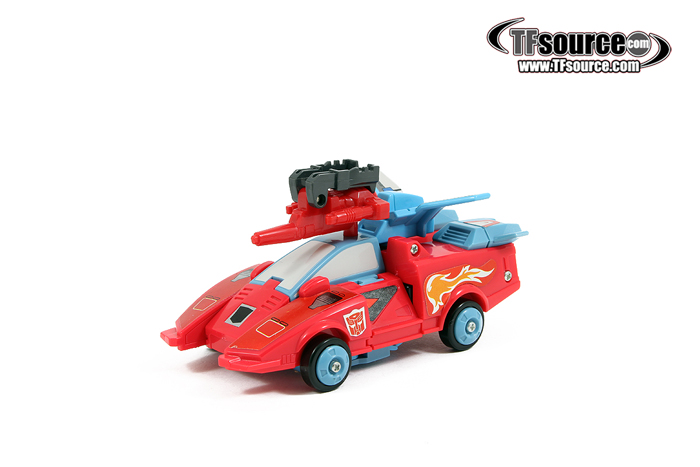 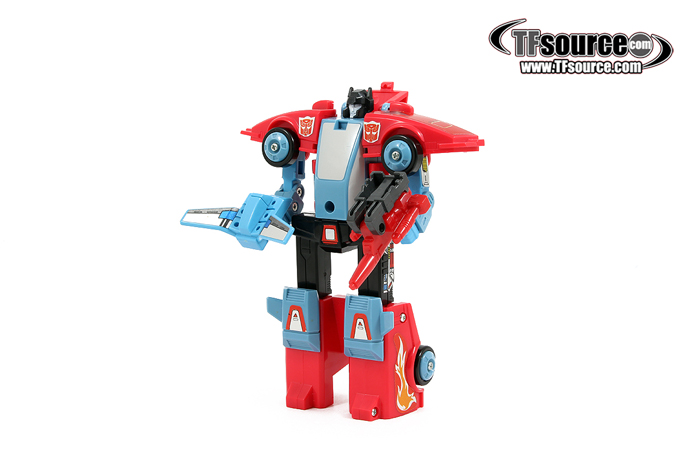 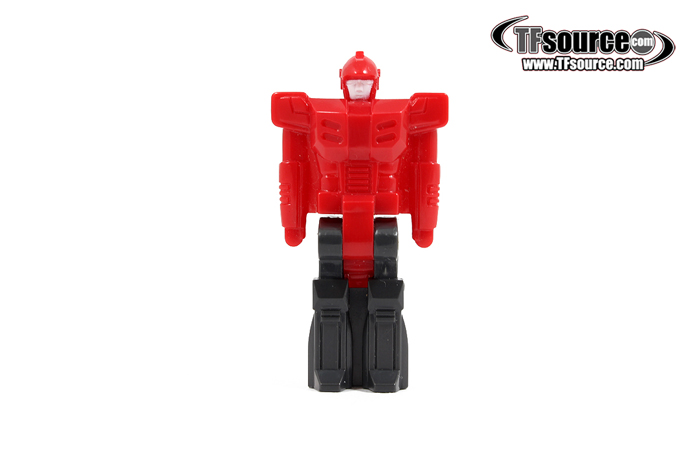 Going straight in at the top, it’s Autobot Targetmaster Pointblank and Peacemaker, two figures with exceptionally good names for a start! You just would not mess with a bot called Peacemaker (“Peaceman” in Japan – not quite as tough). In Japan, Takara called Pointblank “Blanker”. He blanks you out, just consistently badass naming for this guy. Pointblank is not a race car in the super-sleek, low-slung and aerodynamic mould of a Sunstreaker, Sideswipe, Wheeljack or an Overdrive, but more blocky and massive, fitting in with the aesthetic of the time. Red with flashes of flame and light blue, he’s definitely the looker of the three. What’s interesting about Pointblank compared to all the other Targetmasters of 1987 is that he comes with another separate accessory, the wing/shield. True, Scourge has his head-ray, but this seems far more deliberate an accessory. Pointblank has a lovely and deeply classic G1 Autobot head sculpt that is criminally lacking in paint application, same as Sureshot and Crosshairs. The wheels and bonnet halves on his shoulders are beautiful and totally complete his unforgettable look. No clear Decepticon-style canopies/cockpits here, but painted grey windows.

Targetmaster Peacemaker is a very simple 2-part fold-over affair, very close to Cyclonus’s partner Nightstick’s mould. The red chest, white face and black legs do complement Pointblank’s overall colour scheme very well. Now, in addition to the good looks, Pointblank has a fantastic transformation. It could be one of the best across all of the post-movie era with waist rotation, shoulder rotation and extension, leg folding and the hiding of the head and arms in vehicle mode. Clicks and snaps everywhere, it is a complete delight. What Pointblank lacks in separate leg articulation (they are joined) he makes up for in elbows and articulated wrists. These aren’t wrists that have incidental articulation due to a necessary step in the transformation, they were clearly designed to swivel in robot mode. The added shield accessory in robot mode just makes Pointblank feel like such a luxury overall package for this class size of figure. A comprehensive success that, with paint apps on the face and clear windows, would be one of the best G1 Transformers ever. 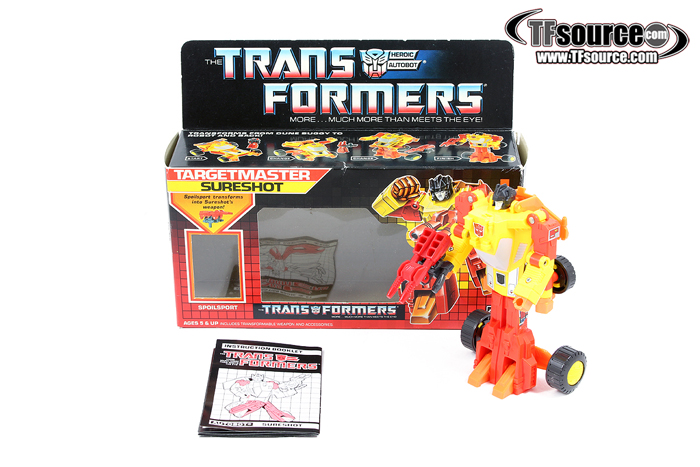 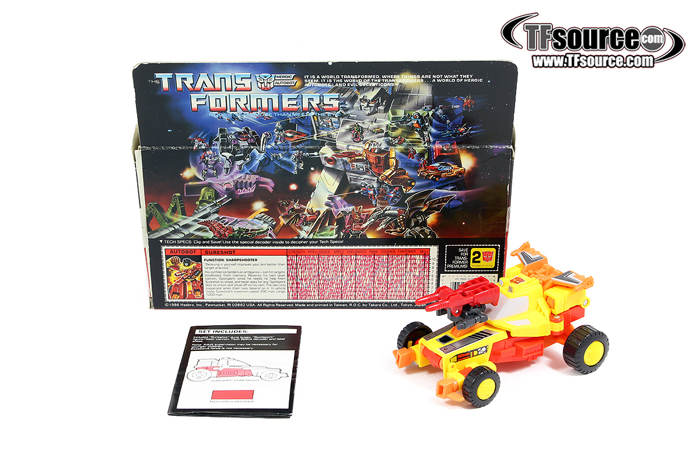 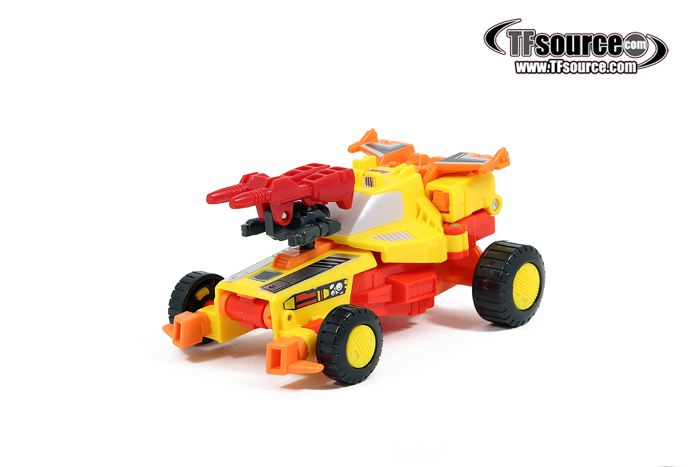 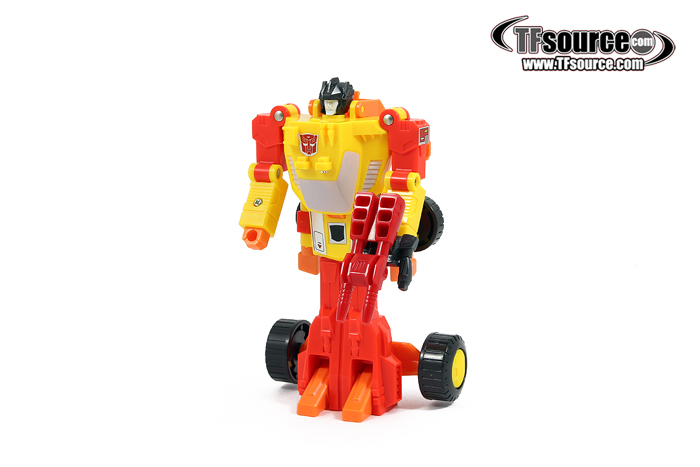 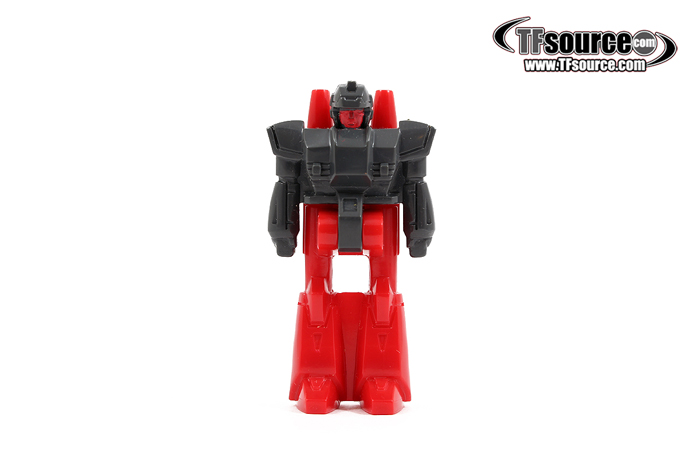 Moving on to Sureshot and his Nebulan partner Spoilsport (“Spoil” in Japan), there is no discernible drop in quality of design or execution. Absolutely eye-popping and unforgettable in appearance, Sureshot is a bright yellow dune buggy throughout with touches of red and orange in enough places to give evoke the feeling of fire. The giant wheels and yellow hubs create quite a presence in vehicle mode, and despite the grey windows and somewhat lack of a nosecone (well, it is a dune buggy after all), it has a very good overall look finished off nicely by the orange rear wing. As with the vent stickers on Pointblank’s hood, the silver stickers bring a lot to the visuals on Sureshot, especially the vents. I love a well-placed prominent rubsign and Sureshot rocks it brilliantly right on the hood as if they were going out of fashion, which of course they were. There is a very distinct ‘toy’ appearance here with Sureshot, even moreso than a majority of the 1986/87 figures compared to the kind of aesthetics you get with early year Transformers, but you’d be a fool to think that makes this too simple and unremarkable a Transformer for the refined tastes of a collector. What I’m beginning to appreciate here is that the Autobot Targetmasters as a whole, while their immediate appearance and overall posability may be less sophisticated than the Deception TM jets, are actually better toys and better Transformers.

Nebulan Targetmaster partner Spoilsport is another simple 2-piece figure with red legs and dark grey upper half, this time a red face is employed to set him apart from the other 2 Nebulans featured in this article. What I like about Spoilsport is that in robot mode, the two barrels of the weapon stick up behind his shoulders giving a slightly unique appearance to him among the Nebulans. No significant colour clash with Sureshot himself ensures a smooth integration when attached in either mode. Transformation on Sureshot is another gem, especially when the joints have aged well. The spring loaded wheel rotations, sliding down of the cockpit, fold-down of the wheelbase and rear axle/feet fold-out are fun and satisfying again featuring clicks and snaps, typical Generation 1 and engaging enough to keep you coming back for more. The tabs to retract and extend the fists are far more durable than on Decepticon Headmaster Mindwipe. The head sculpt is every bit as nice as Pointblank, but again suffers from a complete lack of paint apps, leaving him with what feels like a blank face. Another odd feature is how the moulding on the robot chest/buggy roof means that the main Autobot symbol is off-centre. As everything is yellow on the chest, from a distance it just looks like a mis-applied sticker, but up close you can see mould detailing that forces you to apply the sticker off-centre. Sureshot, who isn’t a million miles away from resembling Hot Rod (Hmm Hot Rod, Sureshot…Hot Shot…), is so nice overall that even the rear wheels sticking out behind the feet so obviously do not detract from his appeal. Proportions are excellent as a package, another huge Autobot success here. 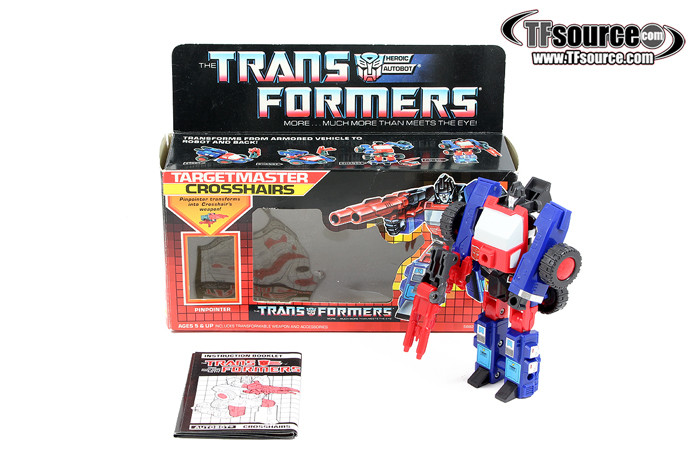 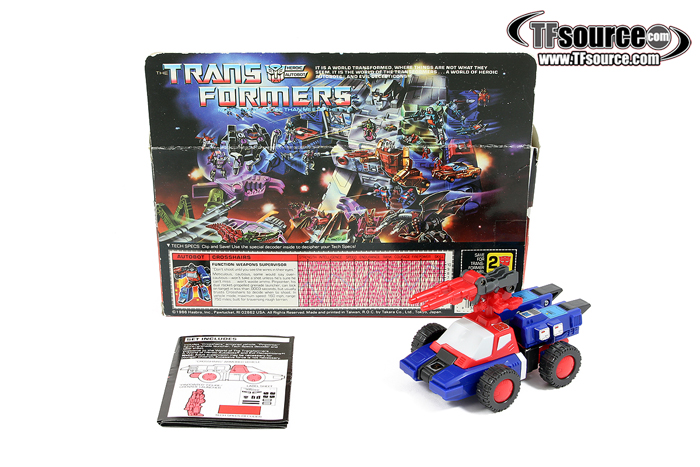 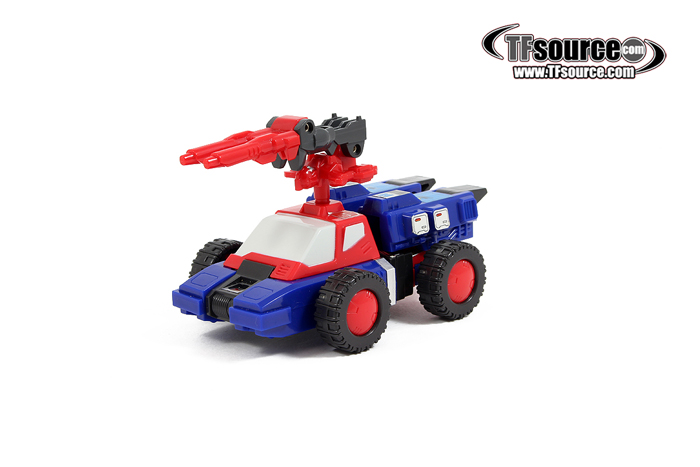 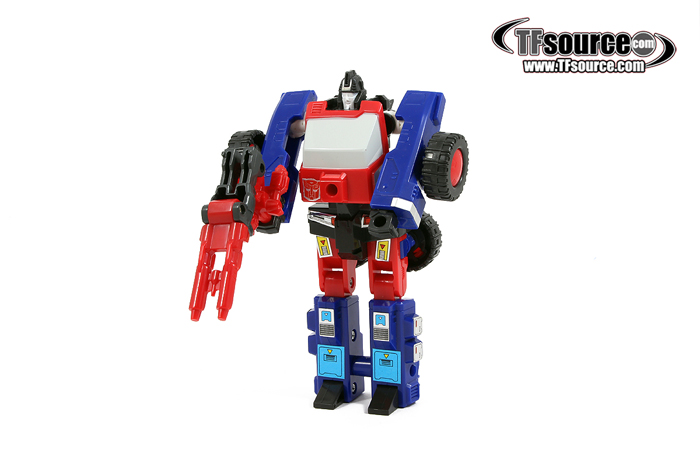 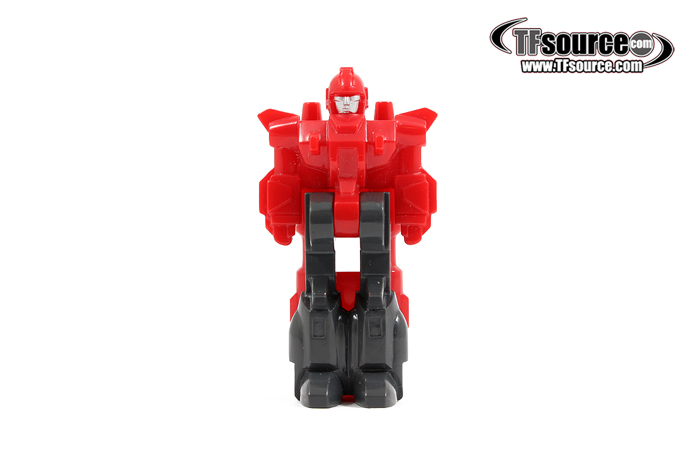 The last of our three non-movie Autobot Targetmasters from 1987 is Crosshairs. Together with Nebulan Targetmaster partner Pinpointer (“Pointech” in Japan), the pair have equally weapons-themed names. Of the three Nebulans, Pinpointer has the coolest build, being a 3-part figure with double fold-over transformation and quite nice upper body bulk, as well as the visible double cannons behind his shoulders. The colours are virtually identical to Peacemaker, making these guys just as confusing (if not more) to tell apart than the Decepticon counterparts. Crosshairs suffers equally from the lack of paint on his face, as well as a slightly awkward-shaped face and helmet, as well as so many stickers in sensitive spots that repeated transformation is bound to cause wear to them, and the overall presentation.

Speaking of that presentation, Crosshairs has a very interesting armoured vehicle alt mode that certainly looks tough, and is probably the most suited to the mounting of a Targetmaster gun. The shoulders are ratcheted at two separate points and while this does limit the poses he can hold, it does give a remarkably satisfying clunk to the shoulders. Like Pointblank and Sureshot, Crosshairs has the hood to cover his robot head during transformation (which is relatively simple compared to the other two), but Crosshairs has a spring-loaded head like Triggerhappy and Slugslinger, whereas the other Autobot TMs have static moulded heads. A prominent vehicle mode rubsign, those awesome large red-hubbed wheels, quality compact and beefy alt mode plus wide robot shoulders help Crosshairs visually, but the grey windows,  off-centre Autobot belly symbol in robot mode count against him. I can’t deny how virtually every step of his transformation has a satisfying ratcheting or clicking feel to it, though. Interesting fact, the concept images for Crosshairs showed him with radar dishes on a rear-facing Targetmaster in vehicle mode, a masked face resembling the cartoon model and a number 7 on the side. 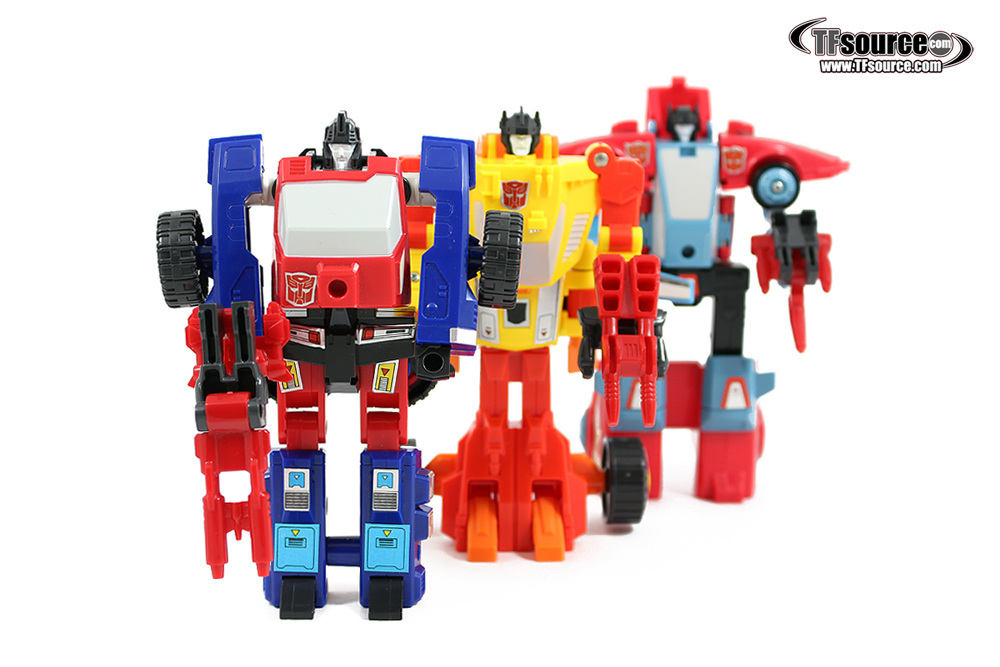 However much each Autobot Targetmaster’s strengths and weaknesses affects their desirability, play value or looks, one cannot deny that one of their greatest assets is just how good they look together. They truly stand out on a shelf and in a display, and they really deserve to be thought of as highly as the Decepticon Targetmasters. They should in fact be held in higher regard, as on the whole they have better transformations, are more durable and look equally cohesive as a team. They also demonstrate the strength in depth of Generation 1 in 1987, in that the inexplicably less talked about set of a particular category within that year can be so much better than such a vast array of G1 and what came after. They may have a more toy-like appearance than the Decepticon TMs and have a lack of paint in the most important of places, but they’re virtually perfect as far as gimmick-led Transformers toys go, because even without the gimmick they’d still be fantastic. 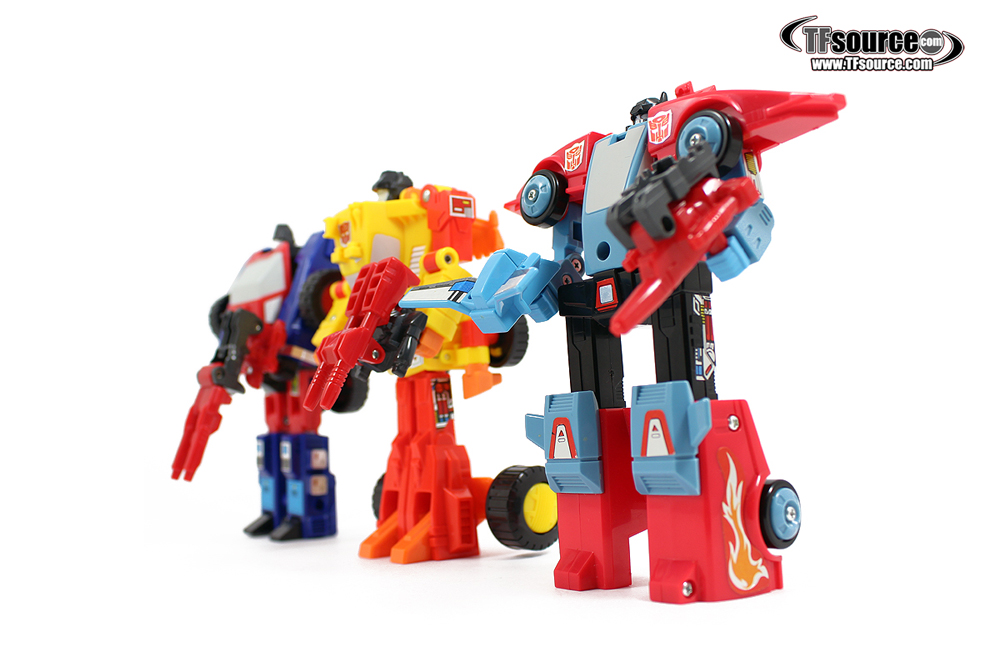 This entry was posted in Source Articles, US Transformers