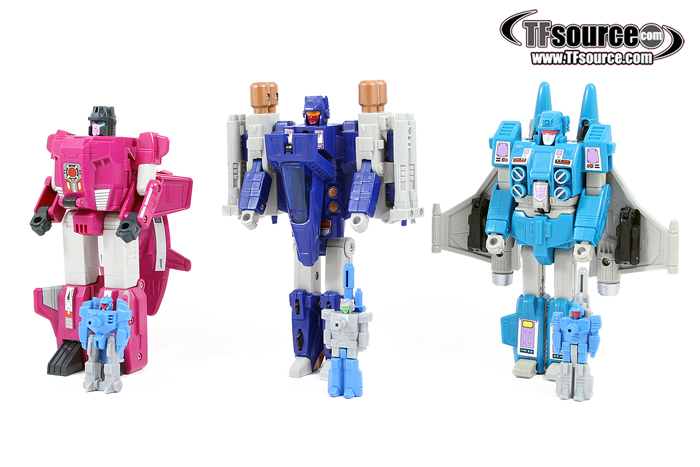 Following on from last week’s look at 1987 Autobot Headmasters, this week we are concentrating on the three non-Movie Decepticon Targetmasters Misfire, Triggerhappy and Slugslinger. These Decepticon jets continue the futuristic post-movie look and the marked move away from realistic Earth-based vehicles for Transformers alternate modes. While the Headmasters were incredibly blocky due to the forced aesthetic of the Headmaster companions, the 1987 Targetmasters were much more well-proportioned figures in robot mode but still featured a number of uniform design choices across the range. As with last week’s Autobot Headmasters, these Targetmaster Decepticons are Transformers-only moulds as Hasbro and Takara were no longer exclusively sticking to pre-Transformers sculpts from Diaclone, Micro Change Series and the like. 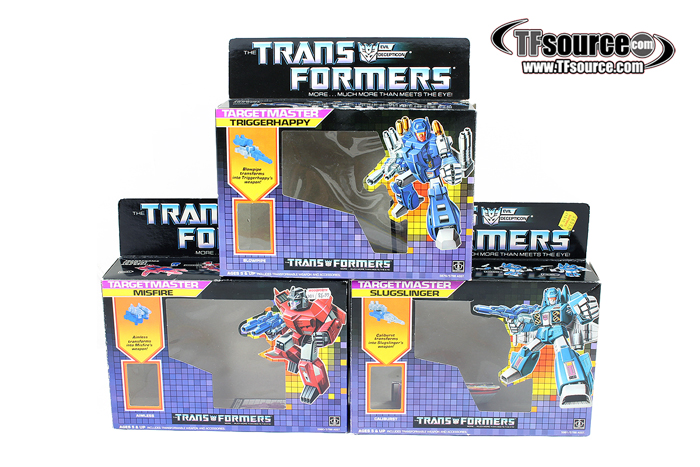 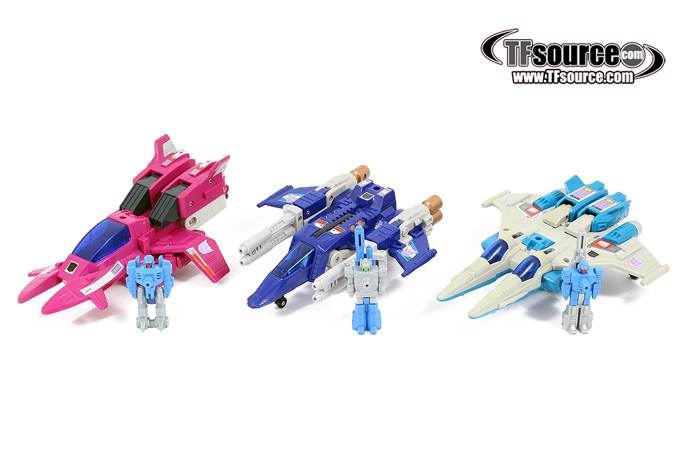 While the Nebulan partners of the Autobot Headmasters were freedom fighters, for these three Decepticons (as well as Scourge, Cyclonus and the Decepticon Headmasters), their partners were actually members of the evil Hive, the Nebulan overlords of planet Nebulos who oppressed the population via their mind-controlled machines. To fight the threat of the freshly binary-bonded Autobots and Headmaster Nebulans, members of the Hive submitted themselves to the same Headmaster process, but also came up with a way of binary-bonding Hive members to Decepticon weapons, and thus the Targetmasters were born. Cyclonus bonded with Nightstick, Scourge with Fracas, Misfire with Aimless, Triggerhappy with Blowpipe and Slugslinger with Caliburst.

Just like the Headmasters packaging, the Targetmaster boxes featured a more digital-style sunburst grid behind the toy artwork and an extra window where the Nebulan partner could be seen in the packaging. As far as Transformers toy collecting was concerned, I always found Targetmasters to be more valuable on the second-hand market, especially the short-packed Targetmaster Scourge, but I think the values of TMs and HMs are converging a little more now. 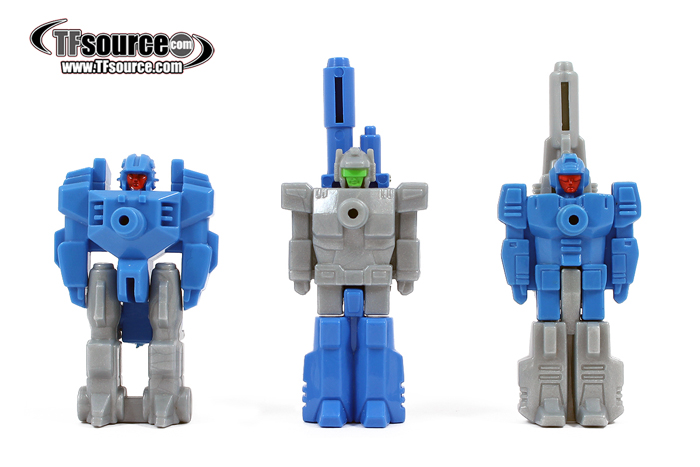 From left to right above we have Aimless (Misfire), Blowpipe (Triggerhappy) and Caliburst (Slugslinger). You’ll notice the naming of both the main Decepticon and the Targetmaster partner relates heavily to weaponry/arms and firepower. There is also a much more uniform colour palette for the Decepticon Targetmasters than, say, their Headmaster counterparts in either faction. While the Autobot Targetmaster partners seem to pivot around a pin, Aimless, Blowpipe and Caliburst are absolutely notorious for having a ridiculous design for their pivot, a plastic rod/axle with what can only be described as corners. This rod clunks through the rotation during transformation (folding the thing in half basically) and massively stresses the plastic casing of the rod. Broken Decepticon Targetmaster partners are one to a dozen, finding mint ones undamaged is very tough and/or expensive. All of these above TM partners had stress marks, and transforming them for the photos gave me stress marks. And yes, it is customary to pretend that the enormous pegs sticking out of their chests are not there. 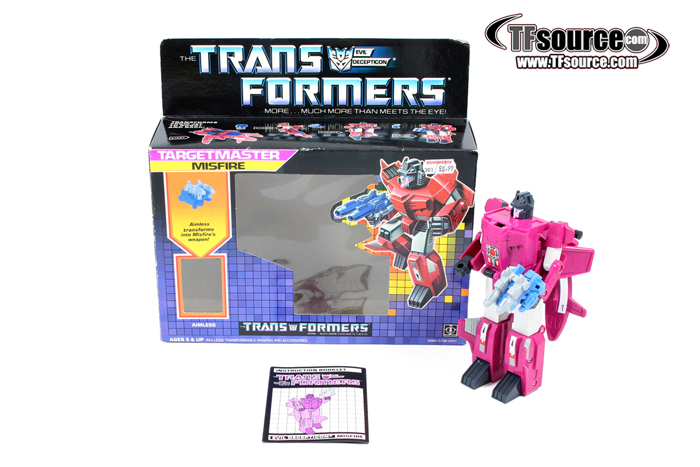 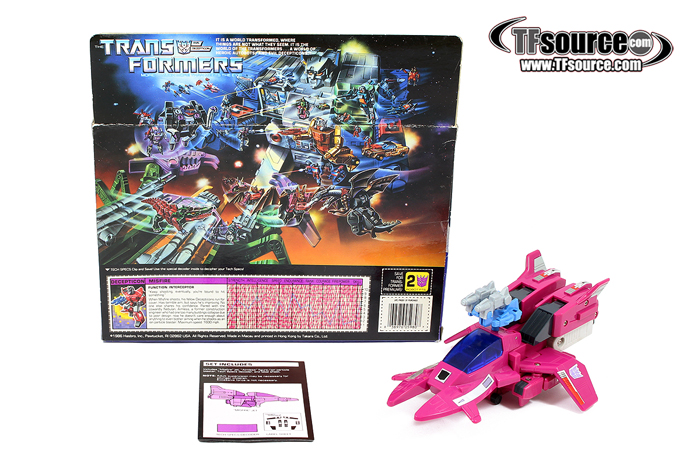 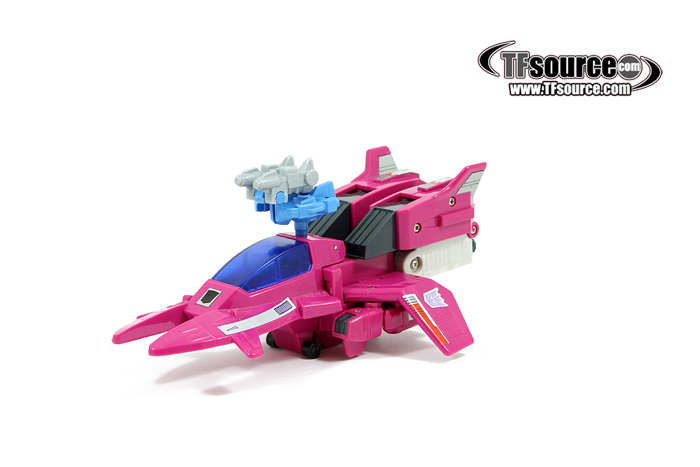 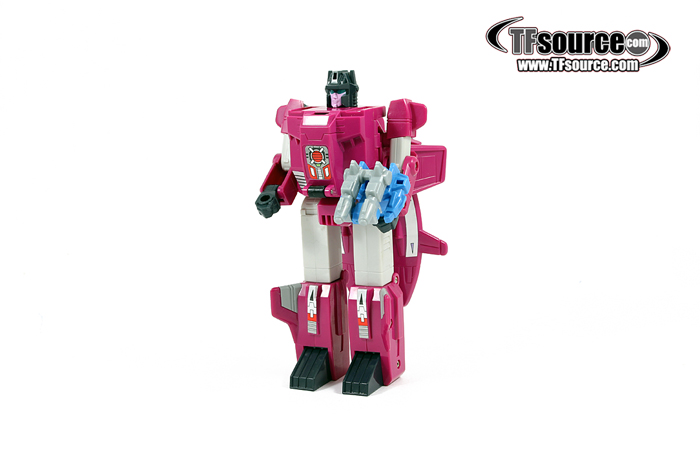 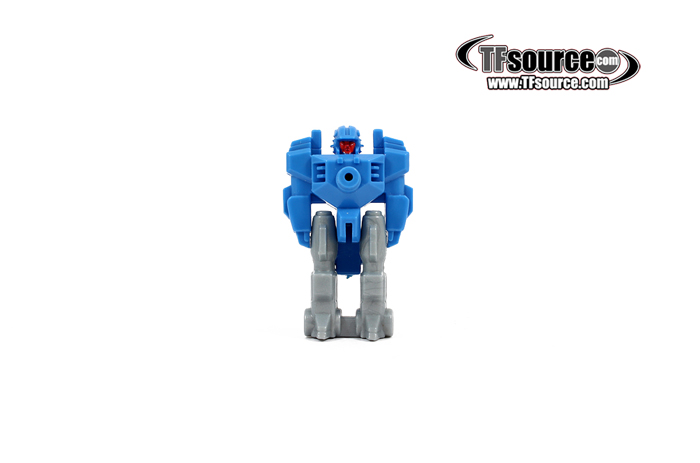 First up is the offensively beautiful pink Misfire, a figure that manages to completely hide all the curves and sleek lines of the jet mode behind a tremendously blocky robot mode. With thighs longer than his lower legs and possibly the largest feet ever seen on a G1 bot (and he had the nerve to tease Flywheels) making his lower body seem slightly disproportionate, it’s amazing how he still sometimes has difficulty standing! The futuristic jet really is gorgeous, and despite the clashing aerodynamically-challenged Targetmaster “Aimless” attached, Misfire works very well in jet mode. Where Misfire really excels is his head sculpt, truly one of the finest of the era. Unlike the Autobot Targetmasters, the Decepticon TMs have painted faces and Misfire’s blue eyes on a pink face stand out. Sticker wear and mis-applied labels can really affect the look of this figure.

Transformation is easy to deduce from the images, like the other 2 Decepticon Targetmasters the legs have to be folded up and around, making up a significant part of the alternate mode. The entire front end of the jet folds back to reveal the robot head, making a hefty backpack. Targetmaster partner Aimless is treacherous to transform for the reasons highlighted above, it’s also the simplest looking of the 3 Nebulan Decepticon partners in this set, being a straightforward 2-part figure that requires folding over. Misfire’s popularity will have risen significantly thanks to his entertaining depiction by James Roberts as part of the Scavengers in IDW’s ongoing More Than Meets The Eye title. 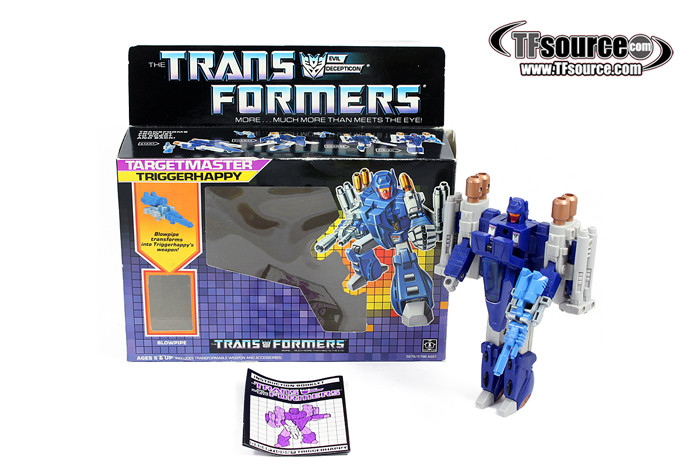 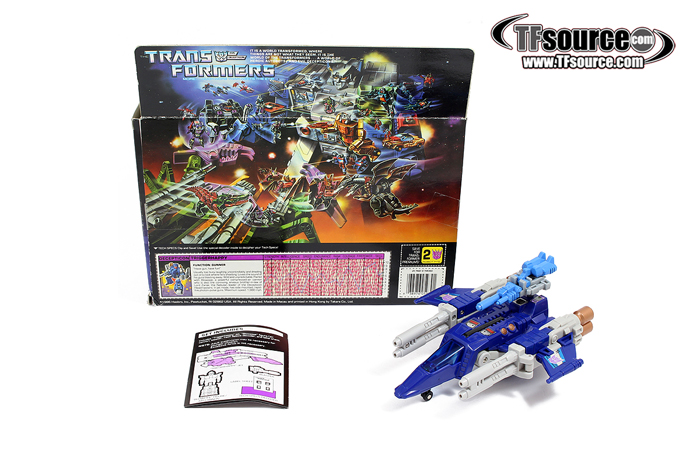 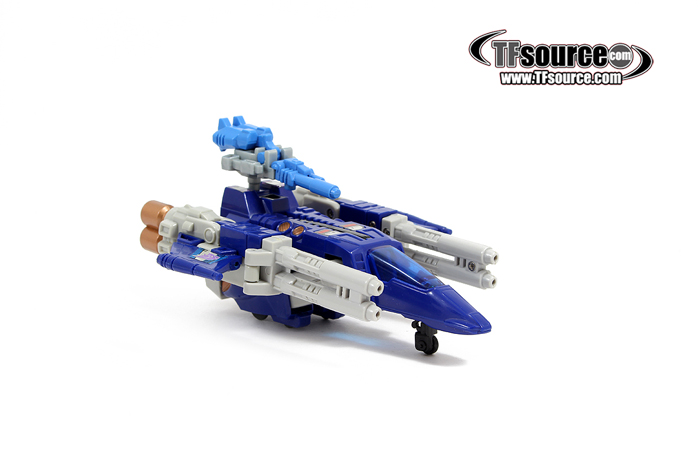 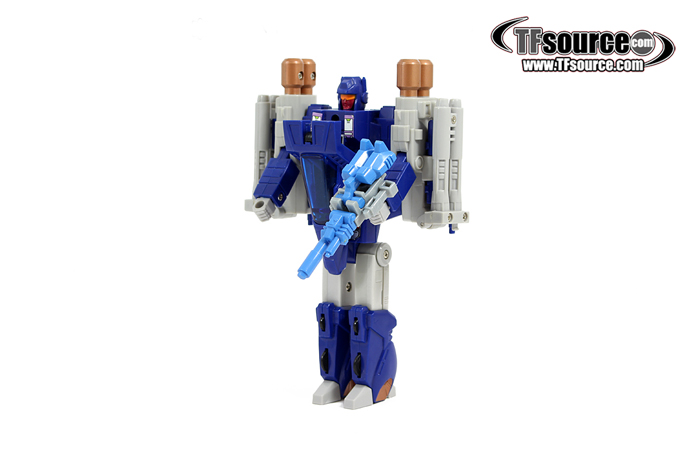 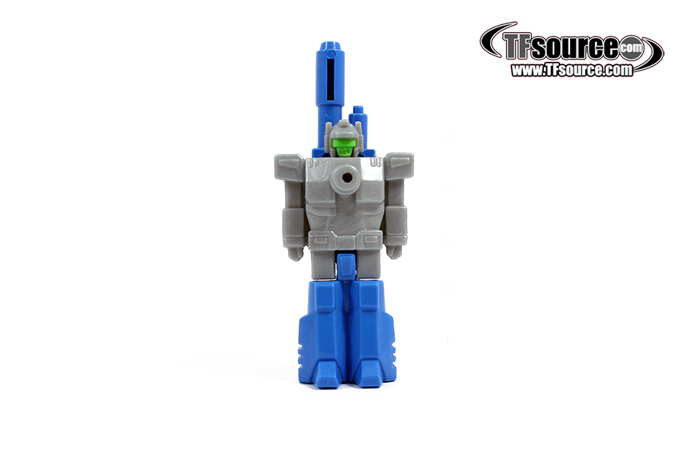 Now we have the wonderful Triggerhappy and “Blowpipe”, another futuristic jet but this time a mix of deep blue and grey. The illusion of subtlety in his appearance is short-lived when you see his copper highlights, red face and orange visor, not to mention Targetmaster partner Blowpipe’s green face. Those double-barreled cannons are a signature look for this toy. Triggerhappy suffers terribly when he is yellowed or damaged, but when mint the figure is peerless as a G1 representative. The leg and elbow ratchets are superb, he has fold-out hands like Misfire and Slugslinger, a translucent blue canopy like the other two Targetmaster jets and his Targetmaster Nebulan is similarly grey and blue overall, like “Aimless” and “Caliburst”. Unlike the other two, we are not denied Triggerhappy’s blue canopy in robot mode as it sits prodly on display as his chest.

Trouble spots on Triggerhappy include loose double-barreled cannons that won’t stay up in robot mode, and the little tabs on them breaking off. Yellowing of the grey parts is a major issue, the spring on the pop-up head can be an irritation and of course broken Blowpipes litter eBay weekly. Speaking of Blowpipe, this is a 3-part Targetmaster with a parts-forming barrel that detaches and re-attaches behind Blowpipe in robot mode. The variety is welcome when there is generally quite a lot of uniformity across the three Decepticon TM jets. As mentioned before, when Triggerhappy is in good, tight and undamaged condition, the toy is a complete joy to transform and display. Interestingly, he shows disparity between his animation model and toy, on-screen he had eyes not a visor, and a mouth-plate instead of the toy’s humanoid face. 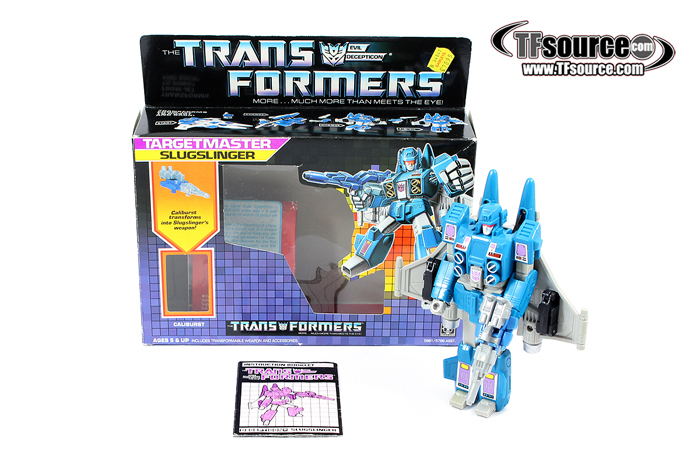 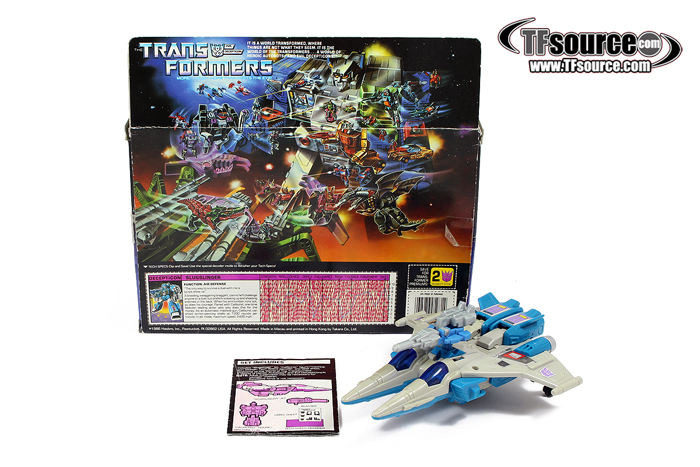 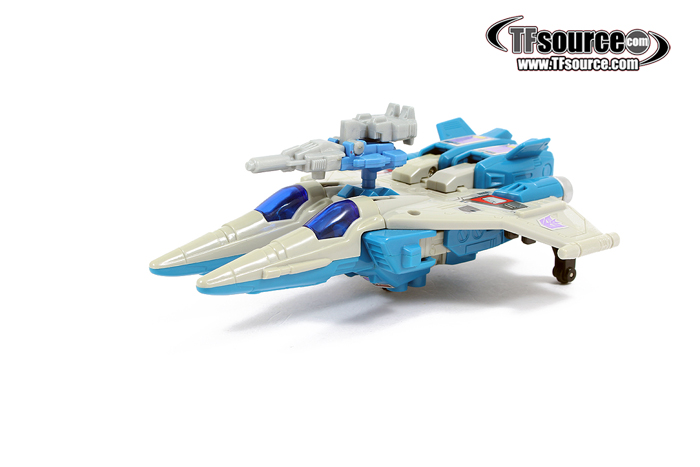 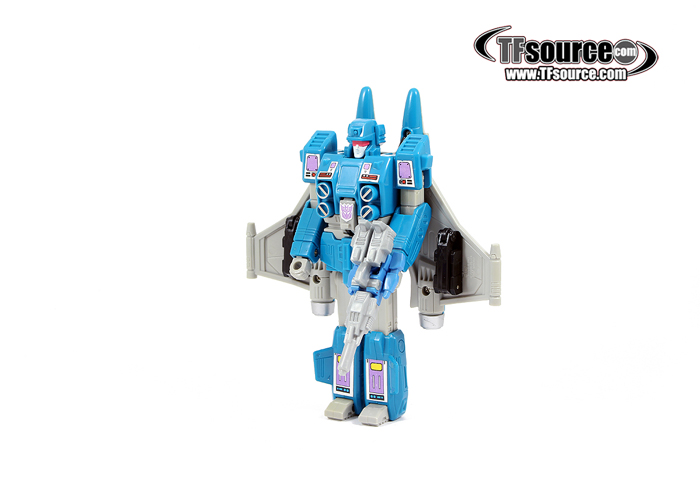 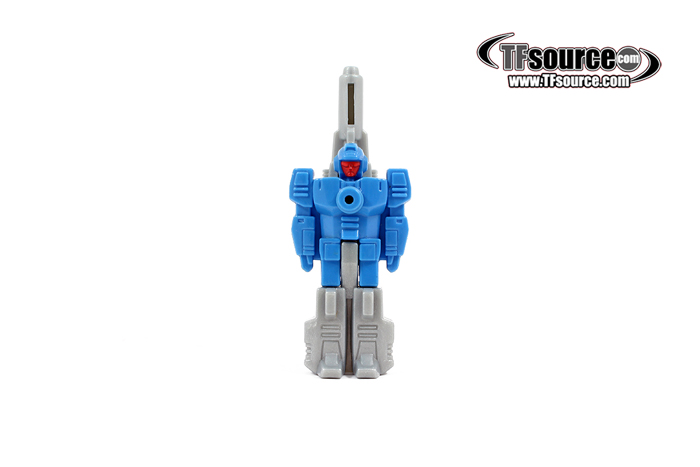 Finally, the glorious Slugslinger, he of unforgettable name, unmistakable twin-cockpit jet mode and plane on his back. Slugslinger has one of the best head sculpts in all of Generation 1, even nicer than Misfire. That is one of the great strengths of the Decepticon Targetmasters. He has a lovely light blue and grey motif, as does his Targetmaster Nebulan partner “Caliburst”. Slugslinger suffers more than any of the others with yellowing, even my boxed specimen above obviously exhibiting discolouration on the cockpits and one robot foot. The silver paint on the circular moulded sections on either side of his belly is hardly all there to begin with, let alone after years of use. The legs can also be a little tricky to unclip when folding them off the back of the jet and down for robot mode. Like Triggerhappy, Slugslinger is covered in comforting ratchets.

Caliburst is susceptible to the same instant breakage at the pivot as the other Decepticon TM partners. Caliburst is also a 3-part TM like Blowpipe. In fact, Slugslinger and Triggerhappy have a number of common features like the spring-loaded pop-up robot head, the 3-part Nebulan, similar arms/elbows/hands and small flip out feet with in-built heels, although Sluggy’s don’t need separate transformation like Trigger’s. Slugslinger also has the fold-down landing gear as well as rear wheels mounted on his wings. I’m not entirely sure I’m a fan of those yet. The blue canopy is there too, times two! Slugslinger’s on-screen counterpart had a far darker blue appearance and separate eyes, but I prefer the toy appearance much more, as his visor really makes that head sculpt. A truly outstanding looking figure, in my opinion. 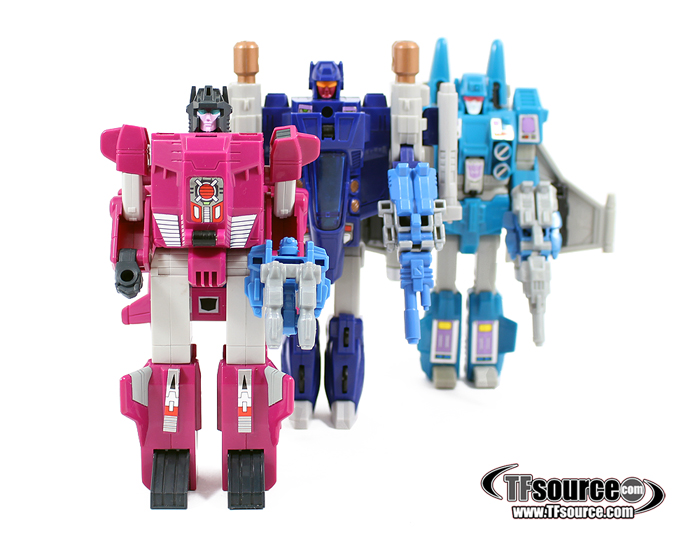 I feel as though the non-movie Decepticon Targetmasters were something slightly removed from all the other Transformers of the same year, and even across the entire G1 range. Despite being realtively uniform in their transformation, colours and aesthetic, their futurstic forms set them apart from early G1, their Targetmaster partners allow them entry to a small club of TFs, their highly humanoid face sculpts, excellent proportions and sleek alternate modes put them in a distinctly separate group from most other Transformers, especially the Headmasters. It is both an advantage and a disadvantage that their Targetmaster companions are not as integral to the look of the jet or robot mode as the Headmasters. Sure, Cyclonus and Scourge are a part of this crew and were cross-sold as part of the five Decepticon Targetmasters, but something about Misfire, Triggerhappy and Slugslinger elevates them above gimmick-specific toys, they were after all not originally conceived to be Targetmasters, and they look sublime together. I only wish that Hasbro and Takara had found a way to bring the fourth (sixth, really) Decepticon Targetmaster jet to life beyond the concept drawings showing another futuristic fighter in the same mould as the above three. Targetmaster Decepticons, the highlight of Transformers 1987. 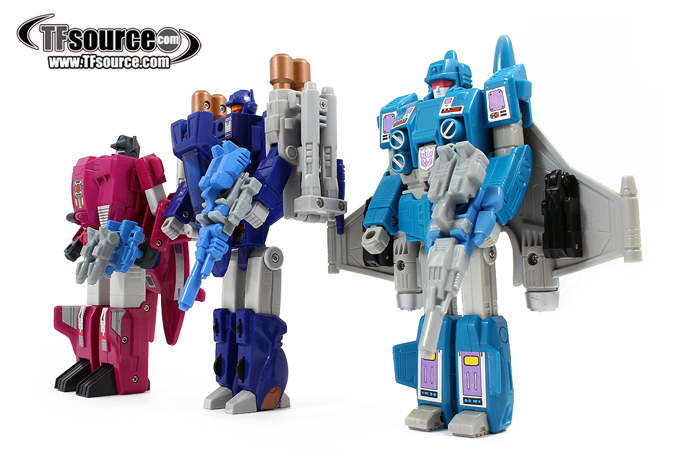 You can get your own vintage G1 Transformers here at TFSource