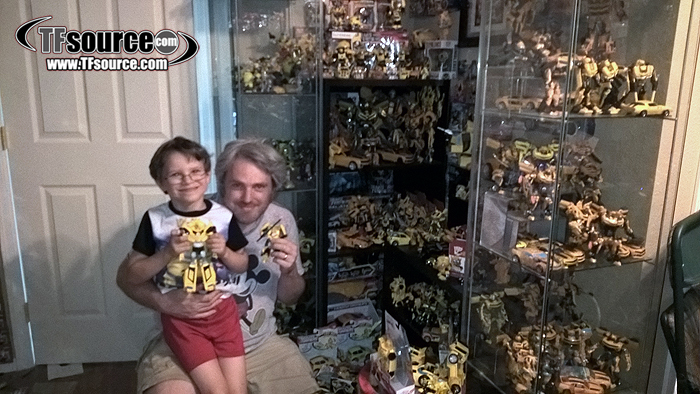 There are those that specialise in Transformers of a particular era, and others that specialise in figures from particular geographic regions. Some collectors don’t specialise at all, and then you have the ones who specialise primarily in a single character and collect as many versions of the bot as possible. Ben Harpold is one such collector, or at least has become one. His dedication to Bumblebee and all of its incarnations, not to mention merchandise, is staggering. Maybe even more surprising is that once you remove the Bumblebees, what’s left is equally incredible and a stunning collection by itself. Just as there’s more to Ben’s collection than Bumblebee, there’s more to his enjoyment of the hobby than just toys also. Get ready to witness something quite extraordinary… 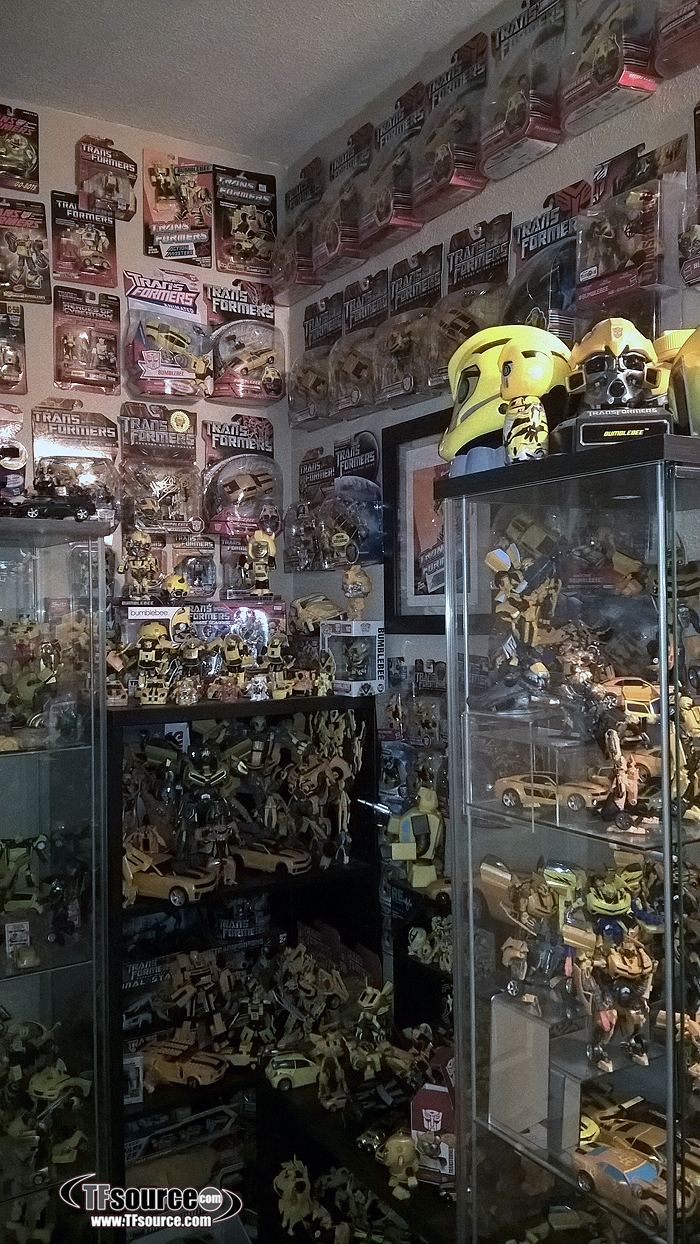 Lots and lots of yellow

My name is Ben and I collect Transformers. Beyond that I’m a stay at home dad, which is the greatest job I can possibly imagine. I’m also a husband, musician, filmmaker, Lego builder, teacher. I go by the handle Hollywood Hoist. The handle confuses people sometimes as I have a huge Bumblebee collection, but I came up with the name prior to focusing on Bumblebee.   Since I have a huge love of movies I thought the play on the G1 episode Hoist Goes Hollywood was appropriate.

I’ve attended every BotCon from 2007-2014. During those BotCons I’ve submitted films for each of their film fests and have placed every year except one. In 2014 I submitted a film that was inspired by an idea of a fellow collector named Jesse.   That film which won first that year allowed me to bring together my love of Transformers, music and filmmaking into one project.

Recently I’ve been one of the show runners of CybFest NW, a Transformers fan convention based in the Pacific Northwest. Our second show is coming up August 22nd. The show is the sister show to long time running convention Cybcon. Throughout the years of going to conventions I have made a lot of friends. As a result of taking on a convention some of those friendships have expanded into business relationships and really I couldn’t have better partners in this endeavor. 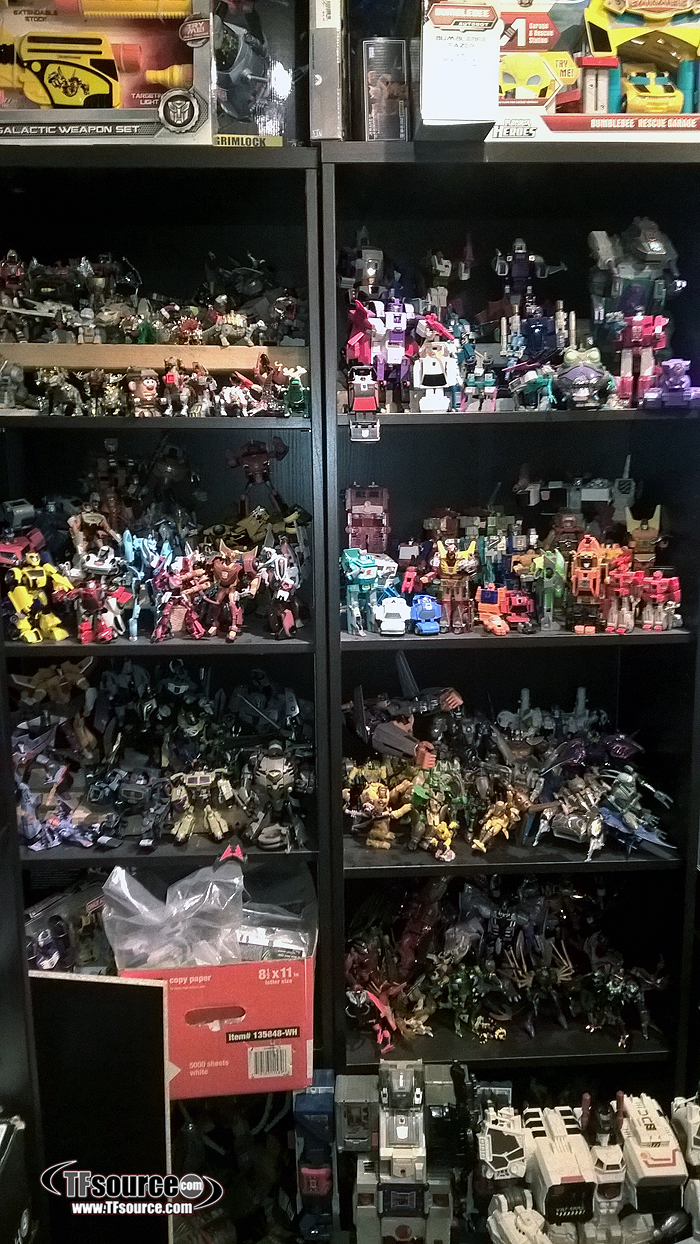 Ben does collect other characters too 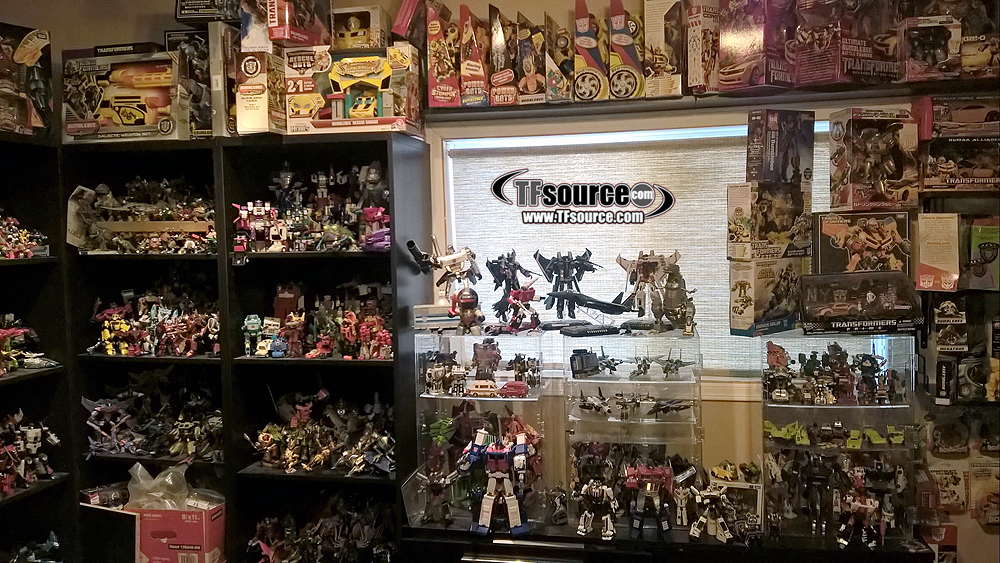 Even without Bee it’s an insane collection

Collecting has changed a lot over the years. Hasbro and Takara pay a lot more attention to the adult collectors.   Transformers are back in the mainstream of pop culture, thanks to the movies. We have so many different styles of Transformers thanks to the variety of shows and movies, each one bringing in new fans.  No matter what style you like, there is something out there to satisfy those collector urges. The number of online stores has increased so much as well, allowing for collectors to access more product, as a result we now truly see what is rare and what is just not easily obtained. 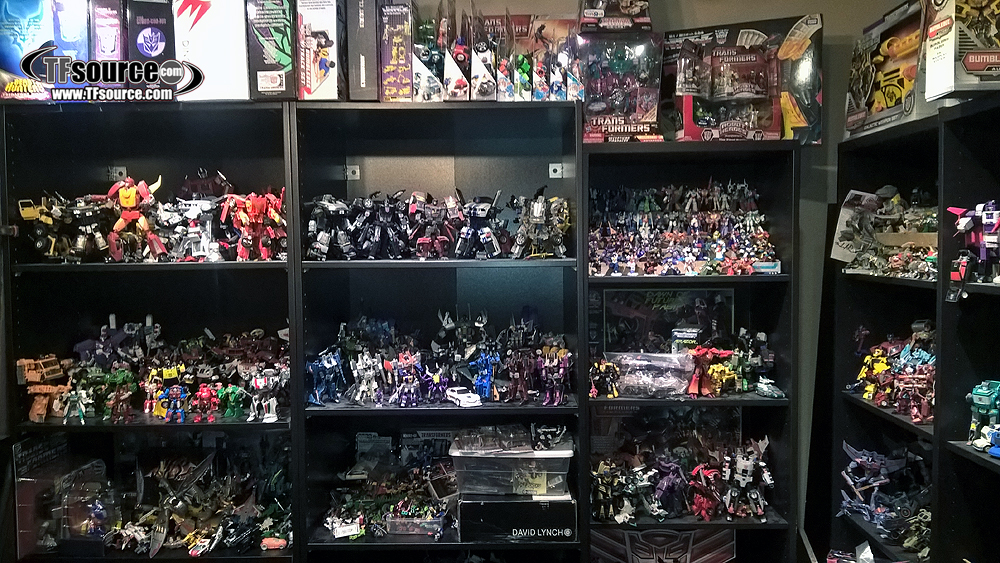 Not so much yellow here! 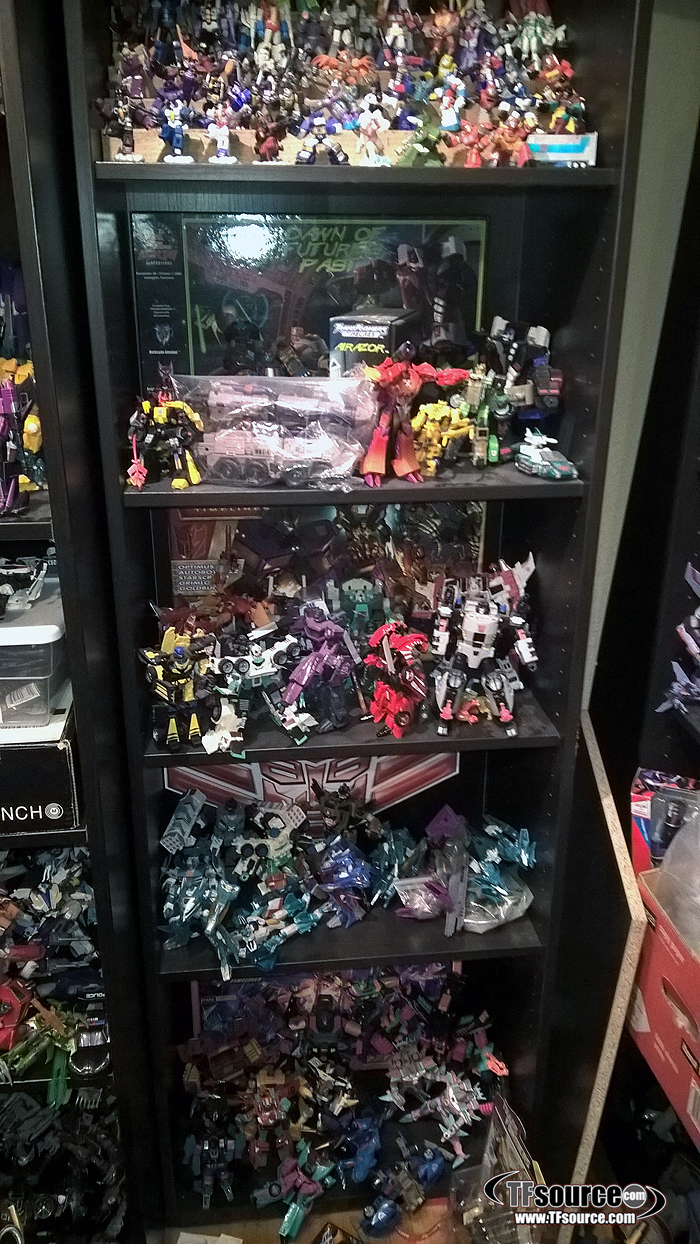 Plenty of diversity beyond the Bees

I hope things continue in the direction that they’ve been going.   We have products for each age and play pattern between Rescue Bots, RiD, Generations and Masterpiece. I would love to see all the 84-85 characters in official Masterpiece form.  I love that Transformers continue to have the puzzle play, but also Hasbro is bringing back the quick transformations that I grew up with and kids use to tell an action packed story. 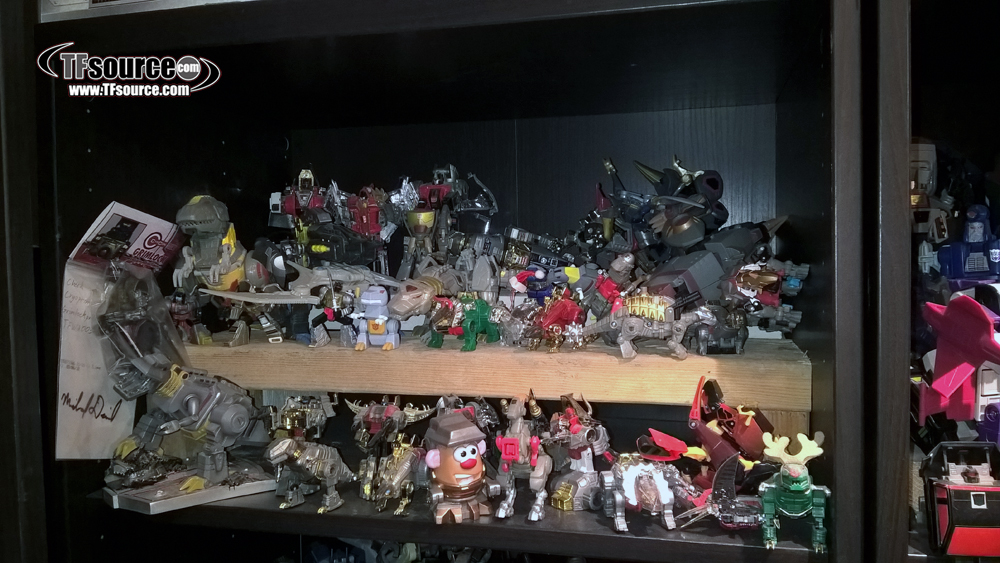 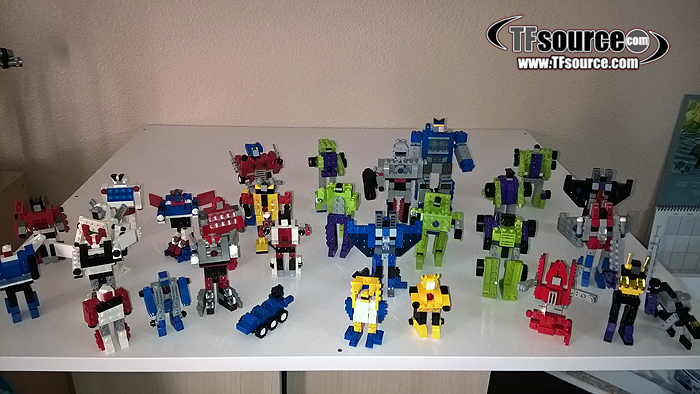 Though not a single success, I would say the collecting of the deluxe movie Bumblebees, I have pretty much each release in robot and vehicle as well as most in package. It’s been getting harder since space has become more rare in my room. I know I’ve missed out on some of the variants from Japan, but I think I’m just going to have to be okay with that. 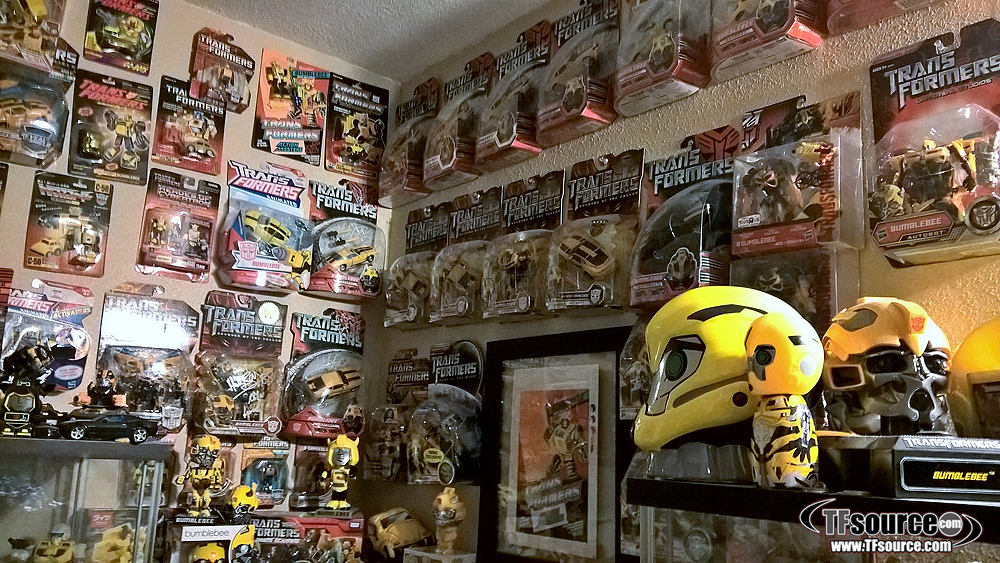 The Bees are back 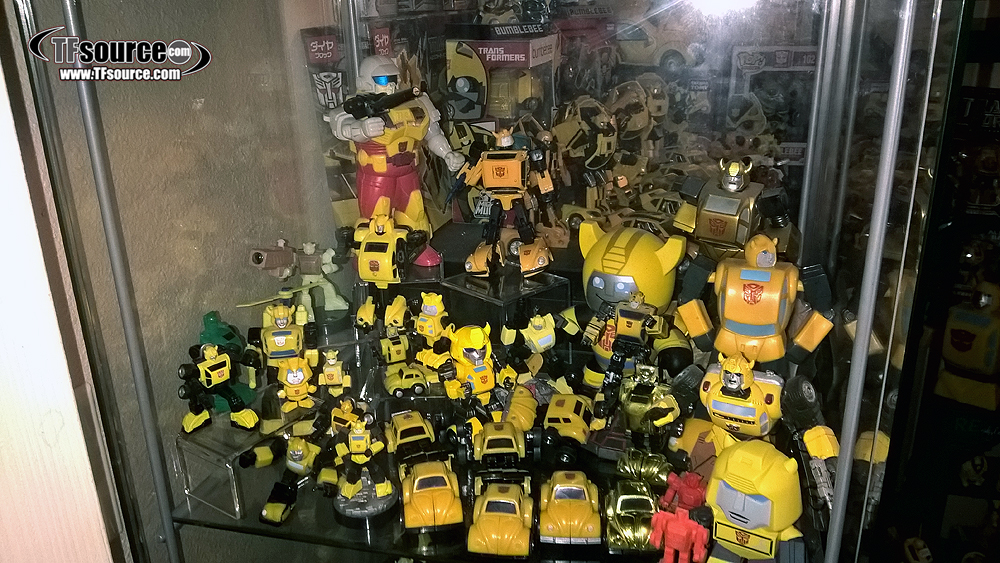 That’s an easy one a friend gave me a Cybcon 2004 Bumblebee as a thank you for helping him out at his dealer table at a later Cybcon. I had one of my own, but due to a computer crash, I sold it so I could rebuild my machine. This was before I started focusing on my Bumblebee collection, so it was a huge regret once I started collecting Bumblebee, since it’s so rare. Despite the value of that figure, my friend chose to give it to me and it represents the generosity and kindness that is present in our community. 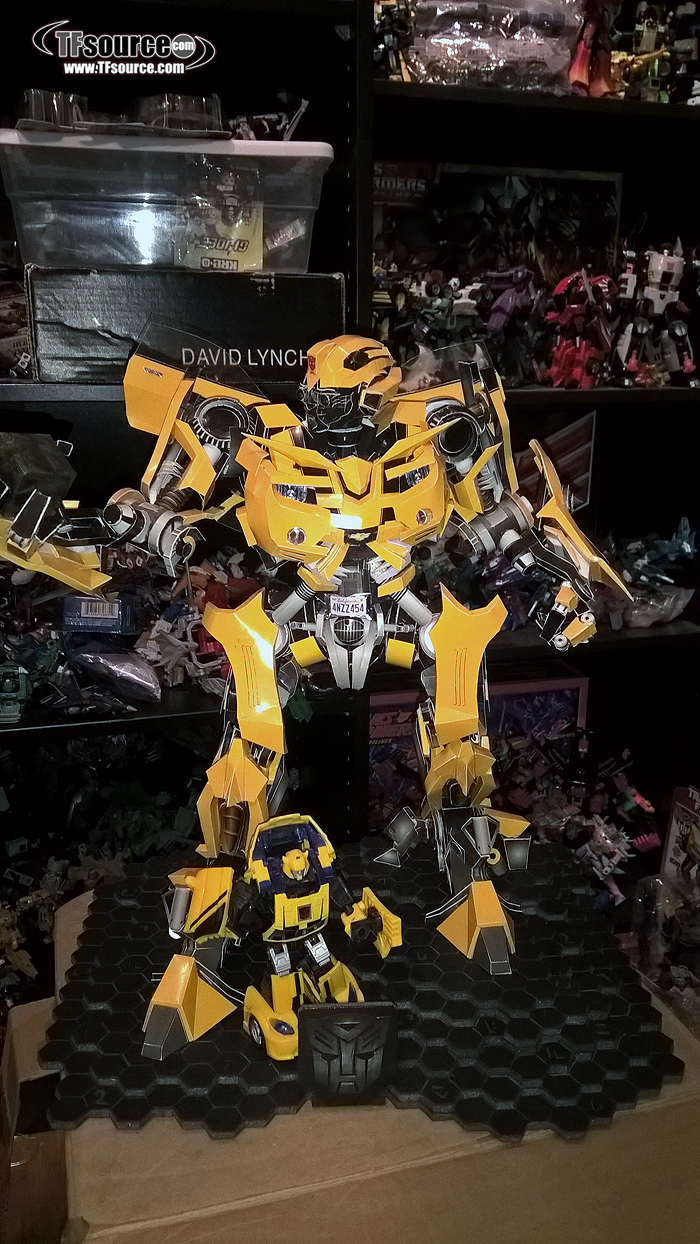 That’s a tough question.   If it was a regular released figure it would be MP Bumblebee.   A close second would be a paper made movie Bumblebee with over a thousand different pieces that a dear friend of mine made for me as a thank you for picking up some BotCon exclusives, which he paid for. The time that went into its creation is incalculable. I’m constantly floored by the generosity of my fellow collectors. 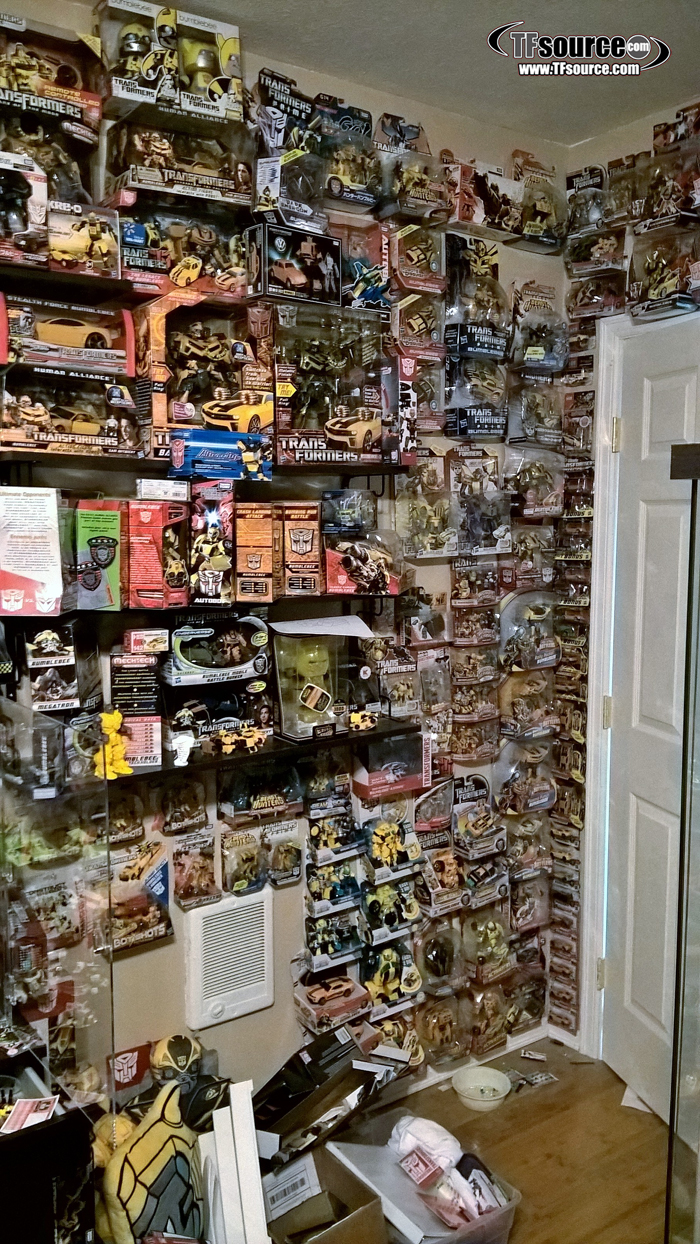 The one figure he needs? Bumblebee.

I would love to find a 84 Takara sealed Bumblebee in the small box, that is my holy grail.   I have never seen one in person, much less had the opportunity to purchase one. Each Botcon I ask around at any dealer who has any G1 from Japan with the hopes they will have one or know where one can be obtained. 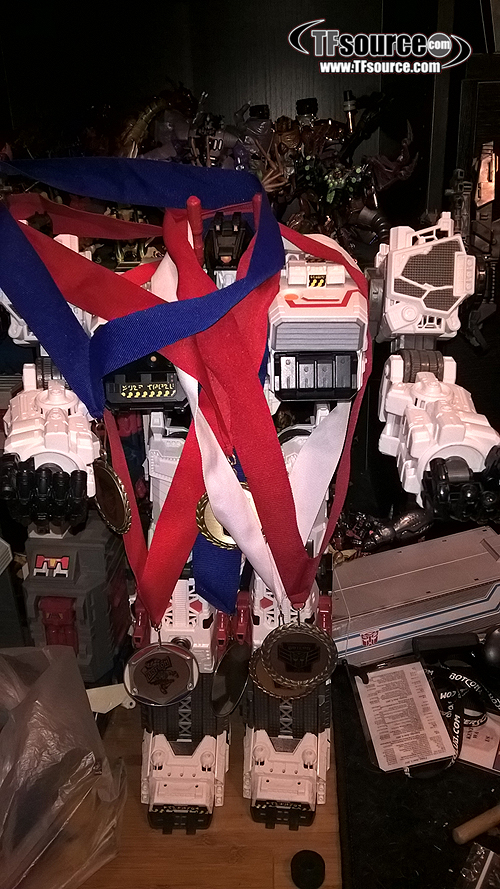 Set your rules and stick to them. Don’t try to collect everything and make sure what you have is what you truly enjoy.  Try to get more out of collecting than the toys. There are so many creative outlets in this fandom between writing, customizing, drawing and costuming. Also there are so many friendships that can be made through this fandom and at the end of the day even if you lose all your toys, the friendships will remain. 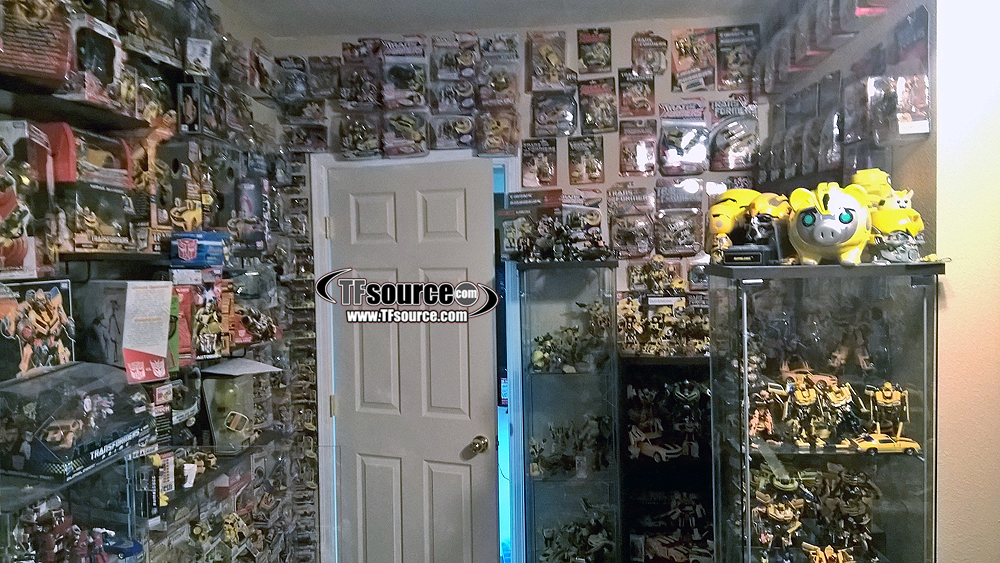 Exit through the gift shop

Many kind and gracious thanks to Ben Harpold for words and images.