Flight Of The Bumblebee 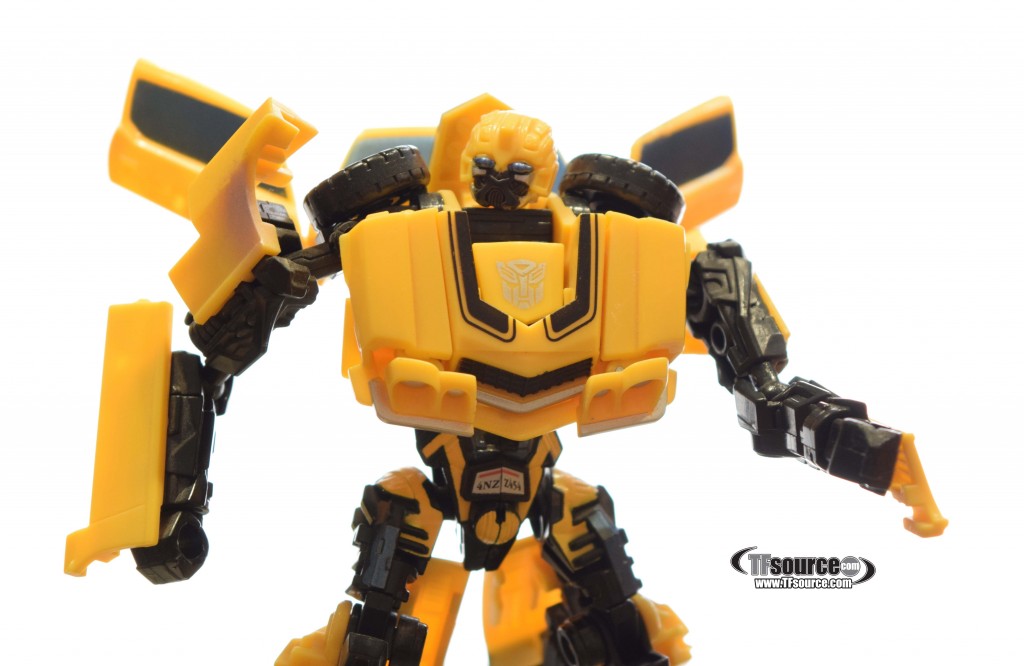 I could describe this character in so many ways. He has grown to become one of my absolute favorite characters, even influencing me to dedicate a corner of my collection just to his toy. For me, the appeal is easily there. To others, he can only be described as quite possibly the most hated Transformer in our fandom.

What’s the deal with Bumblebee? That’s the question I enjoy exploring. I started collecting Bumblebee toys in and around 2011. The Dark Of The Moon toy line was winding down and I had found myself completely fascinated with how many Bumblebee toys Hasbro would continue to push out. What I also found curious was how so many fans despised Bumblebee to the point of internet fan rage. I kind of just fell into collecting the character and really enjoyed it. 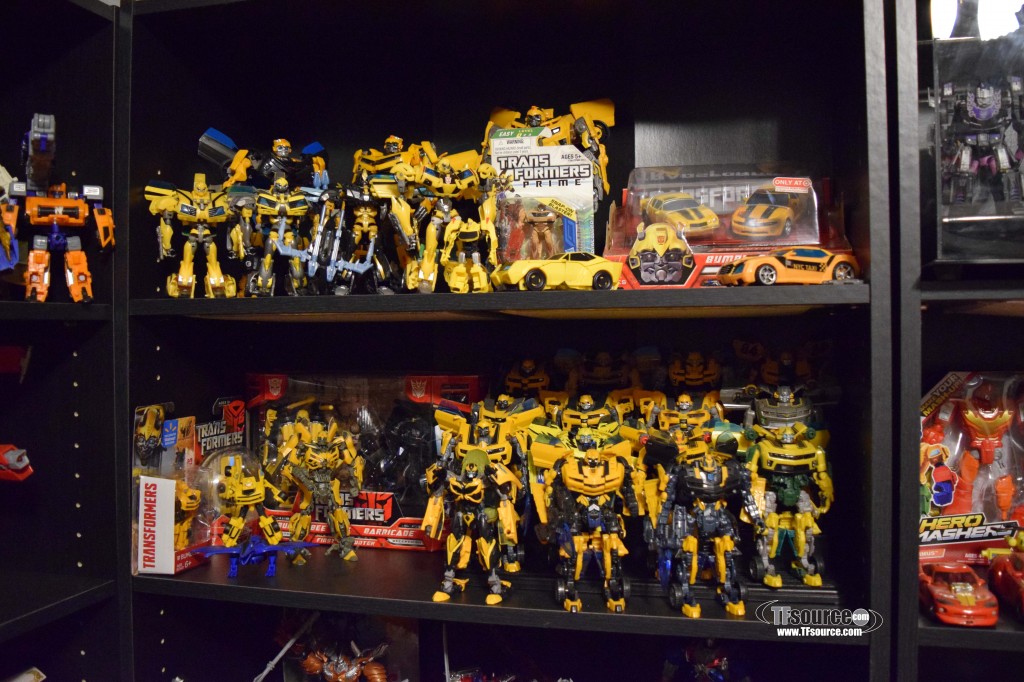 Like me, there’s a few collectors out there that just adore Bumblebee. I admit there may be more than “a few,” but it seems they are hard to come by. What’s the appeal of this character? Why is he a favorite to some, hated by others? I turned to collectors that I knew had a vested interest in Bumblebee to shed some positive light on the character that I feel catches too much rage: Jared AKA Secretcode and Ben AKA Hollywood Hoist. 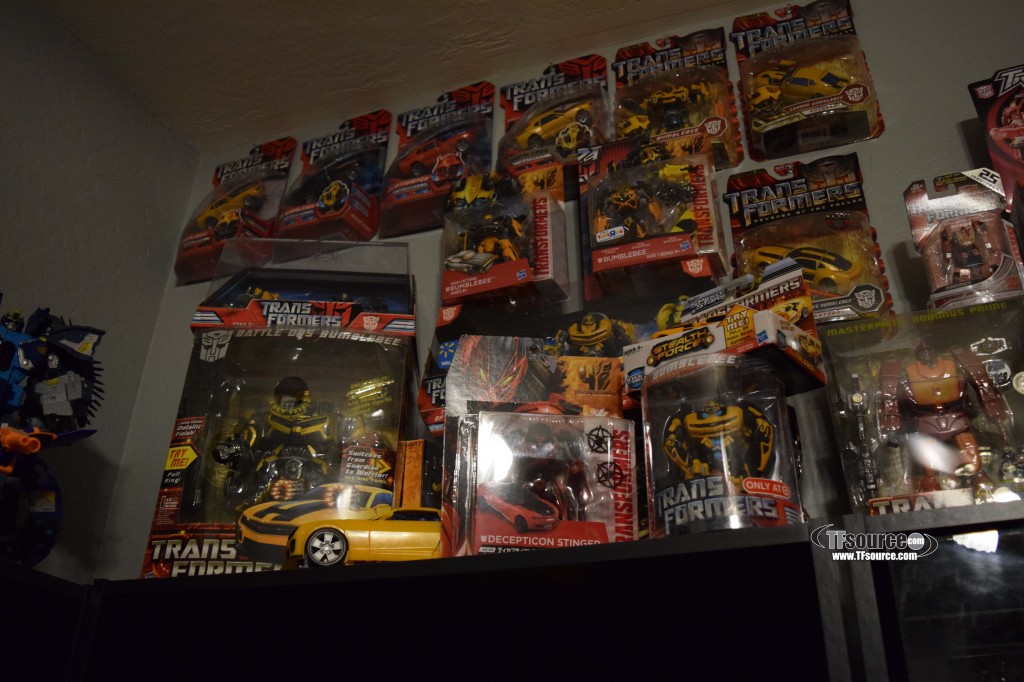 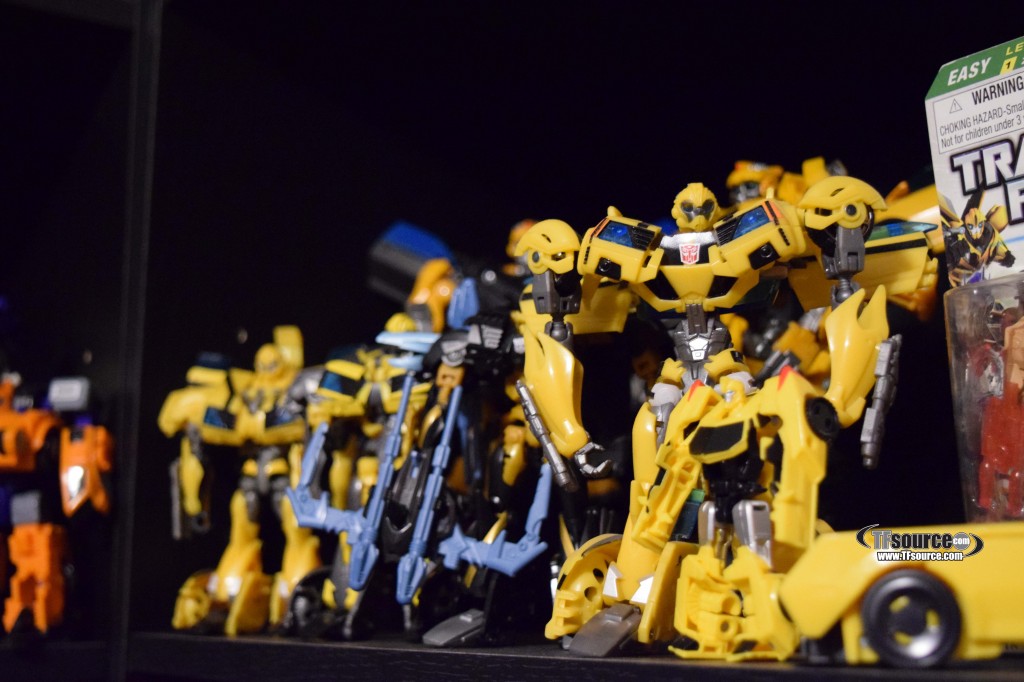 Myself, I own well over 50 Bumblebee toys, every Hasbro released live action movie deluxe, and I don’t plan on slowing down. That feels like a high number to me, so the obvious first question for my fellow Bumblebee enthusiasts:

1 – How many Bumblebee figures and / or pieces of merchandise do you currently have?

Secretcode – 42, with a few more on the way at this time and a bunch more on the list of stuff I still want to pick up. 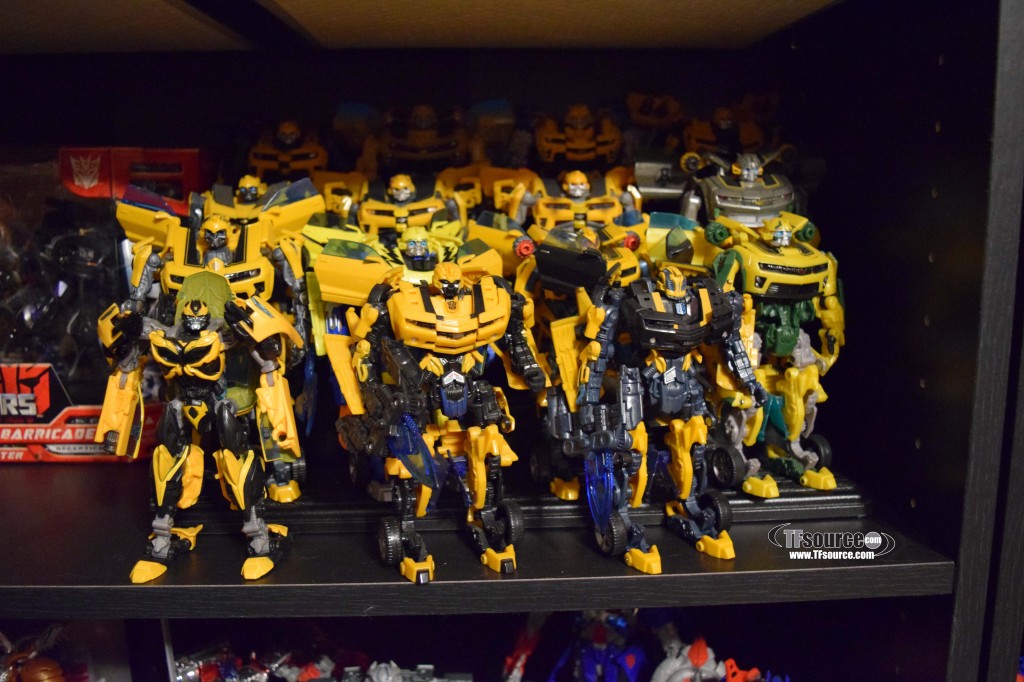 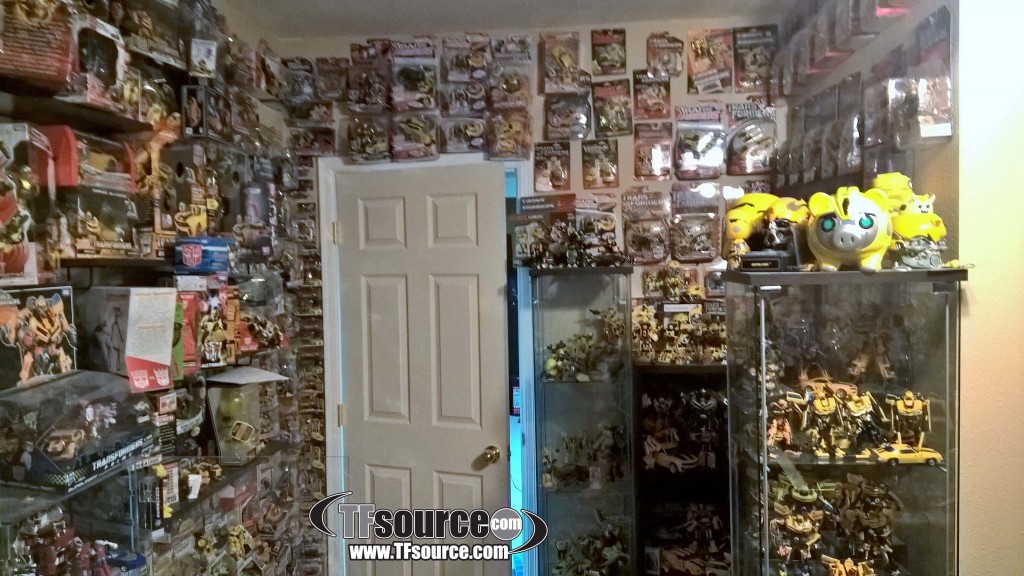 Ben (Hollywood Hoist) does not mess around. 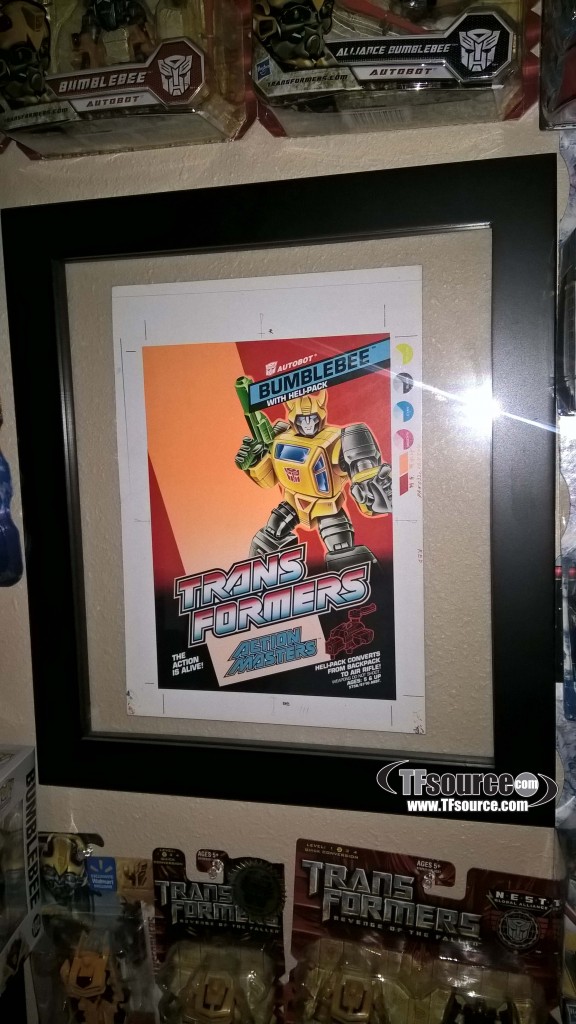 Ben’s Action Master card backing. What doesn’t he have?

Wow! So I’m not alone in owning that many Bumblebees (great news). With that many figures in our “hives,” it’s hard to pick a favorite. I’ve always really enjoyed the first live action deluxe toy, before the days of repaint after repaint: the Automorph 1976 Chevrolet Camaro. 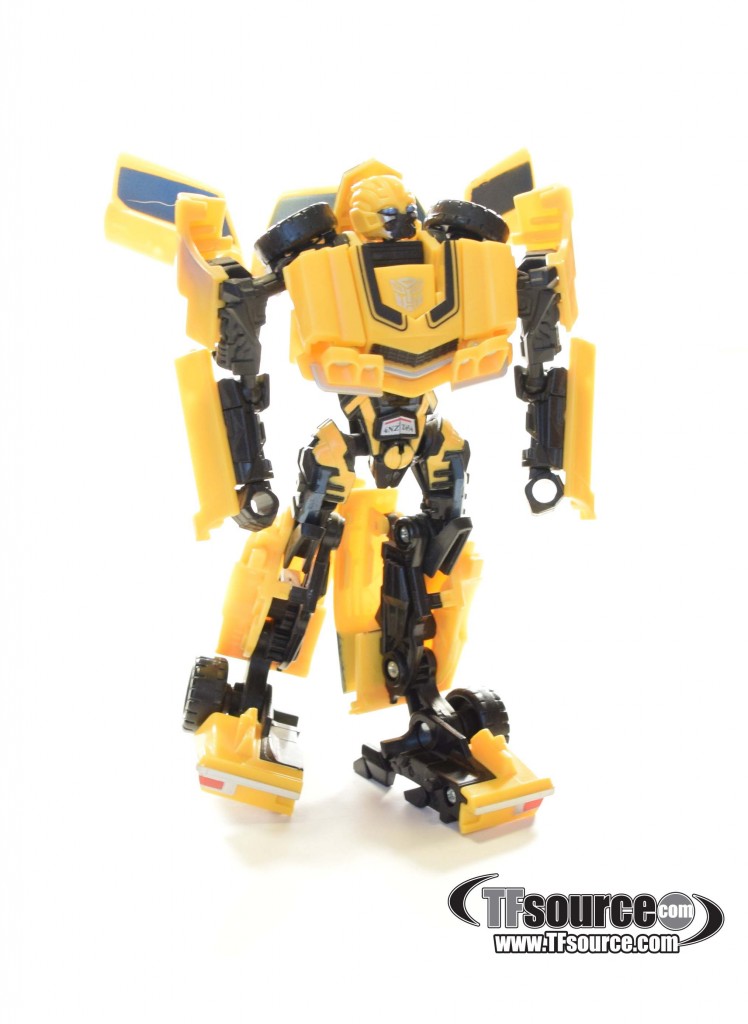 2 – What Bumblebee toy is your favorite? Why?

Secretcode – Dark of the Moon Deluxe Bumblebee still remains the perfect balance of accuracy and complexity for me, even four years after the toy released.

Hollywood Hoist – I have a few Bumblebees that stand out. Classics Bumblebee is just a wonderful figure, both robot and vehicle are excellent. I love the original just for the nostalgia of the figure. The Cybcon 2004 Bumblebee has a special place in my heart. Cybcon was a local Transformers convention and a place where I started to meet other Transformers fans. I purchased the exclusive Bumblebee figure and held onto it for a year, I had a major computer crash and needed to get some money quick to rebuild my machine and ended up selling the figure. This was before I started collecting Bumblebee. Once I started the focus on Bumblebee I always felt regret that I sold that piece as there were only 25 made and the chances of me getting a hold of one is next to impossible. Several years later a friend of mine needed some help with his dealer table and I offered to help. As a gesture of thanks he gave me a Cybcon 2004 Bumblebee, I was floored and remain so to this day, he could have sold it for hundreds of dollars but instead gave it to me. It’s a reminder of the generosity of friends, of collectors and that happiness doesn’t come down to the almighty dollar. If I ever have to sell my entire collection, that will be the last thing on my shelf and even then it will be given back to the original owner, because I refuse to sell that figure ever again. 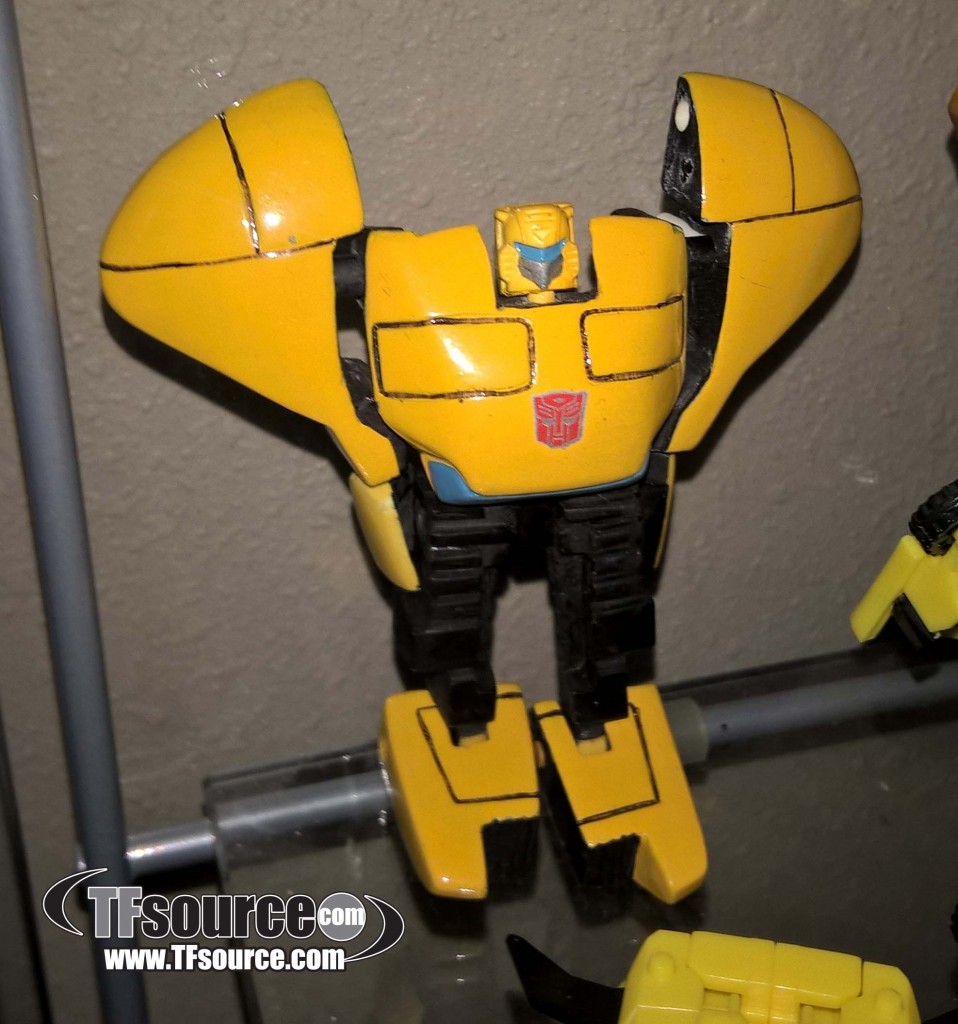 Cybcon 2004 Bumblebee. A truly rare Bee to come across. 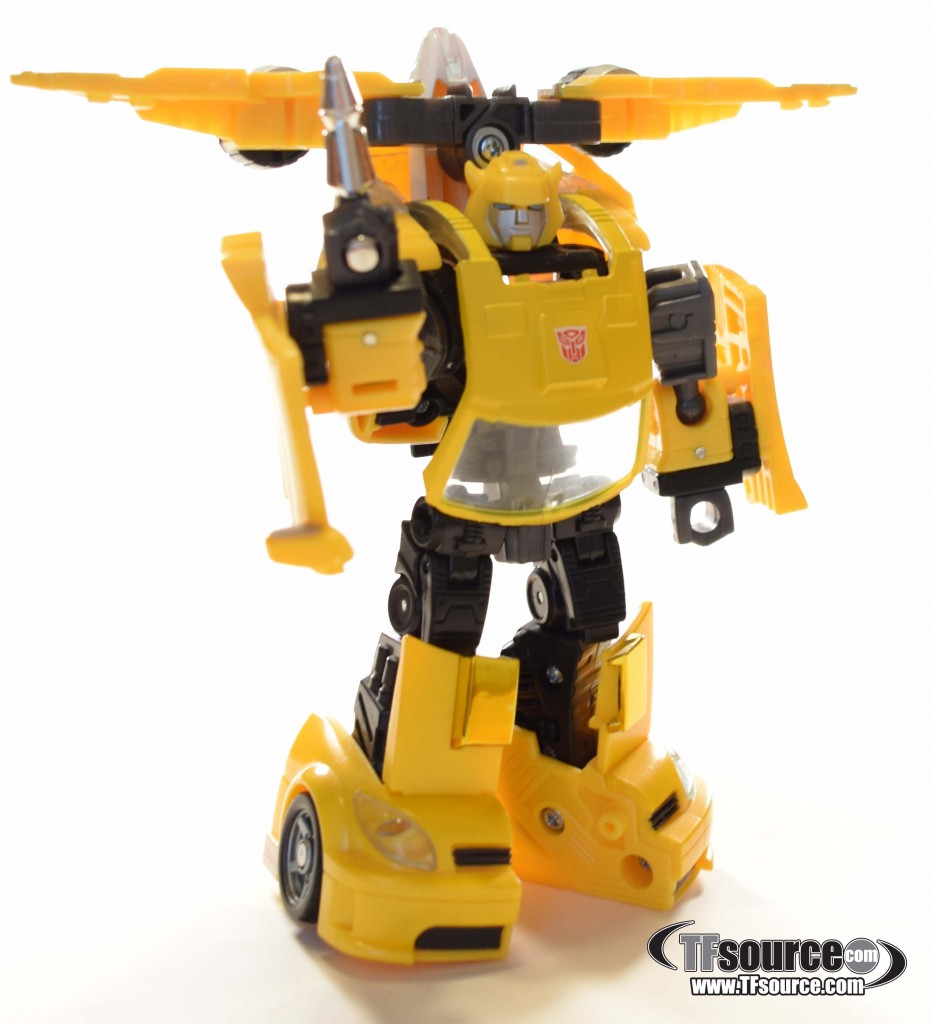 The amount of Bumblebee’s that have come out in recent years is astonishing. It’s easy to get burned out with that much yellow on the pegs, reason number 1 of why he’s so disliked perhaps. With that in mind, next question:

3 – Why do you collect Bumblebee toys / merchandise? Are there any rules you stick to when going about this subset of your Transformers collection?

Secretcode – Thanks mostly in part to being released at least once a year for nearly the last decade, Bumblebee feels like one of the few constants in the line and as such can be used as a measuring stick of sorts to catch on to various design trends in each Transformers line whether it be a twist an individual designer does on a toy or line to make it his/her own, or gimmicks that sweep an entire toyline like Mechtech or Automorph. Also yellow is my favorite color, so that might have SOMETHING to do with it.

If you want to read more about Jared’s answer and his exploration of design trends, you should definitely check out his TFW2005 Bumblebee article: Yellow Gold.

Hollywood Hoist – Bumblebee was my first Transformer ever which kind of led to the idea of focusing on the toy/character that started it all. I have a few rules but they aren’t concrete. I tend to get at least 2 of each figure: one sealed in box and one loose. A box set has to have 50% or more Bumblebee in order for me to display it sealed. No third party figures, but I have several customs. I don’t have clothing or posters in my collection, but I do collect a lot of merchandise. For the figures, I like to display one in robot and one in vehicle for most of the figures, but space is becoming a lot more scarce. 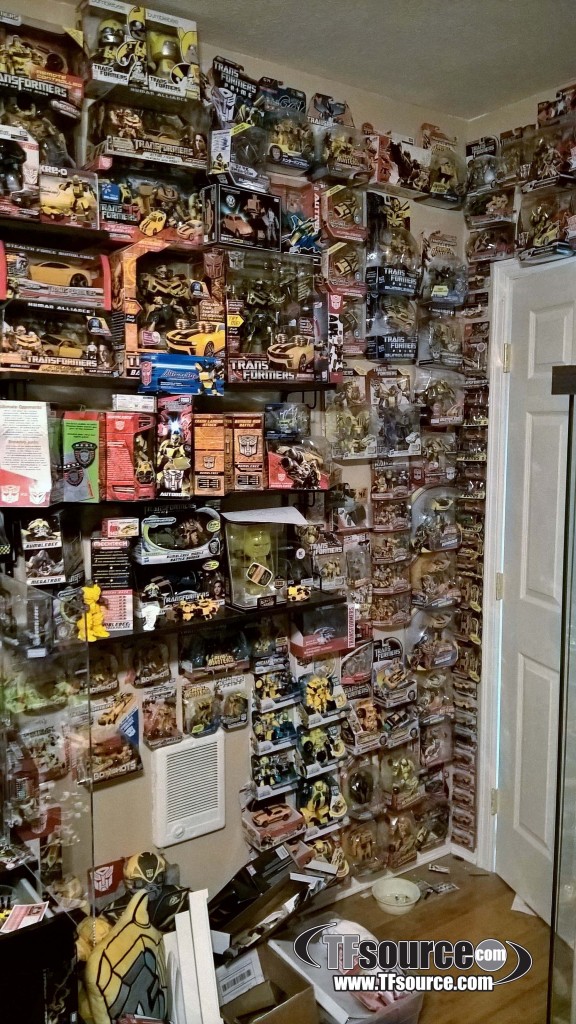 It all started with one Bumblebee …

Right now these collections seem so impressive, but there’s always a starting point. For the few of us who enjoy chasing down Bumblebee toys, remembering our first Bee brings back fond memories. My first “sting” was the Animated Deluxe Bumblebee. It seems so long ago, yet it’s still a relatively young mold.

4 – What was your first Bumblebee toy and do you you still have it?

Secretcode – Being raised on Beast Wars, Bumblebee wasn’t exactly a character I was familiar with until I grabbed the Classics 2006 Bumblebee. He was actually my first online purchase, and the only reason I got him was because I thought “Well I can’t have Classics Prime by himself, I guess.”

Hollywood Hoist – It was Christmas 1984, and that wonderful little bug was waiting for me in my stocking. That very morning I pulled his leg out a little too far and it became disconnected, my mother was able to fix it.  Unfortunately during a toy purge all my Transformers were sold off.

It’s fascinating to think of our first Bumblebee toys … and then flash forward to just how different of a character he is now. Those changes can be attributed to the live action movies, which have essentially forever changed Bumblebee.

5 – Let’s talk about the live action version of Bumblebee: Has this version of the character been good or bad for the brand? Don’t hold back!

Secretcode – He’s fine! The good thing about Bumblebee’s expanded role since the movies have started is that even if you don’t like what the movies did with the character, the increased exposure for Bumblebee in general has led to many alternate styles of Bumblebee and many different takes on the character/design from the pucky little jerk in Animated to the uneasy leader of IDW and the new RiD cartoon. You don’t like one version of Bumblebee? It’s okay, because there’s probably a dozen more out there you can give a shot. 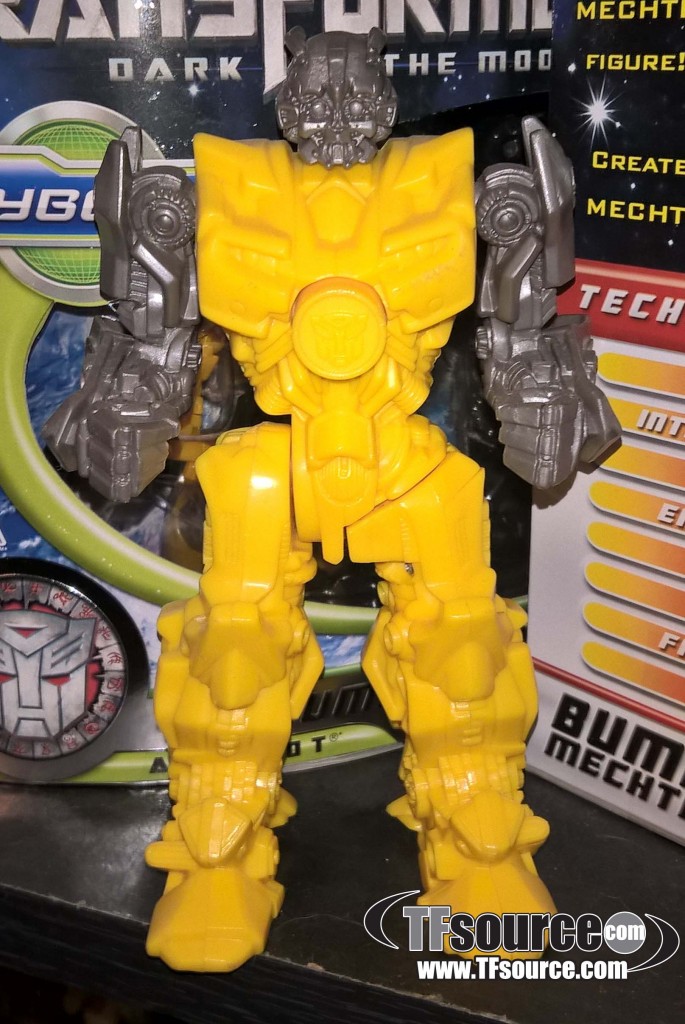 I believe the movies have been overall great for the brand, it brought Transformers back into the forefront of popular culture. There is so much Transformers media out there now that no matter what your tastes are, there should be something you like. It may not be what’s currently in production, but since every few years they do something new, people won’t have to wait for the next incarnation. 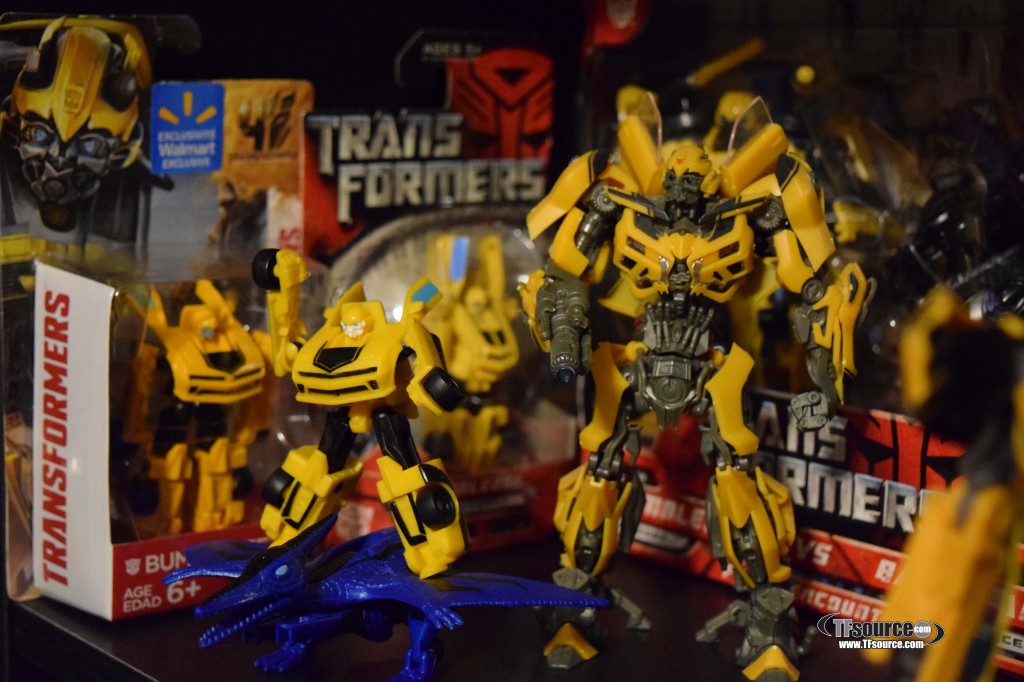 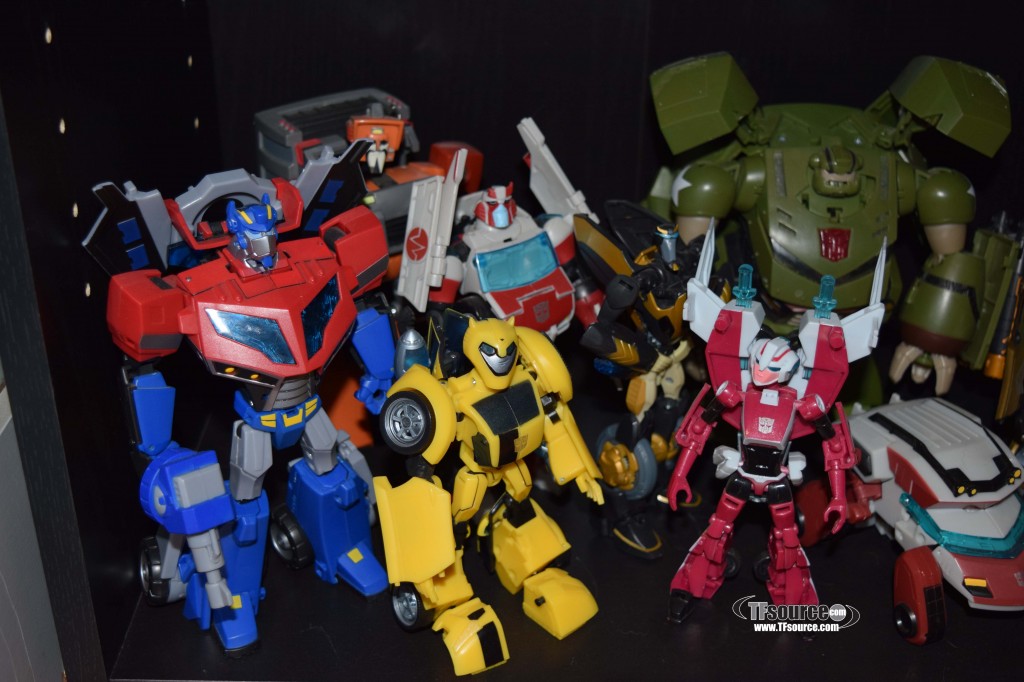 We’ve discussed our first and favorite Bumblebee toys, we’ve discussed just how obsessed we are with collecting and adding to our “hives,” what’s next for the character?

6 – Where do you see Bumblebee going in the future of Transformers, both fiction and toy wise?

Secretcode – Aside from the usual expectations (more movie Deluxes, more show-based toys, etc) it’s kinda hard for me to even guess given the broad span of size classes and styles of the character, not to mention the fact that the ONE toy I thought would never get made (Masterpiece Bumblebee) ended up happening. I have no idea where Bumblebee is going next, and that excites me. 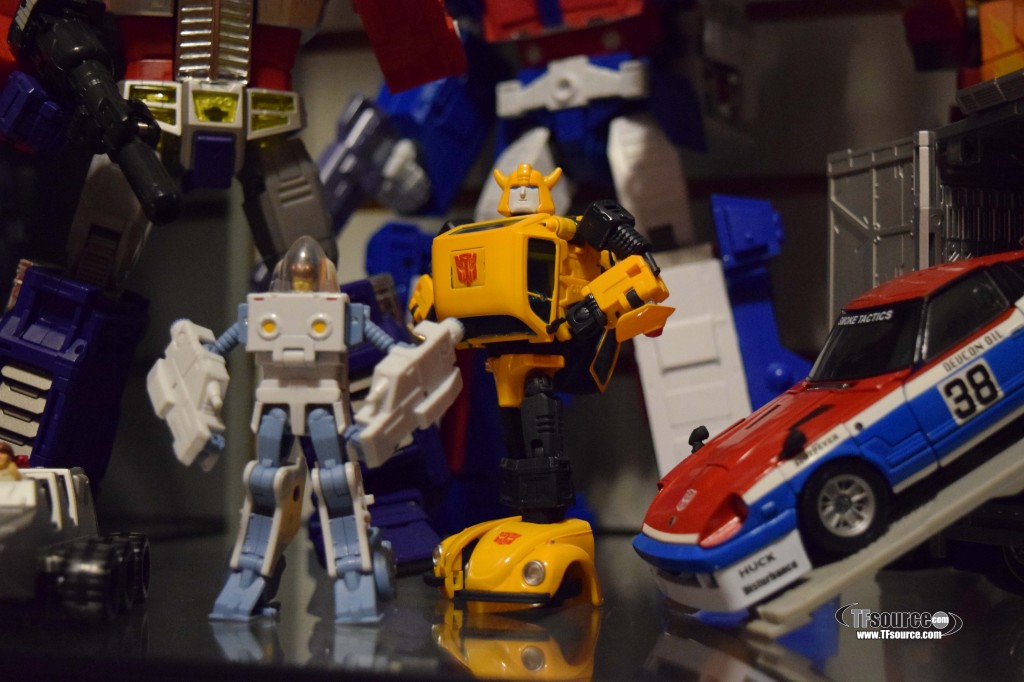 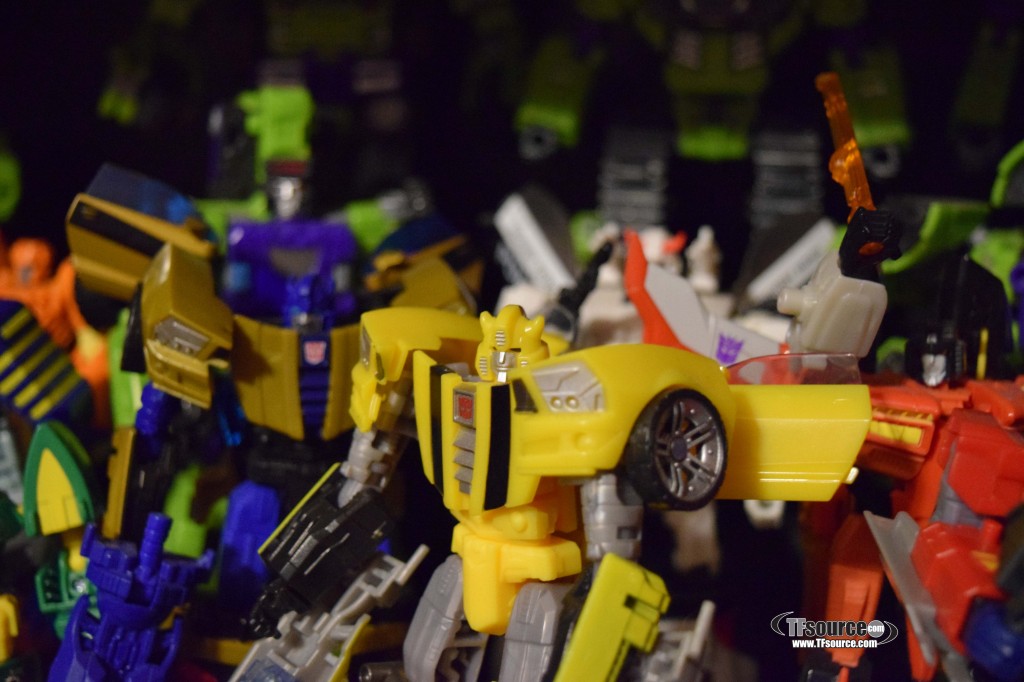 Hollywood Hoist – Bumblebee has evolved so much over the years, from the friendly little scout, to a seasoned warrior in the live action movies, to a smart-alecky little guy in Animated and now to the unlikely leader in Robots In Disguise. Just like Transformers are ever evolving , the character of Bumblebee is constantly evolving. I personally enjoy seeing different takes on classic characters as it keeps the franchise from growing stale. 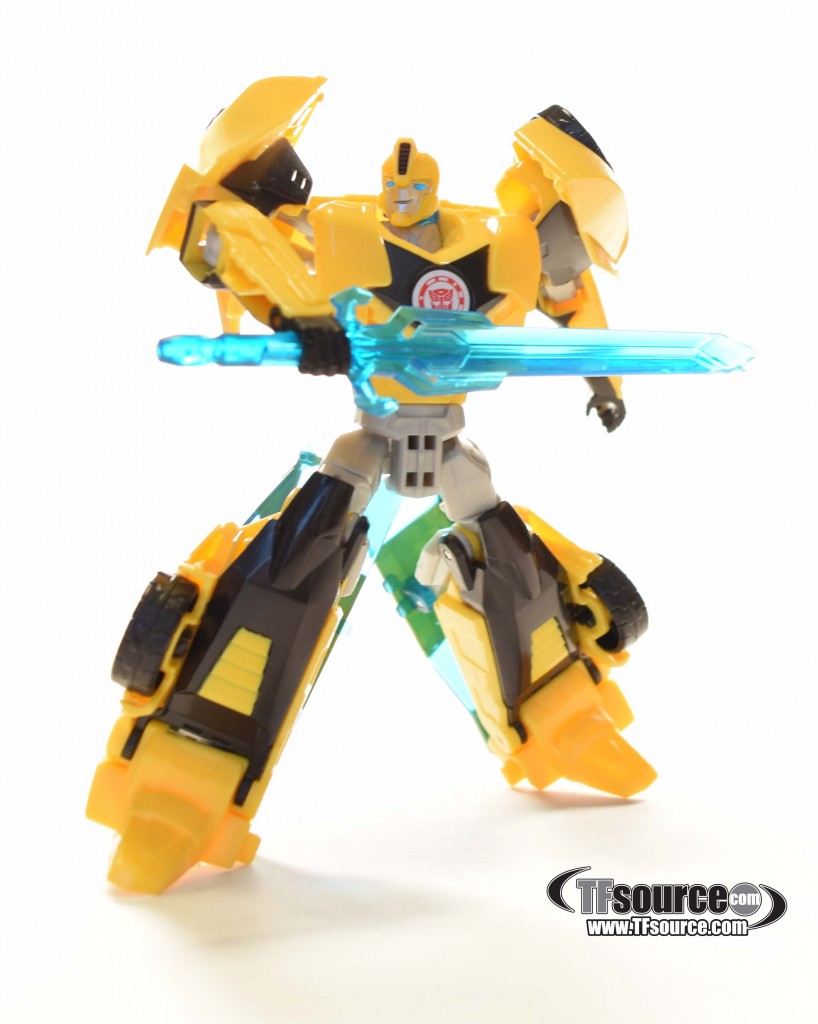 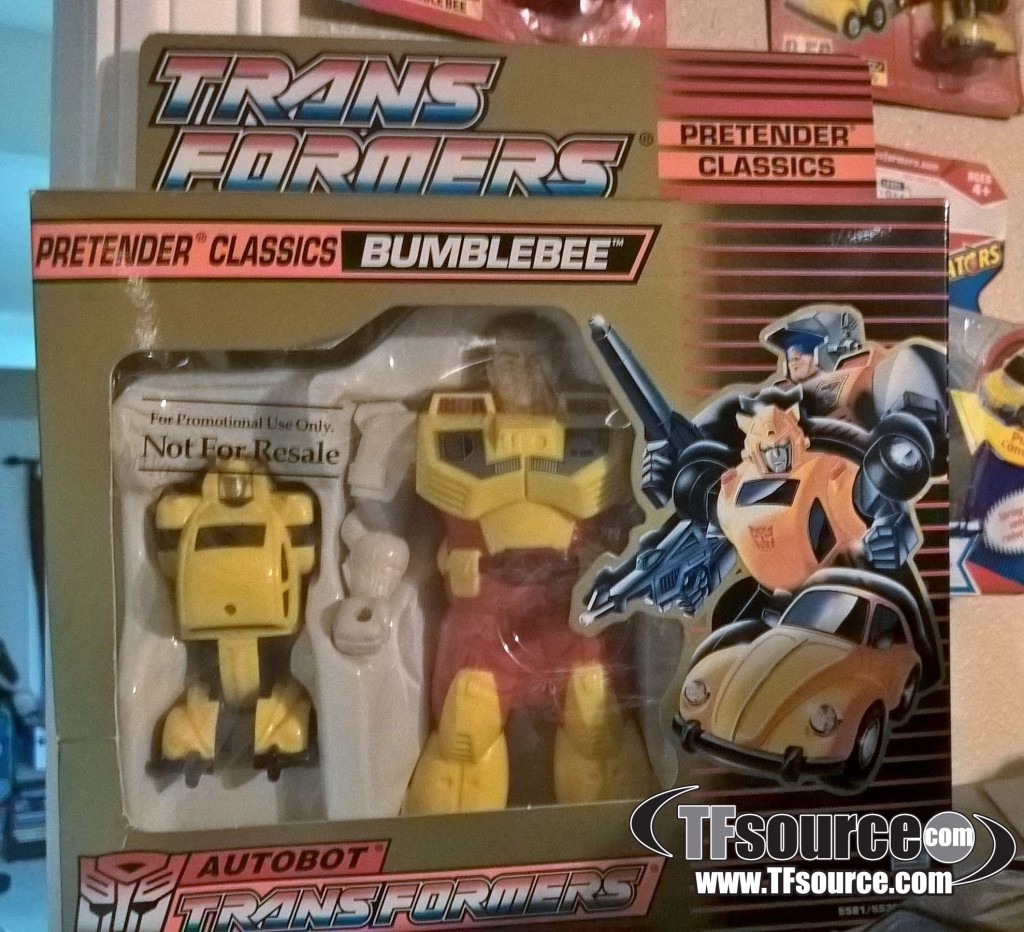 Pretender Bumblebee. A lot has changed. Also, not for resale.

Regardless of many differing opinions of him, Bumblebee has been thrust into the forefront of Transformers and is likely to remain there for some time, whether that is for the best … or if it’s just for more internet fan rage.

Many, many thanks to the contributions made by Secretcode and Hollywood Hoist. I am thrilled to have had this chance speaking with two fellow Bumblebee enthusiasts.

This entry was posted in Source Articles Tagged with Bumblebee, G1, Masterpiece, Prototype

Flight Of The Bumblebee