What Do They Think? 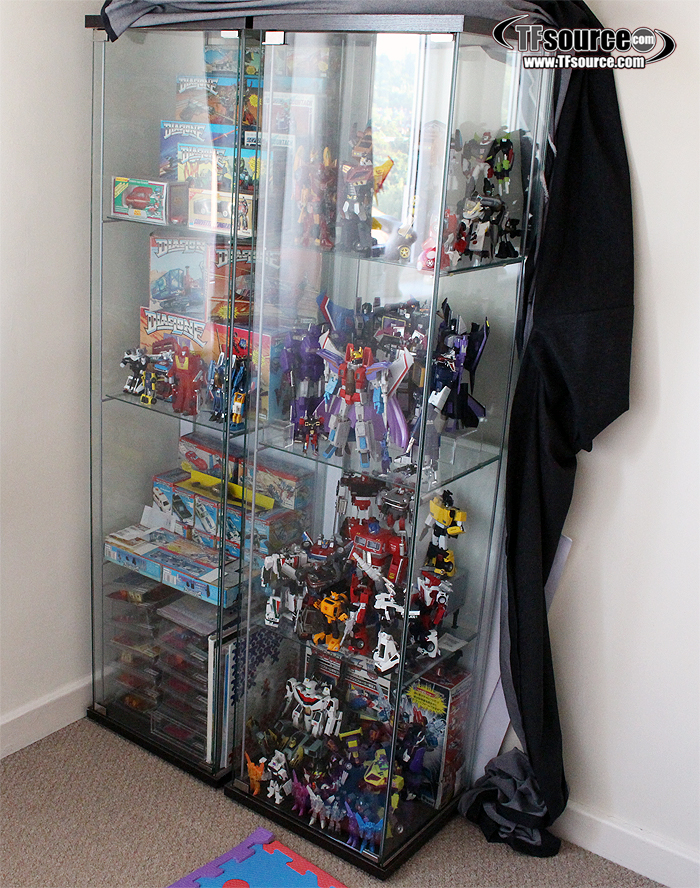 About 3 years ago we interviewed 3 very active and community-involved Transformers collectors’ wives to find out How The Other Half Live. For my 200th TFSource Blog Article (not counting interviews), I decided to once again ask those closest to me how they viewed my collection of robots. I’ve asked my wife. my three year old daughter, and for a bit of distance, the partner of a very close friend. I’d like to say I am not concerned about how others see my hobby, but having recently discussed the implications of what happens to our toys when we die, I feel as though I have a greater responsibility to those around me to know where they stand with respect to my toys and how it affects them. The growing feeling that I own too many toys that cannot be adequately housed also weighs heavily on my mind, as the pictures in this article will demonstrate with how my place looks currently. Admittedly I asked my daughter for comic value, but I still respect what she had to say. 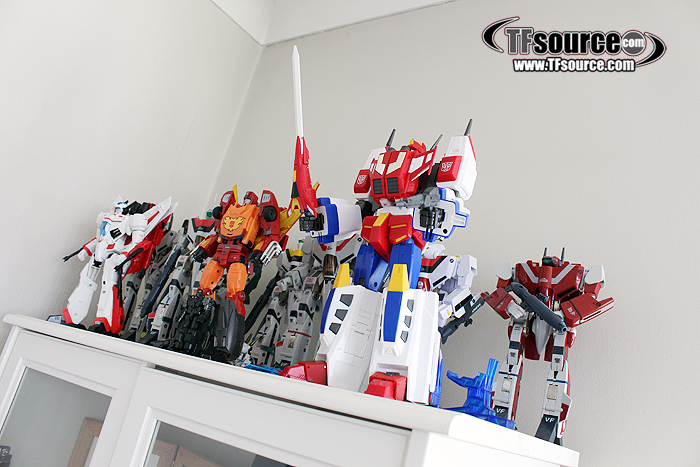 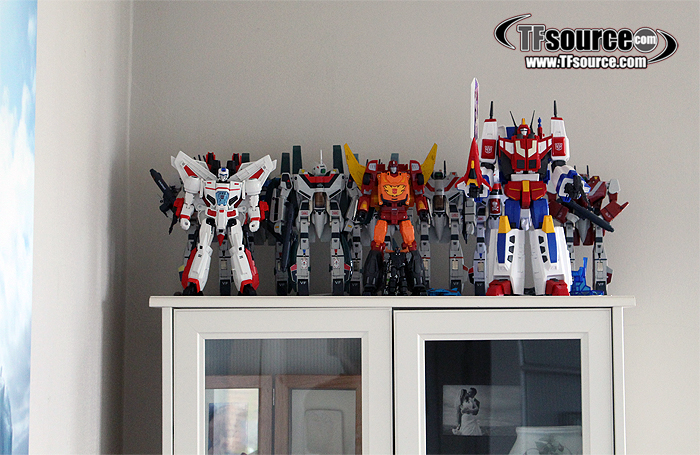 Legends Jetfire and his crew of Valkyries

What do you think of my robots?

Starting with a very simple, open and general question to get my interviewees in the mood for honesty, I know my wife was anxious about sounding too negative or honest, but she said “I have a love-hate relationship with them. I dislike the space they take up, some of them are pretty, some of them are not, but they do occasionally make us money and for that I like them“. For someone who had no concept of a grown man collecting toys, while the above sounds slightly negative and cold, she’s come a long way. Don’t let her answers in the article from 3 years ago fool you, she had no idea what she was getting herself into! My daughter simply replied “Not nice“. However, when I asked her immediately afterwards if she liked my robots, she said “Yes!“.

My close friend’s partner has known our family since its inception and went to uni with me, and has been to our place many times, knows of my hobby and interest. She said “I like them. I really like the fact that you have that hobby, even though I don’t know much about it, it’s kind of my era. I like the fact that you know a lot about them, it’s very specialised, and you know what’s important to you and what you like. I did actually think they were really cool when I was younger, I just never really got into being able to do the transforming“. 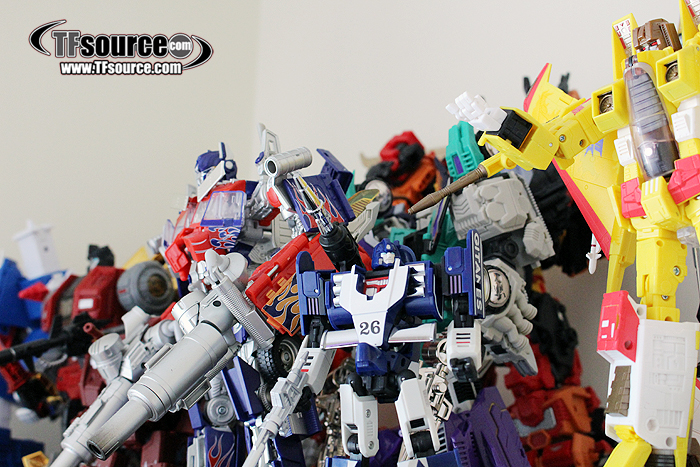 The bots on top of the Detolfs

How often do you notice the robots?

I should first explain that I have 2 Detolf display cabinets in my daughter’s playroom which are covered up with a black denim shroud, but there are a number of toys on top of the cabinets. In the living room they are on my desk and also on top of a larger cabinet. When asked how often she noticed them, my wife replied “All the bloody time!“. Obviously I set myself up for this one where my wife is concerned, but when they migrate from restricted display cabinets to the tops of large pieces of furniture or available desk space, anyone with a keen interest in interior design as my wife does, has a right to object “Especially the ones that live in our living room, on top of our cabinets and on your desk. They tend to spread out!“.

My friend’s partner said “I actually don’t often notice them, I don’t even remember seeing them when we go into your daughter’s playroom“. Despite having the shroud down most of the time, there are still a fair number of large bots above the shroud. “I think some were maybe near your computer, I can’t remember what I’ve seen recently, but I feel like I didn’t see that many“. An interesting disparity between the answers here, but when my friends visit rarely due to family commitments on both sides, they’re not really here to pay attention to robots about the place, especially when we’re interested in seeing our children play together. 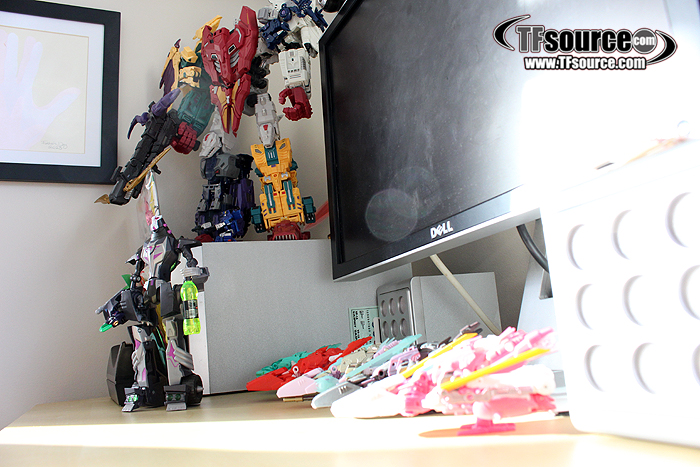 How many robots do you think I have?

This is an important one in the unwelcome event that my family would be responsible for doing something with the collection should I not be able to myself. It’s also key to knowing how aware others are of just how much I own, have bought or been given, its implications for moving and storage generally. “Are we counting the ones in storage? Four hundred?“. I have four hundred and fifty including those in storage. She knows. SHE KNOWS. My daughter said “Maybe many – Six“.

Our friend said “Something like that could be deceiving, in your flat? Oh in total. Fifty?“. I was not in a rush to provide an accurate figure, but if you’re reading this now J, you’ll know why my wife was laughing in the background while you were answering! 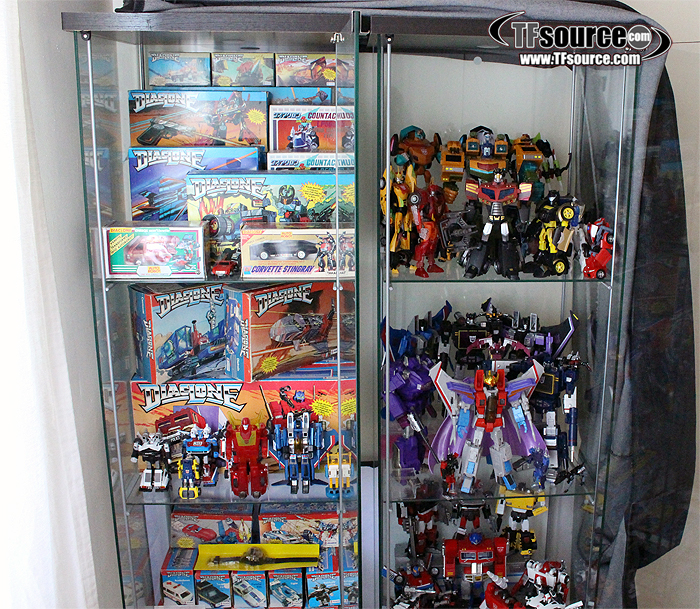 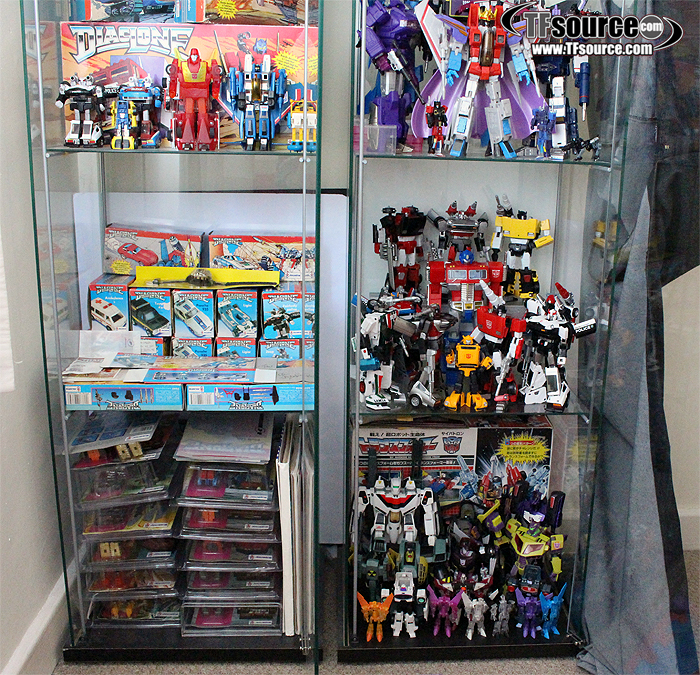 How many do you think I should have?

This is clearly slightly unfair of me to ask as none of the interviewees would want to hurt my feelings or imply that my collection was out of control, in need of trimming or having a negative impact. That’s a lie, my wife “About 200, half what you have” and daughter “Eleven” both just said it how it is. At least my daughter advocates increasing the number from her initial guess of six. I love that girl.  Our friend laughed and said “oh-hoooo, hmmm, I’d say…twenty“. I can certainly appreciate how, to someone who hasn’t seen them in totality and maybe doesn’t notice them as much as my wife does, twenty would seem a plentiful and sensible figure. I also appreciate how every TF collector I know is simultaneously outraged and baffled at how that could be possible! The funny thing is, I probably could live with twenty. On display. 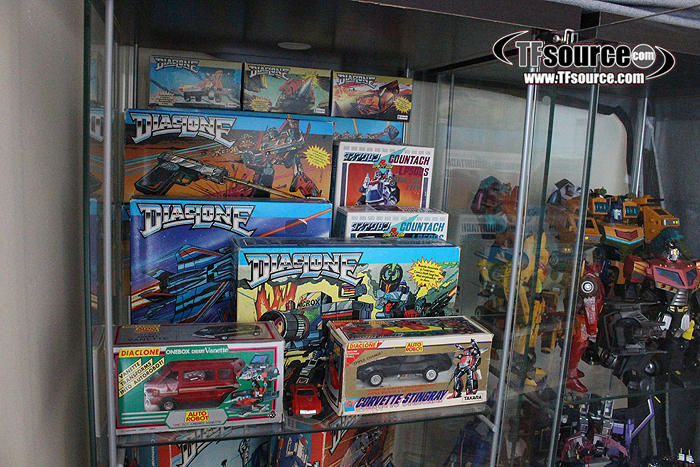 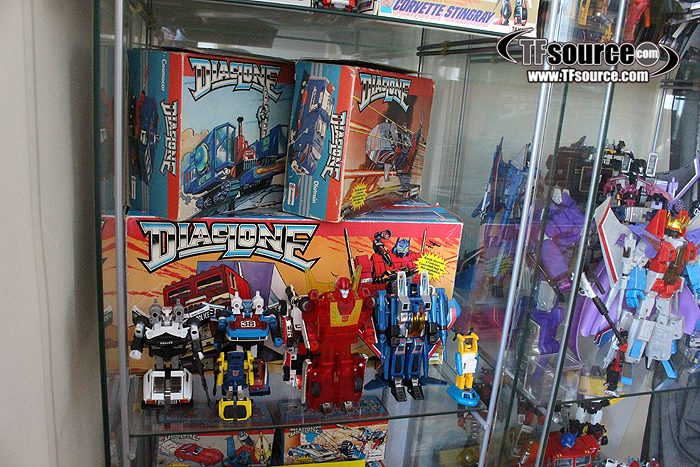 How do you think it affects our lives?

A big question and one that undoubtedly, for any collector, would contain facts that make for uncomfortable listening. My wife said “On a day to day basis it’s annoying because it takes up so much space in the flat, but then I am inclined to say that that’s a small price to pay because the benefits outweigh the annoyance of the space they take“. What about aesthetically? “I don’t mind that so much, I just don’t understand why there has to be so many of them. I’m not a fan of the really really big ones, because we have to figure out where they are going to live. I’ve grown to not mind them, because I used to hate them. I like that it gives you and our daughter something to bond over, and her learning to transform ones that I don’t have a clue how to do is really good for her motor skills and it’s a challenge for her“.

Our friend offered: “I think it’s probably one of those things that on a surface level we hear jokes about it, and as much as I think it’s quite cool, probably living with it might be difficult. The point I’m thinking of is that even less than the space that they physically take up, probably either the money and time. It depends when the time is that you spend on it, if it’s time that you both happily dedicate to individual things, then that’s ok.  If it goes beyond that and becomes more time-consuming it’s an issue. Money is the other thing, if you spend more than you sell, or a big proportion of what you earn goes into it, I could see that those two things could be more a point of contention“. Very common issues with partners of collectors and community contributors I should think. 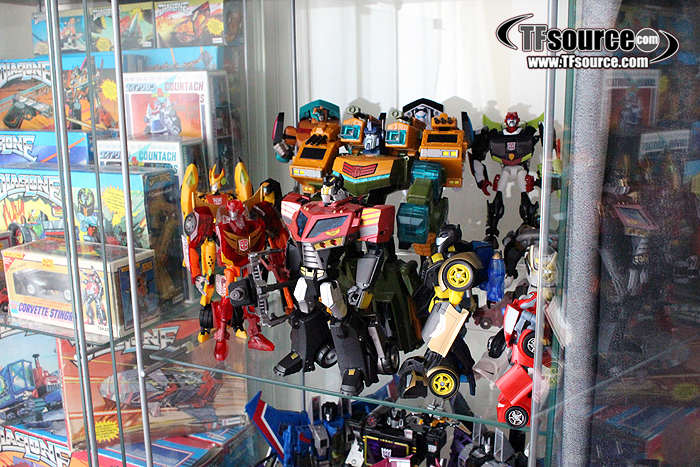 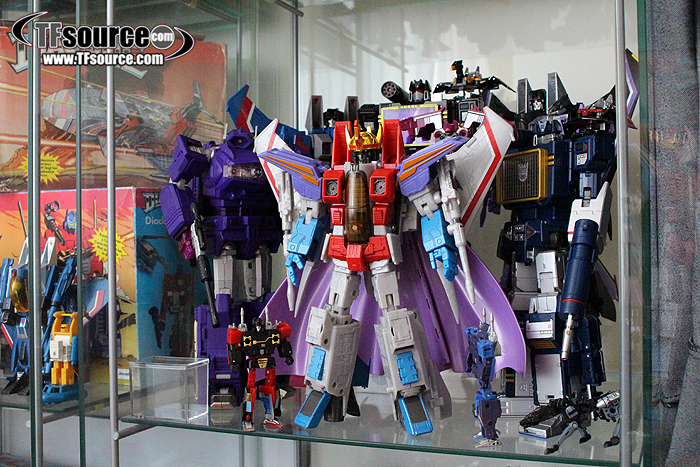 Which is your favourite?

I know this seems a silly question when the tone has been so serious, but it’s a good gauge of how much attention people pay to the collection, the toys and if they have made any sort of connection or afforded any affection to the objects that mean so much to us. My wife answered as follows “Oh, I like the new metallic golden ones, the ones with the gold bits, the dinosaurs (FansToys Iron Dibots), they’re quite glam. But, I like the really old-school Optimus Prime (childhood Powermaster Optimus Prime). A very basic-looking Optimus, not the really fancy snazzy ones, this one looked loved“. My daughter said “Strongarm (RID 2015 warrior class Strongarm)“.

You might think those are pretty stereotypical answers, my wife liking the shiny gold ones and my 3 year old girl liking the main female cast member of the new show we watch together, but I was quite touched at how PMOP was picked by my wife as she could see how old and enjoyed that figure was. An appreciation of old school Generation 1 is something to be celebrated and nurtured. 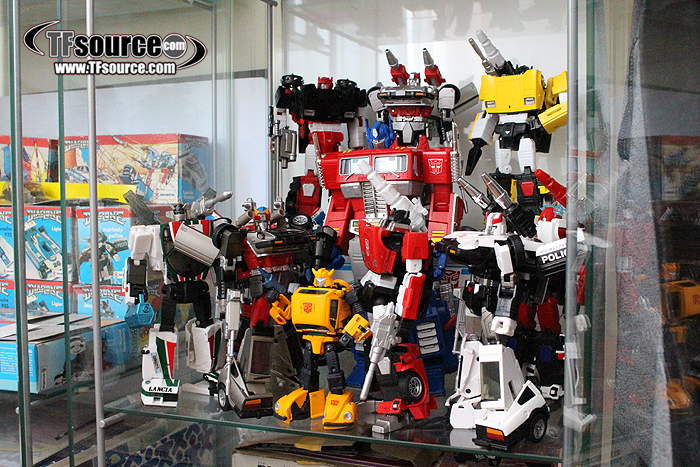 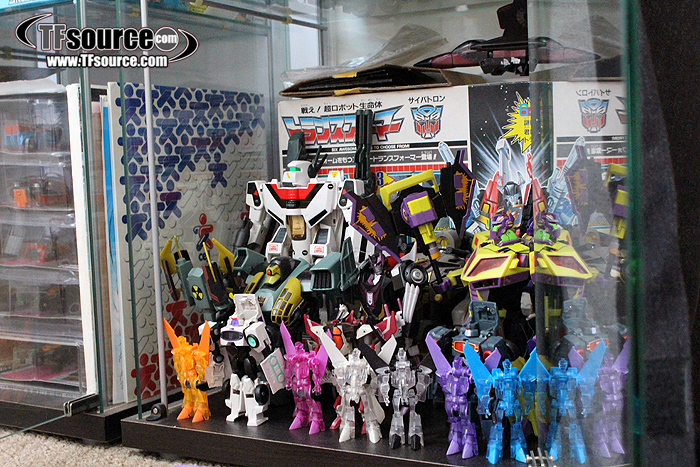 Where do you think they should be?

From my wife: “I think they should be in confined display cases, not propped up on whichever piece of furniture that they fit on. Thinking about where we live now, two or three max display cabinets are acceptable. In a bigger house maybe 4 or 5. I don’t think it’s acceptable to have an entire room dedicated to it unless you live somewhere with considerably more space“.

Our friend gave her opinion also: “I think I quite like them in your daughter’s room, the playroom, if you had a bigger place where you had multiple rooms for that kind of thing then I don’t necessarily think it needs to be restricted to a child’s room. It wouldn’t bother me to have the odd one on display in the living space but it depends on whether it’s more than that. I’d probably say ‘no, you keep that in your own space’ and it would be confined“. Keep in mind that all interviewed here have lived in London, UK for quite some time, where space is at a serious premium and any living space handed over to things like display Transformers is a luxury. 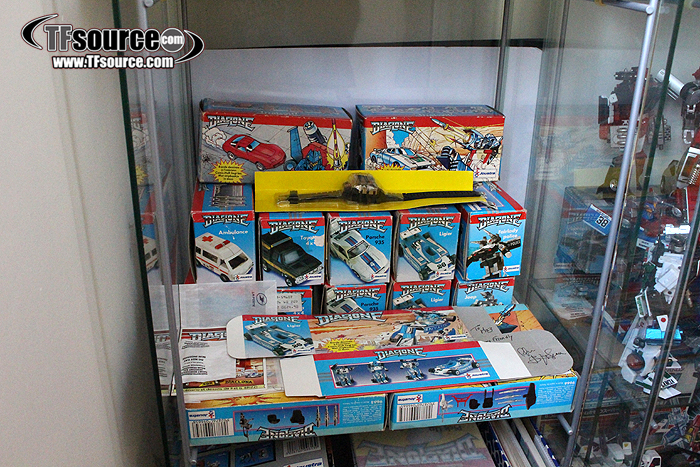 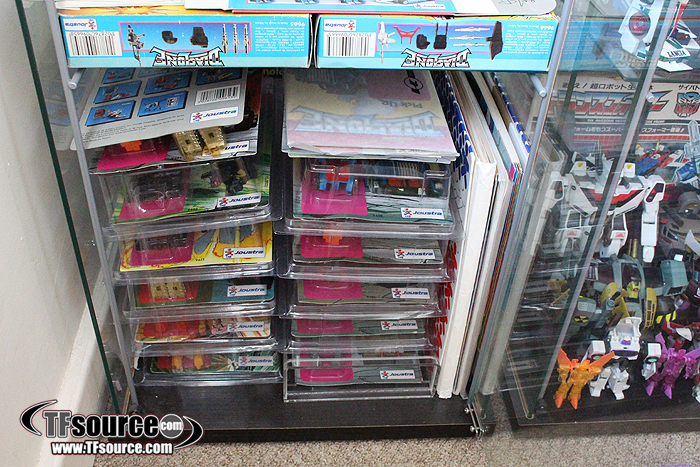 Even cabinet space is at a premium

Those were the last questions asked of the adults, but I had a few more for my daughter. I asked her which ones I should keep, to which she replied “Strongarm, Bumblebee, Drift“, all RID 2015 Transformers, all Transformers that as a 3 year old she has learnt to transform from car to robot. It’s all about ownership and getting them involved, you see. When asked what I should sell, she said “Not my Optimus, not my Grimlock, you should sell your Optimus“. Toddler logic or a sign of things to come?

Entertainment value aside, I must admit that none of the answers above have surprised me. I know – and we probably all know – the kind of effect our collections and hobby have on those who live with us. When the quantity of toys is not in sensible proportion to the living space, finances and time available, there will always be conflict and disagreement on what is acceptable and what is not. Moderation and compromise are not new concepts in relationships and families, but we could probably all think of people who have lost sight of that in their collecting. It’s because of the known effect on others, and their acceptance and their loving of us despite the aforementioned effect our so-called hobby (read: lifestyle) has on them that we must act so responsibly in life and prepare for all of those things we discussed a few weeks ago here. 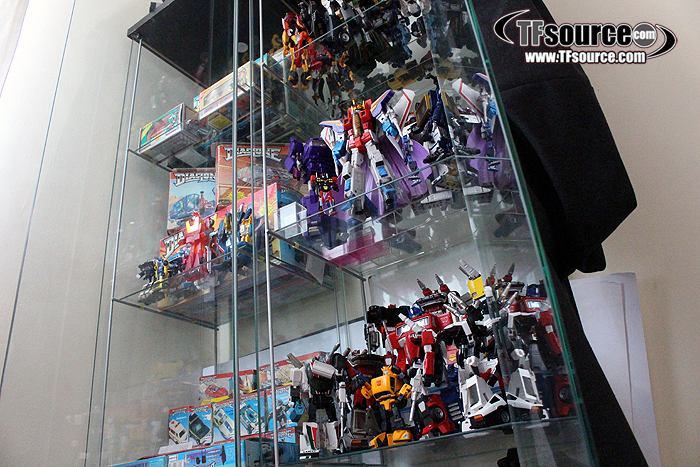 A deep, heartfelt and loving thanks to my interviewees this week for their contributions and their honesty.

What Do They Think?