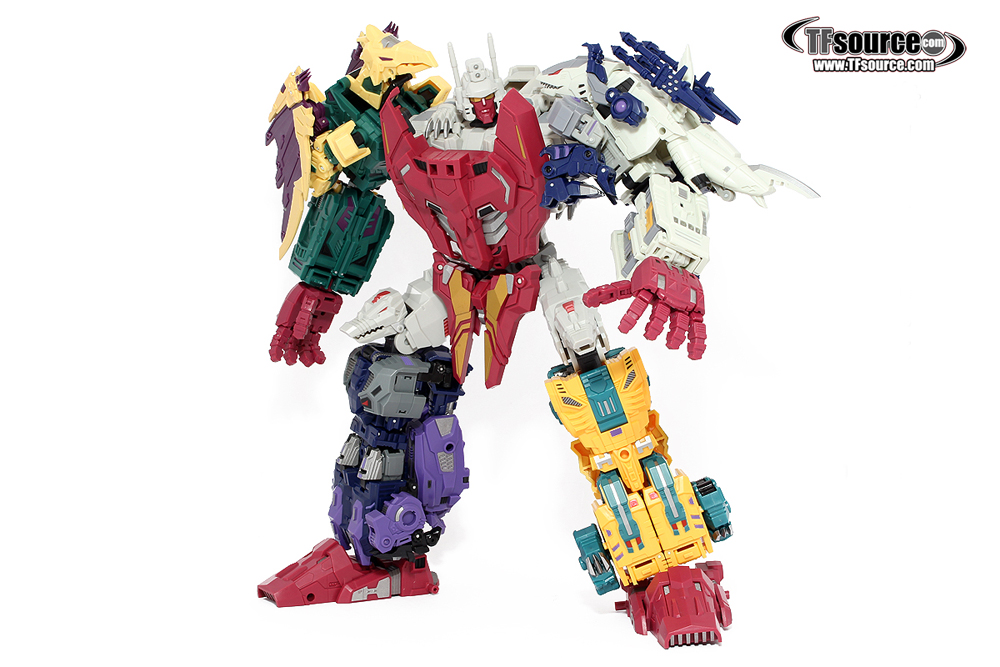 In less than one year, vastly improved 3rd party company Unique Toys have started and completed a combiner project. With the upcoming release of the fourth and fifth members of Ordin (Abominus), UT will give Transformers collectors their first unofficial group of Terrorcons to stand beside either their Combiner Wars toys or other unofficial behemoths such as MMC’s Feral Rex or Maketoys’ Quantron. 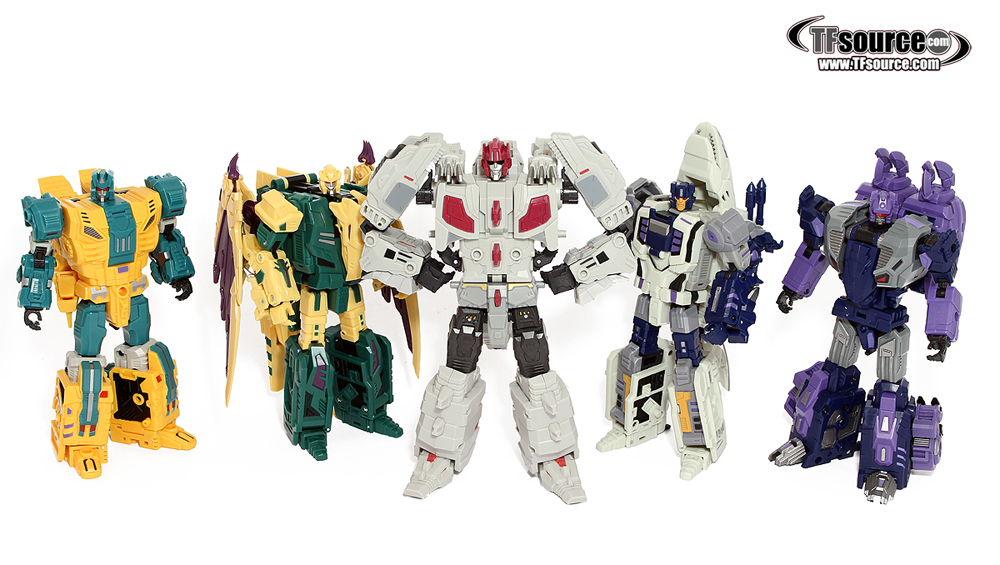 The first three members of Ordin, O-01 Troll (Blot), O-02 Alberich (Rippersnapper) and O-03 Fenrir (Sinnertwin), came out in quick succession but around Chinese New Year there was a bit of a lull on the UT/DX9 release front. Then came Chigurh, Cocomone, War In Pocket releases and now Carry, O-04 Siegfried (Hun-Gurrr) and O-05 Hagen (Cutthroat) are not far off, meaning that the Terrorcons and UT’s Abominus vision are very close to being complete. 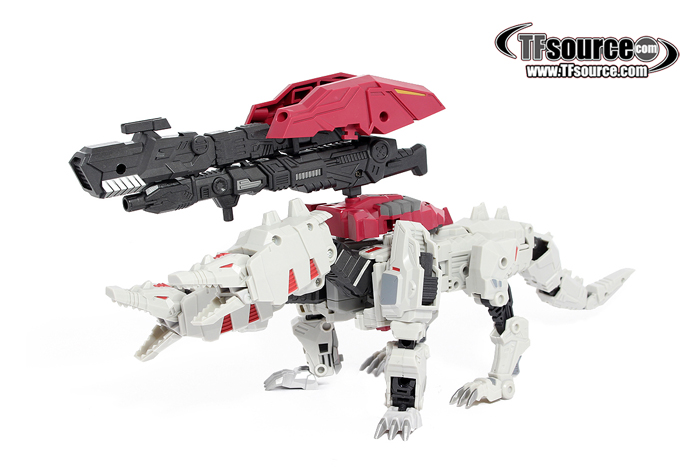 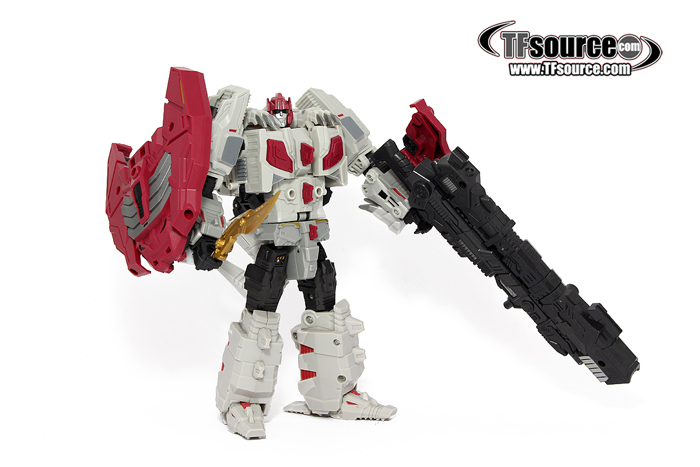 All of UT’s Terrorcons so far have been solid, playable and quality figures. Troll did admittedly have a magic about him that Alberich and Fenrir have not quite captured, but Fenrir being the most recent release had what I considered to be the most sturdy quality and best finish. They were all highly posable, they all had easy or enjoyable transformations. O-04 Siegfried is no different as he too boasts superb feel and quality, a ton of accessories including shields, guns and swords and great posability and character. The head sculpt is every bit as detailed and attractive on Siegfried as the others so far, even if their shared aesthetic could use a bit more variety. Interesting that they have not 100% nailed the toy accuracy (pink head and face, silver eyes) nor the cartoon accuracy (maroon head, red eyes, silver face), although Siegfried mostly resembles the latter. 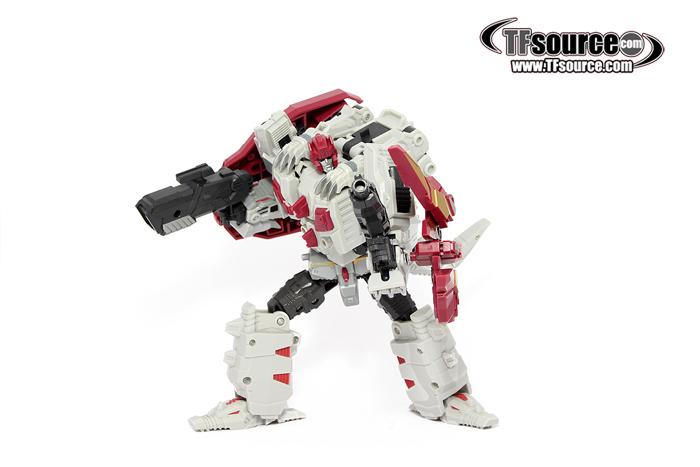 I’m not convinced on the stability of Siegfried’s heels as he did topple forwards a couple of times during posing, but he looks properly beefy and can swing a great pose with that waist articulation. His head cannot look up far which is a shame, that limits how convincing a running pose you can achieve with him. I do love how the Ordin/Abominus head slots into the fattest part of the beast tail and there’s a fair bit of complexity surrounding the panels making up his shoulders, chest and beast legs during transformation. The beast mode is very techno-organic, something that detractors will label the same ‘box-with-legs’ as was levelled at Fenrir, but the articulation in the beast heads/necks and segmented tail makes for enjoyable display and manipulation of the toy. It is a slight shame that the hind legs cannot be articulated outwards like the front ones can. Just like the G1 toy, Siegfried can wear the giant Abominus/Ordin chest piece as his shield, and he can do it with the waist piece too. You can give Siegfried the gargantuan combined rifle or break it down into its 4 component rifles and he can hold them individually. The guns can also be distributed among the Ordin members. 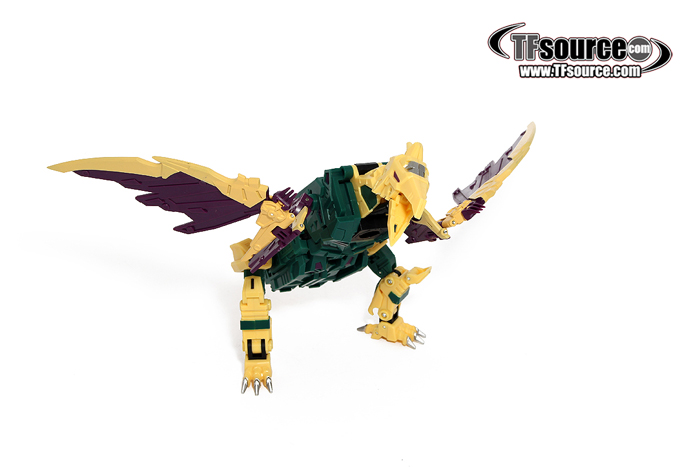 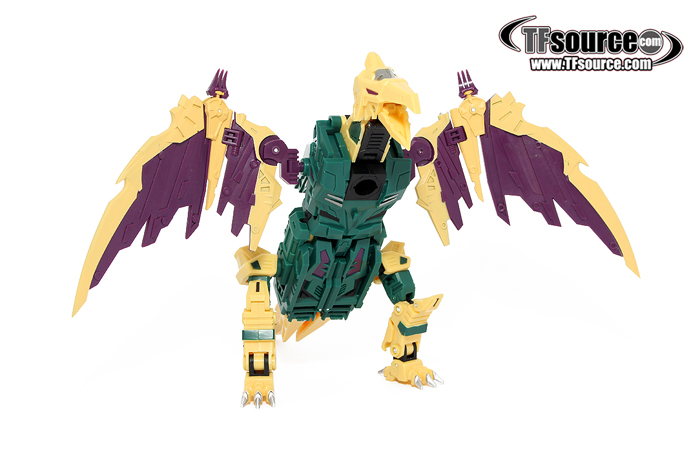 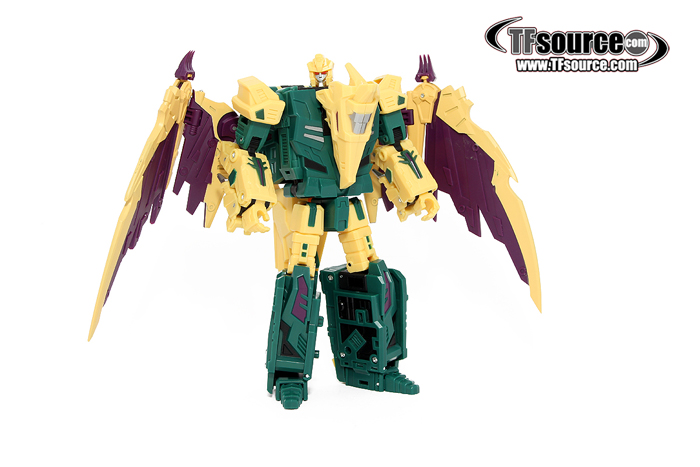 The bonus of getting combiner limbs released one by one is the ability to enjoy and appreciate each figure individually before they become a limb. With MMC’s Feralcons, the individual figures were so good (and spaced apart) that many owners find the de-combined display preferable to the combined. I suspect it will not be so prevalent a situation with Ordin, not just because the Feralcons are superior toys individually, but also because of the increased speed of release Ordin has enjoyed. With O-05 Hagen (Cutthroat), seeing as he’ll most likely be released at the same time as Siegfried, there’s a danger he will be the least appreciated of the bunch. And to be fair, he’s extremely similar in design and layout to Alberich. There is the exact same leg and foot mechanism, waist articulation and hidden combiner elbow as well as collapsing torso half. 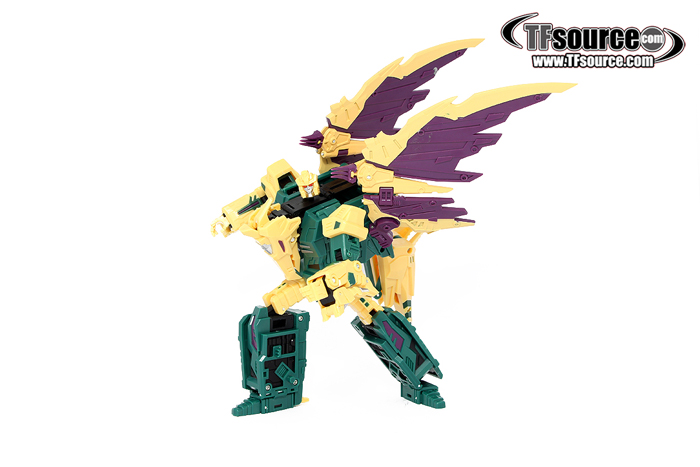 The wings are lovely and bloody sharp on Hagen, they can also be detached for him to hold as weapons, seeing as he actually does not come with any conventional weaponry at all. Or at least, my test shot did not. Cutthroat’s colours have always been lovely, and Hagen reproduces those more than well enough, again though the design cues are very similar to the other Ordin figures, seen in the head sculpt and general aesthetic. Unfortunately he suffers the same non-closing flap issue as Alberich on his hands and wrists. Once the fist is folded inside the cavity, the flap cannot close flush and it just feels unfinished. Stability and articulation are great, transformation is almost identical to Alberich with the exception of the robot and beast head/neck bringing something new to the table. The wings are a joy to pose and mess with. For me, this is probably the weakest of the 5 figures, but thanks to it being a winged beast, it’s still a fun figure and despite the flimsy feeling connectors on the beast head and neck section, I have no quality concerns. 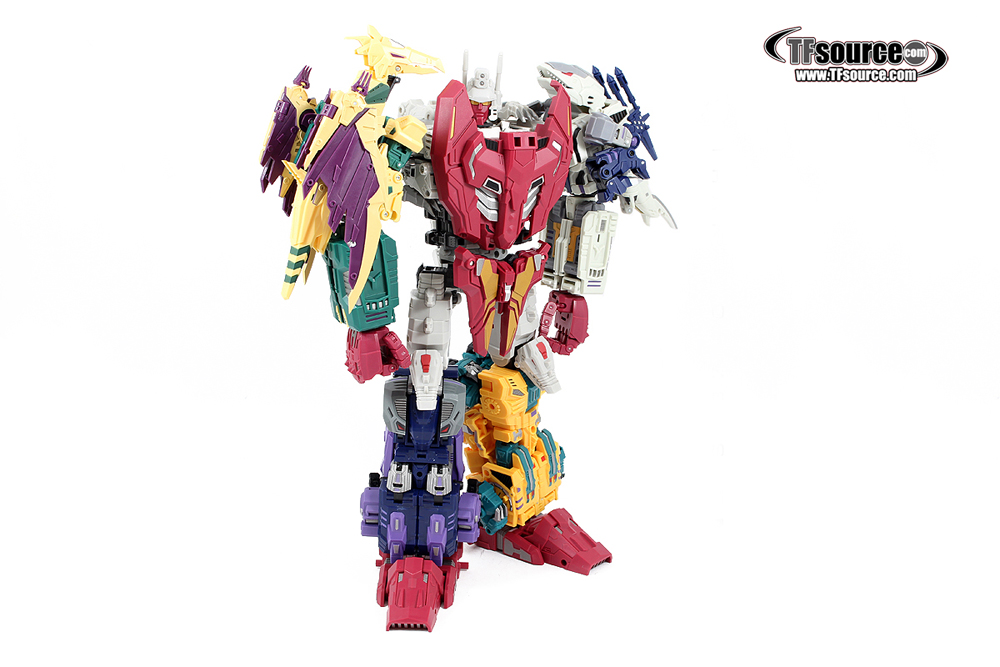 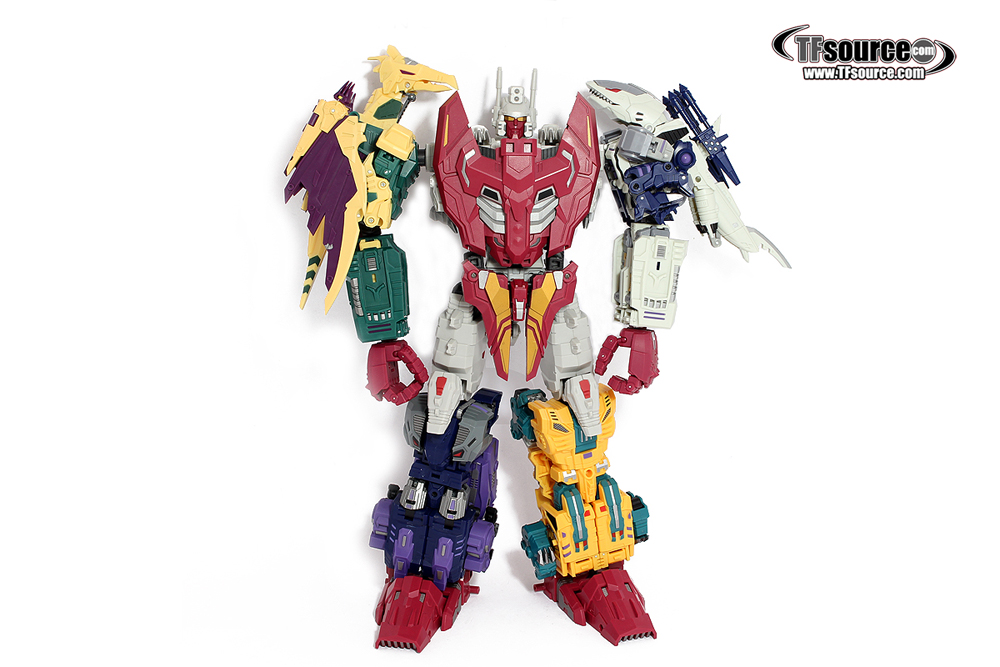 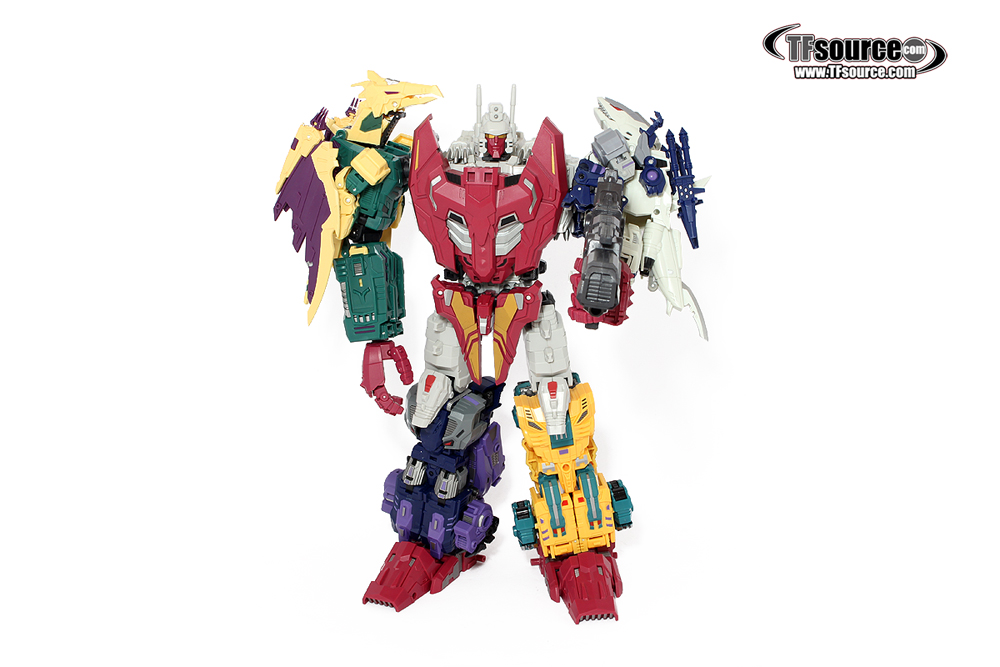 Behold, Abominus. The feeling I got upon final Ordin combination was every bit as satisfying and awe-inspiring as that of MMC’s Feral Rex (Predaking). There is enough symmetry there and a fantastic blend of colours for the wow factor. While the chest piece is quite over-powering and obstructs the Ordin robot head, it is perfectly Abominus. There is a very clean silhouette at work here and Ordin is every bit as imposing as you’d want. As much as I love the gorgeous face sculpt, it’s almost too Autobot for a fearsome brute of his nature. 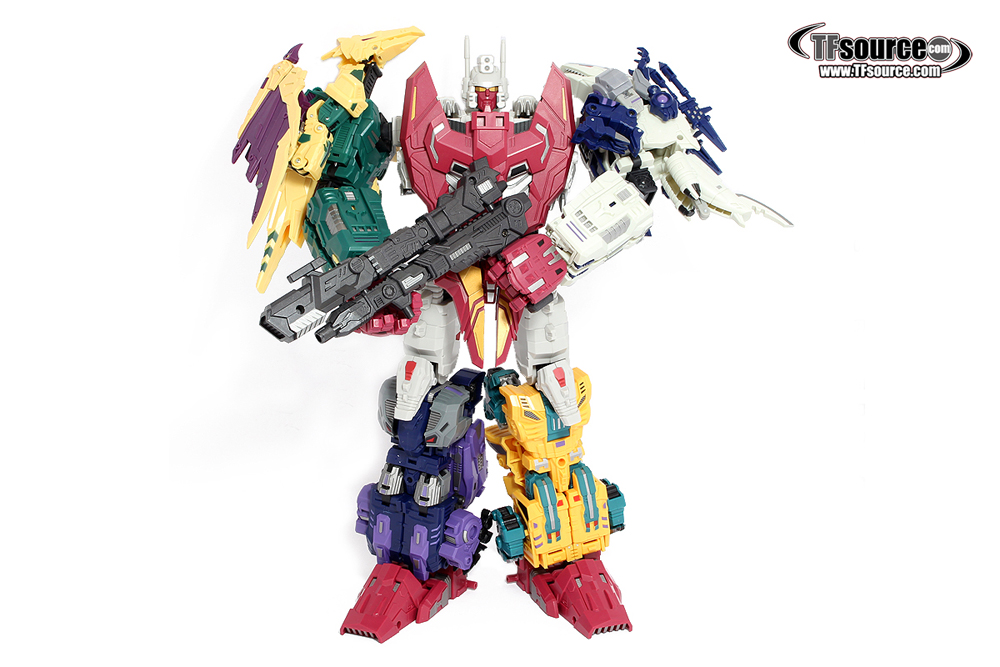 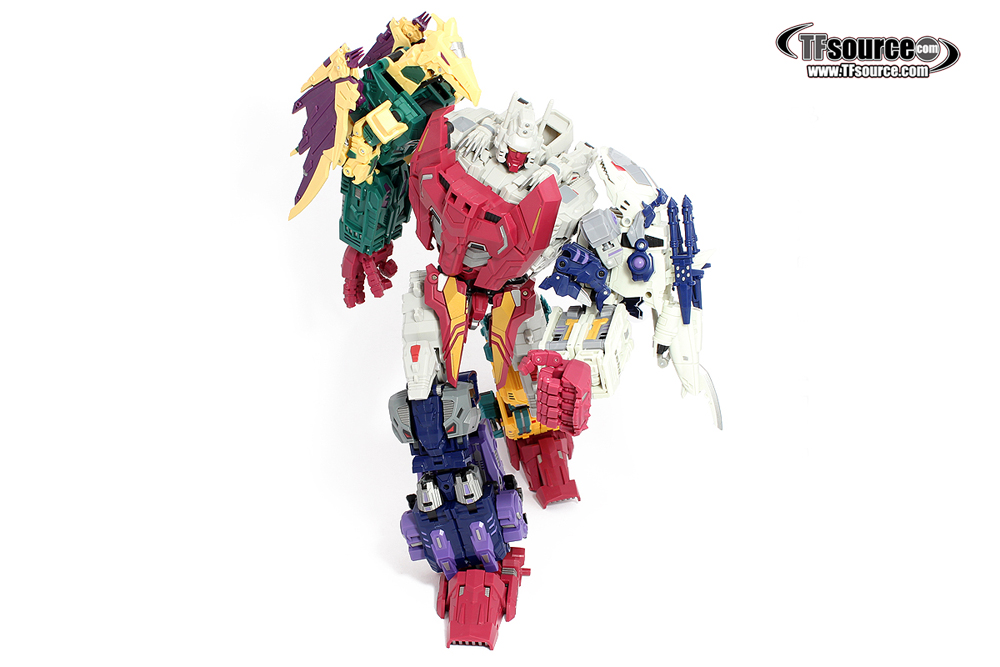 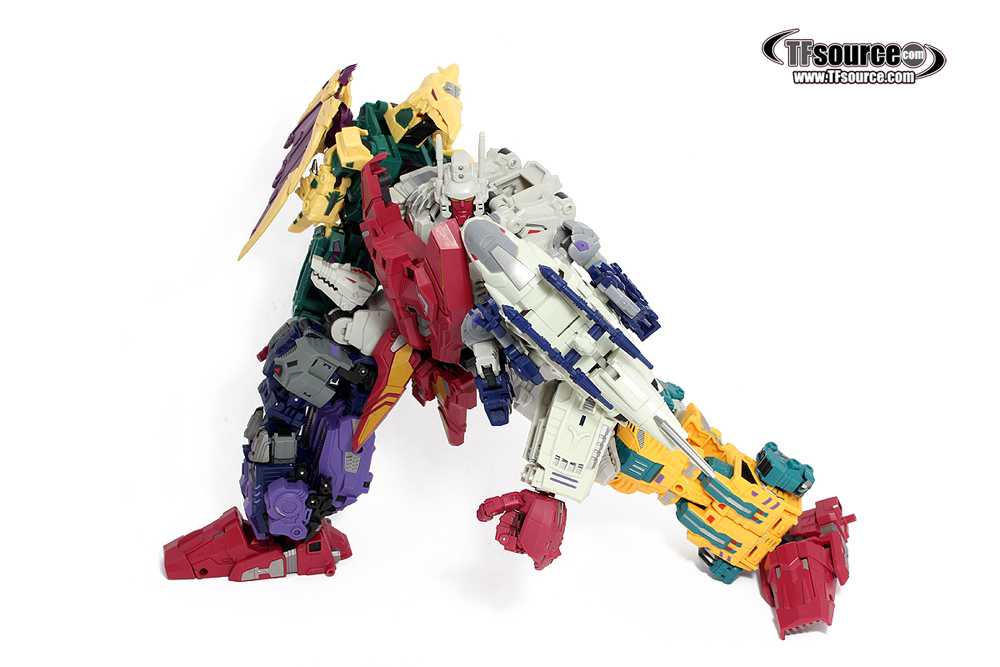 The combination itself is very simple in principle. Getting Troll and Fenrir into leg mode is straightforward, as are the combined mode operations for Alberich and Hagen as his arms. Once you know the sequence of moves, getting Siegfried into torso mode is no more difficult than any of the limbs. I did have to experiment a bit without instructions but it’s intuitive enough (for all the figures) to find the way there eventually. What I wasn’t seeing was how one of the panels that made up the breastplate folded completely in on itself before attachment to the upper torso. What made it a difficult procedure for me was actually pegging the legs into Troll and Fenrir. It was immensely resistant with no visible switches or buttons, and getting them out seemed to involve brute strength, which disfigured one of the tabs on Siegfried’s leg where it clips into the Fenrir port. I just got the feeling I was doing it wrong, but no better solution presented itself. Upon separation and re-combination, the resistance was less but still nowhere near as fluid as the connection for the arms to the torso. 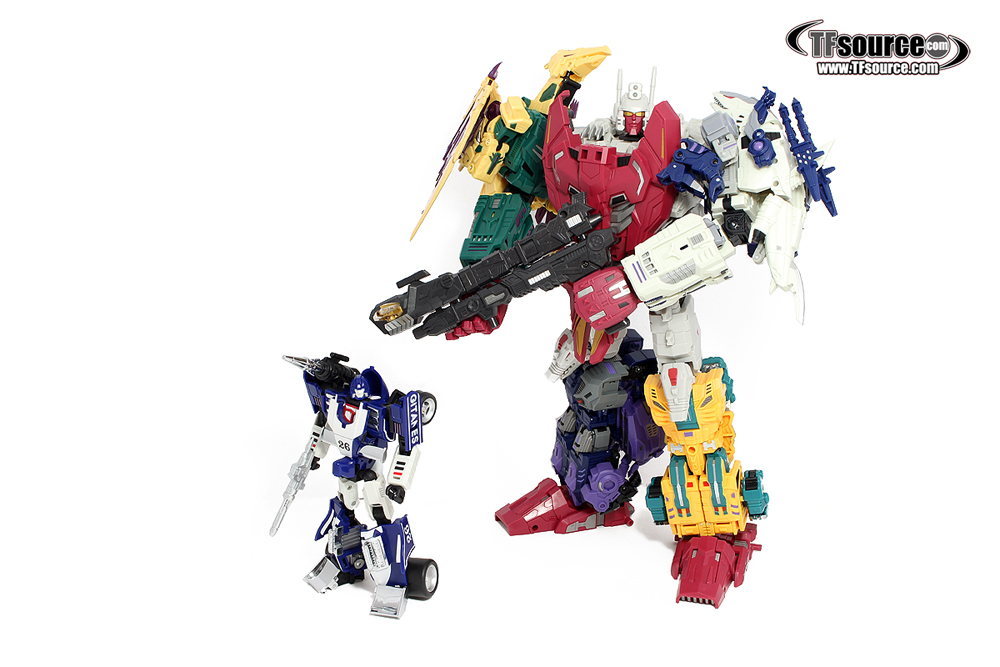 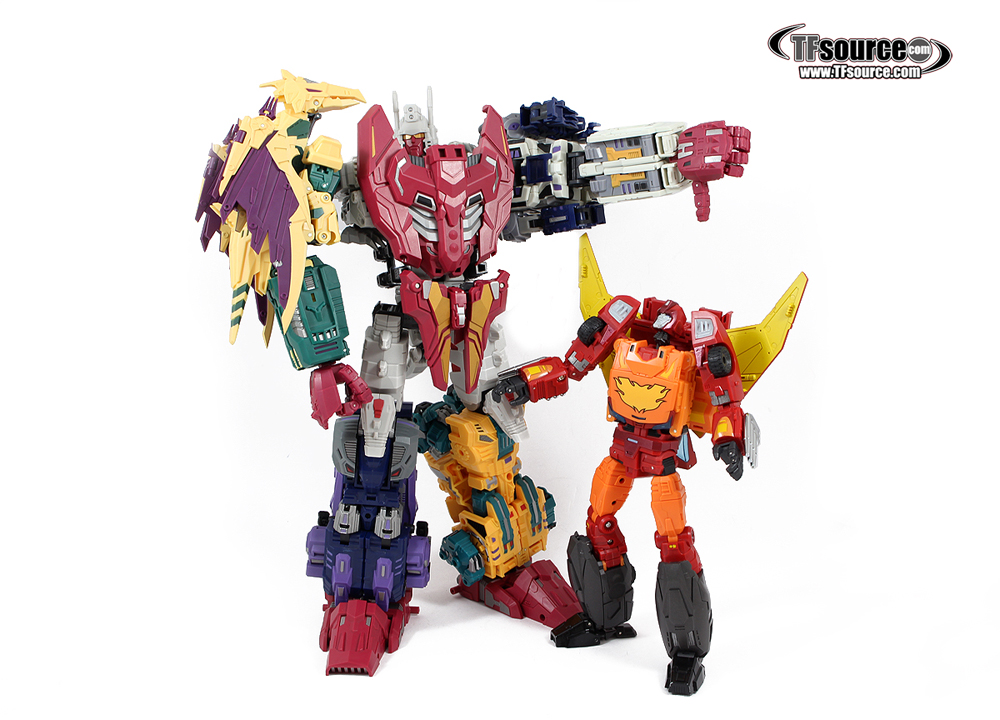 Once combined, stability is good and you can adjust the arms without disfiguring or completely unbalancing the beast. Those limbs are not coming off in a hurry. There is a lot of expression in him too helped by those glorious ball-jointed fingers of his and the ability to hold his gun with both hands. Adding swords to the gun barrel creates a huge crossbow, and that’s how UT shipped the thing to me so it’s obviously an intended configuration. The double-barreled guns that attach to the combiner waist fall out quite easily on my specimen, so beware of those. There is very cool ball-jointed articulation for both halves of the waist piece meaning they do not provide too much of an obstruction to the posing. 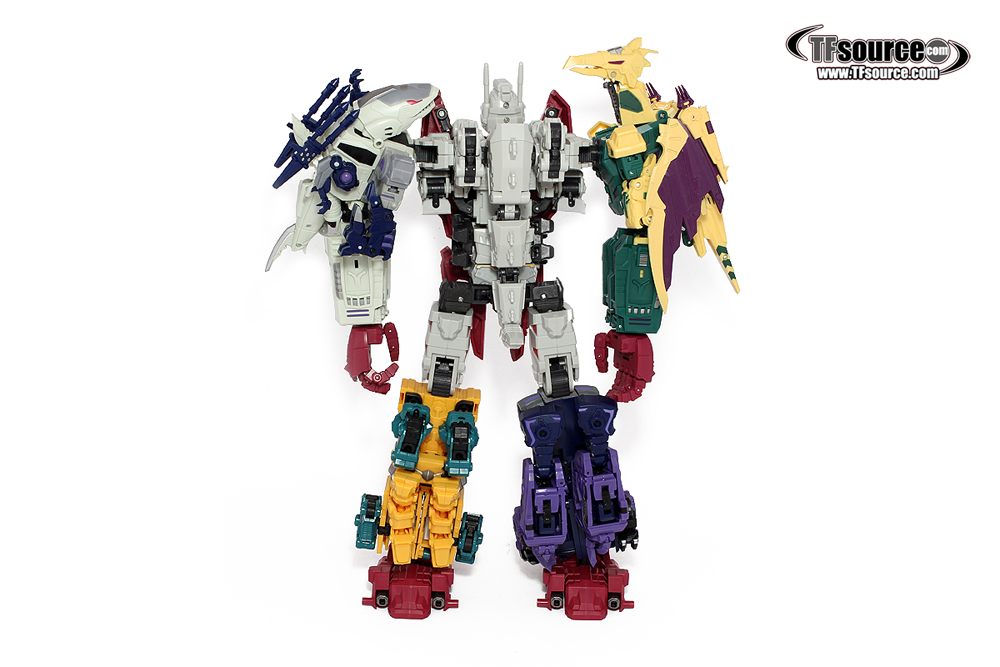 Knee ratchets and shoulder ratchets are seriously solid and robust, tight enough to support him, but the waist where the thighs connect to the crotch are not strong enough for the wilder poses. I have had his top half do a complete 180 where the legs AND the head touch the ground at the same time more than once! Being mindful of the weight distribution will mean you avoid situations like that. I also think Ordin would have benefited in terms of posability and stability  from some forward and backward articulation in the ankles instead of just side to side. 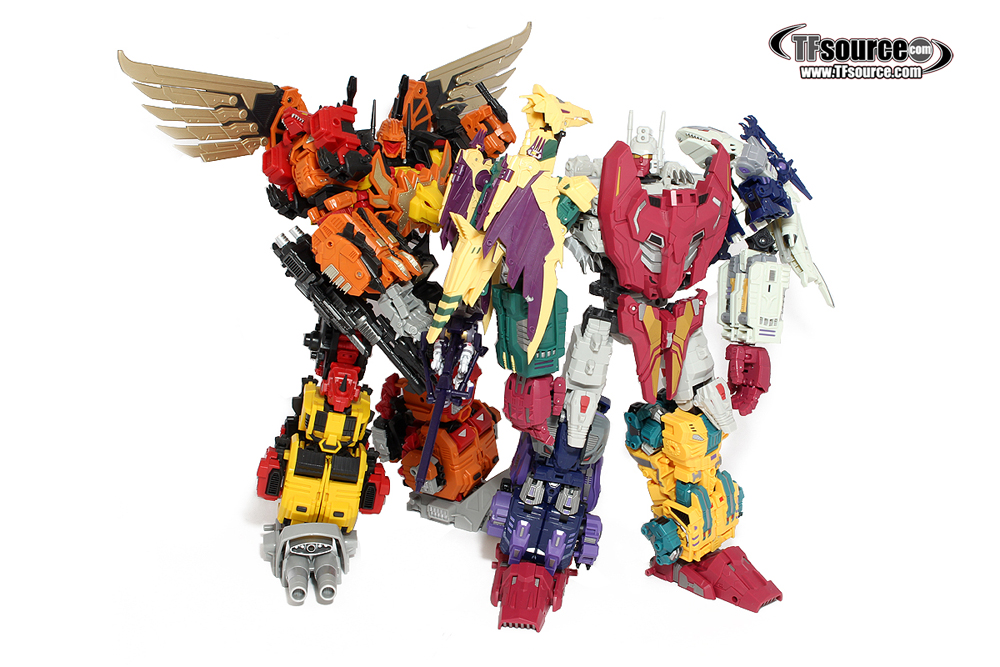 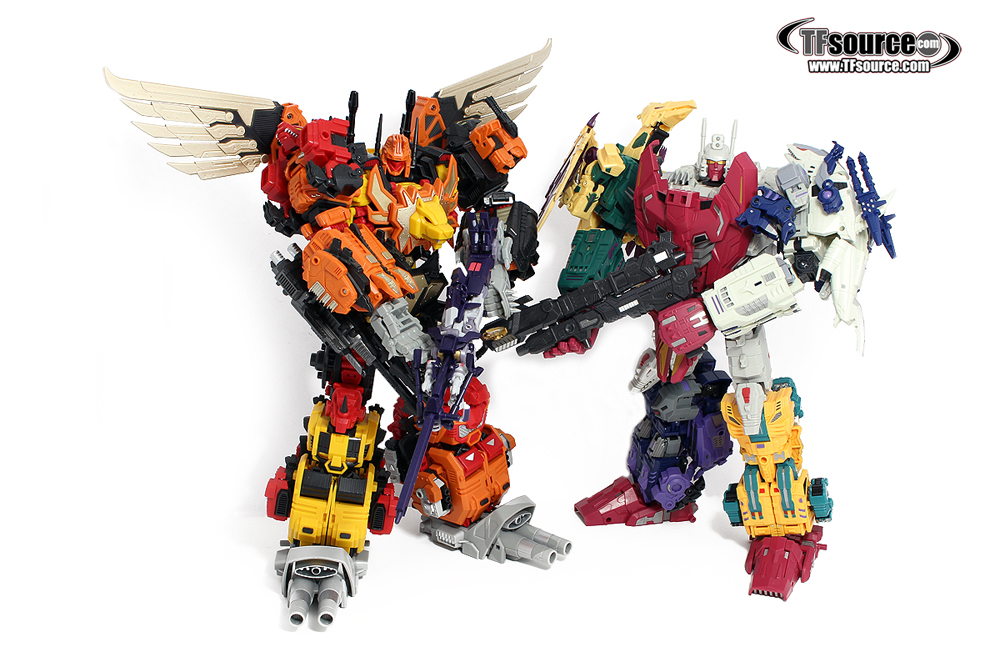 In terms of his size, he compares very well to Feral Rex even if he’s a shade shorter. Even with Masterpiece Autobot cars I think he works, but Masterpiece Ultra Magnus comes up to his chest (Magnus’s shoulder towers come up to Ordin’s shoulders) so I’m pretty sure it has not been aimed at Masterpiece display. It just happens to work with some of them. One other thing I noticed about Ordin was that the antennae on the large robot head slipped back down after a few occasions of extending them up. I had to extend them and twist them or point them outwards a bit to find enough friction so they’d hold. If that friction disappears over time, as insignificant as it may seem, it’s a display compromise I do not wish to experience. He needs the taller antennae in my opinion. The combiner head is of course based off the toy, and not the cartoon style purple helmet and silver face. He also cannot have Blot/Troll as an arm, and I know for a fact this annoys some collectors.

Let me say this, though. Ordin is phenomenally beautiful. I love how if you pose him in an idle stance he will just stand once placed on a surface. I think if they tighten that waist for mass release this will be more highly thought of than Feral Rex as a combiner by almost all. Already a number of his features are stronger in terms of weight distribution, stability and possibly even proportions. The individual bots are weaker to a man than Feralcons, but Ordin’s combined mode is where it’s at for this figure. I haven’t been able to stop looking at him for the last week and a half, such imposing quality and good build throughout. He cannot pull off my signature running pose or achieve a proper kneel, he can’t look up too high without adjusting the panel the head sits on, but he does have good weapon grip, sensational looks, a relatively simple combination that won’t take you an hour and he’s made me actually care about Terrorcons. Abominus is suddenly a big thing in my collection. Sort the lack of waist tightness, sort the friction in the antennae, sort the difficulty disconnecting Fenrir and Troll from the legs and this thing is perfect. Even if they don’t correct these issues for release, I’m still thrilled with it. Also, he has a tail. 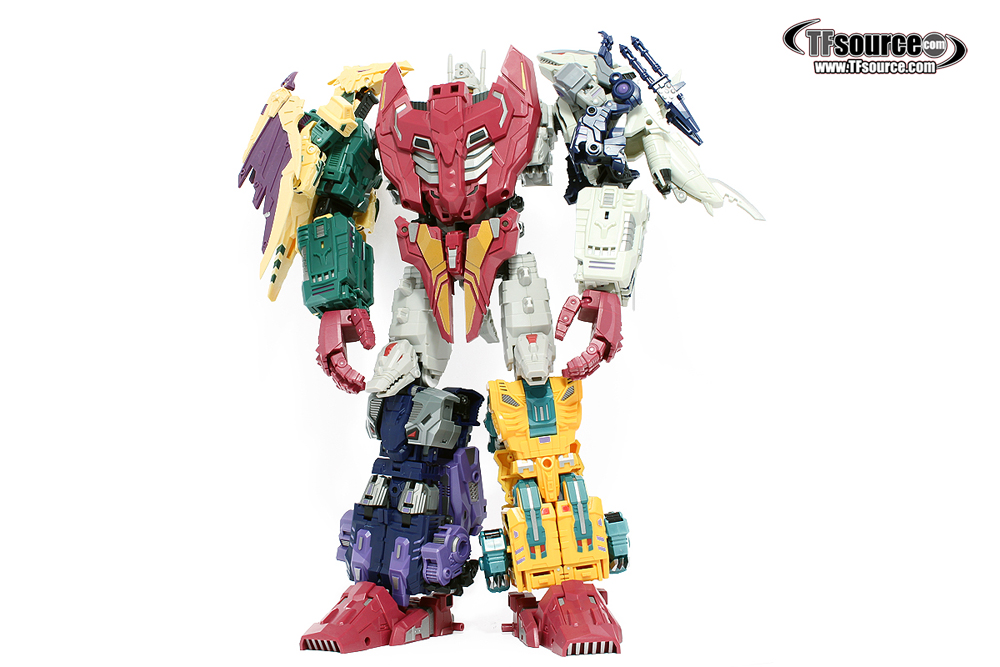