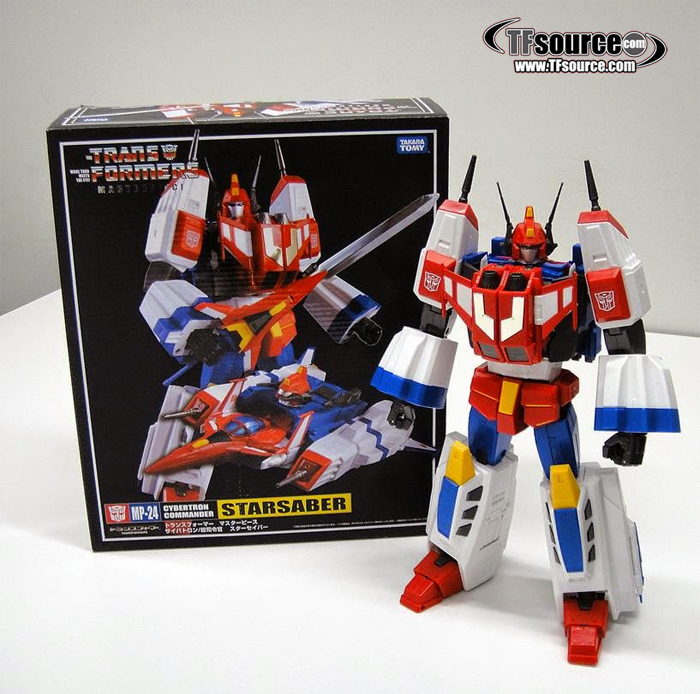 Right, we’ve looked at what has been released in the Transformers Masterpiece range over the last year and a bit in Part 1 and Part 2, now – with one notable exception that cannot be mentioned – we are going to have a look at what’s coming next. Masterpiece fan poll winner MP-24 Star Saber, MP-21G Bumble G2 version and MP-25 Tracks take the spotlight this week, proving that if 2014 demonstrated a run of strong form for Masterpiece, 2015 is going to consolidate and excel. 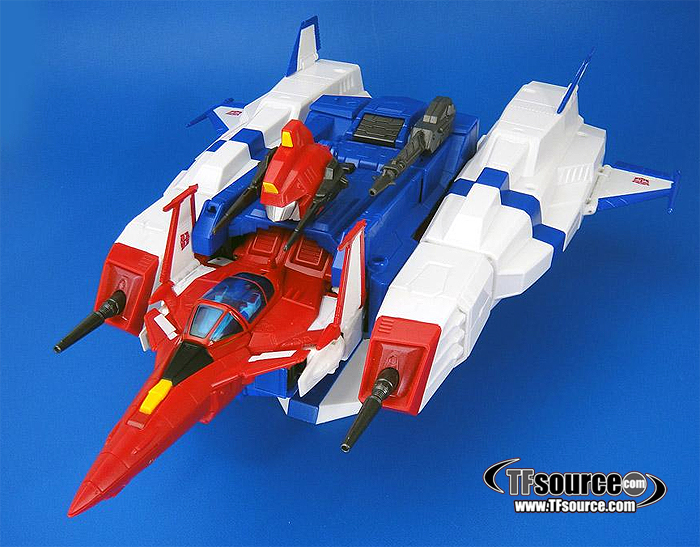 For those who were eligible to vote in the Masterpiece Fans’ Poll, MP-24 could have been Star Saber, Super Ginrai, Fortress Maximus, Dai Atlas, Convoy (Beast Wars), Lio Convoy, Big Convoy, Super Fire Convoy, Micron Convoy, Grand Convoy or Galaxy Convoy. The galaxy’s greatest swordsman won, and the Seibertron leader from TF Victory was designated an official Takara Tomy Masterpiece number. This delighted some fans, while other quarters were heard saying things like “I have no connection to this character, easy pass” or “Why can’t Takara just focus on giving us the season 1 and 2 cast before tackling later series”. 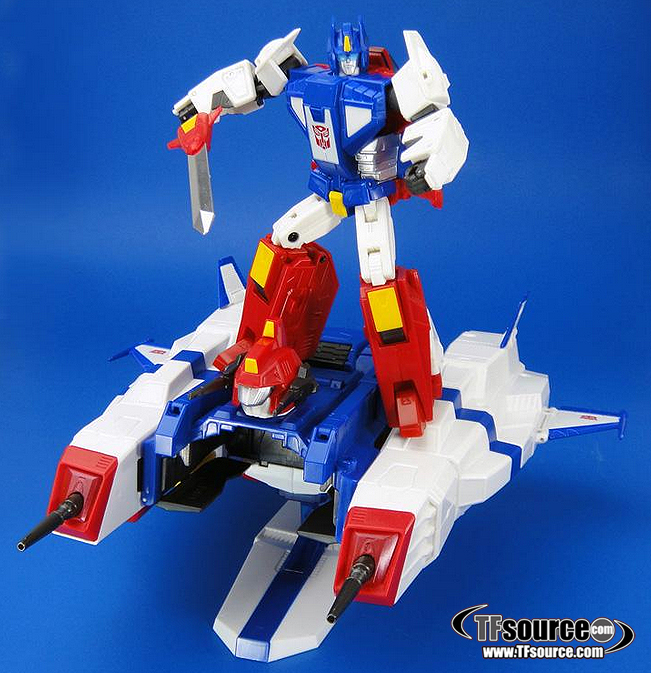 Fair points, but Takara Tomy are flexing their muscles and their Masterpiece treatment of the Supreme Commander Star Saber has been accompanied by a wonderfully paced series of teaser images posted on Twitter by MP-24 lead designer “TFYuki” throughout this item’s production and evolution. I appreciated what they were doing and was fascinated by what they could produce, knowing the original G1 Star Saber was much loved but something of an immobile brick. I do find myself in the camp where Takara Tomy’s ability to bring the G1 screen characters to life has influenced what I believe what Masterpiece ought to be about, but this isn’t that far away from the new post MP-10 concept. 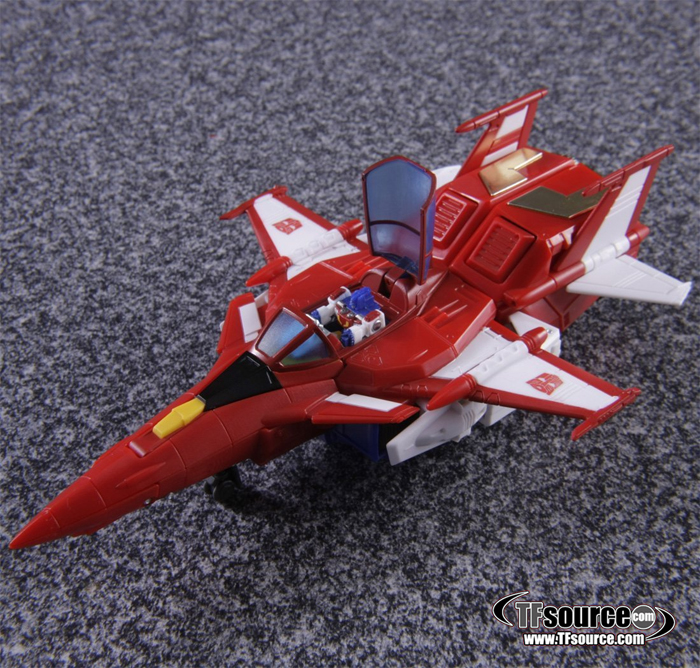 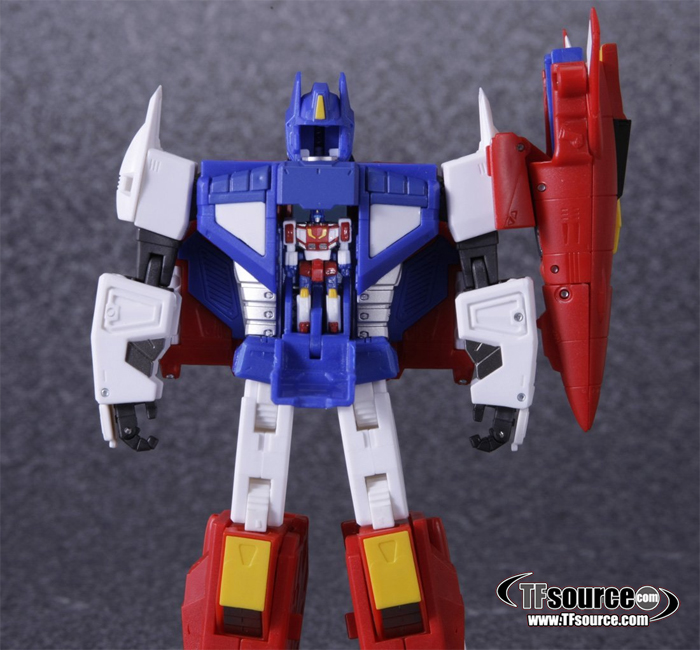 This is, after all, a screen accurate character, another cartoon legend brought to life. Just not a cartoon that most of the Western Transformers collecting world was all that familiar with, hence the slight hesitance in understanding why this thing had to be made. The whole point of this article series was to demonstrate how no matter what Takara Tomy have taken on for Masterpiece in the 2014/15 period, it has been a wonderful success. G2 Lambor, Soundblaster & Ratbat, Silverstreak, Wheeljack, Bumble, Ultra Magnus and Skywarp have all been superb, however apprehensive I was about pre-release imagery. I have decided to keep faith with Takara Tomy here and throw my lot in with Star Saber, I’m totally on board and counting the hours until release. Battle Up! 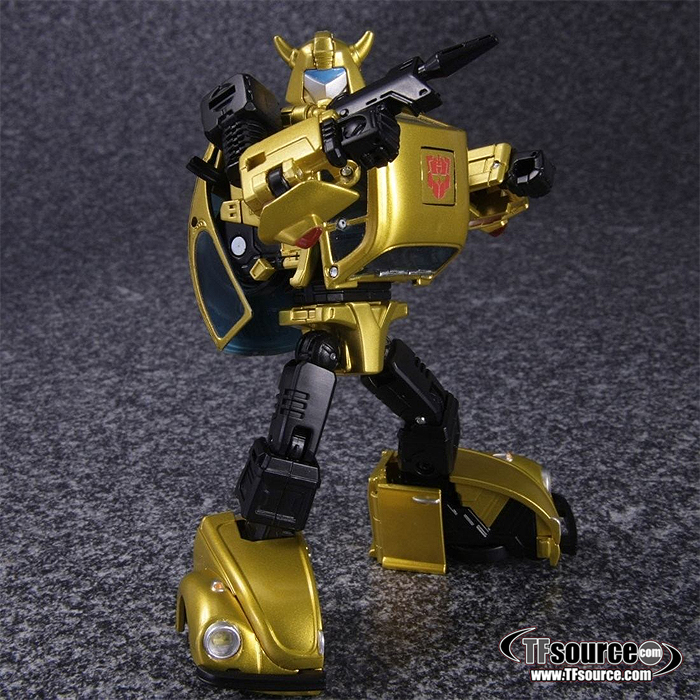 When Masterpiece Bumble was announced, and post release when the general consensus was that MP-21 was a roaring success, repaints were inevitable. The choices for a Bumblebee repaint are endless, depending on how far out you are willing to go. There is the standard Takara and Hasbro vintage G1 Bumblebee in red, there is Micro Change Series blue, Mexican variant blue, white and silver, Brazilian variant silver, orange etc, E-Hobby Bug Bite white…but what has been announced first is MP-21G Bumble G2 Version. 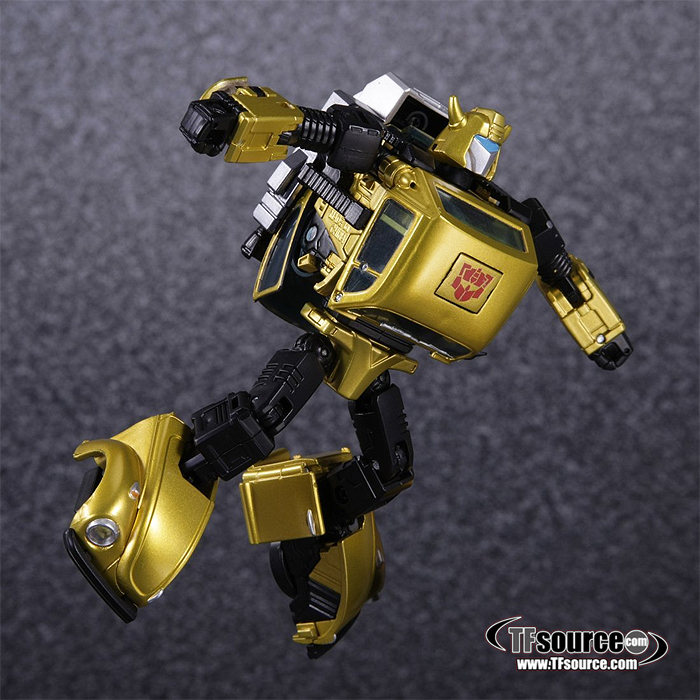 No Spike, but a jetpack instead

A gold bug, but not Goldbug. We shouldn’t be too surprised at this release as we did get a G2 Sideswipe, but that arguably was different and attractive enough to warrant its own release. It’s possible that some will see G2 Bumblebee in gold as not different enough to the orangey-yellow of the standard MP Bumble. This release comes with the battle mask as standard, along with two other unmasked faces and a jetpack. The lack of the Spike in exosuit might explain the relatively low price point for MP-21G. That, and the fact that the mould in general is pretty titchy. 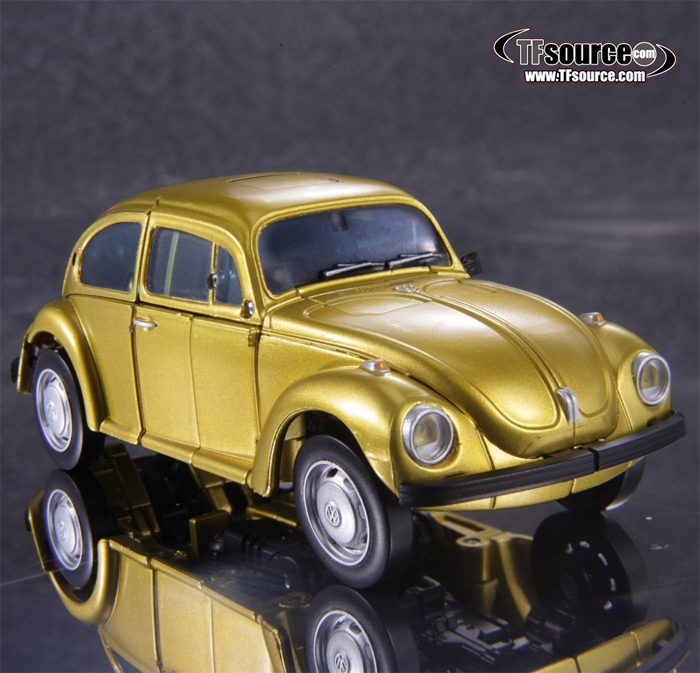 Whatever the colour scheme or reference, it’s going to be an excellent Transformer because Masterpiece Bumblebee is a complete wonder. Minibot enthusiasts may enjoy the deco in addition to the normal release more than most of us, but then I ordered this on first sight. There are incentives, the backpack might be fun when attached to the normal Bumblebee MP, and those who didn’t get the Amazon battle mask (a great unintentional phrase already) will get it included with G2 Bee. The flipping chest/roof flap will reveal a G2 Autobot symbol. Cynically, I suppose, those who don’t want to cause wear to their screen accurate G1 Masterpiece Bumble can transform this one to death. MP-21G Bumble G2 version, the definition of cheap thrills. Cheap, and thrilling. 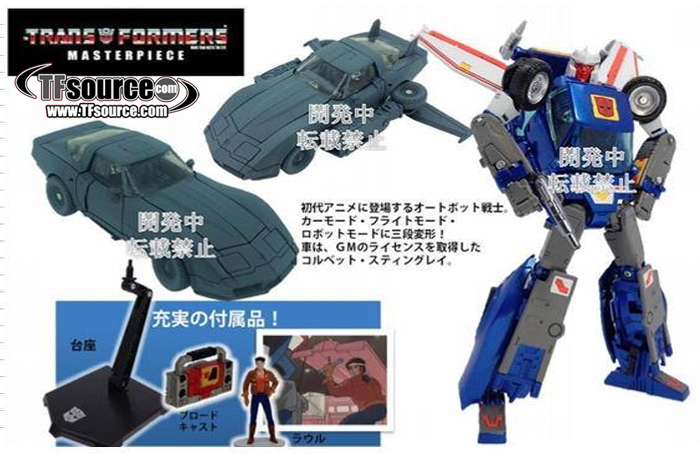 Other than He-Who-Cannot-Be-Named, MP-25 Tracks is possibly the most exciting thing to be announced since MP-20 Wheeljack. While I have fallen head over heels in love with Bumblebee and Ultra Magnus, those were in-hand affairs. With items like Tracks, Wheeljack and its repaint, it was love at first sight. With repaint potential off the scale and undoubtedly bound to arouse desire, Masterpiece Tracks is already a hit. 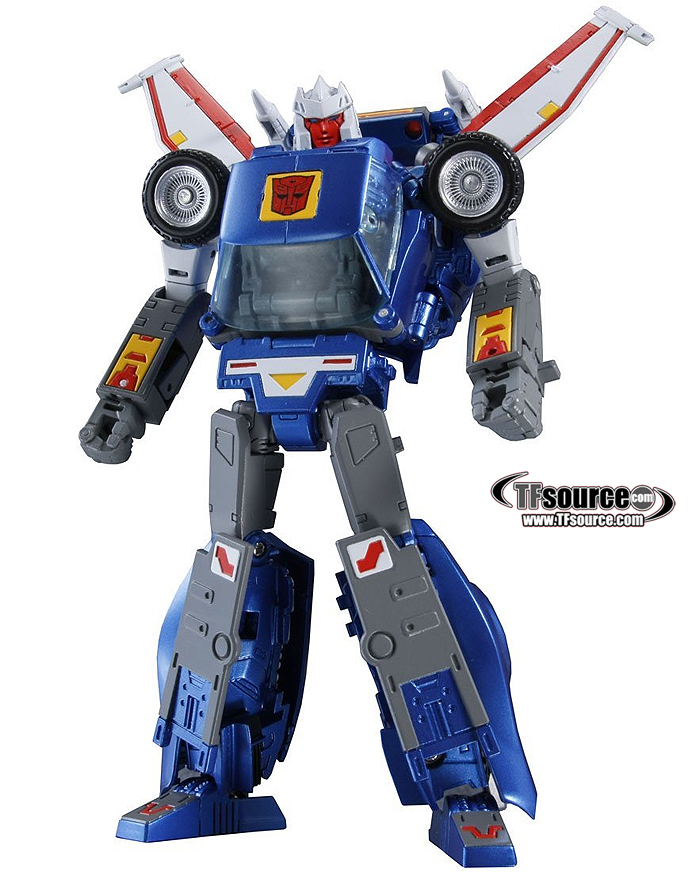 Look at that head sculpt, that utterly gorgeous snobby face of his. The deep and vivid blue of the Corvette Stingray chassis contains every drop of allure the original did and this hi-res image allows the originally odd-looking paint application on the waist to shine and justify itself. Cartoon accurate yellow patches (especially the chest symbol) cement Tracks as a true disciple of the New Masterpiece ethos. Perhaps the only hard thing for me to accept are the tiny rocket launchers, especially as they were such a huge part of the original G1 toy’s silhouette. I am hoping Amazon Japan chime in with their standard contribution and offer toy-accurate rocket launchers as an extra in addition to a toy accurate battle mask. Looking at Wheeljack though, the toy accurate launchers were reserved for a different release and never made available with MP-20. 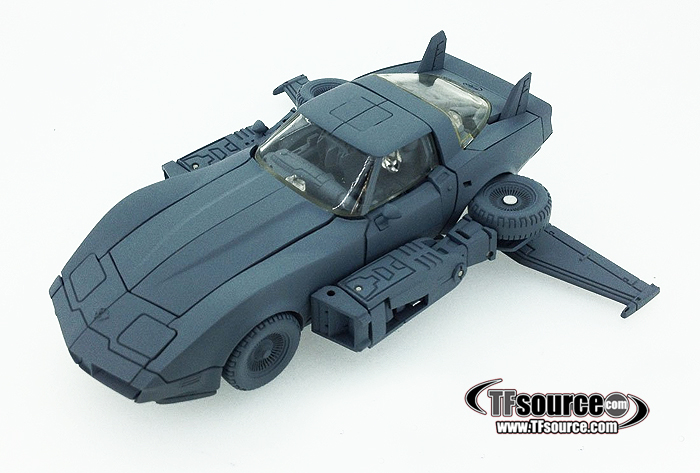 Tracks retains his triplechanging nature, with a very respectable flying car mode (attack mode) incorporated into the design. It may not have the backpack and launchers as an integral part of its look, but it does have those gloriously subtle tailfins that pop up. I also like how you can’t see the retracted-but-still-exposed fists in this mode, instead they seem to have been covered by a fold-over vent which would not be out of place in real life. No official coloured images of Tracks have appeared in vehicle mode, so we are yet to see the signature flames on the hood – will they be toy or cartoon accurate? I’m almost sure they will resemble the cartoon, but would be happy with either – or even neither! 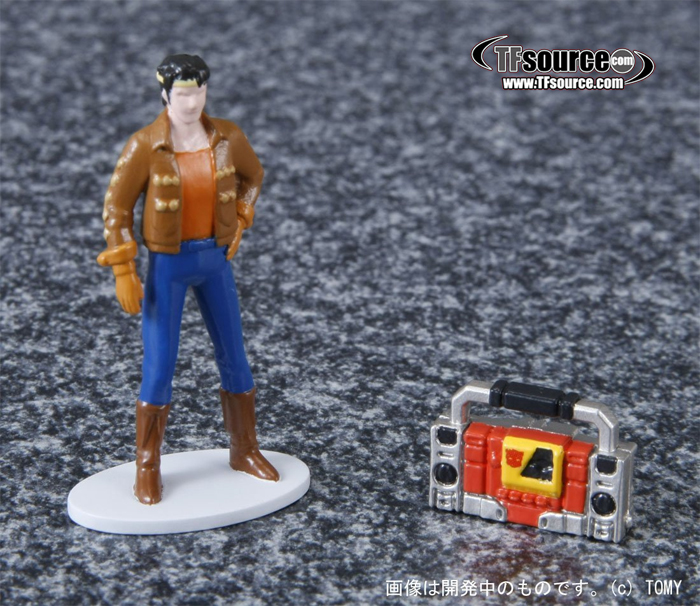 Tracks is offered at a slightly higher price than the other Car Robots due to the fact that he comes with a flight stand for attack mode. He also comes with Raoul of Making Tracks and Auto-Bop fame together with a mini Blaster accessory. It’s not what we buy these figures for, but it’s not as if they have been included and something else sacrificed, so sure, why not?

As for repaint potential, red and black Diaclone homages are almost mandatory, with reissue exclusives/prizes Road Rage and Black Tracks setting the precedent during the G1 reissue heyday. I’d be interested to know if a Road Rage repaint would come with toy-style face mask as standard with toy-accurate launchers of significantly greater stature than seen with MP-25 Tracks. Would a black MP-25 repaint have the gold face and features of the reissue or the turquoise of the Finnish Diaclone? The incredibly exciting thing is, we are going to find out. And you know it’ll be amazing, because they’ve got form. 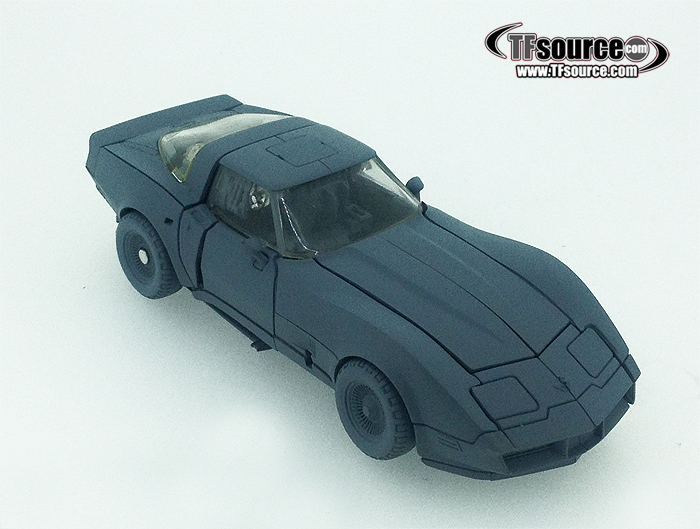