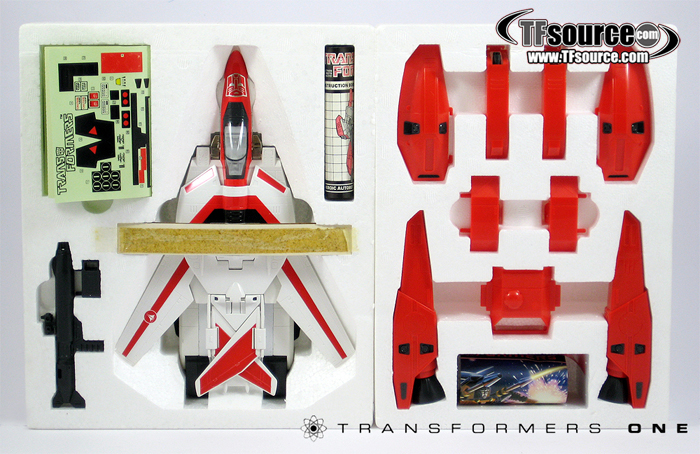 We love Transformers, that’s why upcoming product and a new year’s reveals are scrutinised, criticised or celebrated to the degree that they are. It’s impossible to compare the reaction fans and collectors – or I suppose even casual consumers – have towards new offerings by Hasbro today to how people felt about the second main wave of Transformers advertised for 1985. Imagine how wonderful that first year of 1984 was at the time (well you don’t have to, a lot of you were there). This week we’ll pretend it’s late 1984 and the 1985 catalogue of Hasbro Transformers have just been shown to an enthusiastic fan and a ‘knowledgeable’ cynic who are discussing the upcoming range. For the purposes of this article, let’s just lump Jetfire, the Dinobots and Insecticons etc firmly into 1985. Internet nitpickery hasn’t been invented yet! Many kind thanks to Paul Hitchens of The Spacebridge for the idea and inspiration this week.

“1984 saw the launch of the Transformers, such exciting robots! If you’ve seen the cartoon or read the comics by Marvel, you’ll know these robots in disguise are more than meets the eye! Optimus Prime, Megatron, Starscream, Soundwave, Bumblebee, Jazz and Wheeljack took the world by storm, and the toys even moreso. I’m looking at the catalogue of Hasbro’s Transformers figures for 1985, and I can tell you, there’s even more amazement in store for us. Insects, dinosaurs, more planes, more cars, and if that wasn’t incredible enough, we’ve got triplechanging Transformers! A combining team of construction vehicles! A motorised Transformers base! Transformers that change by themselves! I’m gonna lose my mind!!”. – Enthusiastic fan, 1984. 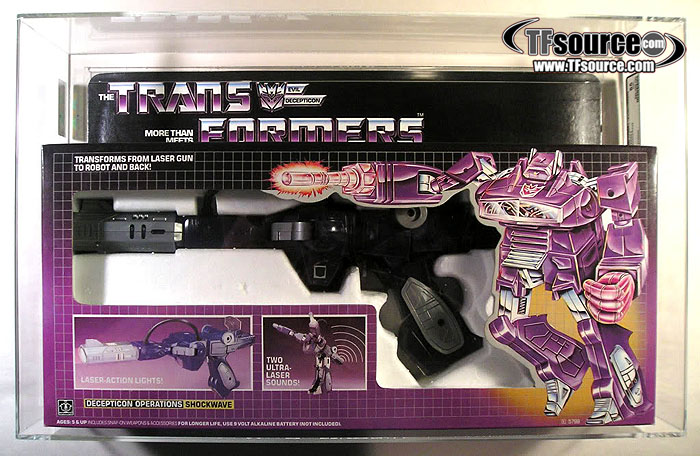 Quick! Buy and open this toy before someone puts it in a …too late.

“Only one year into Hasbro’s range of Transforming robots, the imaginatively named Autobots and Decepticons, and already we can see the well of ideas starting to run dry. A catalogue (pun intended) of repaints, the same toys as year one with new wings or a set of sirens/fenders, and an amalgamation of other moderately interesting robot toys from other companies and toy lines are evident for the discerning toy enthusiast who wants more out of their purchases than to re-enact inane cartoon sequences”. – Cynic, 1984 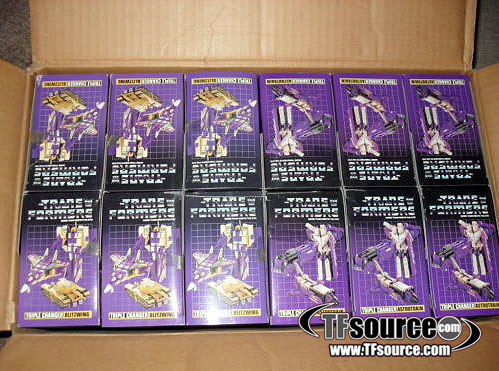 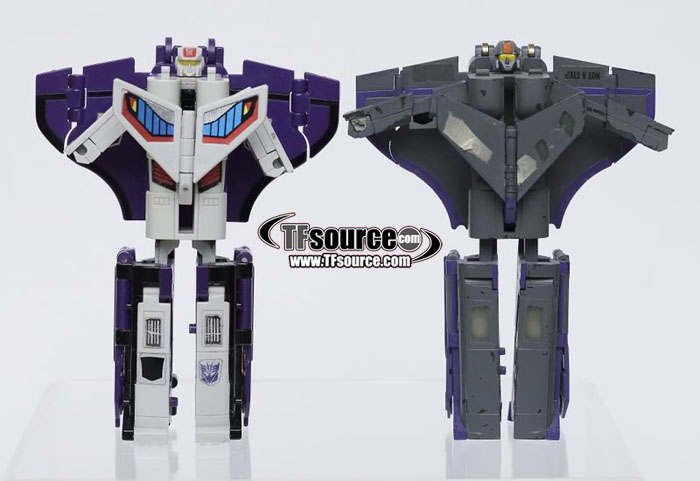 If only we could buy it in that other unused colour somehow!

“Where do they come up with this stuff? I personally cannot wait to see how those magicians at Hasbro squeeze three distinct modes into a single $12 action figure! Adding to the Decepticon ranks are Astrotrain (the clue’s in the name, kids!) and Blitzwing, elite Decepticons that change into two totally different vehicles each as well as a robot. We finally get a tank and space shuttle to add to the growing armada of bad guys”.

“Accepting that these are toys meant for children, and that the imagination is a powerful thing, are we to expect the youth of today to believe that a space shuttle turns into a robot smaller than Lamborghini Countach? How much play value are kids supposed to get out of a shuttle that no other Transformers toy can fit into? Also, aren’t steam-powered locomotives outdated in almost every part of the civilised world? Come on, it’s the freakin’ 1980s now!” 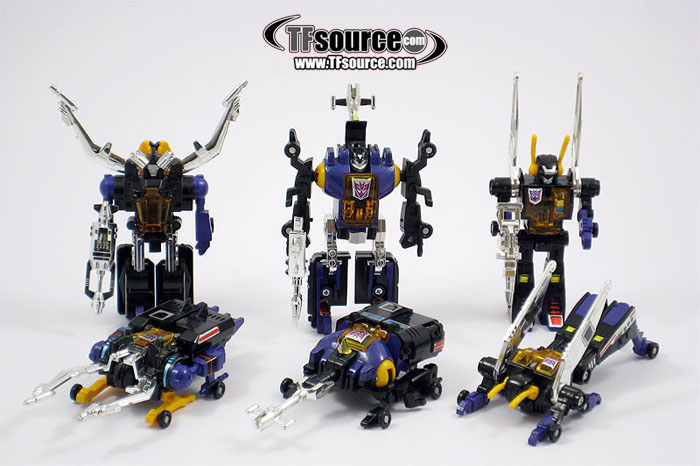 If only some of these TFs could be purchased anew…

“If you thought a transforming truck trailer, Walther P38 firearm and boombox were the height of ingenuity in children’s toys, 1985 will be a year to remember. If a team of robotic insects weren’t wild enough, how about a group of six evil uniformly neon green and purple construction vehicles that not only turn into robots themselves, but combine, yes combine, to form a six-strong mega-robot called Devastator?! Think of the hours of enjoyment children everywhere are going to get out of this guy. Ladies and gentleman, I give you the Insecticons, and the Constructicons.”

“Oh come on, any toy aficionado worth his salt will know that Hasbro are importing Japanese toys from established lines and series en masse and re-branding them as Transformers. The lack of imagination in making what could be an amazing and historically celebrated toy line is going to be nothing more than a flash in the pan if all they are going to do is rob Japanese ideas and paint them all the same colour. At least the originals had a variety of colours! And that is to say nothing of the same old figures from 1984 being offered again alongside all the mildly changed new versions with bizarre new names. “Hoist”? Give me a break”. 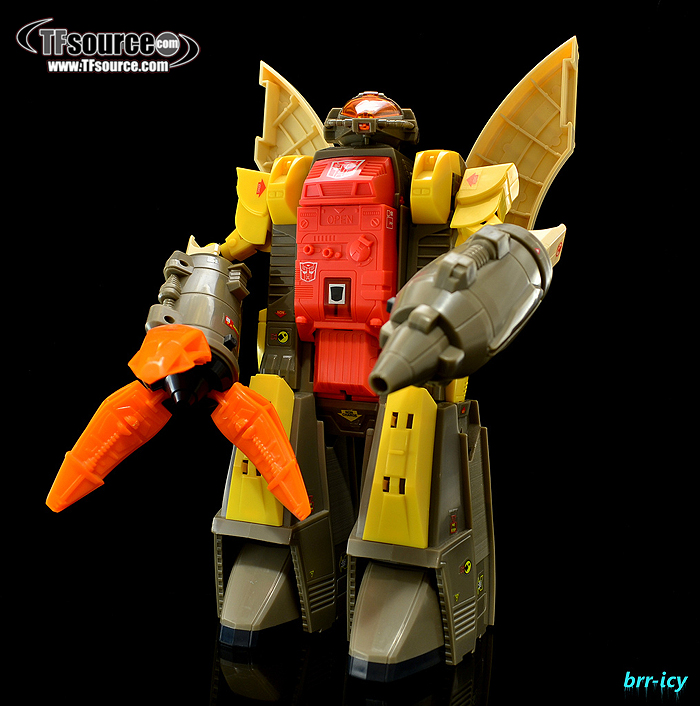 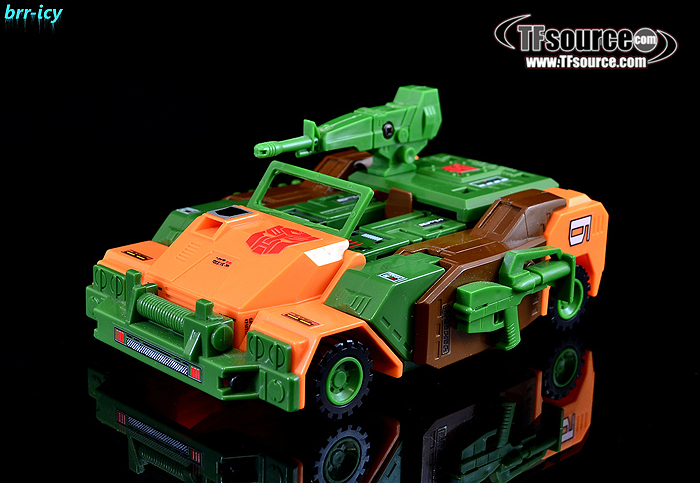 What if we got the same old characters, but with fresh designs?

“What a giant Autobot, Omega Supreme, and electronics to boot. This guy’s going to be immense. Looks like the battle’s going to move into space with the arrival of Autobot and Decepticon spacecraft. It does seem as though you have to take him apart to build the other modes, but that’s just Hasbro giving us even more variety and something for everybody. Lego fans, rejoice! But the real winner here is Jetfire, holy crap, the Autobots are taking back the sky, that thing looks unbelievably pretty and fun, so many accessories. I wonder if he’s any relation to Skyfire from the show? I wonder how much bigger Transformers are going to get?”

“What could be more cumbersome than a Transformer that doesn’t transform, but has to be completely disassembled and re-assembled? That’s cheating! They should call it a Partsformer, Lego in Disguise. As for Hasbro’s ‘Jetfire’, ‘Whirl’ and ‘Roadbuster’, not to mention their Deluxe Insecticons, they’re admitting they can’t make their own new Transformers. I have a friend in Japan and I’ve seen photos of what they sell there, guess what, Jetfire and some of these other deluxe Transformers are part of cartoons or comics in Japan and toy lines already on shelves. He tell me.” 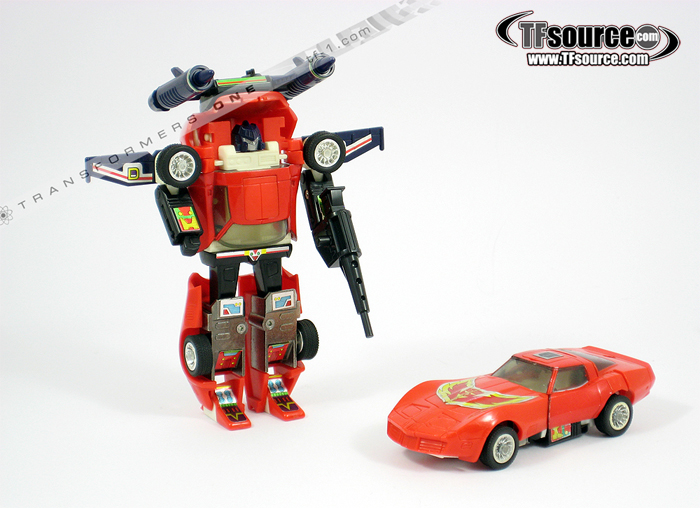 Wait, they sell Transformers in other countries too? 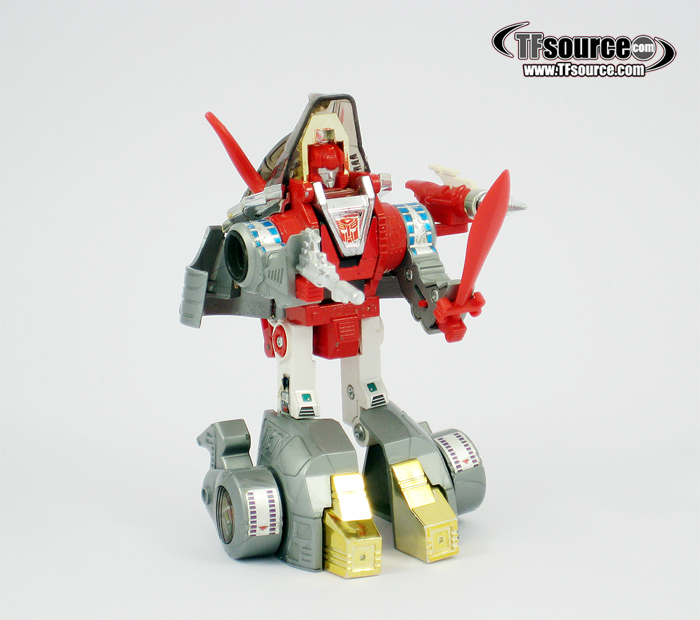 Could anyone do a better job of Dinobots than Hasbro?

“In addition to the wacky new concepts that will have parents harangued by their kids all the way to the store, some of our favourite Autobot cars and Decepticon planes will have their numbers boosted by new arrivals from Cybertron. Emergency vehicles and more minibot reinforcements bolster the Autobot army, and they even get their own Soundwave-beater in the form of ghetto Blaster! Get it? The Decepticons get more strike planes, and a truly evil looking commander, Shockwave. We definitely need more Decepticons and this lineup totally looks like it will balance the odds. Also, Dinobots!”.

“Repaints, repaints, repaints. Why not buy the exact same red Lamborghini as a fire chief. A fire chief Lamborghini, you heard correctly, to go with the two other Lamborghinis, making three Lamborghinis. Alternatively you could buy Prowl and Bluestreak (if you even found him, in the wrong colour) again in red white and blue as Smokescreen. Or how about the same planes in pretty much the same colours, but with less interesting weapons and bizarre wings? And I am sure I’ve seen that ‘Shockwave’ in Radio Shack”. 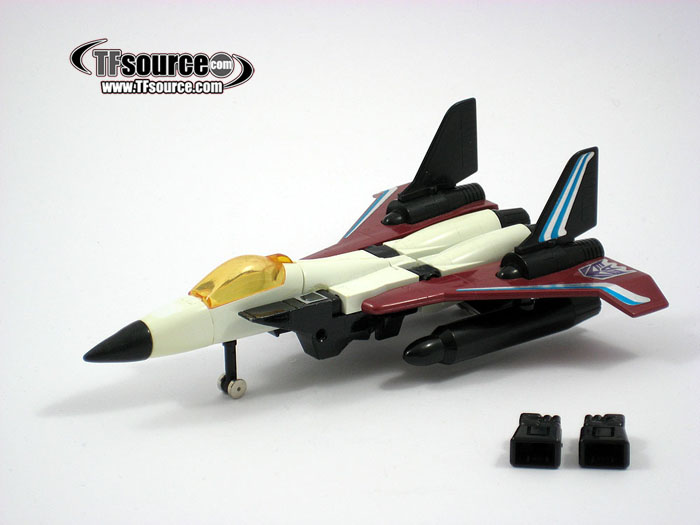 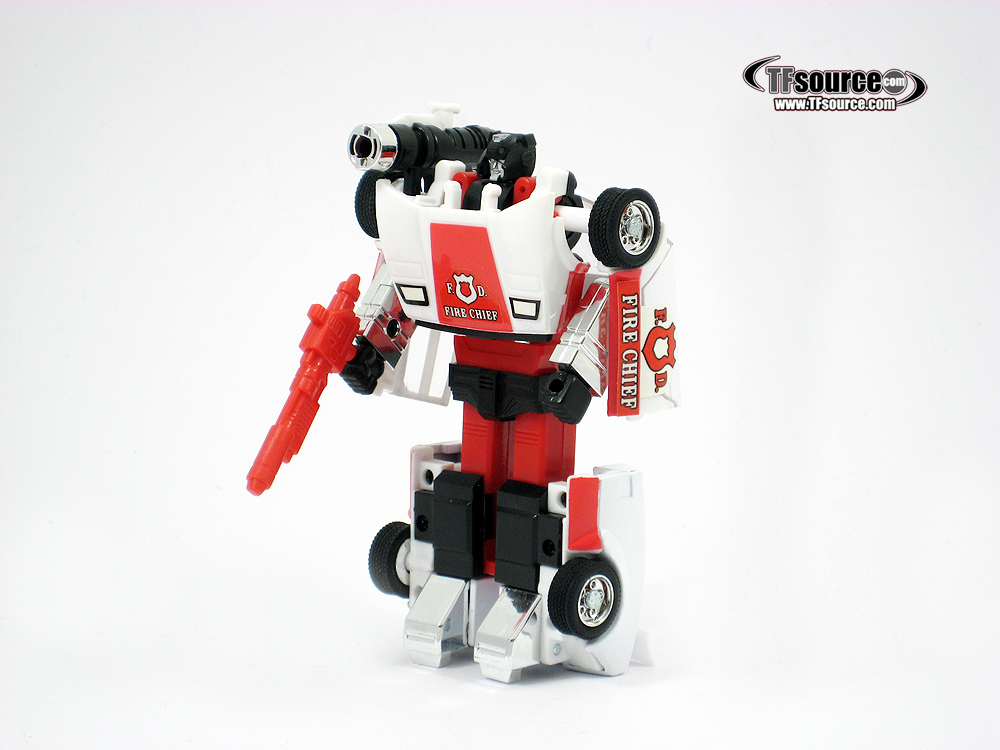 “I’ll admit the variety will add something to the Transformers range on these shores, but I don’t want to see Hasbro taking too much credit for re-badging existing toys made interesting by comics and cartoons. This new line up has very little of genuine interest for me, most of it leaves me cold. I think if I was to get one thing out of the whole line it would be Seaspray. A hovercraft mini-transformer which doesn’t come from a previous toy line, and is actually affordable. Wake me up again in 1986”.

“Excited isn’t the word, looking forward and seeing all the Transformers Hasbro has planned for us, and how they’ll fit into the cartoons and comics means that I’ll be saving my money and hoping I can get ahead of all the moms and dads at Toys ‘R’ Us to be the first to bag a Shockwave, all 6 Constructicons, Omega Supreme, and I may even get a chance to pick up a replacement Mirage after breaking my first! I’ve already seen the Dinobots in the TV show, so I know how cool they are, but it will be great to finally put Grimlock and Swoop with the other Autobots. Quality like this will put Transformers firmly on the map, establishing the brand as one of the biggest toy lines in history. Things can only get better, right?” 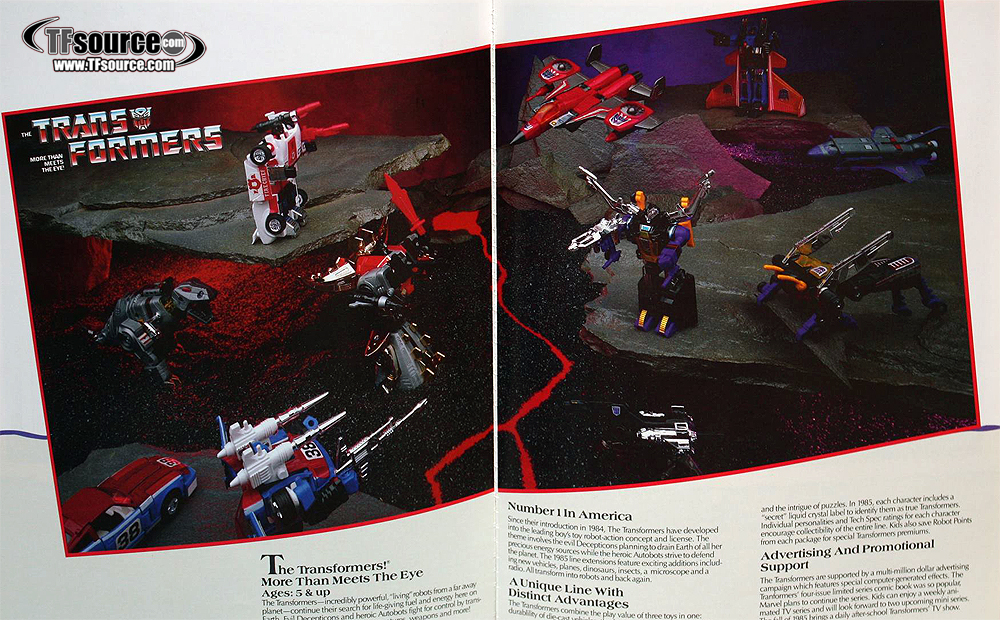 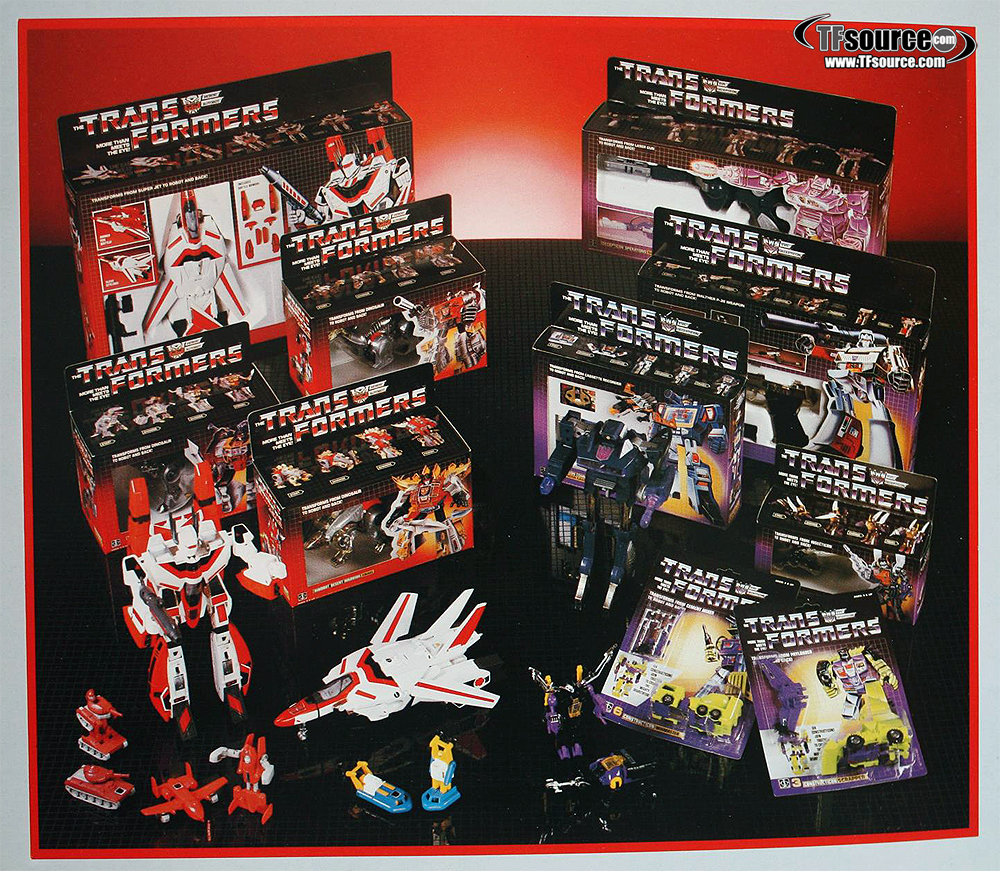 Many kind thanks to Paul Hitchens, Bryce Rutledge, Jon Krause, Ras and Benjamin Davies for most of the images used.