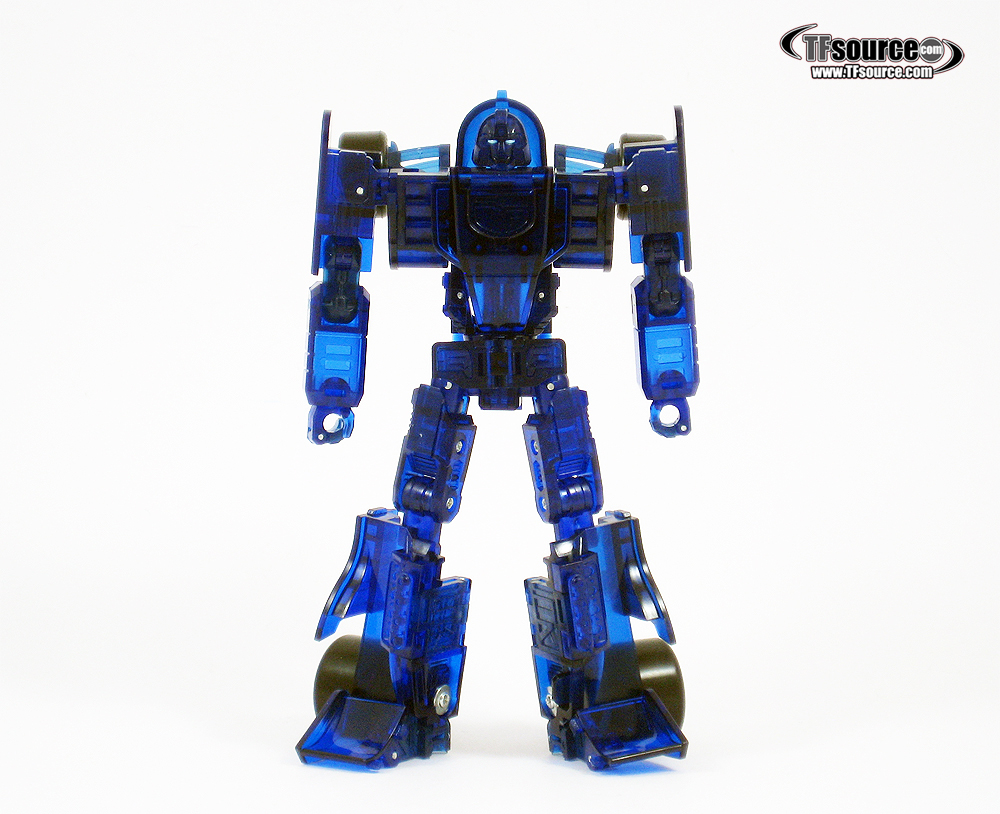 You just know that if Takara Tomy did Masterpiece Mirage, they’d put out a clear repaint as well. We’ve already had a clear blue BotCon attendee exclusive Classics Mirage, a Takara Tomy Binaltech BT-18 Rijie translucent release through e-Hobby and an all clear Henkei Mirage/Rijie, so Unique DX9 Toys’ decision to repaint D03i Invisible in clear blue should not come as a surprise to anyone. The “Phantom” version is limited to 1000 pieces and follows hot on the heels of their standard Invisible release. 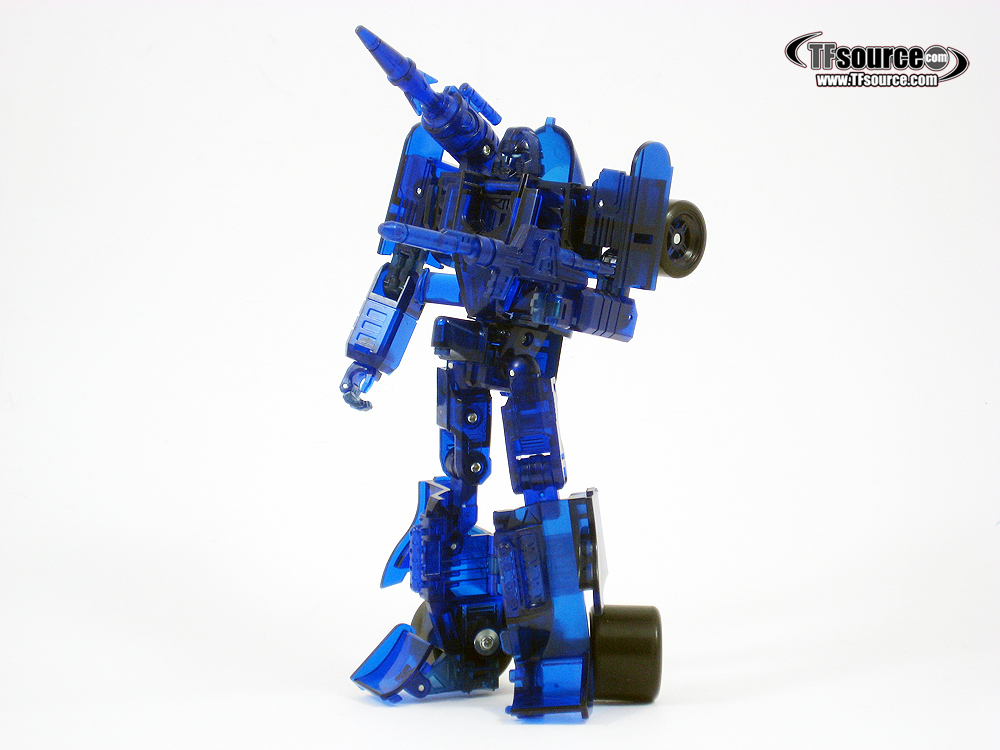 Now you see me…now you still sorta can 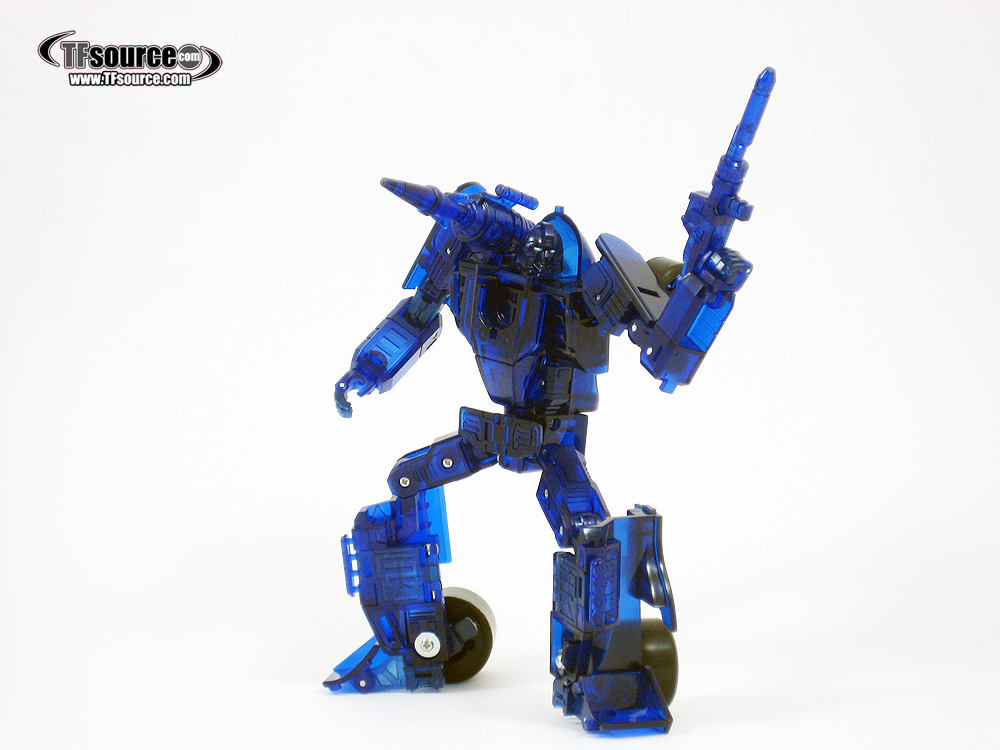 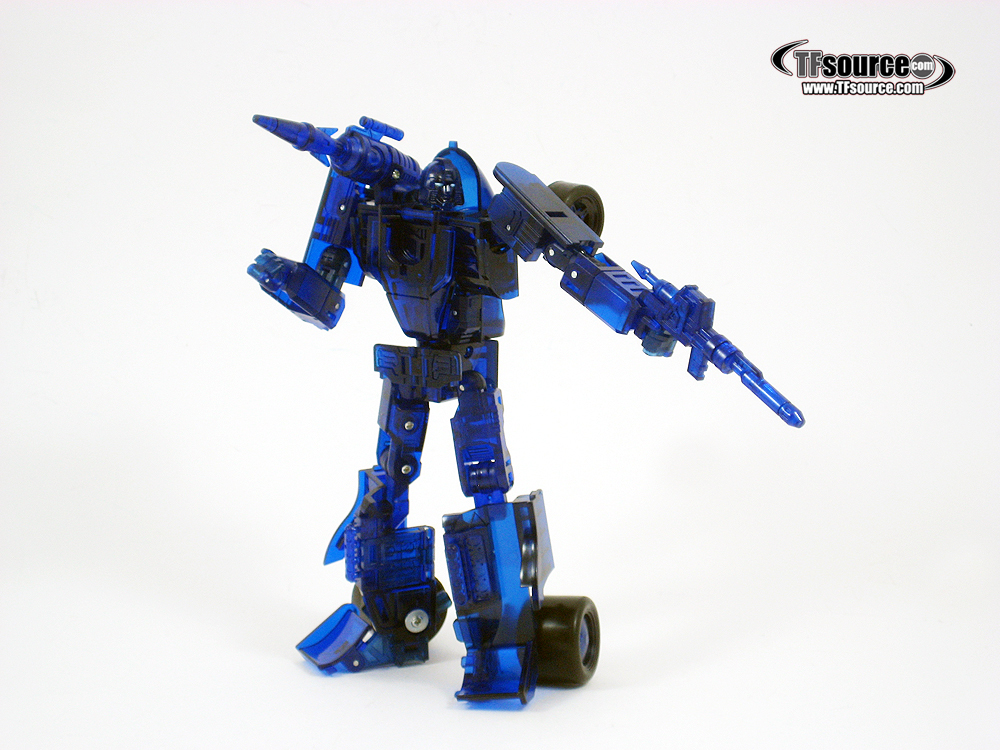 Solid stance when you know how to work the (w)heels 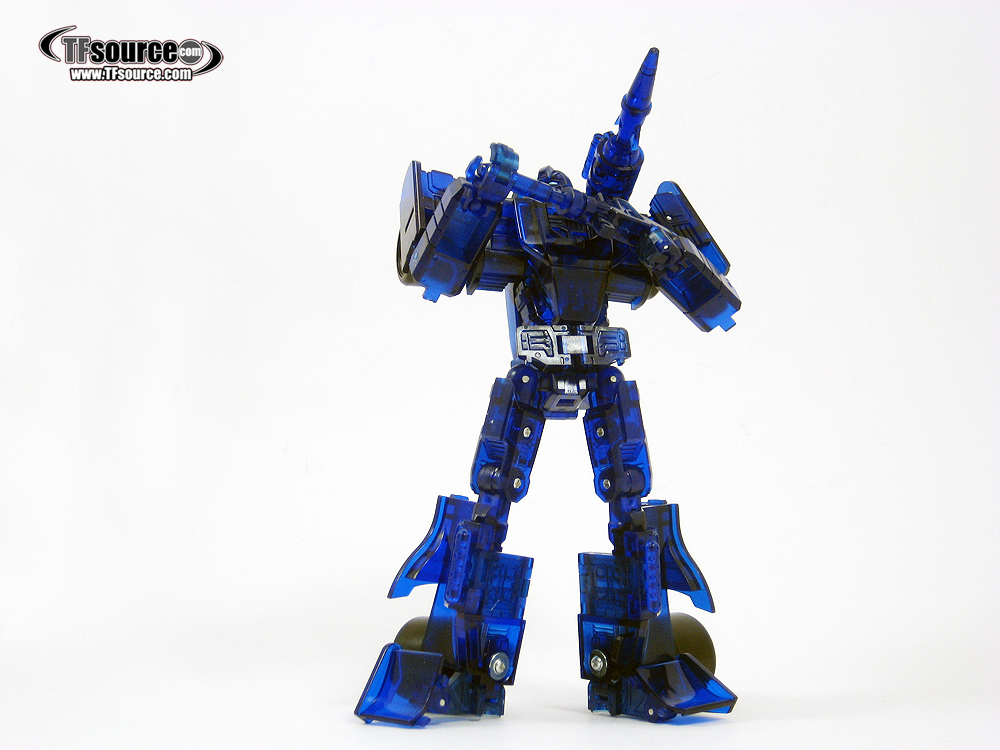 Instead of a completely clear release, DX9 have chosen to go with a very dark translucent blue and unlike the early pre-release stock imagery showing cyan coloured parts, only Phantom’s eyes show any deviation from the deep blue plastic sea that is this figure. Phantom packs exactly the same accessories as the regular Invisible release, the handgun and non-firing rocket launcher. To read the ins and outs of the base Invisible mould, check out our review of Invisible from a few weeks back. 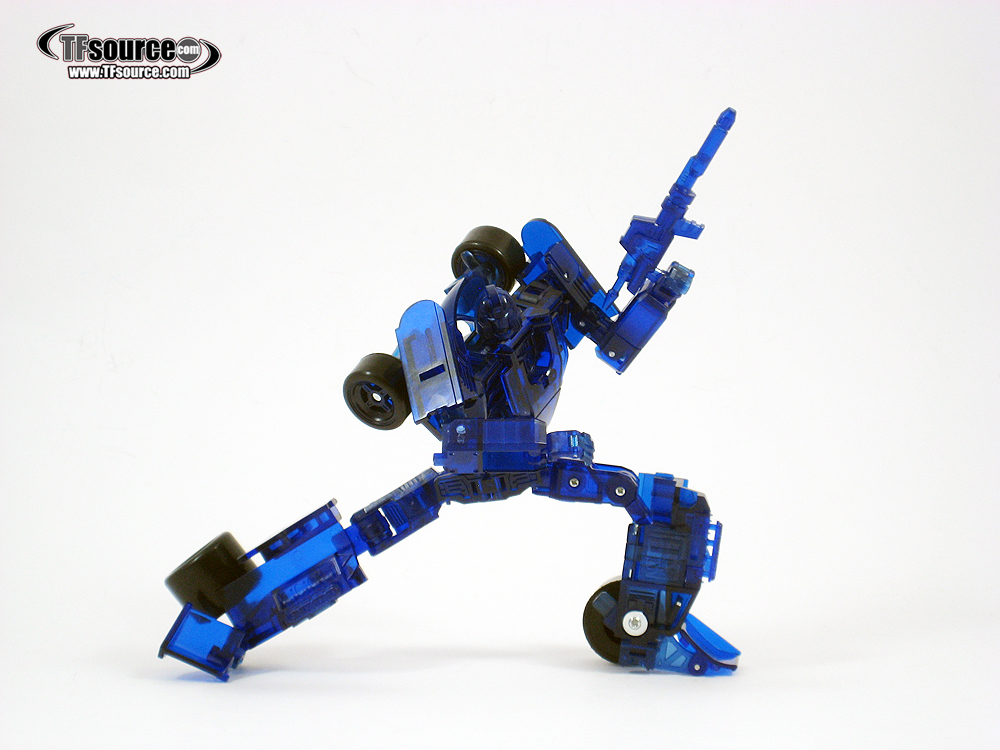 Monochrome makes him look even thinner 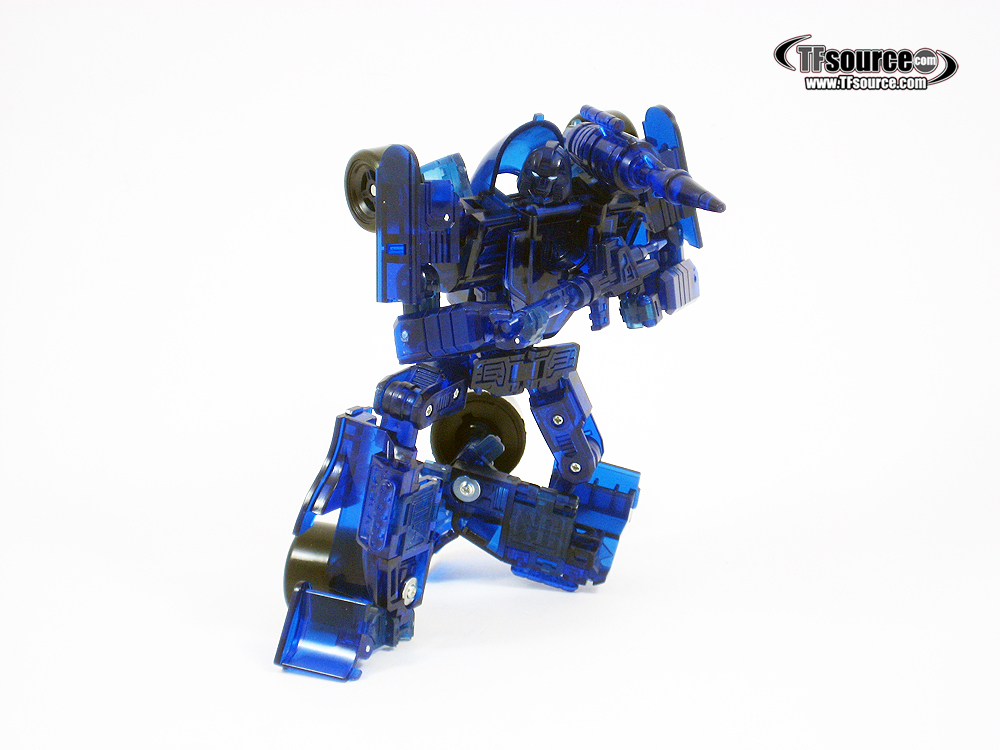 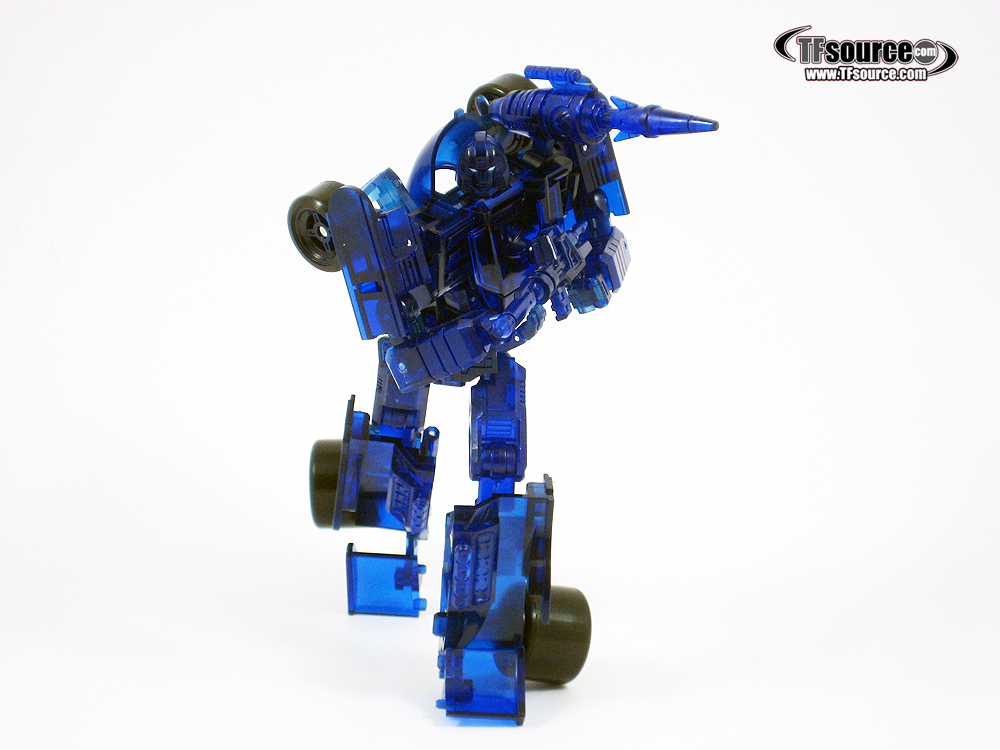 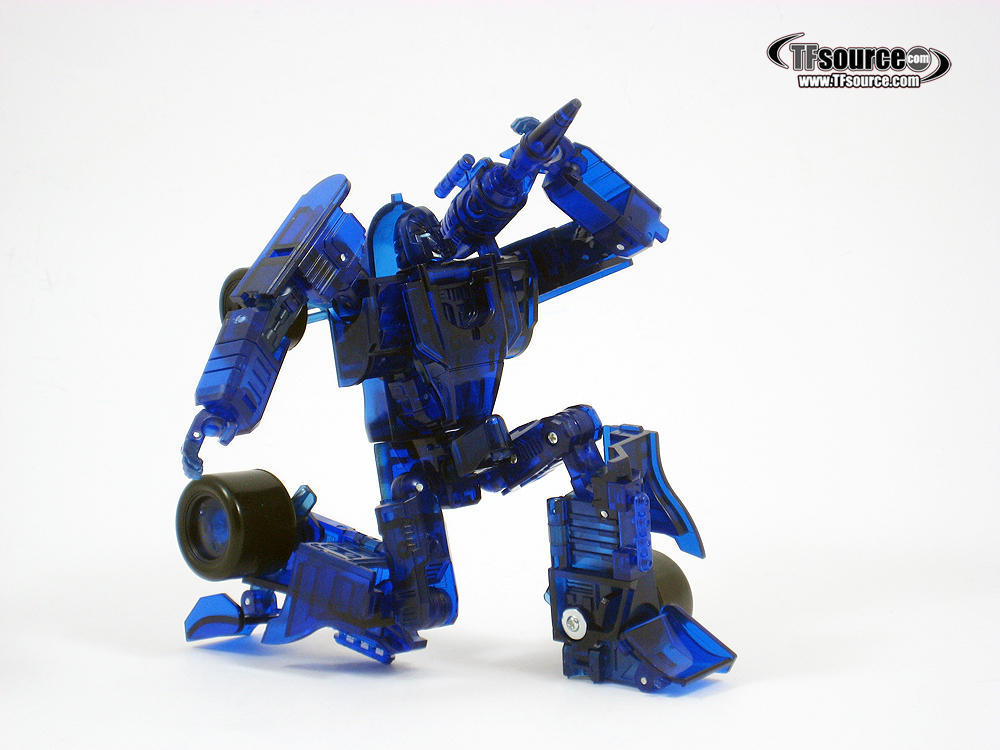 In precise order, my first impressions of Phantom were “Wow that’s beautiful”, followed by “Wow those joints are frighteningly tight”. Actually, absolutely everything is ridiculously tight and hair-raising to rotate, bend, extend, unfold or move in any way. Even turning the robot head on its pivot is very difficult. All that clear plastic rubbing against itself reminds me unnervingly of Transformers Animated Swindle’s clear shoulders and arms. We know how that normally turns out. 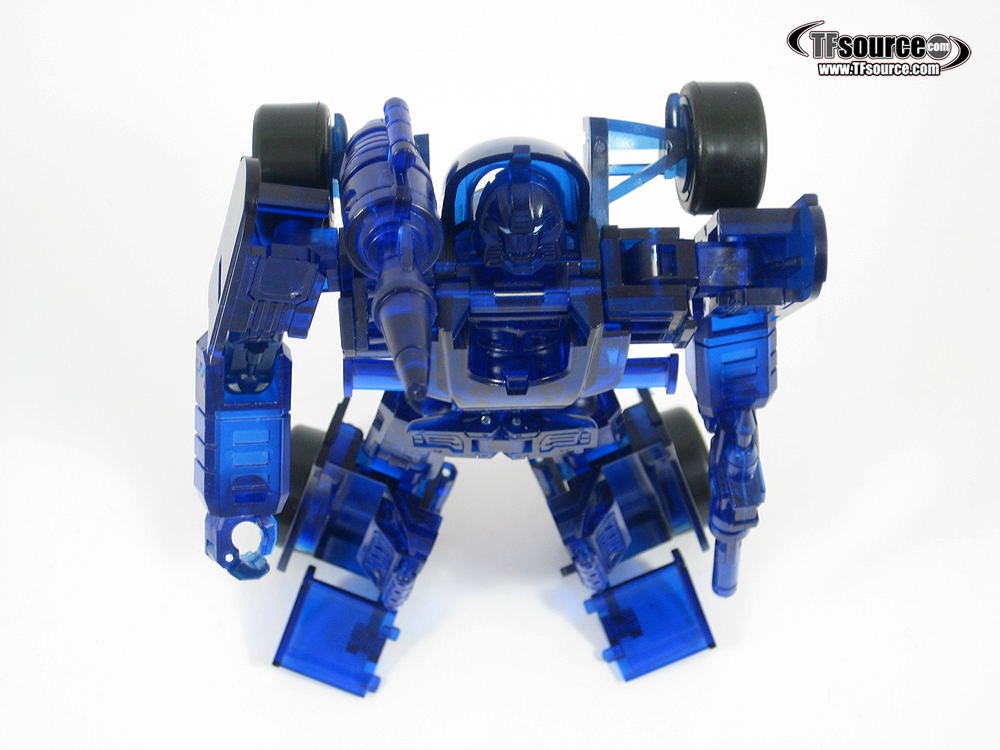 That hood is less irksome on Phantom

Using the bicep swivel and rotating the rear wheels/axles down are what worried me the most, but so far I’ve caused no damage nor seen any suspect bits of clear plastic around the place. What was happening was that the rear wheels, which clip into a small flat rotating piece connected to the chassis itself, popped out a few times because of how tight everything is. Thanks to my experience with the standard Invisible figure and now having handled this a few times, this is no longer an issue. 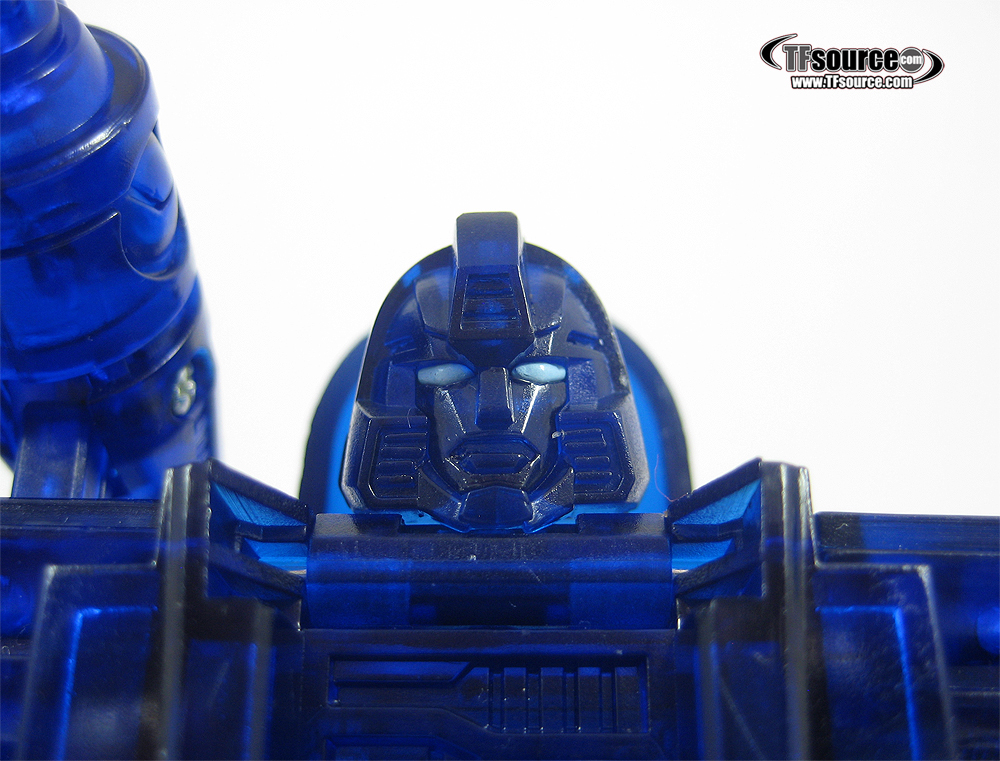 No loss of definition 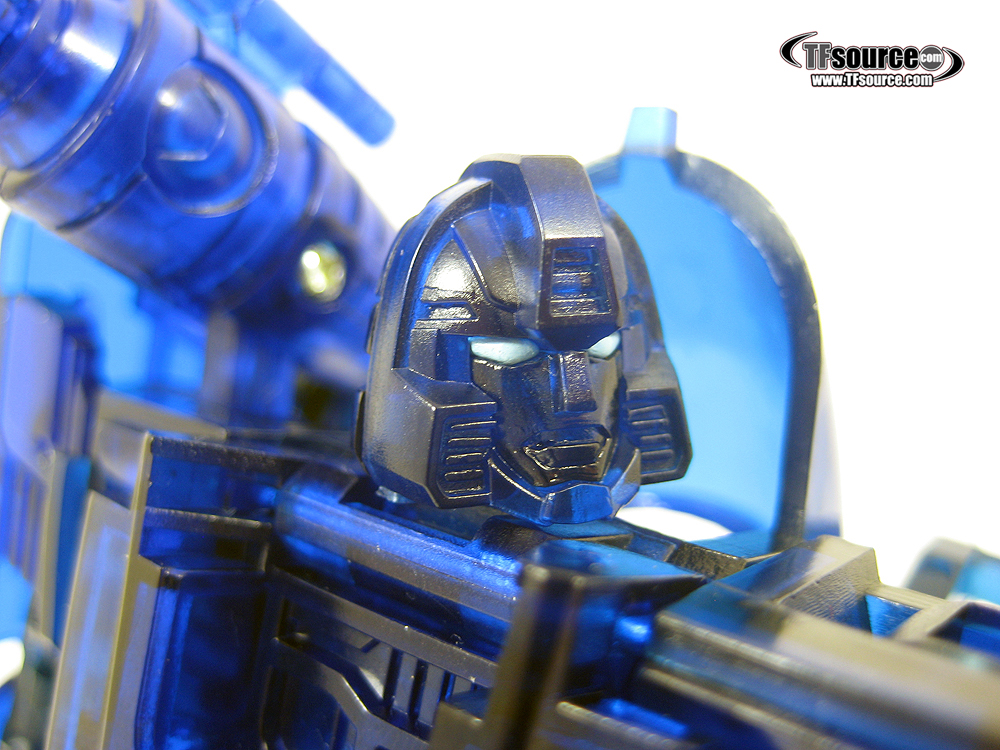 Ain’t no way to hide your cyan eyes

One of the main complaints some collectors have with clear figures is that definition and detail can get lost in a monochromatic ocean of translucent plastic, and this might be especially relevant with a figure as dark as Phantom. Against the white background, though, I found I could make out all of the signature distinguishing features that have made the mould as popular as it is. There’s no doubt that you have to be a pretty solid Mirage fanboy to want both releases, though. 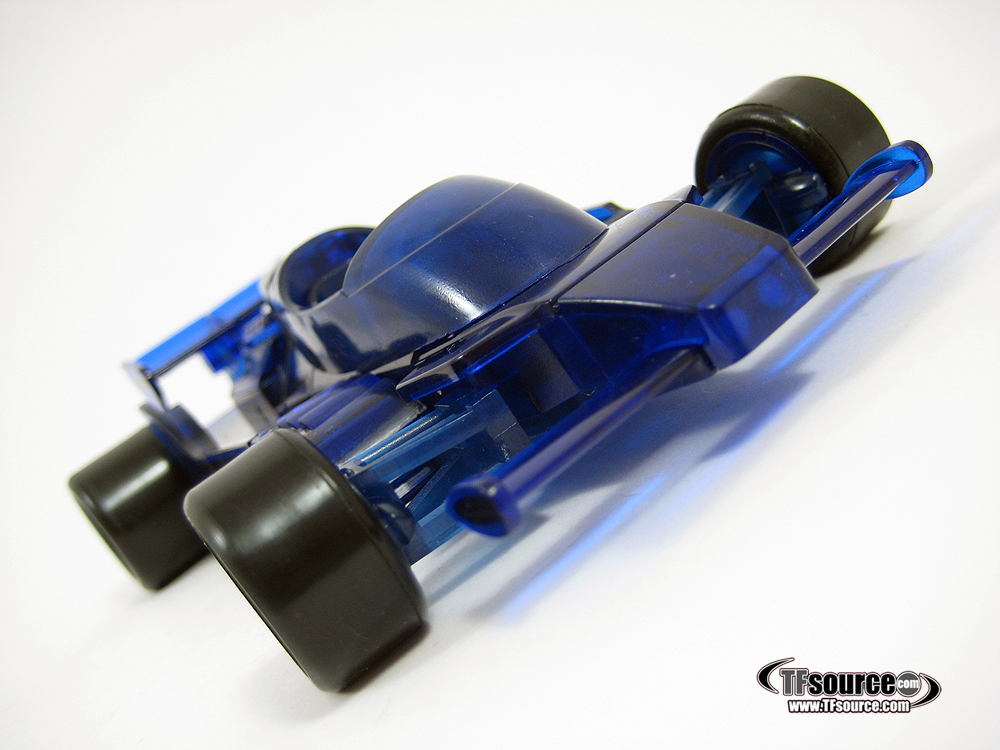 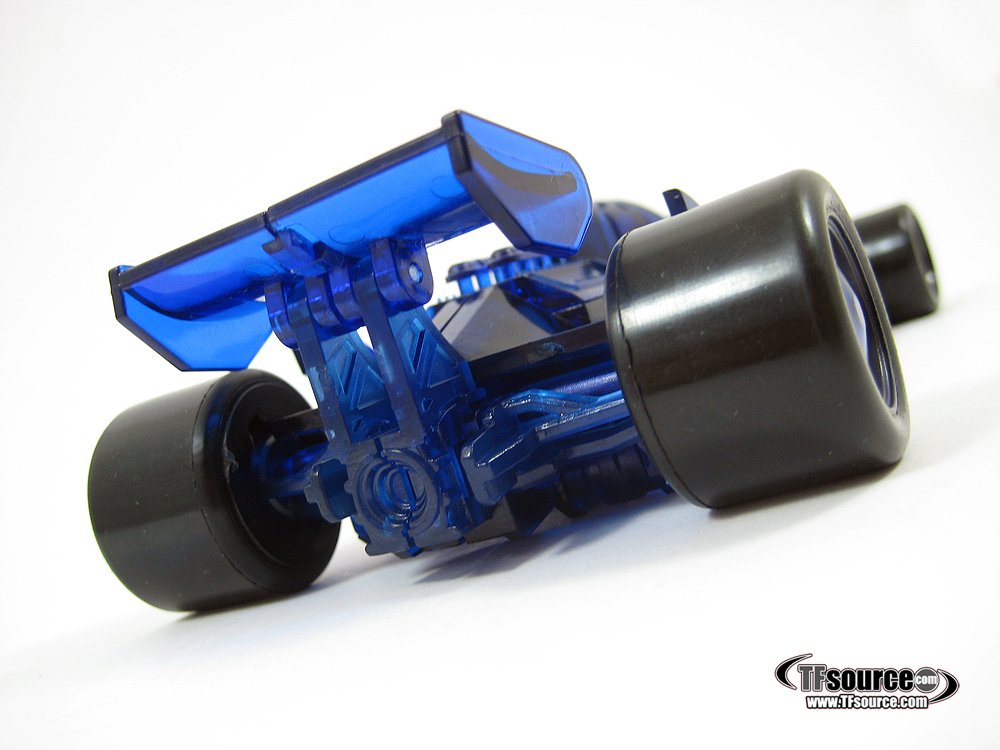 Hot from this angle 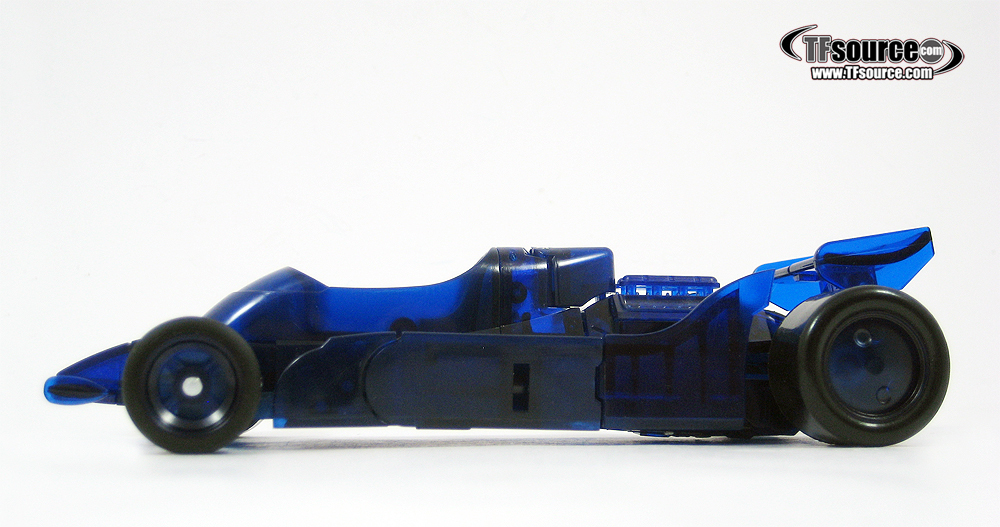 Lack of colour almost makes it look a different car

As beautiful as it may be, getting Phantom into vehicle mode was much more difficult than on Invisible. That battle against the tightness of the moving parts does not encourage you to play with the figure. You just have to be confident it won’t shatter or you’ll get no enjoyment out of the figure at all. Would a completely transparent release have been more relevant to Mirage actually turning himself invisible? Maybe, but DX9 have now announced a special all-clear release of Invisible to made available by lucky draw/raffle to their followers on Weibo. Five specimens apparently will be produced, so best of luck with that, sports fans. 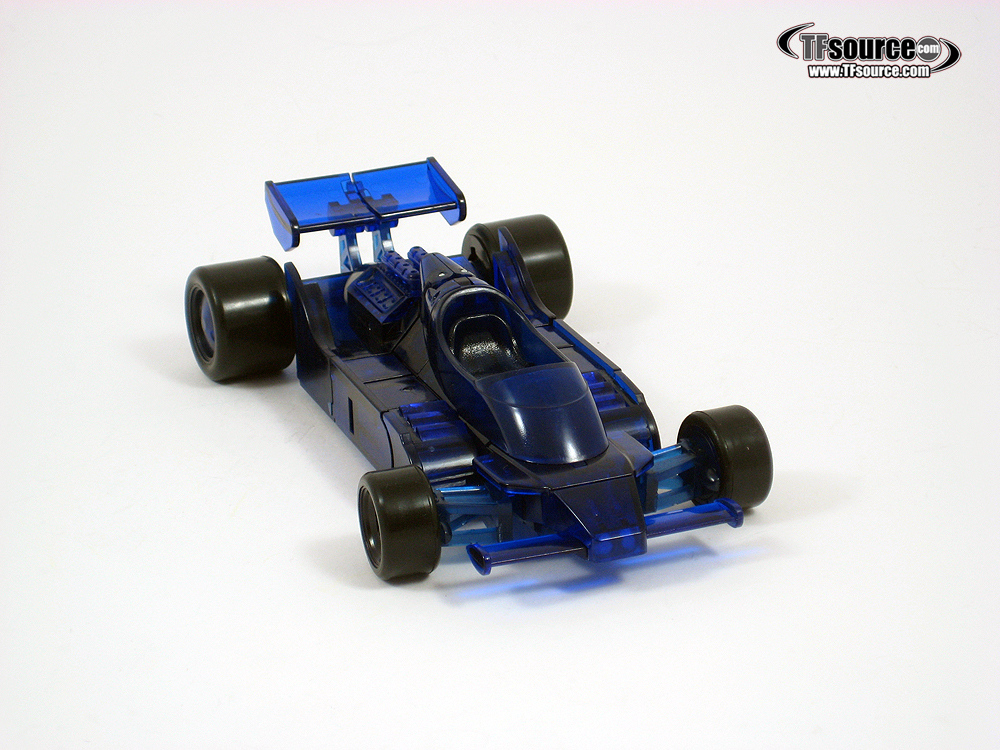 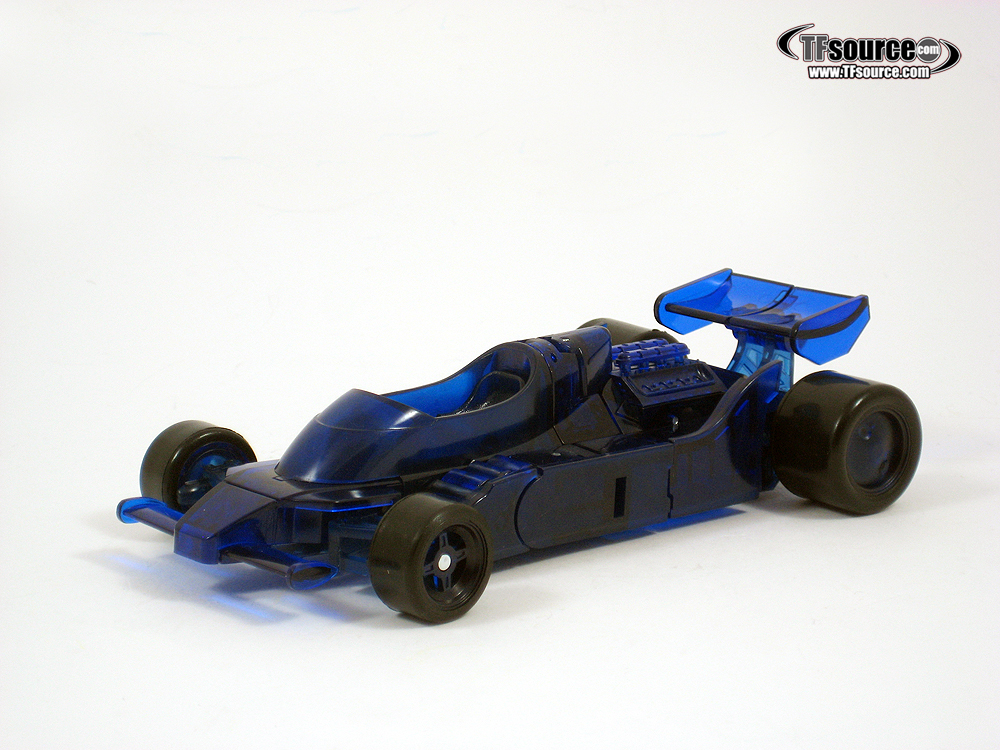 On repeated transformation, things do definitely bed in a little bit and the resistance to manipulation decreases. It should be noted that I didn’t notice any difference in the panel fit and alignment across the mould with Phantom compared to Invisible, it might even be better compared to the production sample Invisible I had, thanks to the added tightness everywhere. One area I did struggle with was the arms, getting them to fold adequately for compact storage and making sure they are up as flush as possible against the base of the car can be hard. But not impossible.

I also found that the vehicle seat popped off at every opportunity, so I literally have to reattach it in either mode because it won’t stay clipped in during transformation when it must be folded over. The rear wing halves also don’t stay clipped together as perfectly as on the regular version. Finally, on issues of QC, one of the rear wheels on my phantom wobbles a bit on its axis, doesn’t roll straight. Popping off the wheel hub and tightening the screw didn’t sort it. 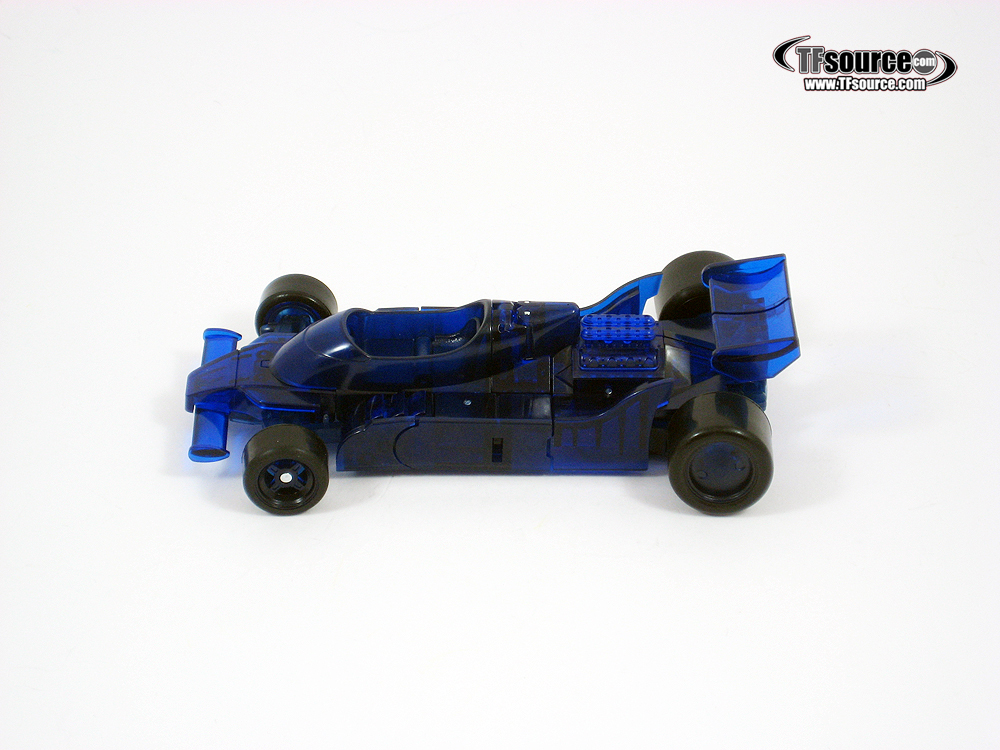 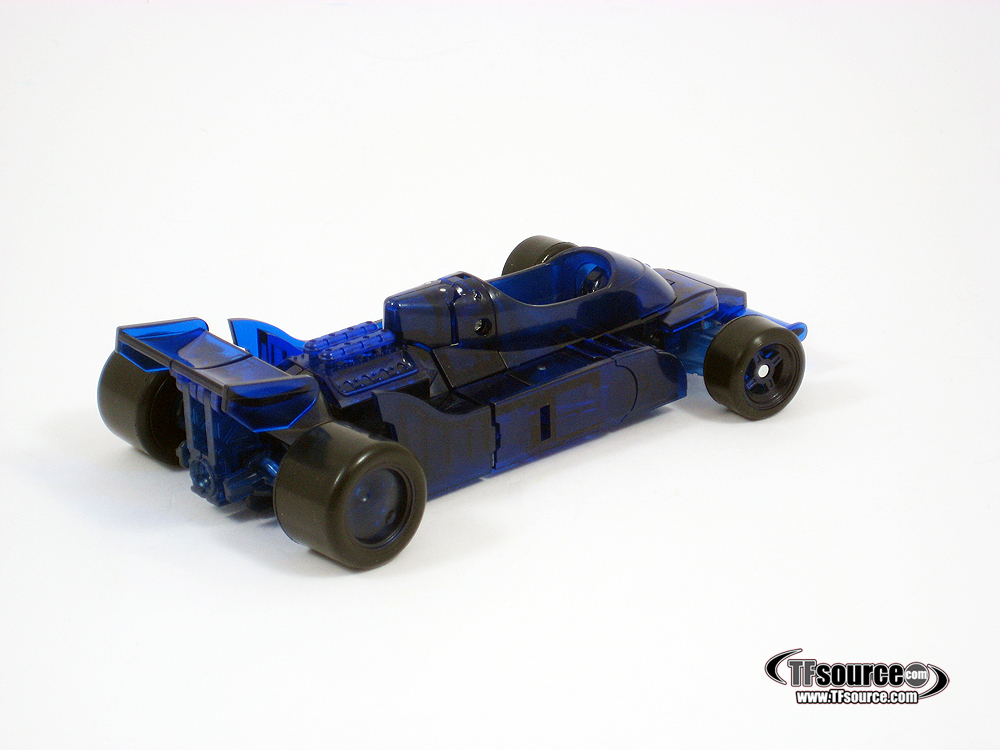 I do actually believe that the deep blue translucency, coupled with the delightfully chosen “Phantom”, create a lovely sense of mystique around this figure that an all clear “Electro Disrupter” moniker and appearance simply wouldn’t have. Does anyone care? Well they ought to, Invisible sports some of the classiest choices of adornments on any 3P packaging I have ever seen. For those who want a little bit of personality beyond the toy itself filling a hole left currently by Takara Tomy’s Masterpiece rollercoaster, DX9 are trying. 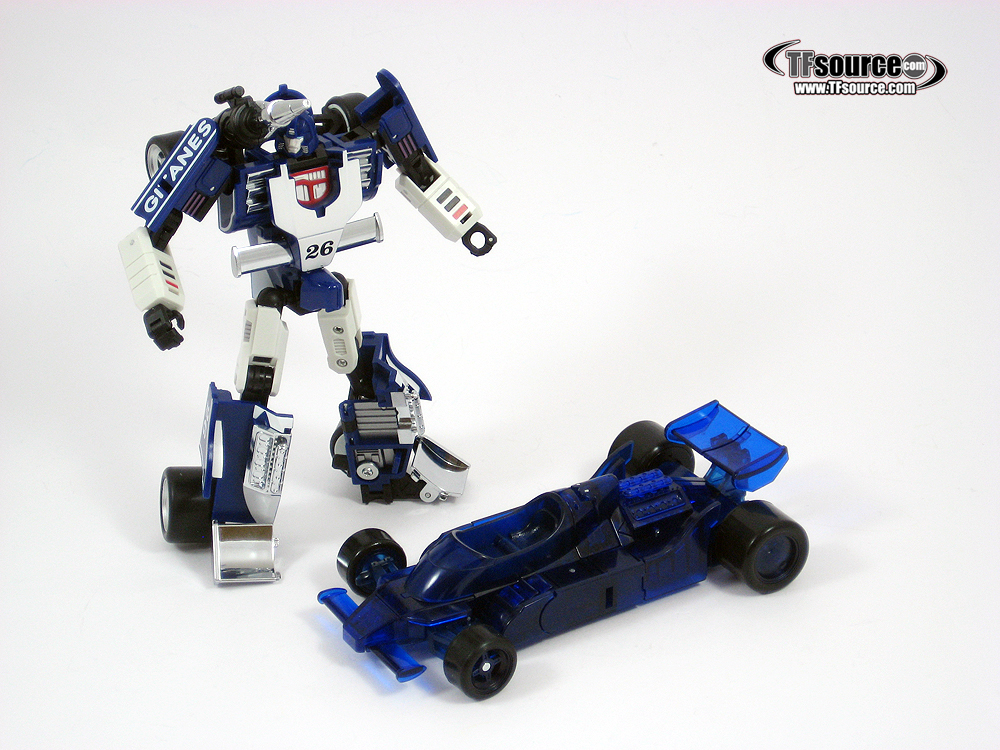 Standing Phantom next to Invisible really drives home what a sterling job DX9 did with Invisible’s deco, with such perfect use of quality looking chrome (oxymoron for some?). The lack of colours on Phantom can make him look a little awkward in robot mode and accentuate the odd, slightly gangly silhouette he has, whereas Invisible masks it with all the colours. Invisible definitely carries the G1 toy look (exposed front wing halves and un-opened crotch piece) better than Phantom. 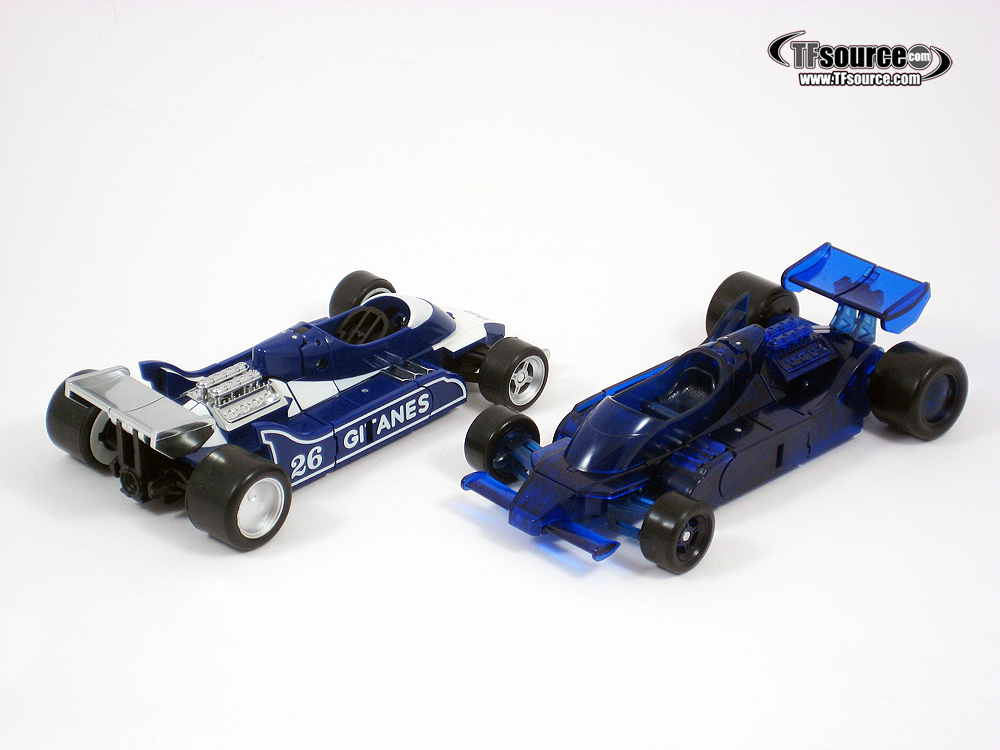 The good and bad of Invisible highlighted by Phantom

Pros and cons here, again I believe that Phantom demonstrates how good the deco is on Invisible. Just look how much that chrome and silver pops on the standard colours Invisible when placed next to the deep blue of Phantom. On the flip-side, the gaping holes in the sidepods and rear wheel hubs are non-issues for Phantom and do not detract from his looks in Ligier JS11 mode. 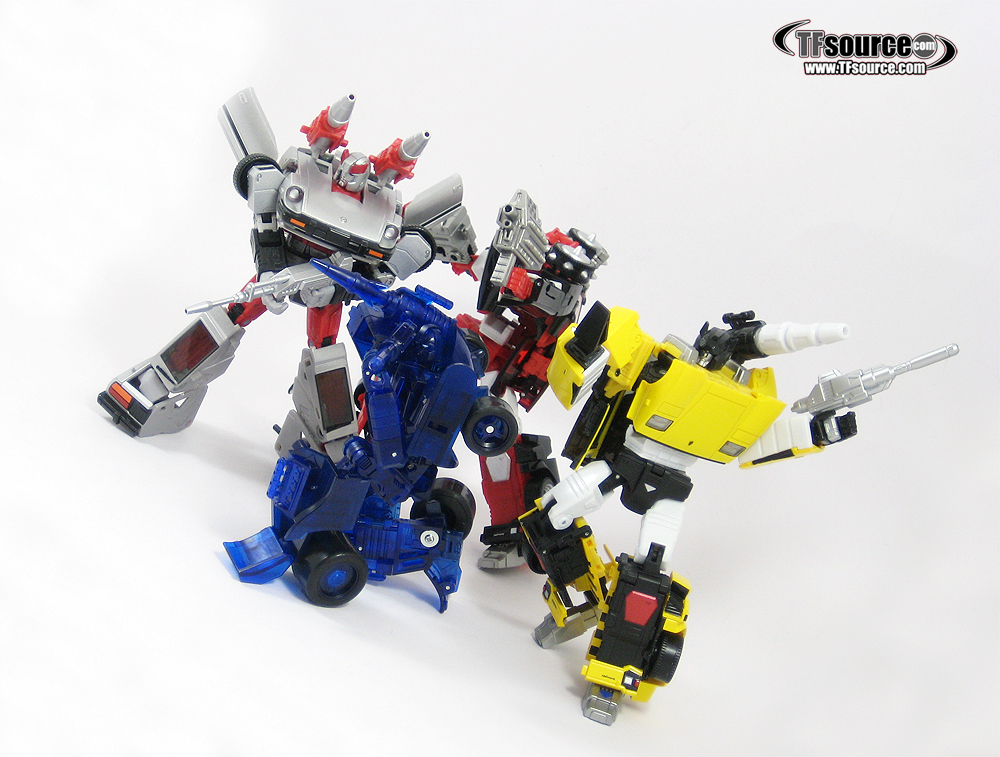 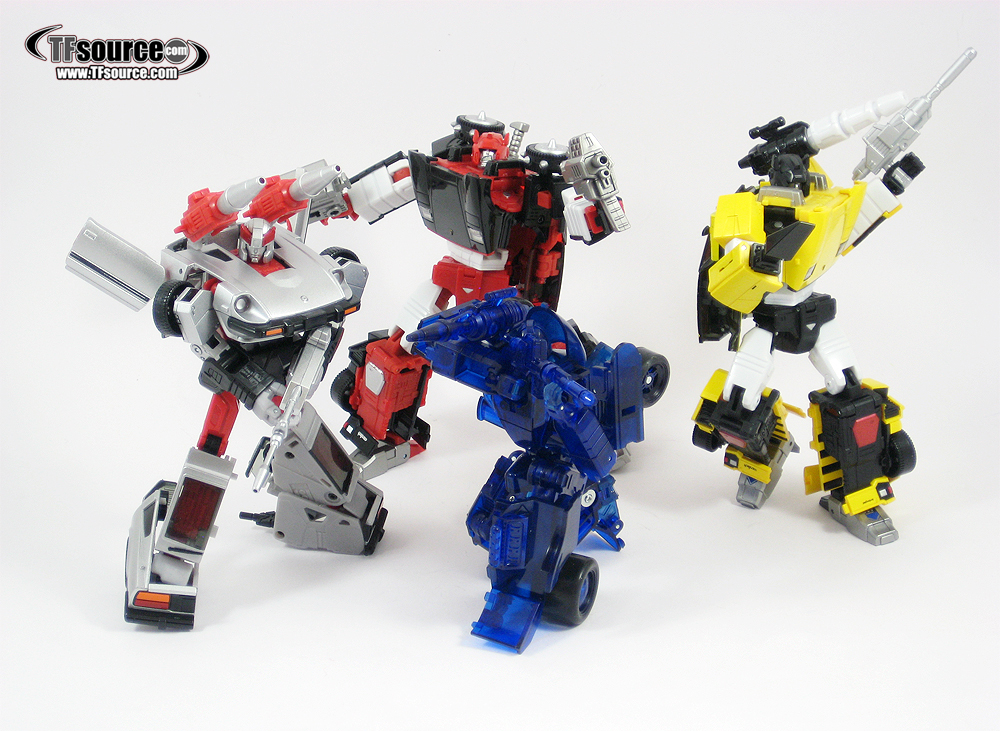 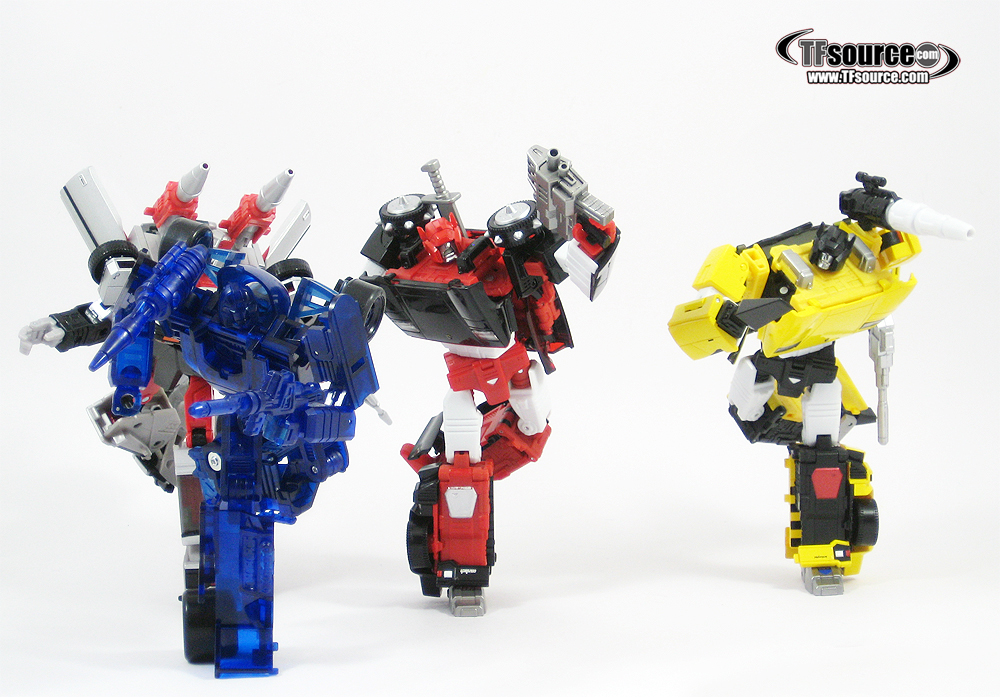 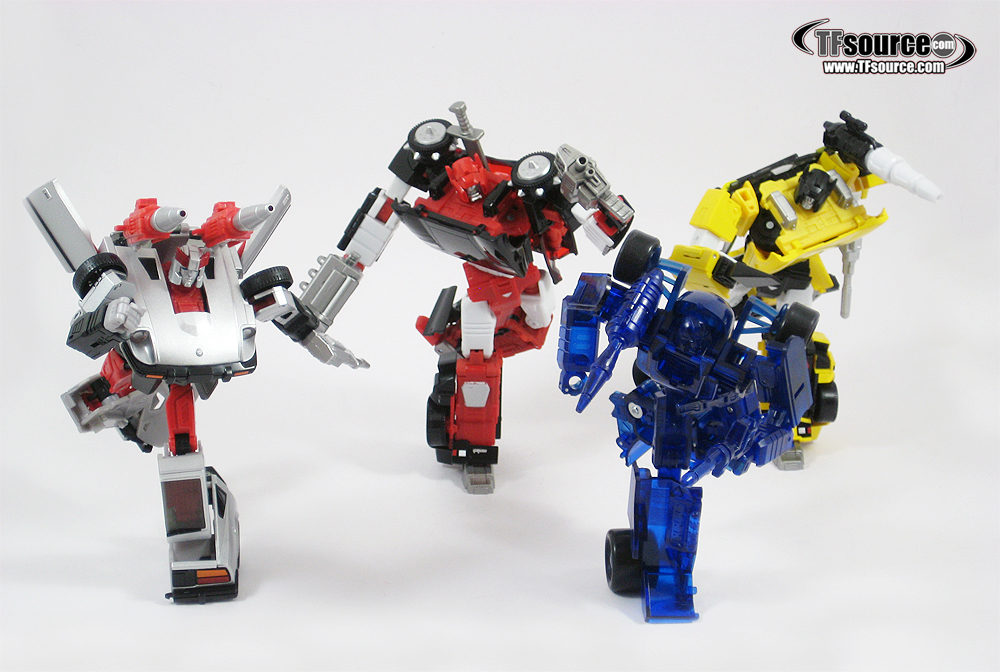 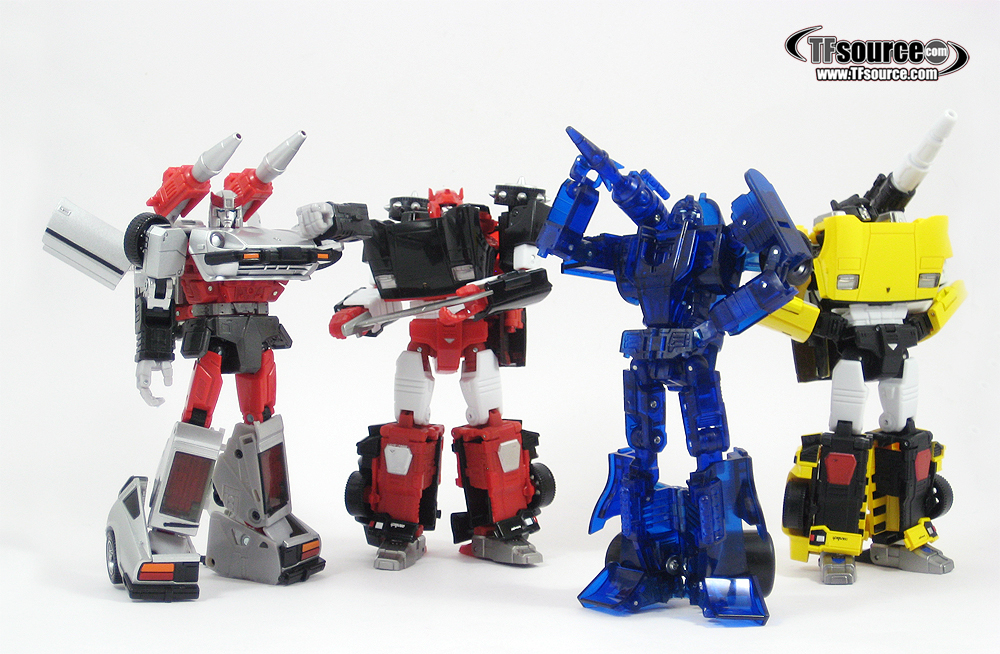 It would be a terribly unjust besmirching of Phantom to say his only appeal lies in placing him strategically behind Invisible in a toy display, simulating a de-cloaking. I’ve set him up above with other badgeless Autobot Masterpiece releases, Team C.A.B.B.A.G.E never looked better with Phantom at the head. However, it would be a fair assessment to say that very few will select Phantom over Invisible, even of it is a mere $5 more at TFSource for example. It’s also fair to say that the Mirage lovers will make up the majority of Phantom owners, those and the clear Transformer addicts (guilty). One final truth, for those that saw Invisible in hand, there was a dawn of understanding in their eyes as to why DX9 are so praised for this mould. The same rings true for Phantom, which has been accused of being even less convincing in concept and execution. In hand, Phantom is stunning, beautifully tapping into the vein of mystique that totally defines the character of Mirage. 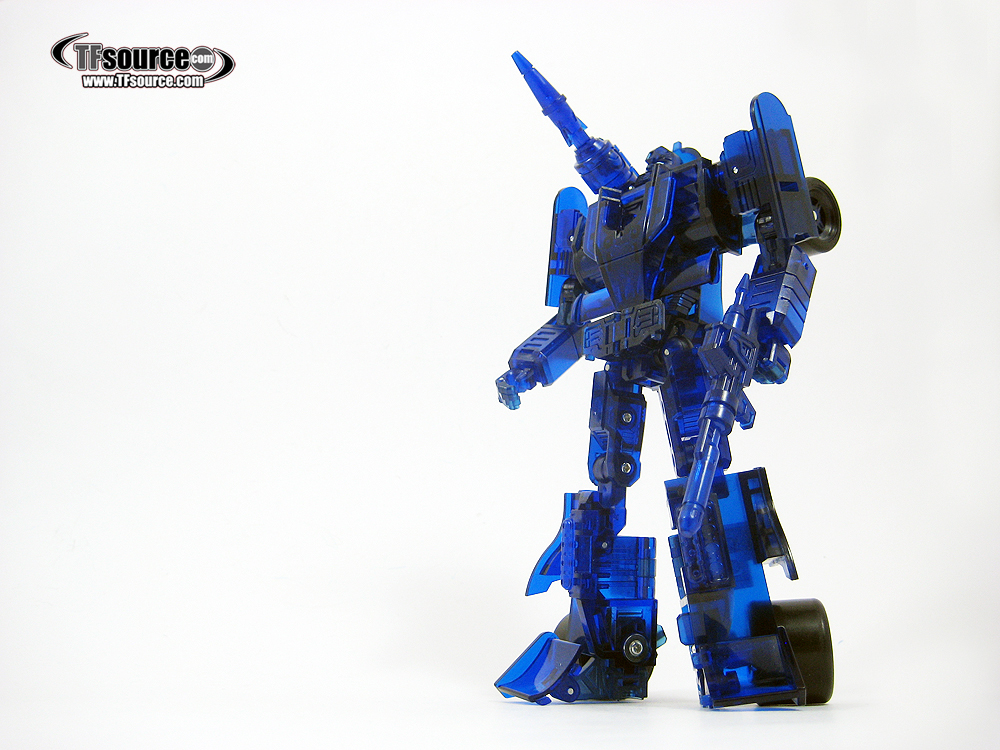