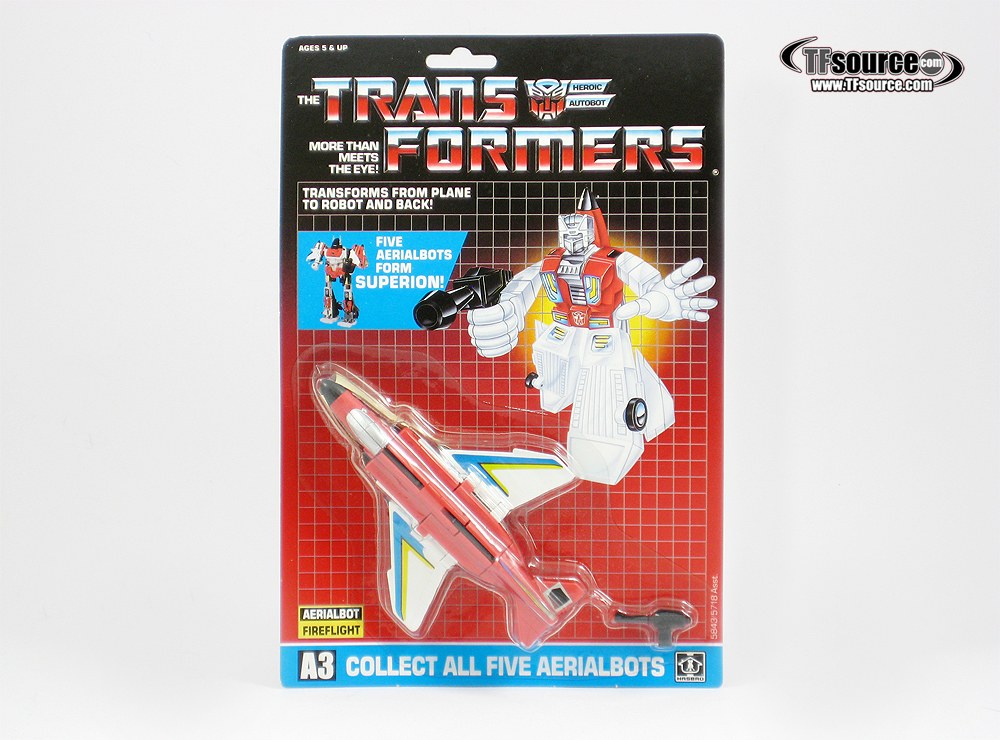 These days, invariably, you will find good condition factory sealed vintage Generation 1 Transformers preserved, immortalised, imprisoned, desecrated (delete as appropriate) in an acrylic display case, with a grade attached. The AFA – or Action Figure Authority – grade toys like Transformers be they factory sealed, opened and unused or even loose. Everyone has an opinion on this, from not keeping toys sealed at all to downright hatred of the AFA and the culture behind grading Transformers, specifically the ‘authority’ part and the implication that the AFA are experts. The other side of the coin is that collectors use the grading process to confirm what they already knew about the quality of their specimen, and are after preservation of the toys only. It’s really not as black and white as we may think.

While I may not respect an arbitrary group of toy graders who can potentially dictate value of Transformers, and have inadvertently created a completely separate niche of high end Transformers collecting, I do respect Transformers collectors and I try to be open-minded towards collectors, human beings, wherever possible in my interactions in the community. Meeting a number of AFA-collecting enthusiasts over the last 3 years has helped me understand their motivation and interest in this type of collecting. No two collectors do it for the same reason, some of those with graded items actually dislike the AFA and their methods, but they want their toys preserved in a particular way. That said, I won’t be defending the practice. I just wanted to experience it, and a year or so ago a perfect opportunity presented itself. 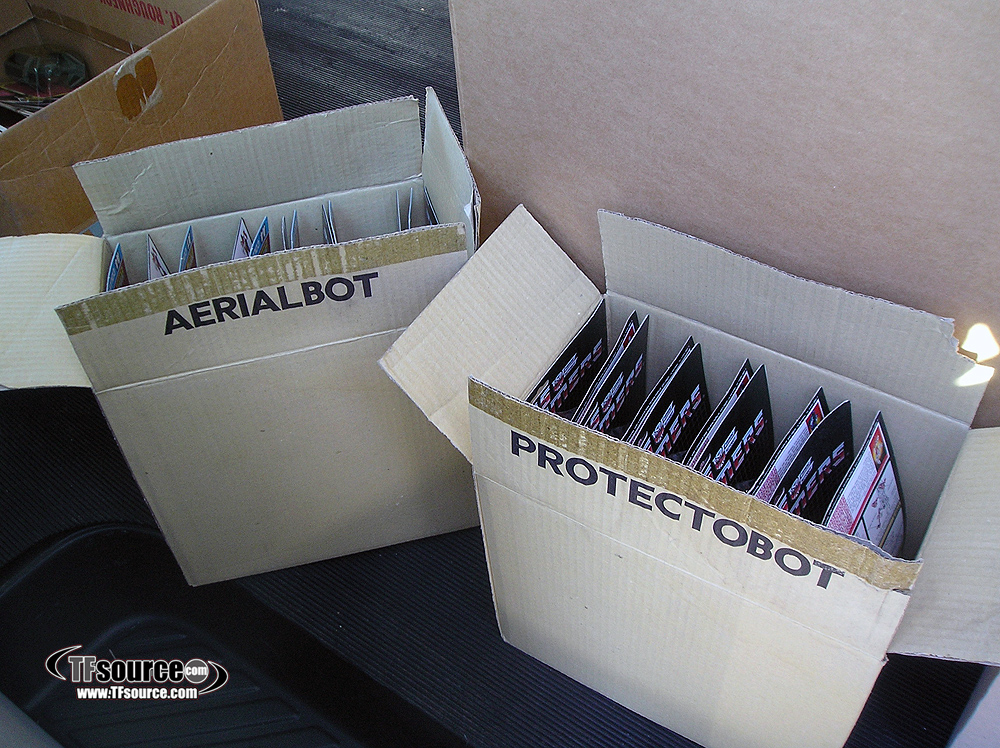 THIS is Combiner Wars 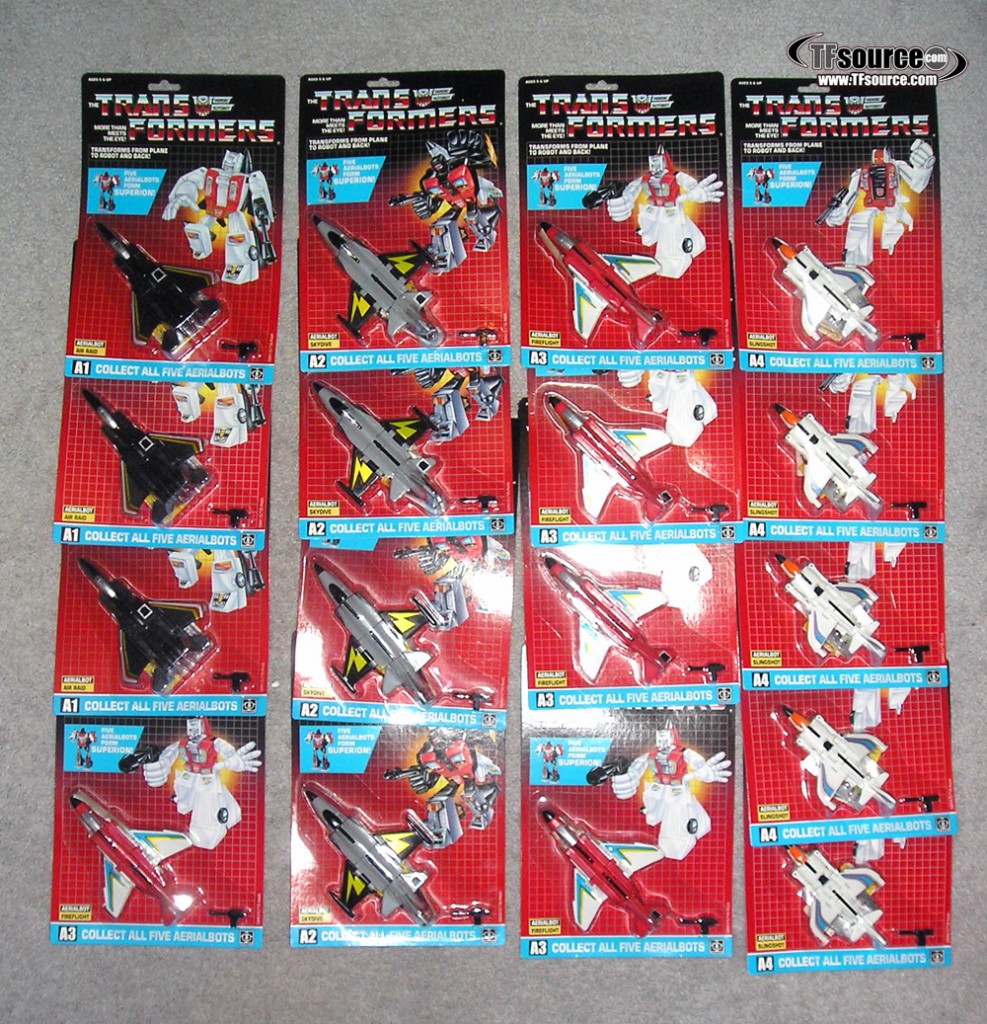 Once upon a time these Superion limbs were hitting shelves

This astonishing find consisting of multiple cases of sealed Transformers, amongst other things, cannot be described as anything but the discovery of a lifetime. The fact is – like it or not – virtually every single item out of those cases of Aerialbots, Protectobots, Stunticons and Combaticons will have ended up sold and graded in very short order. All but one Aerialbot, a lonesome Fireflight, who was chosen for a special project. This project. 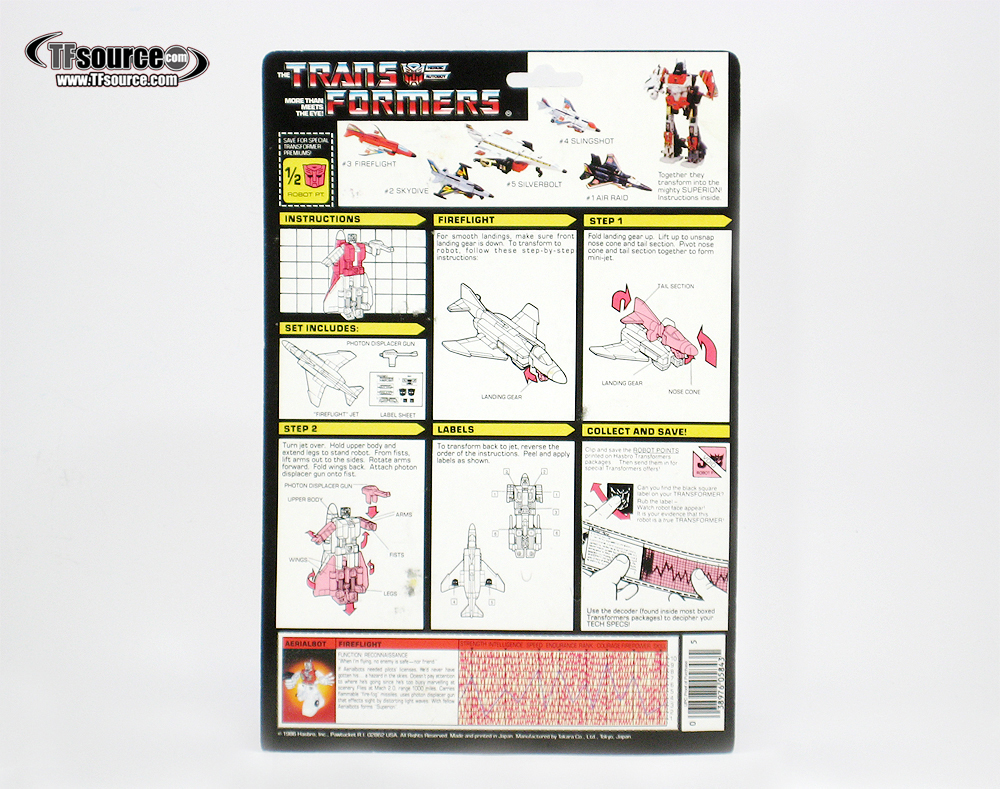 Looks perfect from a distance

For a while now, AFA regulars have been saying that the grading process is not as consistent or representative as it once was. An AFA grade 90 is now considered the highest something will realistically achieve, and it is the belief of a number of these regulars that the AFA are being harsher with their scores. This Fireflight was selected for me to submit to the AFA, as a first time customer of theirs, in order to experience and document the process for those interested in the details – including costs – of the operation. There was a concern that were it to be submitted by a regular, especially someone who dealt with the AFA as regularly as the finder of the above Fireflight (and its mates), it might influence the grading moreso than if a first-timer were to send the AFA something of this quality. Another question mark over the integrity of the grading system. 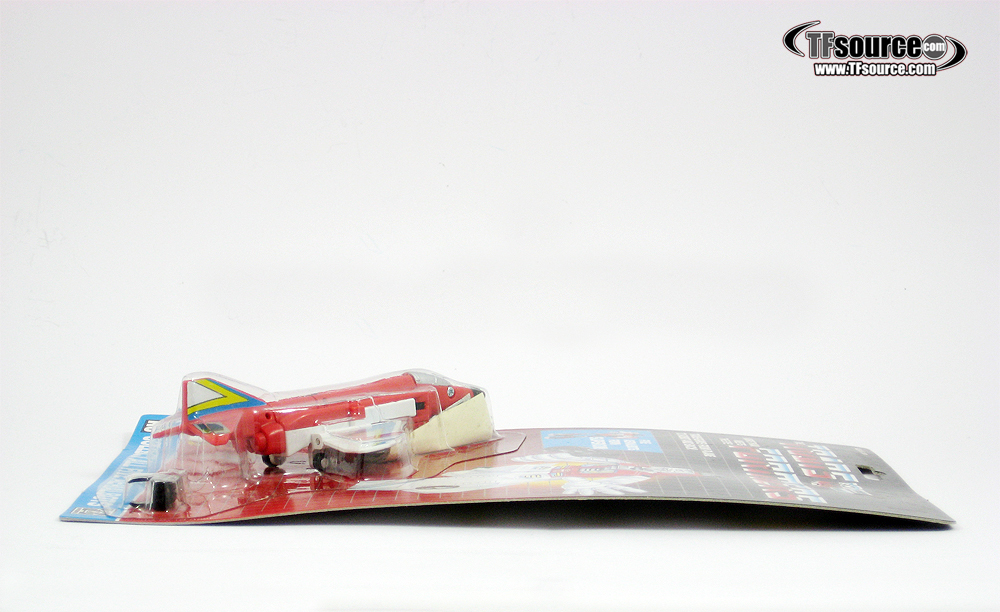 Beautiful is the only word that comes to mind

We decided that I would scrutinise the Fireflight photographically – because I am in no other way qualified to scrutinise it other than visually – in order to fully catalogue all of its flaws, qualities and quirks. This would hopefully allow some experienced AFA-graded TF collectors to weigh in and predict what the grade given would be, and for us to try and establish some kind of basis for how certain grades are achieved. This is exactly what I did on TFSquare One blog not too long ago, and I will use some of the writing there in this article as well, in addition to the photographs prepared for that post.

In order to do any of the above, we must first understand the basic grading criteria and process.  There is an overall grade for a figure like this, and three subgrades. “C” for card grade, “B ” for blister grade and “F” for figure grade. 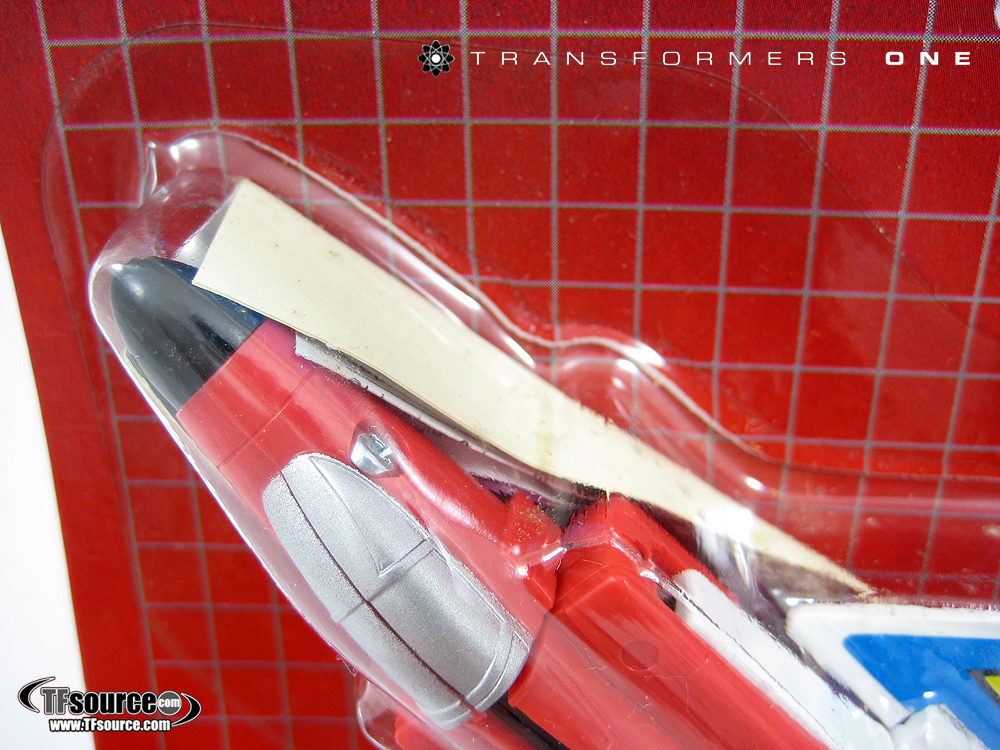 Instructions/stickers wrapped around the nose cone 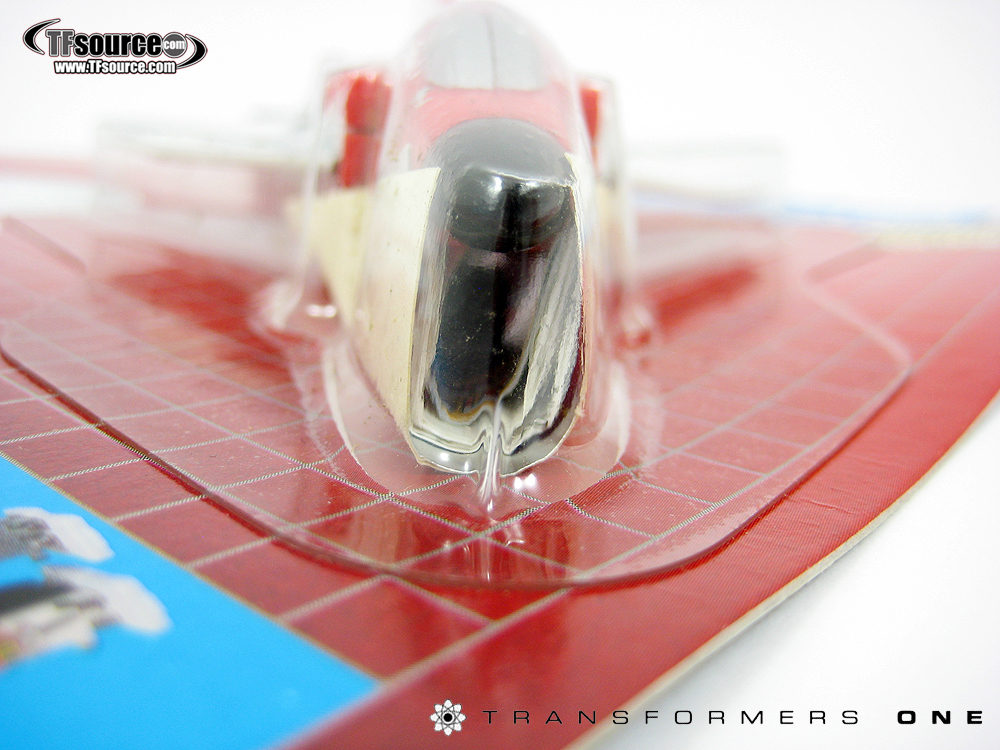 So bizarre to see a vintage TF so mint 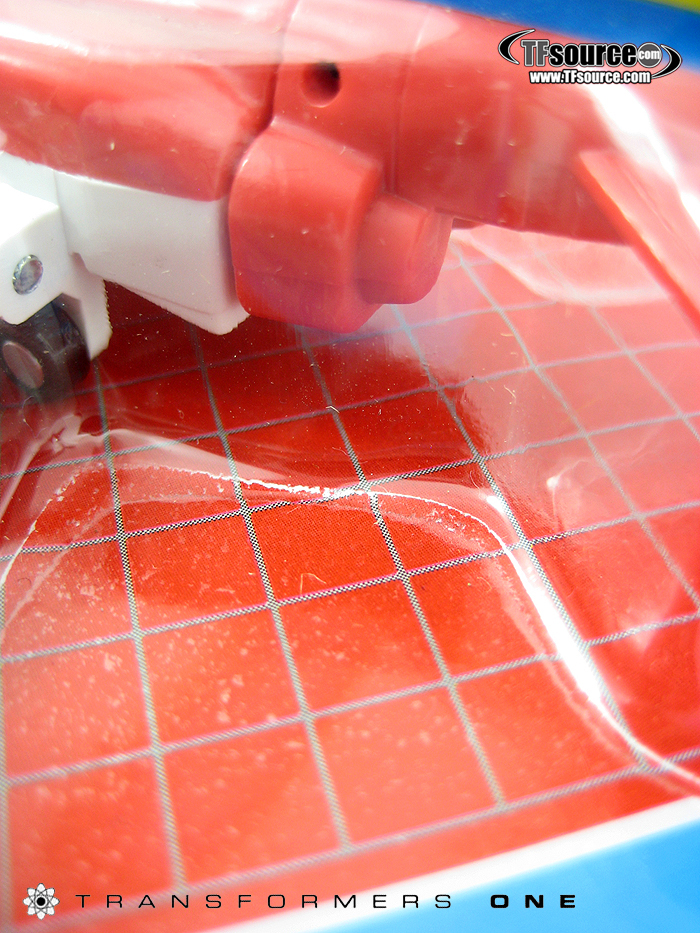 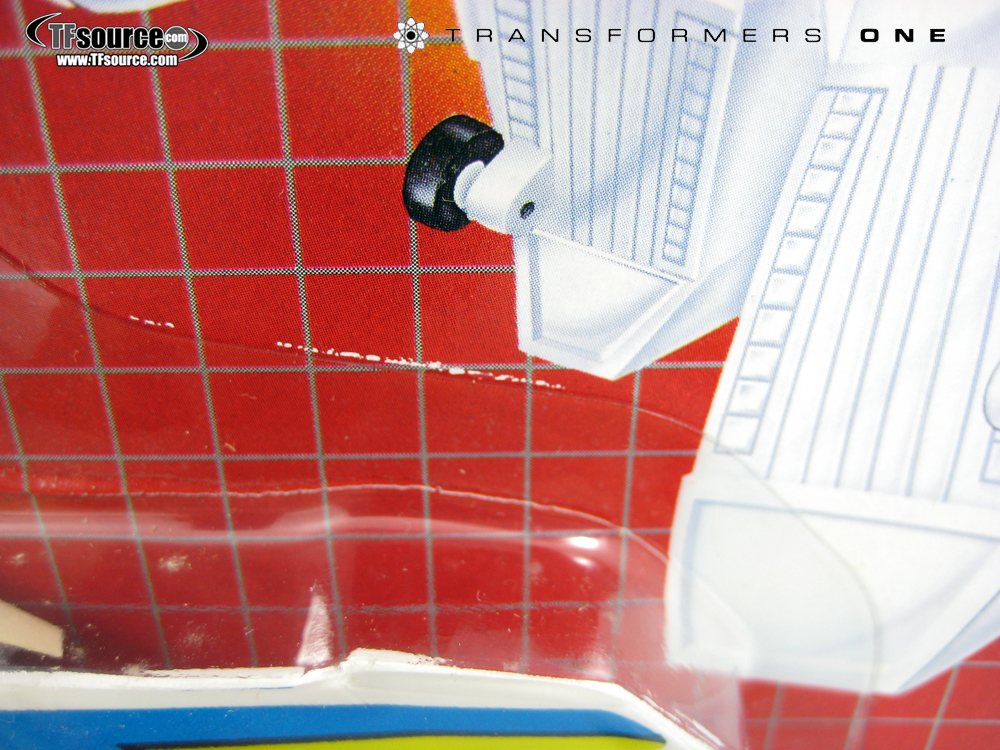 So despite the detailed guide on the site and apparent science, there is clearly a judgement to be made by someone beyond the subgrades. You can read their full blurb on how they grade items HERE 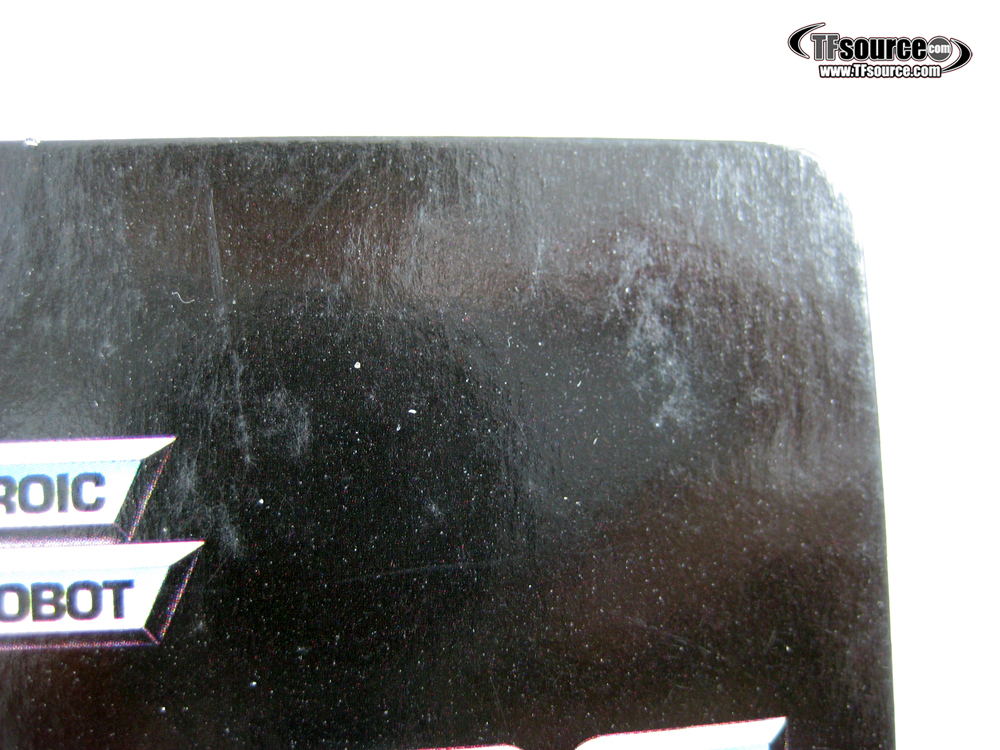 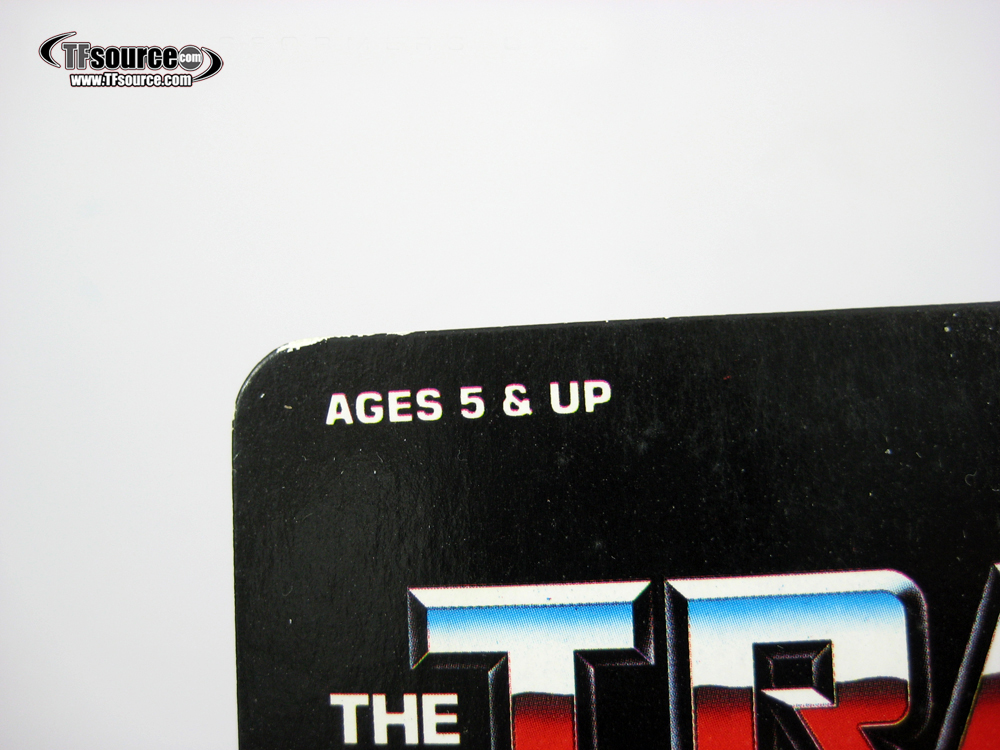 Add a zero? Remember this picture 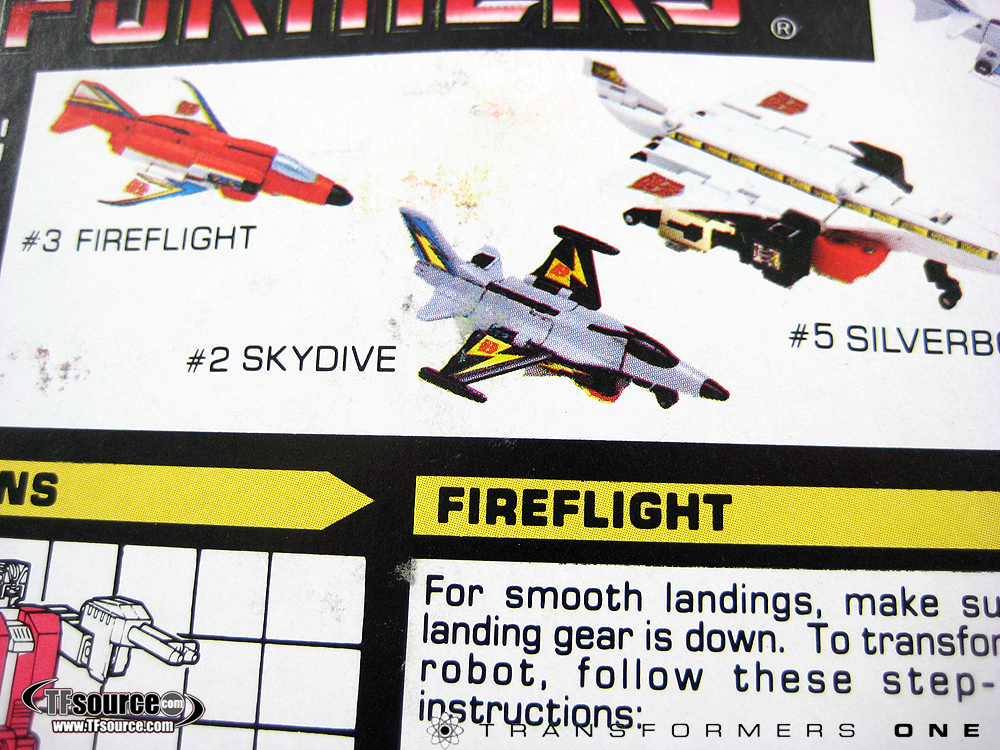 Many blemishes visible on card back 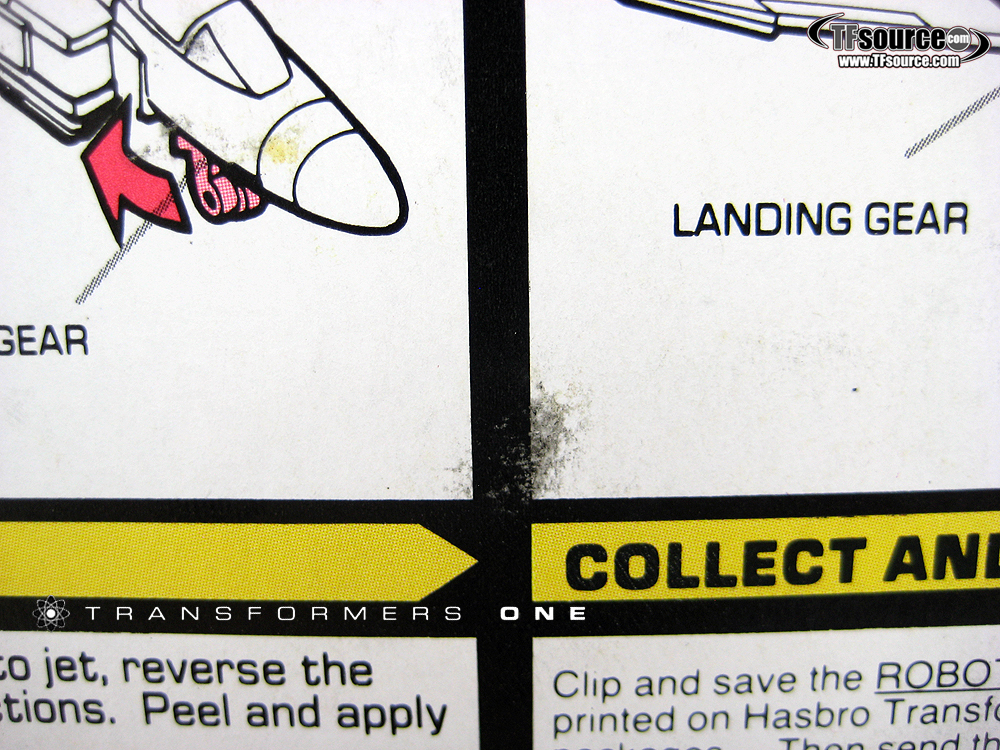 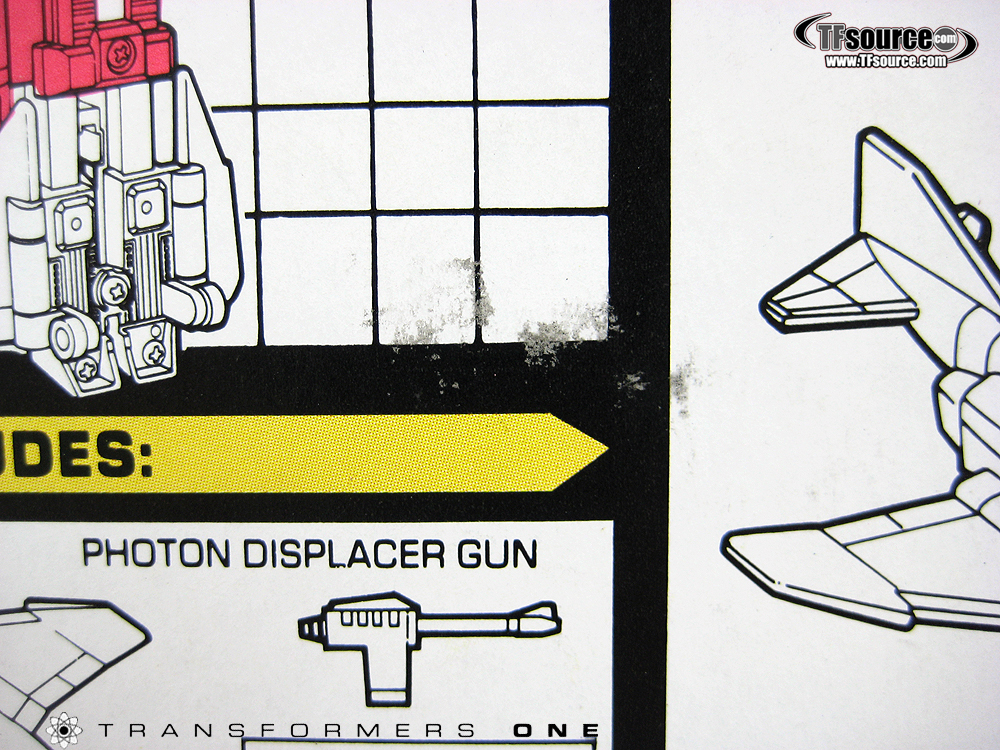 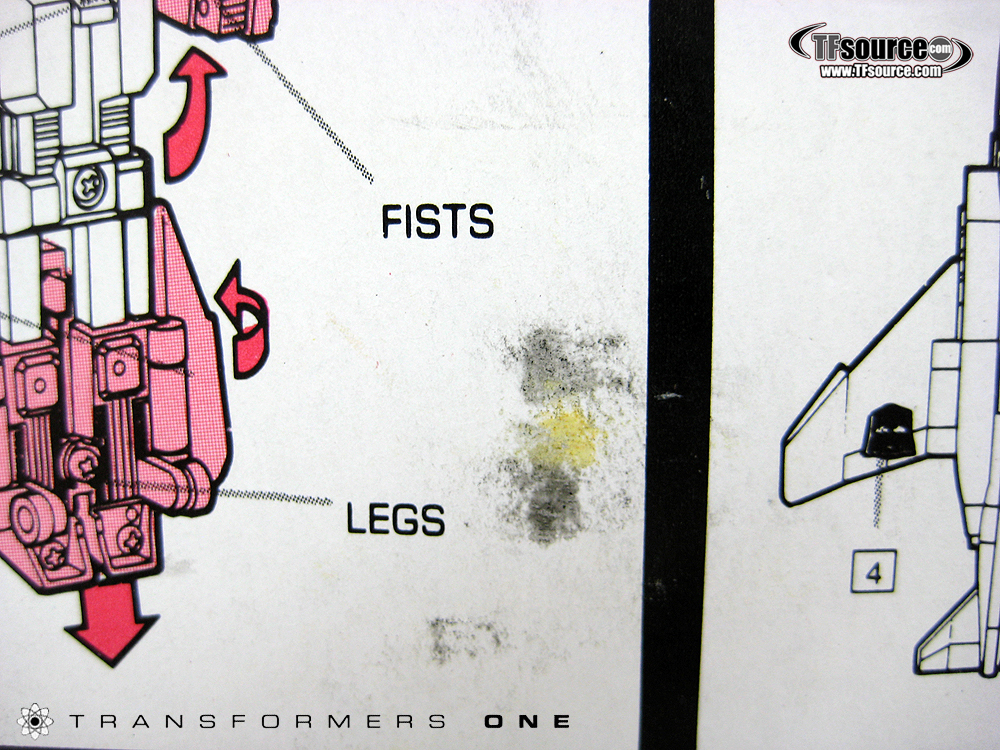 This is easily the worst blemish

So, looking at all the photographs of the sealed Fireflight so far in this article, we can see that there are blemishes here and there, and the card is clearly not totally flat despite the fact that the thing is completely sealed and has never been on a store shelf. I asked a number of the collectors who had graded items themselves (and some who hadn’t) to lend their opinion and predict how the grading would go under current circumstances. Here are their responses, and in brackets, where they were posted.

Eightieskid (TFW2005) – “My own thought would be that the card has a few issues, you have the usual warping after nearly 30 years, plus the discoloration on the back in the instructions area that you have pointed out. Nevertheless, the card is in good condition, the corners are not frayed or bent, and there are no visible creases, tears or holes. I would hazard a 75 for the card, an 80 on a good day.
The bubble appears intact and still attached to the card for now, though as many here can attest, the bubbles often fall off on their own after enough time has passed. The bubble is undamaged, with no denting or cuts. I would think an 80 here.
The figure appears to be in excellent shape. No issues that seem apparent in the pictures. I would think an 85 here.  So overall, I would think a 75 or 80”.

Malach Ra (TFW2005) – “I would say overall strong 85. There’s no way it’s a 75 IMO. There just aren’t enough flaws. The card really isn’t warped, the bubble looks flawless, there are no bends or creases. There are some discoloration/rub marks, but not enough to warrant anything less than 85 card grade. I think it could definitely pull an 85 with subgrades c85, b90, f90. Just my opinion here”. 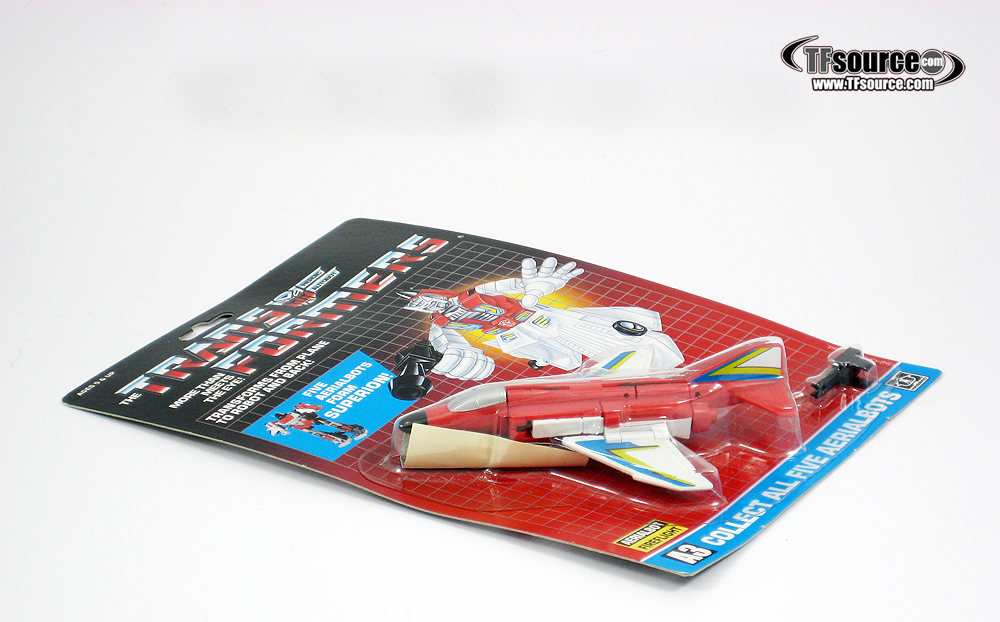 Fish out of water

SuperQuad7 (TFSquare One Facebook) – “Even after reading the two assessments by the other collectors (above) that I greatly respect there (as I know both of those guys to some degree from TFW2005), I think my rating would fall somewhere in between. C80 B80 F90 Overall SQ7A: 80”.

Jonnyshaft (TFW2005) – “Dead on the money. Going just by pics Malach Ra is spot on. 85/90/90 overall 85 is my vote. At worst triple 85. In my grading experience a card’s waviness has never entered into the grading, maybe because once cased it’s held flat”. 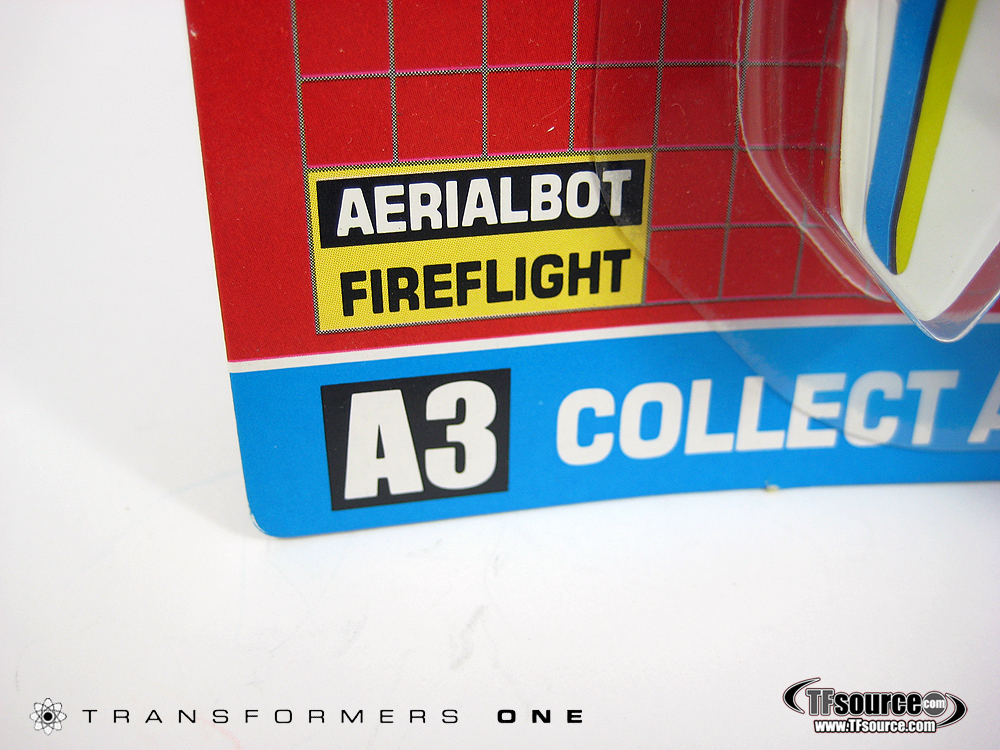 Prime Kiwi (TFW2005) – “From my experience with graded items the biggest determining factor in the overall grade is the bubble followed by card condition. The figures are MOSC, the only way the ever get marked down is if there is an issue with the bubble causing rubbing on the figure. The bubble is looking pretty good, no obvious dents although there is some colour break around the edge of it. Not sure if this is marked against the bubble or card, but I would guess bubble since that what is causing it. The card, a little wavy when flat but that is expected. However the killer is the blemish on step 2 of the transformation instructions. It’s obvious on the thumbnail image and up close looks a little yellow/green. If you can spot a blemish 2 meters away you are in trouble. 90 is really 10 out of 10 these days so combined with the other scuffs that’s 10 points off.
Overall I would be happy if this came back an 80 with subs 80/90/90”.

Mazdaspeed7 (TFW2005) – “Maz that should be an 85 from the pics you’ve put up but carded figures can be a coin toss some days. Ok so the wave in the card won’t hurt the grade at all & if the bubble is good with absolutely no dents but a couple of fine scratches the bubble should be an 85 & if its really clear then a 90. The card should be an 85 but the corners may give it the 80 card sub like Killa is predicting. The figure is another tough one with so many stickers for them to take points off. They’ve been bad for it lately & even giving 80 figure subs. Ok so for my AFA prediction, 85(80-85-90). If I was grading it 85(85-85-90) but I’d need a close look to give the bubble a 90. It would only be a 75 or 80 if they found an issue with the bubble like a dent otherwise it’s an 85 over all which is all that matters as sub grades can be way off some days. It’s all subjective as it’s been said all through this thread”.

So there you have it, the project, the predictions and now the wait. Well…that’s not entirely true, this gem has already been graded and was returned just a few days ago. See you, then, next week for a detailed breakdown of how the grading submission actually took place using the AFA website, the mechanics of getting the item there and back, and of course, the final assessment and official grading of this MOSC Fireflight.