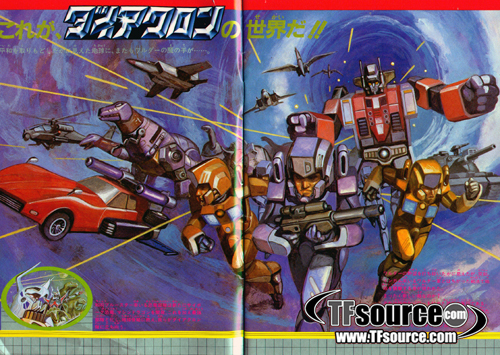 Just very recently I read a great blog post by Dave Barry (Gangu Stars) on a new phenomenon called ‘digital collecting’, a practice whereby toy enthusiasts strictly collect images of toys they desire instead of physically owning them. Now while most of us want to be able to touch and transform the items in our collections, some amass photographs (of others’ toys) and call that their collection. Whether I understand it or not, I was reminded of just how much Transformers imagery we must all have on various storage devices, some of it ancient.

When I used to look through mine I would see unsolved mysteries, holy grail Transformers and Diaclones, incredible artwork and scans from paperwork as well as half-finished article material. Nowadays there are far fewer unsolved mysteries and I’ve owned much of what I lusted after a decade ago. Regardless, on my last look-through the archives this week a few things stood out to me. Lyrics are from “Remind Me” by Royksopp, a song I can’t separate from my time online in the fandom during those years. 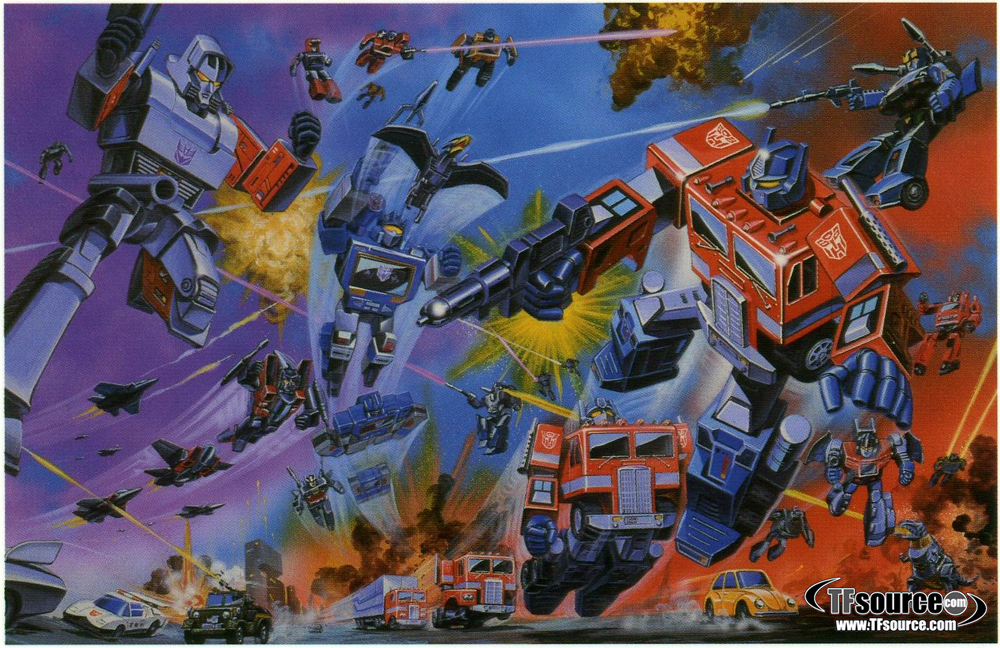 Images like the above how now been around in the public domain and seen by many for a while, they even feature in very high quality in publications like Legacy, the collection of Transformers artwork that IDW just put out. I remember when I first saw this image, the existence of a Diaclone Police Sideswipe (bottom left), Diaclone orange and red Constructicons (middle top) as well as Blue Bluestreak in Transformers imagery sent chills down my spine. A very big part of me is happy – and partially responsible – that so much is known about early Transformers history and the transitional period between Diaclone, Micro Change and Transformers in Japan and the US.

I won’t lie though, I miss the sensation of looking at artwork like this and being lost in fascination at how Diaclones could share a space with Autobots and Decepticons. So much of what kept me in this hobby over the last decade and  a half centred around investigation, archaeological information hunts and the discovery of never before seen variants.  In the last 12 months I have found it exceptionally difficult to put together even 1200 word articles on new discoveries in the field of vintage collecting compared to 2011 to 2013 where I was able to produce one every couple of months.

“And everywhere I go, There’s always something to remind me
Of another place in time, Where love that travelled far had found me”

I stumbled upon this image of my post-2003 collection sale recently too. I had just gotten rid of all my Diaclone, G1 variants, minibots and reissues. All except the mailaway Tigertrack and TFC White Astrotrain reissues. What you see above is the entirety of my collection display from the time. This year I have expanded my collecting horizons enormously, including tonnes of comics, Transformers Animated, TF Prime, FOC data disks, 3rd party products, re-entering the Masterpiece arena and a touch of vintage Macross. The result is that I now have a bigger and space-claiming collection than ever before.

I always felt some degree of pride in keeping my collection below 100 figures. It stands at over 350 now, and keeping a majority of it in storage is a reality. It’s nice to have more toys, but I do miss the simpler time when I had strangling focus and a smaller, manageable collection. It’s really very easy to start dabbling in this, that and the other, causing one’s collection to grow in multiple directions simultaneously. This is fuelled by the relentless onslaught of new official and unofficial product, how dangerous it is to actually be given what you want!

“A woman holds her tongue, Knowing silence will speak for her” 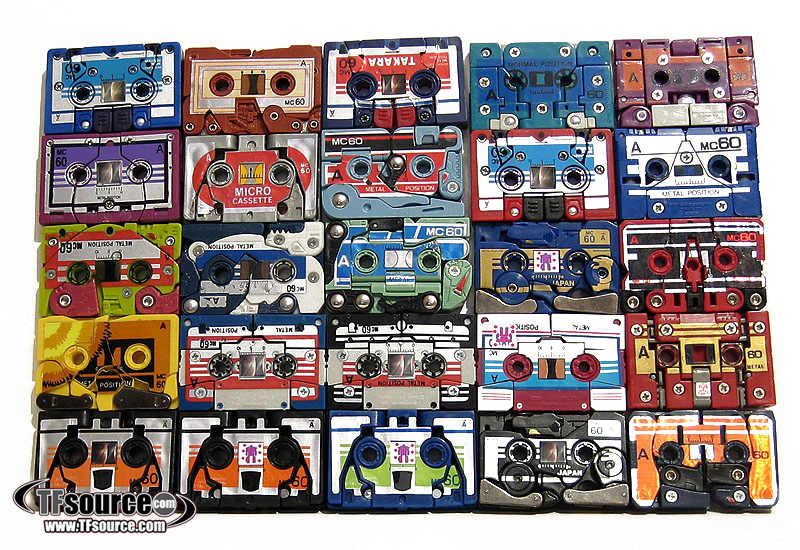 Go on, name them!

I love this image from just under a decade ago. At the time it represented an enormous achievement for a UK collector friend of mine who had broken his back and his bank to land a set of vintage Japanese exclusive C-123/C-124 Dinocassettes. This was at the younger end of the reissue spectrum, you can see the E-Hobby Cobalt Sentry Microman homage cassettes in amongst the vintage goodies. Laserbeak and Steeljaw from Soundblaster & Twincast sets respectively can also be seen in there. Again, from just after a time when those sets were enormously sought after and expensive, those figures were reissued and suddenly accessible.

While Dinocassettes were still horrifically expensive at the time, at least you knew that you weren’t getting a counterfeit set. Other gems include the Four Star KO grey Laserbeak and the Micro Change Series Micros robot repaint – referred to these days as pre-TF “Enemy”. So, this image reminds me how nice it has been to have reissues fill so many gaps in collections, but at the same time saddens me by reminding me how proliferative counterfeits and KOs intended to fool collectors have become. 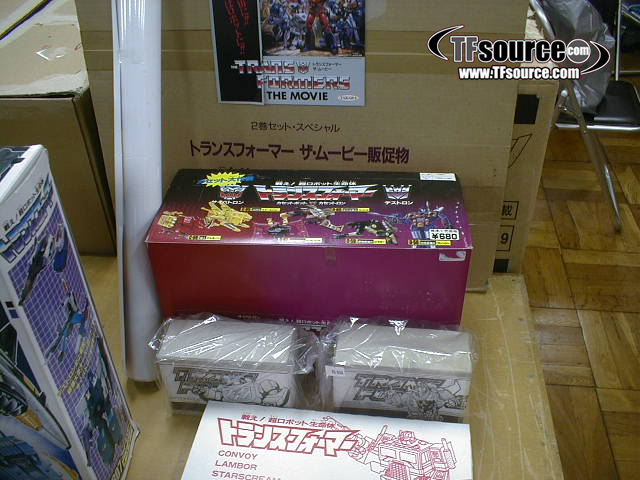 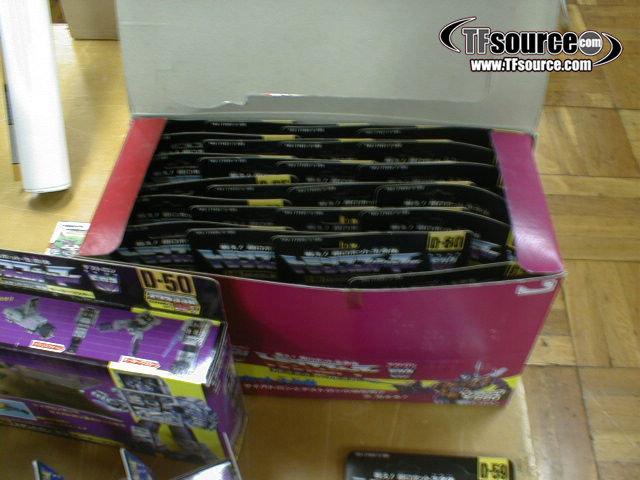 While an image like this is rare as rocking-horse-posability these days, I’ll try not to sound so melancholy about the state of things! A decade and more ago, BotCon – never mind BotCon Japan – was a mythical overseas extravaganza that most UK collectors like myself could not conceivably attend. Every time I met someone who had made the journey across the Atlantic to the event, it was like meeting a celebrity. Someone who was so much more serious and dedicated to the hobby than I could ever be.

I would await images and discoveries from the shows taken by collectors I knew overseas. Black Tracks was discovered this way and I’ll never forget reading accounts of people flicking through digital images on Fumihiko Akiyama’s camera, asking questions in vain. You’d hear stories of prototypes and lucky draw vintage items changing hands or appearing for the first time, people selling Japanese carded cassettes straight out of a display box and of course the unbelievable – and probably unidentified – stuff the Japanese BotCon dealers would bring over. Now though, I’ve been to BotCon twice myself and we have a pretty damn good show in Auto Assembly on our doorstep (relatively), many UK collectors make the trip to BotCon but these days Asian TF shows can tend towards new product more than displays of never before seen Diaclone or JTF goodies.

“It’s only been a week, The rush of being home in rapid fading,
The failing to recall, What I was missing all that time in England” 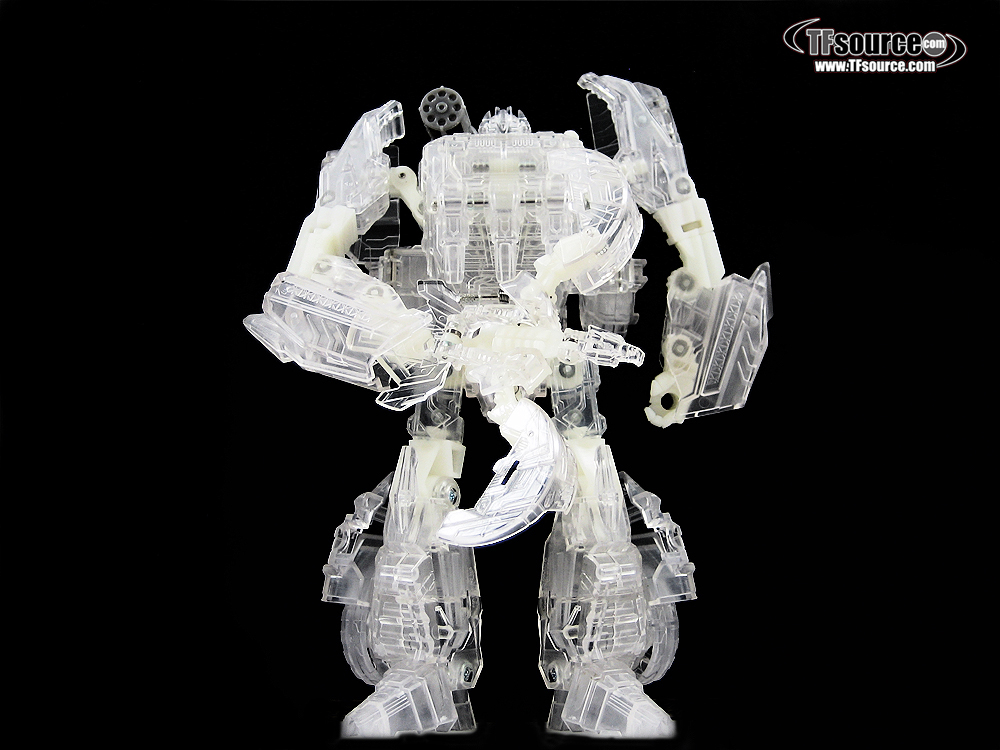 I gave up prototype collecting a long time ago, it seemed like a never-ending, expensive and cost ineffective endeavour. Plus the OCD in me would never have been able to handle having part of a proto (the unpainted G1 Cyclonus test shot with one arm nearly drove me insane) or part of a run. Recently, I acquired the above clear test shot of the Fall Of Cybertron Soundwave and Laserbeak sculpt, an utterly glorious artifact whose origin may or may not be authentic. I am reminded of the origin of the phrase “Lunchtime Specials” (I love you, Crazysteve) and the reissue exclusive in-house items that Takara employees were allegedly offered.

I was also reminded of how addictive it is to buy your favourite sculpts in fancy pre-production rainbow colour schemes, clear or plain white decos. Dangerous fruit indeed, this area of collecting has not gotten any cheaper since I’ve been away from it. It does seem to have retreated even further into a cornered niche of the collecting fandom though. The number of collectors who can seemingly drop 4 figures on a rare prototype or test shot appears to have drastically reduced, a definite sign of the times.

“Has sent me aimlessly, On foot or by the help of transportation
To knock on windows where, My friend no longer live, I had forgotten” 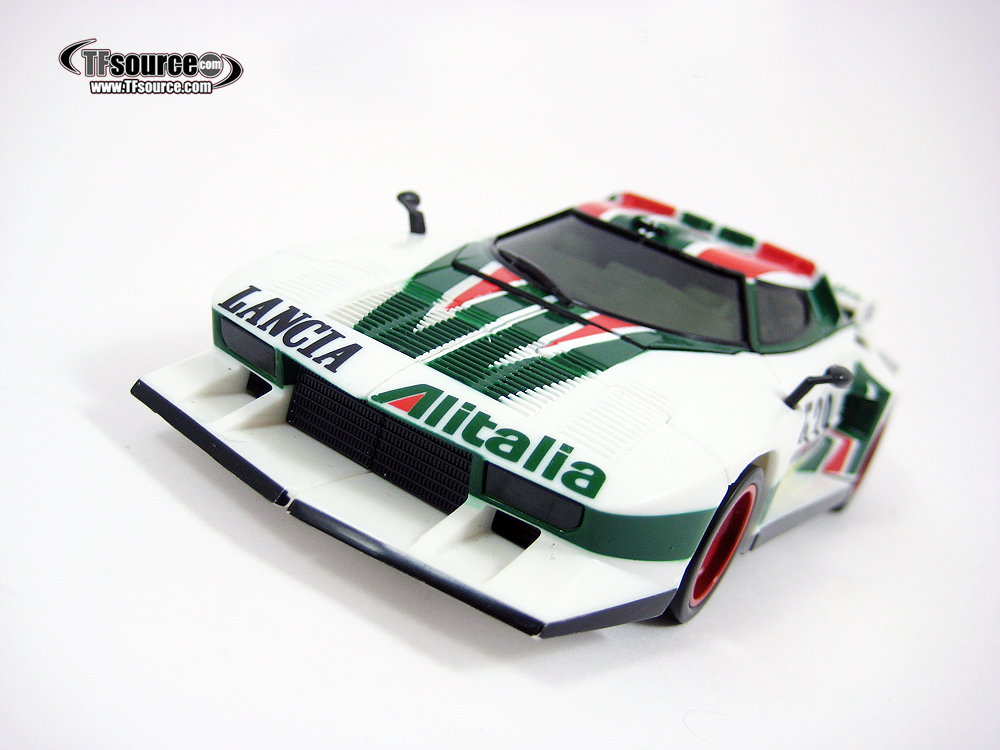 As much as I will look at old photos and remember how the collecting scene may have been – fondly or otherwise – there’s no question that choice and quality have never been so much in abundance as they are now. Even if many collectors have switched focus to 3rd Party, there’s still plenty of outstanding official product to look forward to as well. The Masterpiece Wheeljack I’m ending this article on is simply the best thing I’ve bought from Takara in the last 4 years. It stands above all the other MP cars in that I can’t put it down, and I don’t need to clear the evening’s schedule to transform it between modes a few times. Wheeljack and its repaint, MP-23 Exhaust, will tap into the G1 cartoon and Diaclone heritage together with the best of modern Transformers technology and give us what we would not be able to dream of in the late 90s. Reissues were great, Animated was great, but the degree to which official (and occasionally unofficial) product like MP Wheeljack wows me now on multiple levels, I’m not sure I have experienced before. 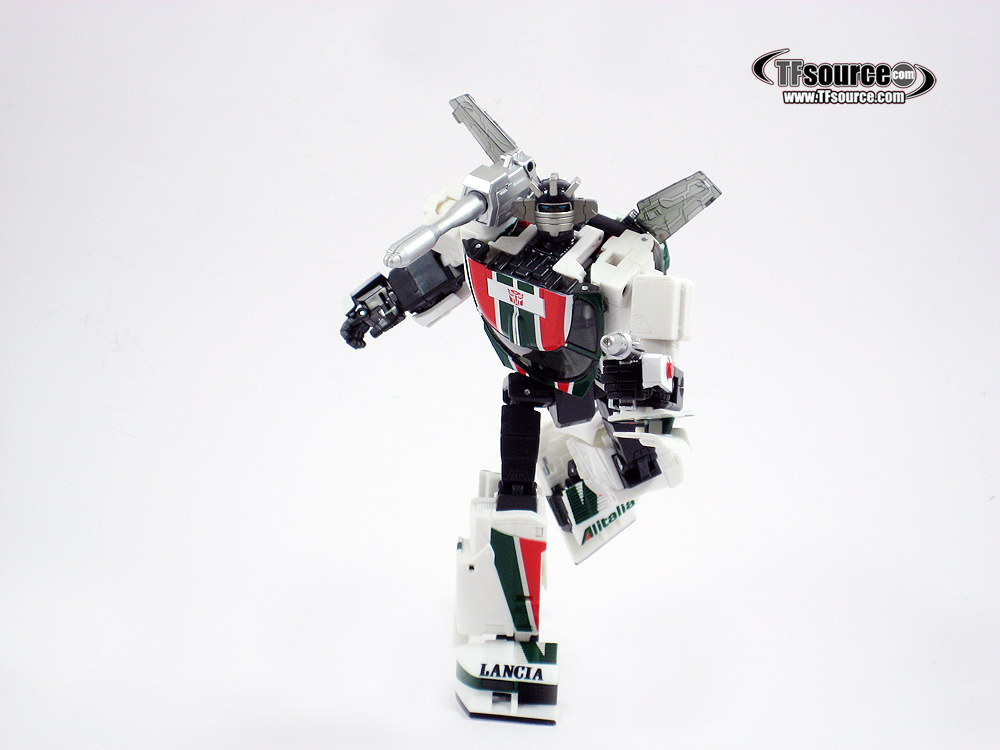 Thanks to Paul Hitchens, Himawari and Rickie Monaghan for pictures from a bygone era.