The Top 10 (Plus Some) Collector’s Club Figures 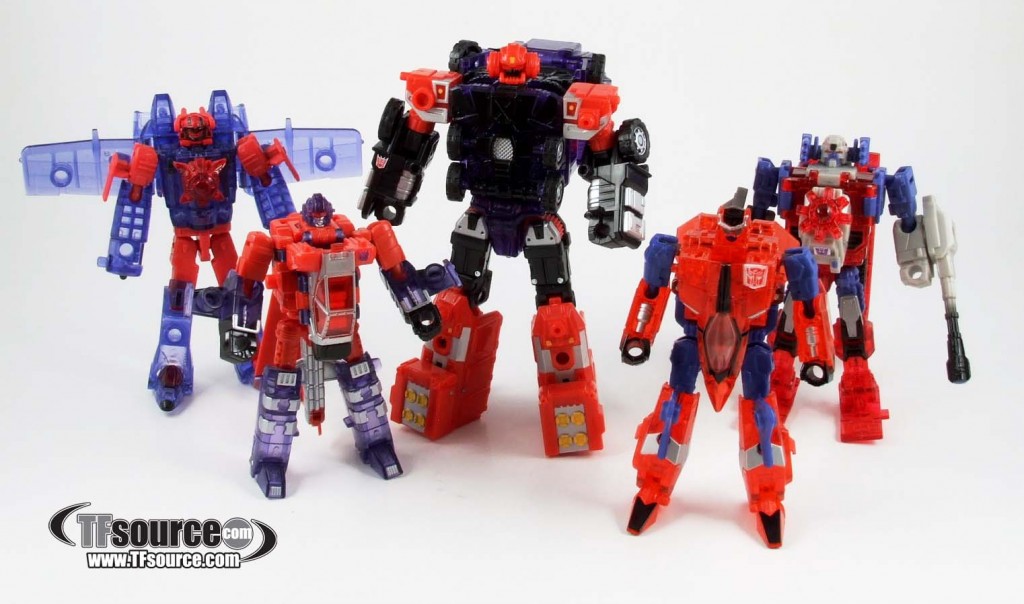 For over 10 years now, FunPublications has held the Transformers Collector’s Club license and have produced dozens of toys as Club Store Exclusives and free membership incentive figures. We’re taking a look at the best Club figures released to this point (not BotCon affiliated toys … that’s another list). Taking into account mold choice, representation of the character, and overall execution, here’s the top 10 (plus some more, I cheated a little) Transformers Collector’s Club Figures. 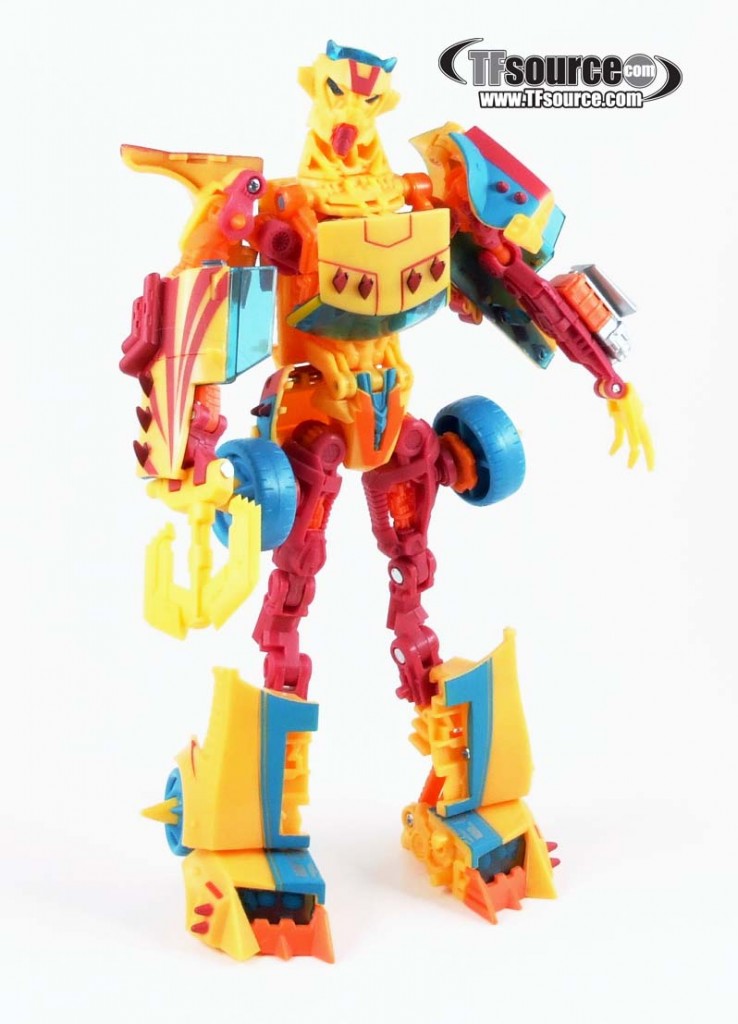 Circuit was in the top 10 initially, but a recently released Subscription Service figure bumped this absurd, colorful, hideous, yet completely awesome figure right on out. Sorry Circuit, but you still get the honorable mention. 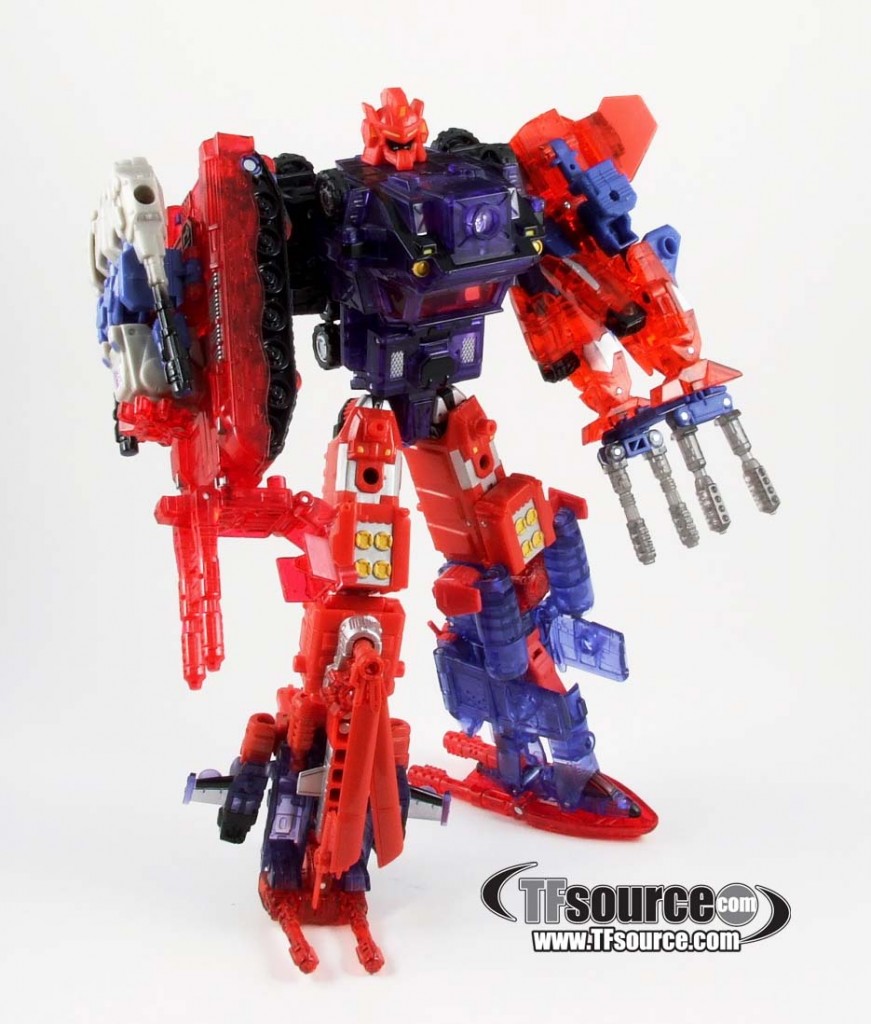 One of the Thirteen.

I’m cheating here since Nexus Prime is comprised of 5 figures, but the combined form of this team is the only way to go. Not a great toy by any means, it’s the character that puts it into the top 10. This team was the first set of Collector’s Club freebies offered to Club members when FunPublications took over the license. Nexus Prime is even recognized by Hasbro as one of the original 13 Transformers. There’s been a few original characters created by the Club making this toy more appealing, Nexus Prime remains one of the best overall. 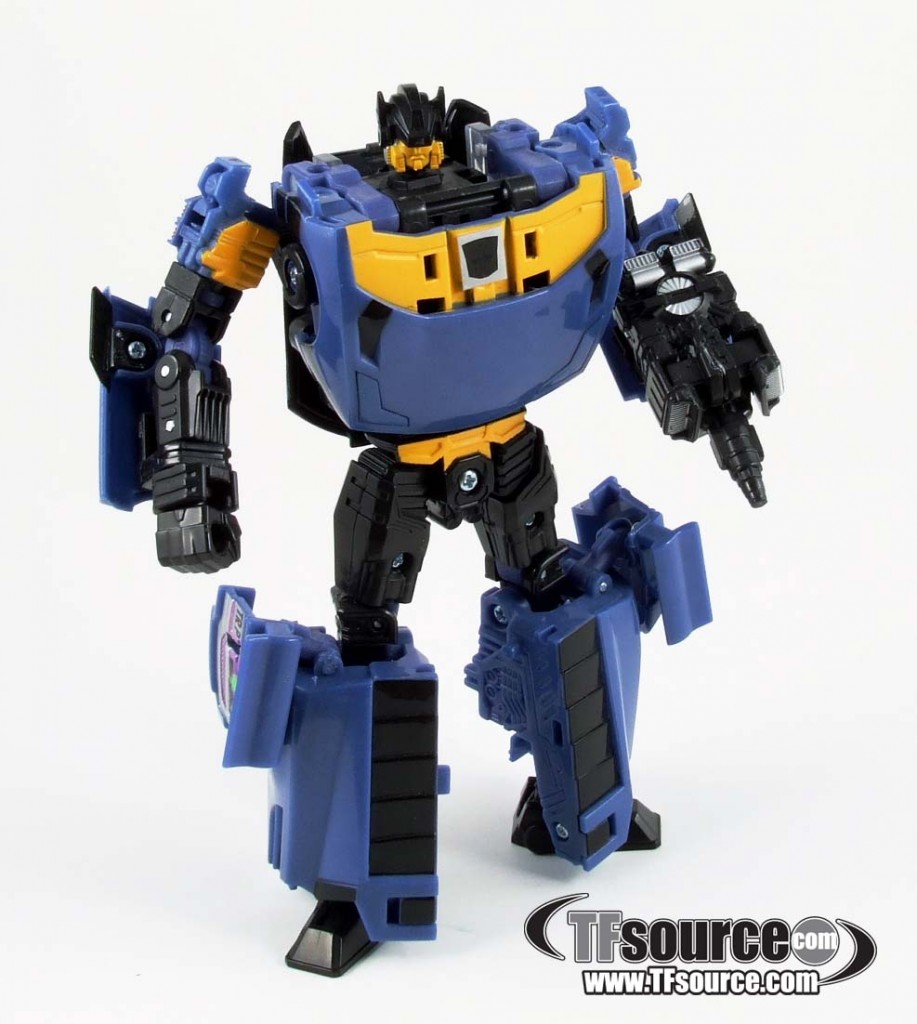 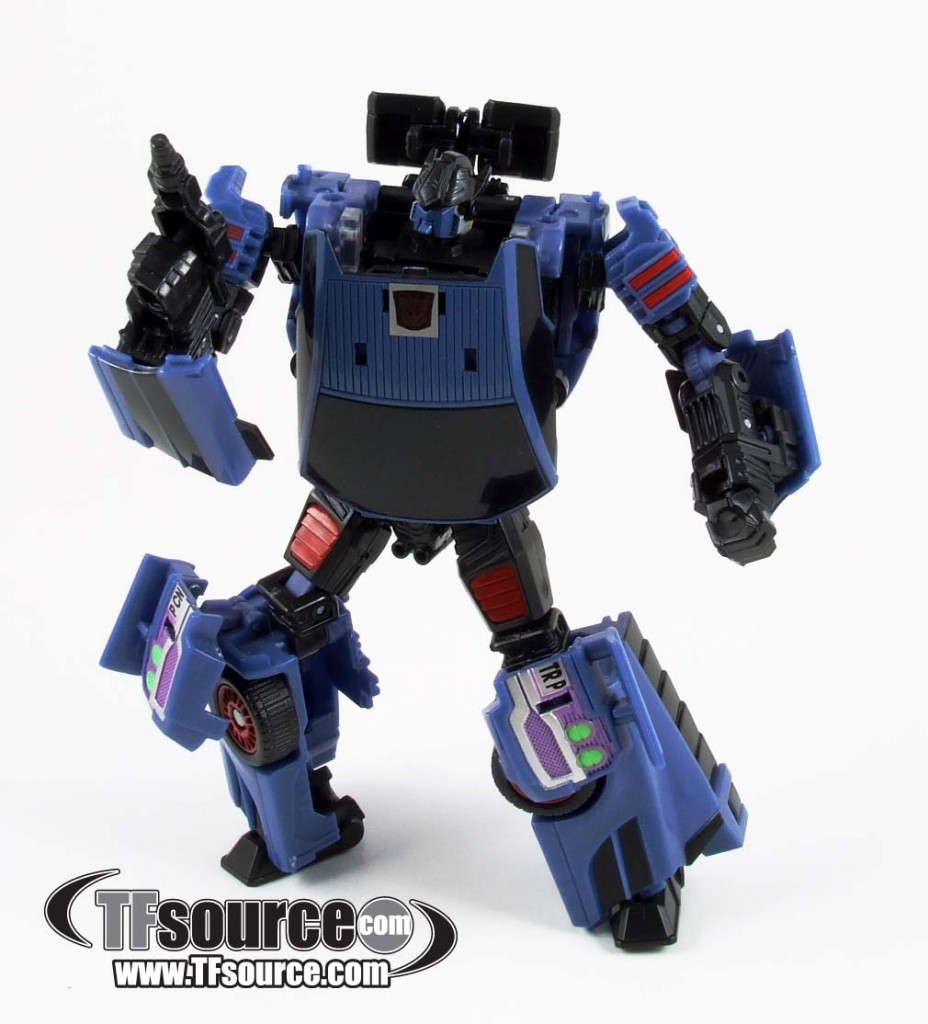 This double agent SHOULD BE much higher on the list, but ultimately drops all the way to number 9 due to the small head designed by the Club (yes, it puts that much of a damper on this figure). Utilizing the popular Lambo brothers mold from the Universe 2.0 toy line ( Sideswipe and Sunstreaker), P/CP maximizes the molds full potential by using the double transformation to create this 2-in-1 toy. Despite being nearly an instant sell out, one that generated two production runs of this toy, both fans and the Club themselves hope P/CP can be revisited someday. 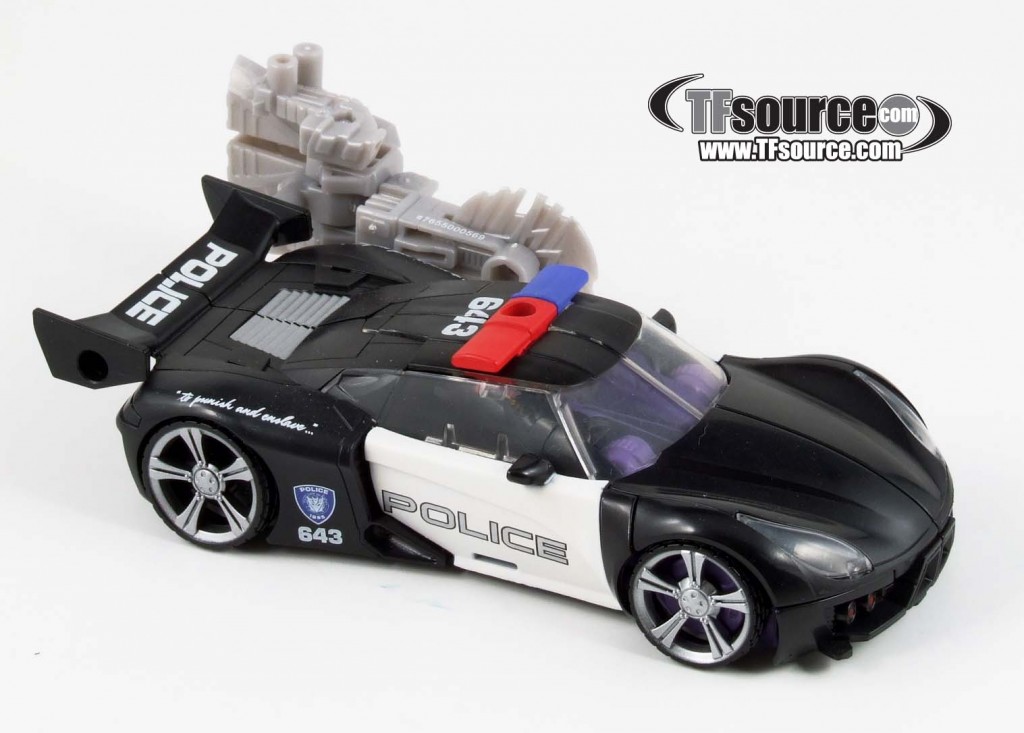 “To punish and enslave.”

A TFSS 2.0 release, Barricade with his Arms Micron partner Frenzy combines a mix of Transformers eras that seem to fit all too well into this toy. The Decepticon cop, Barricade, made his debut in Transformers (2007) to much fan appeal; his motto “To punish and enslave” still is a nerve chilling phrase. Combine the movieverse character with a more cartoonish body from the Transformers Prime toy line (deluxe class Smokescreen, a very underrated toy) and you have the combination of a winner. The attention to detail, details that stay true to the Barricade character, makes this a figure you should pursue. 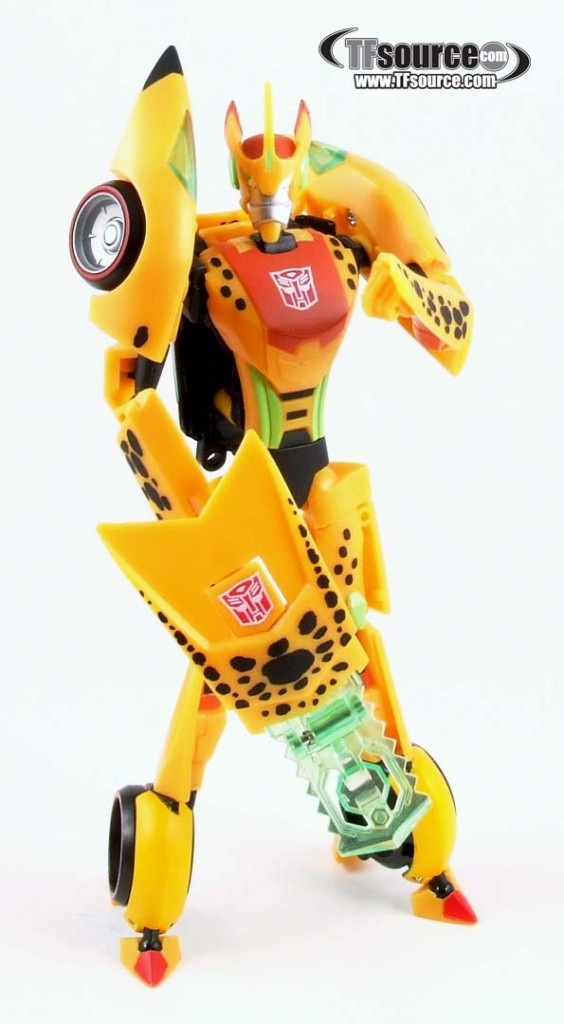 I really do wish this toy was more well received by the fandom. This figure takes a well known Character in Cheetor, one of the best Animated deluxe class molds (Blurr), and combines the two for a toy that just makes sense given the mold’s streamlined appearance. The headsculpt is lacking some paint details, but the lanky body just fits Cheetor’s personality perfectly. You might need to be an Animated fan to fully appreciate this toy, but even then this toy is well worth the price of admission. 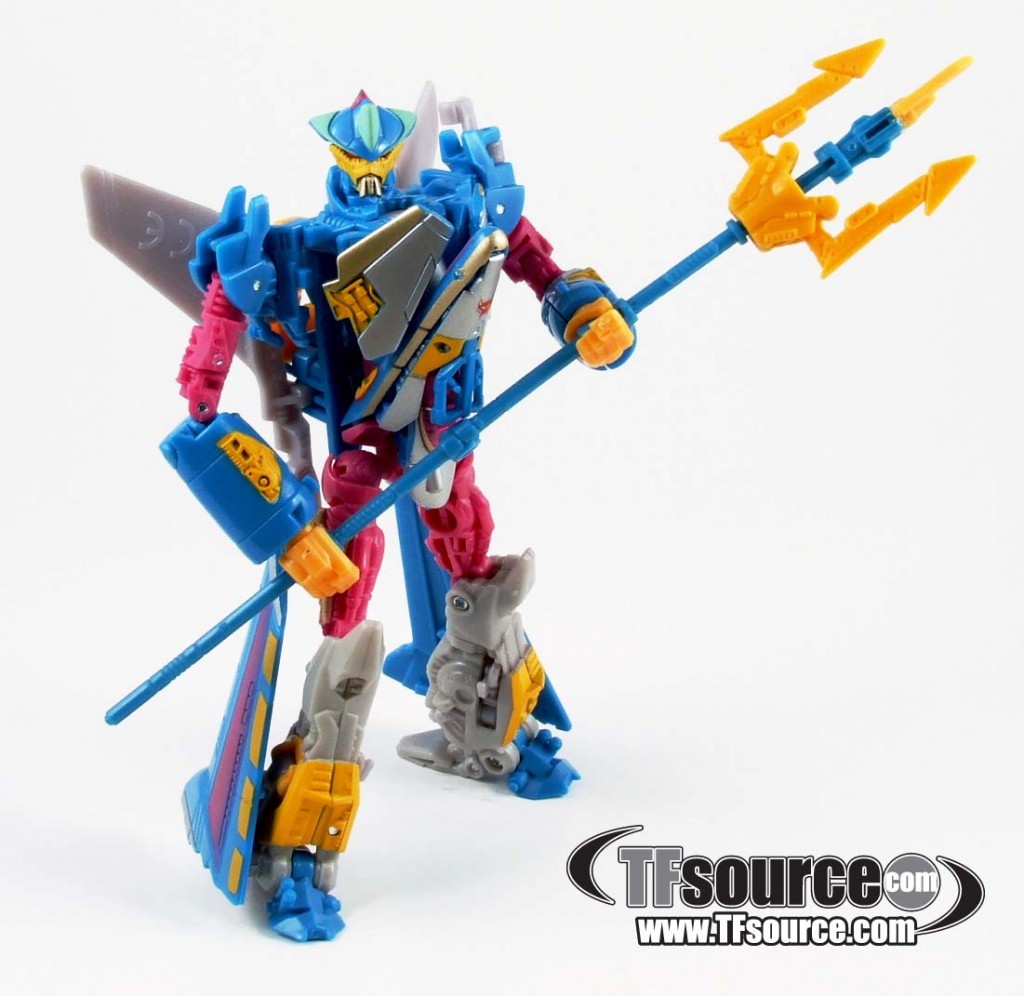 Depth Charge was the Club Freebie for members and also released on a deluxe card at BotCon 2013, which was a first for Transformers Club exclusives. Depth Charge earns a spot on this list by using a terrific mold (Deluxe Terradive) and combining that mold’s alt mode with a unique character form in Depth Charge’s flying manta ray space cruiser … thing. It’s a good example of the Club combining existing molds with characters that fit. If this one is needed he can STILL be found for super discounted rates. 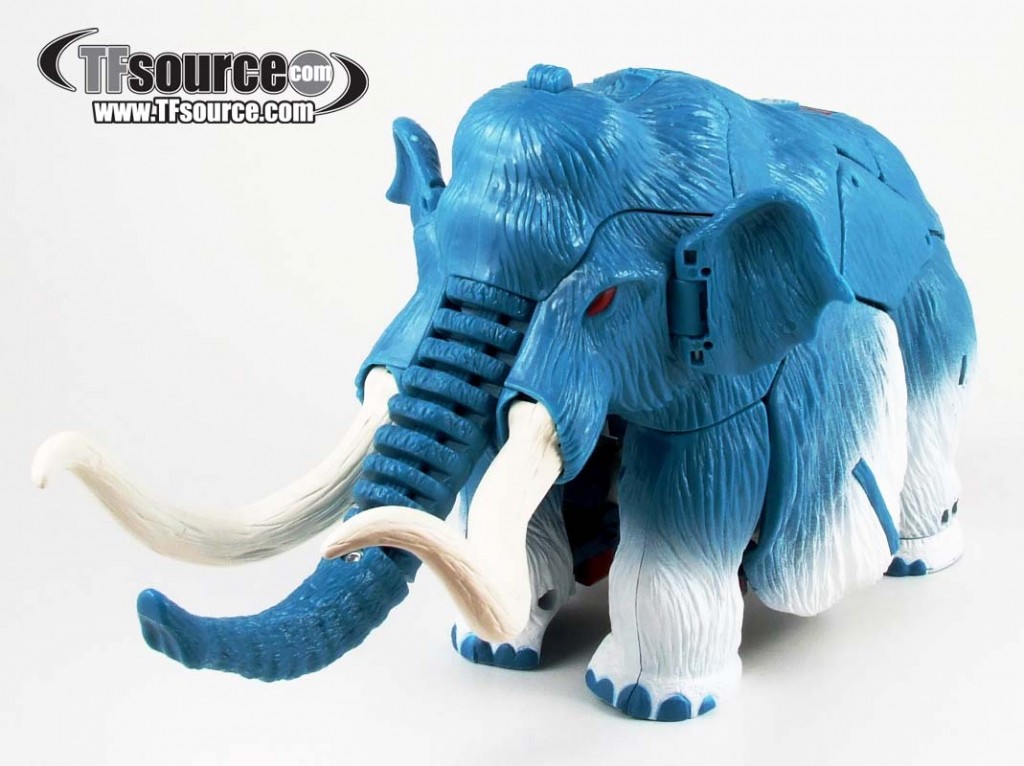 Similar to Animated Cheetor, the concept of Ultra Mammoth just makes sense. What makes this toy great is a combination of a few things: Ultra Magnus, Beast Wars, and a Japanese Beast Wars Neo mold that saw little exposure in North American markets. The figure in hand shows off an awesome blue and white deco, one worthy of keeping in beast mode to showcase it off in full. Ultra Mammoth can absolutely deal with this (…I had to throw that in there). 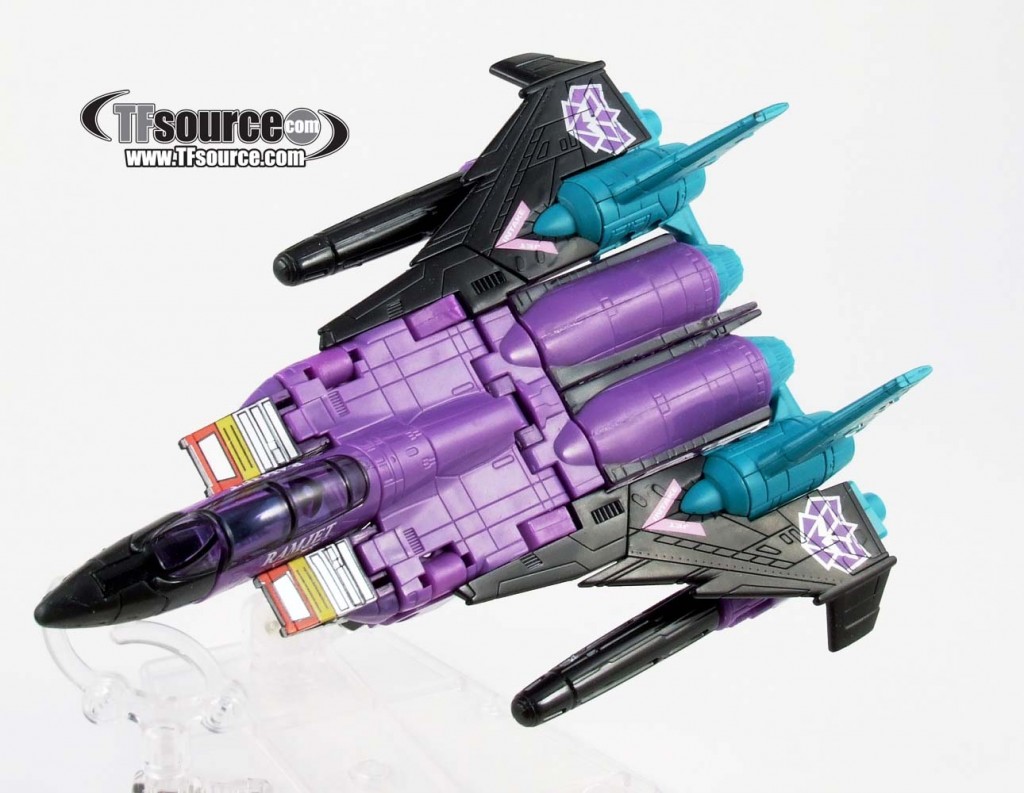 Utilizing the Classics Seeker mold and homaging a Generation 2 toy, G2 Ramjet is just bizzare and nostalgic enough to make you like it. The greatness of this figure may be as simple as it being another Seeker to add to your collection, which despite how overdone it may seem still is a cool thing to collect. Add a wacky G2 color scheme to it and it becomes very hard to not at least appreciate the concept. 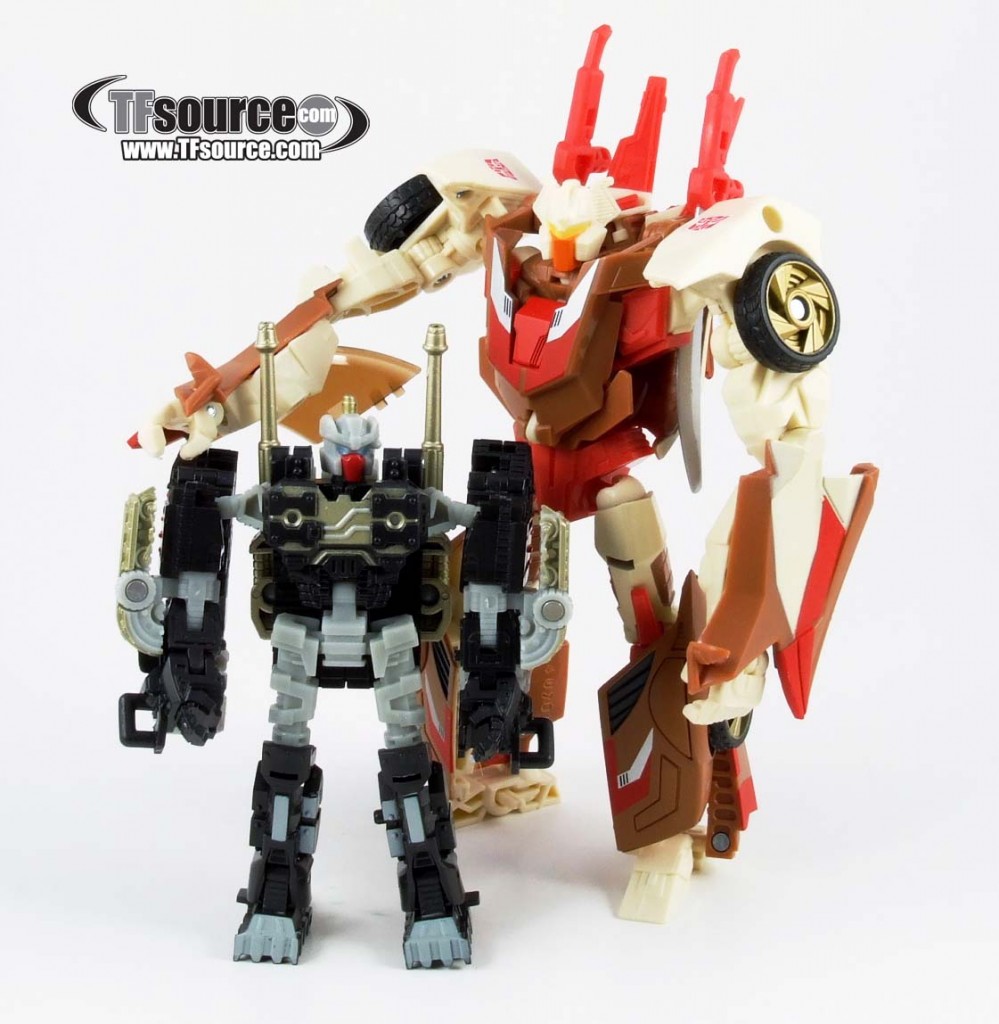 Chromedome, you are the reason Circuit got pumped out of the top 10, but deservingly so. Chromedome’s popularity has steadily increased thanks to James Roberts’ portrayal of him in the comic series More Than Meets The Eye; the Club was right to bank on that popularity. The concept uses the Transformers Prime Wheeljack mold, which works surprisingly well. Despite a few characteristics missed due to the limitations of using a specific mold, the Club designed headsculpt is just stunning. Pair Chromedome with his Conjunx Endura Rewind, and this is yet again a pair of figures not worth missing out on. There are arguments to be made that some unofficial figures representing these characters may be better toys than these two, but these two Club toys are a good representation of the IDW material the Club was aiming for, despite the limitations they have with mold choices. 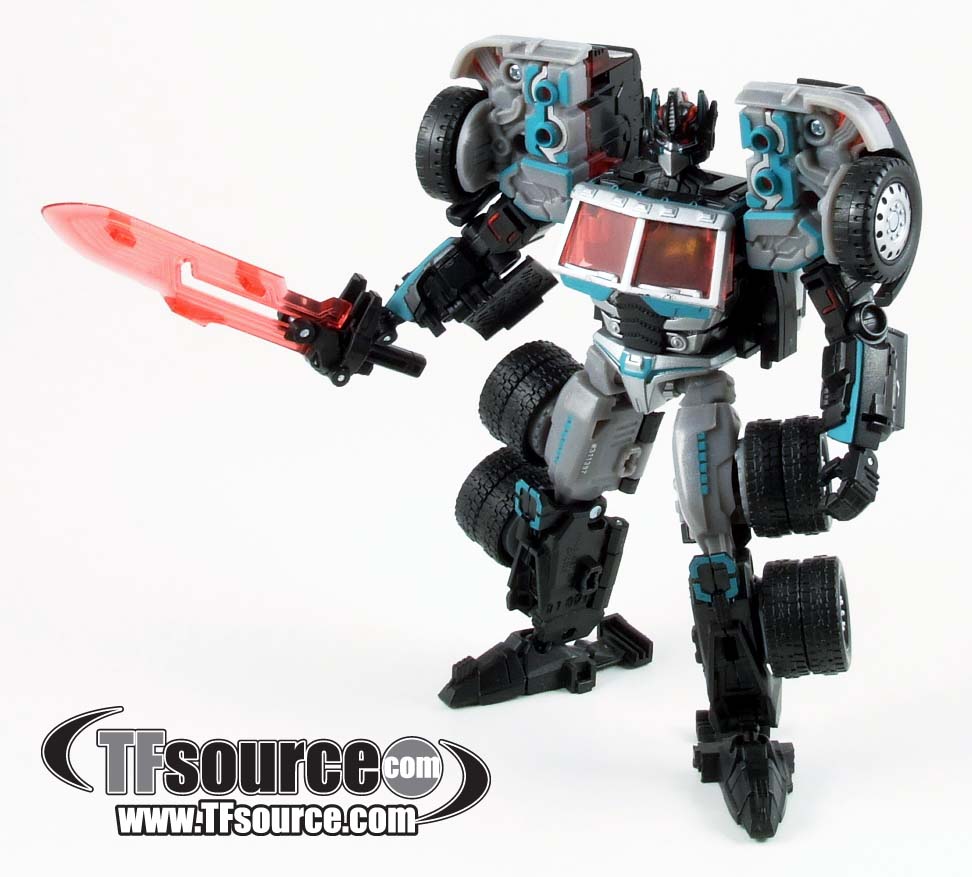 A more than worthy black repaint.

One of the most popular characters to emerge from the 2001 Robots In Disguise series, an updated Scourge is just what RID and “Classics” fans have asked for. The original Scourge toy from the RID toy line was a redeco of Generation 2’s Laser Optimus Prime. When the Transformers 2010 toy line released its updated G2 Prime, transformers collectors immediately started calling for a Scourge redeco. The Club delivered with this release, the showcase piece of the entire Subscription Service thus far, and one of the best Club exclusive toys you’ll get your hands on. 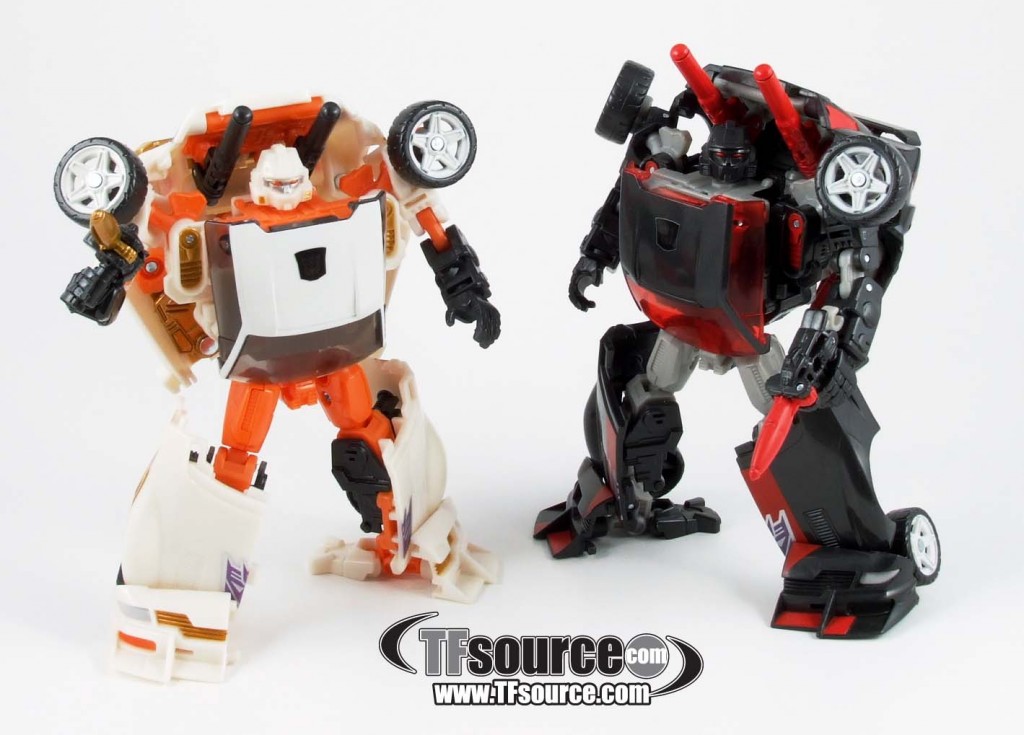 I’m not sure how well this is going to go over, but the top of this list belongs to Runamuck and Over Run (aka Runabout)! Produced in 2012 by the Club as both a free membership figure (Runamuck) and Club Store Exclusive (Over Run), these two figures combine one of the best deluxe class molds Transformers collectors have ever received with two Generation 1 Decepticons that get little mainstream love: the Battlechargers. The figures represent a perfect mix of maximizing a mold’s potential and combining it with lesser-known characters, something the Club is essentially forced to do while working under Hasbro. Although they’re not the best characters on this list, the best Club toys they definitely are.

There you have it, the top 10 (plus some) Transformers Collector’s Club figures released to this point. The list will continue to be changed and adjusted, as the Club shows no signs of slowing down given their upcoming Club Store exclusives (Nova Prime and Marissa Faireborn), membership incentive figure (Leo Convoy), and the entire lineup for the Subscription Service 3.0 (Krok, Nacelle, Tarantulas, Carzap, Serpent O.R. and G2 Starscream). So, where did I get the list wrong? Right? Hit up TFsource on Facebook and Twitter, or chime in at me directly on Twitter. In the coming weeks I’ll be taking a look at third party/unofficial products that have changed the way we collect!

This entry was posted in Source Articles Tagged with Collector's Club, Countdown, TCC

The Top 10 (Plus Some) Collector’s Club Figures