Before I go any further, a disclaimer. The content of this article series is purely my opinion, not stated as right, wrong, nor as representative of the general feeling within the collecting community. In fact I doubt I’d find even one collector who would agree with all my choices. With that out of the way, here’s my verdict on Transformers Animated’s top toys in the Legends, Activators, Deluxe, Voyager and Leader classes, as well as best series episode, best transformation, best repaint and original concept feature. In the last few months I finally watched the episodes I had missed first time around and collected every toy mould released within the aforementioned classes, including pretty much every repaint and a number of bootlegs so I hope that qualifies to me to pass some sort of judgement. Here are my results! 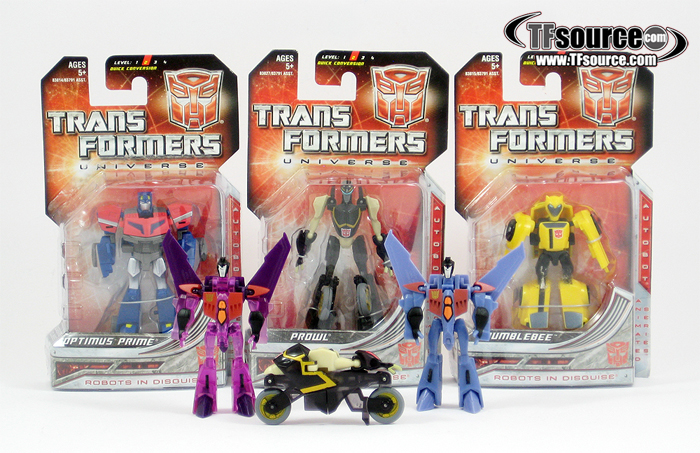 Straight into a tough decision, even when there are only 4 legends class Animated toys to chose from! Starscream, Optimus, Bumblebee and Prowl are all remarkably intricate, posable and about as show-accurate as one could expect from something so small and inherently compromised as a tiny transformer. Show accuracy is actually what wins it for me here, and while Bumblebee is gorgeous and comes with a red Autobot symbol on matte yellow paint job on one particular release, it’s Starscream that takes the honours. There is so much character and show accuracy – as well as a pretty involved transformation – in that tiddly figure that it stands out. All those exclusive Japanese clear repaints were enormously painful to buy but one can display quite the armada. 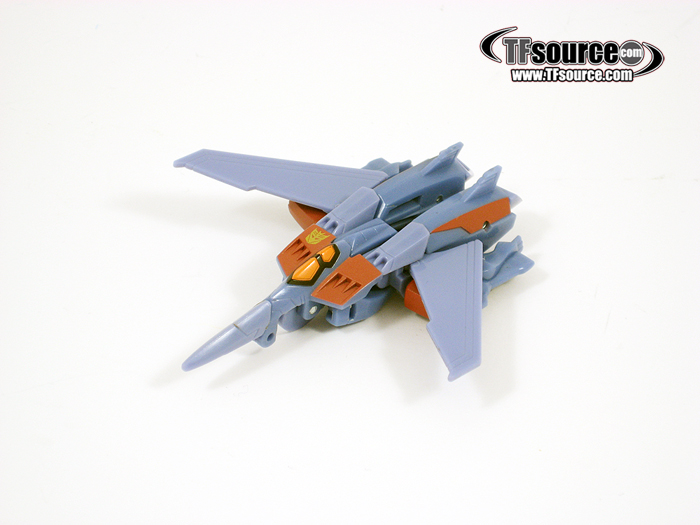 The most screen accurate Animated Starscream? 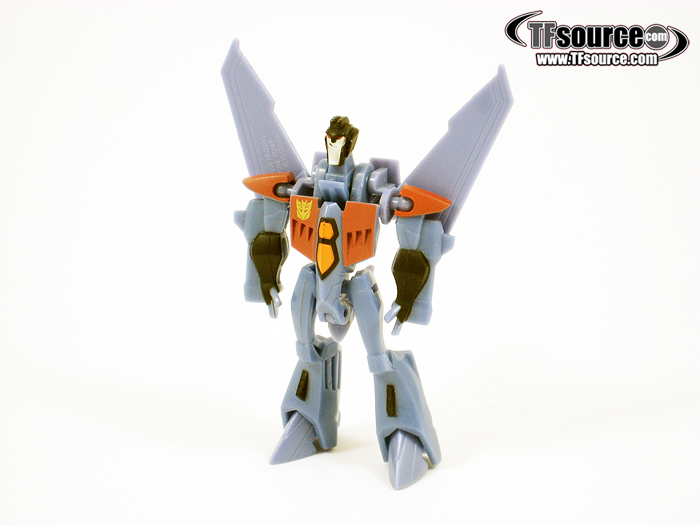 It’s funny that with four moulds and such diminutive nature, the legends class of Animated figures can present the least value for money and the biggest headache to complete. All four moulds have either one special repaint, a semi-clear version and then an all clear version. The jet repaints can be quite hard to acquire, I was lucky and got them from a seller in one go but even then it came to over $100 for all six. Compare that to what one can get in the Activators or deluxe class for the same outlay and it’s little wonder I’ve seen few complete Animated legends collections.

The TF Animated Activators were a revelation because I had assumed they were a distraction for children, a cheap substitute for a deluxe/voyager with a mildly entertaining gimmick. While Bulkhead and Optimus don’t do a great deal to dispel that perception of unnecessary extra expense on top of deluxe/voyager/leader, Activators like the Bumblebee mould, Starscream mould, Soundwave mould and Ratchet push this class of figures into the ‘entirely necessary’ bracket. For a start, the Activators Bumblebee scales better with the deluxe characters, and the flip gimmick on ‘Bee, Ratchet, Starcream et al and Soundwave is fantastic. You can literally sit there and repeatedly flip-compact-flip-compact. 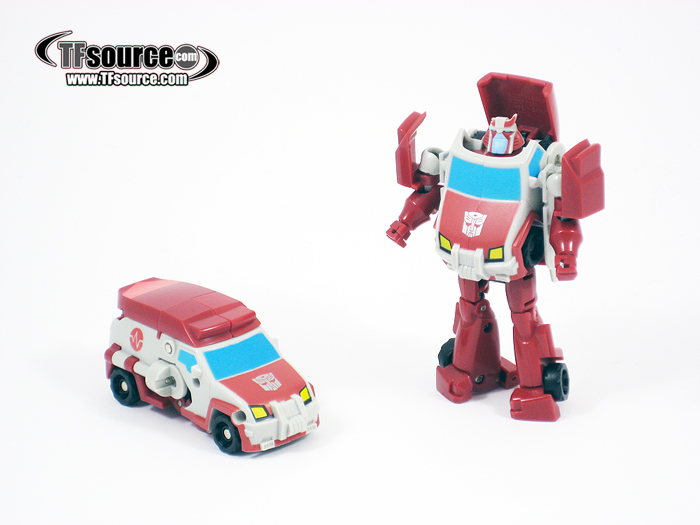 Better than many flip-changers (and a few deluxes)

Let’s not forget that characters like Ramjet, Cliffjumper and Thundercracker were only available in this form. Again, Bumblebee and Soundwave come very close thanks to their lovely proportions and near complete transformation from the flip, but I’ve gone with Ratchet because he has actual hands and arms instead of panels to go with terrific show accuracy, and not a whole lot to do after the flip gimmick has been engaged. Optimus looks brilliant in robot mode, but it may as well just be a regular TF for all the steps you need to carry out after the flip. Ratchet just needs the feet opened and that’s it. 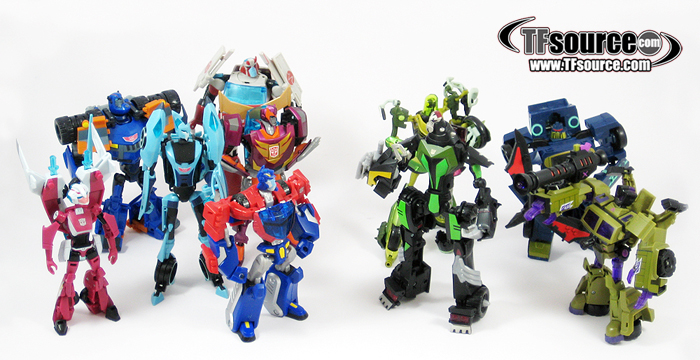 Officially the hardest choice of all, because there is so much choice. TF Animated is responsible for elevating the humble deluxe above its voyager and leader contemporaries, demonstrating just how much can be squeezed into a toy at this price point. Combining unforgettably good transformations, jaw-dropping show accuracy, good paint application, imagination, huge displayability and variety across such a wide range of releases means that this is the standout category for Animated figures. That’s saying a great deal when you look at the quality of some of the amazing voyagers and leaders we received during TF:A. Cybertronian Mode Optimus Prime is equal parts heroic and ingenious with a highly repeatable transformation, while Lockdown is a marvel in how it goes from a regular-sized deluxe car to a towering voyager-topping robot mode using a wonderful and intuitive transformation sequence completely free of frustration. Those hands though… 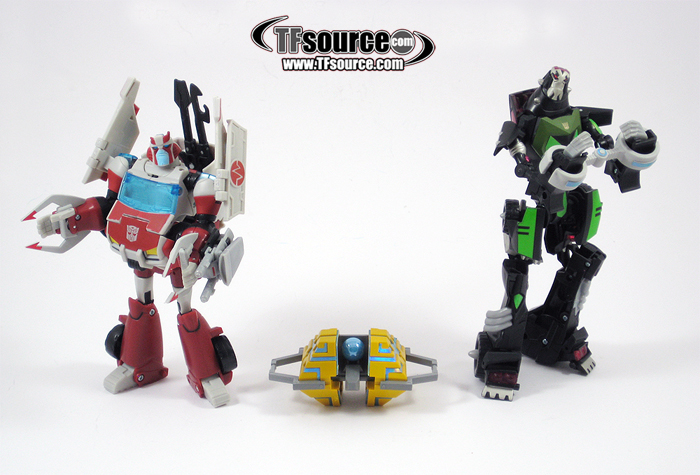 A lot of collectors cite Prowl as the remarkable deluxe from the line, and as much as his ability to take a motorcycle and turn it into a symmetrical, lithe robot that is perfectly show-accurate is stunning, I always found posing and transforming him laborious and frustrating, even though both modes are lovely. I would rate Swindle, Sentinel Prime and Oil Slick above Prowl for transformation just as three examples out of many, Swindle still beats Prowl on toy character, stability and fun, whereas Oil Slick’s stability and posability – as well as his bizarre looks – make him more memorable to me than Prowl as a toy. Rodimus and Arcee score very highly on all counts too, both being very enjoyable to transform and looking spectacular in both modes. Arcee has the problem with the stressed plastic for the hands and the cheap-feeling wheels, and Rodimus has man-legs which hinder his stability whereas his upper robot half and full vehicle mode are nothing short of perfection. An often overlooked deluxe class success for TF Animated is Ratchet. The transformation sequence is as good as anyone’s, show accuracy is nailed right on and his robot mode proportions are really excellent, it’s just his feet that can cause some instability, but when you add the Unicron.com magnets and slap on Lockdown’s EMP/engine, wow. 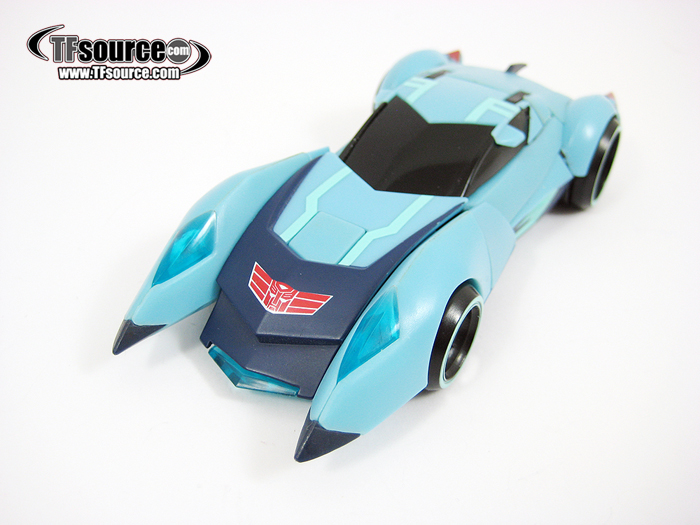 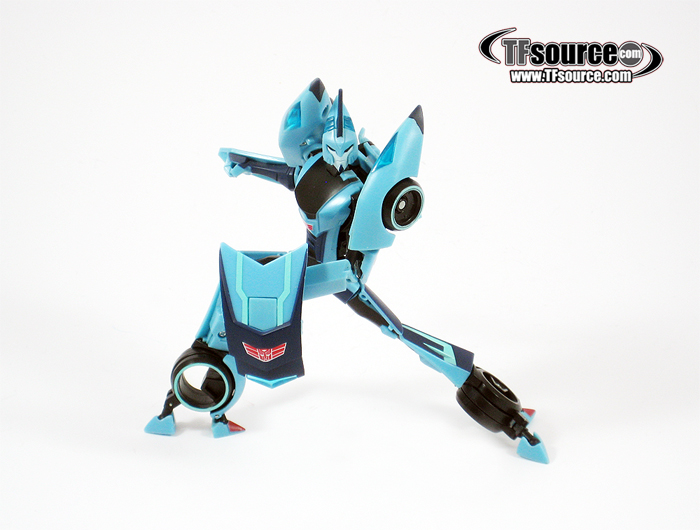 Above all of these superb toys, the best deluxe for me is Blurr. It’s just not enough to say that both his modes are beautiful, I don’t think there’s a word that does the aesthetic perfection of Animated Blurr justice. A quite incredible robot mode with excellent posability, stability, proportions and style coupled with a vehicle mode that blends Tron with Transtech Cheetor. There may be a lot of tabbing in the transformation but satisfaction is also a key factor, and you get that with every completed conversion on Blurr. He’s positively regal in both modes and the winner for me, but then again there are about 5 deluxes in this category that could stand above most Transformers from any range. A king among kings. 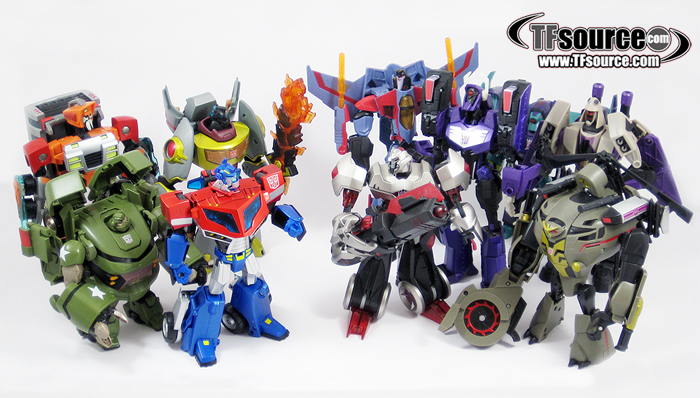 Lots of shorties, but lots of quality and ambition

Optimus Prime would be the obvious choice here, and it would not be unworthy as a winner because the toy is brilliant. Looking the part in both modes is a big deal, but I never liked the leg gimmick on this toy and the clip that holds the waist in place isn’t secure enough, meaning you can get extra rotation when you don’t want it. The axe-cum-trailer isn’t my favourote accessory either. Maybe the Wingblade version could be seen as containing enough extras to elevate it above the rest, but it feels like cheating. Having said that, Wingblade Prime is one of the most essential pucrahes from the Animated line, I believe. Blitzwing too is hilarious and full of character, but the transformation and – despite being a triplechanger – alternate modes are not quite good enough for me to label him as the best in class. Lugnut’s fun but too small with temperamental cockpit halves, Megatron is just not fun or pretty, Starscream is beautiful in both modes but the frustrating transformation and constant popping off of bits mean I can’t let it be the victor either. 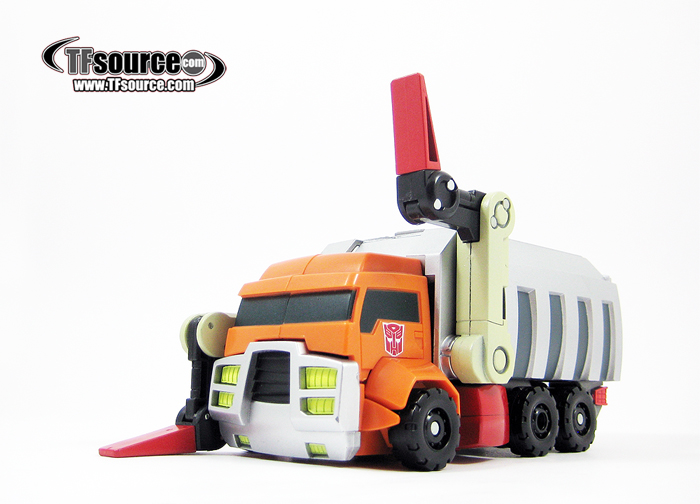 A rare occasion where the Takara paint job adds loads 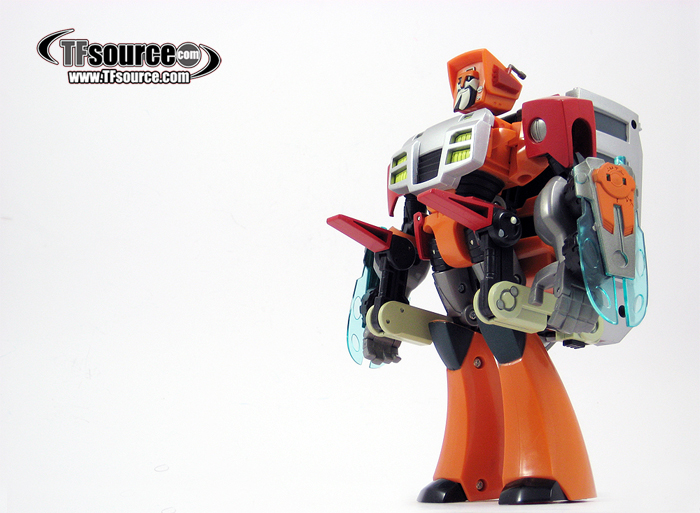 The contenders for me started with Shockwave, simply because he’s two robots in one, and the larger Shockwave robot is so glorious before the joints go floppy and unmanageable, but those alt modes are too non-distinct and I never use them. Blackout is utterly fantastic and a really simple-but-fun transformer with superb modes. I’d hate to choose him though as his exclusive nature might be seen as having influenced that, although his lack of head articulation is more of an issue. I also gave a lot of thought to announcing Bulkhead as the winner because its screen accuracy trumps that of the leader in vehicle mode, transformation is enjoyable and as a character he’s just awesome to look at, so very removed from the TF styles that have gone before. Maybe a shade too small, though – criticism I’d level at Blackout as well. My runner-up – if you can believe it – is Wreck Gar. Amazing robot mode and head sculpt, enjoyable transformation and excellent presence, together with the Takara Tomy’s gorgeous paint scheme. Attaching the accessories to his arms and the dumpster on his back just fills out his silhouette so well. 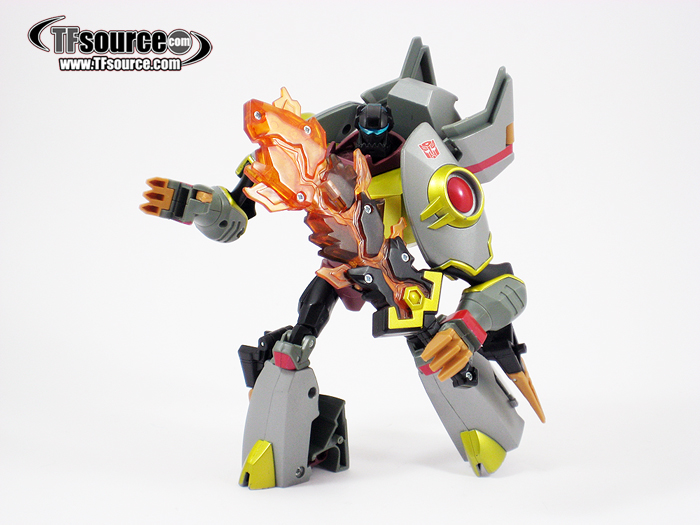 I know it’s not tabbed. I KNOW. 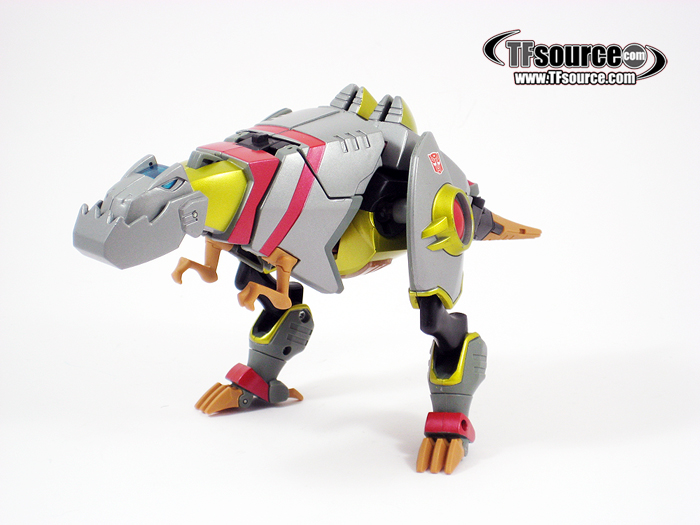 The winner, though, is Grimlock. I’ve never been a Dinobot fan, and I detested the G1 Grimlock toy. Then 2014 happened and Animated Grimlock, Scoria and Soar happened. I owned two Takara Tomy Animated Grimlocks at one stage, but even when I was handing over the extra to a friend who bought it, I couldn’t stop looking at it and picking it up. A toy that captures the essence of Grimlock and his Animated counterpart so perfectly with two excellently proportioned modes, hard-to-leave-alone transformation and a dino jaw gimmick that is far more entertaining than it should be for a grown man of 30-something. I love that flaming sword too. The unreleased Goldfire Grimlock production samples are something I dream of owning. 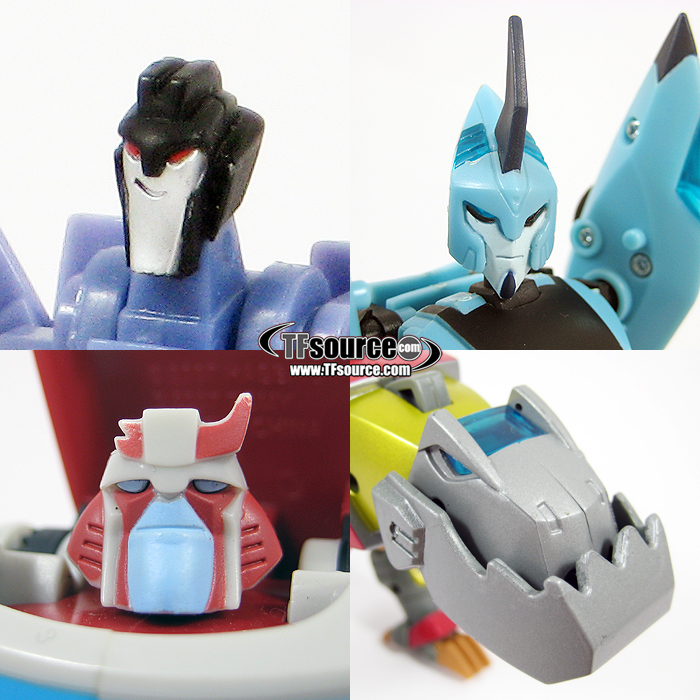 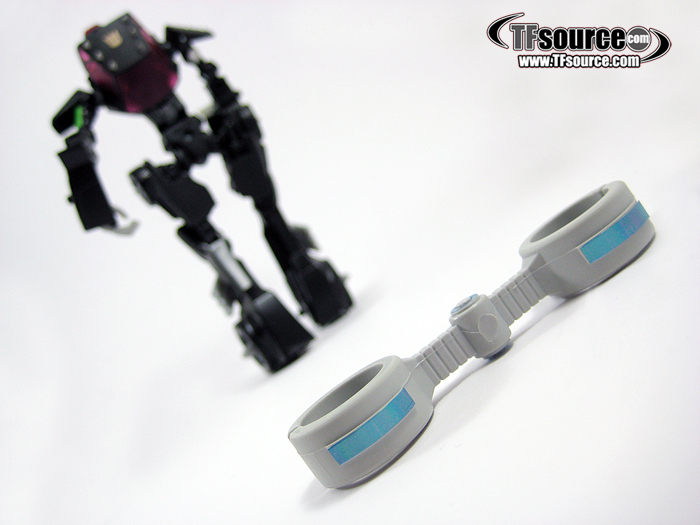