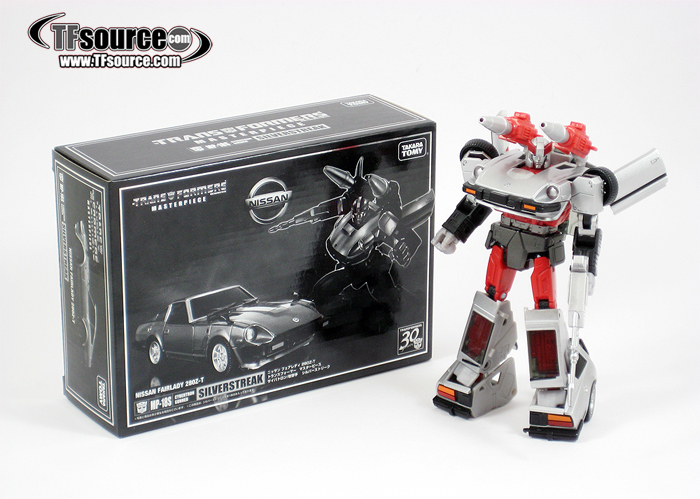 This time last year it would have been completely unthinkable that a Masterpiece Autobot car could come onto the market and fail to create the kind of ripples felt in the collecting pool as items such as MP-12 Lambor, MP-14 Alert, MP-17 Prowl or MP-18 Streak made, but MP-18S Silverstreak’s impact could arguably be described as gentle. It cannot even be attributed to the fact that it was a Tokyo Toy Show exclusive, because last year’s MP-12T Tigertrack seemed to be widely well received. It’s certainly not down to appearance, because in my opinion, MP-18S Silverstreak is the best looking Masterpiece car of the current crop until Wheeljack lands later this month. So what was the problem? 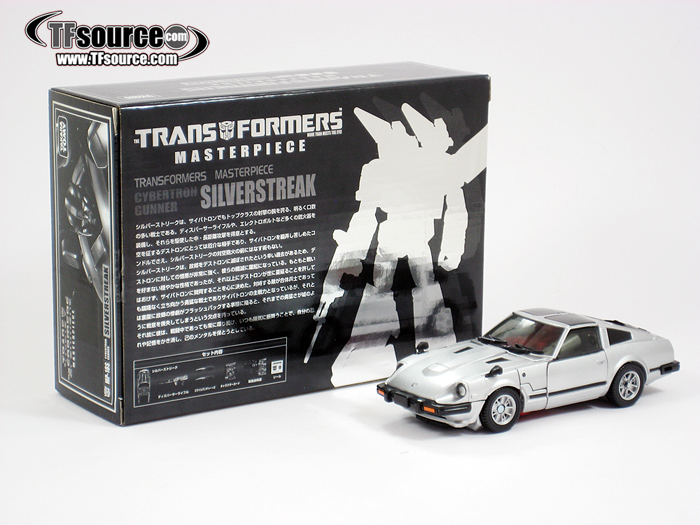 Being a show exclusive toy that inevitably found its way into the hands of Asian and import retailers, it would have cost collectors a tad more than the average new release Masterpiece Autobot car. Silverstreak is neither a show-accurate G1 figure nor a Diaclone homage which has its own special niche sub-category appeal. In fact, Silverstreak is based on the original Generation 1 Transformers “Bluestreak” colours, which did not have a cartoon/Diaclone black-hood. That makes MP-18S (S for “Silver”) the first toy-coloured Takara Masterpiece car.  For a toy line that is revelling in its popularity by bringing cartoon-accurate Transformers or affordable Diaclone repaints to the masses, where does a misfit colour scheme like Silverstreak’s all silver figure into that popularity? 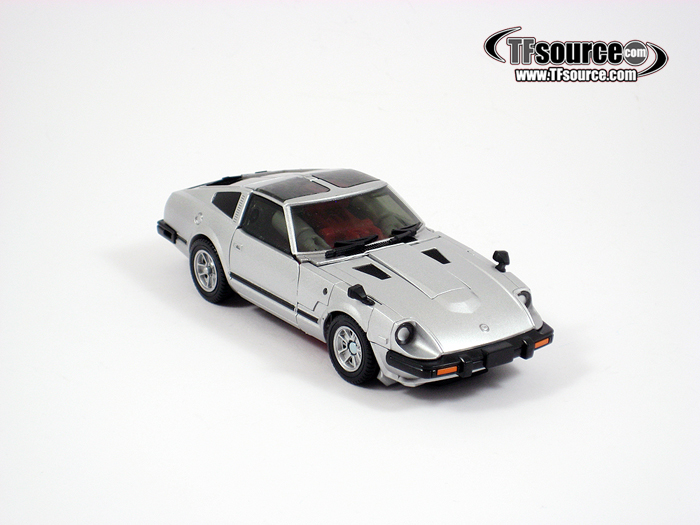 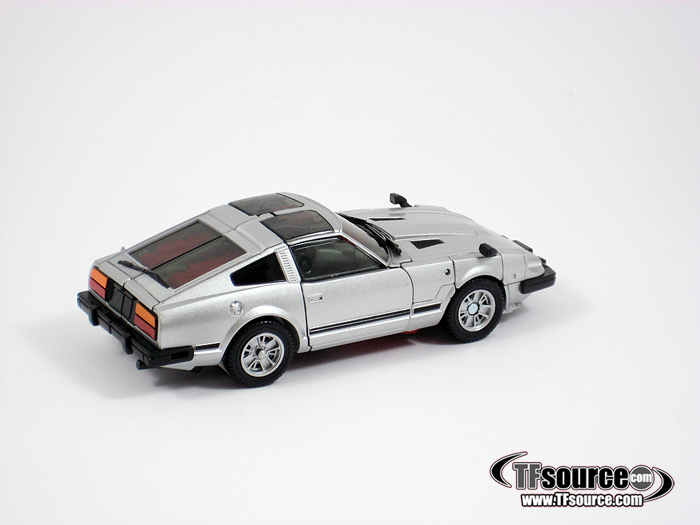 If I had to pick one MP car 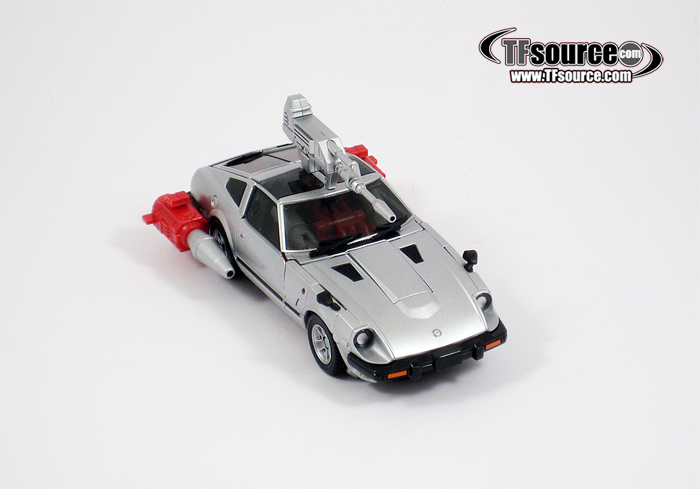 The Lamborghini Countach Masterpiece mould has already birthed 4 releases, the original Sideswipe and Red Alert which were highly recogniseable and popular show characters, Tigertrack that was a Diaclone homage and G2 Sideswipe that was quite a bit removed from the usual Masterpiece fare, in a good way. Completely unexpectedly, that’s been my favourite of all the Lambos when originally I thought it was a ridiculous idea. Third Parties have ramped up their releases and there seems to be something enormously desirable coming from every angle, be it Quantron, Scoria, Warden, Feral Rex, Intimidator, Soar, Hexatron, Orion, Dai Stack, Mania King blah blah. Money is tight, decisions and focus are key, and an eighth Autobot car from just the second mould with no show equivalent and a lack of unique character or story is a hard sell. 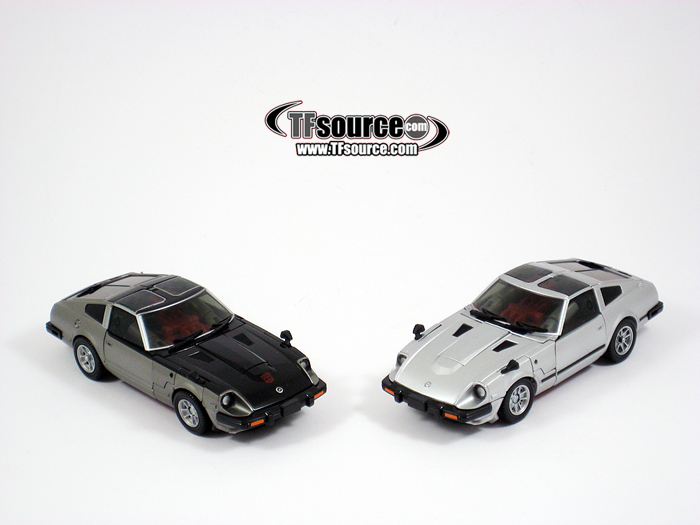 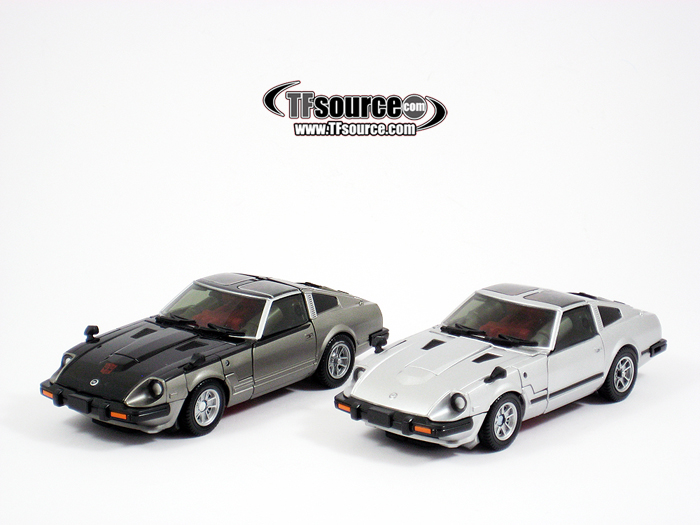 Combine the two for 100% screen accuracy

Maybe the main reason why the announcement of an all silver G1 toy-coloured Bluestreak – or “Silverstreak”- was greeted with a collective sigh, or in some quarters plain outrage, was that it wasn’t blue. In one of those cases where the assembled fandom stood together, held hands and just radiated their want with such intensity, and truly believing that it would influence events, instead of the fabled MP-18B Blue Bluestreak from Diaclone and G1-packaging fame, the complete no-brainer Blue Bluestreak that somehow managed to not get done as one of the reissue exclusives during the mid 2000s, we got MP-18 without the one feature that made it special, its black hood. The absolute laziest of the lazy exclusive, perceived by some to be a slap in the face, not helped by certain stores putting up pre-orders for an MP-18B Blue Diaclone Streak Masterpiece. Or at least that’s what we thought, then designer Shogo Hasui shared photos on Twitter and it all made perfect sense. 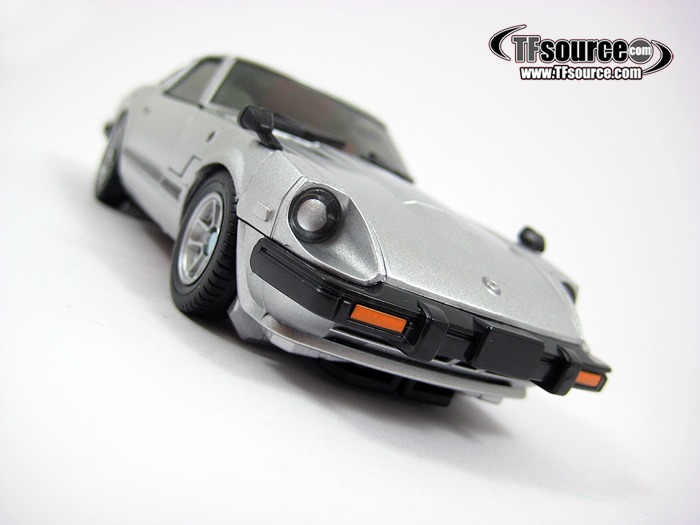 The one true Z 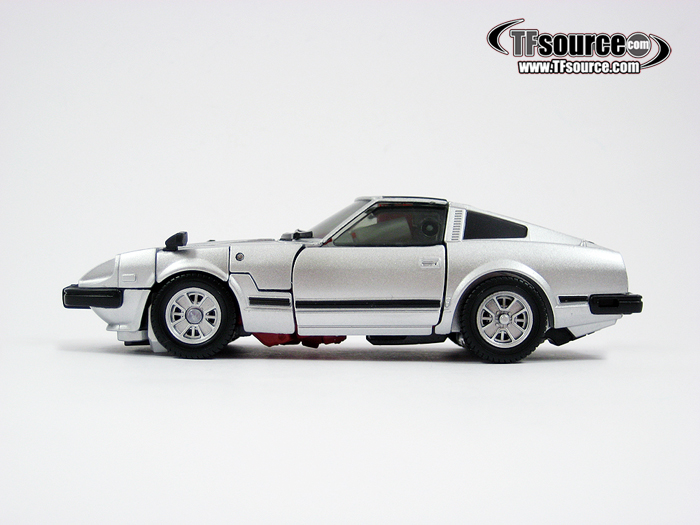 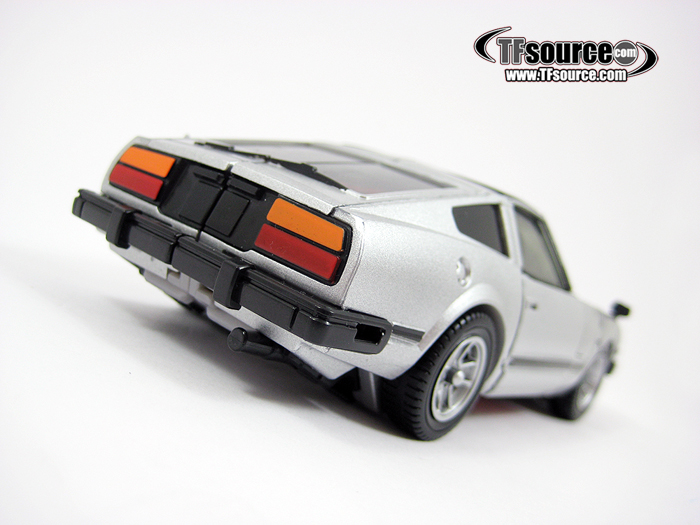 Simply stunning. A delicious metallic light silver all over, and quite brilliantly distinguishable from MP-18 Streak’s darker grey and gunmetal. Silverstreak astonishingly puts MP-18 in the shade, even though he’s a toy accurate scheme among a sea of figures that – and here comes a fan favourite – “stepped straight off the screen”. Somehow, despite my adoration for the screen accuracy of the ‘new’ Masterpiece, I’m finding myself more drawn to Silverstreak and G2 Sideswipe than any of the others. For anyone who thinks Masterpiece 2014 has been the weakest year of the line, I’d fight this corner tooth and nail. Wheeljack will cement 2014’s vintage year status, just you watch. 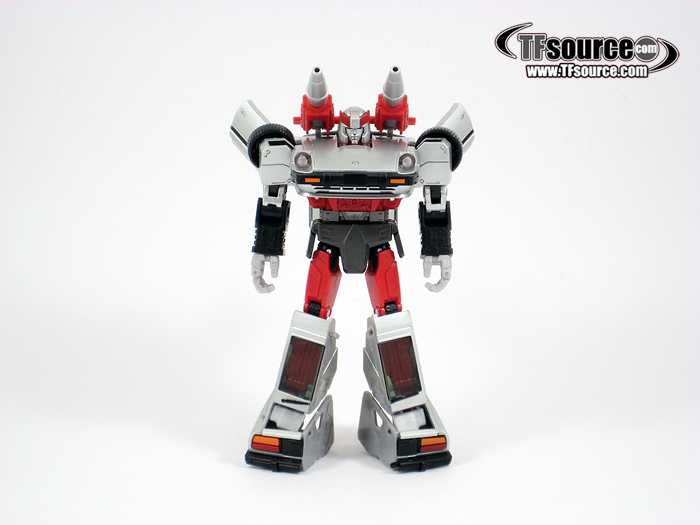 The most commonly released colour of the G1 Fairlady 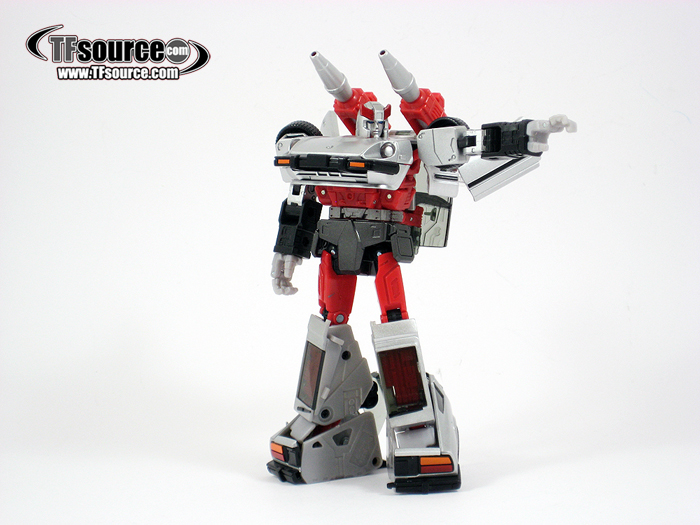 Back to Silverstreak, despite being released in a colour scheme that by far is the most representative of this mould in the history of Bluestreak (Transformers in US, Canada, Japan & Asia, UK, Mexico and Trasformer pre-TF in Italy) compared to the relatively limited, short-lived and rare blue and black-hood versions, and containing two toy-accurate red launchers that don’t require an Amazon.co.jp purchase or add-on set nudging up the nostalgia factor, I get the feeling people don’t really talk about MP-18S Silverstreak. This period of time that saw Silverstreak prop up 2014’s Takara Tomy Masterpiece line is more commonly thought of as The Wait For Wheeljack. That, or a chance for people to pick up MP-8, MP-11 and the like. That’s to say nothing of Hasbro’s offerings in that time. 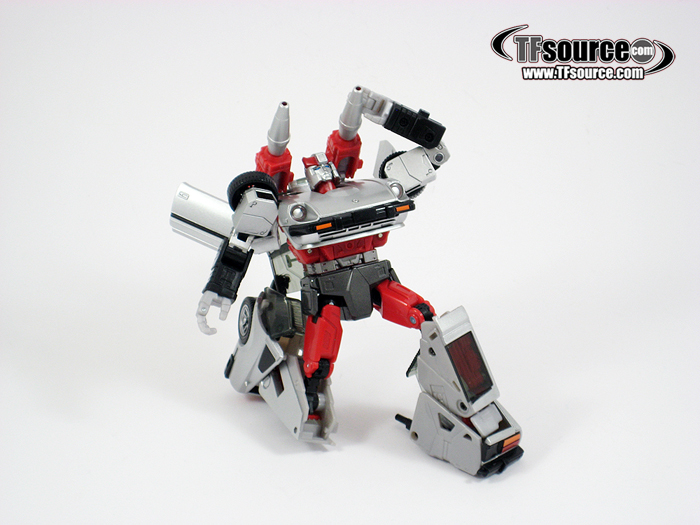 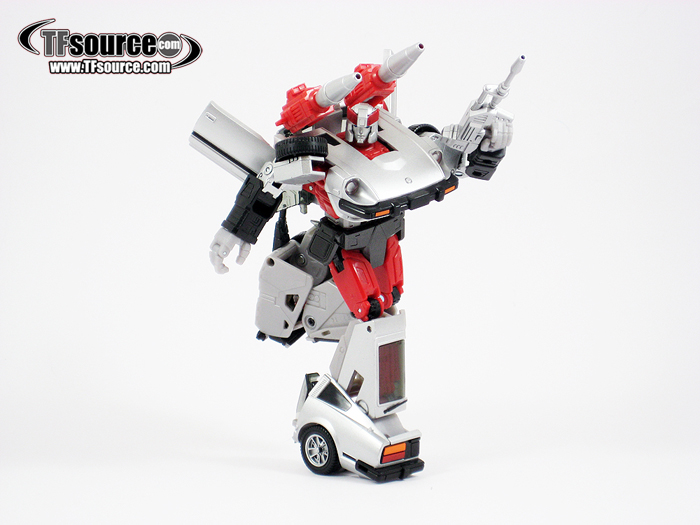 Success from the jaws of defeat 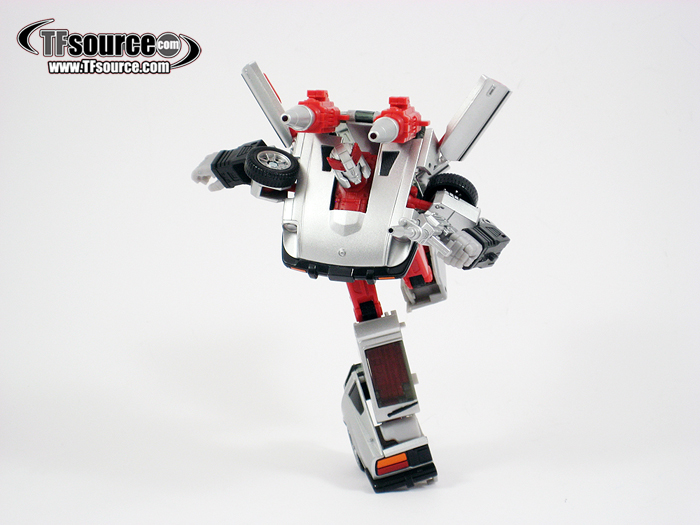 It also did not help the figure’s cause that a number started showing up with defects like gashes in the chest, obvious scratches on the hood or mis-applied silver paint on legs or wheels (mine has a sliver of silver paint on the inner thigh). I am under no illusion about how lucky I have been to get one that can be displayed beautifully in both modes without visible defects. 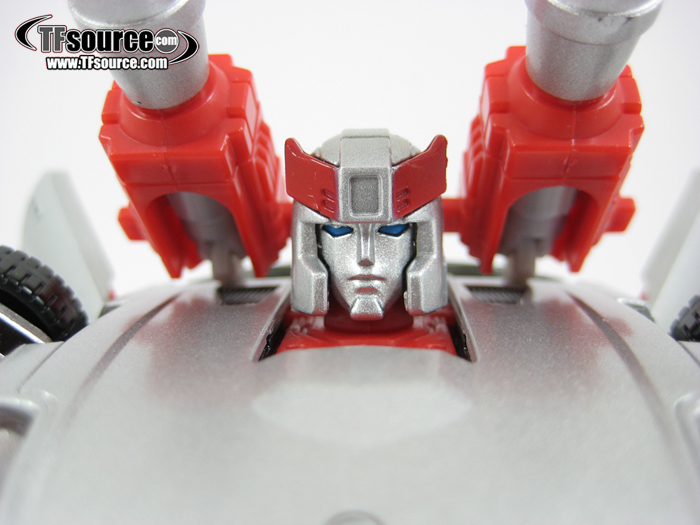 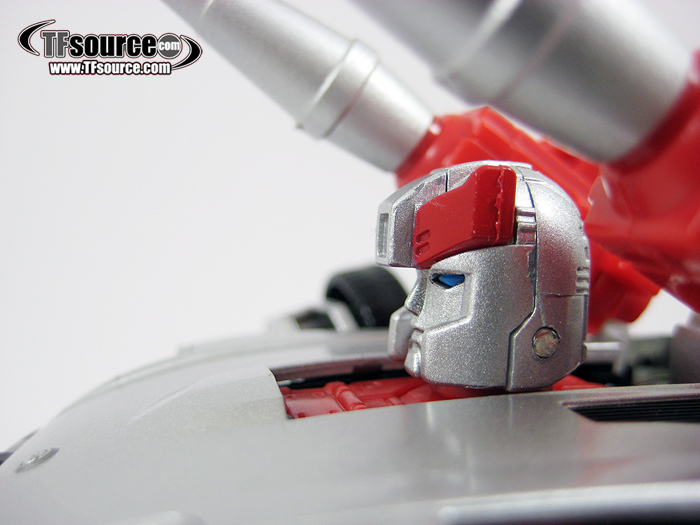 Closer to cartoon head than MP-18? 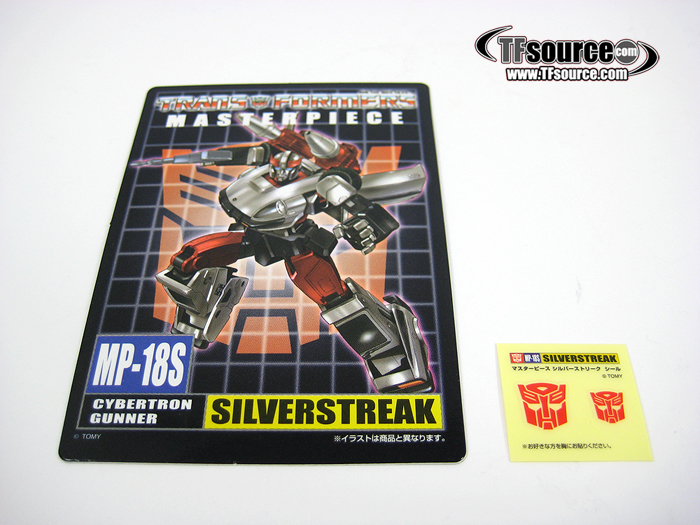 The head sculpt on Silverstreak/Streak still stands above all the other Masterpiece Transformers so far, without any sort of doubt in my mind. The definition on Streak’s delicate facial features and the degree to which they nailed a Generation 1 aesthetic – minus any sort of pouty lips, odd chin, bizarre eye shape or any such deviation – means from top to bottom Silverstreak is a beauty. Since this is a G1 toy deco with no significant Diaclone heritage (beyond the common GiG Italian version which simply isn’t on Takara’s radar), the fact that no Autobot symbol has been added as a tampograph strikes me as a strange choice. I can only deduce that the symbols being on a separate sheet a la Tigertrack indicates a leftover idea for what may well have come very close to actually being an MP Blue Bluestreak release as the Tokyo Toy Show exclusive. 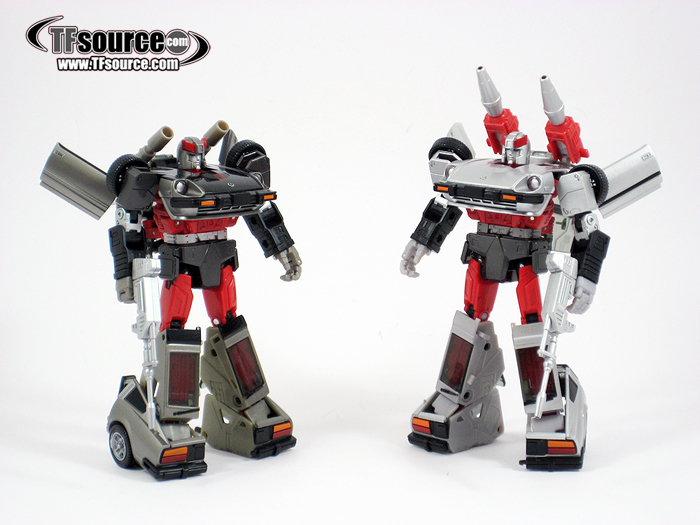 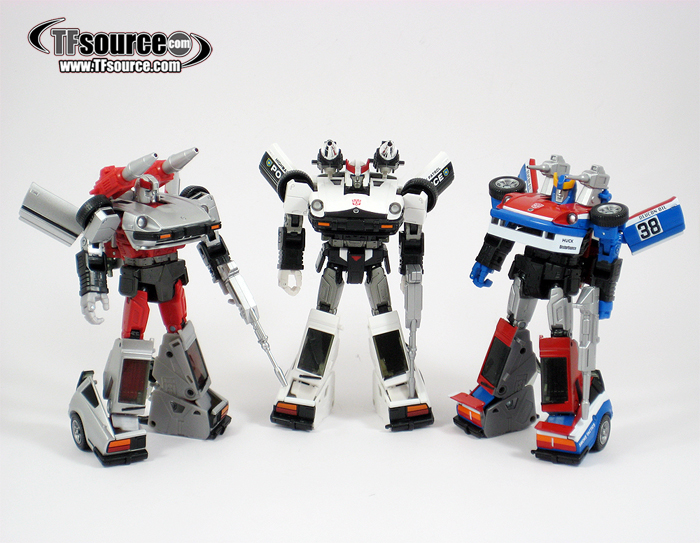 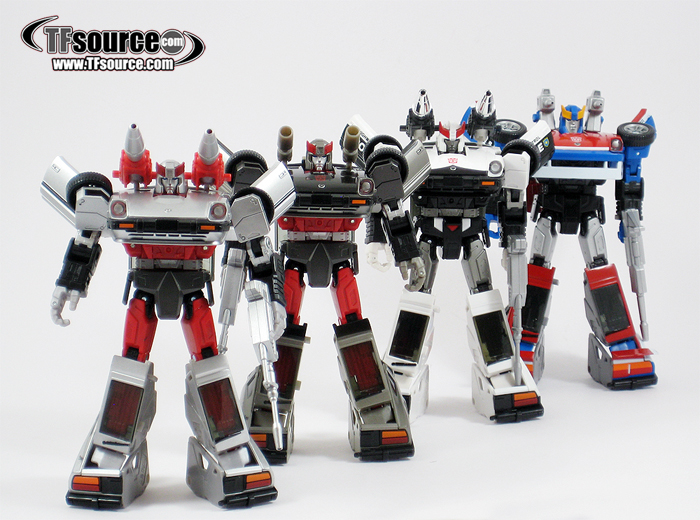 For a time it was even thought that this release could be the all-chrome supposed second prize Diaclone campaign Fairlady Z homage upon which the E-hobby Silver Plated Streak reissue exclusive was based. It’s worth noting that no concrete evidence currently exists to support the existence of a vintage all silver chrome Diaclone second prize Fairlady, only the gold chrome first prize Fairlady has been seen and confirmed. Hell, the term “Silver Prowl” was even bandied about behind the scenes regarding the nature of this release before confirmation of its true nature emerged. With so many different expectations and desires, it’s little wonder that so many could have been disappointed with the choice of scheme for the final production version of this exclusive. However, anyone who has chosen to shun this release based on that disappointment is simply missing out on a gorgeous figure. You can’t fault people for their preferences though, not everyone wants toy-centric Masterpiece. I didn’t think I did. 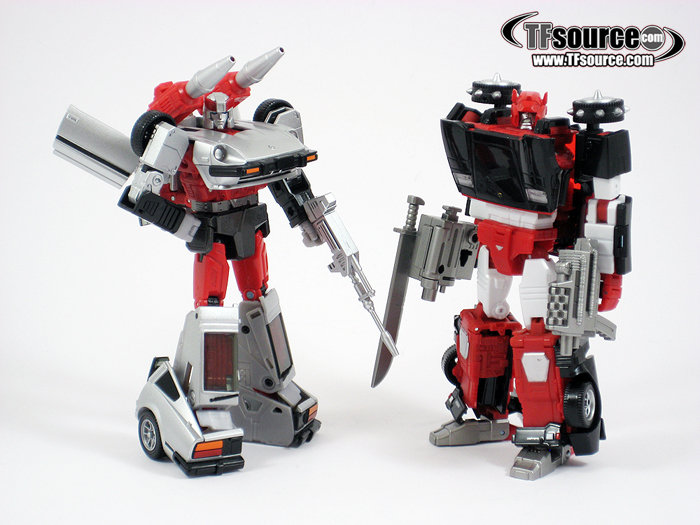 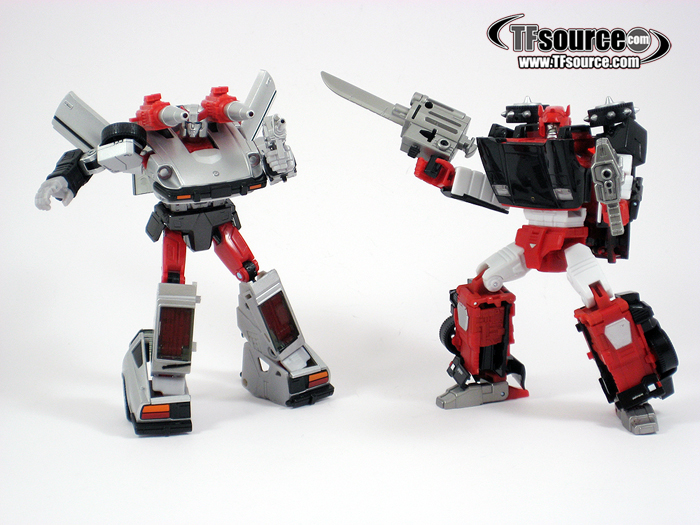 And yet here I am, someone who bought into the Masterpiece 2.0 philosophy of slavish G1 cartoon accuracy and the promise of a G1 Ark crew, buying and preferring the two Autobot car Masterpieces that are most removed from that focus. G2 Lambor has more character and personality than virtually all of my MP collection despite my previous lack of attachment to anything G2 or Marvel Comic-related, so he’s my favourite Lambor, above even Tigertrack – this coming from the world’s biggest fan of ‘Yellow Sideswipe’.

And then there’s MP-18S Silverstreak, the forgotten Fairlady, who wins the whole thing by sheer bludgeoning force of good looks that overshadow every accurate cartoon detail, series homage, geek nod and nice touch of the ‘central’ Masterpiece cars. I’m so glad we got this instead of the Diaclone Blue Bluestreak on this occasion, because Blue Bluestreak deserves to be done right with Prowl’s head and waist, not to just be a direct repaint of MP-18 because of convenience. If we ever get MP-18B, he should be called simply “Bluestreak”. MP-18S Silverstreak stands outside the main continuity of Masterpiece Transformers as non-essential to those who value cartoon purity, conveniently suiting people’s need to buy accessibly priced Masterpiece, and yet is so good that in a number of collections I have seen MP-18S as the preferred “Streak”. That, ladies and gentlemen, is how you do an exclusive. However unintended it was. 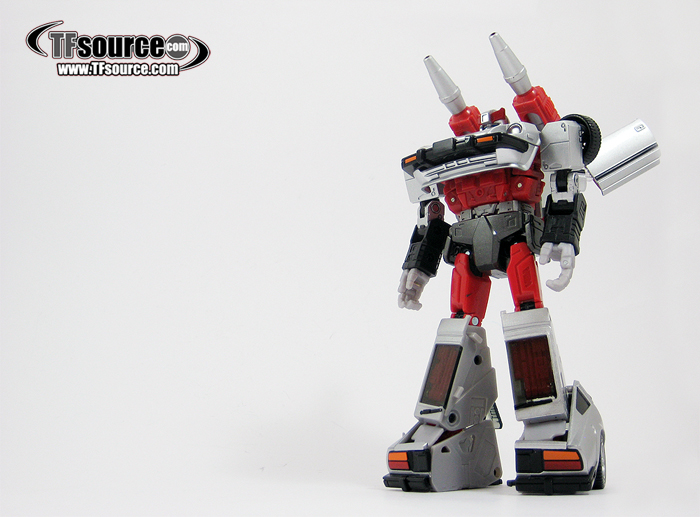