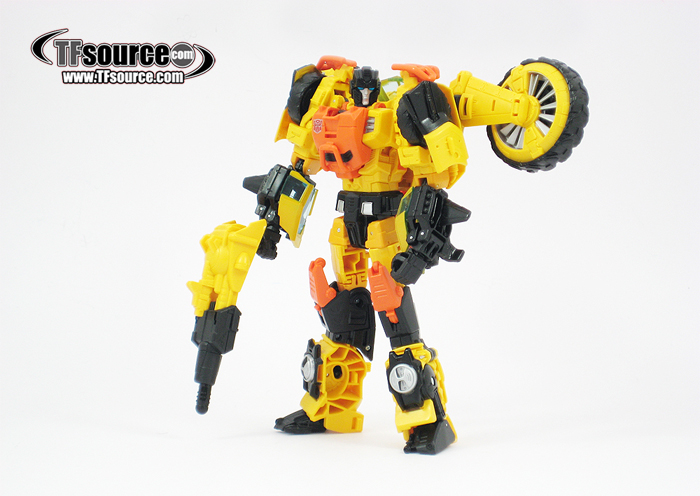 Focus is important in collecting, or so I said for 2 years of writing this column. I was wrong, I’m giving up only buying Diaclones, or only buying Animated, or only buying Masterpiece. It’s become very clear that I’ve missed out on far too much by collecting in a myopic fashion. Every time someone’s forced me to look at a Transformers toy, concept or line I had previously resisted or ignored, the results have been predictable, they were right. No more shunning of a brilliant Generations or Prime figure for the 12th variation of a toy I already have. There’s a new focus, cool Transformers.

Don’t get me wrong, I’m not completely cured. My 5th version of the Animated Activators Bumblebee mould or Prime Wheeljack mould are still winging their way to me now, and the Legion class Beast Hunters Smokescreen mould completion is an affliction my friends saw coming a mile off, but this year my Transformers collecting has become something entirely different to any period of time in the last 15 years. I’m enjoying it more, and I am interacting with it more because the toys are great Transformers, not just great relics. For the first time this summer, I actually missed my collection – touching it and interacting with it – while away on holiday. A feeling that in itself led me to this first toy… 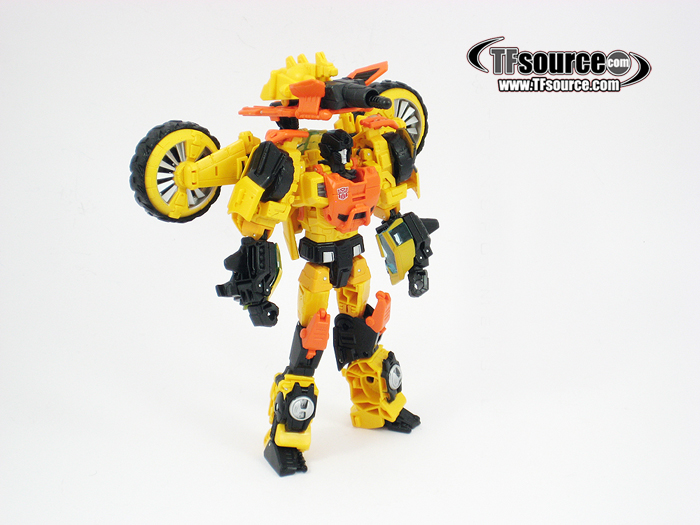 Many possible configurations as per preference

I’d given up on Classics/Universe/Generations many years ago. My unpopular opinion of the line was that virtually all the figures looked compromised or somewhere between a child’s toy that was trying a lot to look like G1 or a collector’s item that was made for too restrictive a price point and size. Maybe I never mentally moved past the original wave’s philosophy that seemed to be saying “OK, it’s not G1 but hey it’s really close and quite articulated and your kids will love it!”. They never looked mature enough to me, but Hasbro’s Generations Sandstorm kind of killed that line of thinking. Brutally. I wanted to buy a toy on holiday to enjoy purely as a good Transformer, devoid of connection to any collecting goal or theme, and based on what was in stock in Iceland, Sandstorm came out as the winner.

The robot mode is glorious, a sea of yellow and orange with perfect levels of black/silver highlights that trump the Takara Tomy colour scheme. Sandstorm has proportions to die for and capable of some really heroic and strong poses. The rotors/fans sticking out so blatantly are immediately a thing of legend for this guy as a defining characteristic, and the head sculpt is delicious with light piping that stuns. His silhouette is instantly classic. 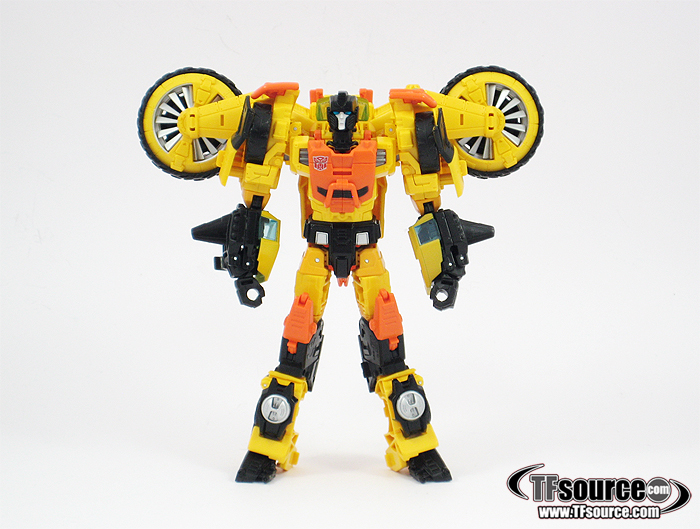 The only thing I dislike about the robot mode are those feet, same as with the iGear Gears, when the feet are moulded at that kind of angle which only allows you to pose the robot with legs spread as in all the Masterpiece stock photos. Had he been given ankle articulation he could have achieved those stances anyway and also would have had the ability to stand up straight with legs not angled. He’s also not as immediately stable as I would like, I do find that if I want to do anything other than straight up standing – like jutting his chest out a bit for manga-style heroic pose, I need to fiddle with the heel spur etc. Such a minor niggle though, it’s such a beautiful robot mode and so eye-catching. Even my wife, MY wife of all people, picked him up and transformed him from VTOL to robot. A firmer endorsement you will not get. 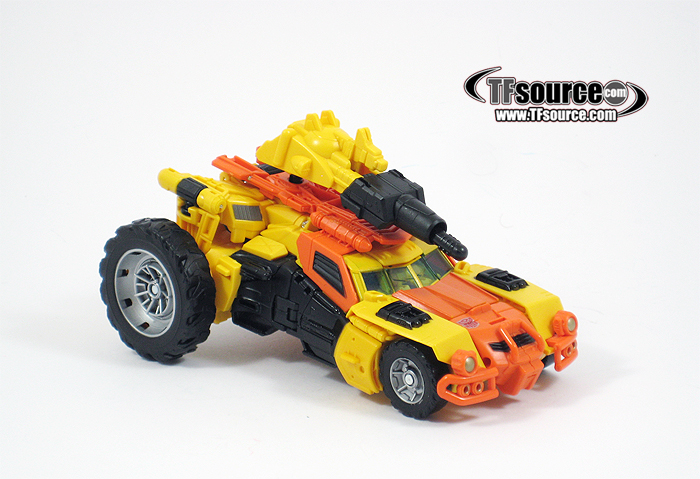 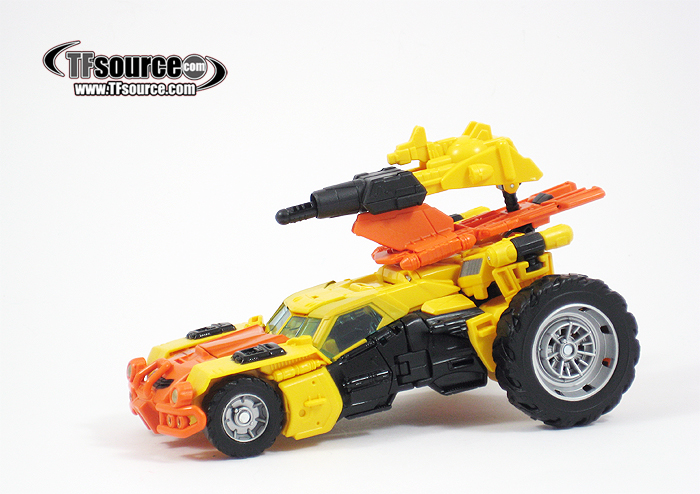 Again, configuration down to you 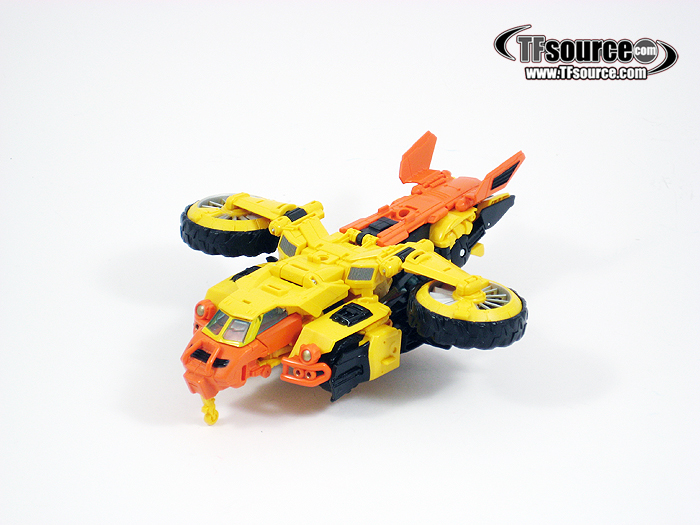 VTOL = Vertical Take Off and Landing

The buggy mode is superb, super solid with great tabbing that allows everything to clip, sit and fit as it should, and like the other modes there’s different options of how to display the gun and the orange tailfin assembly. The VTOL mode is what I think suffers the most compromise, not in terms of looks (love it) but more the way stuff doesn’t quiiiiite clip in as snugly as I’d hoped. And wow, I can’t believe how long it took me to figure out how to clip the gun in under the nose of the VTOL, talk about subtle moulding.

The transformation doesn’t really have any wow steps or flare in it or anything I can really remember, it’s very much just necessary steps between modes (obviously), but when I think of some of Animated Cybertronian Prime, G1 Hot Rod, or Prime Wheeljack or Animated Lockdown’s transformation steps, there are distinct moves that I love and that stand out. Head through chest is ok, and I like the rotation of the feck-off huge rotors and wheels, but that’s all. That’s nothing to worry about, I find Animated Blurr’s transformation something of a pain, but the modes are so gorgeous I’ll do it over and over again, I suspect Sandstorm will fall into the same category. I can’t think of the last triple changer I have seen where every mode was so strong. A truly fabulous figure and quite a looker. 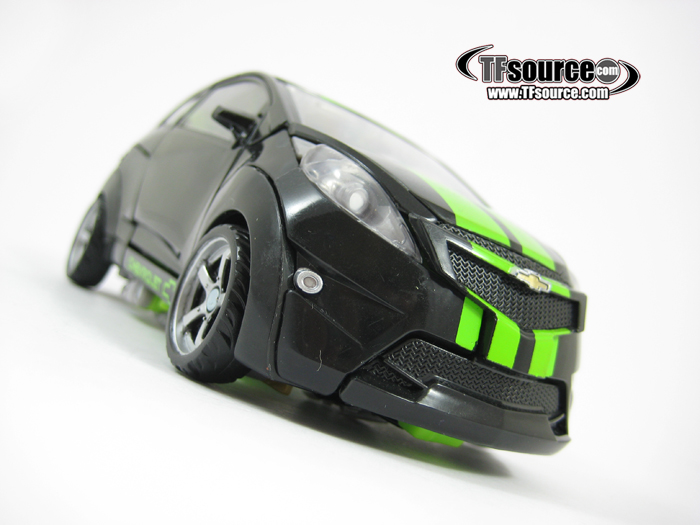 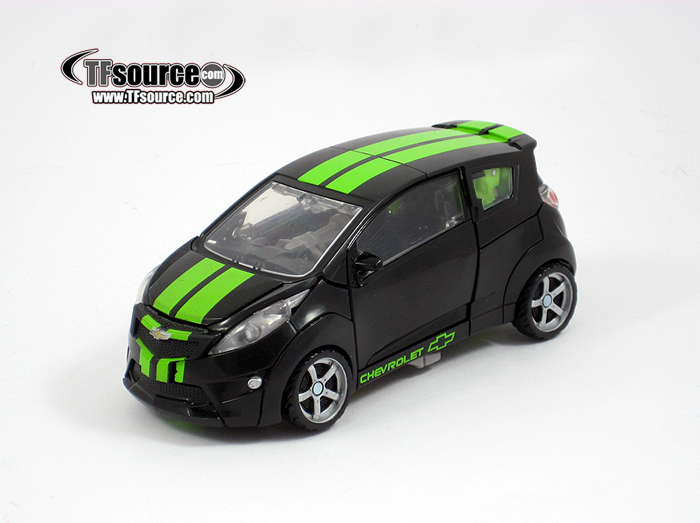 This Dark Of The Moon Human Alliance Autobot Skids should not be considered new territory, really. I have extolled the virtues of collecting the movie Human Alliance cars since day 1, Bumblebee, Sideswipe, Barricade and Jazz remain some of my favourite ever Transformers and represent whatever I may love about the Movies and their Transformers. Skids, though, I hated. I despised the character together with its look, and I subscribed to the commonly held opinion that Revenge Of The Fallen was the poorest of the movies but had the best toys. 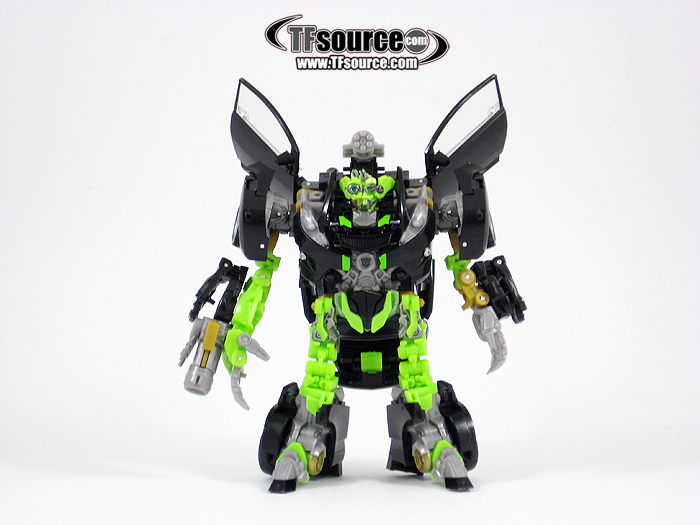 Many moving parts, including the hillbilly jaw 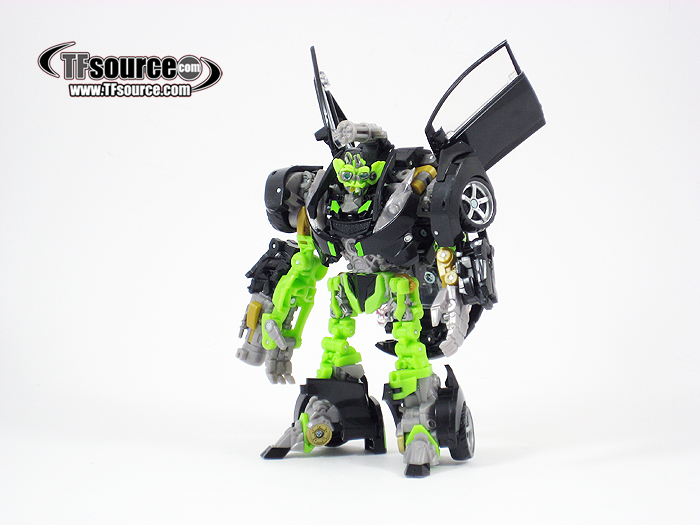 Ugly as he may be, this one’s a winner

I should have known that a mould originating during ROTF and bearing the Human Alliance badge would be amazing though, and “Autobot Skids” does not disappoint. It’s a repaint of the all green ROTF-accurate toy, but this is actually a better colour scheme and the vehicle mode is really hot. Even if he has a face only a mother could love (but didn’t), the intricacy of the transformation, and all the little bits you can manipulate to give him as close to a movie aesthetic as possible really stand out. Every time I transformed it I discovered something new I could move or open/close/rotate/tab. Skids is a completely worthy addition to the Human Alliance dynasty, specifically the DOTM repaint. All this, and I didn’t have any of his accessories or accompanying figures to augment the base product, it’s that nice. 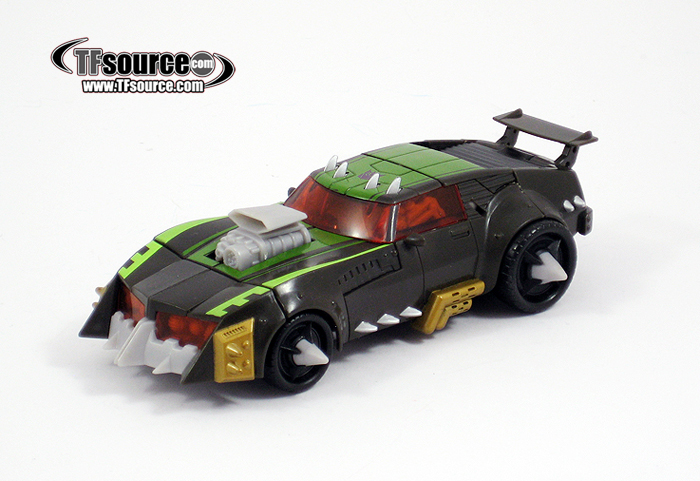 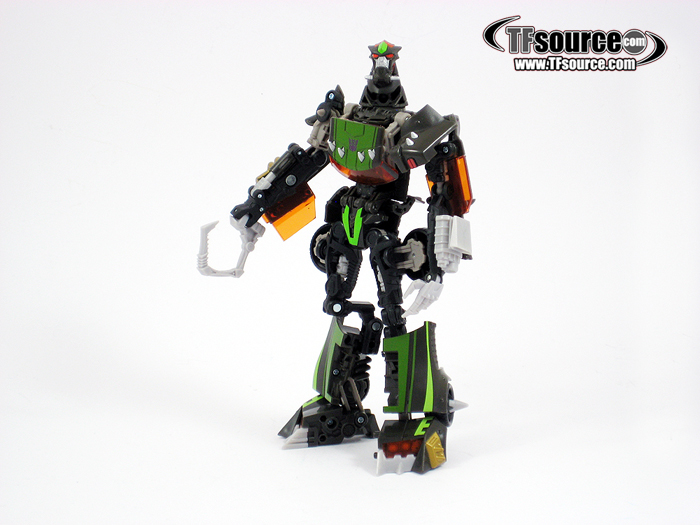 Transformers Animated Lockdown is a wonderful thing indeed, and an enormously recognisable – yet ever so slightly flawed – figure. It did however help redefine what could be accomplished with deluxe class Transformers, and the Revenge Of The Fallen Lockdown does not do the legend of Lockdown any harm at all. This menacing figure oozes evil and brutish charm in both vehicle and robot mode, but as a robot he is much more sinister-looking and eerily devilish. He also has what can only be described as the best articulated neck a Transformers toy has ever enjoyed. 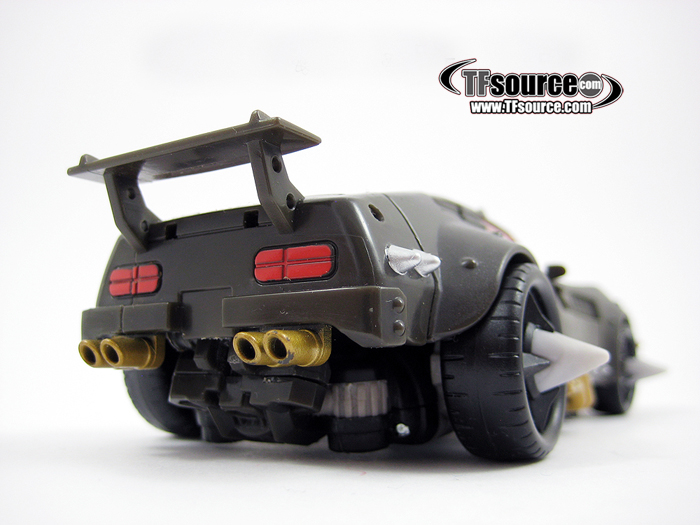 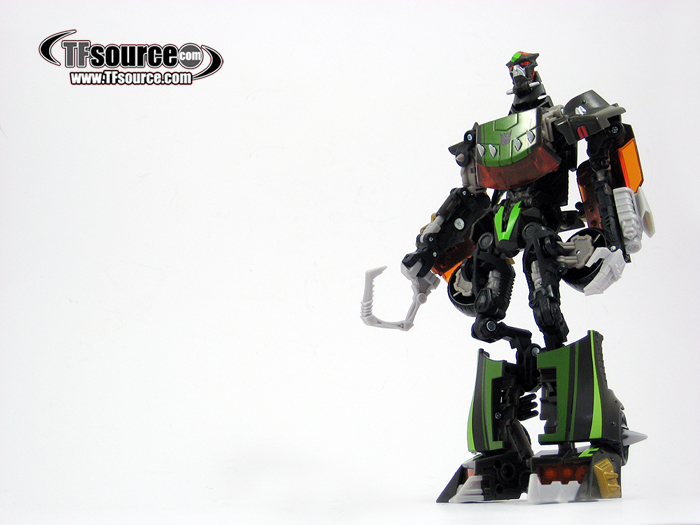 Just another fabulous mould to come out of ROTF, Lockdown’s proportions are probably more visually appealing in this toy line than Animated, and his appendages are as they should be – albeit rubber. While in Animated he was a cool customer with a degree of humour, this toy is clearly a step towards the spine-chillingly ruthless and humourless AoE villain that most non-collectors will identify the name “Lockdown” with. This ROTF iteration of the fandom’s favourite bounty hunter keeps the Animated element of mass shifting where an enormous robot comes out of a deluxe. The transformation can be frustrating but once you crack it, it’s a hard choice to choose between a primary display mode. That’s why I just bought a second one, and another to transplant head and appendages over to a ROTF Axor for a custom ROTF Lockdown variant. 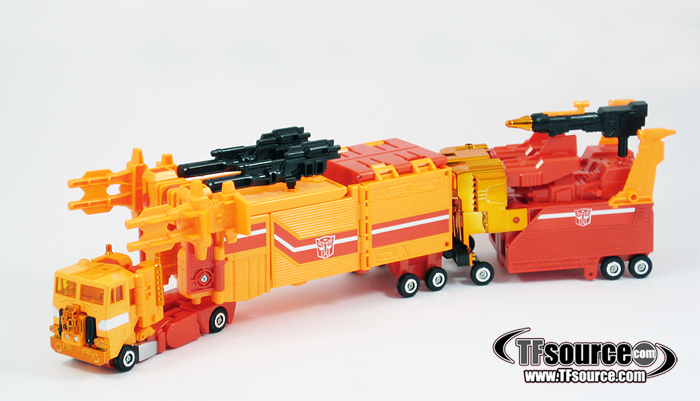 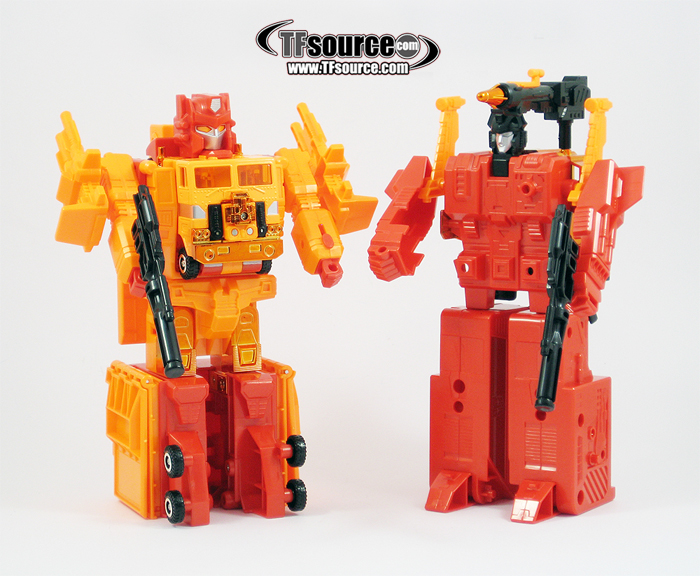 Going back an eon, I grew up on Powermaster Prime and never flirted with Japanese exclusives for long, so God Ginrai or Apex Armour Powermaster Optimus Prime never registered on my collecting radar. That was categorically my loss, as both the Hasbro reissue and E-Hobby Fire Guts repaint came into my possession within a month of each other this Summer. What a revelation. 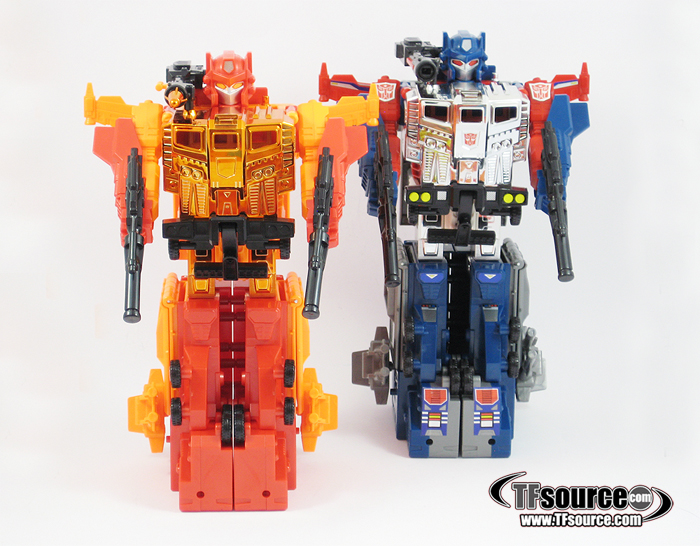 From the very first feel of the die cast cab, everything from there onwards is a pleasure for anyone who thought Powermaster Prime was wonderful to begin with. Ratcheting joints, swathes of well-placed chrome that add to the visual appeal, and then there’s Godbomber. I love how once you partsform him into the robot, it’s exactly the same height as Super Ginrai (cab and trailer combined robot). Then once it’s the full God Ginrai figure with that spectacular height and weaponry, the wings offset the brick-like bulk and the larger head starts to make more sense. There is so much inter-connectivity of accessories and the separate vehicles that its play value surpasses that of PM Prime, goodness only knows what I would have made of it in 1988. The Fire Guts repaint takes all that playability and quality and bathes it in THAT orange. Also, orange chrome. To garner this much attention from me at a time when I’m embracing newer toy lines and products and virtually ignoring my own vintage collection and interests, speaks volumes about God Ginrai. 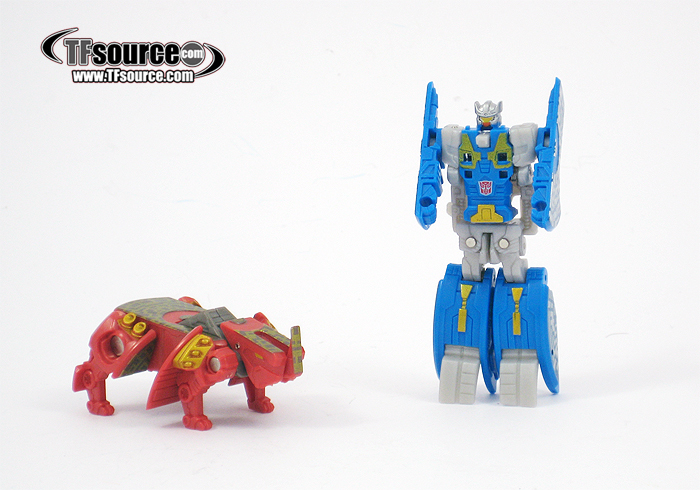 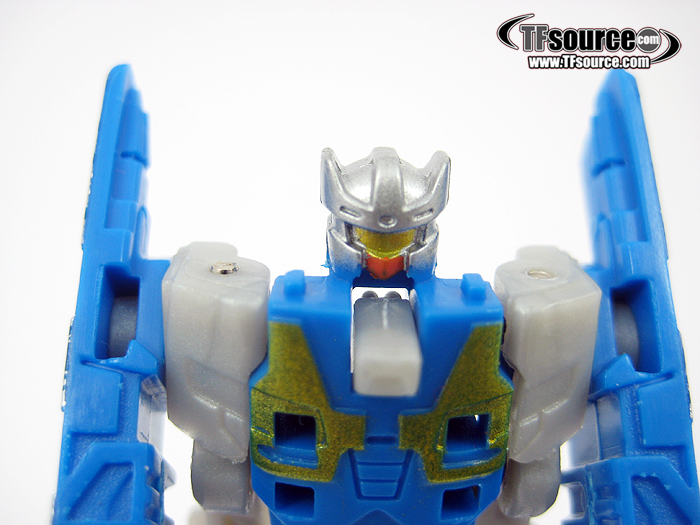 Focusing interest, attention, time and obviously funds on specific areas of the hobby exclusively means that quality can be missed in others. There are certain figures that stand out so brightly among releases and waves of unimpressive or non-priority Transformers that they must surely be experienced by all fans of Transformers. Some of the toys above qualify, as do TF Prime Wheeljack, much of Animated, G1 Turbomaster Rotorstorm and the Fall of Cybertron Data Disks, where during the latter Hasbro show off just what they can do with head sculpts and paint apps on a microscopic scale, and yet somehow drop the ball on bigger toys now and then.

Some may feel that ignorance of this variety, and the overcoming of it, is nothing to celebrate or write home about, but discovering these toys and filling gaps I never knew existed has been one of the most pleasurable hobby experiences I’ve had. I genuinely hope there are more gems I haven’t uncovered, because I’d hate to think that all I have to look forward to is what’s coming out next. 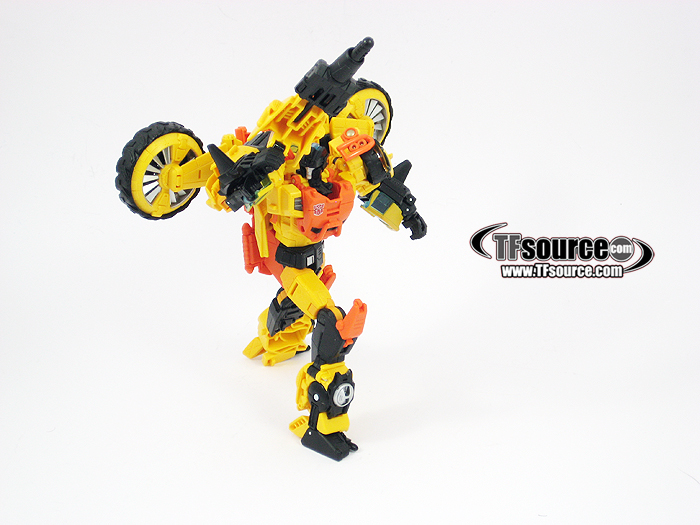