A Voyage Of Animated Discovery – Part 1 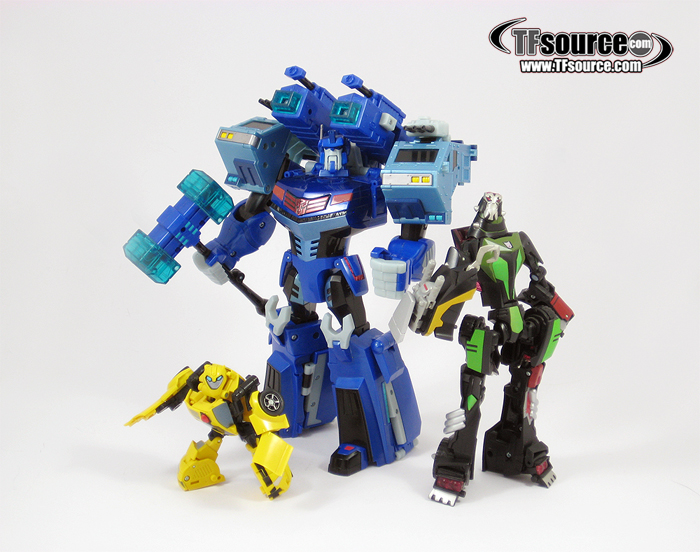 Transformers Animated is an incredibly divisive chapter in the history of the brand among collectors. For every fan who loved the cartoon and was touched by the depth of the story telling, continuity and homages to prior eras of Transformers, there are those who simply can’t understand the love for this highly specific aesthetic and style, both toys and cartoon alike. You can often find collectors liquidating everything from vintage to modern day releases, but even the most thorough collection clearout posts can have a massive gap in chronology where the Animated toys should be. Either because they are keeping this most special and unique of TF lines, or because they never got on board with it in the first place. And that says a lot about how Animated is seen even today, just as at the time. 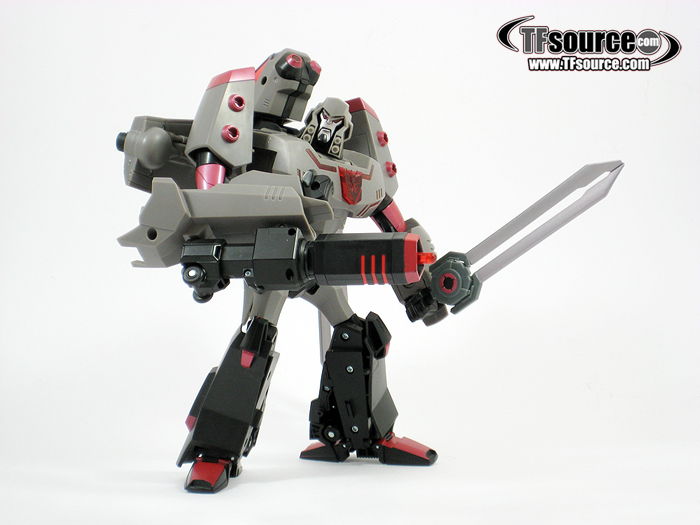 Now, this most certainly is not a review of the whole Transformers Animated toy line, cartoon or history. I find myself delving into the world of TF:A again after 6 years away from it having been an ‘early adopter’ and completely on board with the look, feel and direction of Animated from the day I held the painted hardcopy prototypes in my hand at BotCon 2007. And by re-entering this circus again after so long, I realise I’ve missed what its most loyal fans treasure the most, seasons 2 and 3 and the toys that go with it – not to mention those that never made it. So I’m going to need a little more time before I can do a full-on review of the line justice. This week I just plan to share some of the discoveries and purchases I’ve made on taking a few steps into the ocean. 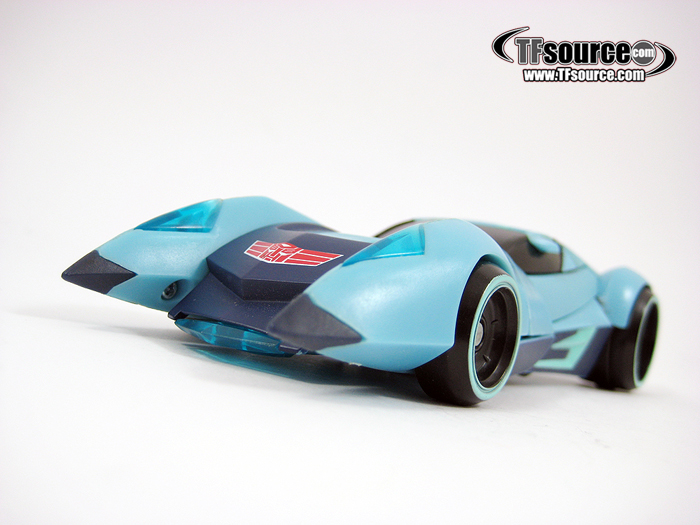 When you take into account that my whole TF Animated collection consisted of voyagers Optimus Prime, Lugnut, Blitzwing, then deluxes Bumblebee, Elite Guard Bumblebee, Ratchet, Prowl, Blackarachnia, Jazz, Soundwave and finally leaders Megatron and Bulkhead, it’s obvious I was assembling a first season show cast, with a smattering of early season 2. I was already out of collecting by the time toys like Ultra Magnus, Blurr, Oil Slick and Rodimus got released, and I skipped the Dinobots, Lockdown and many repaints. Looking back now, knowing how much this line is loved – not just by myself – and realising how difficult some bits are to get now, I wonder how I could ever have walked into Toys ‘R’ Us at the time and not bought everything Animated. 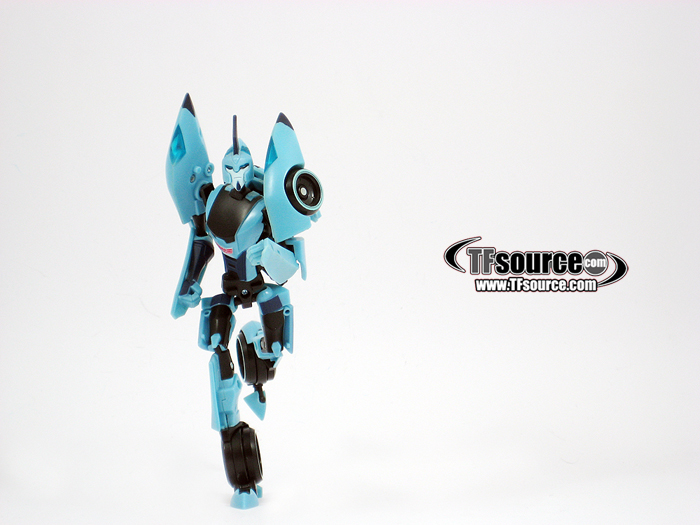 No trickery involved, this is Blurr winning at gravity

One of my first discoveries was just how highly regarded the deluxe Blurr figure was amongst collectors. In the segment that Dan Ghile and Richard Brown did for the Ambassadors series of TFSource Blog articles, they chose Prowl as the perfect representative for Animated, but very nearly opted for Blurr. Upon handling recently, I was left quite speechless at what the designers had achieved in terms of enjoyable transformation married to show accuracy, and a height of sleekness in both modes reached only by Classics Mirage in recent times. Hollow wheels, HOLLOW WHEELS, and just get a load of that running pose his tiny little feet can support without any Photoshop trickery. His flip-out weapon is a little naff, but the shield is totally Blurr, the tabbing in car mode can be tiresome but this is a sublime toy oozing poses and personality. 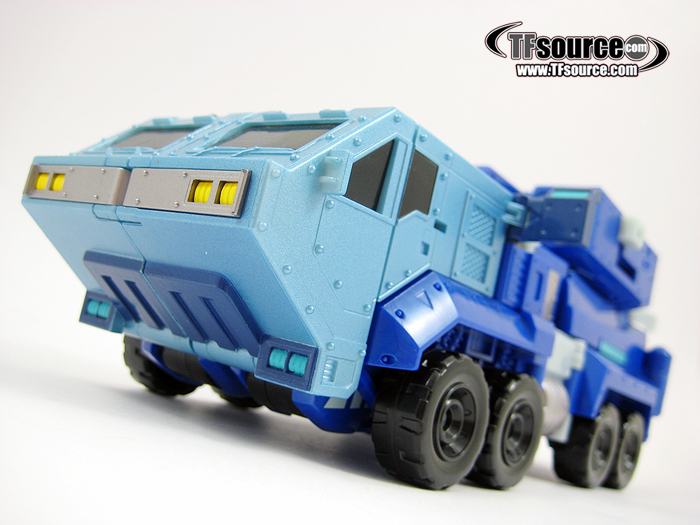 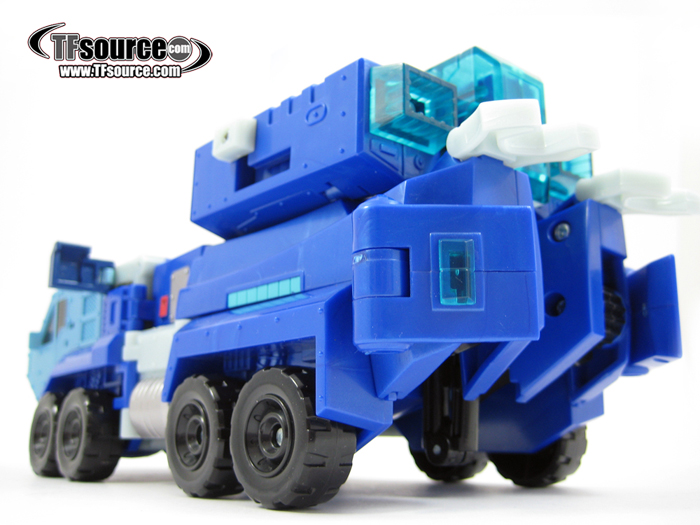 It cant carry cars, but who cares?

Not only did I recently come into possession of the tremendous Animated leader Ultra Magnus just days after being shown one for the first time, but it was a Takara version with the light metallic blue cab halves/shoulders and shiny metallic chest paint too. Morgan calls it a “half-brick” and it really can do some damage as a weapon, but as a toy it’s virtually peerless in this line as a leader, really deserving of the title in personality, size and heft, but not in the transformation. 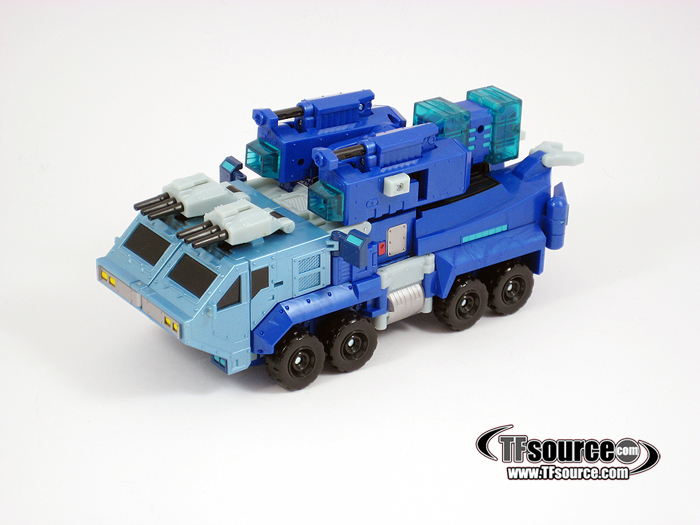 An Animated Autobot with GUNS 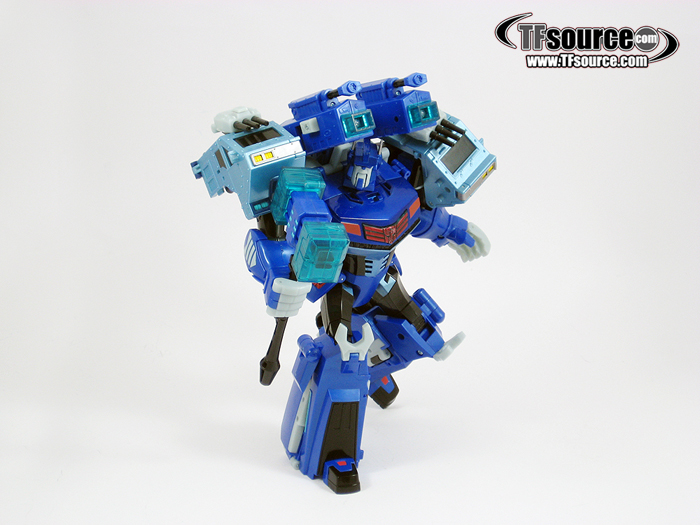 Animated leader class toys tended to have pretty simple transformations for their size and class, especially when compared to the leader class Movie figures, but that doesn’t make them inferior leaders. The presence of Ultra Magnus, from his disapproving eyebrows to the absolute mental arsenal of cannons and guns – quite unique for an Animated Autobot – means you know when he’s on a shelf. The vehicle mode is an impenetrable montage of metallic panels, bulkheads and hidden gimmicks. Magnus is a hugely satisfying toy that beautifully strings together the comically exaggerated Animated bodily proportions of its cast and the soul of a giant vehicular mecha. Angles and curves in perfect harmony. 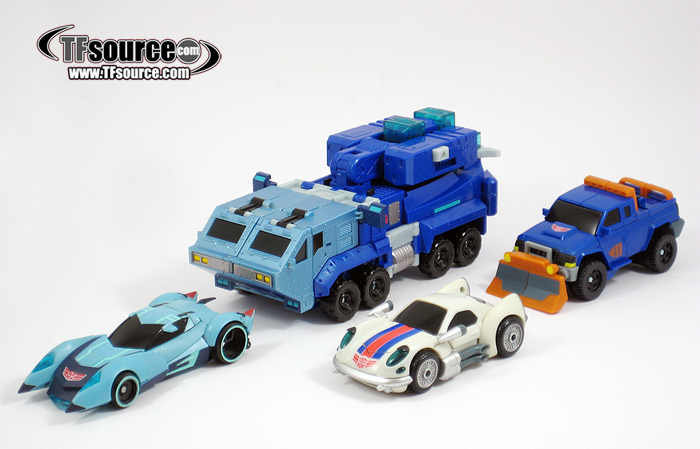 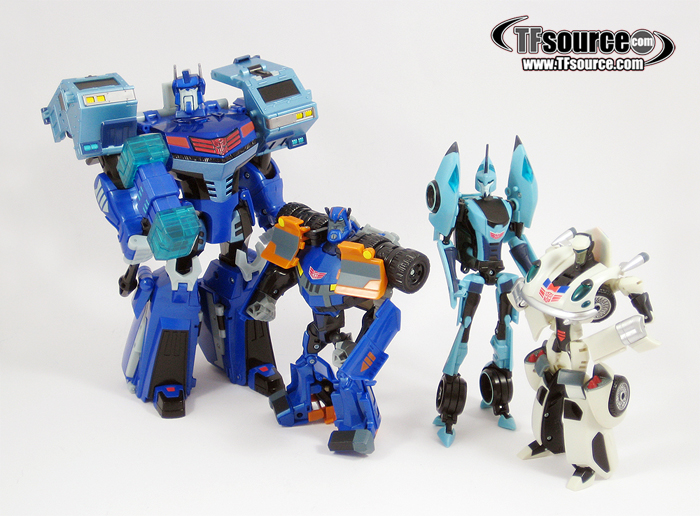 Jazz I had before, Sentinel Prime we already spoke about recently and Blurr I gushed about just a little further up, so here is Magnus alongside the rest of the Elite Guard as they were introduced at first in the show, demonstrating just why he’s the real leader of the Animated Autobot toys. It was nice to discover that I don’t have to bash the hammer on the ground to get it to flip out, pulling the centre upwards does the trick just fine. Ahem. As a group, the Elite Guard Autobots are amazing really, with Blurr’s striking slender look, Jazz’s perfect proportions and beautifully compact vehicle mode, Sentinel Prime’s engaging transformation that should make him the poster boy for all deluxes…and the very serious Ultra Magnus. I cannot believe I passed him up for £20 new during Nexus Iceland’s sale in 2009. 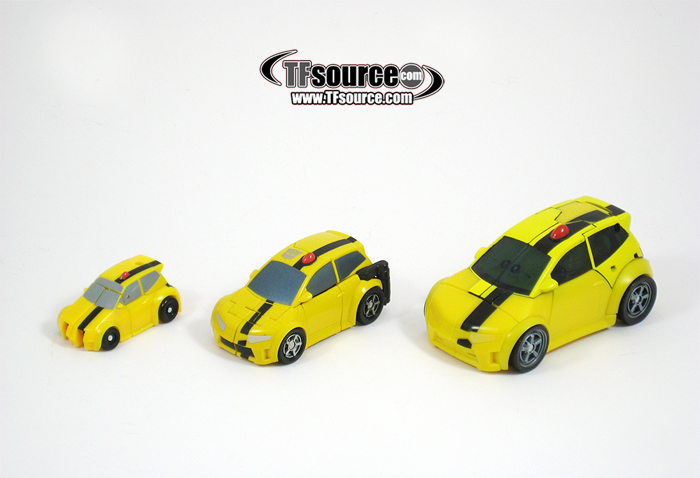 Just moving away from individual characters for a second, yet another element of Transformers Animated I ignored during their heyday was the sub-deluxe class toy range. I felt the deluxe, voyager and leader class toys offered something significant for an adult toy collector; show accuracy, complexity, immeasurable display options and credibility. Another mistake, and another reminder that time after time I visited toy stores in 2008 and walked straight past some of the finest creations of the time. 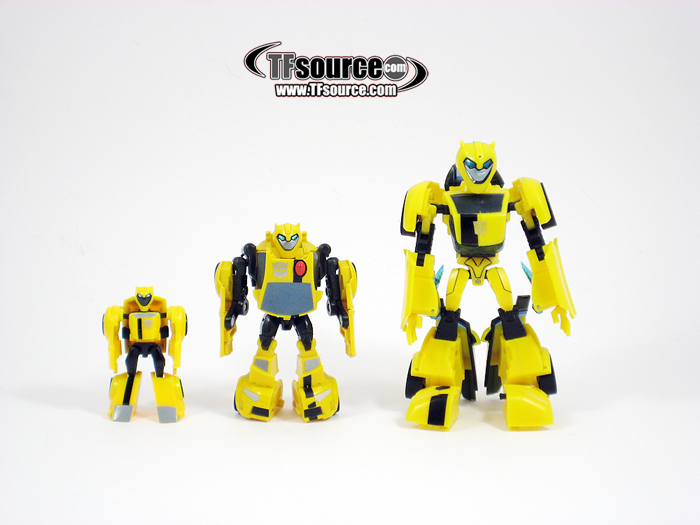 Animated Activators are supremely nice toys, and not only full of appeal for children who can’t grapple with the more complex deluxes – from an era when deluxes were a bit more for a bit less than they are now. The Bumblebee above is one of the best of the line, a really satisfying flip-out mechanic and any intricate but easy transformation back to vehicle mode that holds very well despite the powerful springs. The Activators Lockdown is slightly more difficult to secure in vehicle mode, but no less interesting or enjoyable both as a toy or a display piece. 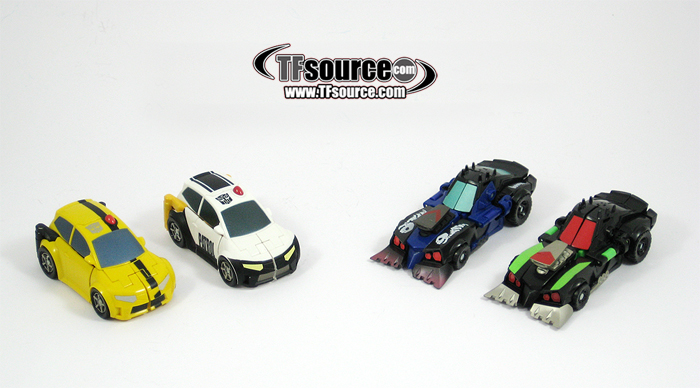 Even the tiny Legends class Bumblebee was a revelation. It was poseable, fun to transform and quite worthy of starting a Legends collection for. From the biggest to the smallest of the line, I was constantly taken aback by how little I knew about the extent of the quality, imagination and intricacy of the Animated toys and the line as a whole, and then just what a mission it would be to even consider full metal completist. The discoveries didn’t stop there, though, and neither has my buying of Transformers Animated toys. It’s like it’s 2008 again, because sealed Animated can still be had for decent prices. Like all Animated fans though, I’m equally as heartbroken to find out what didn’t make it to the line, as what we actually got.

A Voyage Of Animated Discovery – Part 1