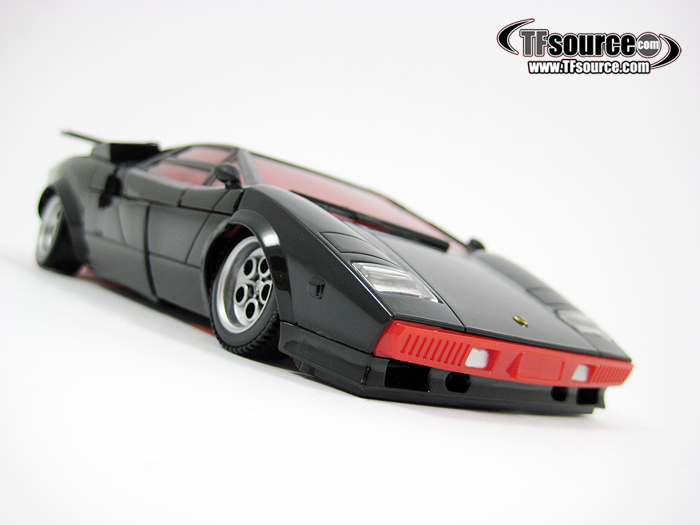 That’s pretty beautiful isn’t it? The MP-12 Lambor/Sideswipe mould in black. Because everything looks good in black, Masterpiece Optimus Prime, Soundwave, Rodimus and now Sideswipe. I’ve now seen all of those black repaints in the flesh and my opinion is that they are beautiful, but whether they are worthy of the extra spend is a matter of how relevant the repaint is to the collector. Arguably, MP-12G Lambor G2 Version (G2 Sideswipe) has the most character to him, something that the execution of this toy taps into deeply. But, is it enough for this to just be as pretty as a black Lamborghini Countach was always going to be? Is there anything else there under the surface? 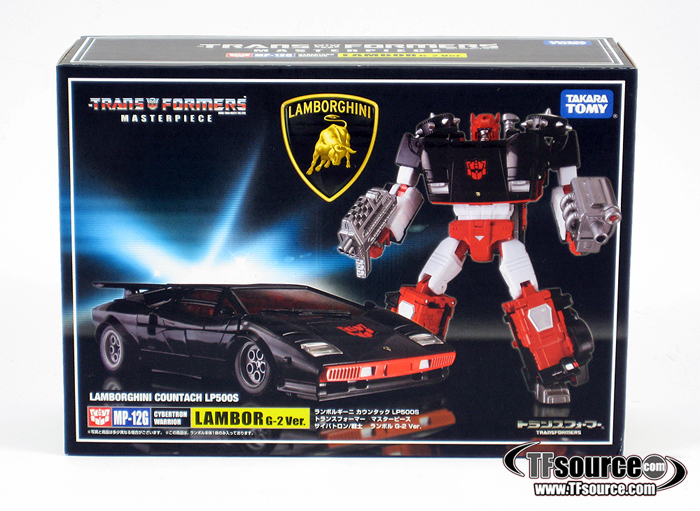 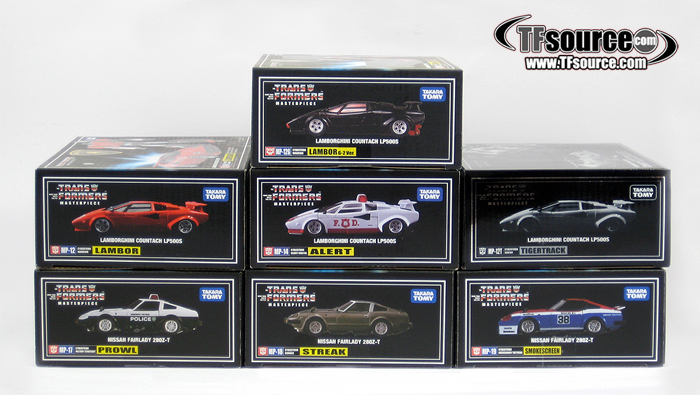 That’s right folks, 7 cars in and still only 2 moulds.

Extra-curricular characters like Tigertrack have previous, we had them as reissues and I guess people expected Takara Tomy to continue down the Diaclone/E-Hobby route and give us Clamp Down and Deep Cover, but G2 Sideswipe seems to be a real bolt out of the blue, surely the main appeal here for the majority of fans is that we get the tremendous Countach Masterpiece mould in stunning glossy black with red highlights? 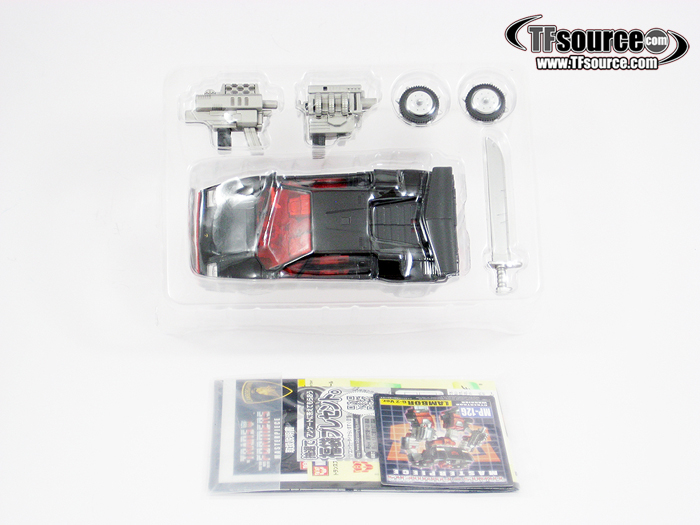 That’s a lot of accessories, and the look serious 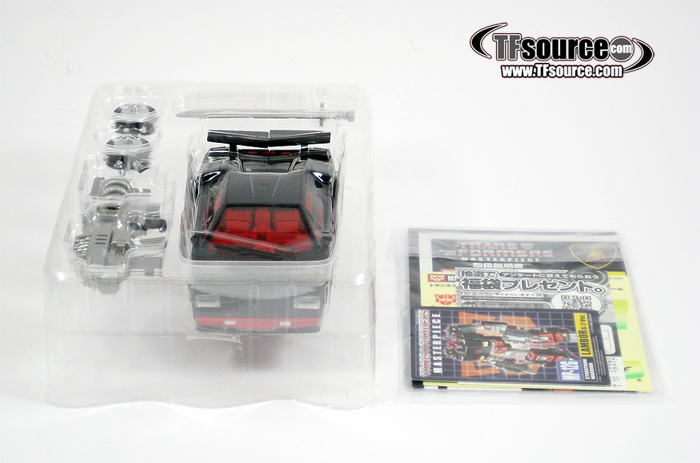 As more news and images emerged about G2 Sideswipe, it became obvious that this was not a straight black and red repaint of a surely-decaying mould, for a start it was very obviously based on the Derek Yaniger-drawn G2 Sideswipe from Marvel’s Transformers Generation 2 series written by Simon Furman. A Sideswipe armed to the teeth, showing teeth and completely unmistakable. 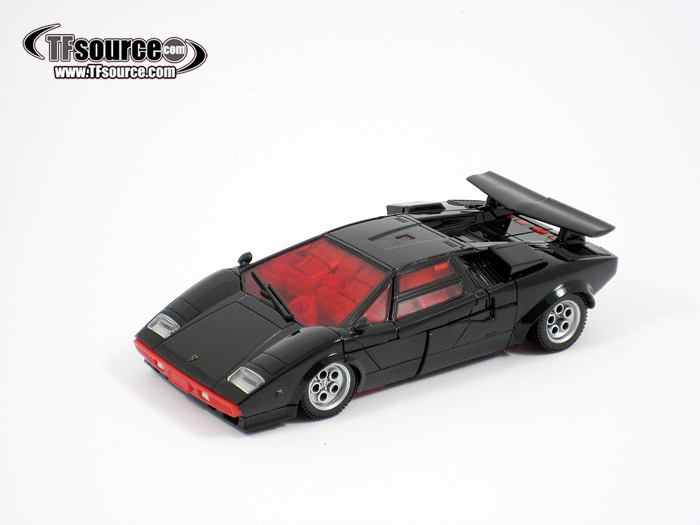 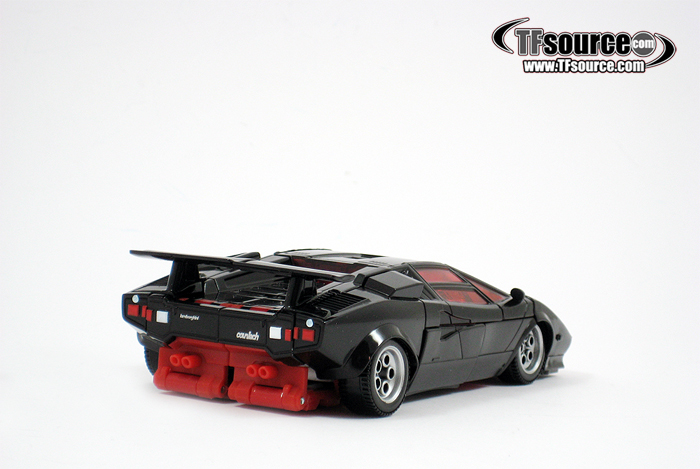 The rear end kibble is more obvious in red

Before we explore that character, there’s nothing wrong with enjoying the shallow water for a while, in other words, let’s admire a stunning vehicle mode sculpt in breathtaking glossy black colours with red highlights. G2 Sideswipe was always something of a looker, as were the 2 variations of the Diaclone Black New Countach LP500S. While the red exhausts, rear undercarriage and front bumper clearly take away from the real life street appearance that such a car would have, and can grate on the otherwise delicious black gloss of the car, the red tinted windows are an absolutely perfect feature. 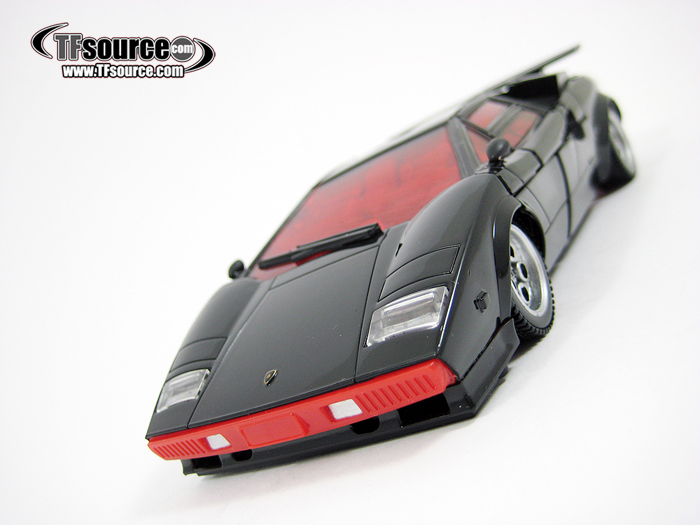 Do we really need to transform him? 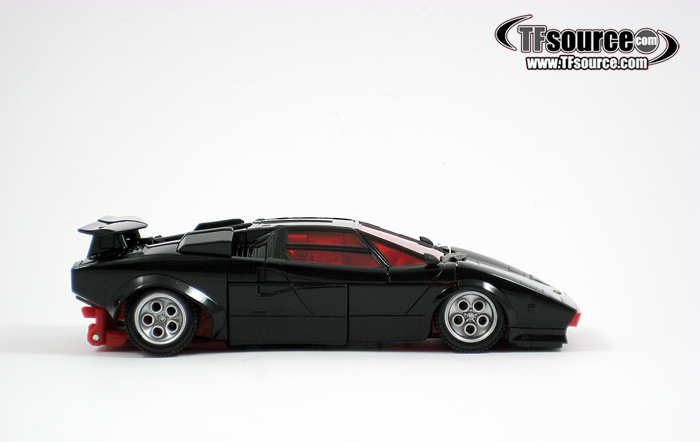 Yeah, go on, just put your thumb over the red kibble at the back, now we’re good 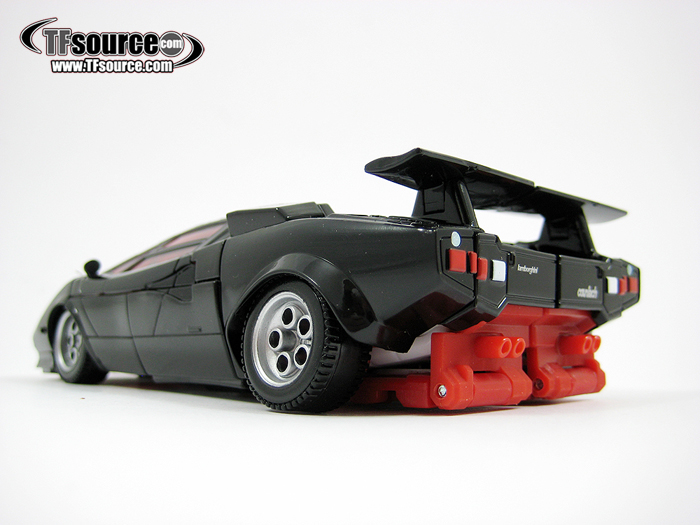 I’d still take Deep Cover if they did it

It is almost worth the price of admission alone thanks to that incredible vehicle mode appearance. I am certain that collectors with no attachment to G2, either the comic or the concept as a whole, will have bought this for purposes of Masterpiece line completion, Autobot Masterpiece car completion, Masterpiece Lamborghini completion, for customisation into Deep Cover / Black Diaclone Countach or simply for the fact that it is so beautiful in vehicle mode.

Then of course, we have those who bought him for this: 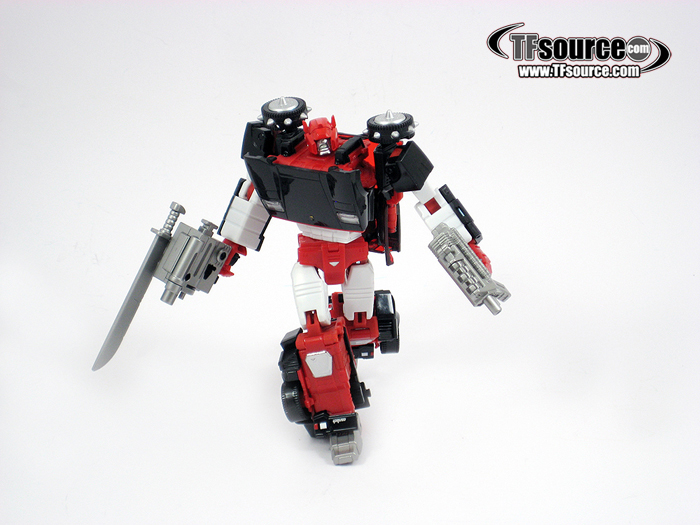 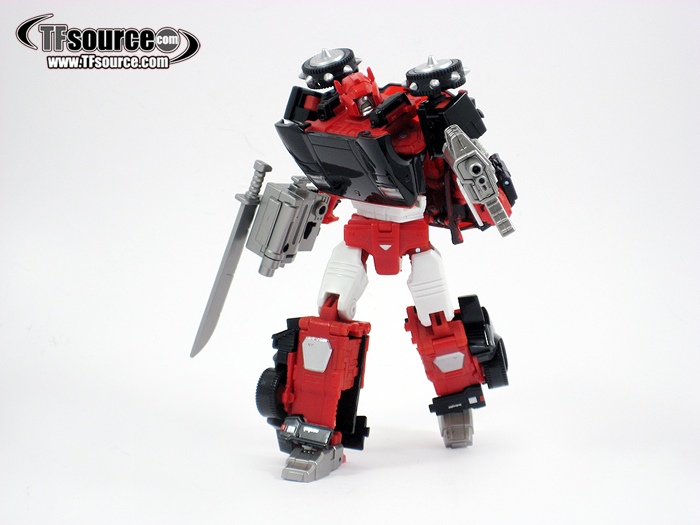 Teeth, and armed to them 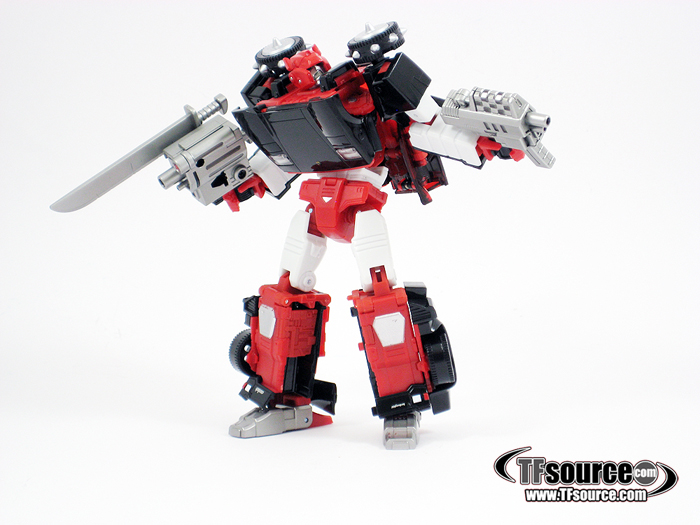 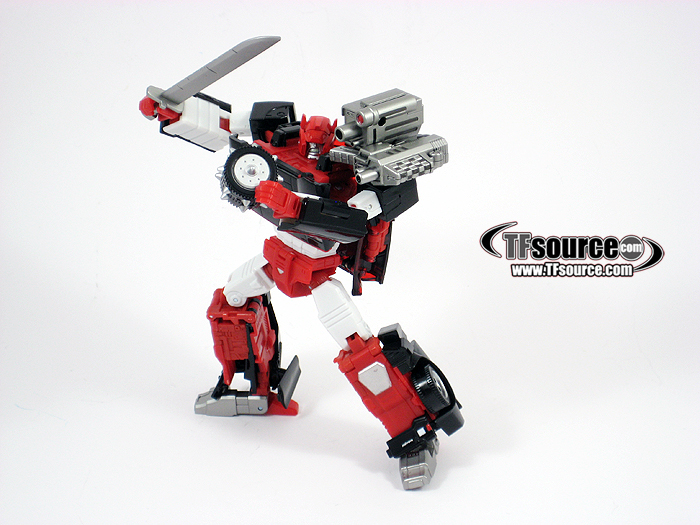 I was firmly in the black Countach camp when I purchased this toy, I also wanted to try a direct Asian route for Masterpiece purchases to explore shipping and cost practicalities, and this was cheap enough to be the guinea pig. I had G2 Lambor for nearly 4 months before actually opening him. I’d seen the robot mode in the flesh without accessories and next to MP-10B, MP-13B, Citizen Stack, Leo Dux and other such recent releases, he was quickly ignored and forgotten. This was after I had read the entire Marvel Generation 2 comic and actually enjoyed it thoroughly, understanding the character’s background, original inspiration for this toy and Derek Yaniger’s tremendous portrayal of a complete badass who loved his job. I still didn’t open it. 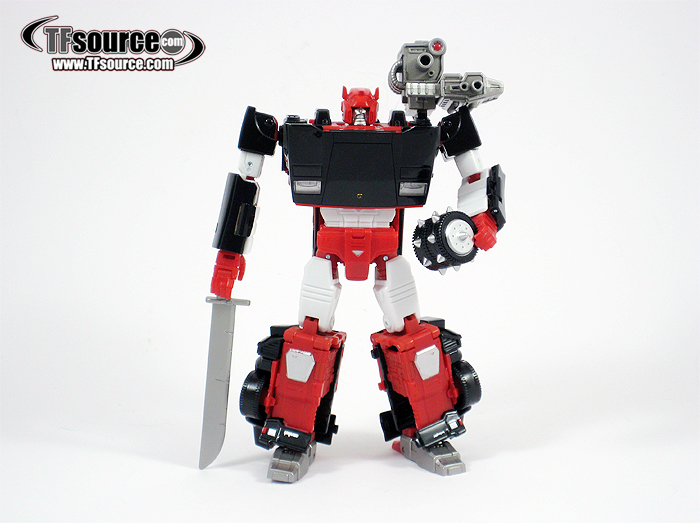 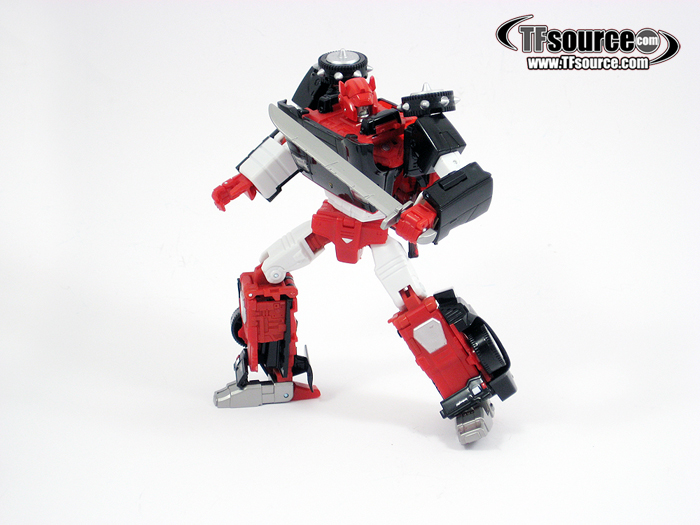 Remarkably, it was Transformers Animated Sentinel Prime and G1 Rotorstorm that inspired me to open the G2 MP Sideswipe for a photoshoot of badass Transformers with great head sculpts who were heavily armed (See HERE). Once opened – and most importantly – armed with all his accessories, true clarity and understanding, appreciation and love dawned on me. This is truly a fantastic Transformers toy, and it does something very special, it drips with character and accomplishes two completely different things in both modes. A sexy sleek vehicle mode that can just be stared at for hours, or a massively over-the-top robot that’s spot on to its inspiration and revels in its own excessive anger and weaponry. 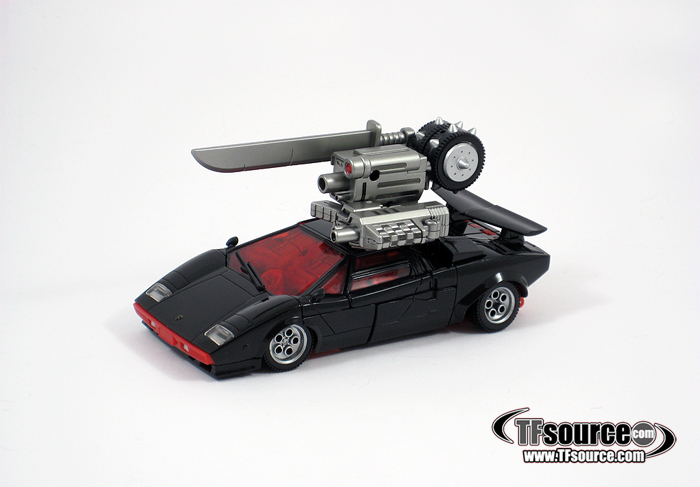 Spiked wheels can be mounted horizontally as well 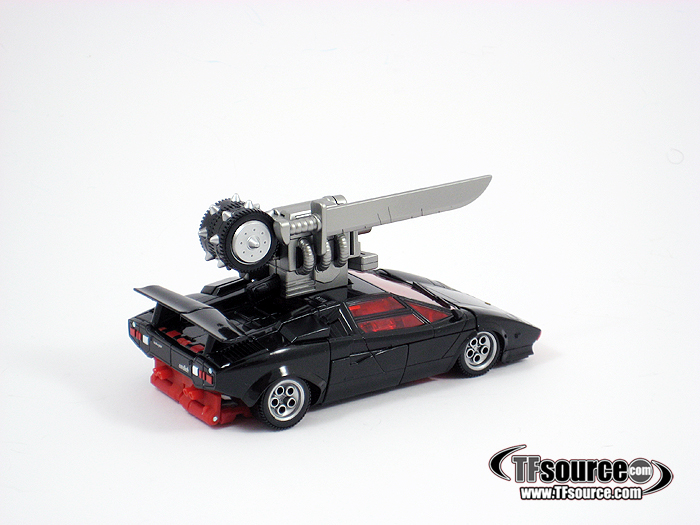 The toy has basic robot and vehicle modes that are nothing new to any Masterpiece Lambor/Red Alert/Tigertrack owner, it’s just black and red with a snarl on his robot face. It’s the weaponisation of either mode that creates the lasting appeal and trademark appearance of the toy. The combining weapons – everything from rifles to swords and spiked wheels – add so significantly to the toy that he can almost be considered to have 2 basic modes, and two distinct attack modes. 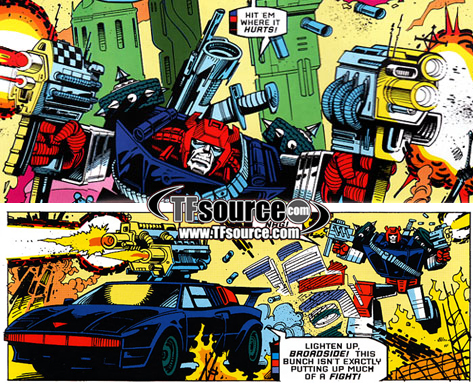 You can see how superbly faithful the design of MP-12G is to the comic, something that quite possibly over half of those who purchased the toy have never seen nor read. I think it’s a pretty brave move to dedicate an entire Masterpiece release to a comic-specific character that can’t even be considered pivotal to the plot. The plot of what cannot be considered a widely read and appreciated comic. That is, unless my assessment of the appreciation of that Marvel G2 story is way off. I’m so new to Transformers comics myself, that my perception is warped compared to those that have fond memories of growing up with this particular comic. 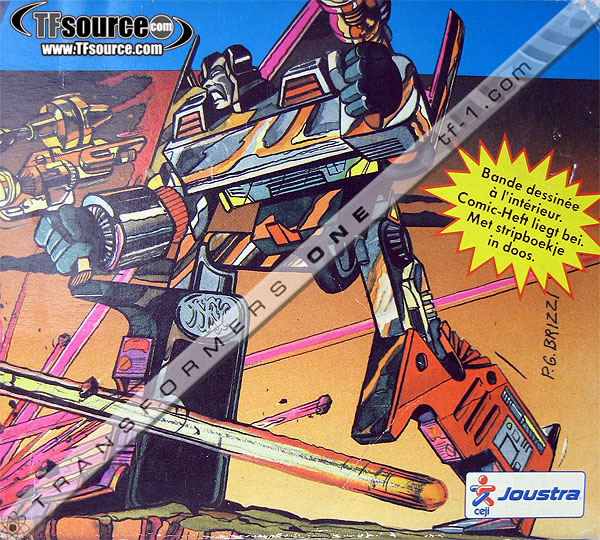 Of course, MP-12G is not the first comic-inspired Masterpiece release, MP-8X King Grimlock was the first but it was a limited release, this is mainstream and requires more sales to justify it. It’s also the fourth version of this mould to see release and certainly the toughest sell. Not for everyone though, those that found relevance in the character and its history were thanking the heavens, the appreciation from those quarters of the fandom is intense. As we can also see from the above image of the Ceji Joustra Diaclone story from 1984, it isn’t the first time that Transformers-related characters have been taken to such extremes in fiction that has been distinct in its snarling and aggressive artistic interpretation. 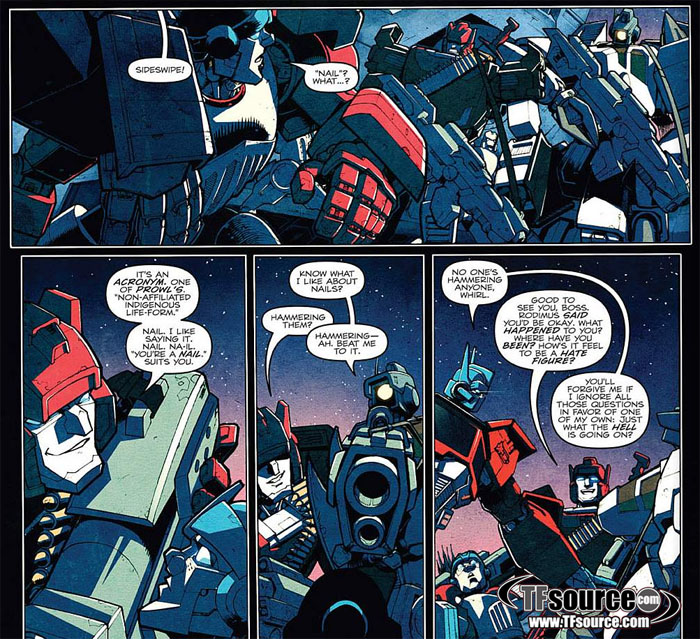 Takara Tomy and those pockets of the community were clearly not the only ones affected by Derek Yaniger’s original interpretation of G2 Sideswipe, the IDW Transformers oneshot “Death Of Optimus Prime” that launched the massively popular current ongoing series “More Than Meets The Eye” and “Robots In Disguise” featured the same gun-toting, bandolier-wearing, snarling Sideswipe, complete with G2 colours, albeit on the Classics mould! Nick Roche’s rendition of Sideswipe in this oneshot was not carried forward to the ongoing though, with Sideswipe subsequently being drawn again in G1 colours.

The cars so far 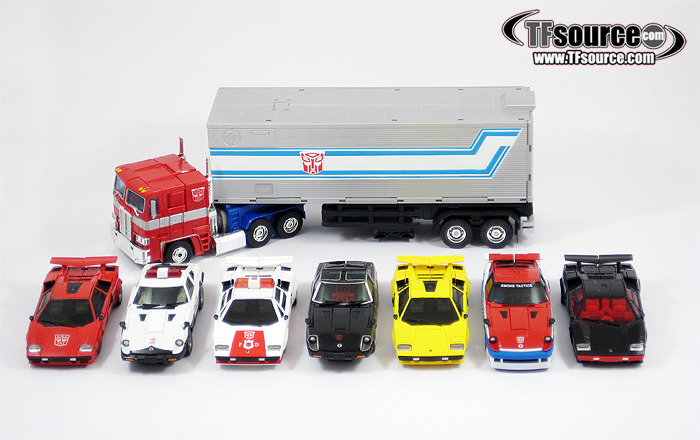 So nearly the Diaclone squad 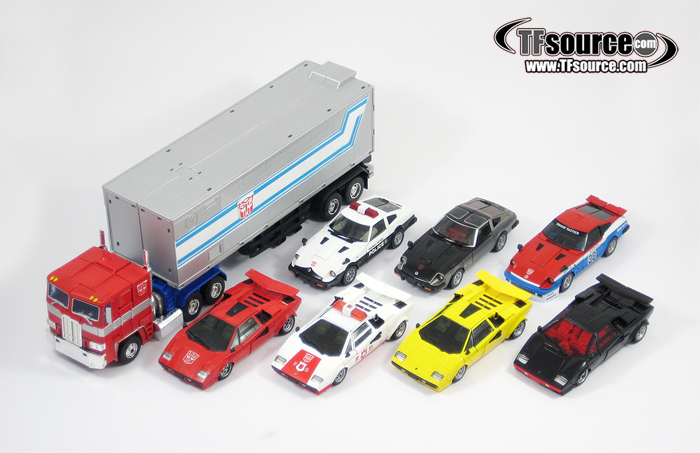 Just imagine this time next year…

Speaking of Generation 1, although this marvellous figure can exist entirely in his own universe as a standalone tribute to a different generation, he can also slip into a current G1 Masterpiece display with relative ease. As a display group, Autobot cars were always most conducive to the inclusion of Diaclone colours, E-Hobby recolours and even Generation 2 toys. How many G1 car collections have you seen with a G2 Sideswipe in them? We love to expand our universe, it’s why minibot collectors go mental for new discoveries, official or otherwise. 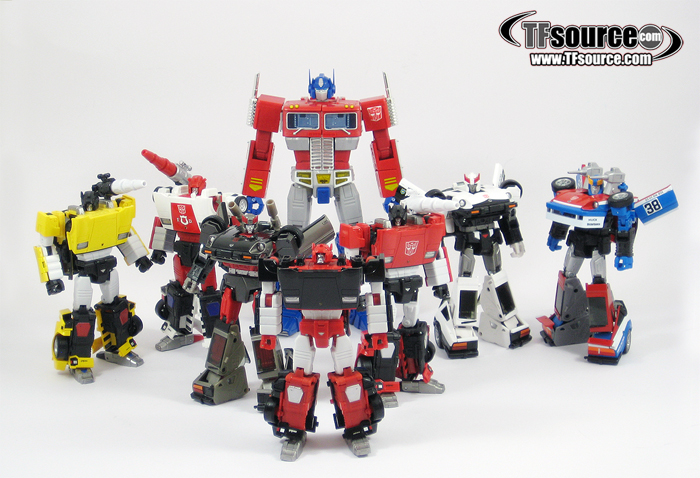 Leading the line, symbol or not 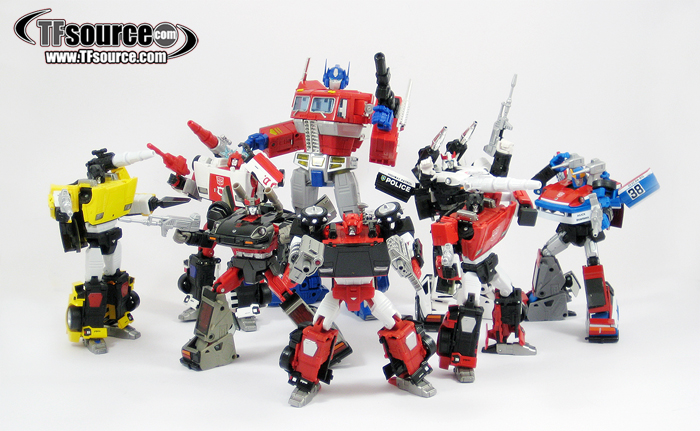 Who else would you want at the front? 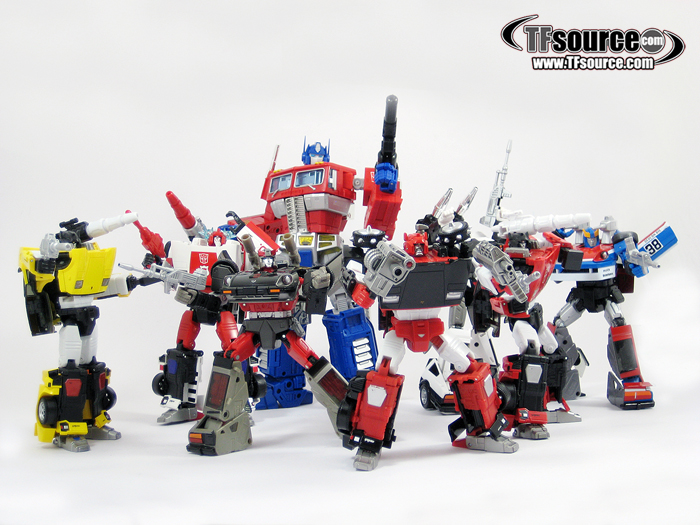 For those wondering how well G2 Lambor fits in with ‘the dream’, that complete Autobot Ark crew or the whole of the series 1 and 2 Autobot army, surely the above pictures show that if you can find a home for Tigertrack, then G2 Lambor can lead the Autobot line as well as any other. There’s no shortage of MP-12Gs sitting on collectors’ Decepticon shelves alongside Black Convoy, Black Rodimus and Soundblaster sporting a Decepticon logo either if one is so inclined, but to me that sells this character’s history and relevance massively short. 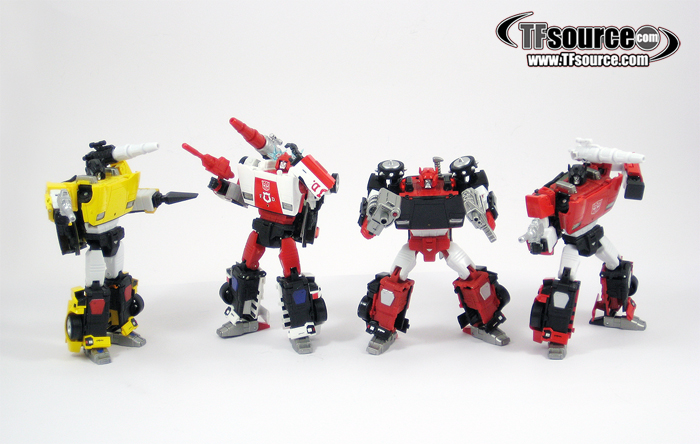 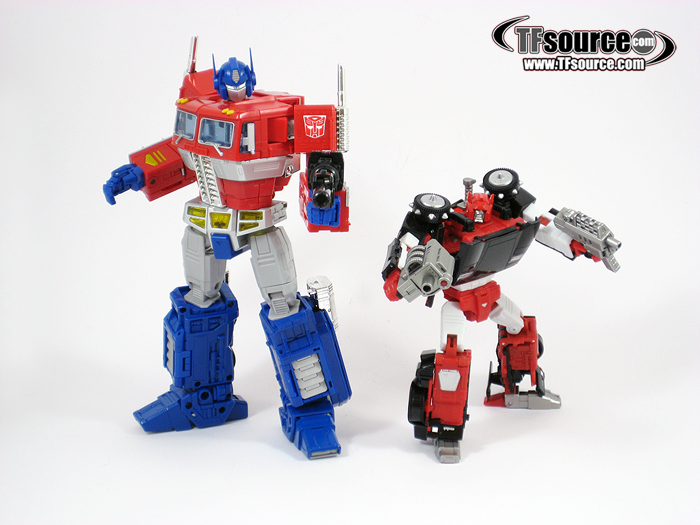 This could be Masterpiece Generation 2

G2 Sideswipe is the Autobots’ horrible little bastard warrior, completely overdone with weapons and rage most un-befitting of the vanilla Generation 1 gallery of faces. If Transformers Animated and MMC Bovis showed us anything, it’s that designers cannot be afraid to give Transformers faces that express emotion and define character. While I may not have applied the Generation 2 Autobot symbol or the garish green stickers that are a throwback to the original Hasbro G2 Sideswipe toy because of my affinity for realistic vehicle mode looks, I know who this is and who he was meant to be. I was educated on his background, I learned to appreciate what has led us to this character as a Masterpiece, to those weapons, to that face, and I was richly rewarded for it.

He needs that bandolier, though. 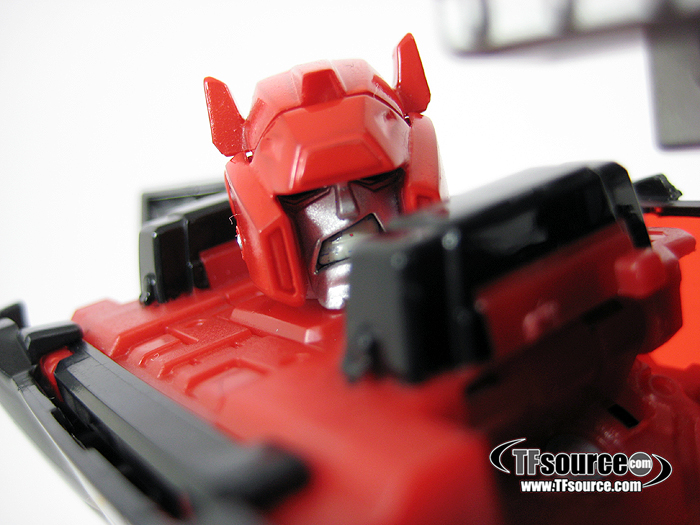 Many kind thanks to James Wilson for opening my eyes to the G2 Sideswipe character in the G2 comic, and to all those UK collectors for their enthusiasm and encouragement to keep and open this toy.