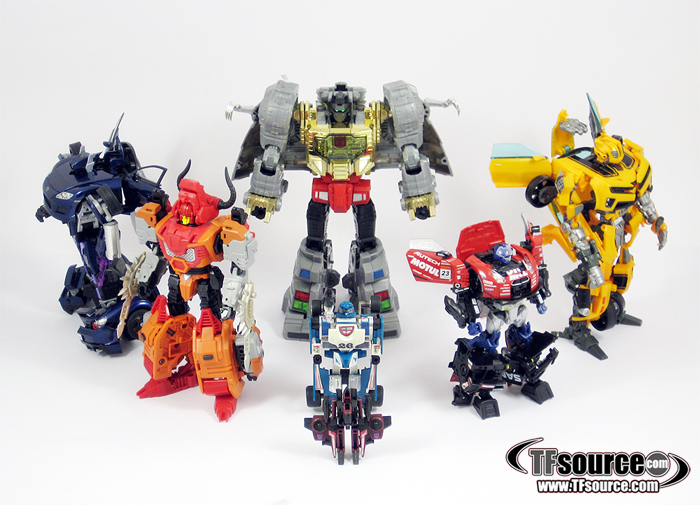 Ambassadors Part 6. You know the score by now, surely. Although I do think one thing bears repeating, our contributors that are picking their line, category, sub-category or era-specific ambassadors are not choosing one toy to represent the Transformers brand as a whole, or to turn a complete non-collector into a collector. Rather, they are choosing a toy from a particular area of Transformers to promote that area’s qualities, charm and character – as well as highlighting its shortcomings – to those of us who have never sampled that line, that category, that era. The contributors have admittedly set their own parameters on occasion, but the key thing here is we can enjoy the enthusiasm and justification of other collectors while being comfortable with the fact that our own choices would have been different. This week’s topics are Beast Wars, Cybertron, reissue exclusives and Transformers watches.

Our question, as before, was: ‘‘What toy would you choose to represent an entire toy line, if you had ONE choice, one toy you could pitch to a non-collector (and yes, I see where the confusion has arisen from) in order to sell the line?”. So, in no particular order… 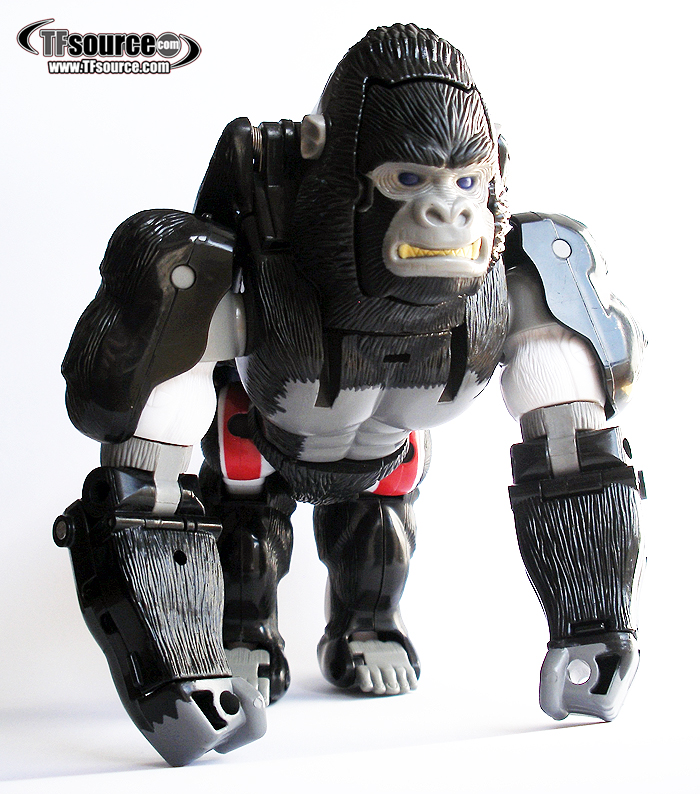 ”Defining an ambassador for this seminal chapter in the history of Transformers was hard. Very hard. Mostly because Beast Wars was such a different (for lack of a better term) beast in terms of aesthetics, gimmicks, scope and lore than anything that went before it. As a matter of fact it was so different, that it alienated a lot of older fans of the brand when it premiered in 1996, creating its very own generation of fans based solely on the brand’s own merits instead of relying on what came before.

”Based on the above, and the fact that the Transformers brand nowadays is (again) more associated with vehicular alternate modes, it was hard to find a stand-out toy that would appeal to a non-fan, while still being recognisable as a Transformers toy in both modes – which is hard, when you have to choose between alt modes based on weevils, bats, raptors, bulls and cheetahs!

”With that in mind I decided I had to go for a major character, that may be recognisable in alt mode to a casual fan (depending whether that person ever saw the acclaimed computer animated show that accompanied the toys) but definitely should invoke that very reasonable question when presented to the robot mode: ‘Is that… Optimus Prime?’ 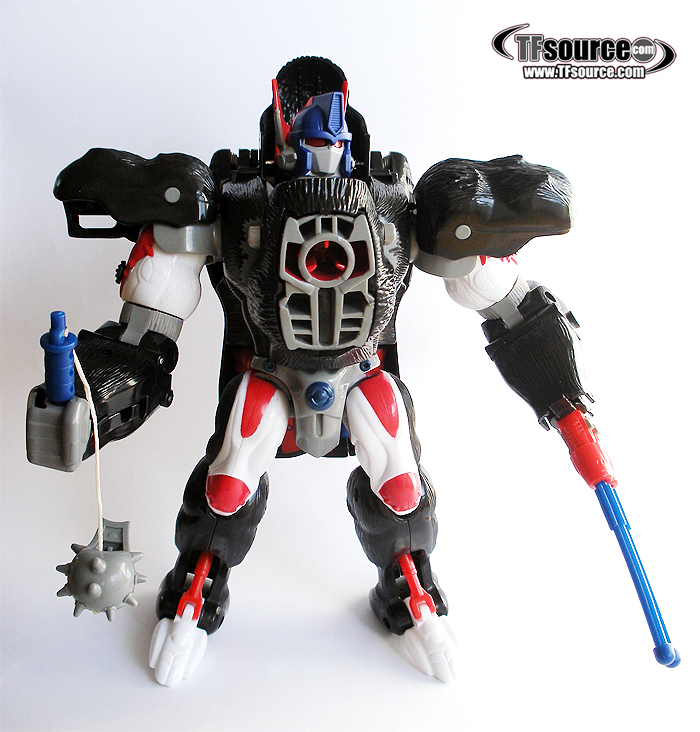 ”The colour scheme may not be classic Prime, but the head sculpt definitely is – even with the non-show accurate mouth plate – and while though it’s not THE Optimus Prime, it’s close enough for all intents and purposes.

”Perhaps somewhat simple in his transformation, Optimus Primal makes up for it with a remarkable amount of gimmicks: A mace hidden in one arm; a double-barreled flip-out launcher in the other; flip-out missiles launchers across the shoulders; a’flailing’ gear action in his arms when wielding his swords that can be reconfigured for a chest-pounding gimmick in ape mode.

”Still, he doesn’t cheat as much in his transformation as most other Beast Wars-era toys do with ‘shellforming’ (i.e. lots of big panels that merely open to reveal robot parts), plus he has the distinction of having one of the most symmetrical and well-proportioned – if not even regal – robot modes ever seen (in my humble opinion)”. 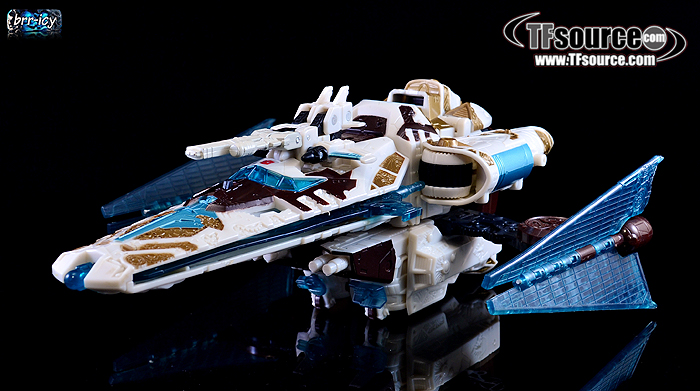 Even the name is cool

”Vector Prime is one of the 13 First Transformers created directly by Primus and he is the responsible of guarding time and space. These details are important in analysing his toy. When you look at his robot mode you can feel he is advanced and old at the same time. There are numerous details in his design that mimic gears, clock-like patterns and bolts. Even the wings/cape resemble solar panels. Furthermore, he looks like a medieval knight in shining armour with cape and sword. Which is a perfect design for one of Primus’s heralds.

”The transformation to ship mode is very simple but nonetheless the details are superb and you can see more of the cogs and gears in the cockpit area. This again resonates with all the ‘space and time’ motif around him. And also the sword can be stored there (this space doubles as his scabbard in robot mode, too) and the hilt functions as the other little wing up front. It also has a working missile at the tip of the ship”. 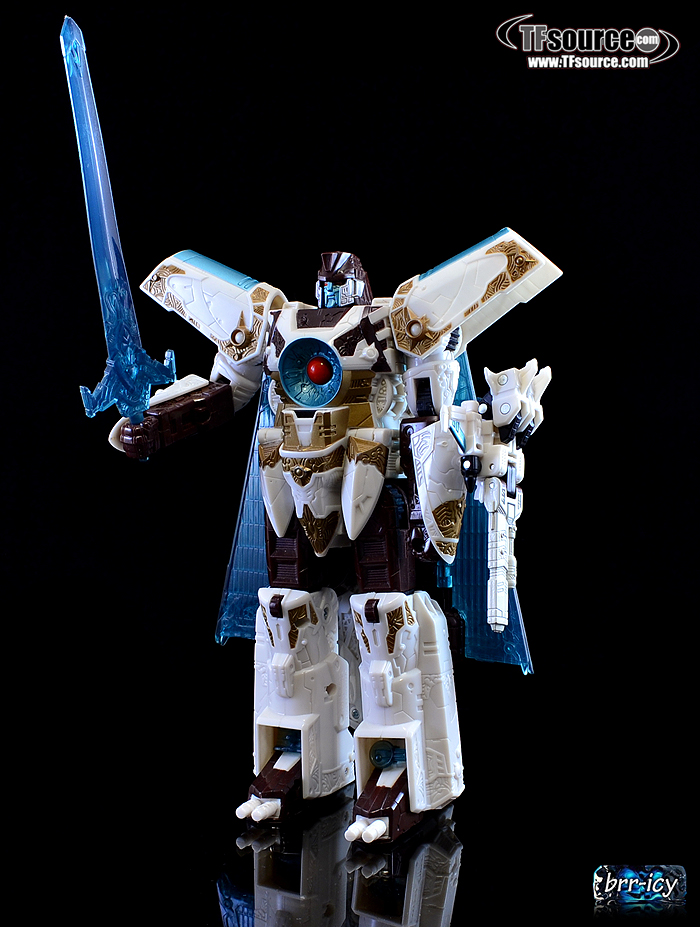 White knight of the TF community

”Vector Prime’s Cyberplanet Key is unique befitting his stature as one of the 13 First Transformers. It has the symbols of all the planets of the series. Although the Takara version Force Chip is better designed and sculpted, this Cyberkey is probably the best one of all the Hasbro designs. Putting the Cyberkey in its slot activates one of the sounds of the toy.

”He comes with the minicon Safeguard (Roots in Galaxy Force) who fits perfectly in his ship mode and works as his targetmaster in robot mode.  Even Vector Prime’s sword is beautifully done, and is named ‘Rhisling’.

”Finally, seeing Vector Prime face, does it look familiar? Yes, because it is the Autobot symbol. And alongside his ship mode, function and status as one of Primus’s direct creations it contains elements of other mythical transformer with similar origins, Marvel G1 Comics’  ‘The Last Autobot’  which is my nick since almost forever. So in a way Vector Prime is the best substitute for my obscure alter ego. So there is one of the main reasons I like this toy so much. And after all, that is one of the most powerful reasons Transformers is ingrained in most of us. The connection we feel (across time and generations) with not only the toys, but the characters, their origins, motivations and adventures”.

””How would you feel about doing a Ambassadors segment on e-Hobby reissue exclusives?’, Maz asks me last week. ‘Easy’, I think to myself, ‘I love e-Hobby reissues’, – and I do – they’re one of my all-time favourite branches of the infinite tree that is Transformer collecting. Of course, really liking something doesn’t necessarily help choose one item, all personal preference aside, which represents the whole line – particularly a line as eclectic as e-Hobby exclusives. Just trying to describe it as whole, beyond ‘reissues in alternate colour schemes’, is difficult. There are redecos  based on Diaclone and Micro Change toys, others inspired by brief events or background characters in the original cartoons, some were seen in 1980s catalogues but never before produced, a few were based on that character’s incarnations in previous toy lines, a handful were completely original to e-Hobby and then finally you’ve got Galvatron II, who was barely different from the original toy. How do you succinctly summarise that? More to the point, what single release embodies and represents all of the above?

”The answer, of course, is none of them. But in my eyes, the one that comes closest is this:

Challenge Of (finding and bloody affording) The GoBots

”The Dimension Exploration Researchers represent an interesting combination of references and homages. Initially marketed as GoBots, taking the names Bad Boy, Path Finder, Treds, Bug Bite, Small Foot and Road Ranger from Bandai/Tonka’s original GoBots line – redubbed Dimension Exploration Researchers with the names removed before release, apparently due to concerns of how Bandai would react to names previously used on their products – the colours for the first three were taken straight from the pages of an early Takara catalogue, however the others are (more or less) unprecedented. Whilst Bug Bite could have been inspired by the Mexican Iga white Bumblebee, it’s easy to forget that its existence wasn’t widely known of ten years ago – quite possibly not even by Takara employees. Small Foot on the other hand bears a striking resemblance to Estrela’s Pick-Up, a Brazilian variation of Gears in two shades of orange, which, unlike Bug Bite, had been documented online by the early 2000s. Road Ranger is an odd one; in vehicle mode there’s a strong similarity to Robots In Disguise Scourge/Car Robots Black Convoy, which could be interpreted as a nod to the original Road Ranger’s very similar colour scheme to G1 Optimus Prime/Convoy’s. Another theory is that both Small Foot and Road Ranger’s colours were based on a colouring error in the Ladybird storybook Autobot’s Lightning Strike; having grown up with that book – along with most of the Ladybird Transformer books – I’d love it to be true, but it seems unlikely.

”Debatable homages and inspirations aside, I think one thing that can be agreed on is it’s without doubt a striking set, which I’ve found routinely catches the eye of both the collector and non-collector alike, and perhaps embodies the most universal and fundamental aspect of e-Hobby exclusives: Transformers you know in colours you don’t*.

”*Except Galvatron. Galvatron ruins everything”. 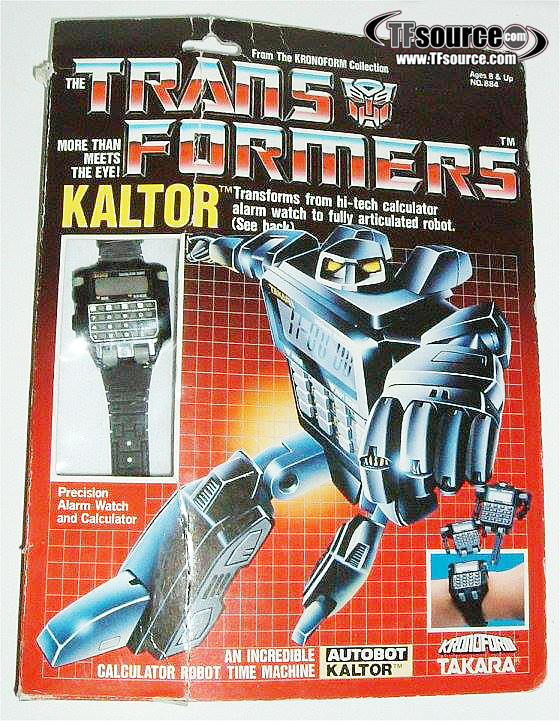 ”Not only an ambassador for pre-Transformers and Transformers, but technology in general. In the height of the LCD watch phase, Takara created some astounding time pieces that could really hold their own amongst unusually-gifted horological giants such as Casio and Citizen. Boasting wrist watches that could not only transform but had calculation capabilities, Takara went above and beyond the ‘toy’ aspect when the Watch Robo Calculator made its debut as part of the Watch-Q line, and later as part of the Transformers wing of the Kronoform Time Machines line.

”A functioning calculator watch that transforms into a robot with stalwart design indicative of the era. Seriously….what more could anyone ask for? 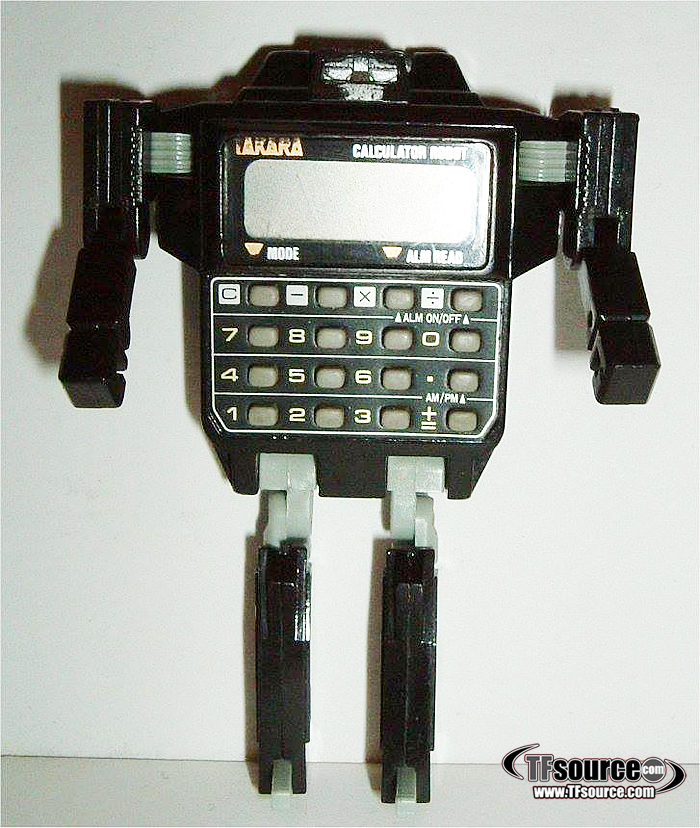 …that REALLY cannot do what it does on the box art! 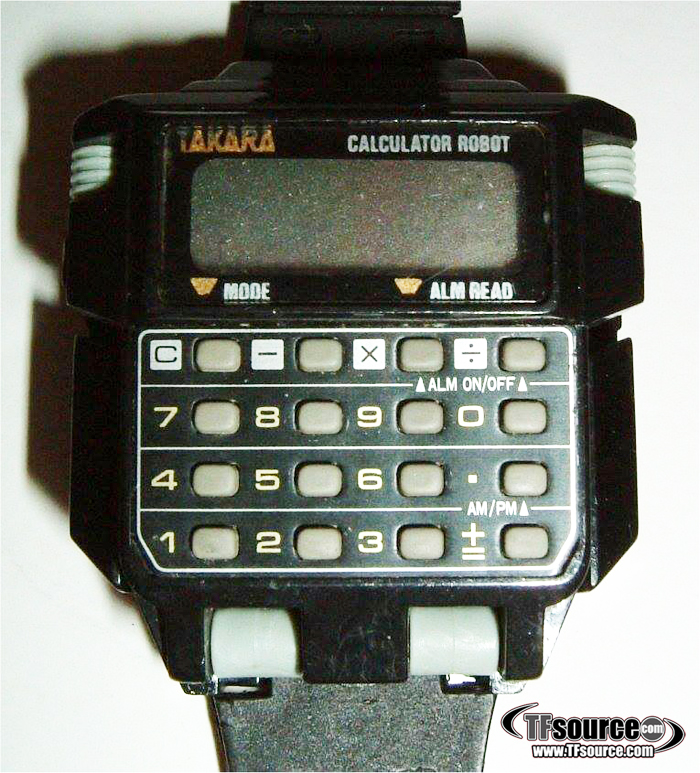 ”Clearly more words, as Maz criticised that last sentence for having ‘not been written yet’ [sic]. What a taskmaster. He himself once opened a sealed Joustra Kronoform watch to wear on a daily basis, so he’s clearly not dealing with a full deck of cards. Honestly though, not enough can be said about the concentrated quality of these little beauties. The entire Watch-Q/Kronoform line is extremely well made, putting paid to the cliche of ‘they don’t make ’em like they used to’.

”Well quite honestly they don’t. Die-cast metal and high quality plastics with supreme detailing in even the most demur of areas. If I could choose the entire line to be an ambassador I would. Kaltor wins the raffle though by being the very epitome of geek culture both then and now. an everlasting hero with designed contours that you could set your watch to. Now if only I had a battery. Is that enough words Maz?”

Yes, yes it is. That brings to a lovely end our 6 part epic on Transformers ambassadors, although obviously a few lines didn’t make it into the series. Lines such as Movie 2007 (David picked Premium Blackout), Beast Machines, Beast Wars Neo and we even considered minibots and variants, but you’ve no doubt heard enough about those already. 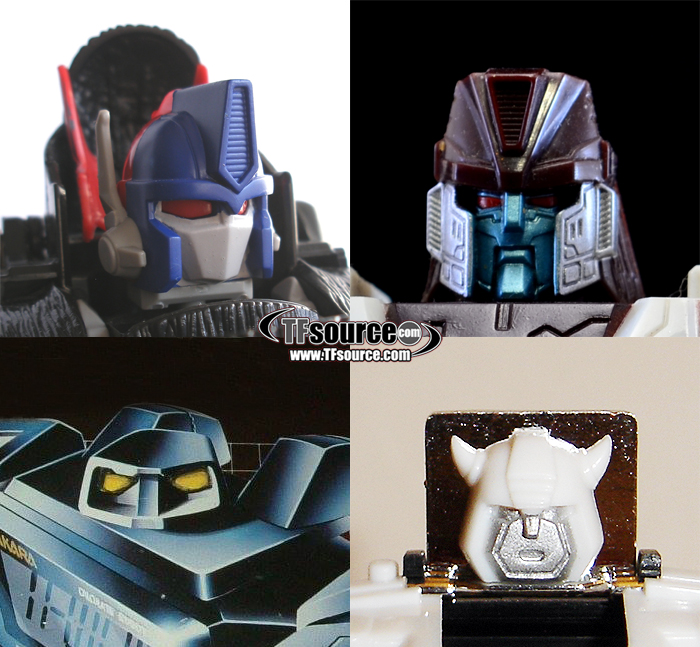 So, a great debt of gratitude is owed to our tireless contributors who gave up their time for nothing in return apart from the chance to wax lyrical about the toys that inspired them and to provide photographs. A thank you to the real ambassadors: Gordon Yip, Sid Beckett, Tony Bacala, Bryce Rutledge, Morgan Evans, Marco Salerno, Richard Brown, Dan Ghile, David Buenaño Hochman, Podleian, Steve Phiakkou, Allen Greenwood, Brandon Yap, Matt Dennett, Martin Lund, Jon Strong, Tekering, Colin Pringle, Ras and Paul Hitchens. 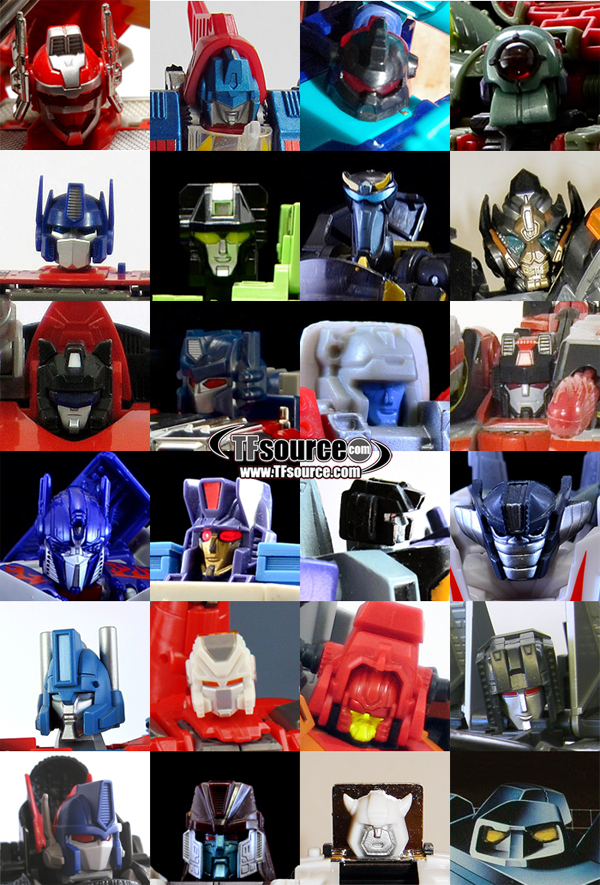