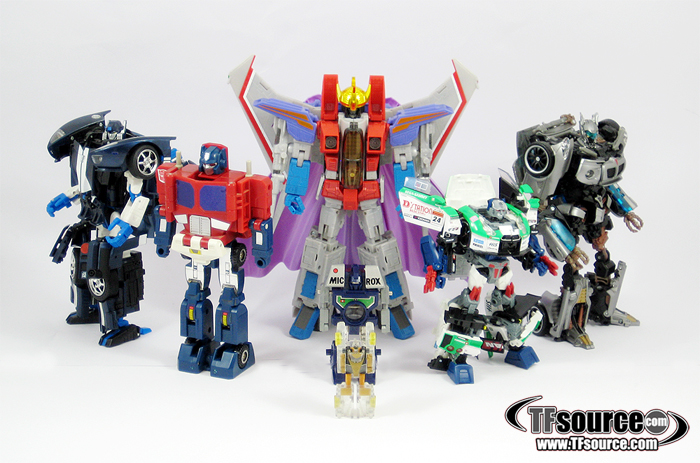 Pick one Transformers toy to represent an entire line, category or series. Simple, isn’t it? Not when you consider that your choice cannot solely reflect a personal preference but instead should embody the qualities of the whole line and give non-collectors or non-believers a way into a particular Transformers sub-category. It’s why Jetfire cannot represent Generation 1, the rest just don’t measure up! This week our contributors take on TF: Prime, Revenge of the Fallen, European Generation 1.5 and Super Collectible Figure (PVC).

Our question, as before, was: ‘‘What toy would you choose to represent an entire toy line, if you had ONE choice, one toy you could pitch to a non-collector in order to sell the line?”. So, in no particular order… 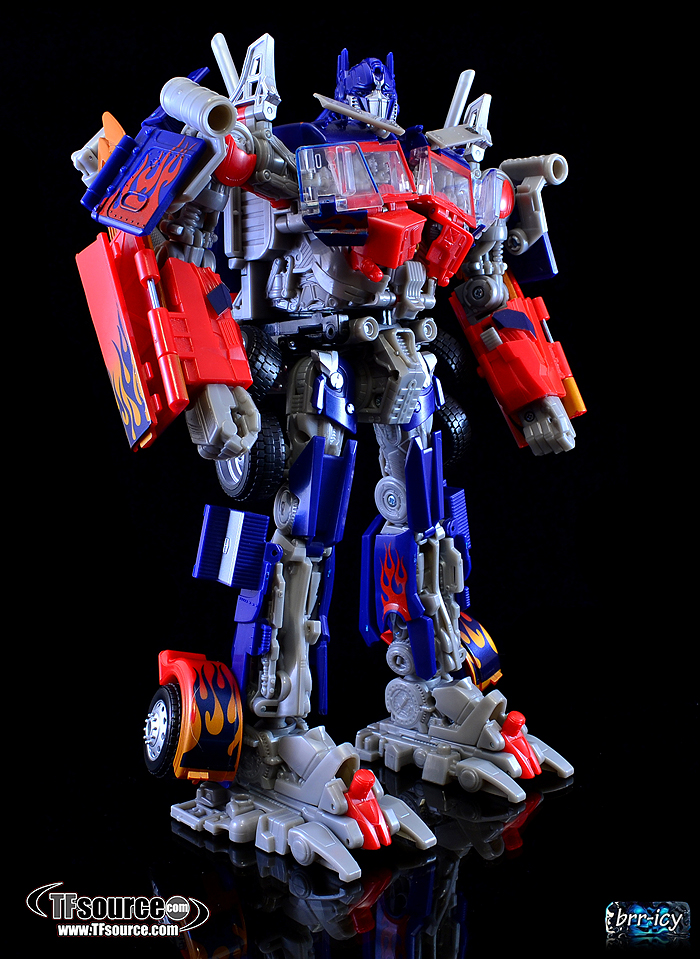 ”The second live action transformer movie is despised because of ‘his humor’ (or evident lack thereof) but there are many toys made in these years that showed a maturity and evolution not reached before or after in the movie line, toys that are no laughing matter (well, maybe Skids and Mudflap). There are many different ROTF/HFTD toys that can be used as a good way of presenting the line to a newcomer or maybe a G1 enthusiast who despises the new versions. Maybe HFTD Brawn? ROTF Skyhammer? ROTF Mindwipe? They are close, but you need one more symbolic and imposing, and you can´t get more imposing than leader class Optimus Prime. 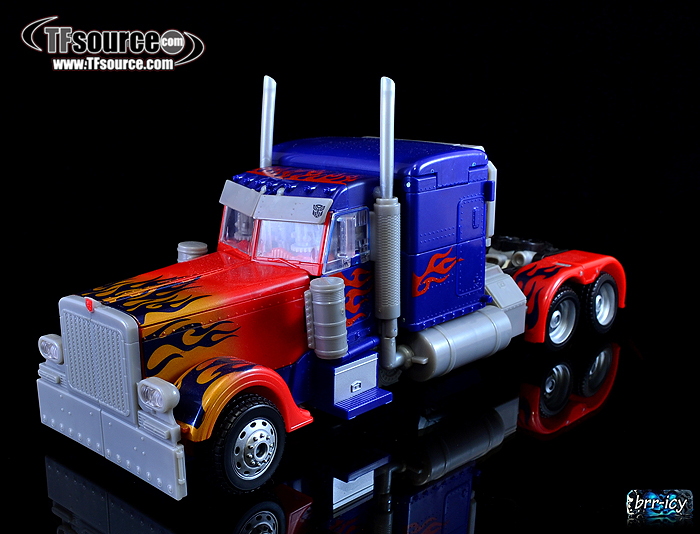 No chrome on Hasbro version 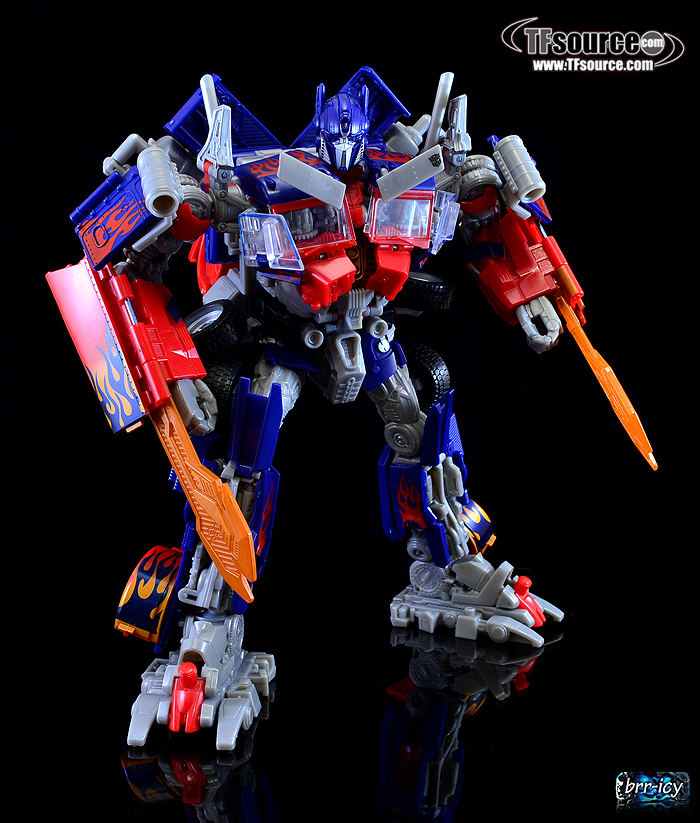 Is the Forest Fight the best Transformers battle sequence?

”In the past if you wanted to have an Optimus Prime toy there would have been like one or two per year (not counting variants). But, since the movies appeared, for every important character you have a lot of different toys depicting them and in different shapes and sizes. So in every year we have a lot of Optimus Primes. After seeing the 2007 leader class Optimus many thought it was the definitive movie toy of that character, but for ROTF appeared one of the best Optimus Prime toys in recent years, what is possibly the crown jewel of all the movie toys. This Optimus has it all, a very accurate movie depiction, an elegant and sleek shape in robot and alt mode and an enjoyable (but complex) transformation. To make matters better he doesn’t look like a walking gimmick but a real transformer.

”It also adds a lot that in ROTF we started seeing a more warrior type of Optimus Prime so now we got a toy that has the maneuverability that would make it possible for a beginner to imagine him battling the evil forces of the Decepticons (that let’s be honest, 2007 LC Optimus couldn’t). This Optimus Prime summarises everything the first TF movie trilogy (and toys) represent; a complex and innovative new direction for the franchise and a fun and stylised way of engineering Transformers toys”. 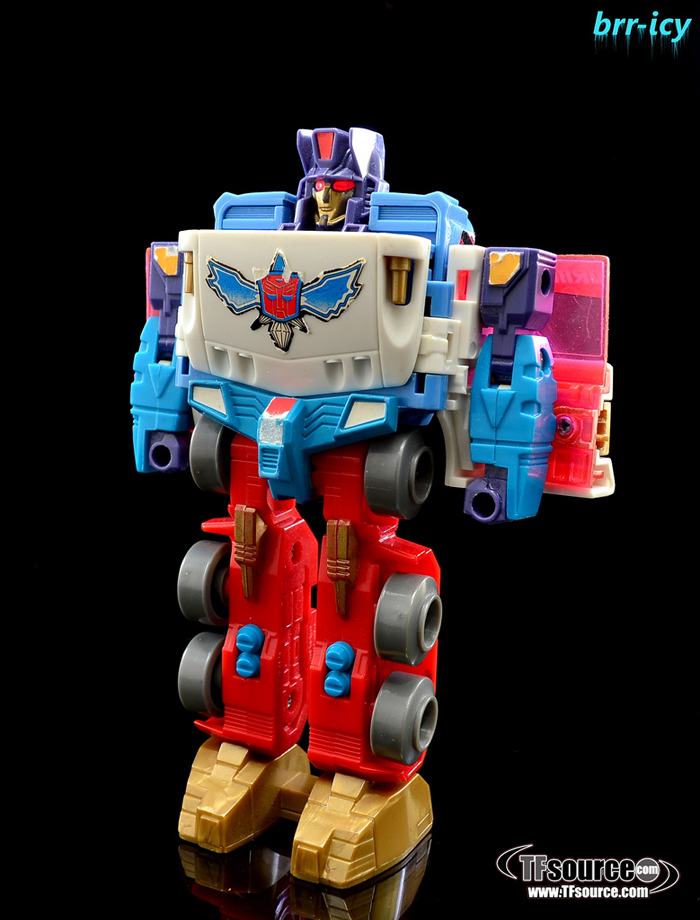 EUROPEAN GENERATION 1.5 – THUNDER CLASH
~ By Martin Lund (aka Fighbird) ~
From The Vault

”In my mind, this entry could just as easily have been labeled ‘GENERATION 1 1991 to 1993’ as G1 – from a European point of view – actually never really died here (the line’s popularity here in general was actually peaking around 1990). So while the American Transformers series had folded by 1991, the European market championed on and released a handful of unique figures in the timeframe between Generation 1 and Generation 2 lovingly referred to as ‘G1.5’.

”But with absolutely no media of any kind to back the series – expect for small pack-in catalog comics, re-runs of the 80s cartoon series on TV and localised Marvel Comics reprints – the toys released in this period basically only had themselves and their legacy to build a following on. There were no tent-pole characters; no Optimus Primes, no Megatrons, no Bumblebees and no Starscreams. 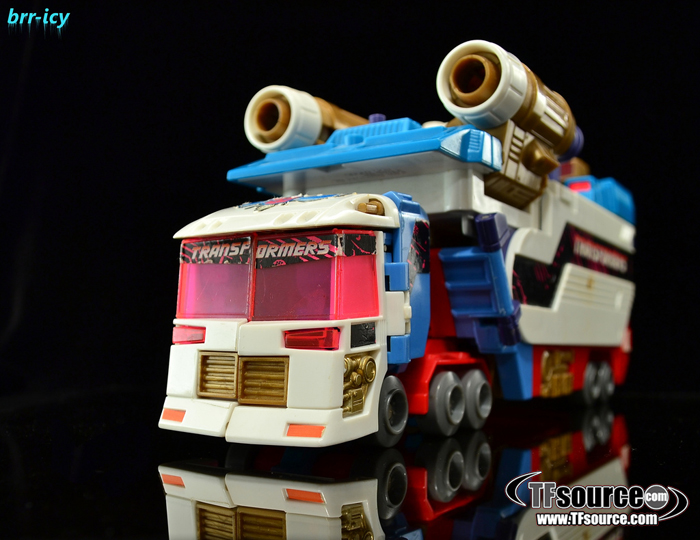 ”Bearing that in mind, there is probably not a single toy that could stand out as being an immediately recognisable character to a non-fan, so I am basing my choice solely on the merits of the toy itself – a toy that I don’t think gets a lot of mention these days (except perhaps via its BotCon 2009 homage) but may well have been at the top of many a birthday wishlist in the early 1990s: Turbomaster Thunder Clash.

”While I think a lot of other fans would write him off as being ‘too brick-like’, ‘too neon’, ‘too Cybertronian’ and ‘too obscure’ to be the best representative, remembering what went immediately before him on the toy shelves – think Powermasters, Micromasters, Pretenders, Action Masters etc. – he was actually quite a bit of a welcome return to basics for the line as a classic, non-gimmicky Transformers toy, and all that without straying too much from what kids were used to in a Transformers toy at that time. 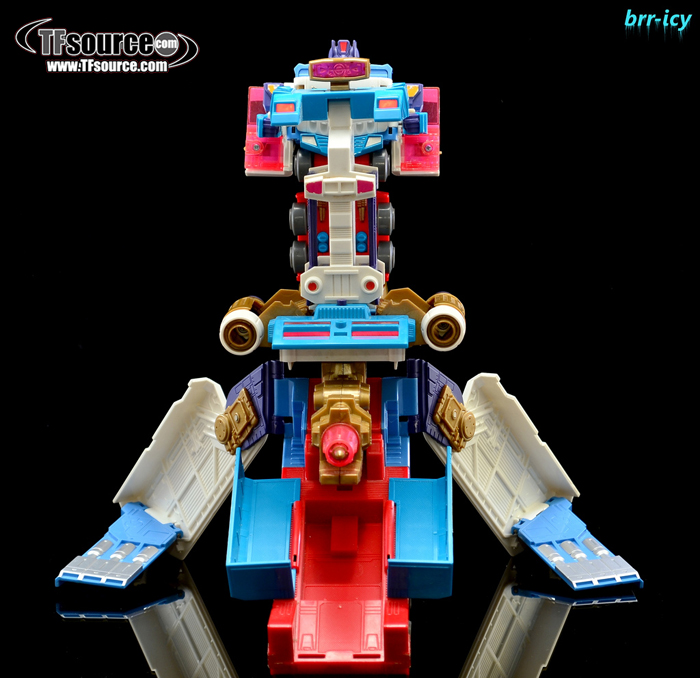 ”Thunder Clash the toy is big and colourful, has lots of play features, and is immediately recognisable as a Transformer in his design (even if one should happen to miss the big ‘TRANSFORMERS’ logos on the windshield and the sides of the trailer). His transformation is simple, intuitive and very clever in places, robot mode is solid and imposing, and the missile-launching assault tower is impressive in both size and ingenuity. In addition, the less-than-subtle Optimus Prime-esque silhouette probably also adds a lot to the immediate Transformers vibe of the toy – something that Hasbro US surely had in mind themselves with their 1996 Machine Wars interpretation of the mould, but that is a tale for another time…

”Still, to me this is still a great package – a great ambassador not only in terms of this sometimes overlooked era in Transformers history that he represents, but also in terms of that late Generation 1 post-Movie design and aesthetic that is so immediately recognisable as what it is for fans and non-fans alike – a Transformers toy”. 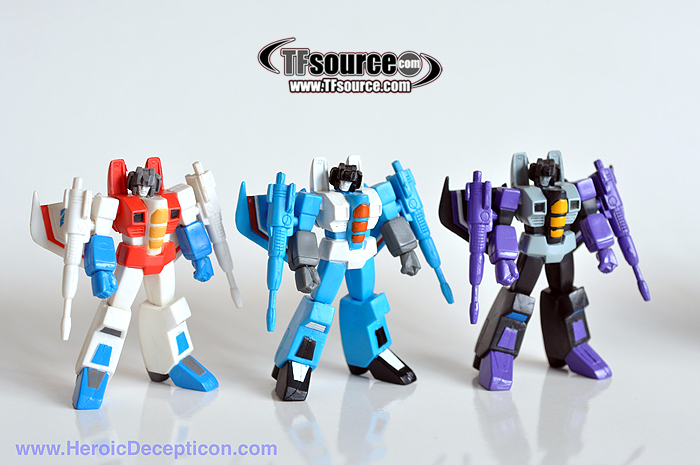 Remember when these were the biggest thing in TFs?

”The Takara Transformers Super Collectible Figure line, aka ‘Transformers SCF’ line, was released in late 2000 and consisted of 10 ‘ACTs’ of non-transformable, fully painted PVC figures, that were each about the height of a G1 mini-bot. The first 8 ACTs featured G1 characters and the last 2 ACTs featured characters from Transformers: Armada. Each figure was released in blind-packed individual boxes, where each ACT consisted of 12 figures (6 unique figures, where 6 are in colour and the other 6 in either clear or pewter). Each ACT also had 2 unique random packed ‘chase figures’ (I am guessing) at a ratio of 1 in every 10 cartons (of 12 PVC figures per carton).

”To be an ambassador, I feel that my choice must necessarily not be any of the chase figures – because these were well nigh unobtainable and very few collectors actually had any and fewer still had the entire suite of chase figures. If I could chose a chase figure, it would almost certainly be ACT 2’s Convoy with Lambor’s rocket pack and holding Megatron in gun mode. So rare is this figure that a collector refused to trade with me even when I offered him a G1 Goodbye Convoy giftset which was complete and in C8 condition. 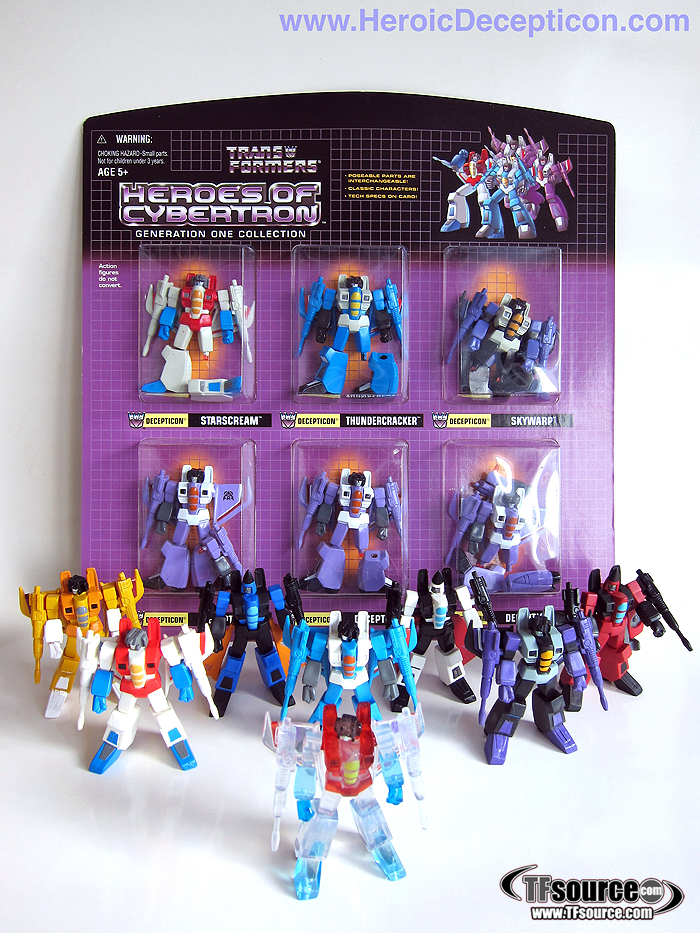 ”However, that is not my choice. My choice is not one particular character, but rather a particular mold – the seeker mould. I feel that this mould is representative of the SCF line and in fact even representative, as well, of its USA counterpart the ‘Heroes of Cybertron’ line. First, the SCF seeker mould is extremely G1 cartoon accurate and true to the original Marvel character design  sheets by Floro Dery of the seeker. It is a well balanced mould and a proportional figure. Second, 5 out of the 8 G1 ACTs had seekers as part of the ACT in one form or another and ACT 6, if we include the chase Dirge figure, even had 3 seekers in it! 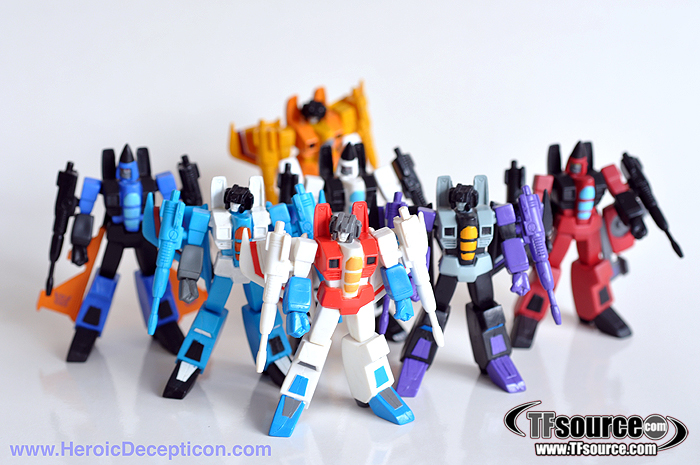 ”This is so representative of how Hasbro / Takara marketed its character in the G1 days as well – 1 mould, many different colour and /or wing variations. SCF did the same thing, there was – Starscream (ACT 1), Thundercracker (ACT 4), Skywarp (Transformers: Generations second prize Lucky Draw figure), Ramjet (ACT 6), Dirge (ACT 6 chase), Thrust (ACT 6), Ghost of Starscream (ACT 5 chase) and Coronation Starscream with crown and cape (ACT 8 chase). Under the Heroes of Cybertron banner, Hasbro would release in the USA Starscream, Thundercracker, Skywarp, Dirge and Coronation Starscream as regular releases; and Sunstorm and a six-pack seeker set as OTFCC convention exclusives.

”That is a lot of seekers. Looking at the list above, it’s easily seen that the seeker mould has seen release in all possible formats – regular release, chase figure, lucky draw figure, Japan (exclusive) release, USA and worldwide release and convention exclusive release. It is also so intertwined with Takara / Hasbro’s business model of ‘1 mould many uses’ that was evident all the way back during G1. Above all, it is also a beautifully sculpted mould and easily one of the best in the entire SCF line”. 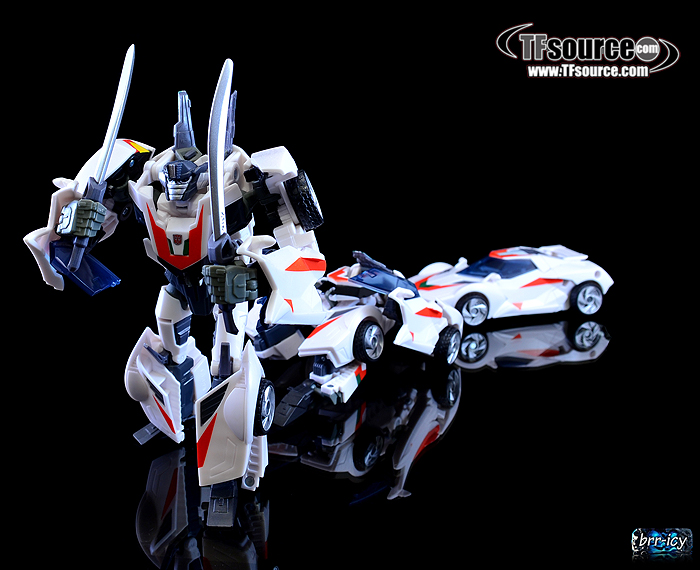 Why every collector needs 3 of every TF

”My ambassador for Prime would have to be Wheeljack. I can’t even count how many times I’ve owned and customized this mould. I thought about picking one of the first editions, but that isn’t a true ambassador as it sets the bar too high for size, build, and complexity in my opinion. So it had to be one of the main line or Beast Hunters figures. This mould is versatile for customs as well, I don’t even know how many different characters have been made successfully from it. 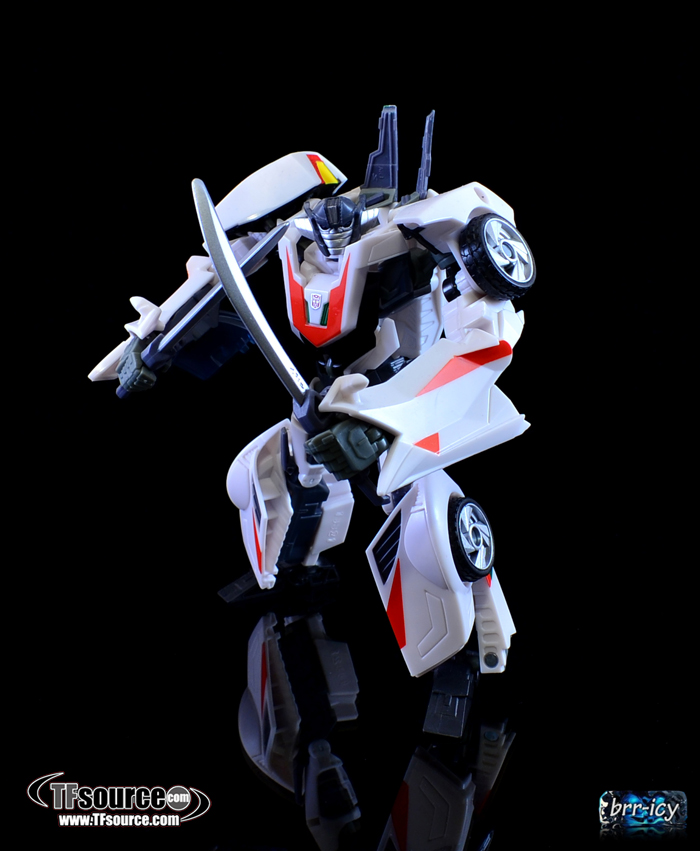 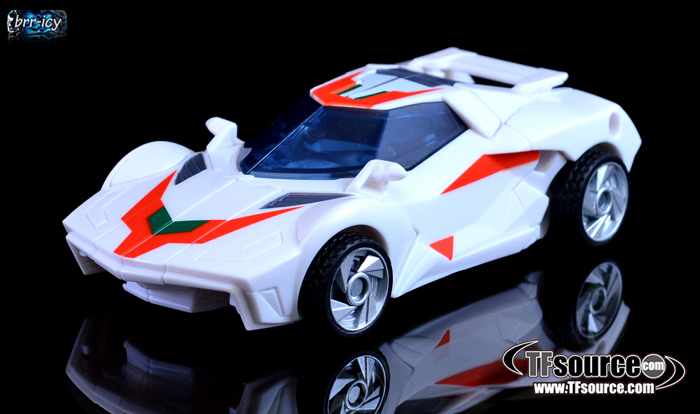 Looking more Stratos than ever

”I really like how much of the original look they kept with Wheeljack, while updating him at the same time, and the transformation is very well thought out. Like most people that like the mould, I love how the legs transform. I can’t think of another figure with anything close to that. The way the head folds out of the roof and his wings are made is also something that feels almost elegant in its simplicity and execution. Everything locks together well in both modes, he’s poseable, and the swords are a nice touch. The reason I picked it as an ambassador is that it’s a fun figure, and even with the hollowed-out parts that are pretty common across the line in general, they don’t detract from it much. He has his signature weapons, and is fairly screen accurate to boot. I thought about the Vehicon as well, but in the end, there can be only one”.

Still to come we’ll have 3rd Party, Energon, Cybertron, 2007 Movie and reissue exclusives. You can see my choices for Ambassadors Part 3 on my Square One blog. 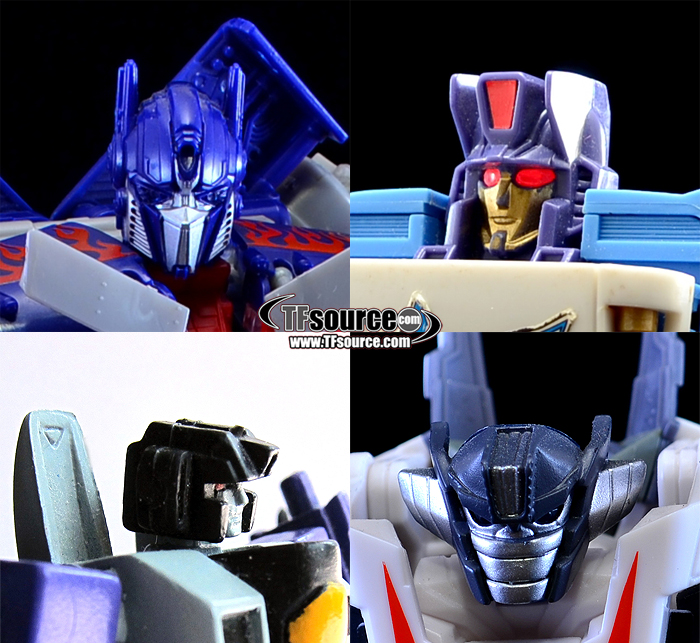 Generous thanks to Bryce Rutledge, Brandon Yap,  David Buenaño Hochman and Martin Lund for superb contributions and continuing support of Source Blog, thank you so much guys.