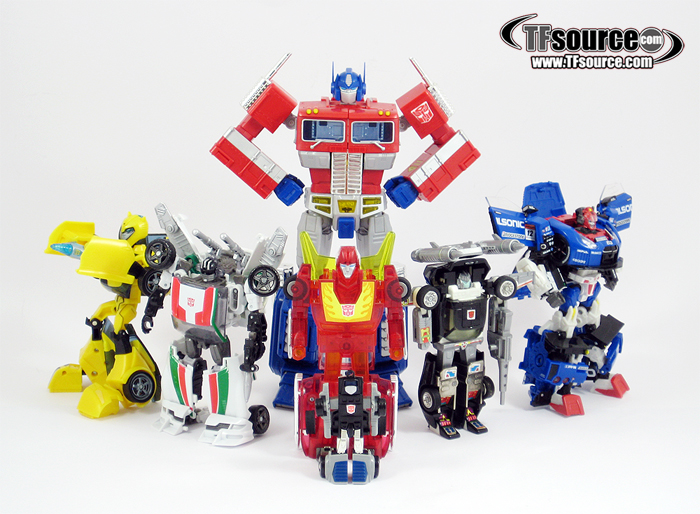 A lot of time has been spent discussing the rarest or most expensive members of Transformers categories and sub-lines in this column, but this week I’ve asked some of the most respected and knowledgeable collectors in the community to nominate one toy from their assigned category that they believe best represents that toy line. One toy that, in their opinion, embodies a category’s best qualities, essence and could conceivably be used to sell the toy line to a non-believer or non-collector.

Opinions are subjective, and some Transformers categories could boast multiple ‘ambassadors’, but opinion is exactly what I’m interested in this week, that of a select few people whose word I would trust and value. Even if you disagree, there’s much to be gained from listening to a well-educated Transformers collector share their passion for a particular toy and line. The question they were asked was as follows:

“What toy would you choose to represent an entire toy line, if you had ONE choice, one toy you could pitch to a non-collector in order to sell the line?”. So, in no particular order… 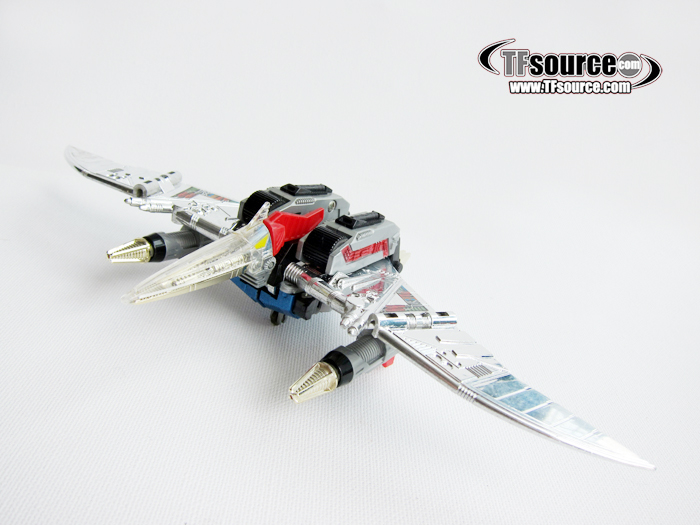 Rounded corners are for kids

“Even for those who are not familiar with Transformers, the Diaclone Pteranodon is an excellent toy.  It looks great in dino mode and in robot mode.  It has room on its back for a Diaclone driver to sit,  comes with shooting missiles from the launcher and gold chromed sword as a weapon.  The beak on the dino mode can open and close, the box art is excellent and the overall packaging looks compact and elegant. 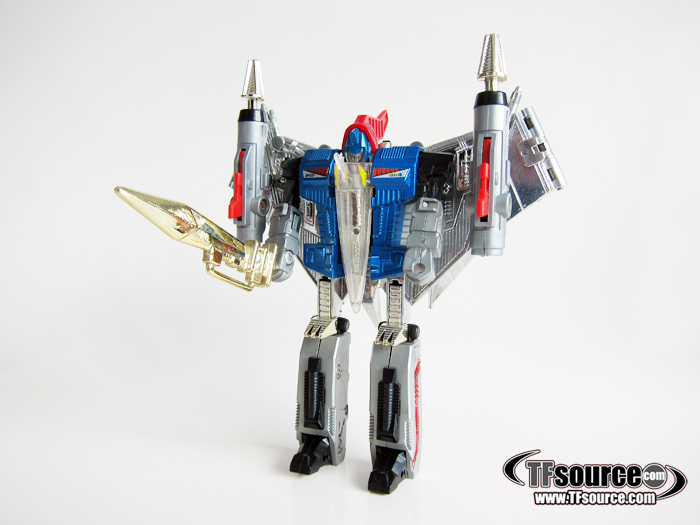 “For those familiar with the Transformers Swoop and already love it (like myself years before I got the Diaclone version), you will be in for a treat with this toy.  First, the Diaclone version sports a blue chest and gold chromed beak, which more closely resemble how the character looked in the original G1 Transformers cartoon.  Improvements over the Transformers version included gold chromed missiles and sword, gold chromed dinosaur feet and lower beak and working wheels inside the robot chest and above the dinosaur feet.  Aesthetically, the Diaclone version also sports two key enhancements including a sharper beak and wing tips that had been rounded off in the Transformers version.  With the addition of spring loaded launchers that actually launch the missiles quite far as well, it was very clear to me years ago based on all the factors mentioned which version of the toy was superior. 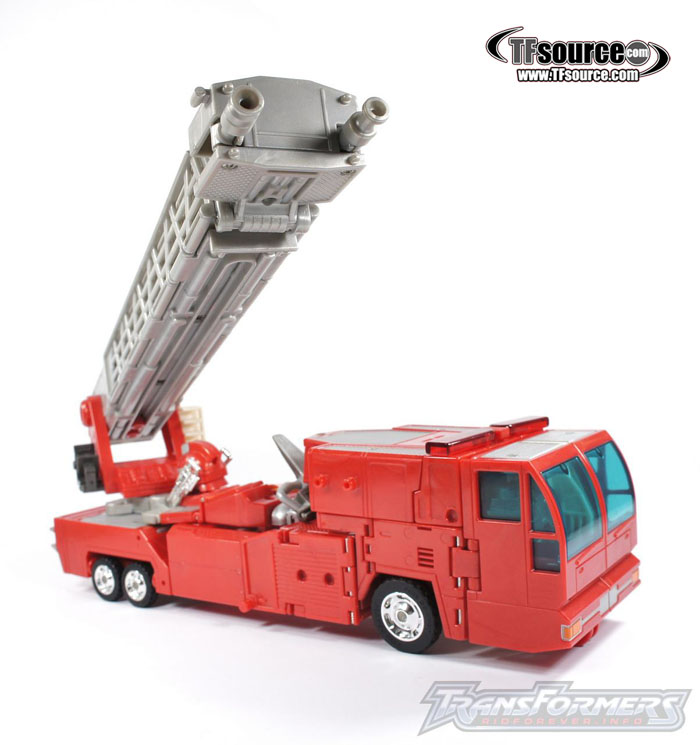 “In the year 2000, Transformers as a brand was getting ready to explode into what it is today. It hadn’t really stopped since 1984, but it definitely had its peaks and valleys. Beast Wars was wrapping up, Beast Machines was starting, and a lot of soon-to-be collectors were coming back and paying attention for the first time since they were kids. Many appreciated Beast Wars, but its connection to G1 in the show is what cemented the deal. The desire for a return to the classic format, Autobots and Decepticons, robots in disguise as vehicles, was building. As Hasbro was transitioning from Beast Wars into Beast Machines, Japan had another idea – Car Robots. A standalone line for the Japanese market, it was a hybrid show celebrating 15 years of the brand in Japan. It featured all new vehicle based figures using the technology Beast Wars toys had enjoyed over the previous 5 years. It brought back classic G1 molds such as the Combaticons, collected underused Beast era toys, and even utilized some G2 molds as well. The crown jewel of that mix matched offering was Super Fire Convoy, or to the West – Optimus Prime. 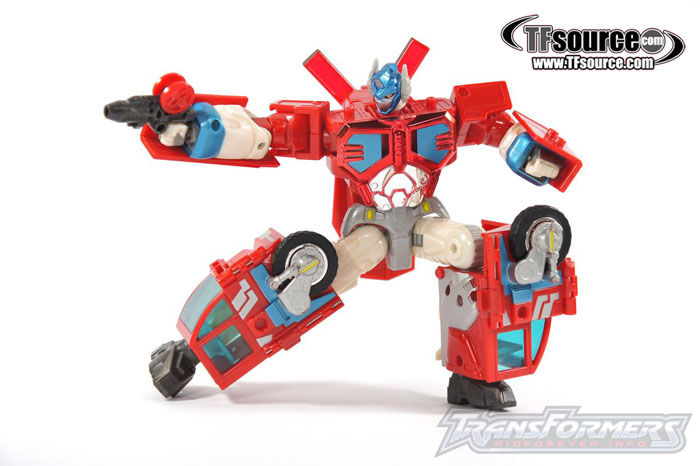 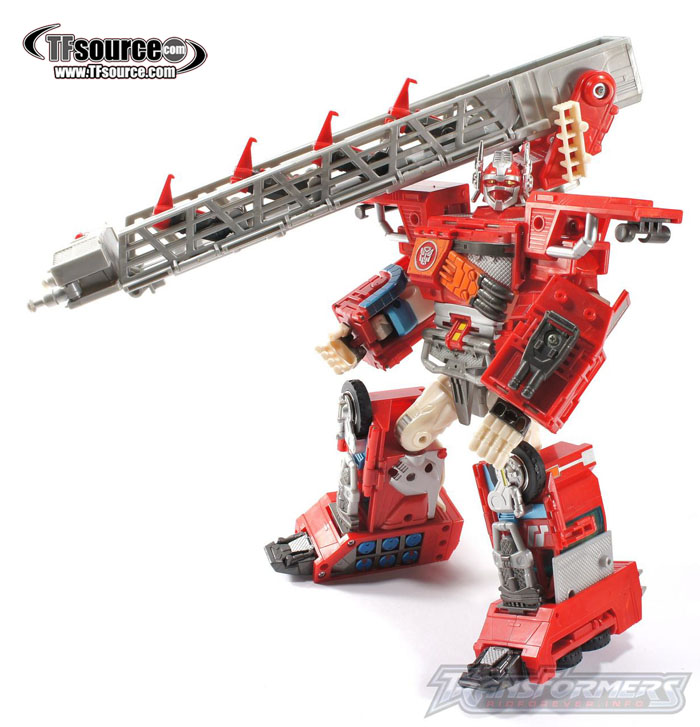 Putting the Super in SFC

“In this version of Transformers, Optimus took on the form of a fire truck, a standard Japanese model of course. It was large, a true leader class. Heavy mold, no hollow parts as we are used to today. In both modes, it accomplished its goal. Perfect vehicle, only its armor head showing out of place. In robot mode, he captured and updated the iconic Optimus Prime look. He may have started the faux chest on Prime we’re seeing more of lately, but it worked. The figure had rubber tyres, vac metal chrome, metallic paint, and a full range of articulation that would be hard to match in the 14 years since. On top of all this, the ‘trailer’ as we are used to with Prime figures – actually had a purpose. It became a base station OR a full set of snap on armor to the base figure, a-la Ultra Magnus from G1 – but with the ability to pose and move. This was the SUPER in Super Fire Convoy. His fire truck ladder became a shoulder mounted canon. It was truly an epic piece of Transformers engineering. Oh, and BTW – it fully combined with a leader class Ultra Magnus toy to form God Fire Convoy (Omega Prime), another fully articulated, even larger, Optimus-based design. If that doesn’t sell you, I don’t know what can!”. 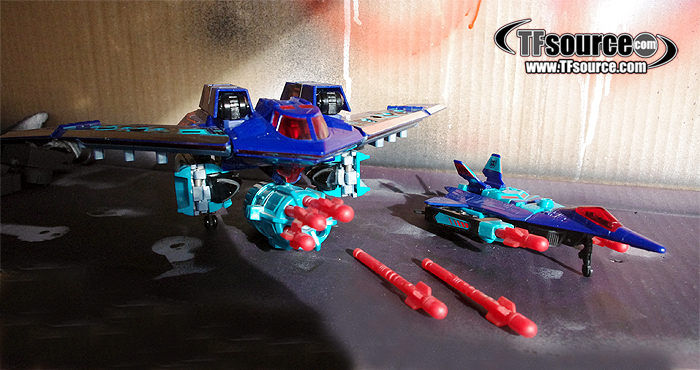 “For many fans, G2 is an odd beast.  It was the awkward adolescent stage of the Transformers history, and those growing pains set the stage for the teenage coming of age that was Beast Wars, through ball joints and increased pose-ability.  Some of these joints worked well, others less so (we’re looking at you and your rubber bands, Laser Rods).

“In a short-lived toy-line – populated by repaints of G1 toys, several small and more plastic feeling toys, and gaudy colourations – Dreadwing and Smokescreen are that rare beast of a large Decepticon toy, with a whole new mould at that.  The function and interaction between the two figures in this set (and trust me, they are a set) is above reproach, rivaling both the Duocons and the mighty Overlord. 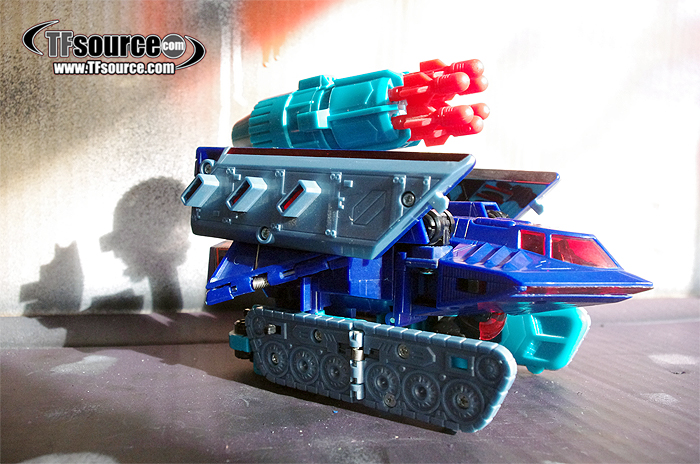 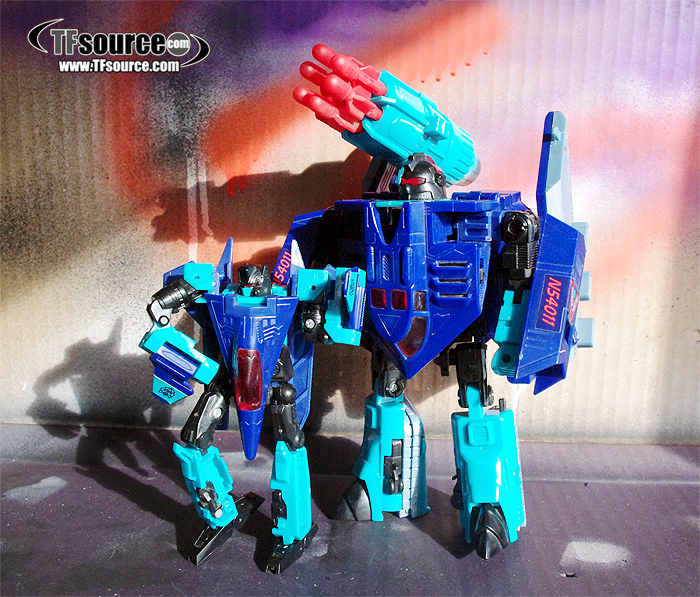 “These figures both have robot modes and jet modes, yet Dreadwing is also a Triple Changer (okay, a sort of unconvincing tank mode lets it down a bit), and they combine into a super jet mode.  A Stealth Bomber mode at that, with plenty of firepower – 14 missiles! Play value aside, what really made these figures was the pose-ability.  Smokescreen has 13 traditional action figure points of articulation, and is one of the first TF figures to comfortably hold his gun two handed in a convincing manner.  The transformation is complex yet intuitive and has been used on several figures since, and that’s just the small figure.

“Dreadwing is so imposing it is no wonder they considered re-releasing him as Megatron (pre-dating Don Fig’s design by 18 years), but I feel he may work better as an over-sized enforcer for Starscream as seen in Japan’s Beast Wars II. This gem often gets over-shadowed by the amazing Laser Prime mould (later used as Scourge from RID), but I feel this just pips Prime to the post, not only as a great ambassador for the heights of the G2 line; but as a great Transformer.  It should come as no surprise to anyone that they were still re-releasing this amazing figure 10 years after its debut”. 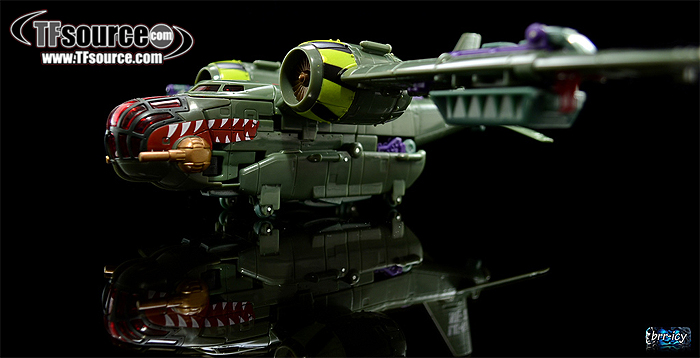 “There are a lot of great Classics molds, it was pretty difficult to pick just one, especially an unmodded or upgraded one. In the end, I had to go with Reveal the Shield Lugnut. This figure is absolutely fantastic in every way. The first thing I noticed out of the box was just how big his wingspan was. He’s pretty close to a foot wide in jet mode. He was one of the few figures to really use the C-clip weapons that were abundant in the first Generations and Reveal the Shield lines. I think he has a grand total of twenty-five clip points. In this mode, he has a missile launcher in the tail, rotating front guns, and landing flaps that can be moved. 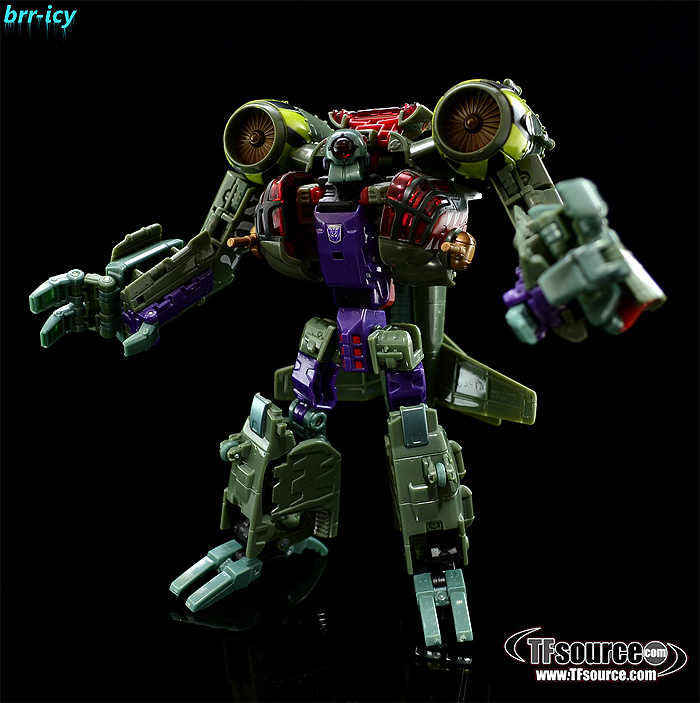 Legacy of TF Animated in his face

“The transformation is fun and clever. I was amazed with how the wings collapsed into the decently thick and well-articulated arms. The way the torso compacts is very well done with a nice head reveal near the end. He has all the articulation you would want, plus some. The middle knuckle is fused on the hand, but the fingers still move independently at the tips, even the lower jaw is posable. In both arms they have added a spring loaded Punch Of Kill Everything or P.O.K.E. for short. The missile launcher is pretty useless in this mode, which is my only real issue with it”. 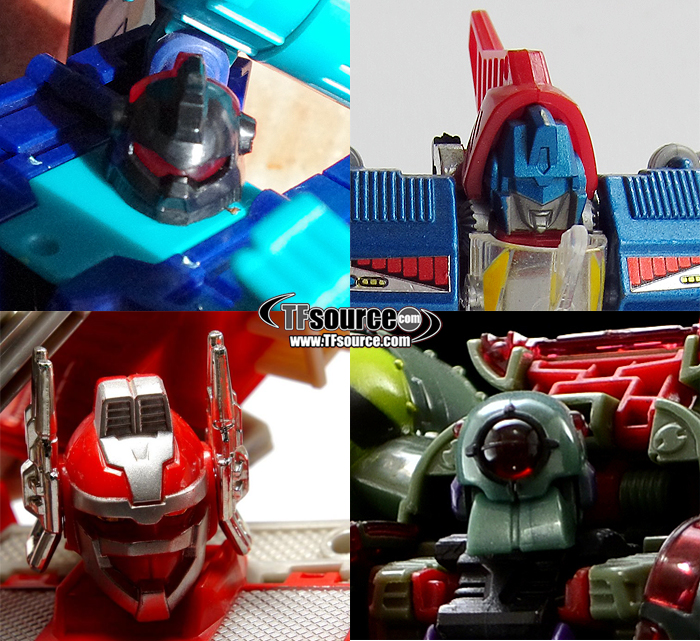 My deepest thanks to Bryce Rutledge, Tony Bacala, Sid Beckett, Gordon Yip and Brandon Yap for this week’s verbal and photographic gems.